The 1984 TV anime Heavy Metal L-Gaim was one of those shows I had a persistent desire in seeing. It is one of the first shows that now legendary auteur (and handsome man), Mamoru Nagano, got to show his prowess in designing characters, giant robots, space ships, and an entire galactic setting. The whole world of L-Gaim oozes touches of his Star Wars by way of a fashion designer's view of medieval Europe style. Working with Nagano was the indomitable Gundam creator, Yoshiyuki Tomino, who directed the series for 54 episodes of pure adequacy. It is said that Nagano was disappointed with the show and would eventually rework a lot of its ideas into the manga series The Five Star Stories. Likewise many elements of L-Gaim made it into Tomino's own seminal classic, Mobile Suit Zeta Gundam. In that sense it manages to keep a small claim to fame, but recently I have been mulling over its place in the great giant robot pantheon.

The series has received a fair number of appearances in crossover media like the Super Robot Wars and has its own place in modern action figure lines like Robot Damashii so it's definitely not obscure or forgotten. It is this low key yet continuous interest that seemed to influence mecha fans into taking the time to fansub the entire series in lieu of an official English release. Curiosity and diligence keeps all of us involved and sometimes leads us to hidden gems of the past. Sadly I can't really say that L-Gaim is a under appreciated treasure, so much as it was just... filler.

I could do the usual thing of describing every 80's mecha show with the breathless talk of space opera epics lost on today's masses... or I could tell you how the first scene in the show is that of a young woman running toward the camera in such a way so you can see her panties. The same woman would fall in love with dashing (and slightly bland) main character, Daba Myroad who flexes his perfectly tanned muscles in a bid to defeat the malevolent galactic dictator, Poseidol, and revive the royal lineage that was taken from him years ago. Later an enemy soldier would fall madly in love with him in the span of about 30 seconds and eventually defect to his side. Then at some point Daba feels up his fairy friend but it's ok because they make up later on. And let's not even get into Gavlet Gablae, the requisite proto-enemy (as Roger Ebert would say) to our heroes and their cause.

Don't get me wrong though, in broad strokes the show is still full of laser guns and laser swords (and giant robots wielding bigger versions of both) fighting from planet to planet in a way that serves as comfort food for sci-fi fans. However I cannot deny that what stood out to me was not the mecha designs nor Mamoru Nagano's good intentions, but Yoshiyuki Tomino's ability to have goofy but somewhat baffling fun with what I'm sure many people thought was going to be a mostly straight faced drama. The man is known for moving between the two extremes of wackiness and drama with such skillful abruptness that one cannot help but behold his power. In the end the show is forever stuck in my head as an experience that was neither amazing nor outright disappointing. Which brings me to my main point: L-Gaim is a series that exists today as a way to fill space. It's always time for L-Gaim because L-Gaim is always ready as an 80's mecha show that enough people remember to make it worth putting effort into merchandising.

What does it all mean? Well... let's look at a perfect example of L-Gaim filler.

In 2001, Banpresto released a series of UFO catcher prizes called Heavy Metal L-Gaim Diecast Figure. Pictured here is the L-Gaim Mk. II on the card. Note the little rope loop where the game claw is supposed to grab on. 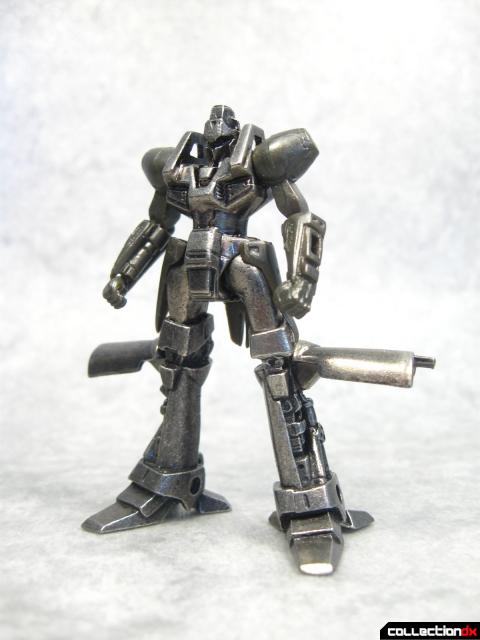 I received one of these as a gift from my friend and fellow Volks enthusiast, SpaceRunaway. With a little help from the internet I was able to confirm exactly when and where this toy came from and as a semi-fan the show I feel compelled to review it.

Here is the titular L-Gaim, which would later be called the L-Gaim Mk I after Daba gets his fancy mid-series upgrade. The base figure stands a little over two and a half inches tall and is mostly diecast metal with the arms and skirt armor being done in dark silver plastic. 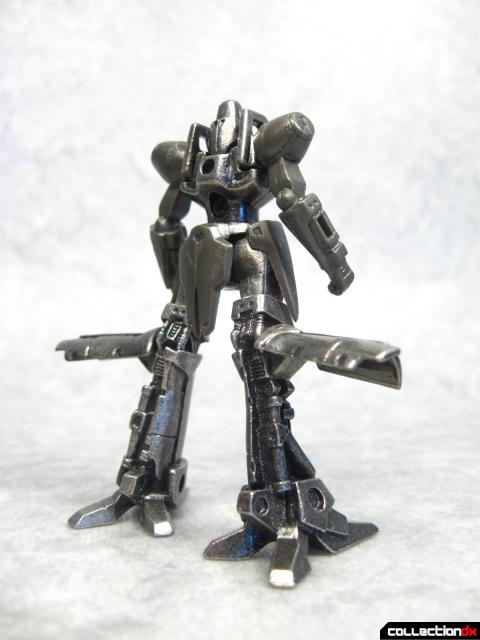 Overall the L-Gaim has a nice polished metal finish and is a pleasingly accurate representation of the heroic suit-of-armor style machine. The robots of this show are called "Heavy Metals" so it is only fitting to make a few toys out of diecast. It also seems to have that "table top gaming" vibe to it. 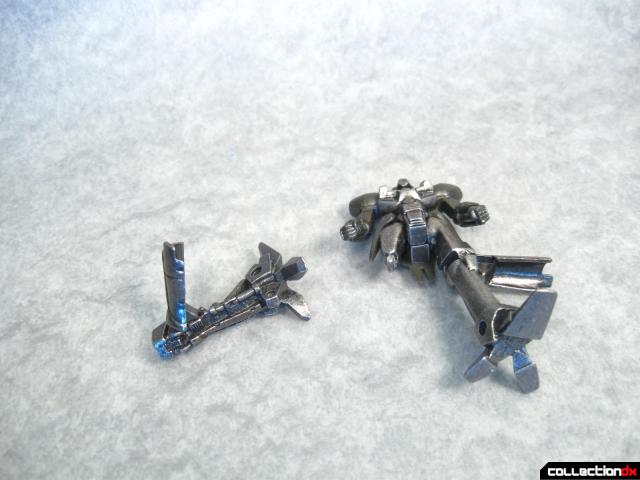 Unfortunately one of its legs came unglued from the joint so I have to be careful when picking it up. I could fix it but it stays together well enough when left alone on the shelf. Handmade Heavy Metals are very powerful but require regular maintenance. 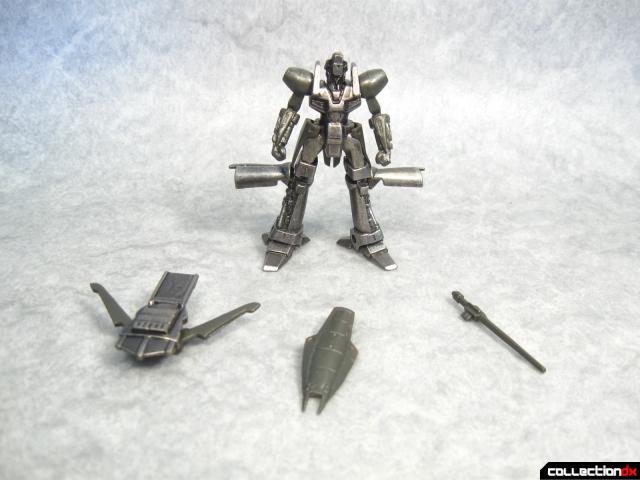 The figure comes with all of the L-Gaim's iconic equipment that it is usually seen wielding. I mean all of this stuff is in the opening so it must be important right? You get the arm mounted power launcher, that backpack that lets it fly better, and a binder (shield). All of these things peg neatly onto the figure and give it that complete "the way you remember it from promo material" look. 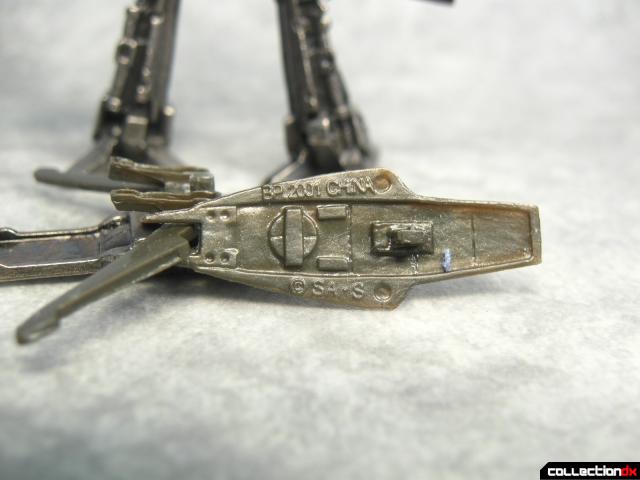 The back of the binder even has some molded detail showing the s-mine throwing weapon and faux mounting brackets. Also shown is the scant copyright information showing that this is a BP (Banpresto) product licensed from SA (Sotsu Agency) and Sunrise. I always assumed they call shields "binders" because they usually hold extra equipment and weapons like how Nagano's binder holds sketches of a girl character's preferred lingerie. 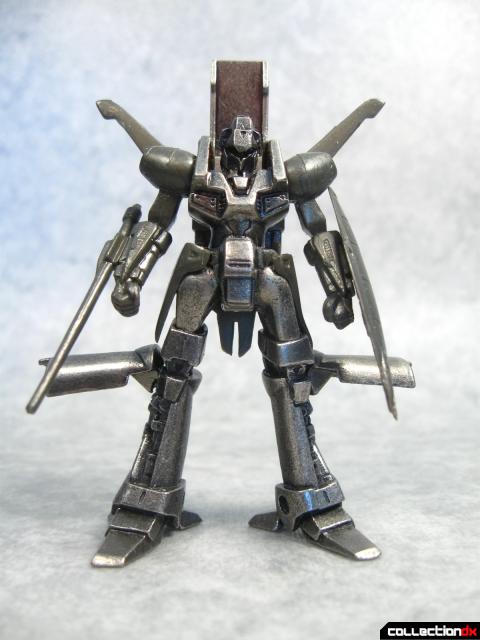 The fully equipped L-Gaim has a pleasingly symmetrical look that feels balanced and steady. Its knightly appearance and heroic proportions instantly peg it as the main mecha. 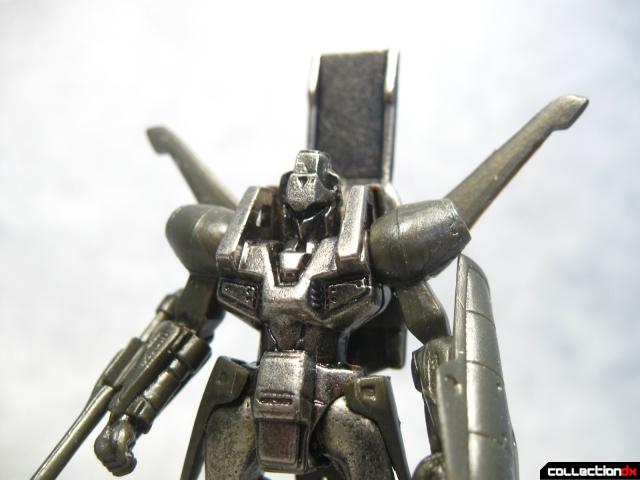 It is a remarkably detailed figure for its size. 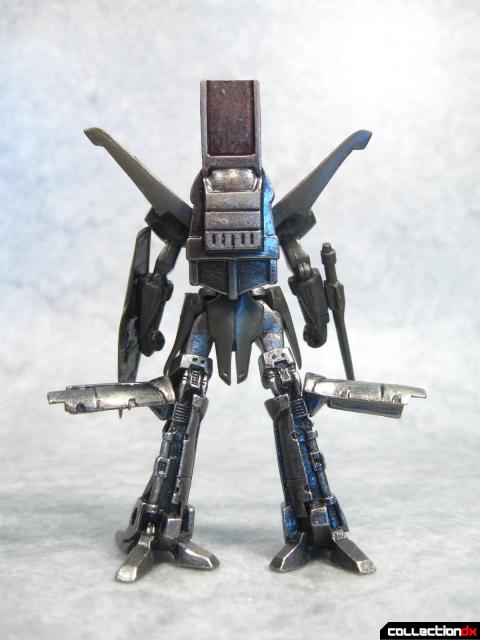 Front to back it's L-Gaim all the time. I do appreciate that unlike most mecha shows, the Heavy Metals all have long heel struts for added stability. Rarely will an L-Gaim fall down on its gaim. 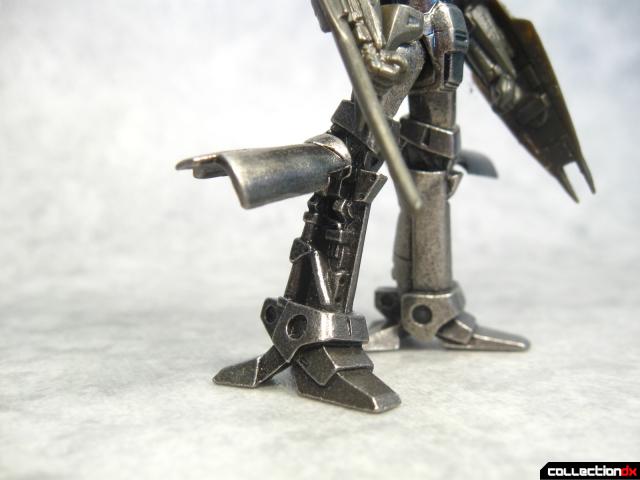 Its signature opening leg panels are faithfully represented here with a fair amount of mechanical detailing underneath. In the show these panels would open up and shoot jets of air out (from some unseen vents) to propel the L-Gaim into the air because every "Real Robot" fights on the bounce just as Heinlein intended. 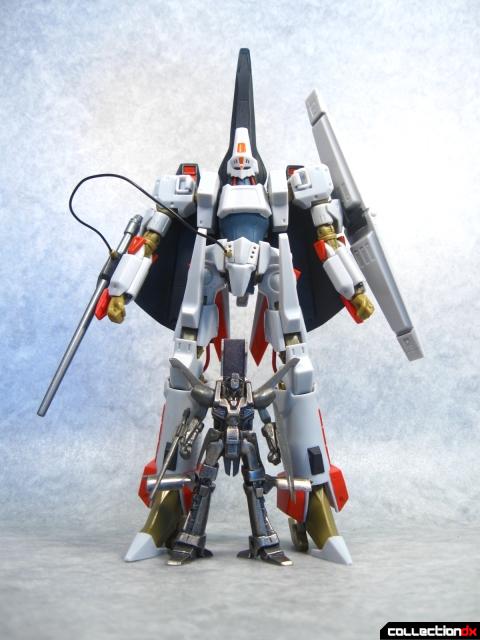 The original L-Gaim enjoys a good stretch of success against Poseidol's army until our heroes manage to both steal the experimental Amon Duule "Stack" Heavy Metal and convince its main designer to defect to their side all in the same episode. From there the "Stack" is rebuilt into the L-Gaim Mk. II and the viewers get to enjoy a new opening title sequence with the peppy "Wind of No Reply" song.

Incidentally, the one thing I'm glad the tiny L-Gaim lacks is one of those darn energy cables that go from the power launcher to the Heavy Metal's crotch. I get the whole idea of rocking robots plugging in their guitar analog weapons into a groin mounted amp for maximum power but it just never works on a toy. 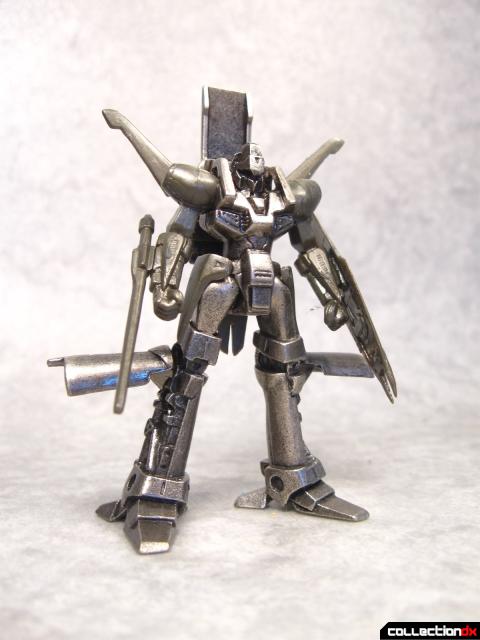 In the end what does this figure and L-Gaim itself mean to the mecha consuming masses? In my opinion it is the quintessential 80's mecha show (for better or for worse) and one that only stands the test of time due to its mostly straightforward nature and the fact it's tied to two notable creators who don't really seem to care much about it outside of being an idea farm. For me it was a show defined less by endless laser sword fights between robots or the fiftieth time someone managed to sneak into a heavily guarded base through an air duct, and more a series of bizarre yet somewhat charming character moments. L-Gaim didn't change the world but it did fill a space inside my head and the heads of many other viewers. The Heavy Metal L-Gaim Diecast Figures are a perfect example of how you market a show that is just simply... there. I don't regret the time spent watching it, but wouldn't recommend the show as a priority even for diehards. The Diecast Figures are likewise, nice enough to own but not worth pursuing too diligently.

You know sometimes when I think back on L-Gaim as a whole, I get a weird tingling sensation in my eyes. 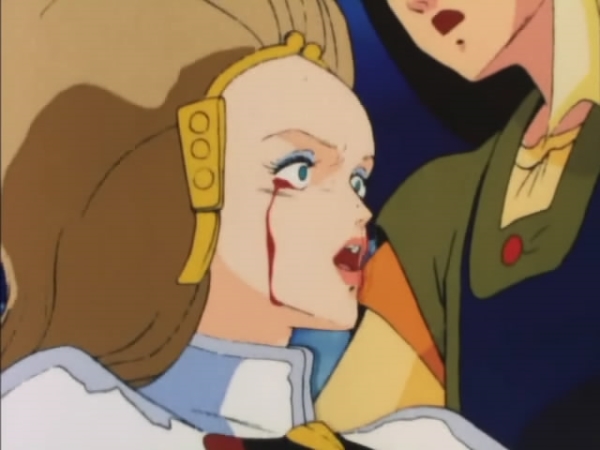