Today I will be reviewing the 2001 re-issue of the Takara's original King Exkaiser from the 1990's anime "Brave Exkaiser". King Exkaiser is the ultimate form of the character Exkaiser, when combined with King Roader.

To start off with, King Exkaiser comes to you in a beautifully illustrated, but very lightweight cardboard box shown below. Even though this toy is an original Takara product, the box is very similar to the packaging used by some of the Sonokong re-issues I have encountered. The only real difference is the Sonokong re-issue's flimsy plastic inside tray is replaced with an even cheaper feeling flimsier cardboard insert.

Next, I will go through the different modes this figure has, starting off with King Exkaiser's combined "Car and Trailer" mode. In this mode, King Exkaiser doesn't really do much. Yup, it rolls pretty well, and yes it is very impressive at 19 inches long, but it lacks gimmick's (missiles anyone?). The plastic used feels strong enough, but actually, some of the Sonokong Brave Series toys I have reviewed felt much sturdier. Don't get me wrong, its a quality piece and all, I just don't care for the feel of the plastic used.

You may notice that in this mode, King Exkaiser almost looks a little like Transformers Rodimus Prime. Hmm, I wonder?

Moving along, we have Exkaiser in car mode. Again, nothing really special about this mode. All I can say is wheels roll and it feels very solid.

Let's take a look at the trailer end of King Exkaiser, named "King Roader". At this point it starts to get a little more interesting. I mean c'mon, just look at the funk. Its a flying trailer for god's sake! The wings can spread apart and it has wheels on the bottom. Making it, essentially its own vehicle. No need for being towed here!

Moving right along we have Exkaiser in his alternate robot mode. In this mode, Exkaiser stands approximately 7 inches tall and has some articulation at his shoulders, elbows, knees, and feet. Not too shabby for a Brave Series figure. In this next photo, I have Exkaiser holding King Exkaiser's sword. I know what your thinking...man that sword must look like a knife when King Exkaiser holds it. Just wait, we will get to that. 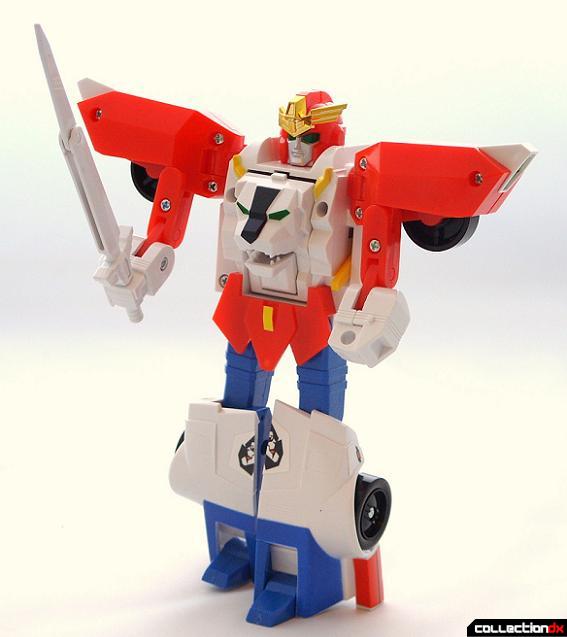 As I mentioned above, Exkaiser does have some articulation and he can wield a sword. He also has a cool chest gimmick. Just flip the yellow switch to the right of his chest. When you do this, a lions head is revealed. The lion's mouth does have some movement of the jaw. 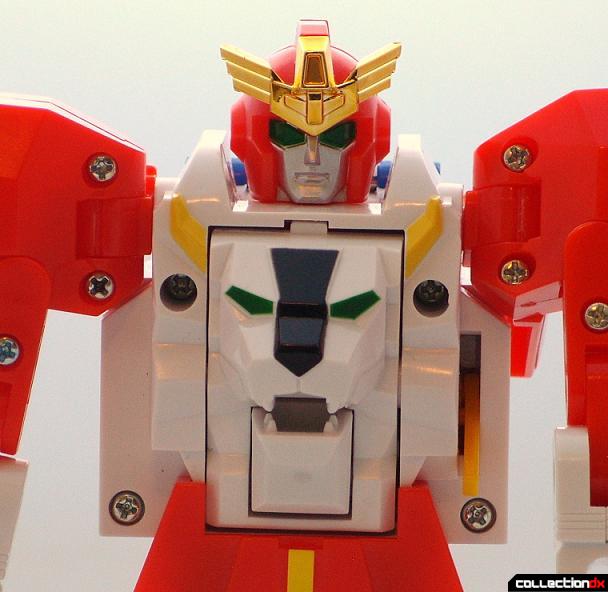 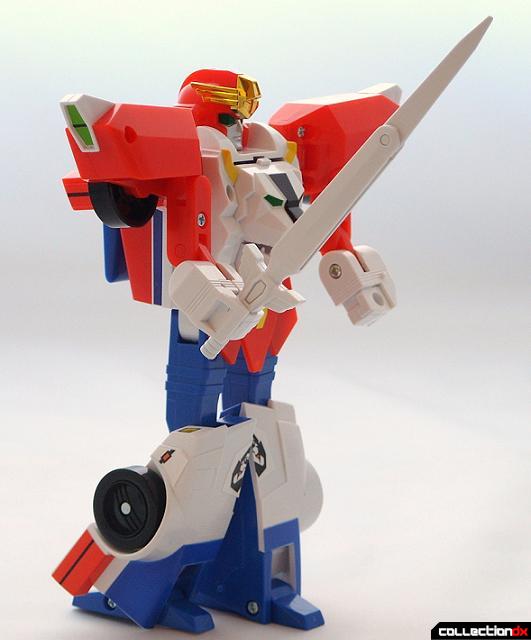 Exkaiser is a pretty well-balanced figure allowing it a solid footing for the roundhouse kick shown below. 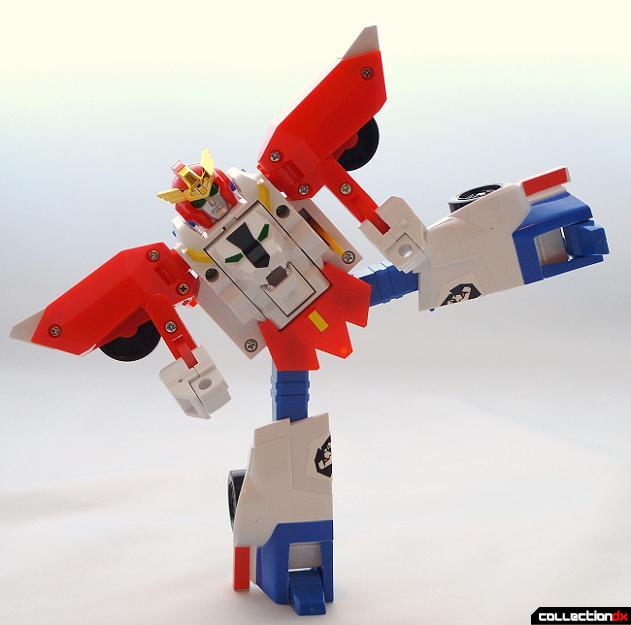 Finally, you can take the Exkaiser figure and place him into King Roader to form KING EXKAISER! As you can see, its a pretty snug fit. The transformation is very similar to the anime clip shown above. 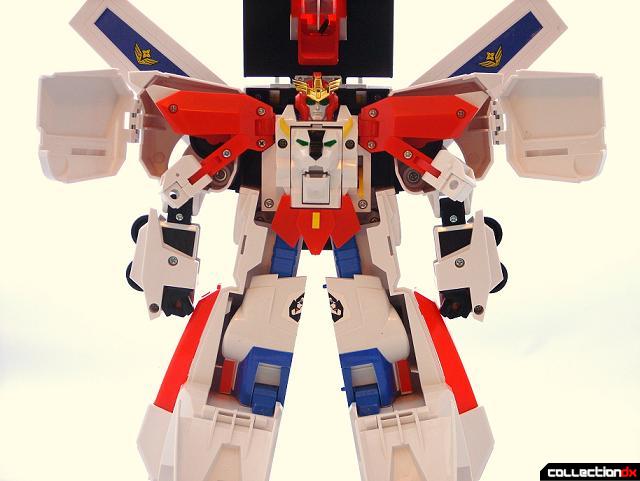 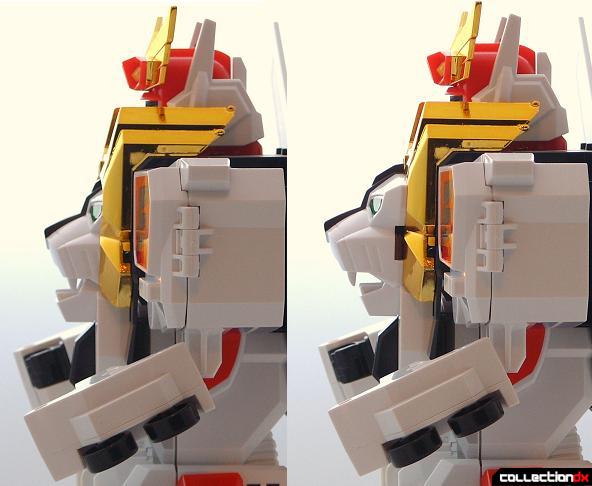 With a quick flip of the yellow lever to the right of the lions head on King Exkaiser's chest (lever shown below) releases the lions head and allows it to extend out of the body (shown above). 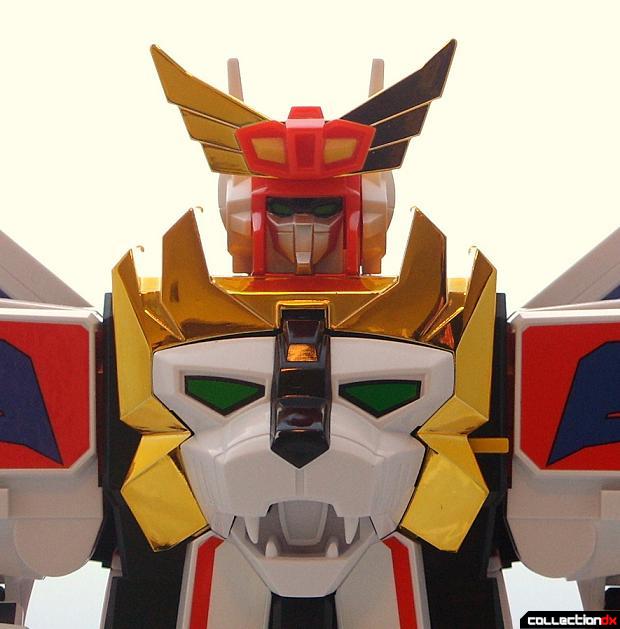 Tah Dah! We have King Exkaiser! King Exkaiser stands approximately 12 inches tall and weighs in at 1 lbs 7 oz. Like other Brave Series figures, King Exkaiser has very little articulation. What he can move, can be found at his elbows. He is basically a "brick" 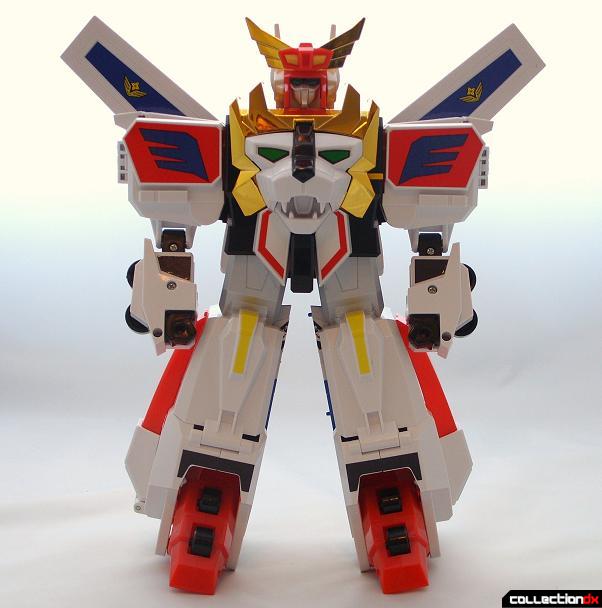 What do we have here? A hatch opens on King ExKaiser's right leg to reveal his mighty sword! The sword folds in half for easy storage. 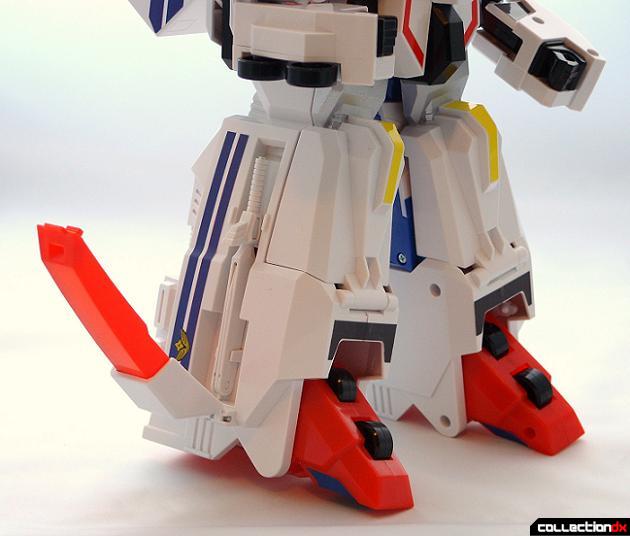 OK, I take it back, his sword isn't so mighty. It's actually downright tiny! I think I will leave the sword for Exkaiser to wield. If you remember, a few photos up above, I have photos of Exkaiser holding King Exkaiser's sword and he looked just fine. 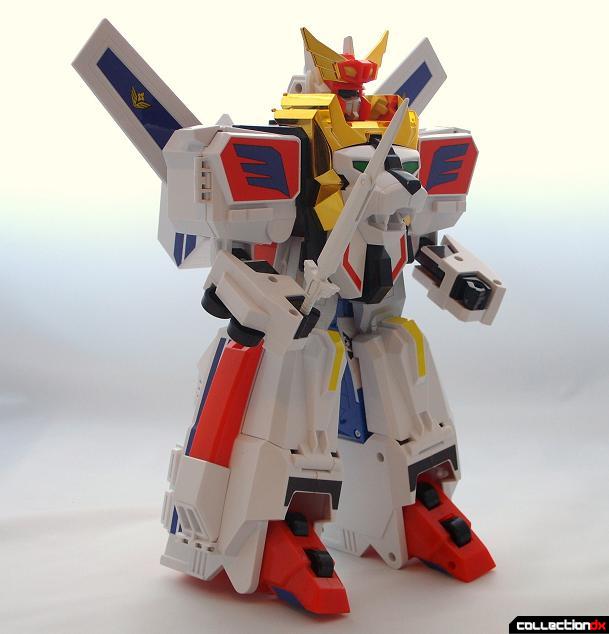 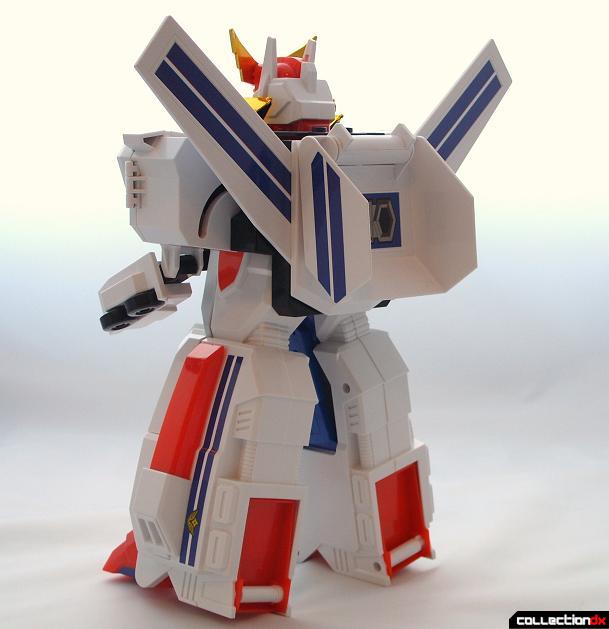 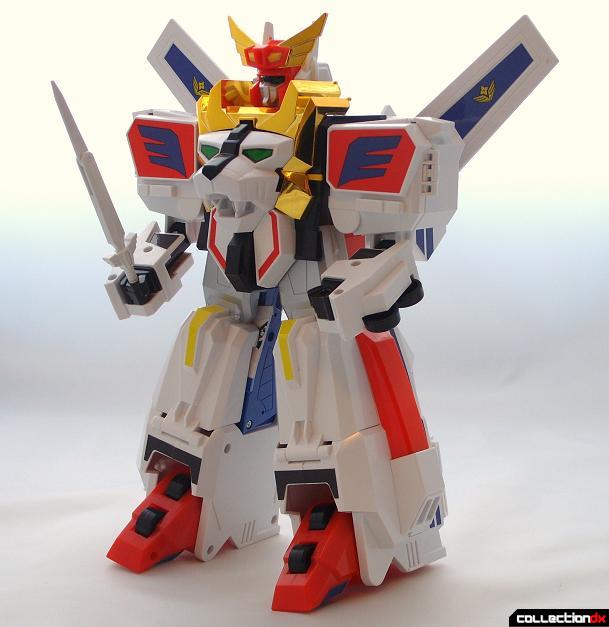 What a difference 15 years or so makes when you look at the toy design. Clearly, the Masterpiece version blows away the originals design, articulation, and detail, but this fact doesn't make the original a bad toy.

I would like to thank our friends over at www.toyfreakz.com for providing us the sample of the MP-B01 Masterpiece King Exkaiser. Please check out their store for some great deals on Japanese toys.

10 comments posted
I'm not familiar with this

I'm not familiar with this series, but somehow I get a 'Rodimus Prime' feeling from him.

I bought the MP Exkaise/Exkizer back when it came out. I always had problems with chipping paint due to Exkaiser's uber tight fit in King Roader. It's a really nice fig regardless. Though I think he makes a better display piece than a toy.

What's up with the multi-colored windshield on the reissue? That always bothered me.

One problem that the DX Brave leader toys have in general is that they are often based on early designs. If you get your hands on Kunio Okawara's Brave Design Works, you'll see a bunch of early character designs for King Exkaiser that looks a lot more like the toy than the design that was actually used in the TV show.

It's also possible that Kunio Okawara was retrofitting an existing Takara design, since development for Exkaiser toys started before there was a Brave series, at which point they were planned to be part of Transformers. If that were the case, there's not much he could have done about the odd proportions.

That said, I still like King Exkaiser for his Rodimus Prime vibe and his being the first Brave leader toy. He reminds me a lot more of a late 1980's Transformer than subsequent Brave toys do.

Oh, and I made the fansub that those Youtube clips are from! :D

The multicoloured windshield is wierd isnt it? I like the Masterpiece but I think the blockiness of the original King Roader looks more like a vehicle but the aesthetics of the robot modes for Exkaiser, King Exkaiser and even Great Exkaiser just blows away the original. Only thing that really makes one consider the original is probably the size.

The car mode is Rodimus, but the trailer is pure Star Convoy, which would make sense, as that's much closer to being its contemporary. I like the look of the car mode guy, but like most Brave toys, the combined huge guy bot mode's lack of really any features just kills it for me.

I totally agree with you Ben. That's why I encourage people to get the Masterpiece version. I feel it's combined mode is quite impressive

Is there a good review of the Masterpiece somewhere?

I did a mini review of the two Masterpiece Braves here:

I have a theory; Takara probably used the same plastic they used for the original back in 1990, to perhaps appease the older fans of the show, I guess they could have used stronger plastic if they think it wouldn't be a big deal? Again only a theory. If Exkaiser is a brick, then Great Exkaiser, combined with the original Dragon Kaiser must be a super brick! :D But a nice looking super brick it should be. Overall this looks like a great G1 Transformers-esque toy and it's great that Takara are doing re-issues. Yeah, I think Rodimus Prime must have inspired this character. :D Superb review. :)