This toy is a perfect example of me doing the wrong thing while thinking I'm doing the right thing. It was the first East Coast Chogikin Summit I would attend and the whole lot of us had gone over to the warehouse at Robozone to do a little shopping. At the time, they had stacks of these Yamato Giant Robo (ジャイアントロボ) toys for a mere $20 each. But I had just bought an expensive Jumbo not long before and while I did buy a couple toys that day, I decided to pass on this one since I really didn't know anything about it and wasn't a huge fan of the character design. I thought I should try to curtail my spending somehow and Giant Robo was left behind. 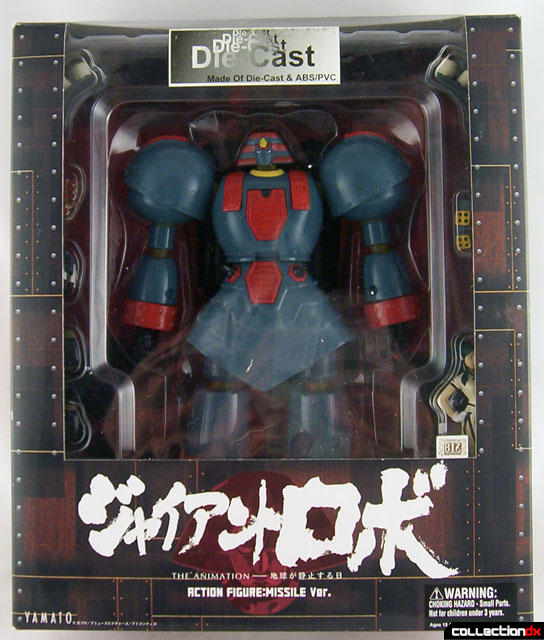 At the time I felt proud of myself for trying to be responsible with my money and not just buying every little thing because it was a good price. But I would later learn that not only was a GREAT price, it was also a very good toy. Still, I didn't worry too much about it and put in somewhere in the back of my mind, with the list of other things to get if I saw them somewhere cheap. And while it took nearly four years, eventually I would score one on ebaY for the same $20 I refused to part with before (plus shipping of course!).

This updated version of the character is from a series of OAVs beginning in 1992 called "Giant Robo: The Day The Earth Stood Still". I haven't seen the anime, but the new design is quite different from the original (left side of case). I prefer the old one to the new, but now that I have this toy in hand, I feel even stupider for not buying it the first time. It's a solid, hefty, quality hunk of diecast. It's about 7.5" tall and pretty much all the blue-ish grey areas that you see are diecast, with the exception of the ABS "skirt" and in the head. Honestly, if I had realised exactly how much diecast was in this thing, I couldn't possibly have passed on it for $20. 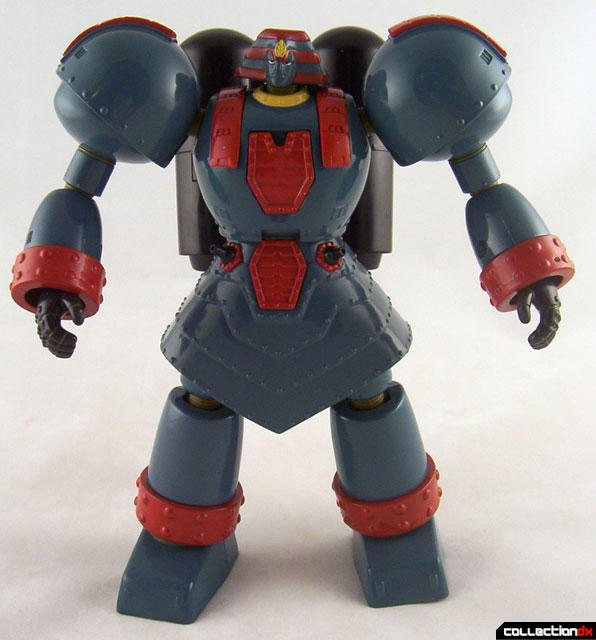 It's also very well articulated and is surprisingly poseable. The ankles are on ball joints, while the shoulders, elbows, knees, and hips are click nicely into place when you position them. Furthermore, the waist and upper arms can be turned for enhanced flexibility. The head actually has two joints. Where the neck attaches to the shoulders is a ball joint and the head that is attached on top of that can be turned side to side. The only real drawback as far as articulation goes is that the forearms are VERY limited in how far they can be raised. The edge of the forearms will hit the edge of the upper arms so they don't go far. For instance, Giant Robo would not be able to touch his own shoulders (or even come close). This toy would have been greatly improved if it used the same extending arm feature as the Aoshima Shin Seki Gokin Mazinkaiser, where you can pull the arm further out and then bend it. In the picture below, that is as far up as I could point the lower arms. 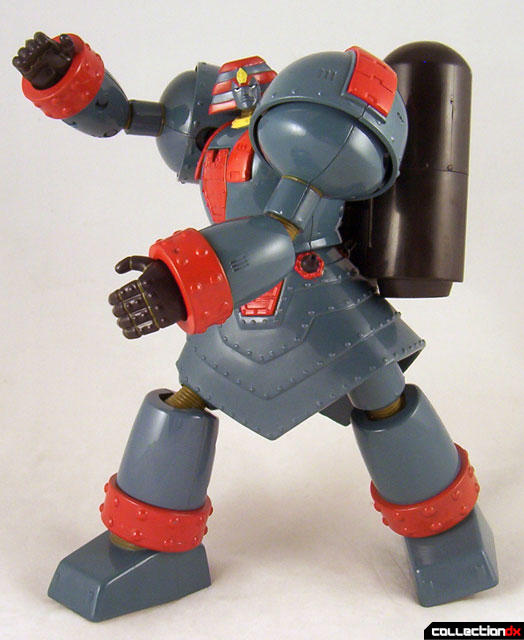 Another thing I like about this toy, is that it is really very similar to the Aoshima diecasts. In addition to being a big heavy chunk of metal, for the most part, it is ready to play with/display right out of the box. It does come with some accessories in a plastic tray, but those, should you decide to attach them, are pretty simple to attach. You just pop the red PVC out of the shoulders and neck and replace them with the appropriate missile launchers. The parts in the chest and waist are slightly trickier, but not much. The chest needs to be pulled out and lifted to insert the missiles here and the waist is opened by sliding it down. I found on mine at least that it was a tight fit to get the missiles all the way in here. But once they are all in place, Giant Robo looks ready to kick some serious butt. Personally, I think that much firepower looks a little like overkill to me, so I display it without the chest and waist part. 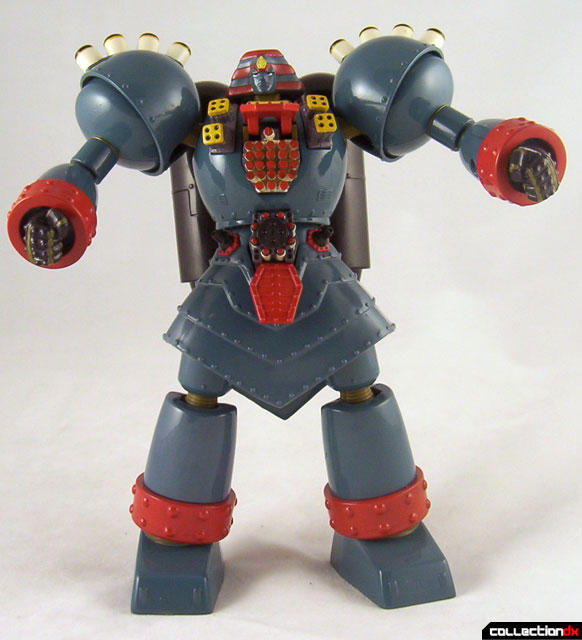 You probably noticed the girl in the tray as well. That's Gin Rei and I must admit to being surprised at how well done she is, for what is basically a throw-in accessory. The sculpt and paint job are clean and accurate for the most part. In fact, they even painted the earring in her left ear!

I won't say this is a great toy. The lack of mobility at the arms, as well as the fact that the lower arms sometimes don't stay in place in certain poses (the metal in the arms is too heavy for the turning joint) are two serious drawbacks. And for a toy with so many missiles, it would be nice if at least some of them actually fired. But on the whole, if you see this at a decent price, don't make the same mistake I once did. 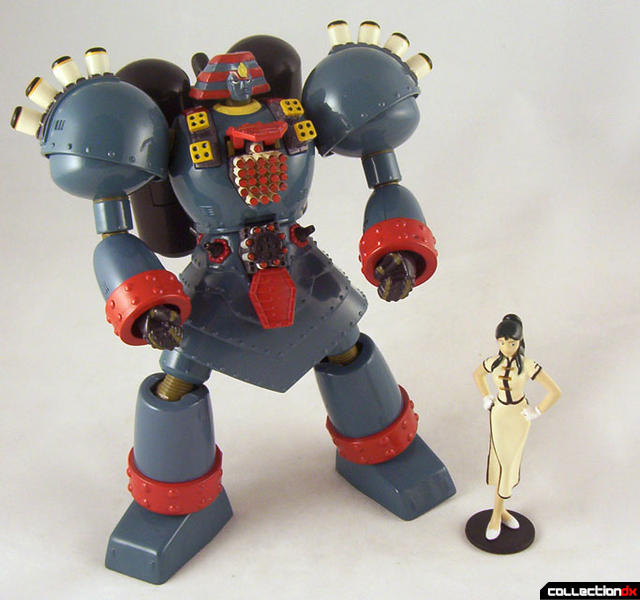 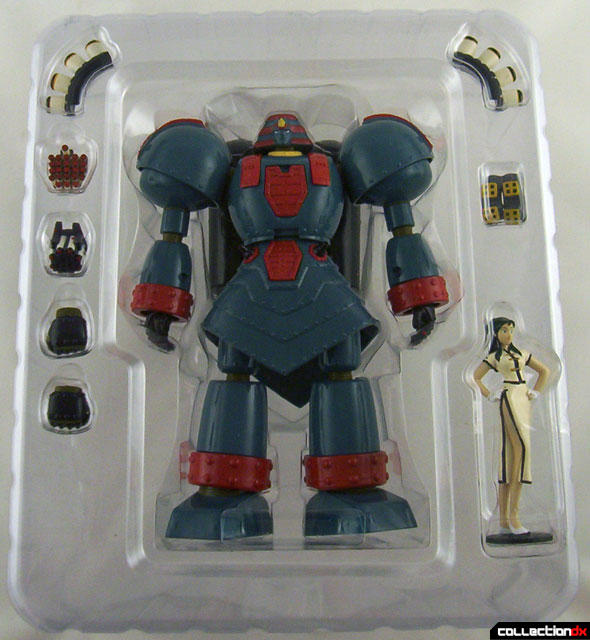 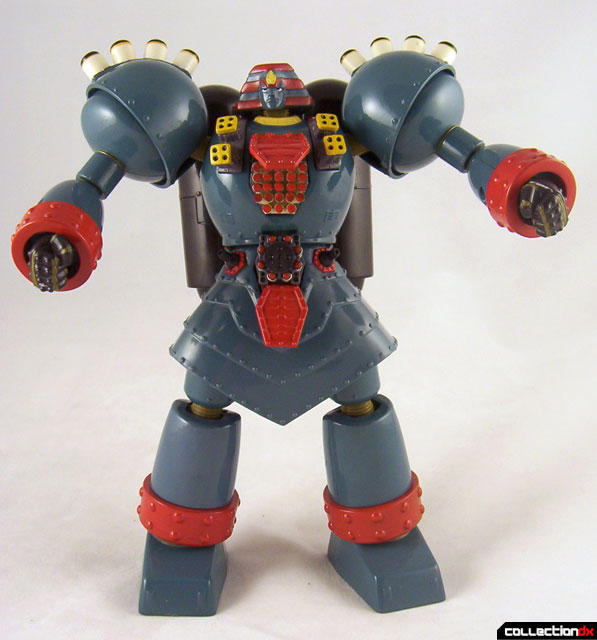 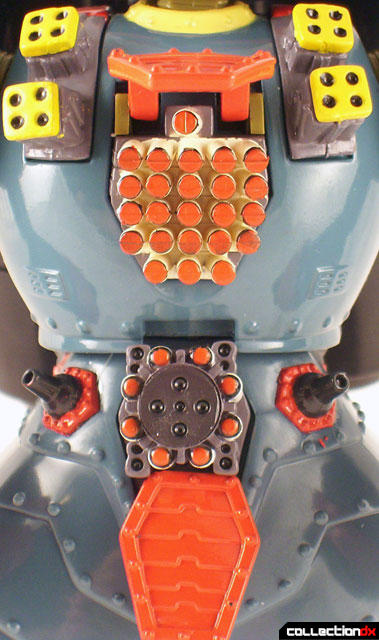 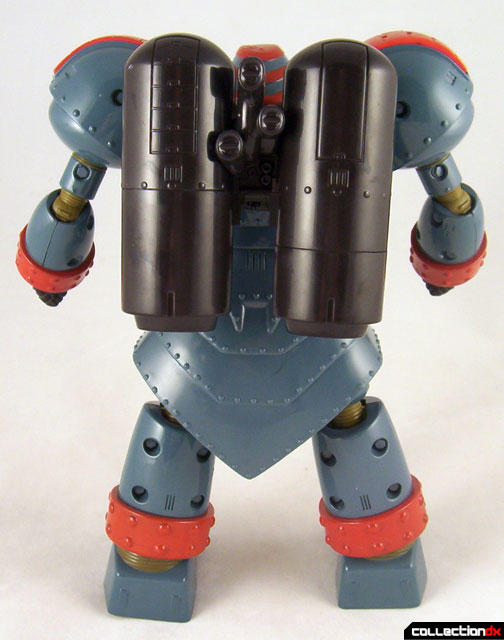 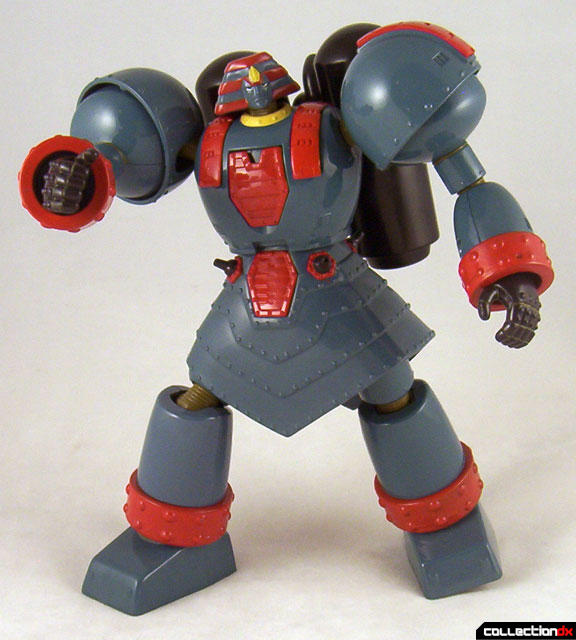 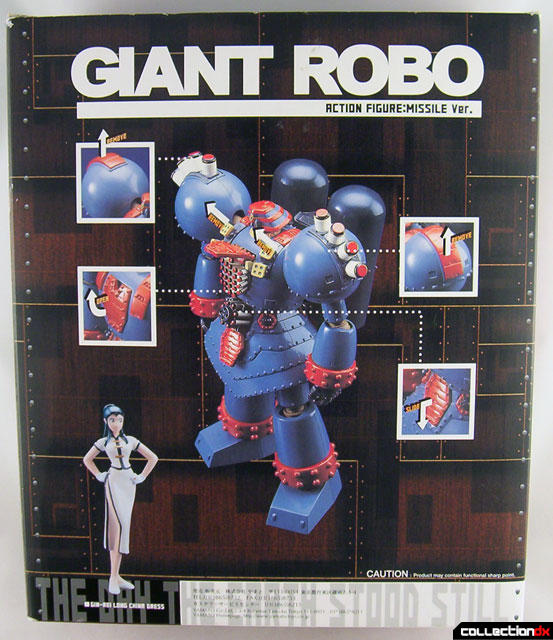 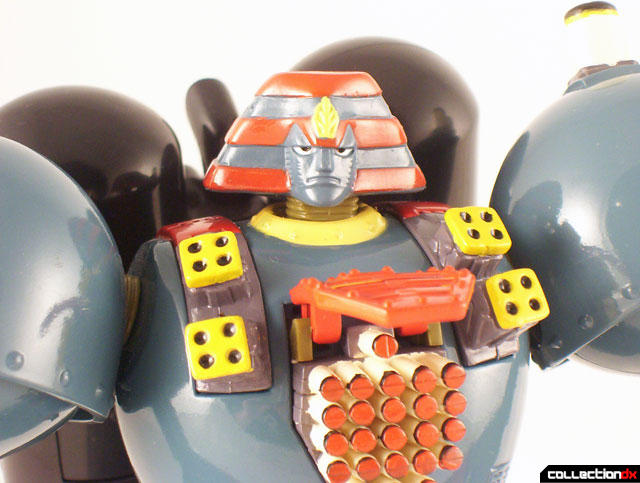 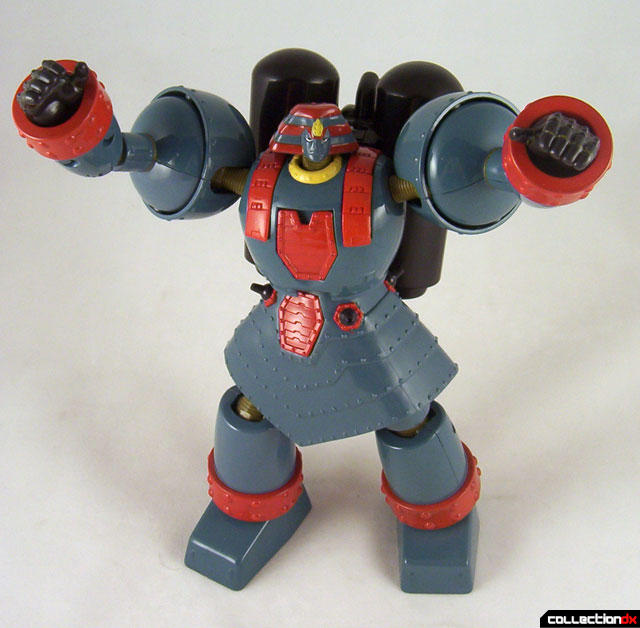 I'm new here, and thanks to your review, I knew what I was looking at when I checked out a local collector store for the first time today. They had both versions, for the same $20. I grabbed the bazooka backpack version, and I'm glad to have it on my shelf. Great heavy, clicky robot for the bucks. Thanks NekroDave! You've activated Mysterious Underground Toy Store Magnets that may yet suck my truck(me within) back for the other one.

Wow, many thanks and welcome to the site!

It's always nice to hear feedback on reviews, especially positive :), but it's also cool to see it on ones that are not current. It's nice to know the older reviews still get looked at and also makes it feel worthwhile to do reviews on the toys that fall into that nether region between "vintage" and "current", in the first place.

The fact that Giant Robo cannot touch his shoulders is NOT a drawback but anime accuracy!

The robot is chunky and retrograde - just look at he huge rivets adorning his body!

The toy would have been greatly ruined if Yamato used the same extending arm feature as the Aoshima Shin Seki Gokin Mazinkaiser!!!!

The animated Giant Robo is also very limited in movement.

It's already a miracle he can fly!

Oh and by the way, I made the same mistake you did - if not worse - as I did not buy it even if I had watched the anime and enjoyed it!!!!

Wow! I got lucky today and found the Bazooka version of this guy at a little collect able toy store that was going out of business. New in box under a heavy layer of dust. Mixed in with tons of obscure 90's comic book characters and 12 million McFarlane toys was this gem tucked in a box on the floor. He is a delight. Heavy. Good presense. And he looks perfect standing beside the SOC Big-O.