Power Animals are no different from those found in the wild today. They have only lived far longer, and can regenerate themselves much faster thanks to the power of the Earth which has been absorbed into them over the centuries. This has increased their defense, intelligence, and size as well. They are also capable of merging their bodies together to form incredible humanoid-shaped warriors which stand several stories tall, and have weapons & special powers granted to each. As Duke Orgu Loki in his Majuu Gattai Gao Hunter Evil continued to dominate in his quest for revenge against the ancient Gao warriors who had ‘betrayed’ him, they injure Gao Bison significantly one time, preventing Gao King from being formed. Unnoticed by either side of the battle is a small silver & purple beach ball-sized wheel rolling around the area, trying to get the attention of the GaoRanger. When it finally does, it turns out to be the smallest Power Animal, Gao Armadillo. After jumping into Gao Black’s arms, Gao Armadillo (through Gao Red’s unique animal-reading ability) says that he- and his larger friend Gao Rhino- were summoned by Gao Bison to help the rangers out. Before bounding off, Gao Armadillo gives to Gao Black a pair of Gao Jewels.

Gao Rhino (back) - He is an additional Power Animal controlled by Gao Black, and it is understandable why. Like Gao Bison, he is very powerful for his size, and has a large body dressed in light blue, black, gold, and silver, with red eyes, two small ears, and two golden horns on the top of his head, and doesn’t like being bullied around. Gao Rhino, along with his good friend Gao Armadillo, is a lower torso/leg component PA, and forms the lower torso, legs, and feet of Gao Icarus. His formation attack is the Rhino Shoot.

Gao Armadillo (back) - He is an additional Power Animal controlled by Gao Black, and couldn’t be more the opposite of his good friend Gao Rhino. Whereas Gao Rhino demands respect, Gao Armadillo (appears as Gao Majiro when translated) gets his own attention with his bouncy attitude, and small, cuddly purple & silver body. (Imagine the girls crowding around him, saying “Kawai!”) But don’t be fooled- he is anxious to help out, and curls up into a ball to smash boldly through enemies like a bowling ball! Gao Armadillo, along with his good friend Gao Rhino, is a lower torso/leg component PA, and forms part of the right foot of Gao Icarus. His formation attack is Rhino Shoot. Gao Armadillo is also the only Power Animal (besides Gao Wolf) which can change size at will, and often becomes the size of a beach ball when not engaged in battle.

Gao Rhino and Gao Armadillo make an interesting, possibly unique, pair in the Power Animals line. Gao Rhino is big and heavy, much heavier than any Power Animal to this point- meaning, specifically Gao Bison (DX Hyakujuu Gattai Gao King), PA-4 Gao Gorilla, and Gao Alligator (DX Majuu Gattai Gao Hunter Evil); and against those three, Gao Rhino also has the most die-cast metal in his body- feet, inside all four legs, the arch over his back, gold-colored armor sections for when it’s changed, and joints needed for transformation. This also makes Gao Rhino the most die-cast metal laden Power Animal ever made. Interestingly, only his mouth can move when he’s alone. Gao Armadillo, on the other hand, is the smallest Power Animal, and expectedly suffers for it. He has no die-cast metal, and no movable animal qualities. To compensate for this, Gao Armadillo can curl up, like a real armadillo, into an armored ball shape. Because of the limit in his size, the change to ball form isn’t quite complete, so an extra piece swings out from his belly (which covers his head) to make him completely round. This fits in with the set’s special feature. Gao Rhino has a trigger built into his smaller horn which, when depressed, springs out his larger horn forward about an inch, and if Gao Armadillo is curled-up nose-to-nose with him, then he can be shot forward by the spring-loaded action. In addition to this, a pair of notches was molded into the metal arch over Gao Rhino’s back legs. This way, Gao Armadillo can ride atop his larger friend (though just don’t turn them upside-down, ‘cause he’ll fall off!) 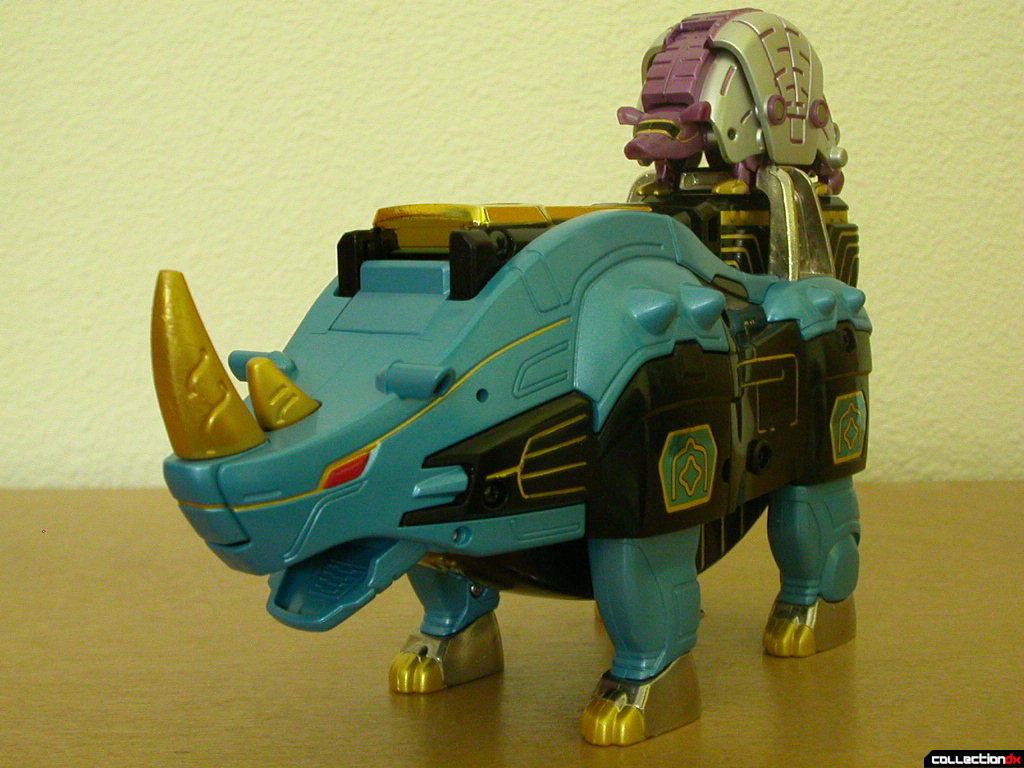 For those of you wondering what the differences are between PA-5 Gao Rhino & Gao Armadillo from “Hyakujuu Sentai GaoRanger”, and its English-speaking counterpart, the Rhino & Armadillo Wild Zords from “Power Rangers Wild Force”, there are a few pretty noticeable points:

Otherwise all moldings and die-cat metal were left intact. The Rhino and Armadillo Wild Zords were not released individually, but as two of five components in the Deluxe Isis Megazord set. Gao Rhino & Gao Armadillo, also, were released as part of a special release DX Hyakujuu Gattai Gao Icarus set, but could alternately be obtained individually (as they are here), which they weren’t for their “PR” release. For that matter, the Deluxe Isis Megazord never made it to American shores. It was, however, released in the UK. 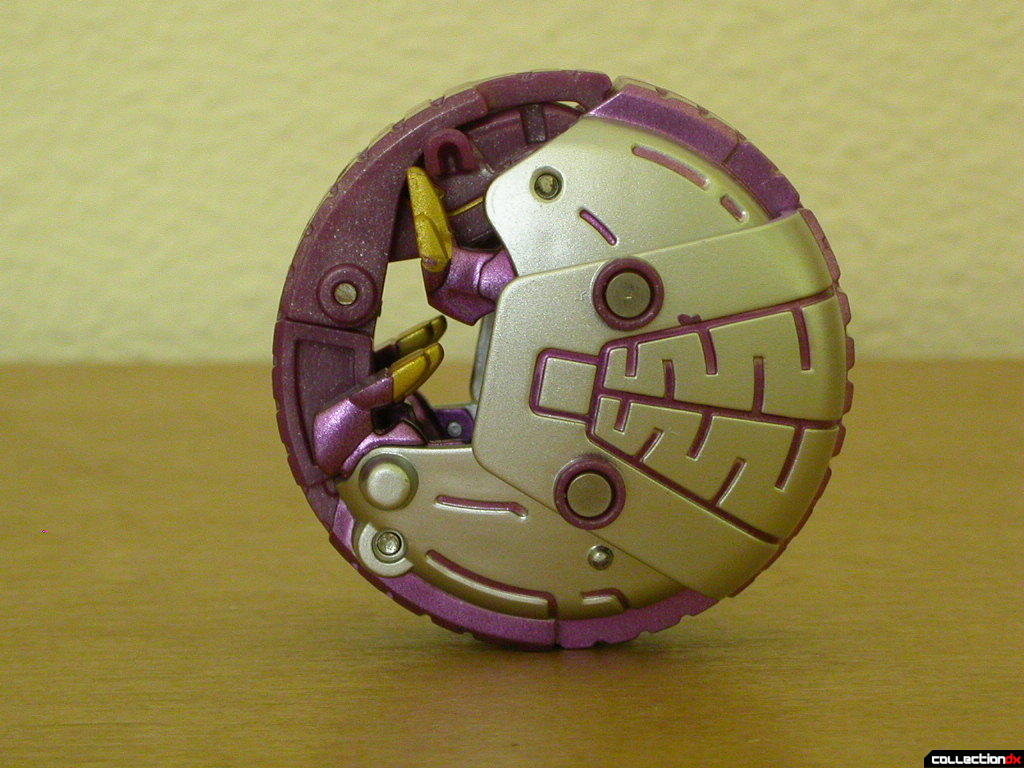 Traditionally, Super Sentai mecha have had missiles that snap into place, and then you press the trigger and away they go. Not so here. Instead of a missile, you get the kawai Gao Armadillo with his big ears, short snout, little tail, and goggle-like eyes (which, strangely, do not match his light-blue eyes in the show). Gao Rhino, like several of the other Power Animals, is immobile except for his mouth, and lacks poseability in any form except to serve as transport for the even less-poseable Gao Armadillo. It is the spring-firing feature that makes this a fun set. That alone makes it worthwhile, since Gao Armadillo actually rolls pretty far when launched. 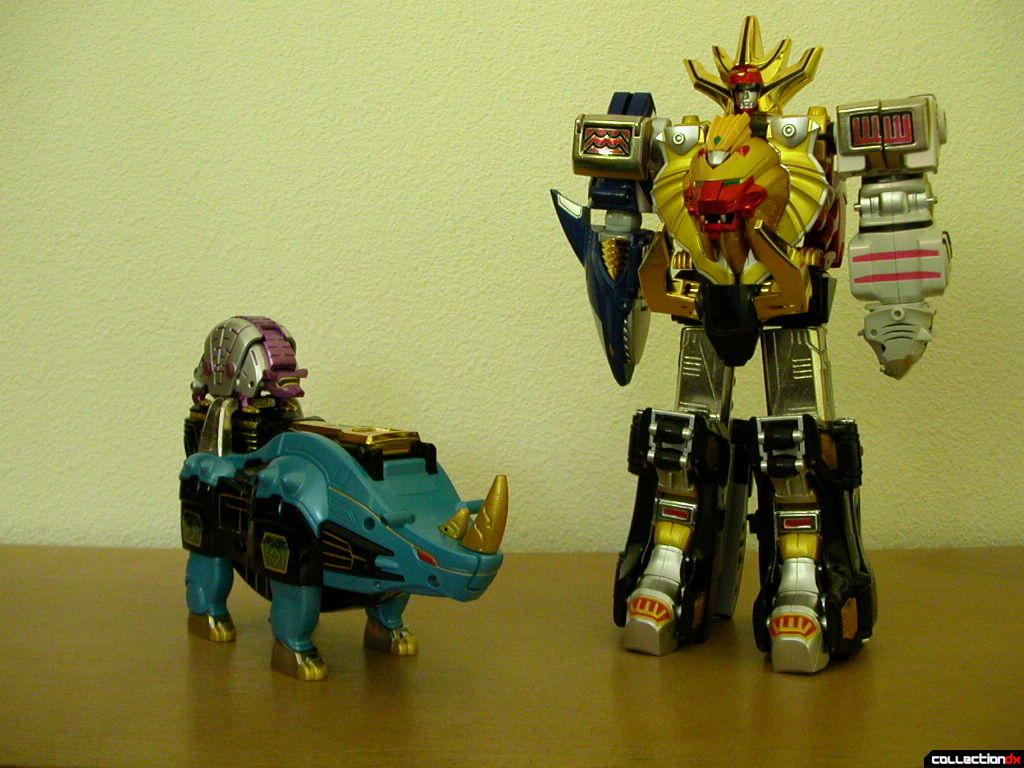 Realizing that Gao Hunter Evil was the source of Duke Orgu Loki’s power, the GaoRanger needed to find a way to break the Majuu gattai. When Gao Armadillo approached the GaoRanger, they figured out how to do that without the still-injured Gao Bison. Quickly, they joined four of their Power Animals with the newcomers Gao Rhino & Gao Armadillo into Gao King Striker. In addition to having additional power for speed and agility, Gao King Striker was exactly what was needed to finally break Gao Hunter Evil with its Rhino Shoot attack. This would lead to the Curse of Loki being lifted on the ancient Gao warrior Shirogane, and turn the tide of the conflict once more against the Orgu. Being quite satisfied with their new human companions, Gao Armadillo and Gao Rhino would remain on the Animalium until summoned again. 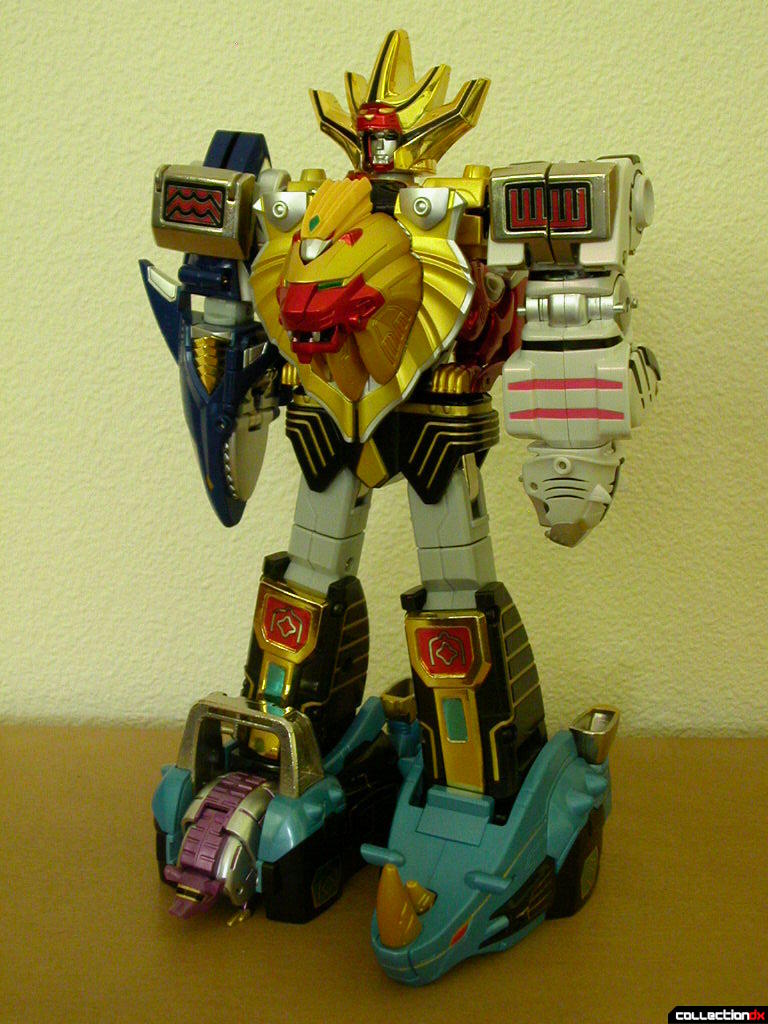 Gao King Striker (back) is an upgrade different from any we have ever seen before. For one thing, Gao King Striker is one of the very few “GaoRanger” combos which have six component PAs-

-rather than five. Instead of swapping an arm, Gao Rhino and Gao Armadillo work together and swap with Gao Bison to form completely different lower torso, legs, and feet for Gao King. Like Gao Bison it its legged formation, the Striker component spreads its legs apart a little (though for the toy, this is necessary due to Gao Rhino’s size.) I’ll tell ya- changing Gao Rhino is far from intuitive; it took me several tries with the instructions just to figure out what is going on (which is very unusual for me), and several days after that to get it without peeking at them for hints. I’d even go as far as to say, aside from Gao Gorilla, this makes Gao Rhino the most complicated Power Animal to transform. So Gao Armadillo becomes something of a relief when all you have to do is just plug-&-snap him into the right foot alcove without moving a single joint on him. The spring-loaded horn on Gao Rhino can be used here to perform the soccer-like Rhino Shoot finisher. Just place the curled-up Gao Armadillo in front of the left foot, and... Gao King Striker shoots-- and scores! 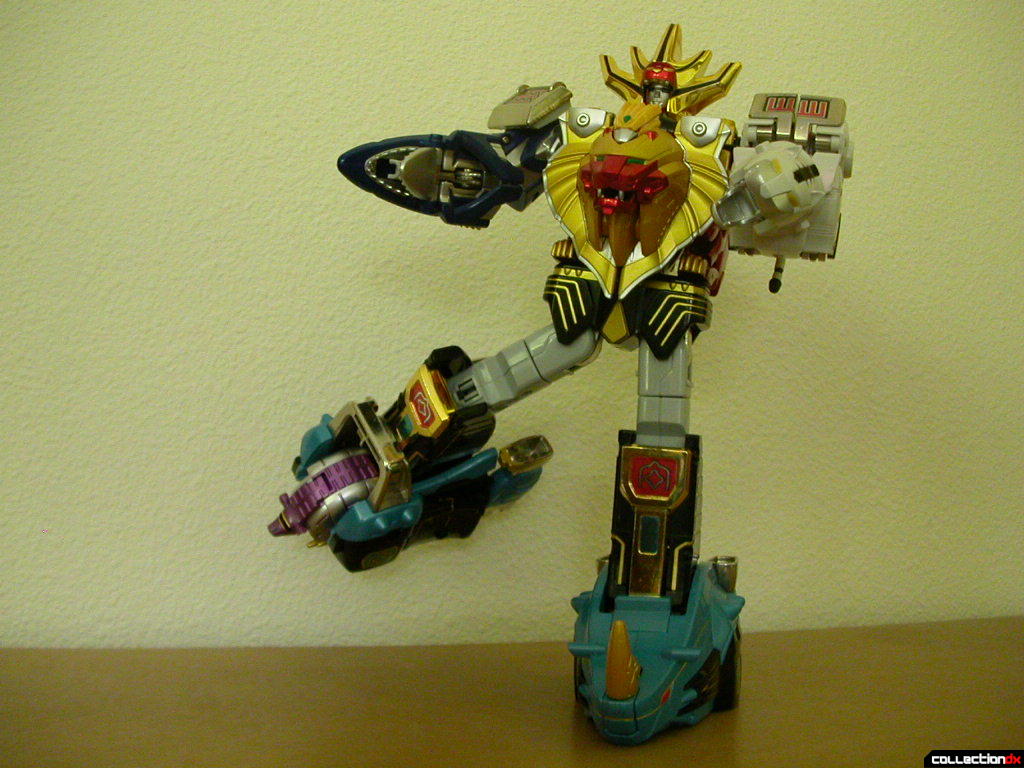 (Who knew Gao King was ambidextrous?)

(The Striker formation can only be used by either Gao King or Gao Muscle, but not at the same time. Interestingly enough, this is the only way to display both mecha at the same time because they usually share both Gao Eagle & Gao Bison.)

During a friendly sparring match between Gao King and Gao Hunter [Justice] early in Quest 27, Vase Orgu makes an appearance and quickly captures the two hyakujuu gattai inside his body, ejecting the six GaoRanger from the cockpits. Without the two and Soul Bird, the GaoRanger have nothing to fight giant Orgu with. In addition to this, Duke Orgu Yabaiba and Duchess Orgu Tsuetsue have been upgraded with the returned power of Loki, removing all traces of their humanity and turning them into true monsters. Tetomu asks the five rangers to show which Gao Jewels they still have. All that are left are Gao Elephant, Gao Polar, Gao Bear, Gao Gorilla, Gao Rhino, and Gao Armadillo. While the six GaoRanger confront Tsuetsue, Yabaiba, and Vase Orgu, Tetomu is having problems in Gao Rock with the alternate personality Soul Bird chick Yon, trying to get the grumpy little critter out of his egg shell. The GaoRanger beat Vase Orgu, but Tsuetsue grows him again to giant size. Finally coaxing Yon reluctantly out of his shell, Tetomu feeds him a special powder which changes him into another full-sized Soul Bird. With the new Soul Bird at their side, they combine their remaining Power Animals into Gao Muscle Striker. Performing both the Bear Strike and Rhino Shoot finishers, Vase Orgu goes down for good, which also frees Gao King and Gao Hunter. “Goaaaal!!!” cheers Gao Yellow. 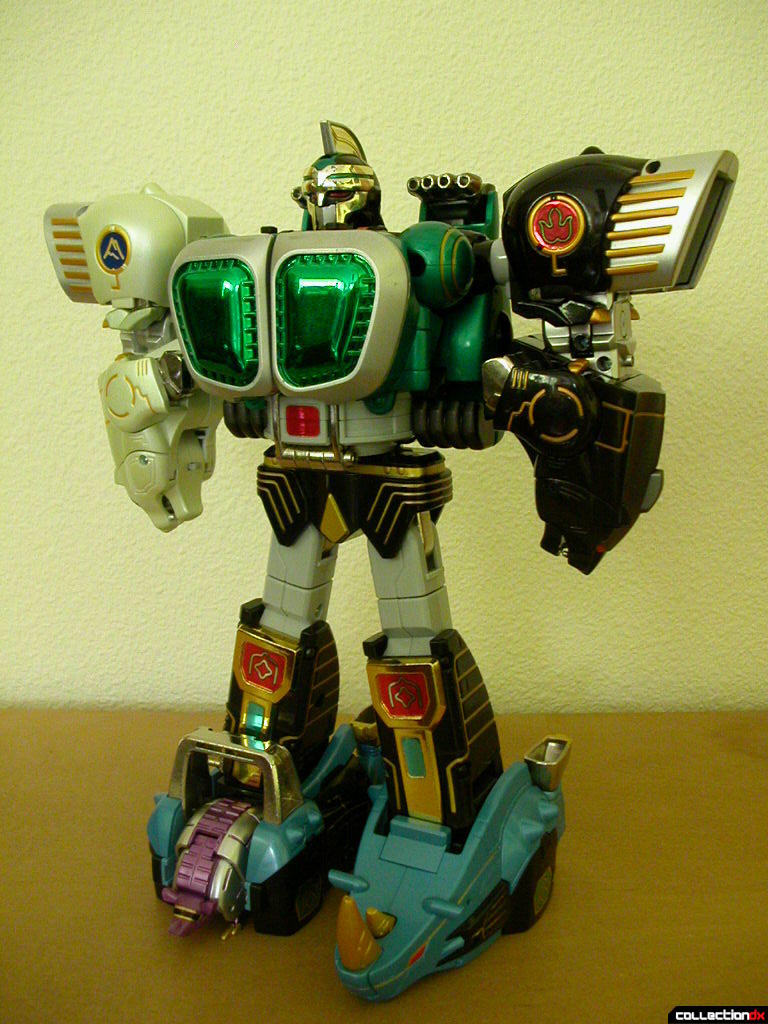 "What? Two combos in one review!?"

Yeah, well- this one is the exception. Gao Muscle Striker (back) is obviously different from Gao King Striker for its upper body and torso, but shares Gao Rhino & Gao Armadillo as lower torso and legs. A special accessory adaptor was included in the PA-5 set along with the two Power Animals, which is needed for this specific combo. While Gao Rhino, like Gao Bison, attaches to the lower half of the Hyakujuu Gattai Gao Muscle via Gao Gorilla’s die-cast metal frame, for whatever reason Gao Eagle is not a part of that equation. (Gao Eagle can fit in the toy version of Gao Muscle Striker, but it looks kinda weird because the Striker form’s upper legs are thinner that Gao Bison’s.) Besides, the adaptor gives Gao Muscle Striker a type of belt appearance and thins down the waist a bit from all angles. The Muscle Anchor, Bear Strike, and Rhino Shoot features are all accessible in this form. 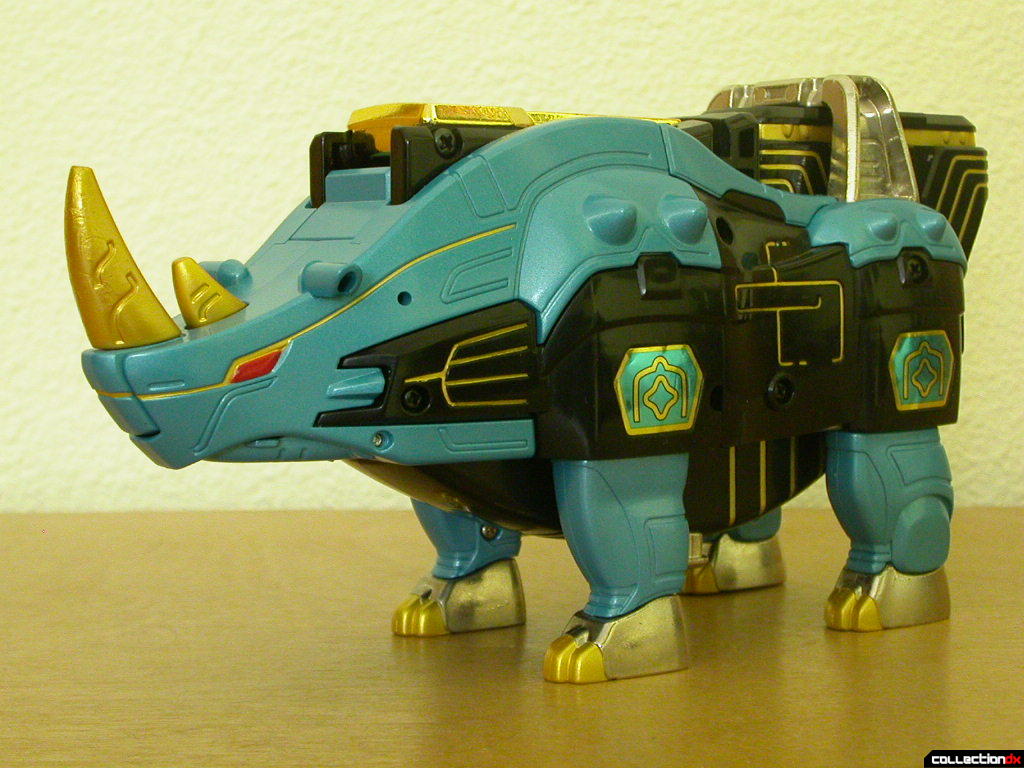 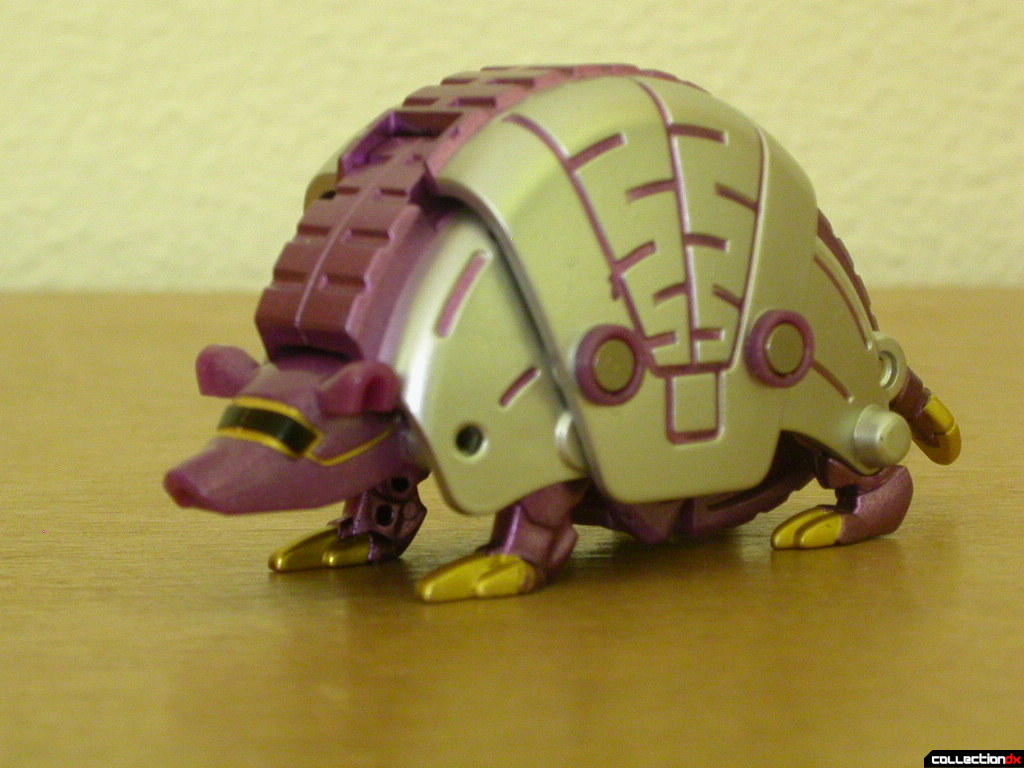 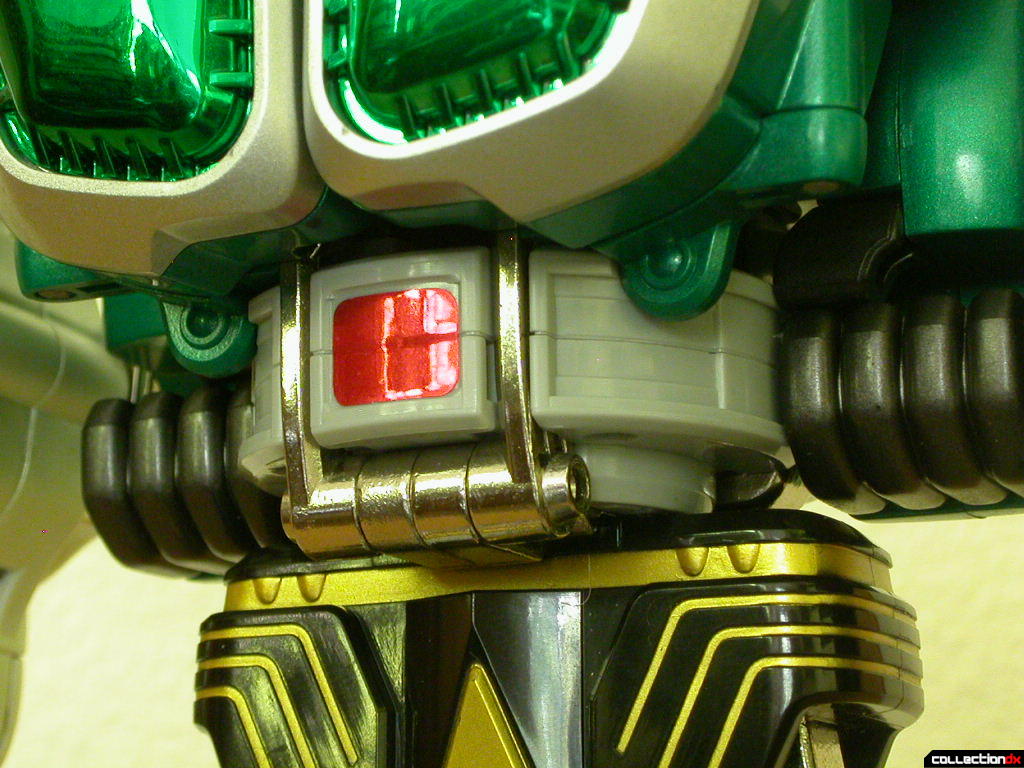 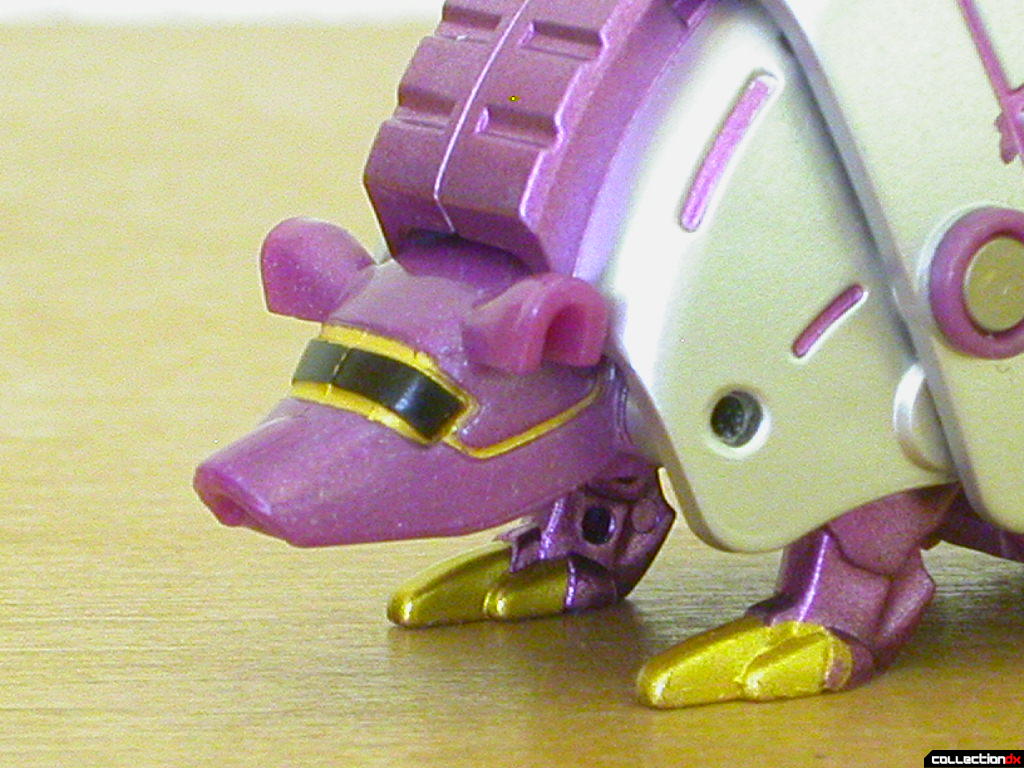 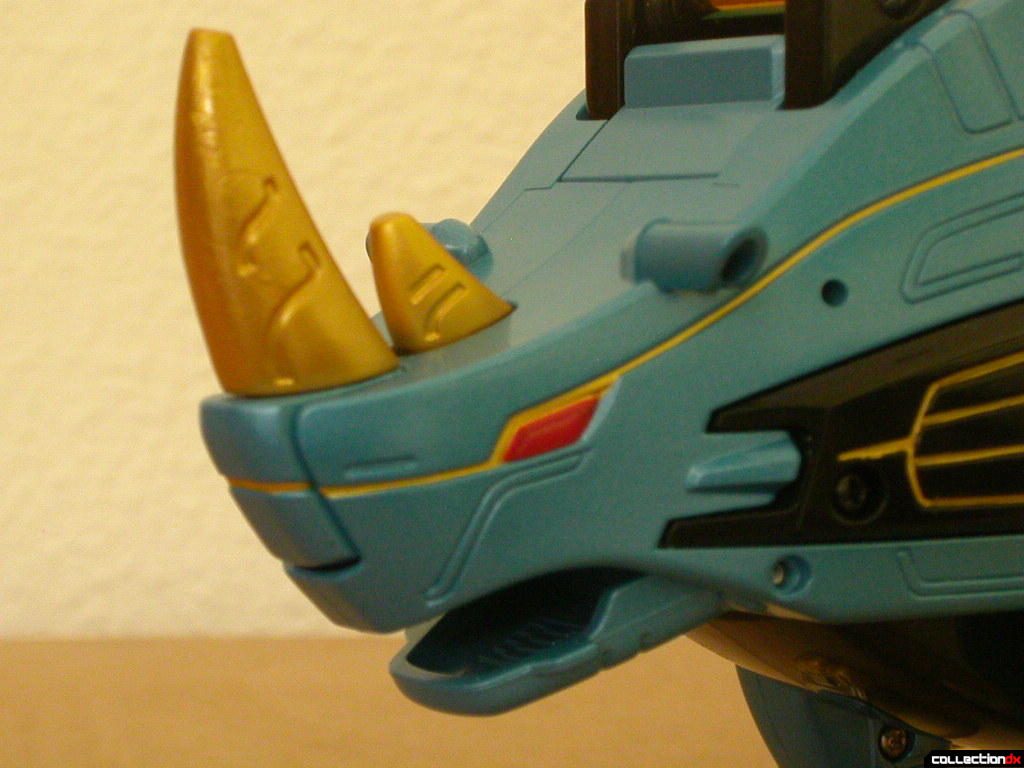 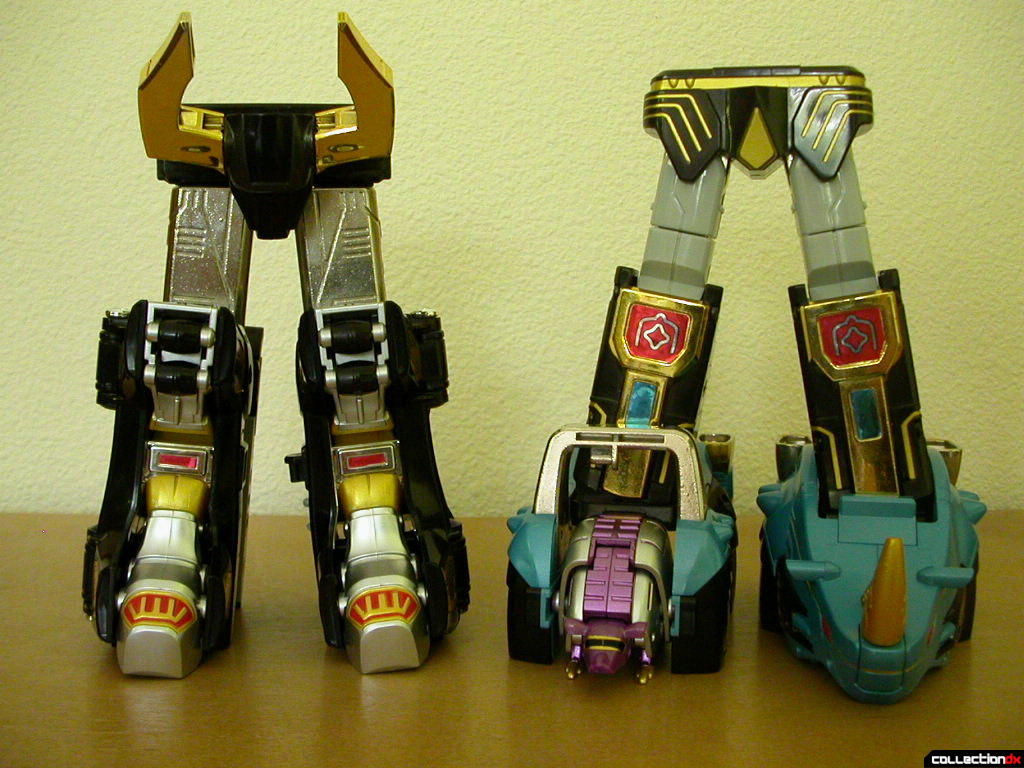 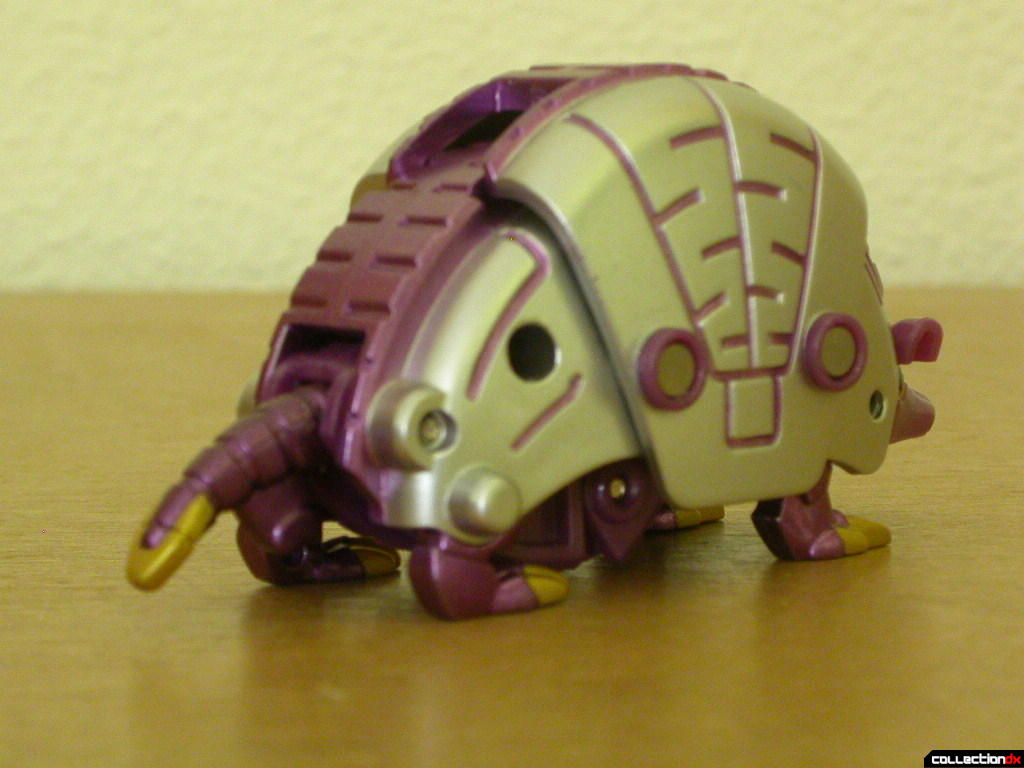 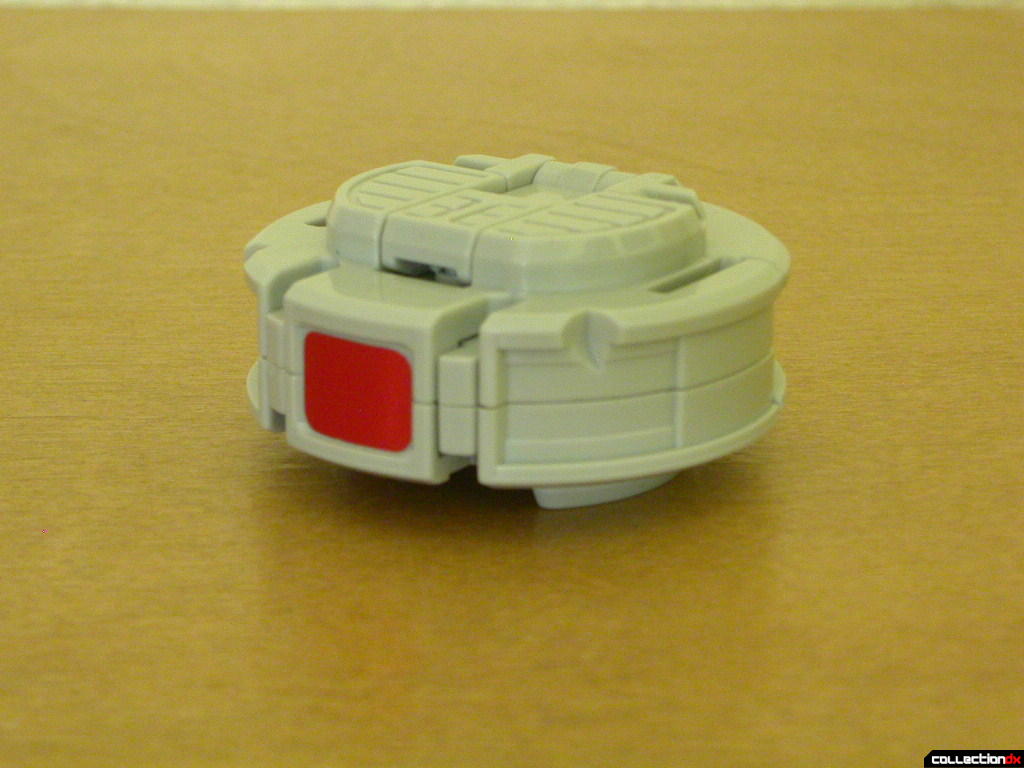 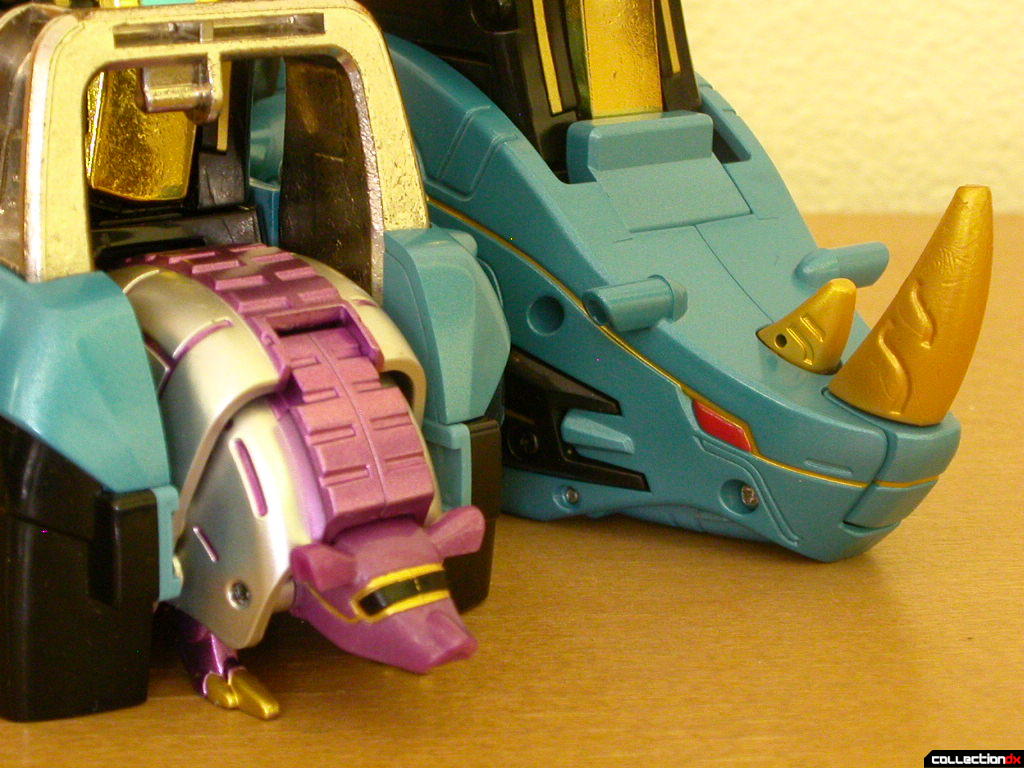 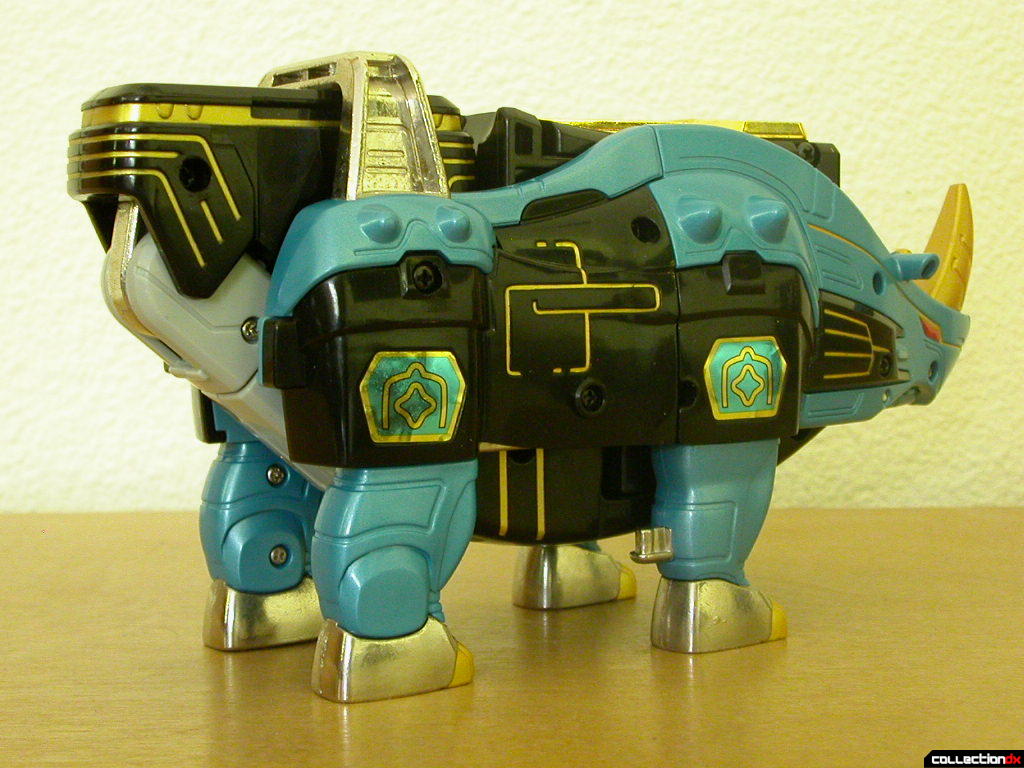 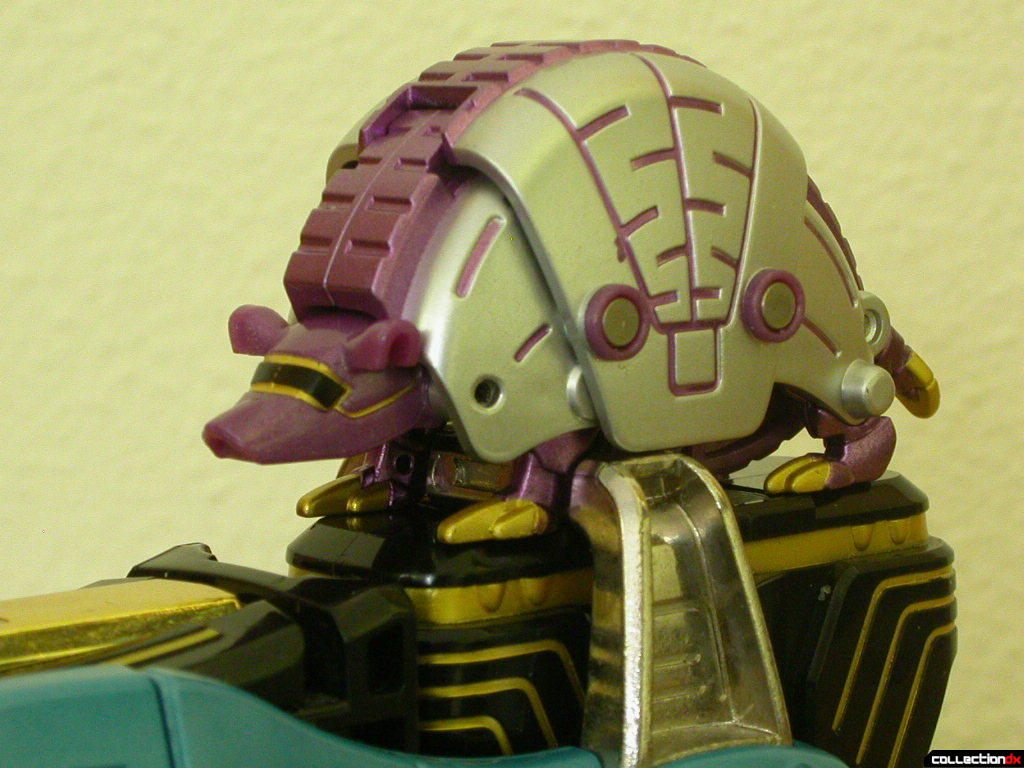 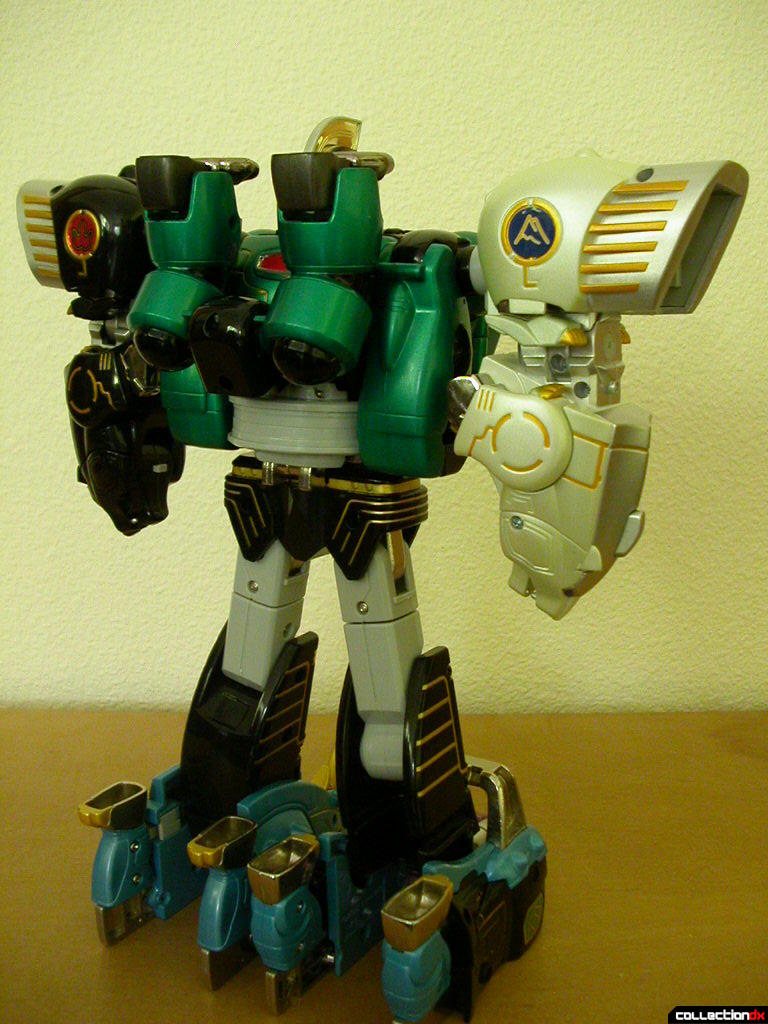 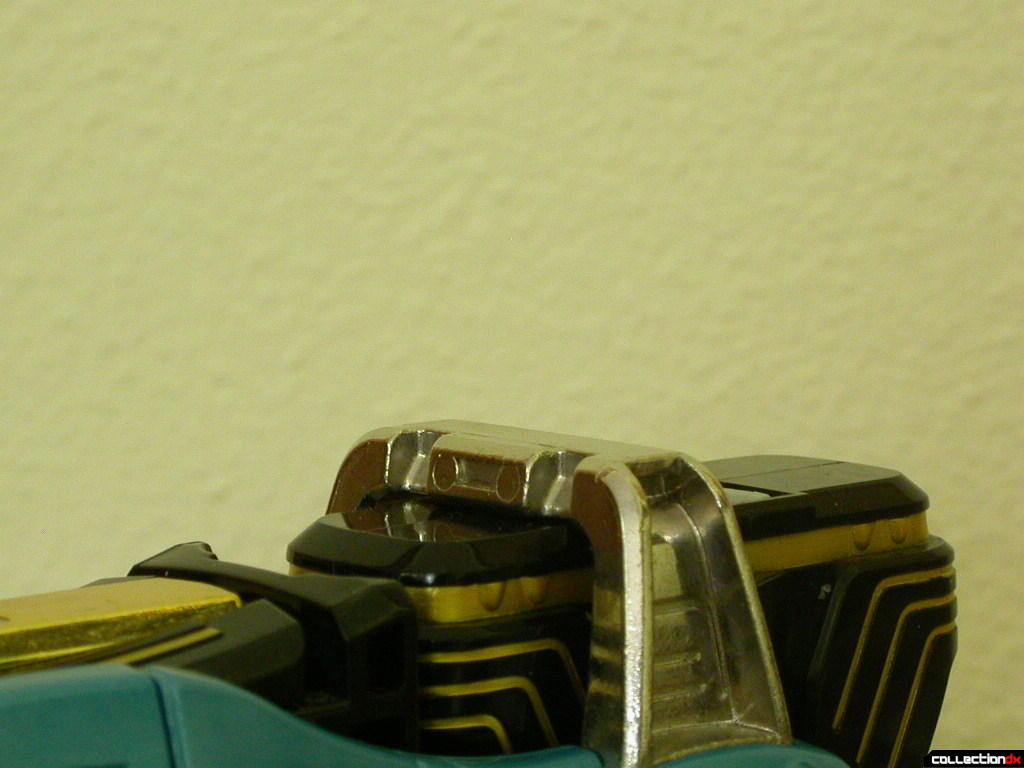 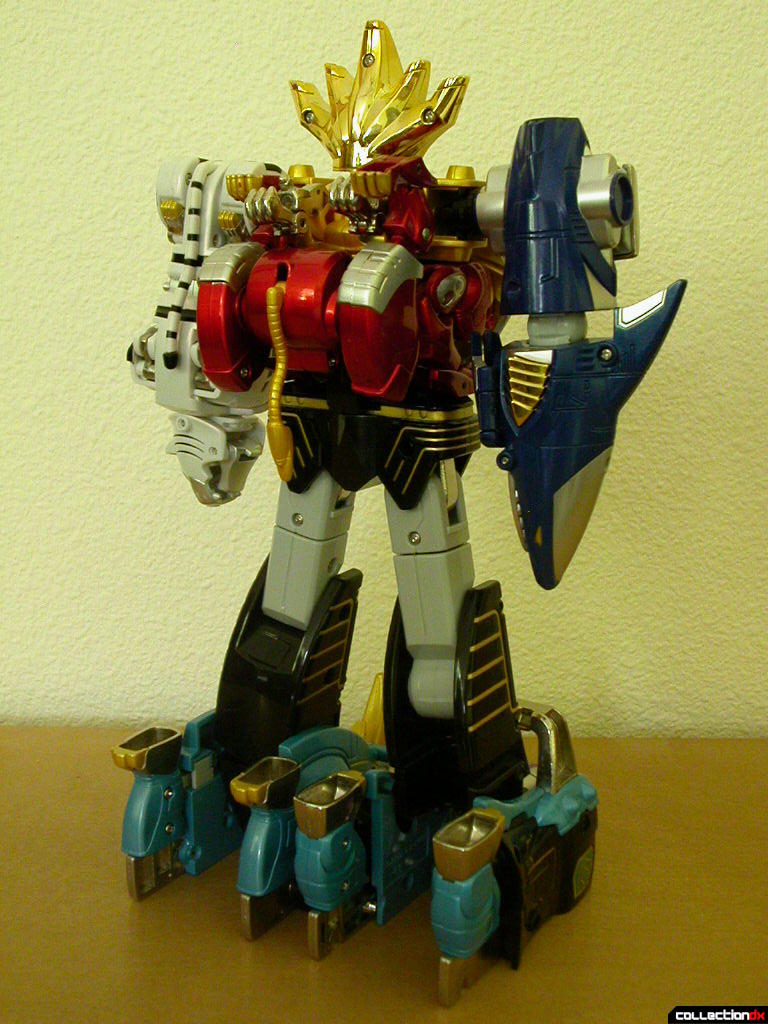 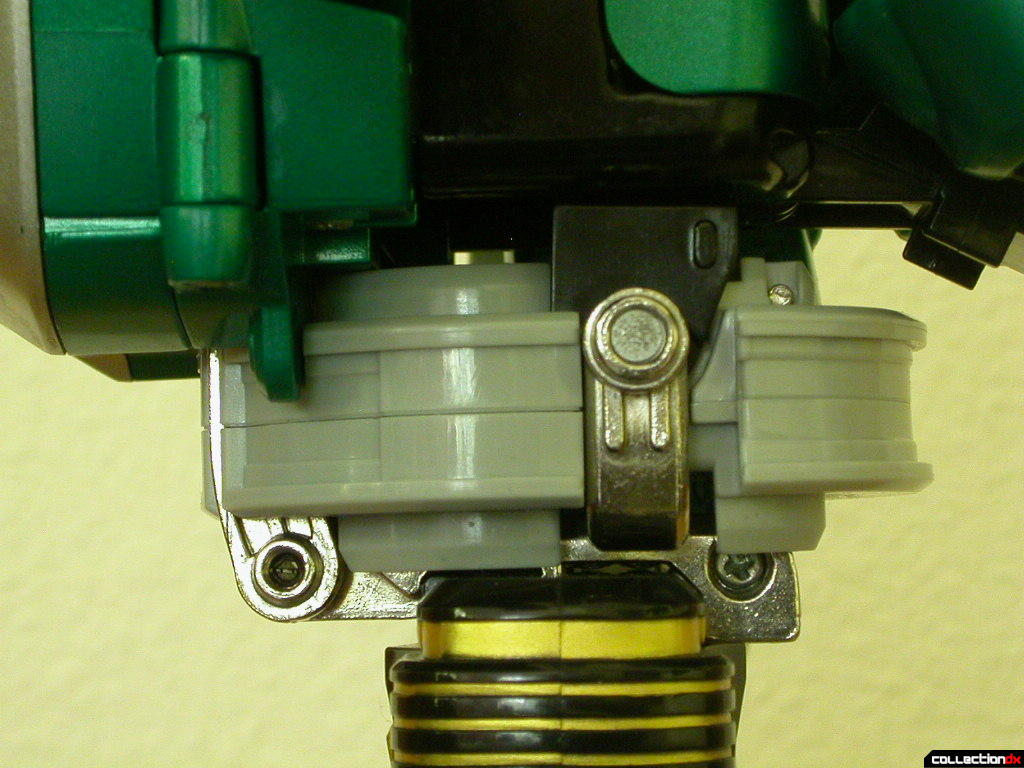 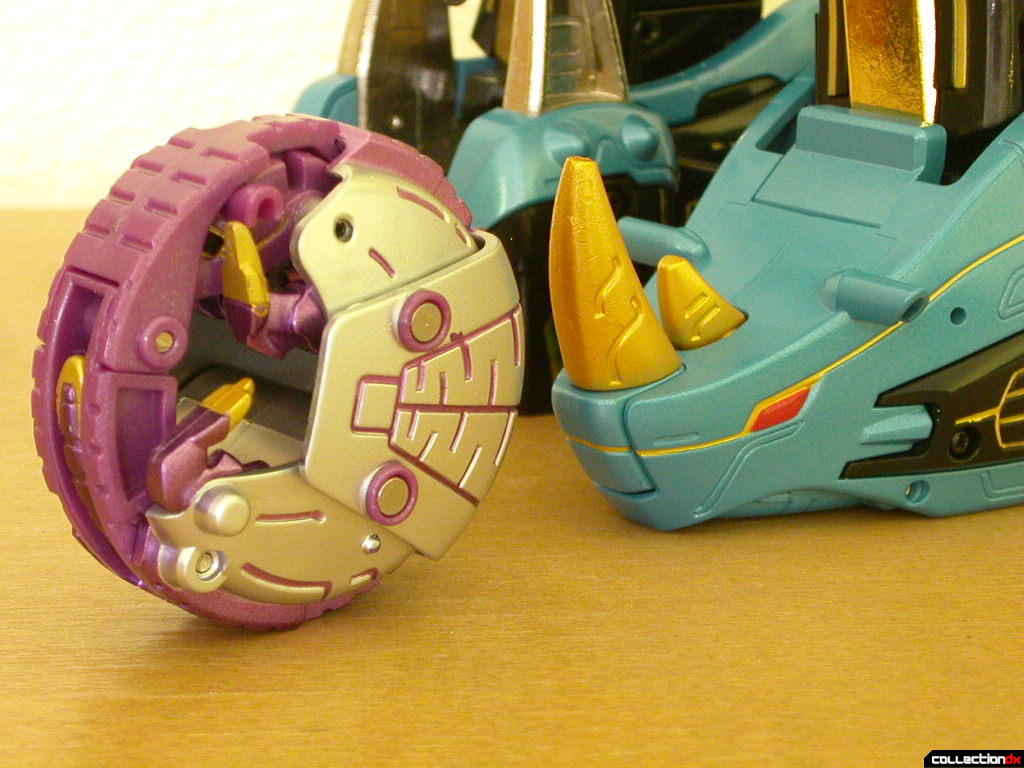 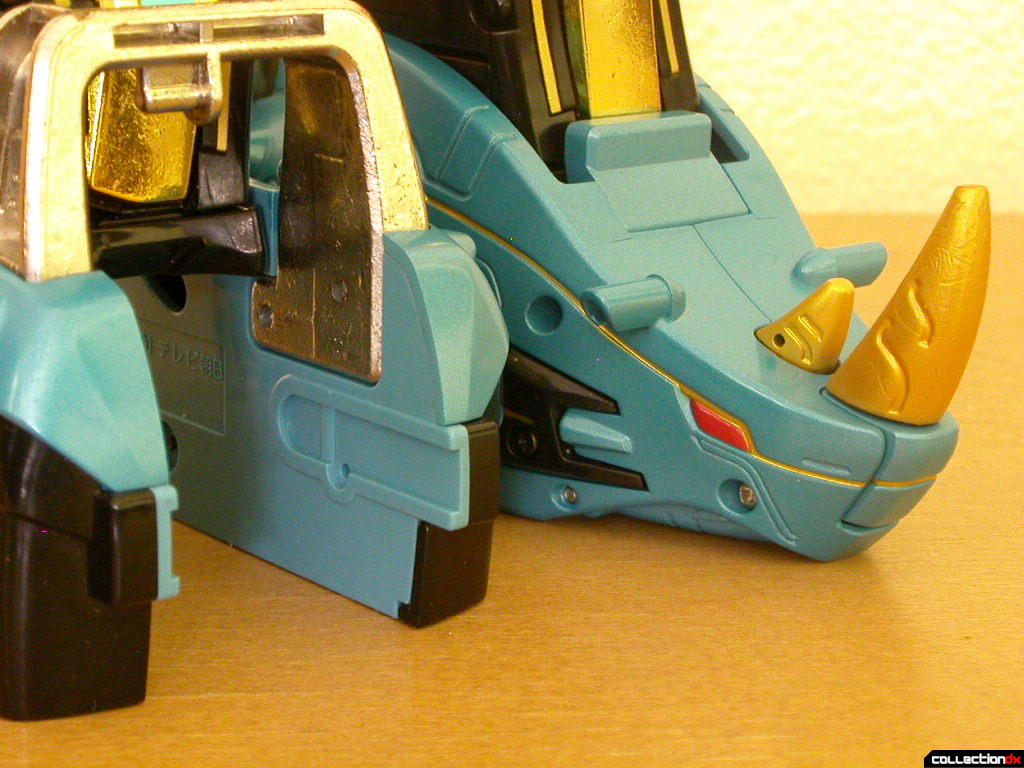 But there are still little things in these reviews that bother me, like when you mention you can use Gao Eagle for Muscle Striker, but don't even show us it as a curio (or if it is there, it's hidden away in links).

Also, those video reviews are beastly long- 18 minutes for a component figure? Wee bit draining. I wish they were paced more like your combination roundups- those are really good are showing all the combos in a short and efficient way.

I didn't show Gao Eagle attempting to merge with Gao Muscle Striker because, as you say, my videos run long enough, and so I figured it was enough for me to just say it isn't possible & leave it at that.
While using Gao Eagle in Gao Muscle Striker is possible, it's a very tight fit and there's the risk of chipping & stressing plastic 'n paint.

Actually, I thought the run time on this one was fair. I didn't ramble on as much as I usually do, and I was careful in trying to not be repetitive (did I succeed?).

This is easily my only favorite PA accessory from this series - 2 animals in 1 package, very nice transformation and having cool gimmicks at the same time.