To round out the first wave of Spider-Man Classics, Toy Biz gives us what is possibly the most unusual Venom figure to date. 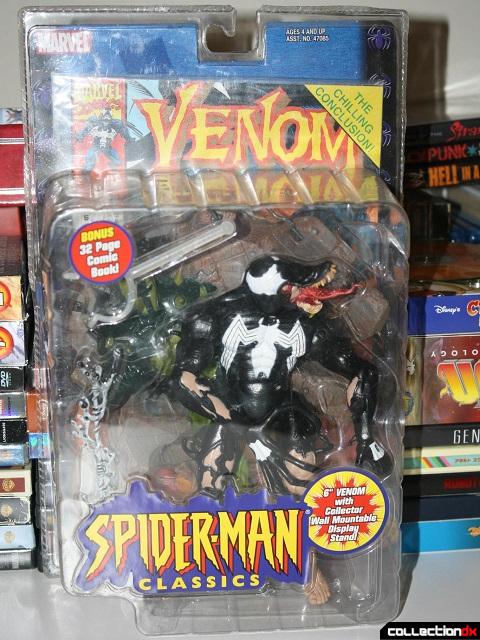 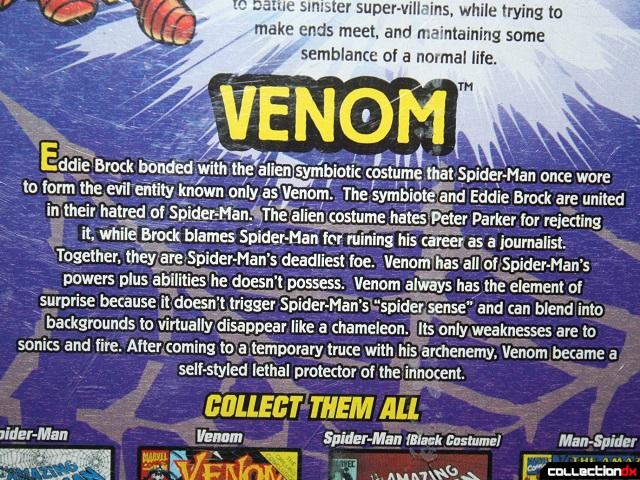 Another succinct and accurate info byte. Norman Osborn AKA the Green Goblin is Spidey's arch-nemesis, but hands down, Venom is the most well known Spider-Man villain. There's just something striking about a hero having to face their dark, twisted mirror image. And while a couple of other characters (Mac Gargan AKA Scorpion and Flash Thompson) have played the role, Eddie Brock is still the signature version. 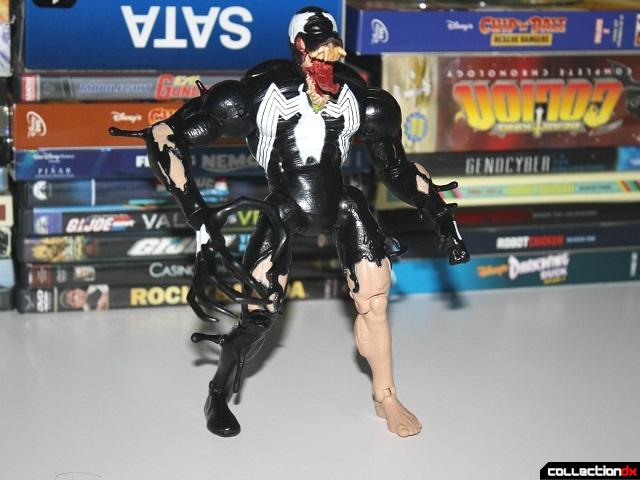 Venom standing in shambles is in reference to the events of the comic that's included. Besides that, I wonder if Toy Biz followed the logic of making two very ugly toys to make the two Spider-Man figures look much better by comparison. If so, their plan worked. 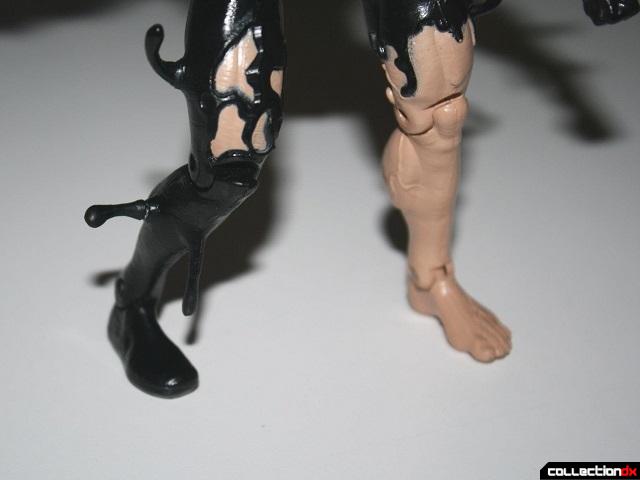 Venom is more articulated than Man-Spider, but he's not quite at the level of a "Legend" either. His feet swing at the ankles, and his knees bend pretty far back. 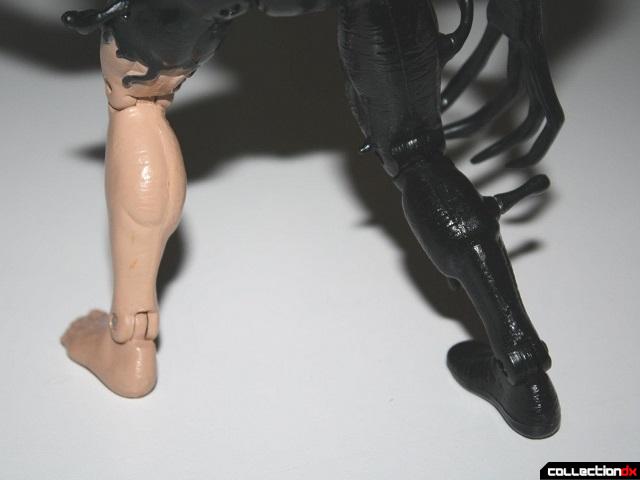 The muscle definition isn't over the top, but appropriate. Eddie Brock, the human host in this symbiosis, was an Olympic-class athlete, power lifter, and body builder before the bonding occurred. It actually is a part of why he's more powerful than Spider-Man. 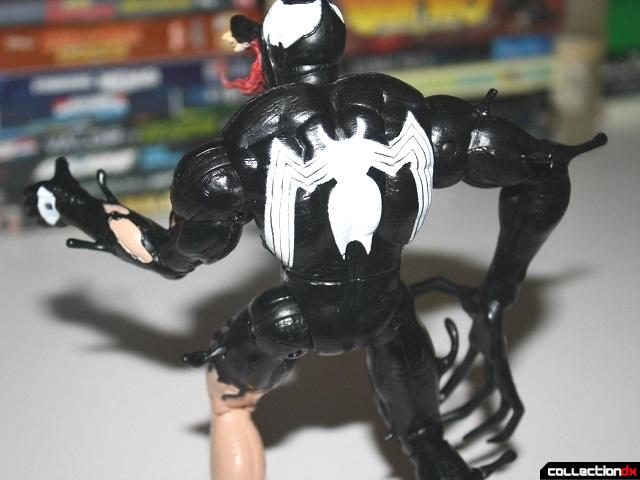 Both arms have ball joints for shoulders, but they only rotate at the elbows and wrists. I also find the texture interesting. It doesn't feel strange, but the way it looks stands out, like a thick ooze that could be as dense as leather or thin as silk. 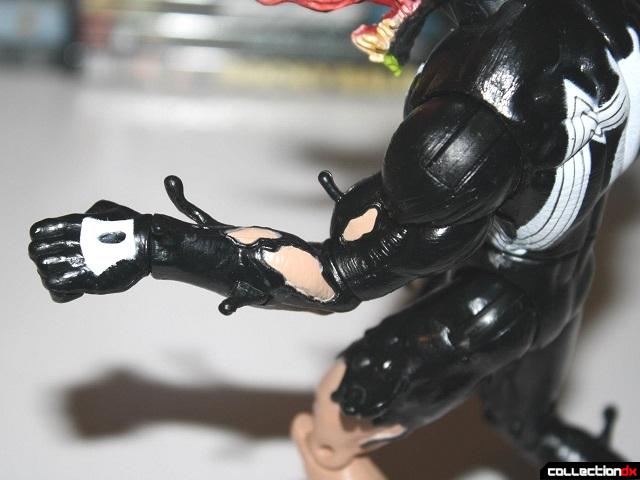 That hole in his hand is for an accessory. 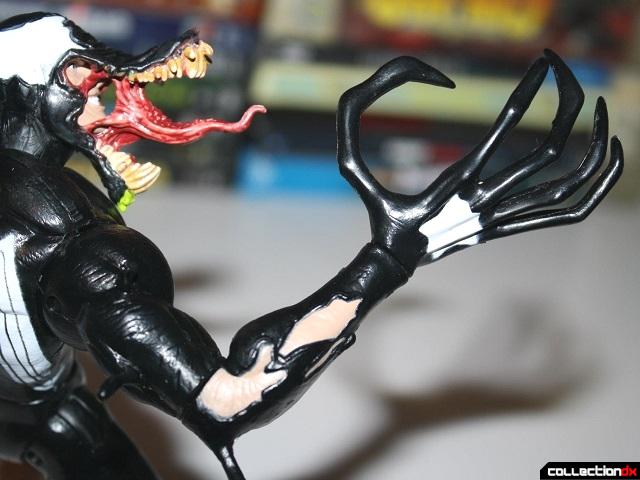 While Spider-Man had the symbiote, he merely operated with enhanced attributes. When it bonded with Brock, it copied most of Spider-Man's abilities and took them to another level. In addition, Brock learned to manifest tendrils, tentacles, fangs, and claws that are as deadly as they appear. 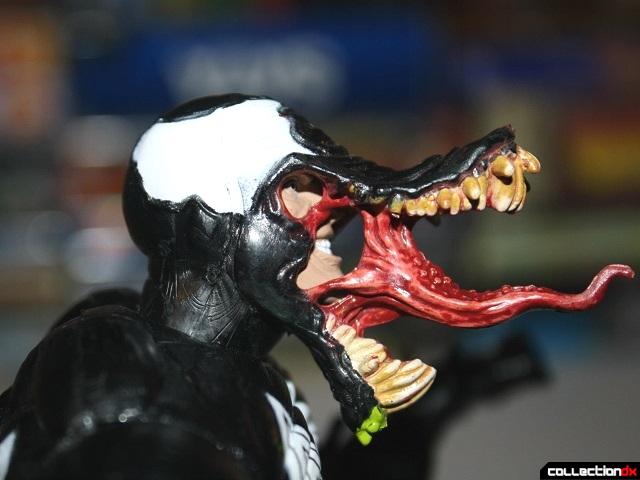 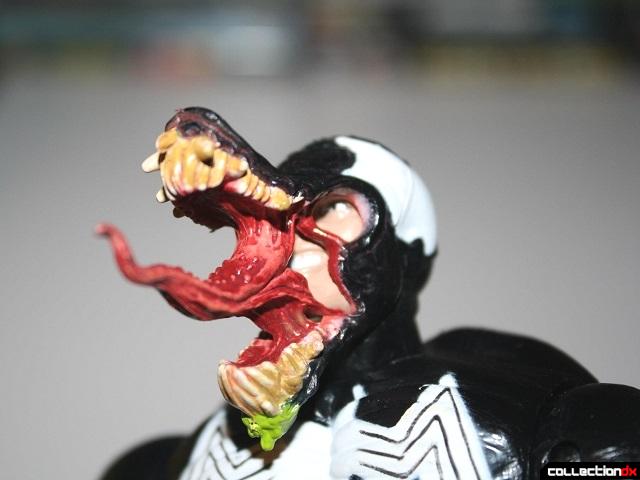 Check out the puss on this guy, mounted on a ball-joint neck. If nobody else already said it, thanks Todd McFarlane. 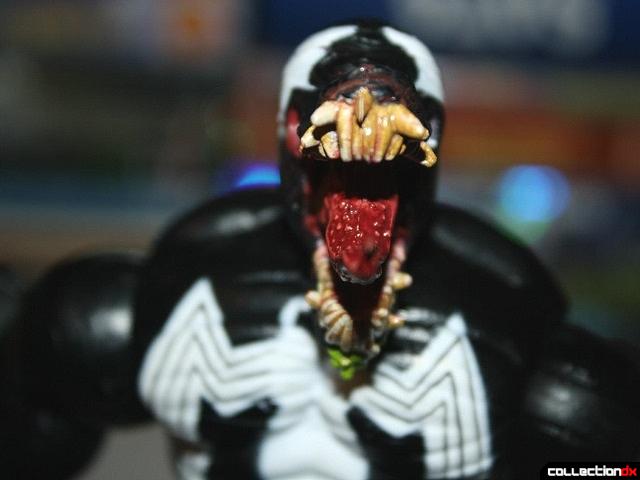 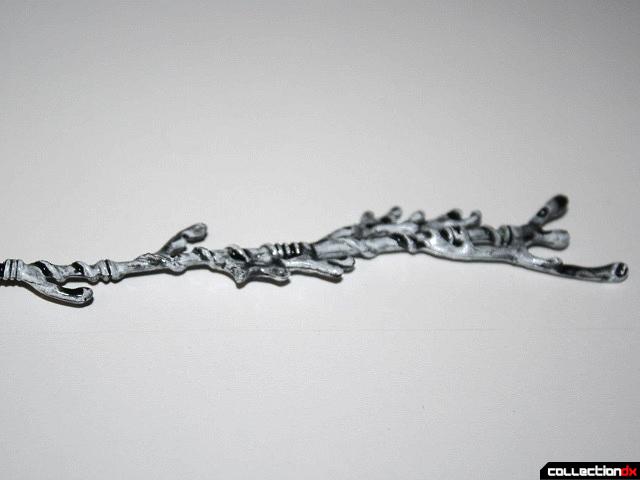 Having an accessory besides the stand makes for a first among the lethal protector's peers. It's just a strand of webbing, but it is something. 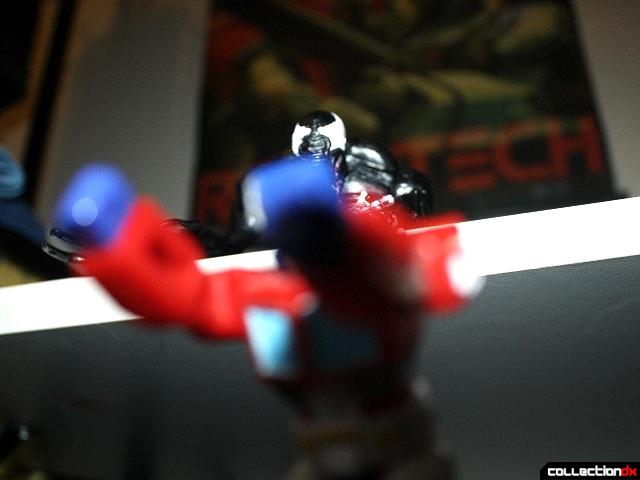 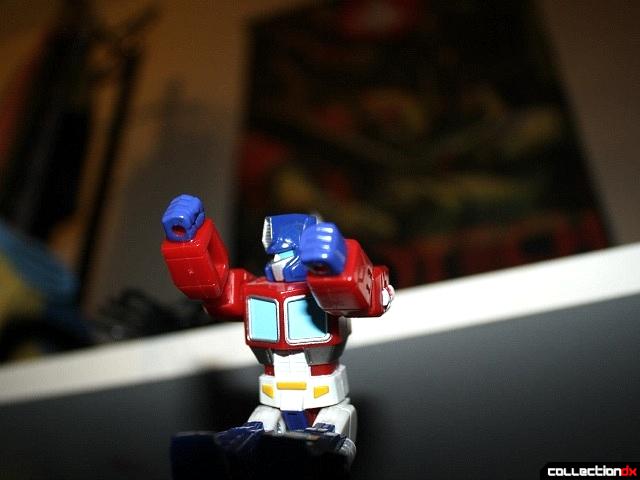 "Venom believes in protecting the innocent." 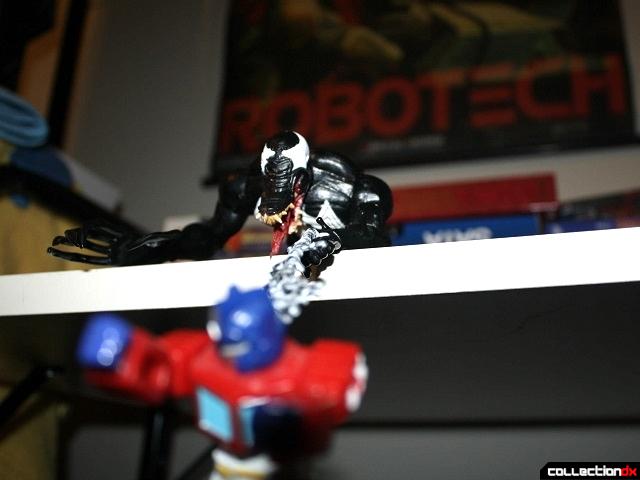 "And you are innocent, therefore worthy of saving." 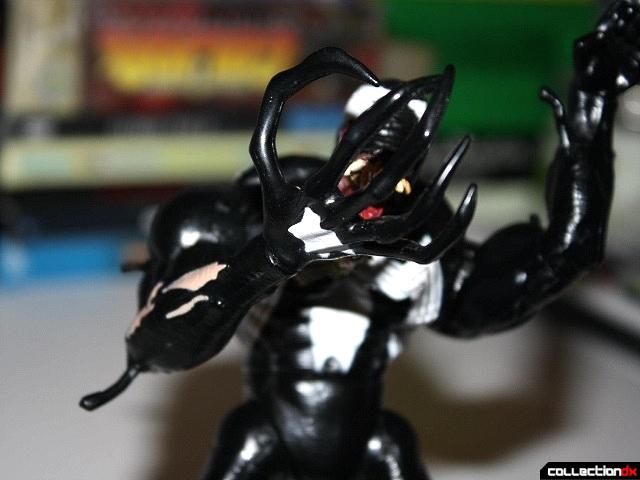 Five Knuckle Shuffle. Because Venom is all about hustle, loyalty, and respect. 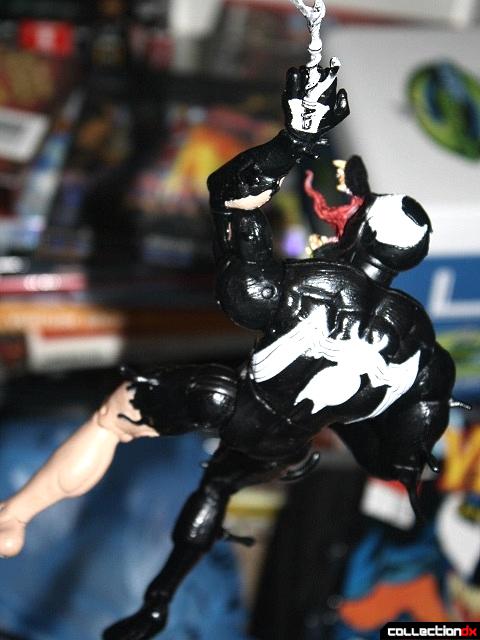 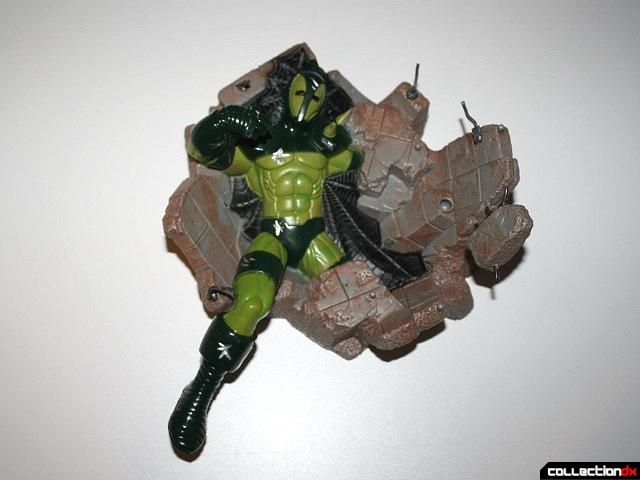 He's the second biggest figure out of the wave, and he gets the biggest stand. It's a Guardsman, a federal operative wearing armor based on designs by Tony Stark AKA Iron Man.

Again, there's a post for a support bracket. But it seems like it'd be too hard to take back out. And it braces Venom's crotch, which is kind of weird, so no thanks. 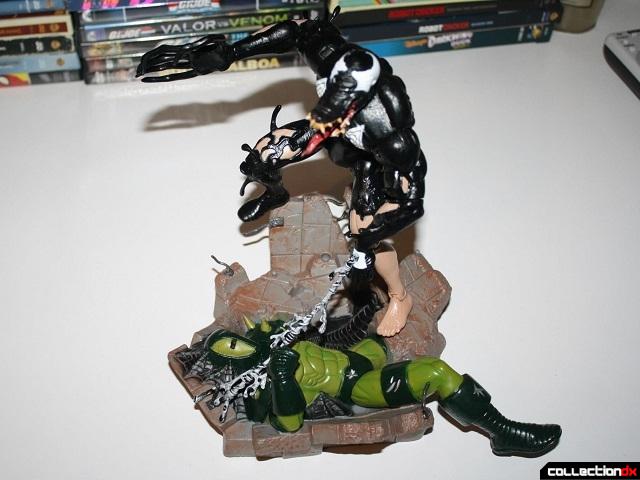 There are two slightly different ways to fix him on the stand, so here's one of them. 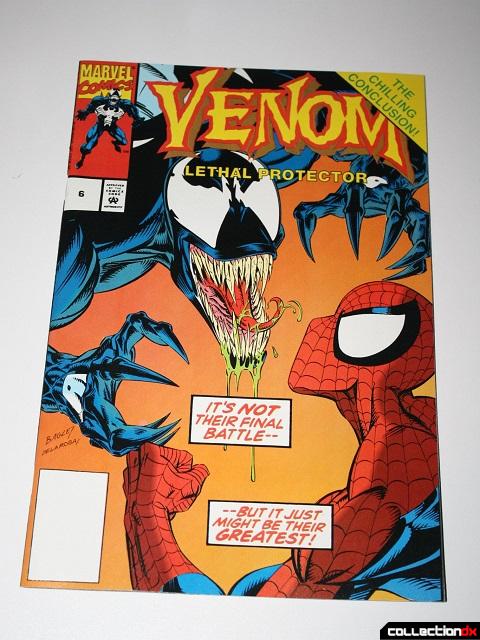 Venom: Lethal Protector #6 was released in July 1993. It's the last part of Venom's first mini-series, his first solo book. Previous to now, he'd only existed primarily as a villain in various Spider-Man comics, but this set a new status quo.

When all is said and done, things stand with Venom now serving as a resident superhero of San Francisco, holding an uneasy truce with Spider-Man. It's a pretty good read, especially if you like Spidey or Venom. The TPB is rare and kind of hard to find, but you can easily get the whole mini from a bargain bin for $6 - $8. Including this reprint, I now have 4 copies of this issue. I also have the original, the TPB, and a reprint in an issue of either Spider-Man Family or Amazing Spider-Man Family. 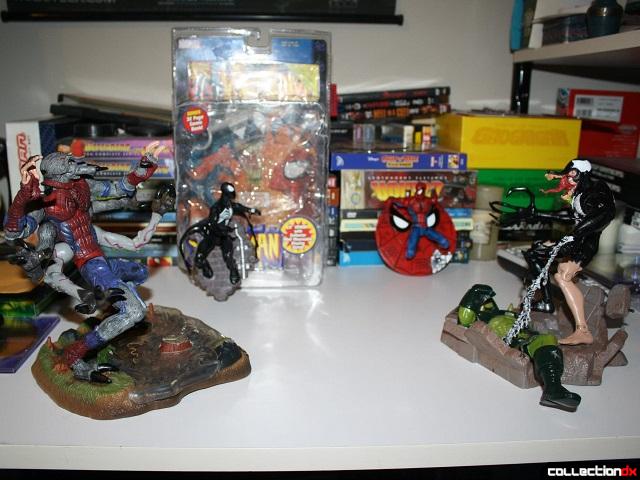 The entire series I gang is here. 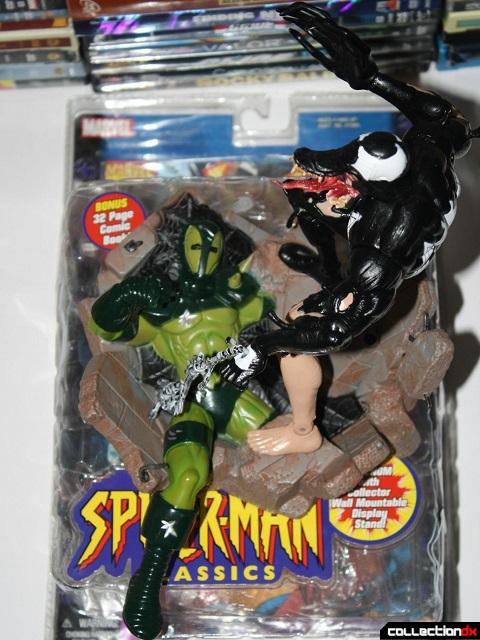 In conclusion, this is a pretty good Venom figure, not great, but definitely unique. For $15, he's not a waste of money. He's only one of three Venom figures based on the comic book version of Eddie Brock produced via Marvel Legends (as of this review), the other two being part of a Sinister Six box-set and a 12-inch figure. He does have some paint chipping happening, but just barely. Besides that and the awkward features, he's all right by me.

3 comments posted
That is the ugliest Venom

That is the ugliest Venom figure ever produced, IMHO.

I think this is a "What If" variant, where it's implied that this figure comes from a universe where the symbiote chose to bond with Howard the Duck.