Of course, if the line is called Spider-Man Classics, there's going to be a Spidey figure somewhere in there. And I doubt almost anyone needs an explanation on who this man is. Even if you haven't read one of the thousands of comic books out there, you've probably seen at least one cartoon episode or one of the movies. 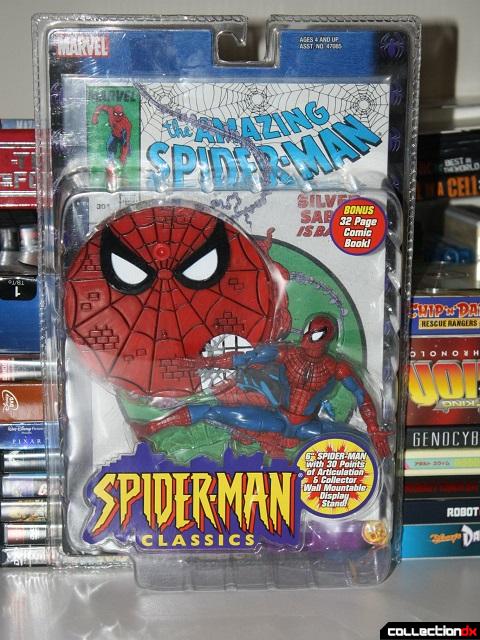 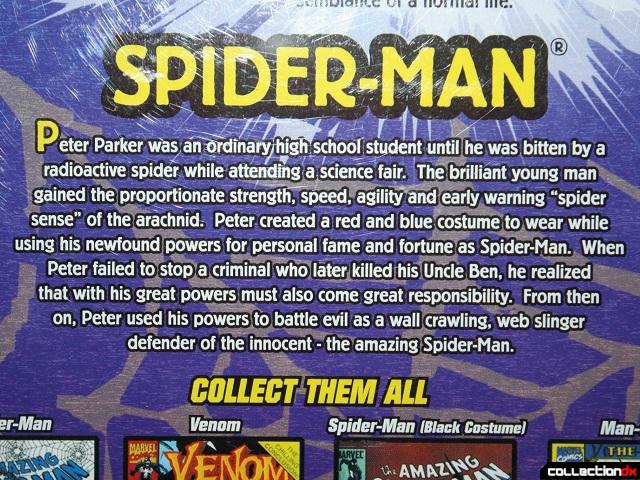 The wording gets a facelift every so often, sometimes going back to what it was, but this is pretty much always the gist of his origin. 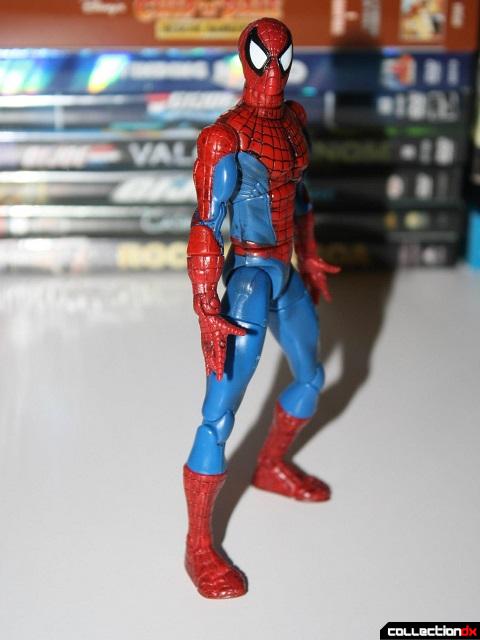 The man, the myth, the legend...the Mario!

Actually, that's a different red-&-blue guy, but he's also from New York. Be wary of my bias now, because I LOVE Spider-Man! He's one of my three favorite super-heroes of all time, up there with Batman and Iron Man.

I always felt like sort of a nerdy, brainy kid in school, so that's a big part of why I relate to those three. They're all scientists as much as they are heroes or anything else. 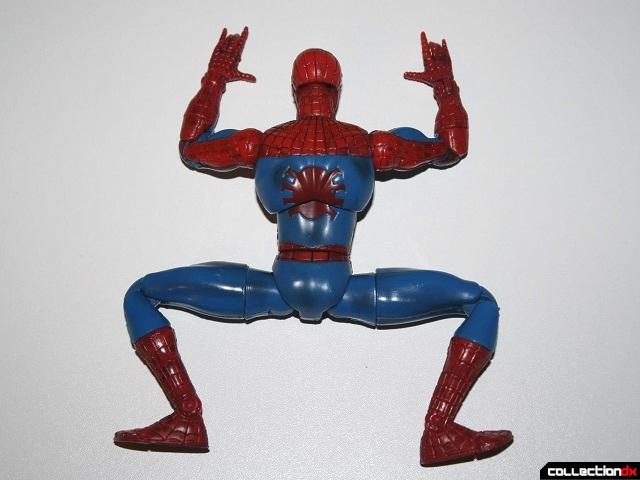 So can this wall-crawler crawl or what? This Spider-Man toy demonstrates the commitment Toy Biz made to making great action figures, and you can really see it here. Though the package claims he has 30 points of articulation, I count 26 every time. Regardless, there's pretty much nothing he can't do. 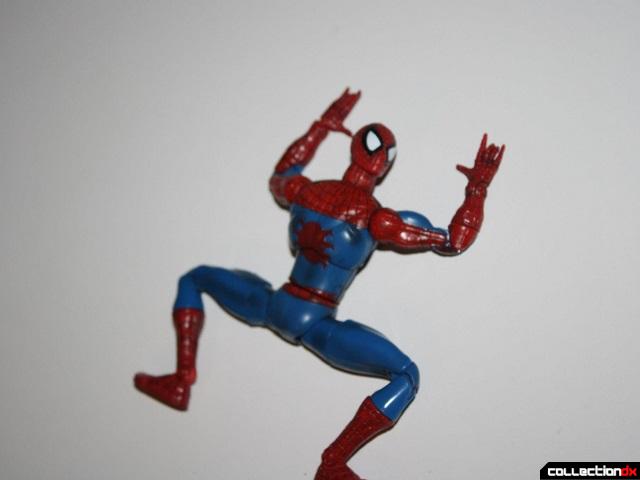 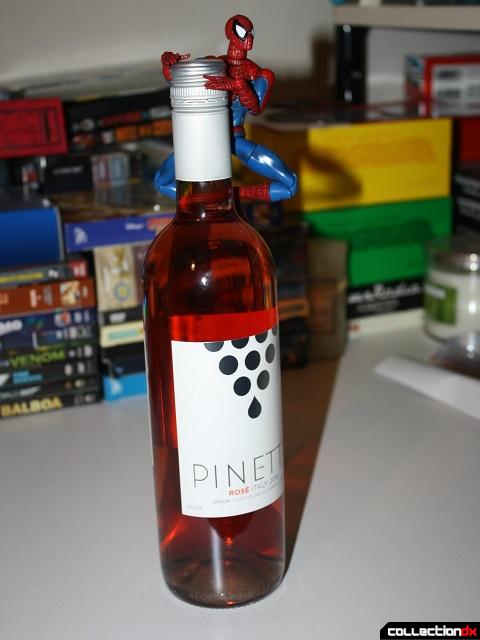 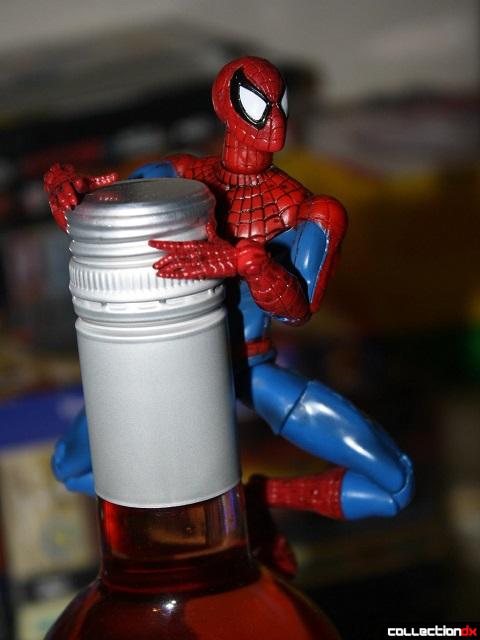 If this was Spidey from Twisted Toyfare Theatre, he'd be in heaven right now. 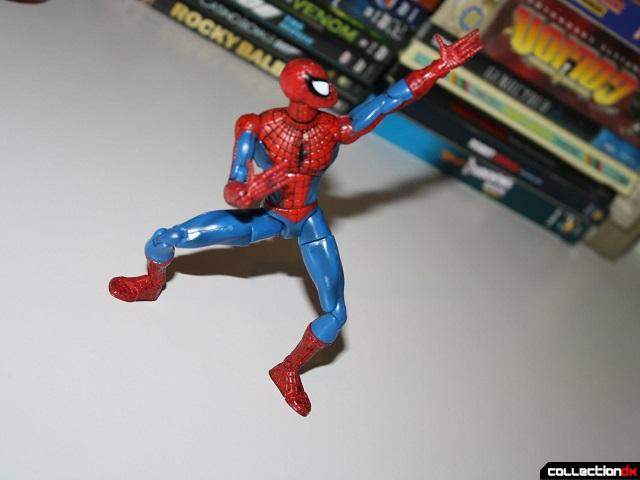 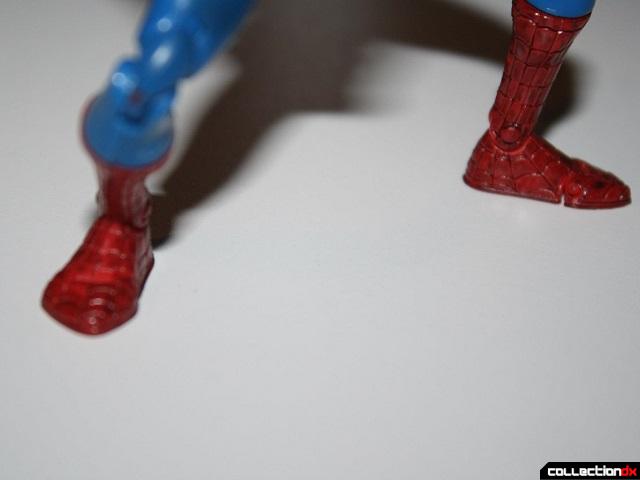 His feet bend at the toes, and swivel back and forth at the ankles. His forelegs rotate at the top of his boots. 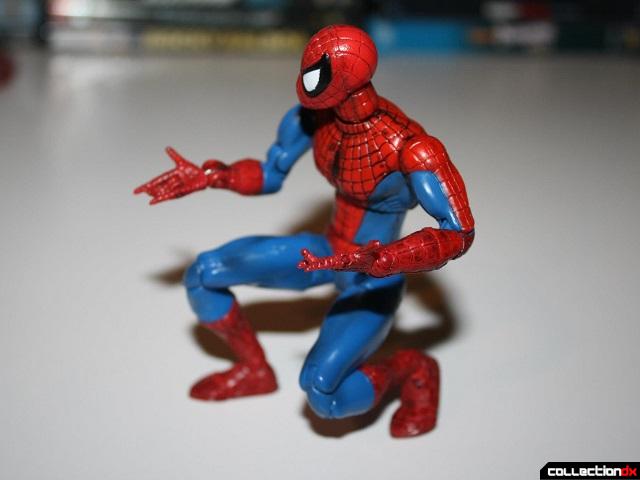 His knees bend backwards all the way. His upper legs rotate just above his hips, and his hips have full 360-degree motion. 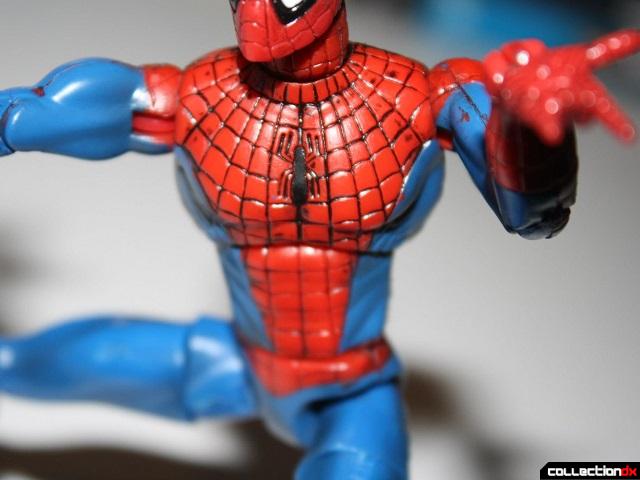 His waist rotates all the way around, which is fine when you consider how flexible he is. His upper body leans forward and back, just below his chest. 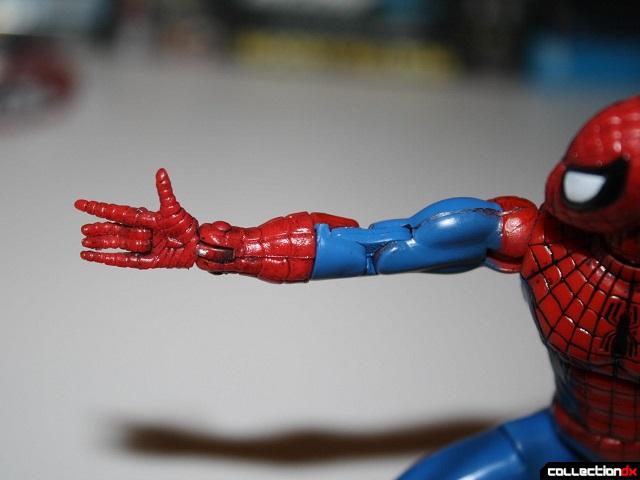 His arms swing 360-degrees at the shoulders, but are static. They bend at the elbows, and his forearms rotate just above his gloves. 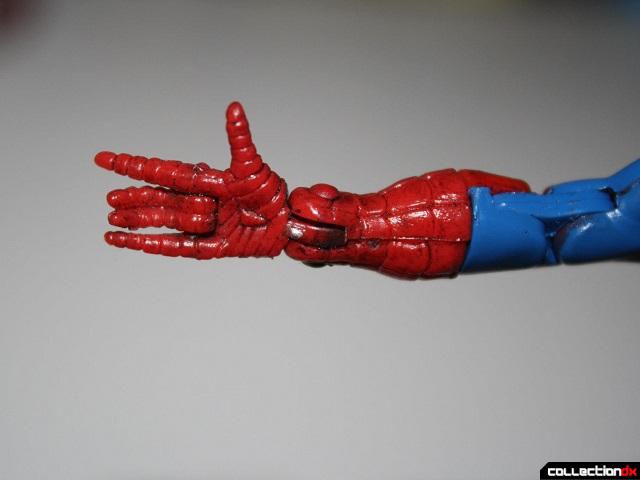 His hands swing back and forth at the wrists, all the way. Also note the bulges in the center of his palms. Those are the triggers for his web-shooters, underneath his gloves. 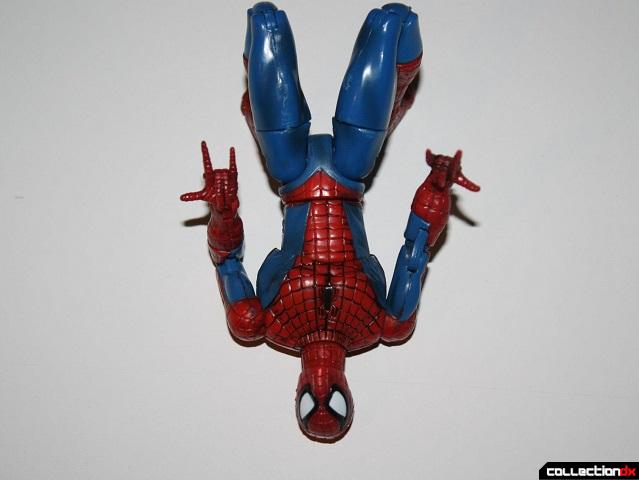 And his middle fingers bend into his hands, to simulate web-shooting. 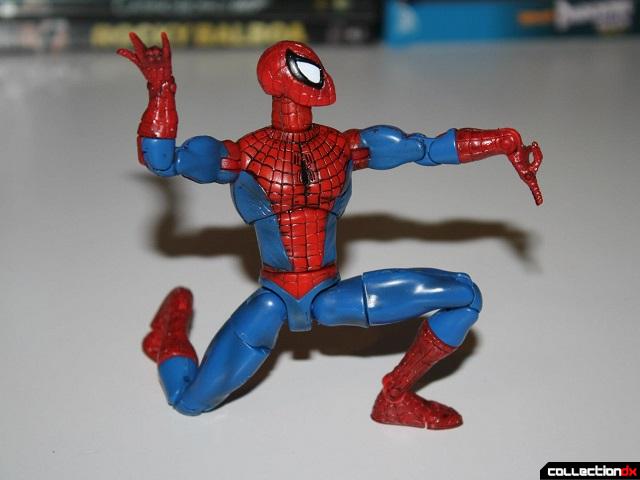 You can actually see the nozzles sticking out of his gloves above his wrists, where they should be. 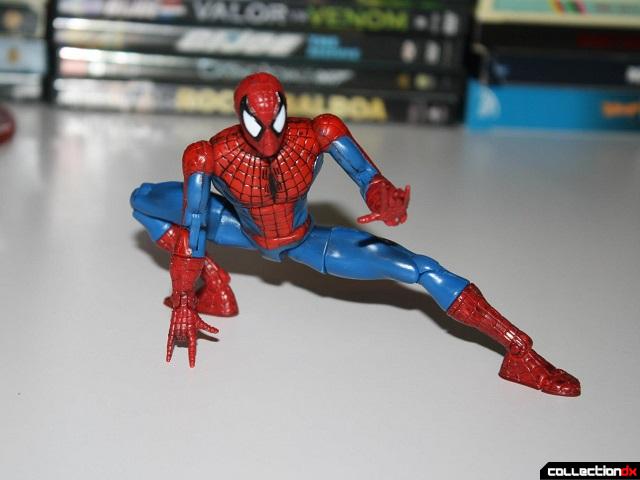 If you've never seen what his web-shooters actually look like, you should look it up. The design is fascinating. The reason he uses his middle fingers when shooting them is because the trigger is highly pressure sensitive. That's how he avoids accidentally firing them off when he's doing anything else: punching, climbing, swinging, etc. 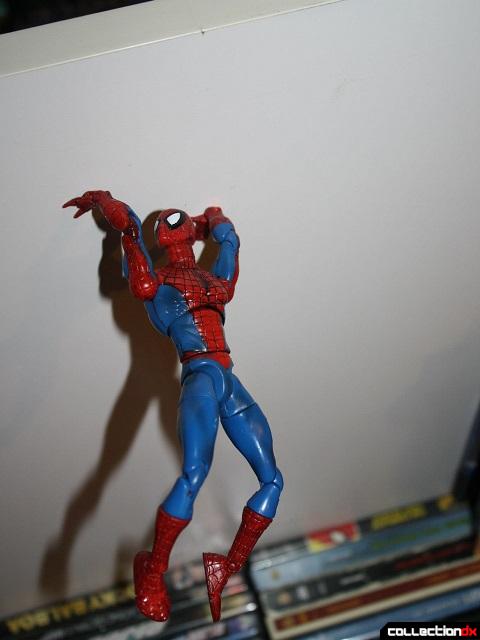 Trick photography, I know, but I'm on a special effects budget of $0 here. 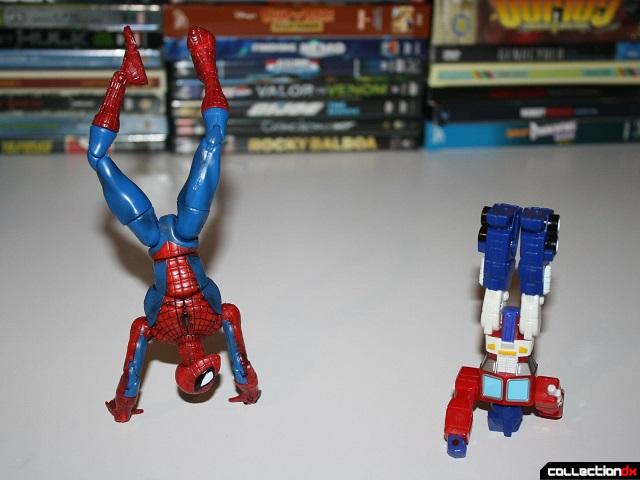 Showing AM Optimus how to steal the show, just like Dolph Ziggler. 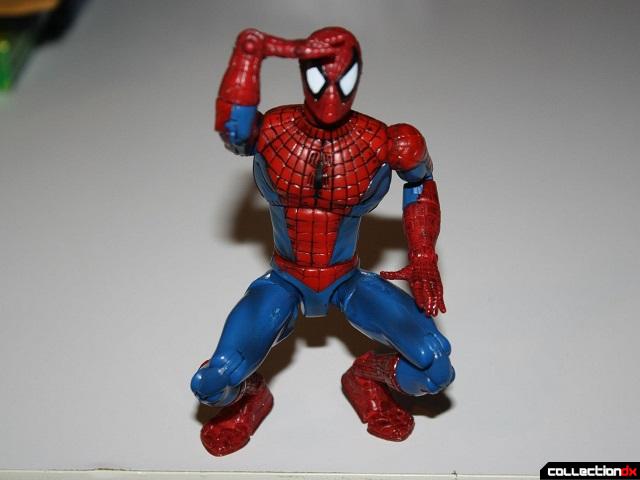 Can't see his house from here. 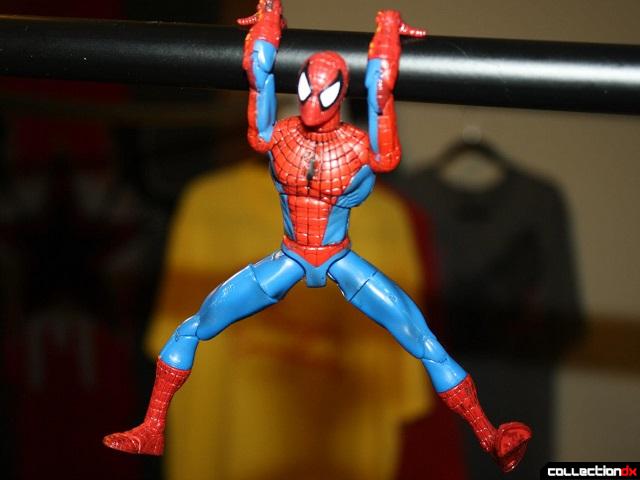 Can't see it from here either. 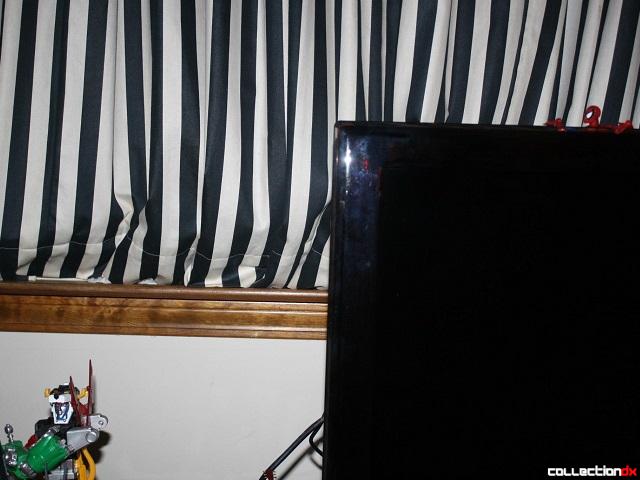 But he sees something that's pretty cool. 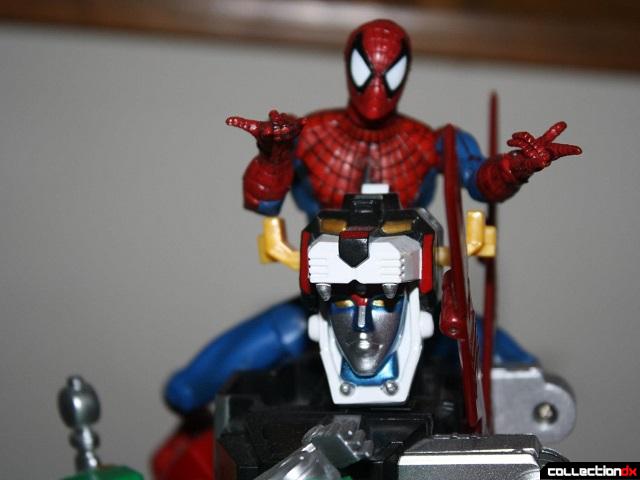 Spider-Man/Voltron: the team-up nobody asked for, which is one of many reasons it'll probably never happen. 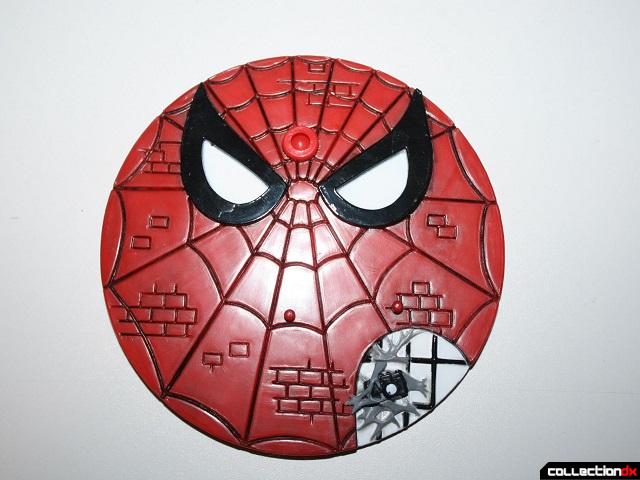 There are two things going on with this display stand. First and more so, back in the day, Spidey had a light built into his belt buckle that projected this. Sort of his way of announcing himself to goons he was getting ready to trounce. And you can tell it's a brick wall with his camera webbed up for taking pics.

Second, this is also homage to the early days, when Stan Lee still wrote Amazing Spider-Man. Often, when stories ended on a happier note, the background of the sky would be filled with a similar image of Spidey's mask. They used the effect pretty often at the end of most episodes in Spectacular Spider-Man too. 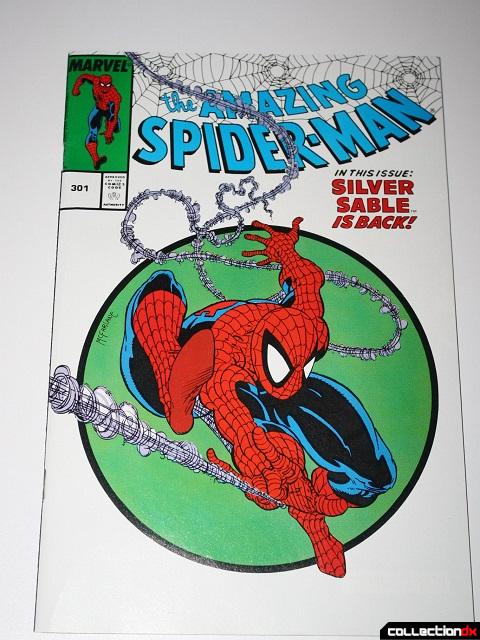 Since this was sort of a standardized Spider-Man figure, I guess they had to spin the wheel to decide what issue to include with the toy. Amazing Spider-Man #301 came out in June of 1988. Nothing too huge was happening here, other than a return appearance by Silver Sable.

Besides that, it's noteworthy for being an early issue in Todd McFarlane's run on the book. This series is part of what launched him into super-stardom, and is one of many factors that led to the birth of Image Comics.

Oh, and I just remembered, this cover is pretty significant from an artistic, trend, and historic standpoint. The cover to #300 had the exact same layout, but the background outside the circle was plastered in the number 300. And inside the circle, Spider-Man was still wearing his black costume. That issue marked the end of his first series of encounters with Venom, and it's why he switched back to his original outfit. Since then, this layout has been revisited and paid tribute to a number of times, and not just in Spider-Man comics. 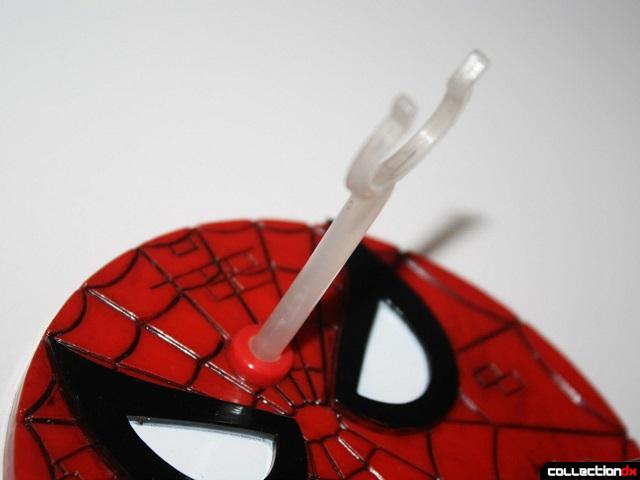 I only noticed this at the last minute. It's a support prop for helping to pose Spidey while this is actually wall-mounted. It works perfectly fine, but to me, it stands out too much in a bad way. And the toy is so well balanced and jointed, you don't really need it. 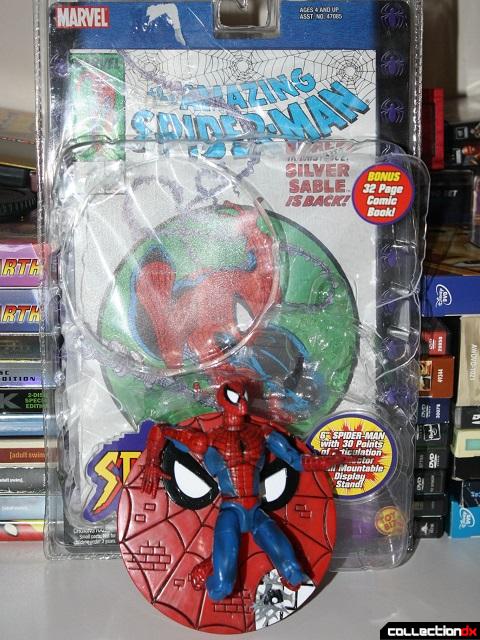 So first, the bad. In 2000, this was definitely one of the best Spider-Man figures out there. But since then, I'm sure better have been made. There are a couple of places where you'd expect joints, and none are to be found. And it could be age or just the one I got, but there is some paint flaking going on. I only saw the flakes as I was taking pics, but now I see where they're coming from. The paint for the web pattern in his costume is hit or miss as well, though you could write that off as signs of a worn costume.

All of that said though, these complaints are minor. Again, might be bias, but this is all fun! It's Spider-Man all the way! And I got it for only $15. If you can find it and there isn't another take on the character you have to have instead, go for it.