In 2000, Toy Biz all of a sudden realized they could actually make action figures that weren't just good, but great. This began with a new toyline called Spider-Man Classics, which is pretty much what it sounds like. Each figure also comes with a wall-mountable display stand, and a reprinted comic relevant to the included figure. 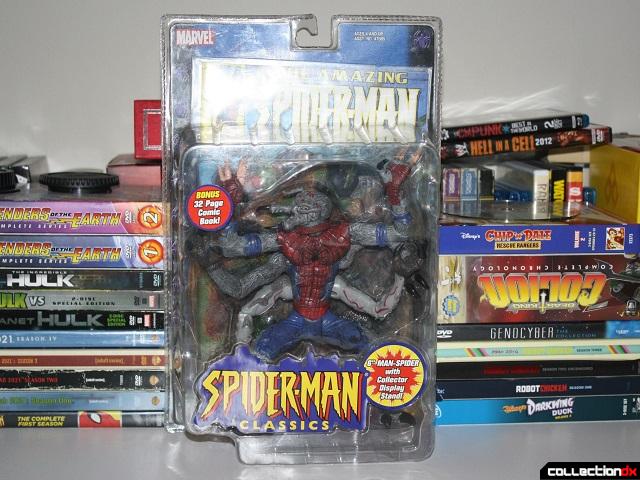 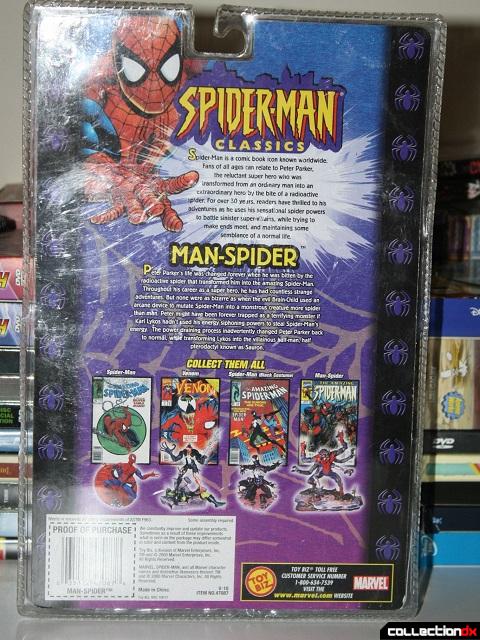 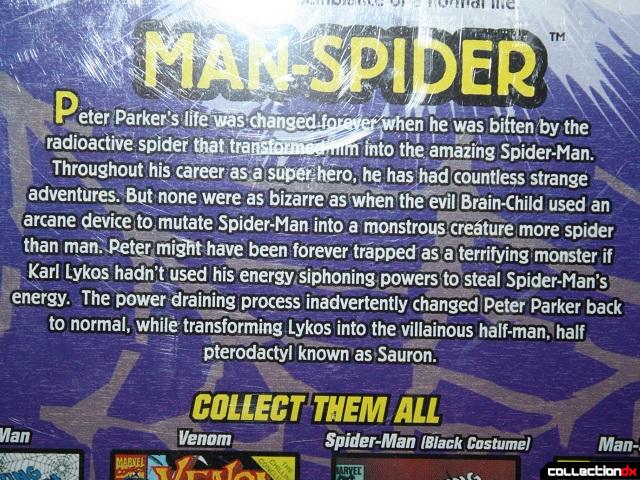 The description on the back of the card is accurate, but in truth, the Man-Spider was really made famous and put on the map by the Spider-Man animated series of the 90's. And curiously enough, the reprinted comic is not the story line you're reading about here. It's not even related to this version of Man-Spider, who debuted back in Marvel Fanfare #2, released in May 1982. 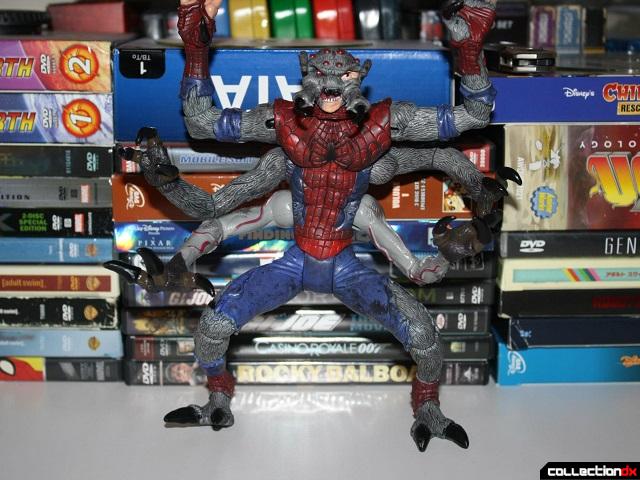 First thing that comes to mind: FREAK!! Just absolutely ugly, hideous, and grotesque. Which is what he should be, but still, it's hilarious to look at. All the sculpting, paint and coloring is great. Even the damage to his costume is perfectly applied. Nothing is amiss. 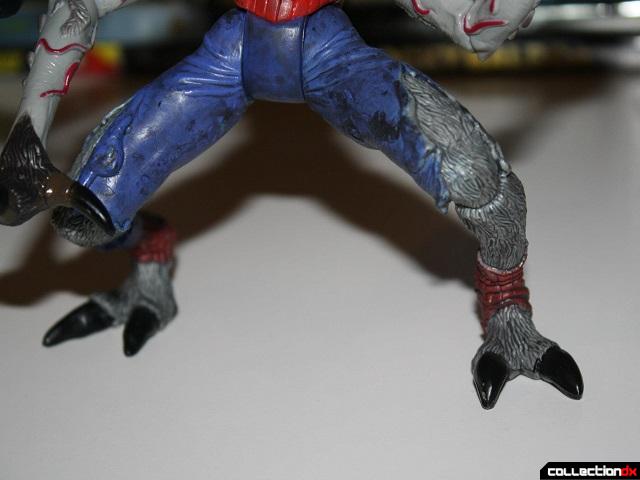 I am disappointed that the articulation on him isn't better, but this was the beginning of Toy Biz's "legendary" run of Marvel Toys, so I'll give them a pass this time. It could have been amazing though, pun not intended. As is, all eight shoulders and his neck are ball-jointed, he has an ab crunch, and his hips, all of his elbows, wrists, and forelegs swivel. 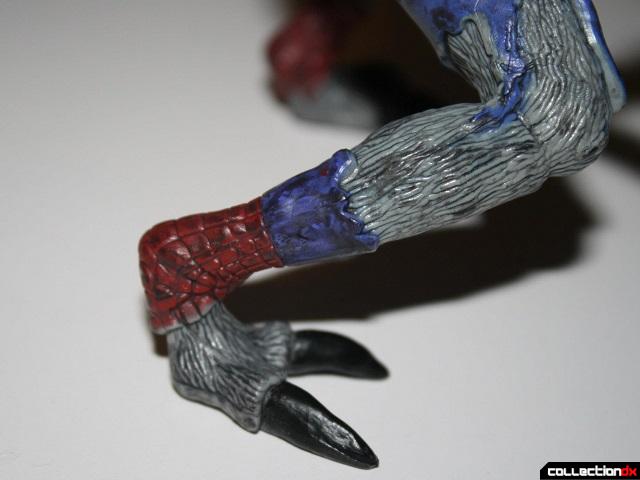 The bottom of his legs only swing at the hips, but their arc helps him stay stable as long as he's not leaning too far back. With all those shoulder joints, you can get him down on all eight feet, but you can't really turn his head up. 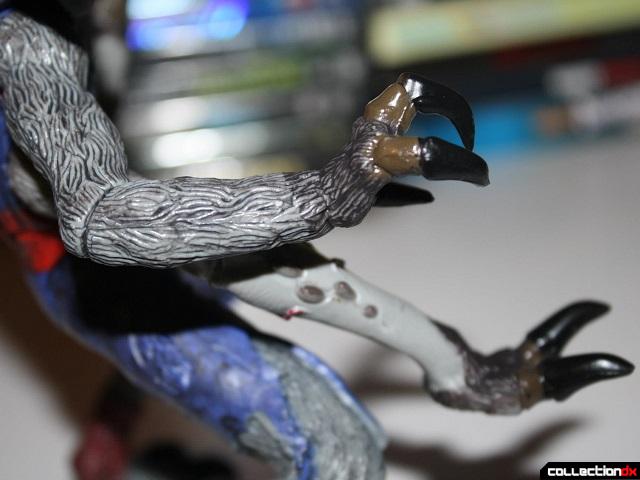 Just yikes! He probably wishes he had leprosy instead. 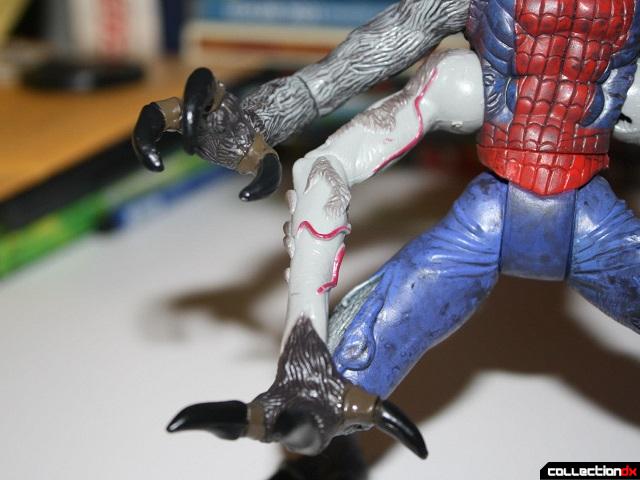 If he was all furry, like a tarantula, it wouldn't be so bad. But it's like he's in the middle of being human and a spider. That's exactly what's happening here, only in a bad way. 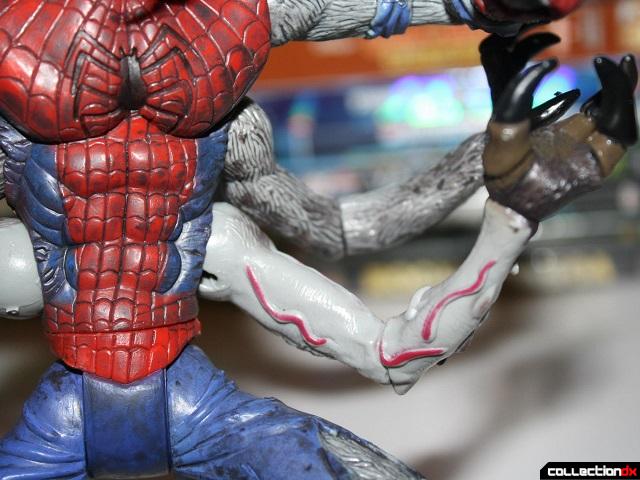 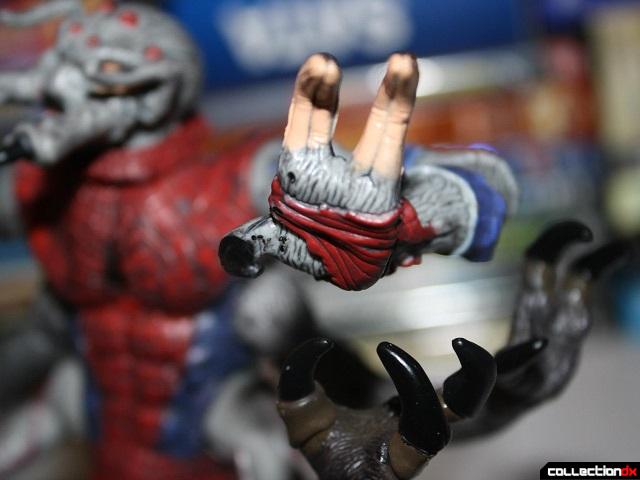 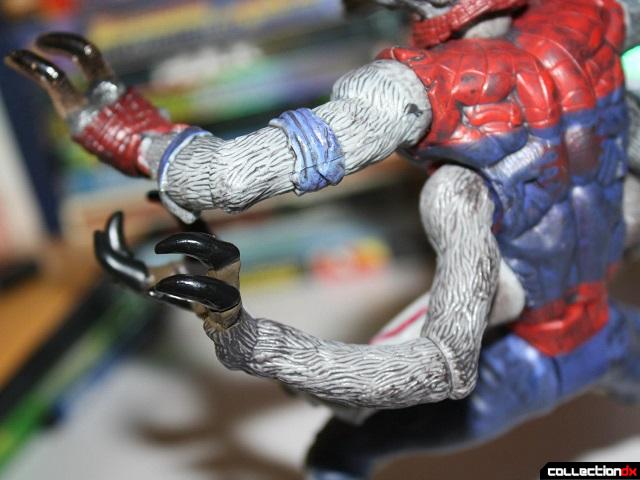 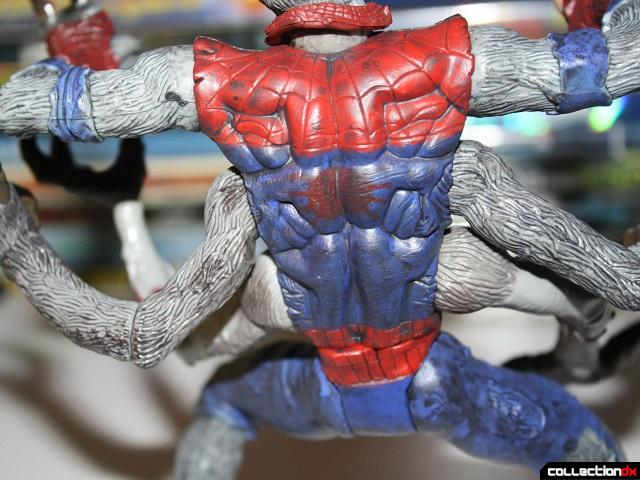 The other six arms rotate freely at the shoulder joints. 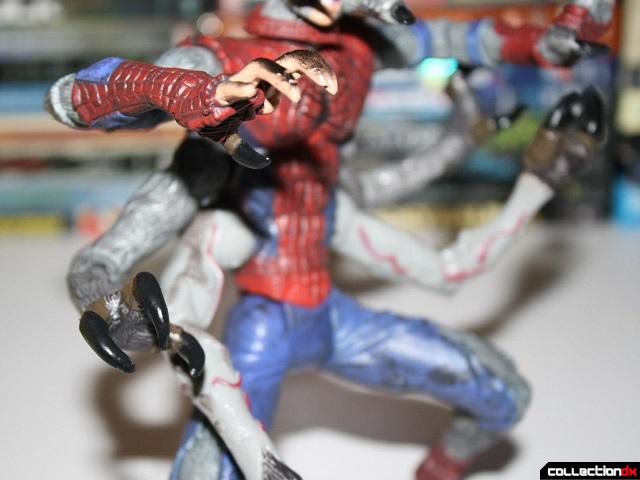 His fingers are turning into claws, but they're half-way too, so it just looks gross and hairy. 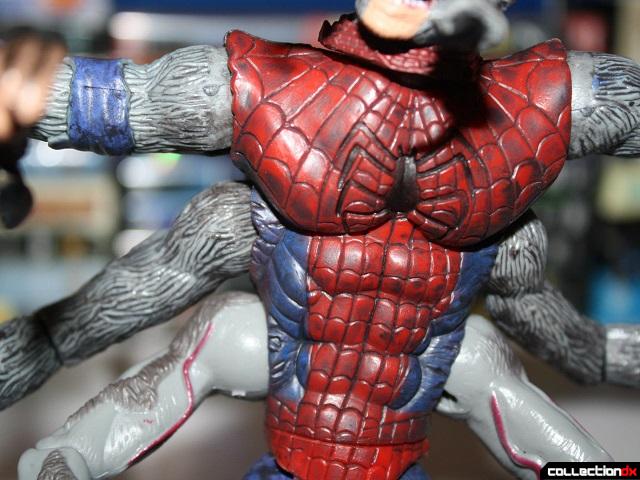 At least his shirt's still decent. 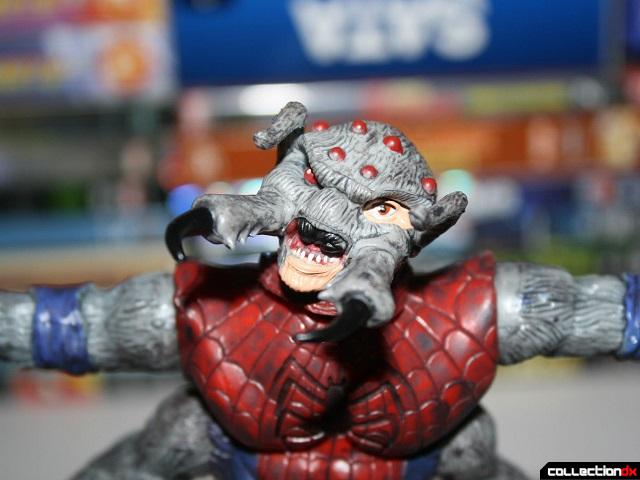 He's become a mockery of man, I tell you!! Wretched flesh, corrupt and abominable! 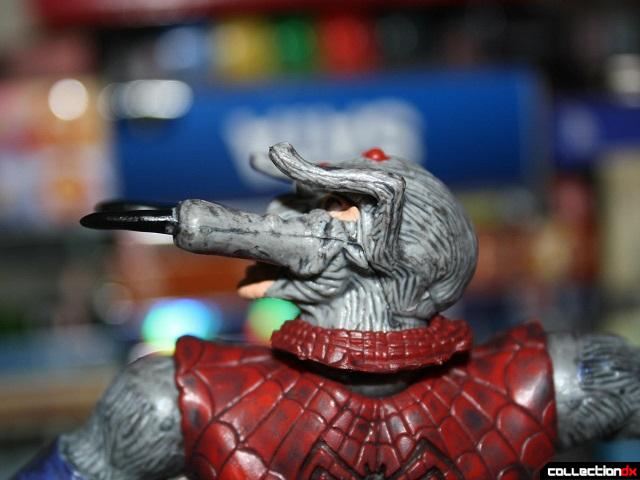 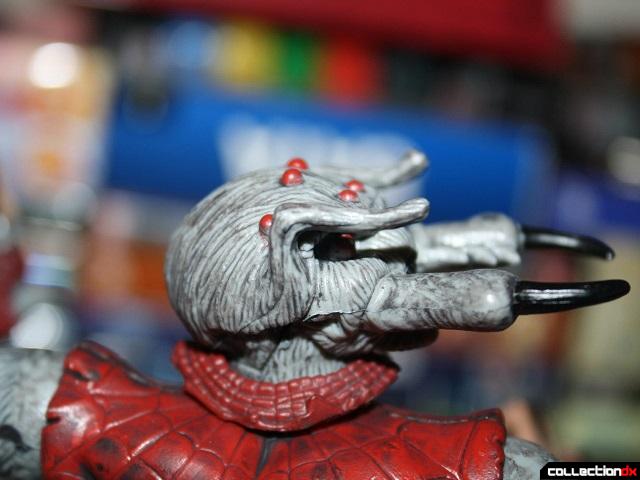 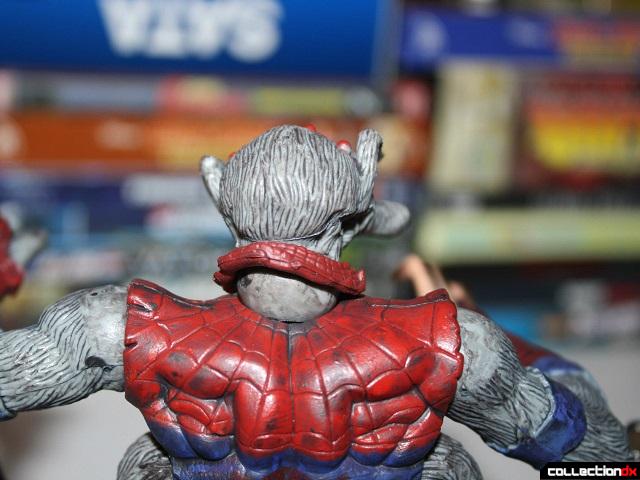 If this was store-bought clothing, I'd speculate he tried to tear the tag out. 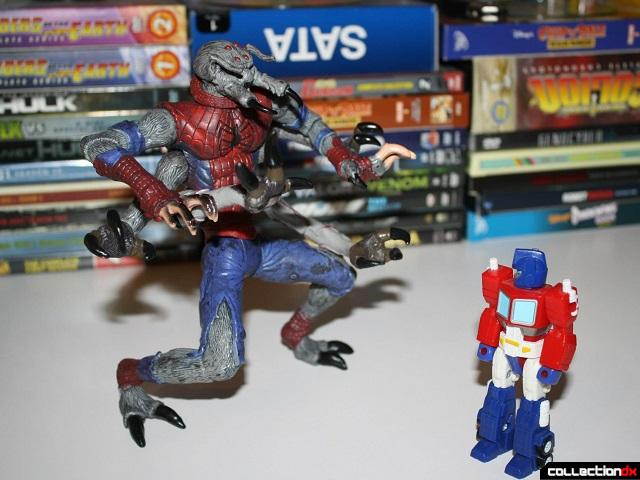 In retrospect, maybe AM Optimus doesn't have it so bad after all. If I had the editing skills, I'd do some kind of stop-motion with the audio from a certain Robocop scene that comes to mind. 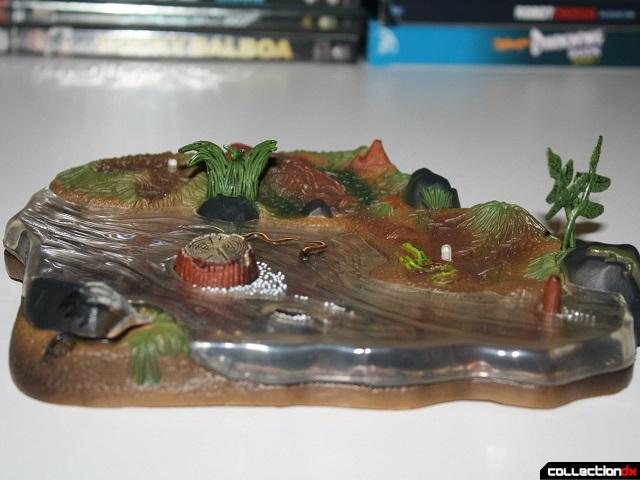 The display stand actually goes with the story line listed on the back of the package. 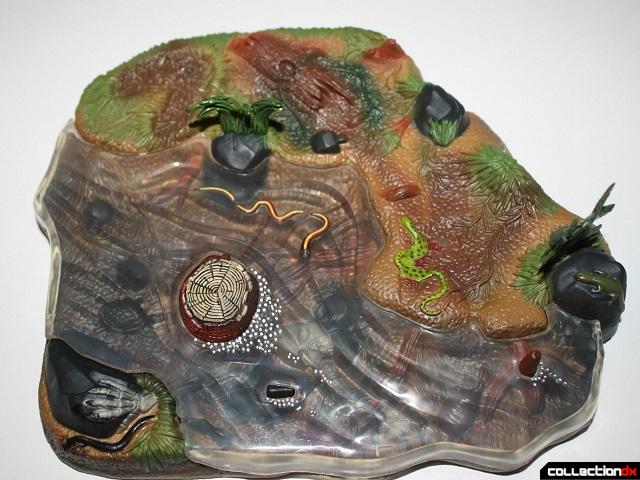 Snakes, turtles, a fish, yes, this could be the Savage Land. Or at least some place I'd expect to find Sauron. 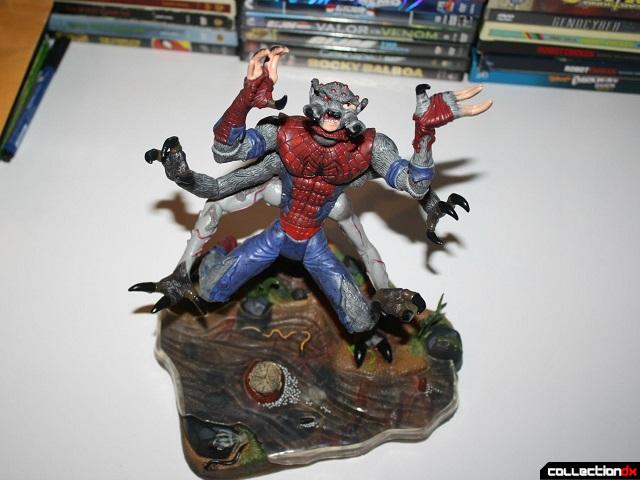 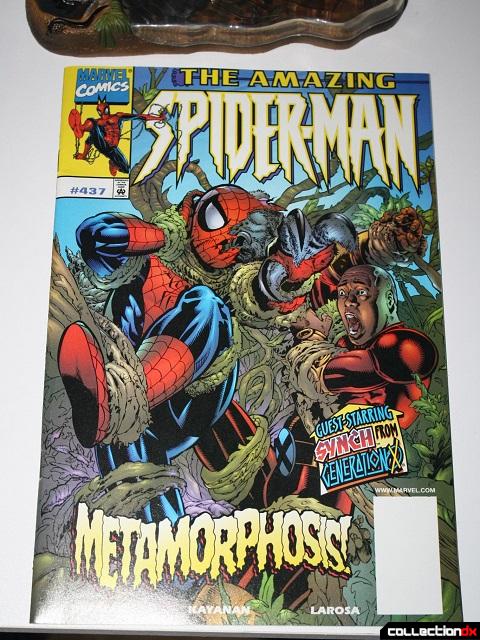 This issue released in August of 1998. Based on the date, I wasn't expecting much, because the mid-to-late 90's was a dark time for comics in general, in terms of quality. But it was actually pretty good. 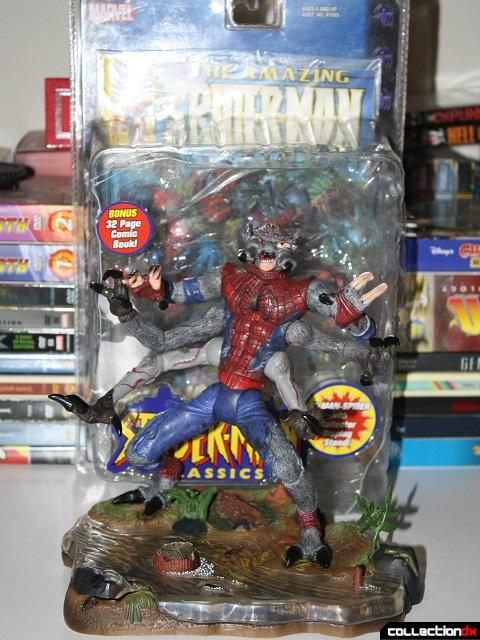 This toy isn't as great as it could have been, but for the first round, I'm satisfied. Especially since I scooped him up for only $15. And this is still the only Man-Spider released via Marvel Legends. If you have a penchant for Man-Spider or want to make your other toys look good by comparison, go for it.