Back in 2000, Takara began reissuing Generation One Transformers to celebrate the 15th anniversary of the brand. Some were available at retail stores, but most others limited convention exclusives. There were some produced that were so special, they were made in limited quantities that were heavily advertised, never to be made again. This is one of those toys, a variant of a classic. 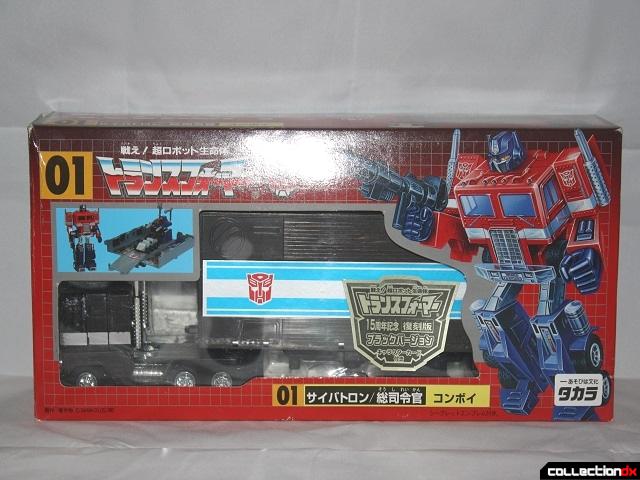 I've already done a review of Optimus Prime (AKA Convoy) in his classic red & blue color scheme here. So this will be less on the details and more the differences and novelty of this figure. This is a JAFCon 2000 exclusive, 1 of 800. I owned two at one point, and still have this one. The packaging is in the style of the classic G1 Japanese box, complete with a lack of peg flap. Back in the G1 days, Takara released all of their Transformers in boxes and never on cards. Outside of looking through the window and seeing what's inside, there're only three things that set this apart visually from the original. And these three things are important if you actually want one, because there are plenty of bootleg black Primes out there. I'll come back to them at the end of the review. 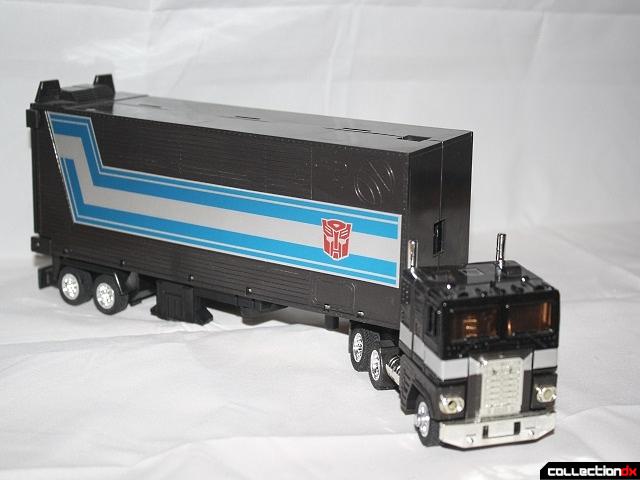 Whether it's the predominantly black color scheme or seeing a familiar face with such a different look, this alt mode is absolutely striking. I've seen a few of the old Freightliner trucks over the years, but have yet see one that was red and blue or black and I'd probably go crazy if I did. Everything about the original toy still applies here, but all the black just gives a very different vibe. It's good, but definitely different. The amber-orange tint to the windows is also pretty cool. 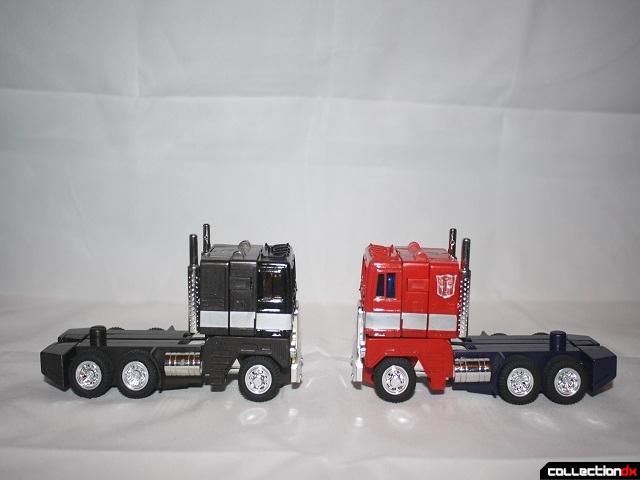 Face to face, or grill to grill rather. It's now that you can start to see the difference stickers make. JAFCon Prime comes with the same stickers, but I don't see the point in applying them. To me it ruins the aesthetic. 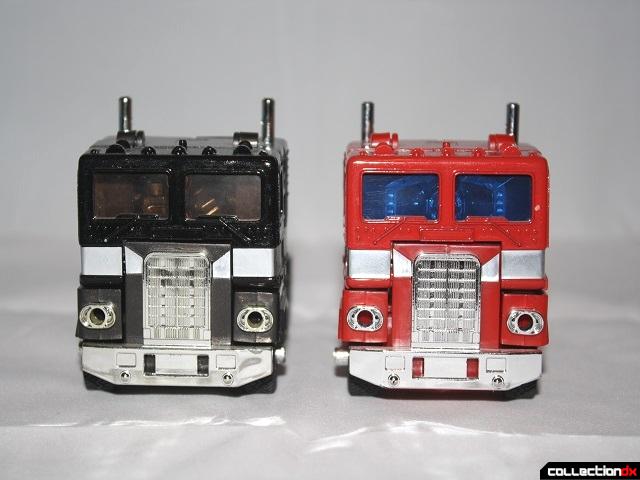 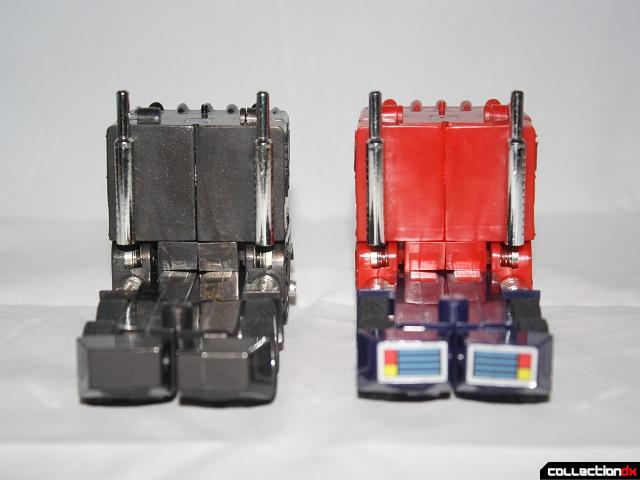 Going all black helps take away from the seams and gaps. Not that they're a big issue, but even if they were that probably won't be the reason anyone buys this. 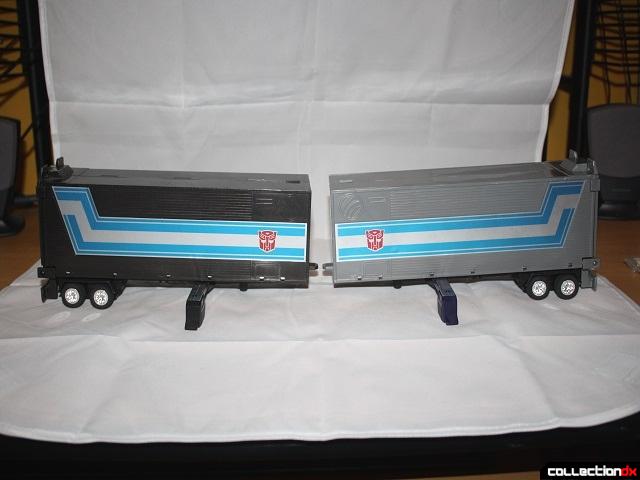 Seeing a black Combat Deck is different too, but not as much since it was that same color for the Generation 2 release, even though the sides have different stickers. 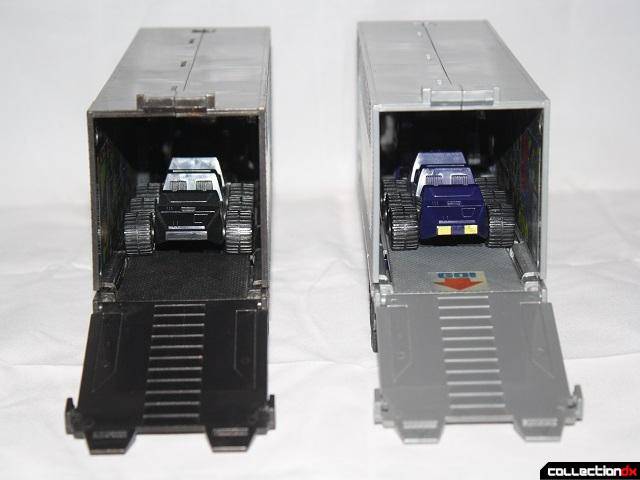 Roller also gets the treatment and it feels right. 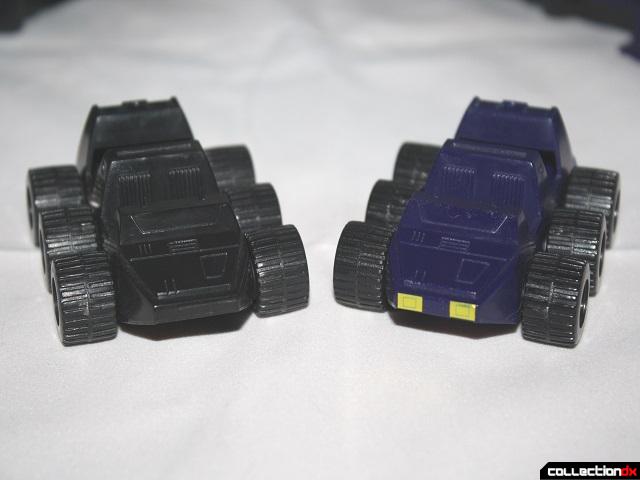 He has no headlights so you know he's dangerous. 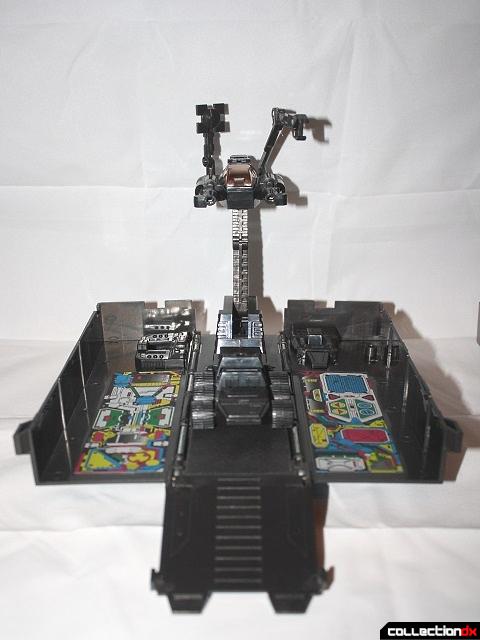 One thing that didn't change is the canopy for the command module as here in the common amber-orange tint. 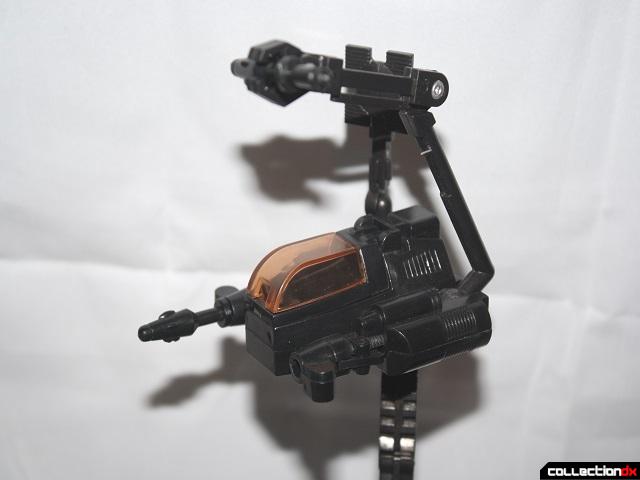 And I'm pleasantly surprised to report that the springs for the launchers are very strong with no loading problems at all. 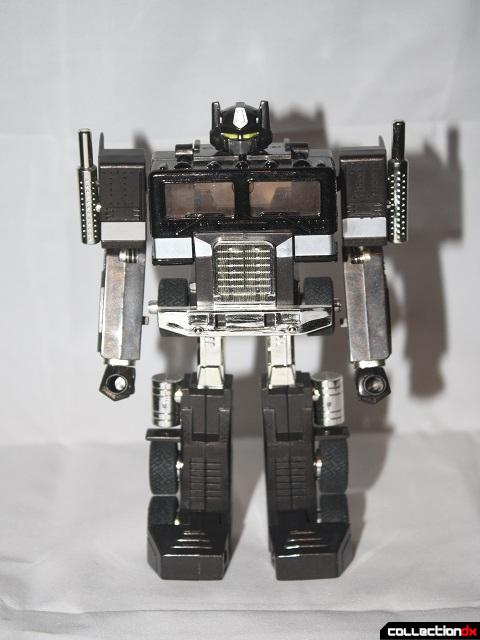 Dead robot walking. Now that his back is opened up, the windows appear to be dully tinted. Appropriate considering what this toy vaguely depicts. The same materials were used to build him, die-cast metal in the same spots, so he handles the same as classic Prime. 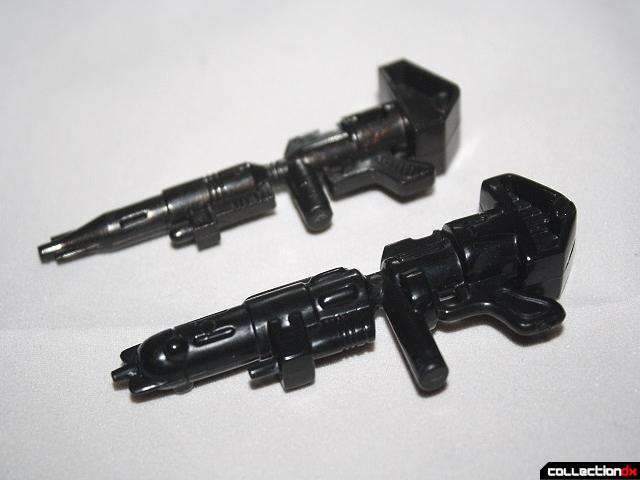 Original style laser rifle above, anime-accurate laser rifle below. Since JAFCon Prime was released in 2000, he was out two years before this update would happen. 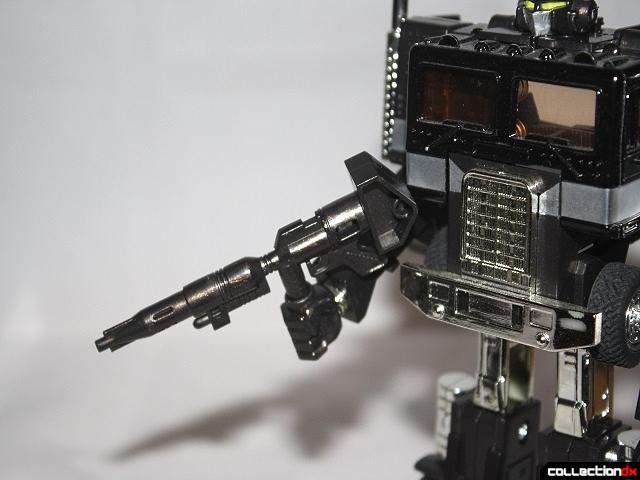 As such, he cannot hold his laser rifle straight. It's not that bad though. This is actually how some people will hold larger firearms when they're not in use, bracing against their forearm. 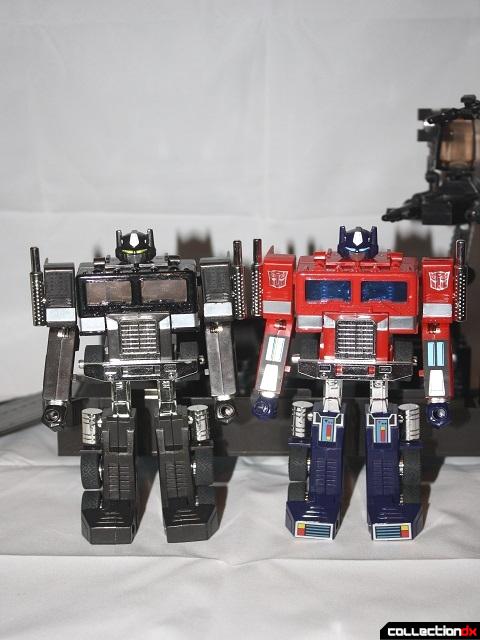 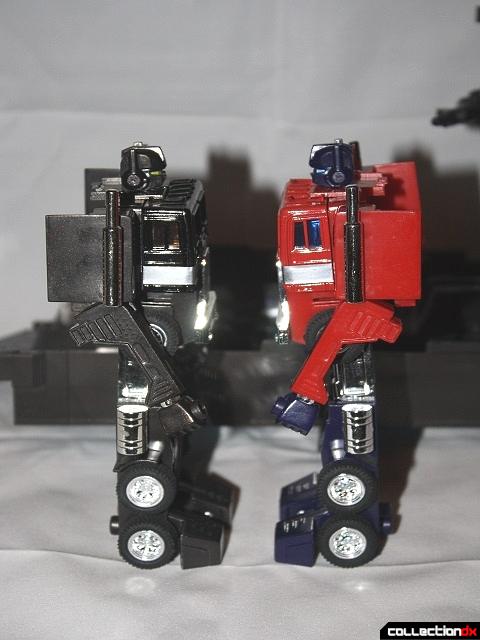 I guess that's actually a good analogy between life...and death. Because if you couldn't already tell... 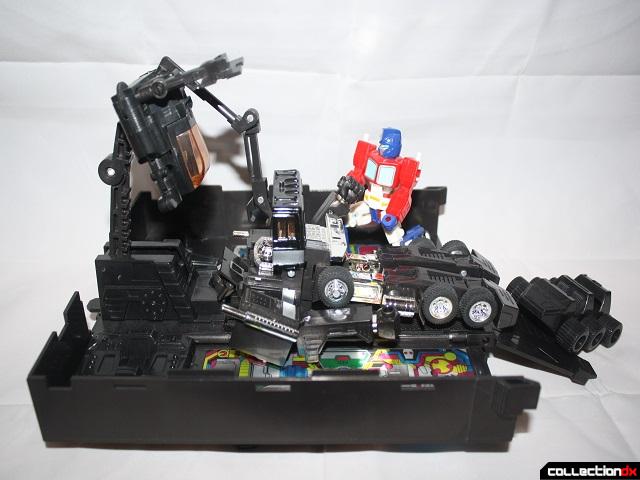 ...this is supposed to be Optimus Prime as seen in Transformers: the Movie, after he died. Or at least that's what most people speculate. I've never seen or read anything official that says so. Previously, there had been only one black Prime toy made. This was Black Lio Convoy from Beast Wars II in 1998. So there's probably no correlation there. And while it kind of makes sense, it's also a bit of a stretch because this toy has too much color. Takara would eventually do a dead Prime, and that one makes it very obvious. I think this was probably just meant to be a very cool exclusive for JAFCon, which as far as I can tell, is an event targeted at hardcore collectors and hobbyists. 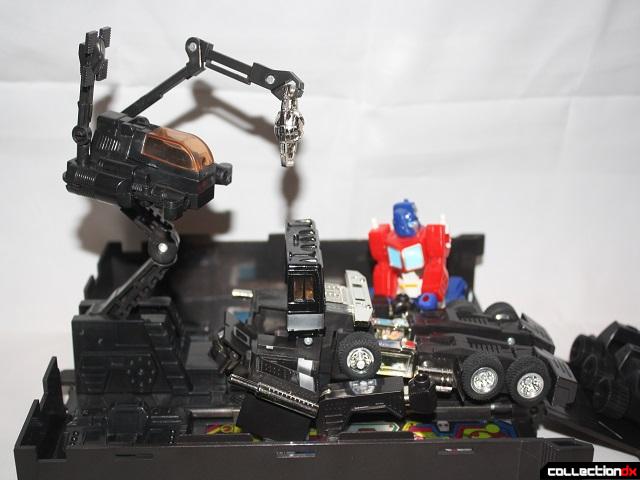 Although, and I'm not making this up, when I took everything out of the box the first time, the rubber hose for Roller's fuel pump crumbled into dust as soon as I touched it. True story.

So can I recommend this toy?

The pros are all the same as in the review I did for classic Prime. He's frankly a good and fun toy, not too simple or complex, not too big or small, just right. On top of all that, this JAFCon exclusive has the different black paint scheme so it's definitely not common.

But this time, the cons take precedent. Again, this simply isn't THE best Optimus Prime toy in my opinion, be it red and blue or black. To me, that's Masterpiece MP-04 (official and definitely dead as MP-04S) and ToyWorld's Orion (unofficial and probably evil in a more recent release). MP-04S was also made in a limited quantity, but nowhere near as limited as JAFCon Prime. We're talking 800 versus 4,020. So yeah, this one's only for the completests, big Prime fans, and lovers of exclusives and variants.

That being said, if one is determined to own this toy and they want the real deal don't get suckered into paying big money for a KO. There are three things to look for when buying a JAFCON Convoy. First, look for the Japanese-style box which has Japanese text and no flap, and is basically a rectangle. Every KO Prime I've ever seen, red and blue or black comes in the big Hasbro-style box with a flap. Second, look for the gold and black sticker in the shape of the Autobot symbol on the window. I think this is a 15th-anniversary notice, which means it was made in 2000. You can see both of these things in the first picture up above and in the gallery. 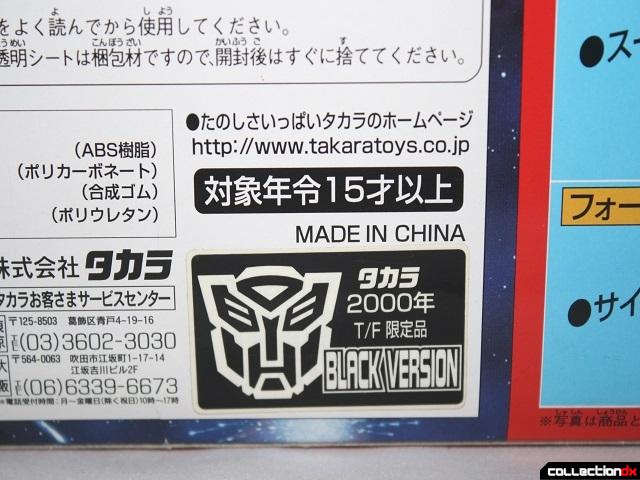 And third, check the back of the box for this notice, which also indicates this was made in 2000 and is a black variant. 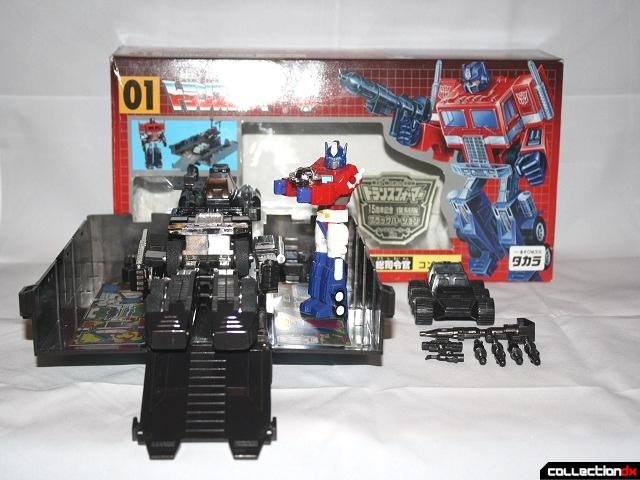 Another thing is, the bloated version of the rifle is a variant that dates back to the Diaclone days and both the bloated and the regular versions have had post-lengthening updates (instead of, you know, replacing the decorative trigger with a post).