I mentioned before that I was once a huge fan of James O'Barr's Crow comic book and the resulting movie. Years have passed since that first film and I've found other efforts to revive The Crow lacking. As a result, I moved on, and while The Crow was very important to me at one time, now it's almost nostalgic.

I don't know what came over me this year, but with the release of the Crow ReAction figure and the Hot Toys release, I now find myself with three different Crow toys in my collection.

This toy comes from the McFarlane Toys Movie Maniacs line which consists of horror movie icons. While McFarlane Toys have come a long way since their inception in terms of articulation and detail, this happens to be another statue masquerading as an action figure. It's not without its merits though.

This is the Deluxe version of the figure. The regular version comes simply on a blister card. The deluxe version comes packaged in a very nice display case that also houses a diorama. To be honest, you will get as much enjoyment out of this figure by just leaving it in the package. 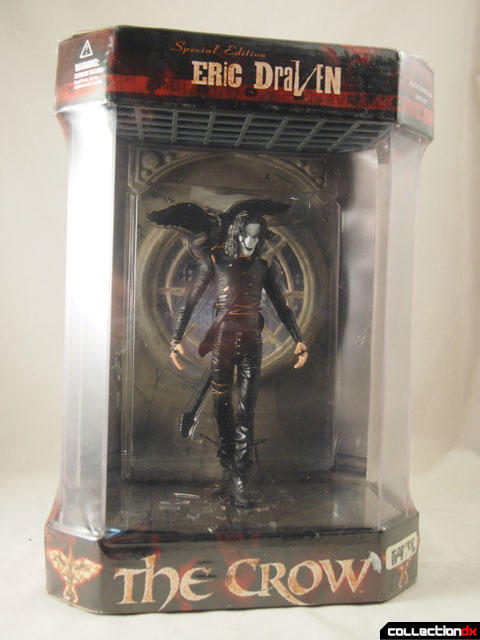 The package consists of a clear plastic box with cardboard top and bottom, then entirely shrink wrapped. 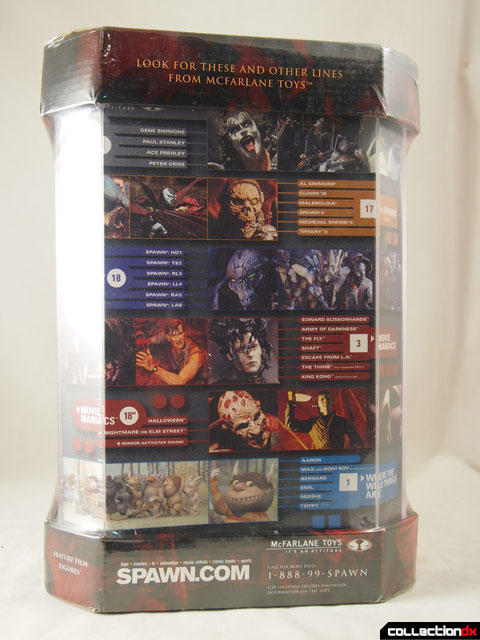 Once opened, the exterior cardboard gets trashed and it reveals a nice lid and base beneath. 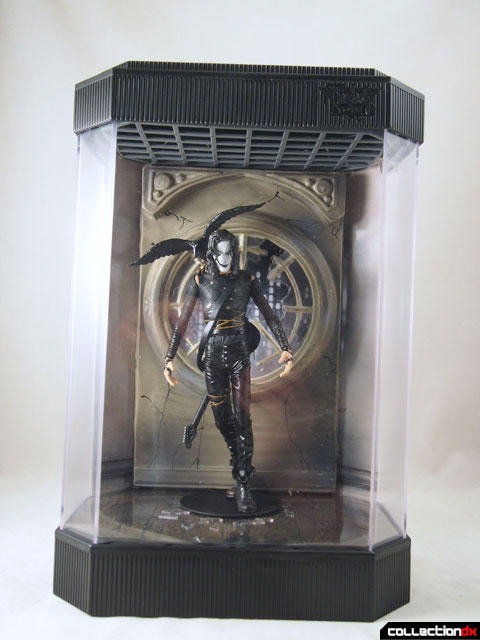 Underneath the lid is a grey plastic top. The back has tabs that you can use to hang the display on the wall. 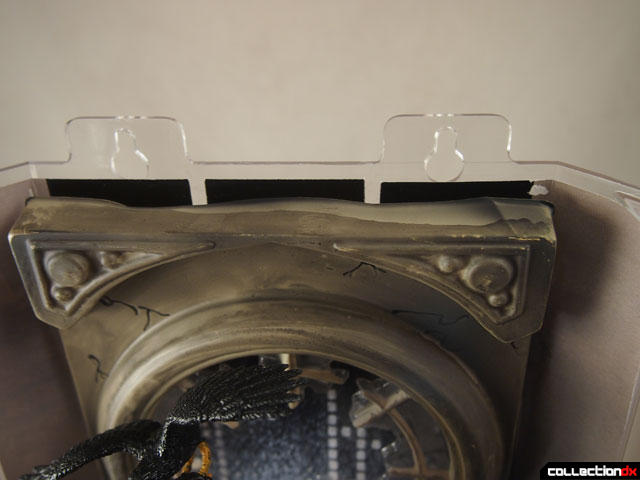 Ignoring the figure for a moment, the backdrop is a vacu-formed piece of plastic to represent the broken window in The Crow's lair. Behind that, a print with the view of the city. 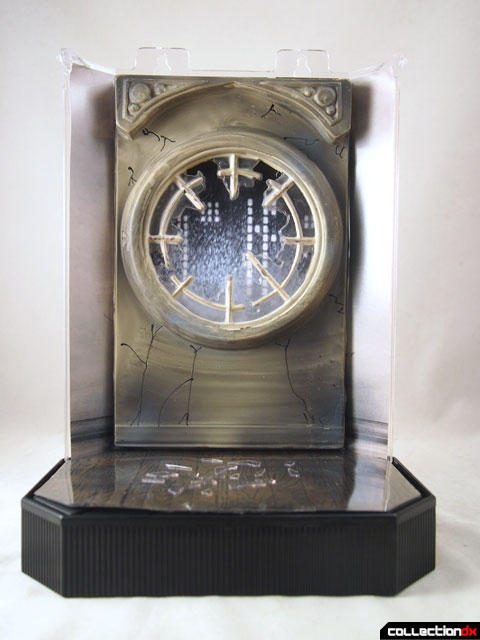 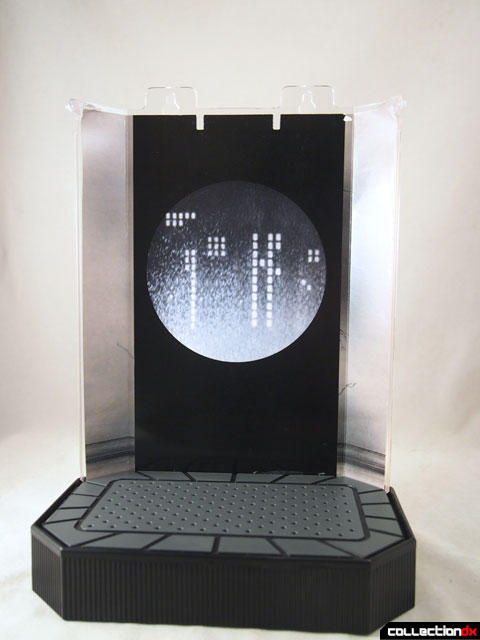 The clear bottom of the background has molded in shards of glass, a nice touch. 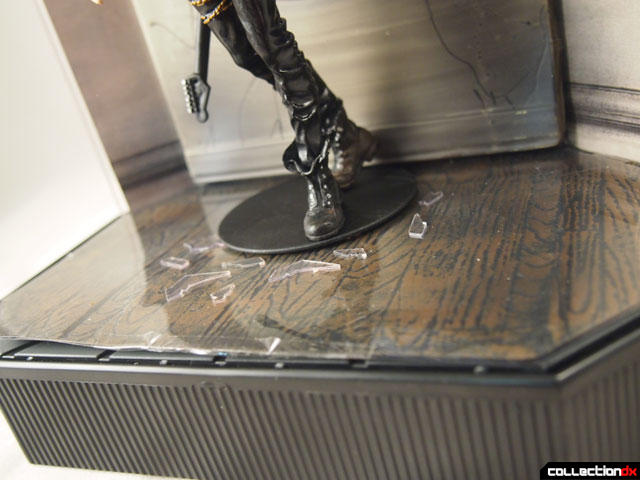 In the package, the Crow is secured to a clear plastic tray that needs to be removed and discarded. 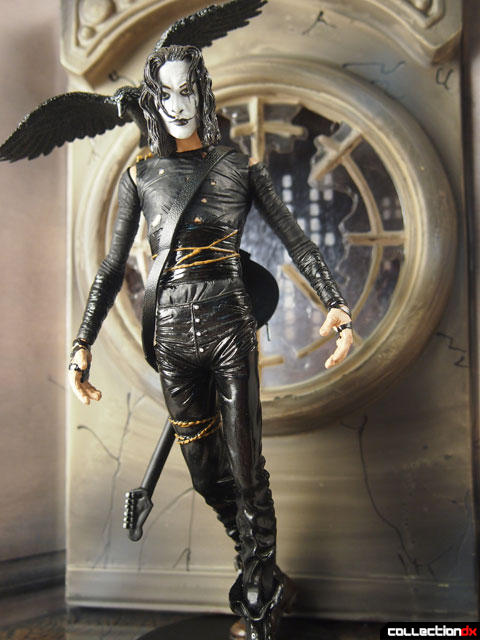 Eric Draven is a decent looking figure, it's just not an ACTION figure. It's essentially a statue with some swivel joints added to it. 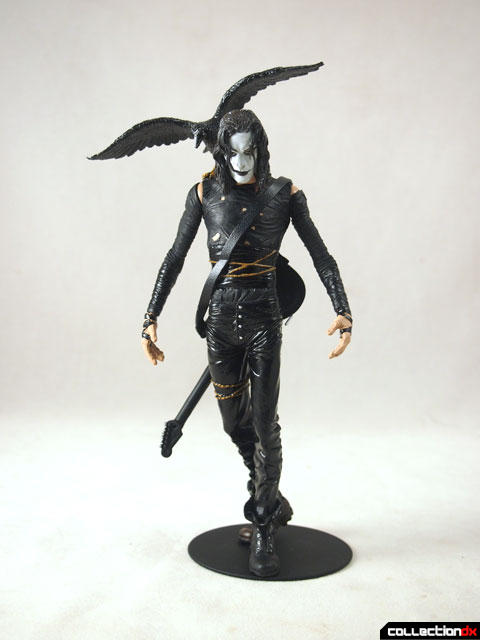 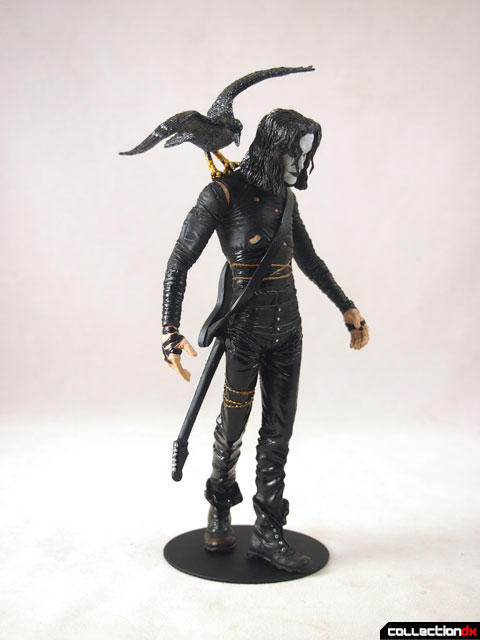 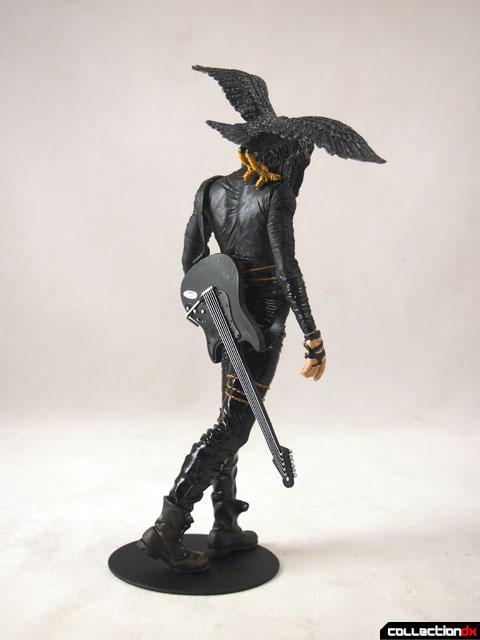 The crow attaches to the shoulder via 2 pegs in the crow's feet, and the guitar hangs free over the shoulder. 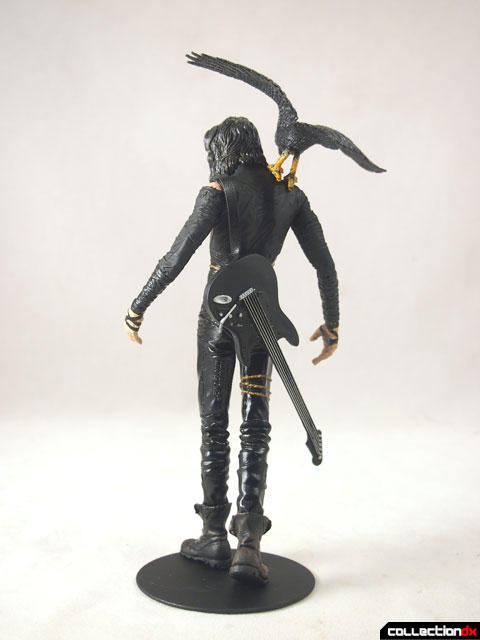 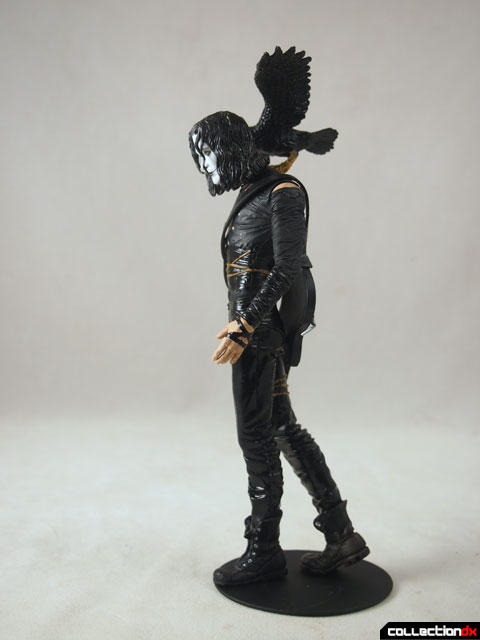 The face sculpt is very nice, if not a little cartoonish. The head was sculpted by Chris Dahlberg, one of the founding members of the Four Horsemen. I'm not sure who did the body but it's nicely done as well. 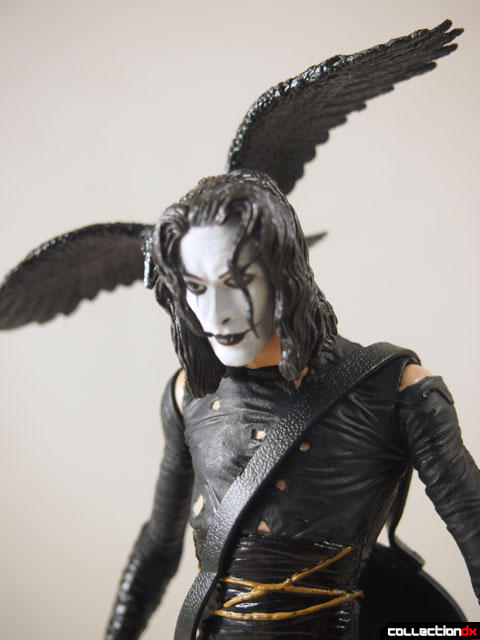 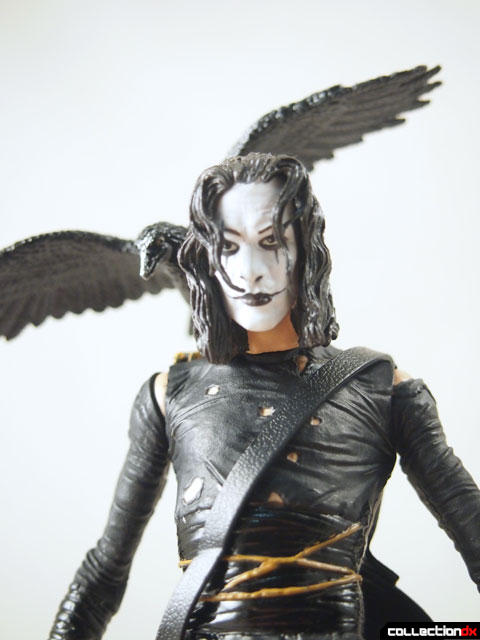 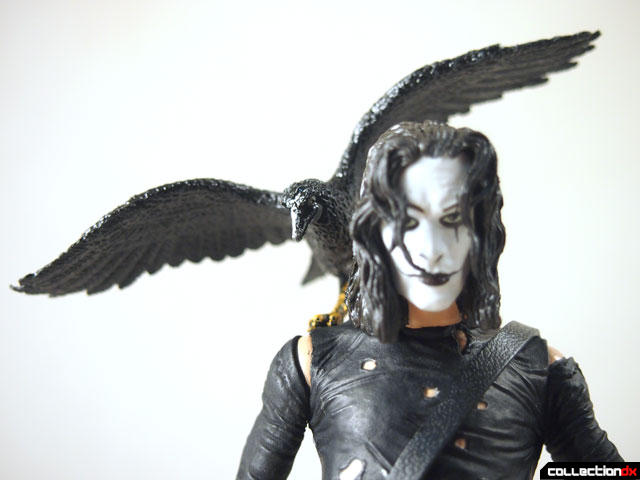 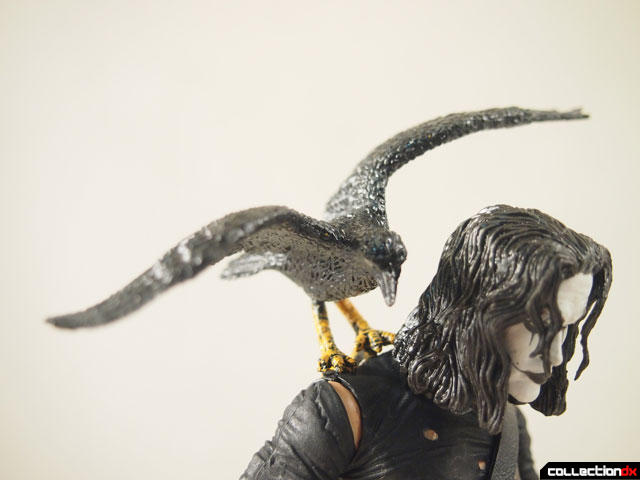 The articulation, for what its worth, is minimal. Swivel joints in the hips, shoulders, wrists and neck. Basically a cut-up statue. It only looks good in one pose, so why bother with any joints at all? 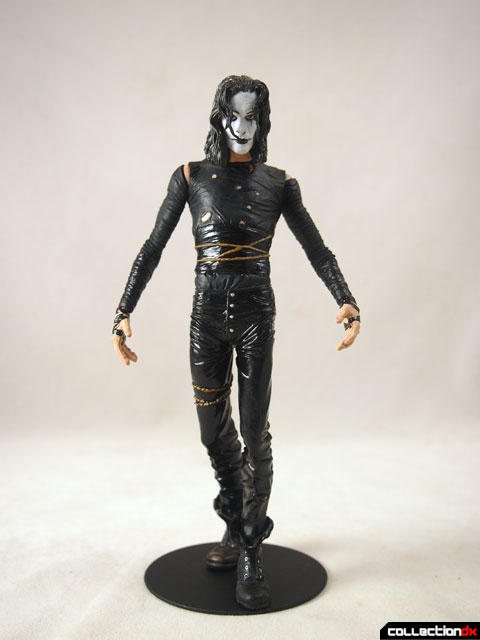 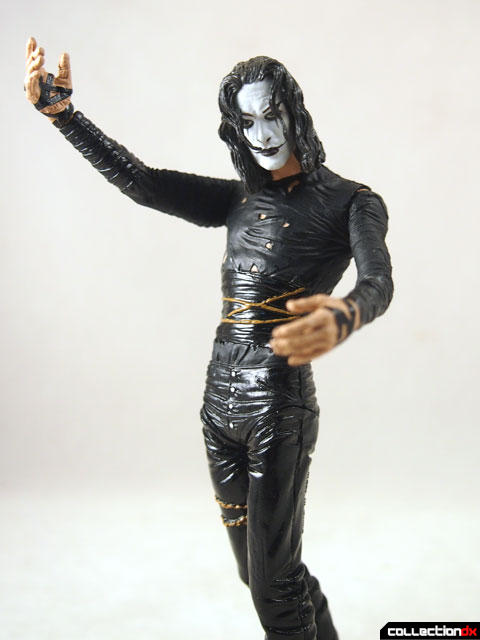 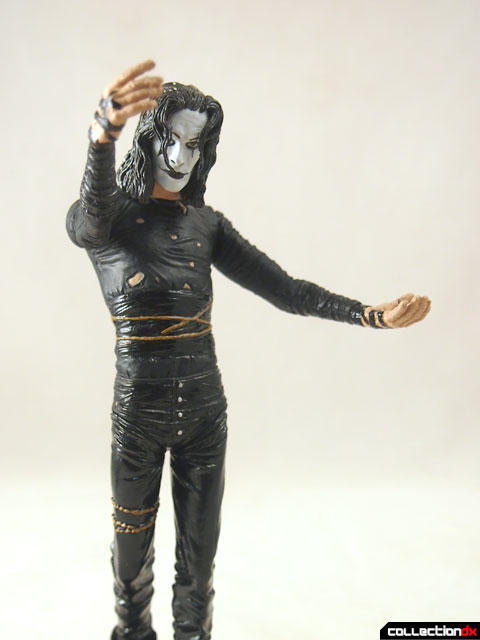 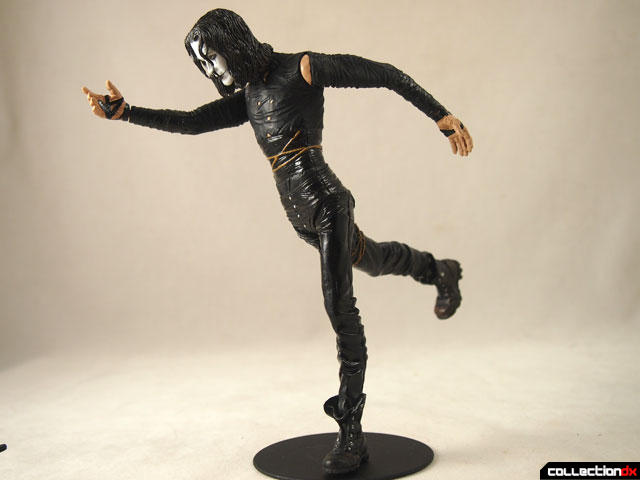 To be honest with you, I never would have picked this up had I not found it at a garage sale for a few dollars. I doubt I would have even opened it had I not ordered the Hot Toys Crow figure which I'll review next. It will look good hanging on your wall, but that's about it. At the very least, the display case is nice and can be used with other figures in your collection.