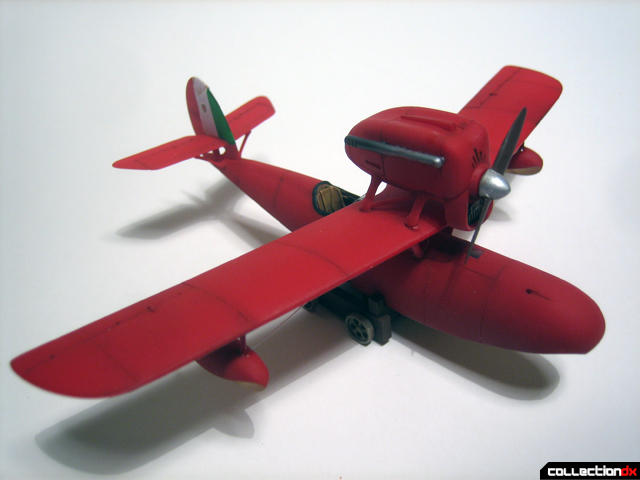 Japan-based Fine Molds is currently one of the world’s premier model kit manufactures. After acquiring the licenses for Star Wars plastic model kits and then manufacturing studio accurate kits has resulted in Fine Molds as one of the leading model companies in the eyes of the international model community. 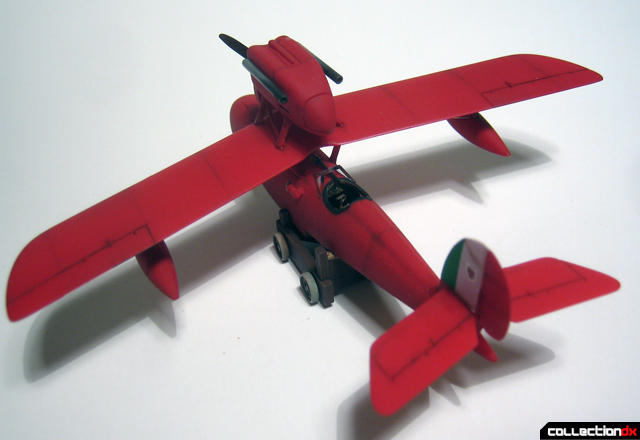 Although their kits are usually more expensive than other maker’s kits in the same scale, they are also some of the finest scale representations of the subject available. Another license Fine Molds has owned over the years is the rights to produce scale models of the aircraft from Hayao Miyazaki’s 1992 feature length film Porco Rosso. 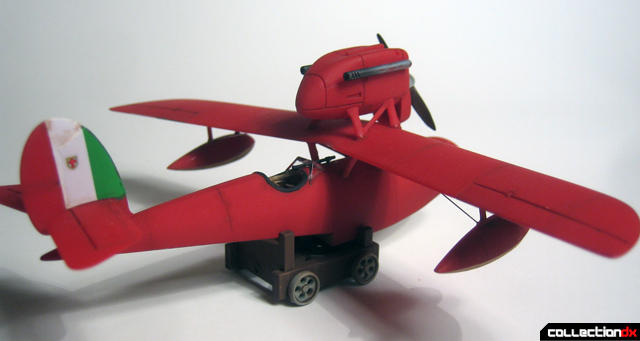 Next to Kiki’s Delivery Service, Porco Rosso is one of my favorite Miyazaki films. Porco Rosso is the story of Macro Pagot a former seaplane pilot who flew for the Italian Navy in the Great War. Fifteen years later Marco is a pilot for hire in Adriatic Sea flying against seaplane pirates who terrorize the local citizens. Living on a deserted isle he only thinks of one person, himself and evolves into a pig, a visual metaphor for “All men are pigs”. Marco is known as Porco Rosso, the Crimson Pig, partly due to his trademark aircraft a heavily modified Savoia S.21 he calls “Folgore” that is painted bright red. 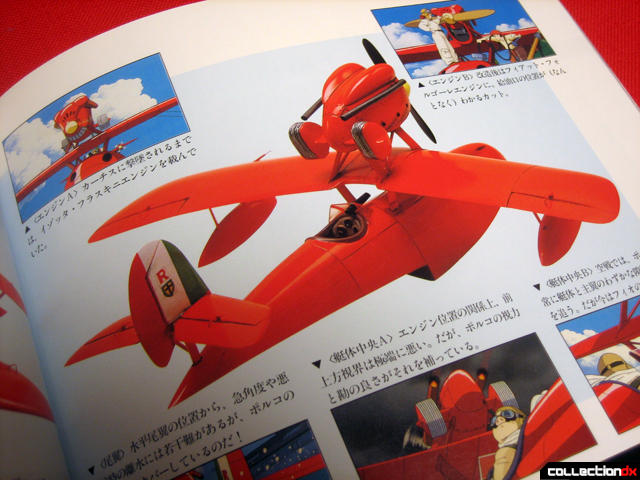 Later, Curtis, an upstart American pilot, is hired by the pirates to shoot Porco down. Porco is brought down and due to circumstance, Porco is forced to have his plane rebuild in Italy by a young Italian-American teenager named Fio Piccolo. Porco’s uneasy friendship with Fio forces himself to deal with his many losses of the past including the greatest loss of all, himself. 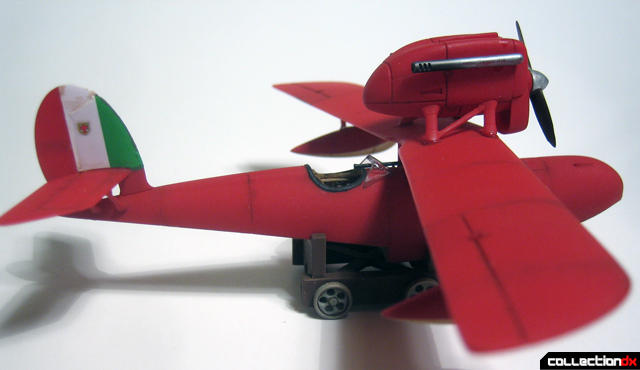 Porco Rosso originated from a Hayao Miyazaki manga serialized for the monthly modeling magazine Model Graphix and was originally titled “The Age of the Flying Boat”. This story along with other Model Graphix “pig” stories were later collected into a compilation book called “Daydream Notes”. These manga stories we part fantasy but the details were based on real aircraft, ships and tanks and had a deep historical background associated with them that were well liked by modelers. 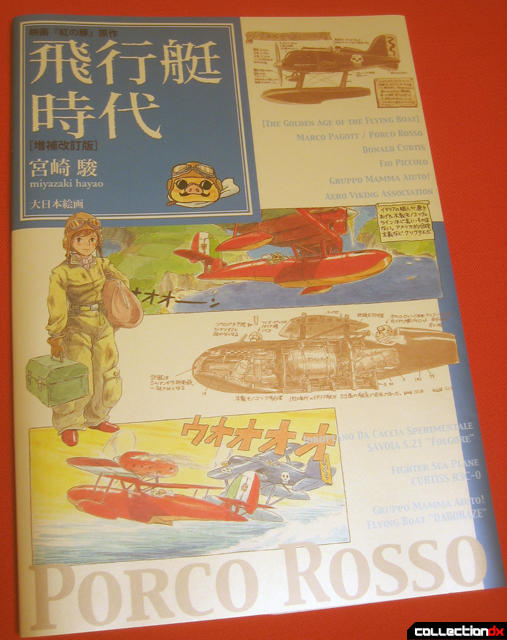 Fine Molds released two of the most iconic aircraft from Porco Rosso in two different scales, 1/72 and 1/48. This review represents a special package that includes Porco’s Savoia S.21 in 1/72 scale that has the option to build both the Early type and the Late Fio Type but also the book “The Age of The Flying Boat.” The book not only reprints the entire Hayao Miyazaki “The Age of the Flying Boat” manga but also has loads of info on the history of the real Savoia S.21, technical drawings, model tips, how the Porco Rosso models were manufactured, stills from the film, diorama ideas, pictures of a working scale model of the S.21 and more. Although the book is in Japanese it is a must own if you a fan of Porco Rosso and Hayao Miyazaki. This all comes packaged in a plain gatefold box with some basic information on the contents of the box and the Studio Ghibli approval stamp. 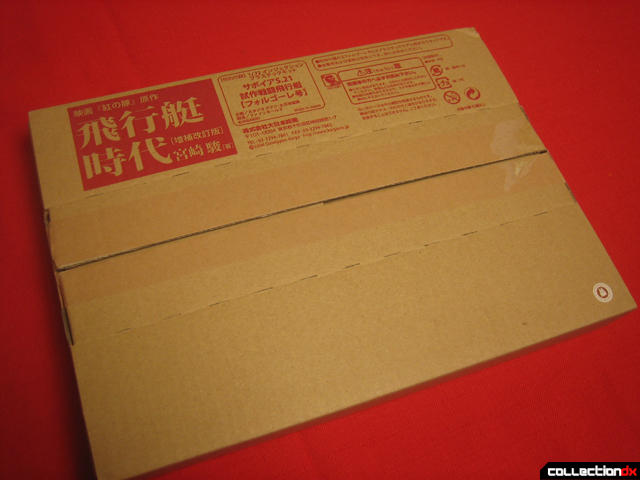 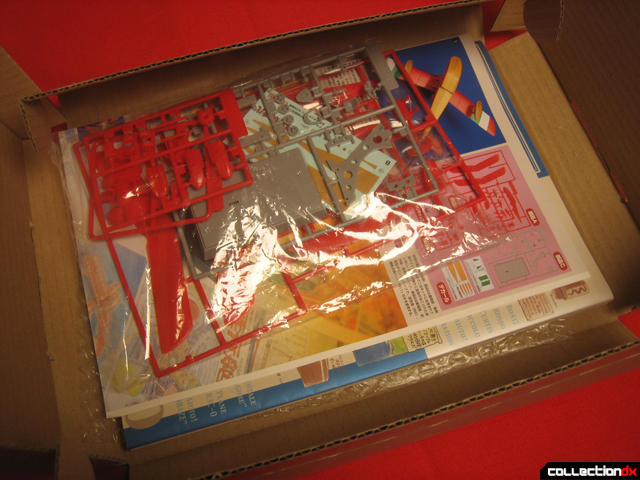 One item to note is about the history of the Porco’s S.21 itself. The Porco’s aircraft is in fact based on two aircraft, the Savoia S.21 and the Macchi M.33. Apparently, Miyazaki remembered the look of an aircraft he liked from years ago but could not remember its name and largely drew Porco’s aircraft from memory. Later he realized that the aircraft he remembered was actually the Macchi M.33, not the Savoia S.21. Regardless if the story is true or not, Porco’s S.21 is a combination of both aircraft with Miyazaki’s touch thrown in for good measure. 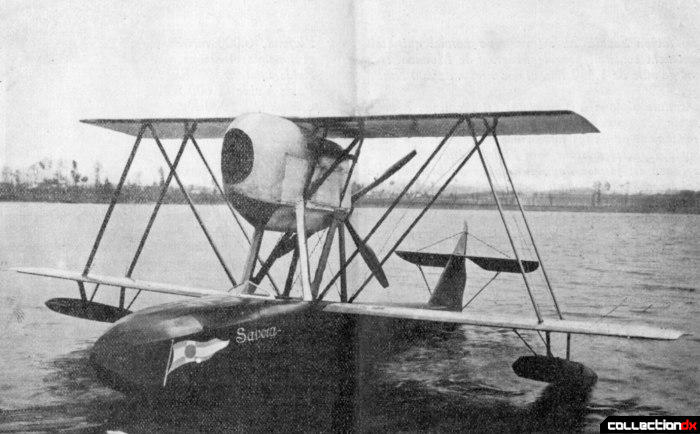 The Age of the Flying Boat/ Savoia S.21 Early/Late Fio Type includes: 2X red sprue, 1X grey sprue, 1x Clear sprue, 1x poly cap sprue, 1x instructions, 2x decals, 1x Age of the Flying Boat book. All the panel lines of this kit are recessed. The kit comes with the option to build either the Early S.21 from the first half of the film or the Late Fio Type rebuild version as seen in later half of the film. The kit also comes with two types of stands, a beaching gear kit or the standard in flight stand. The modeler is not committed to the stand as the S.21 easily comes off either stand for display. It also comes with a seated Porco figure to put in the seat of the aircraft, although I did not use this option. 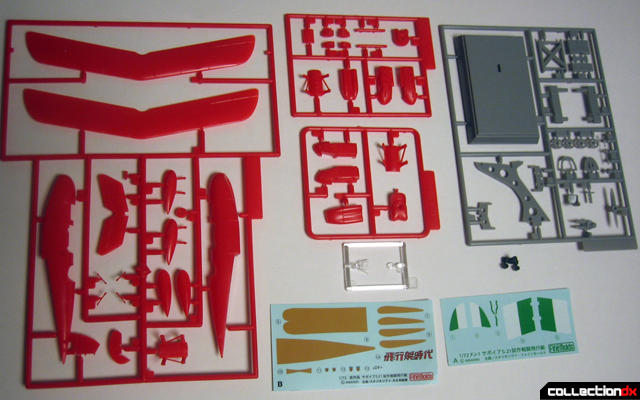 The cockpit goes together well, it is small but the details are sharp and detailed. You can use either a decal or a raised detailed part to represent the control panel. One huge let down is the fact the kit comes with a decal for the seatbelts. I purchased Eduards photoetched 1/72 scale WWI French Seatbelts set which did the trick. Why Fine Molds did not include the seatbelts as photoetched parts is beyond me as it would not raise the price of the kit by very much and the detail is so much better than a decal. 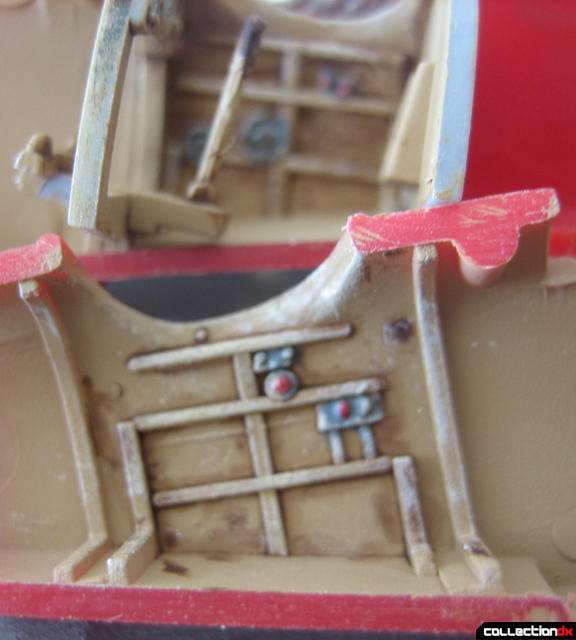 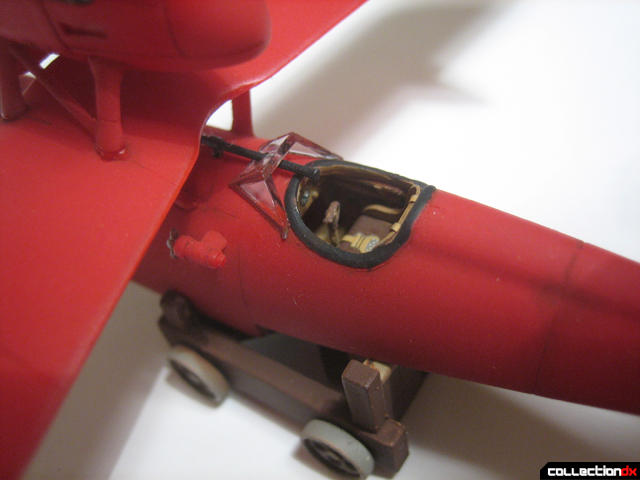 Originally Fine Molds released the Late S.21 and the Early S.21 as two separate kits in 1/72 scale. When putting this Flying Boat package together they simply put the two sprues for both engines into one box with the sprue for the fuselage. The gain of the book includes some losses. The losses include a small bonus figure but most importantly some modeling issues if you are to build the Late Fio type version. 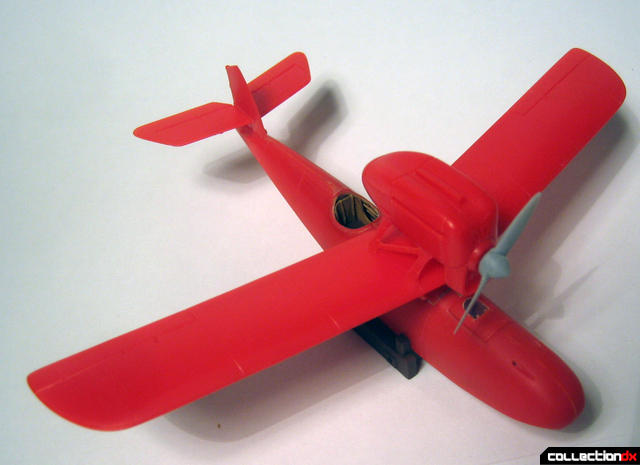 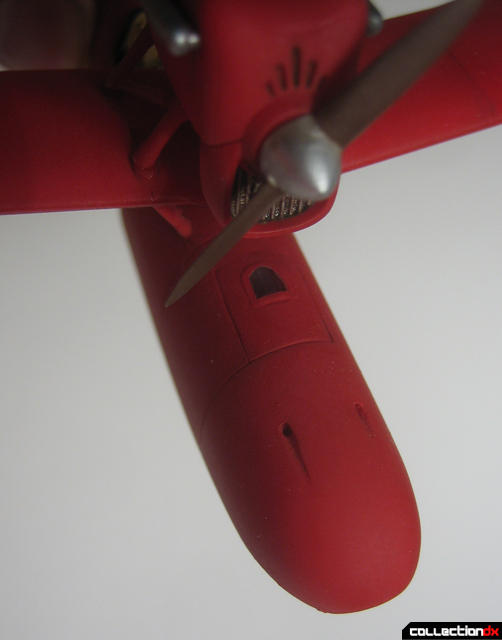 For example, Fio’s window on the nose of the aircraft is included but the nose hatch door that one attaches the clear window part to does not have a hole for the part. I actually had to drill out a hole and make the part fit with an X-Acto blade and polish out the window with plastic polishing compound. Fine Molds should know better than this and this was not a fun moment when I was building the kit. The hole should have been molded in the part or at least the entire nose hatch door part should have been molded in clear. 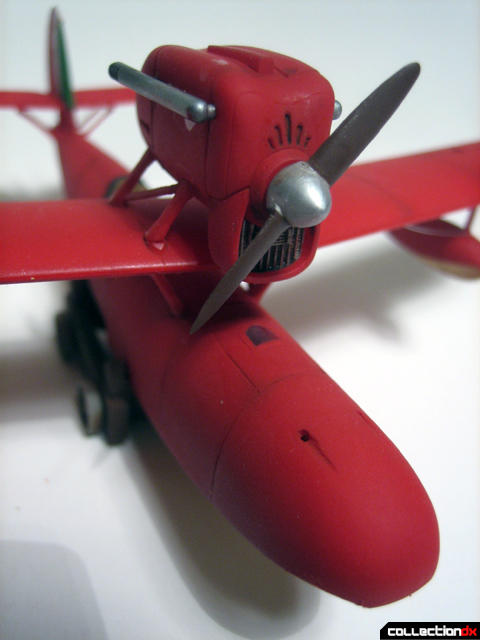 Because the propeller is smartly attached with a polycap, both engines can be built up using the same propeller. Unfortunately, only one part is included to hold the polycap in the engine. One can easily be scratched build but here is another opportunity that Fine Molds missed to give the option for the modeler to build up both engines as opposed to having the modeler commit to one engine. 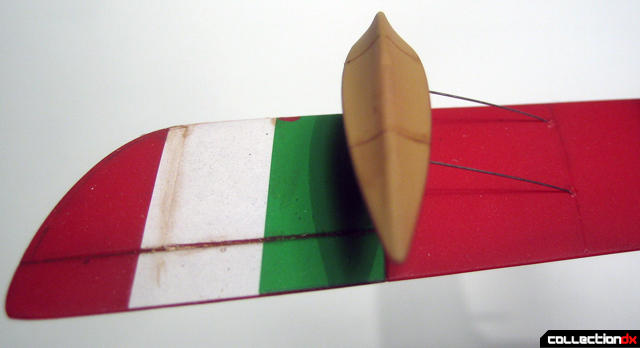 The scaling is beautiful with lots of finely detailed lines and shapes that leaves the impression that the aircraft is fast and in flight even though it's just sitting on your shelf. The only problem is the windscreen is too thick and out of scale, perhaps a new vacuform window should be made that could bring it to scale to the rest of the aircraft. Although the instructions do not suggest it there is rigging for the outboard floaters that need to be made by the modeler. This is easily done with stretched sprue or a guitar string. The holes should be drilled in an angle towards the floaters, something I forgot about when I build my kit.

One of the best features of the kit is that the seam lines are on panel lines. It gets a bit difficult in fitting the wing structure to the fuselage, but all in all the seams are great especially with the engine assembly. There is only one small seam that needs to be sanded with the Late Fio style engine and, after the weathering is applied, it looks beautiful. Extra care is needed in putting the tail rudder on, as it can be easily misaligned. 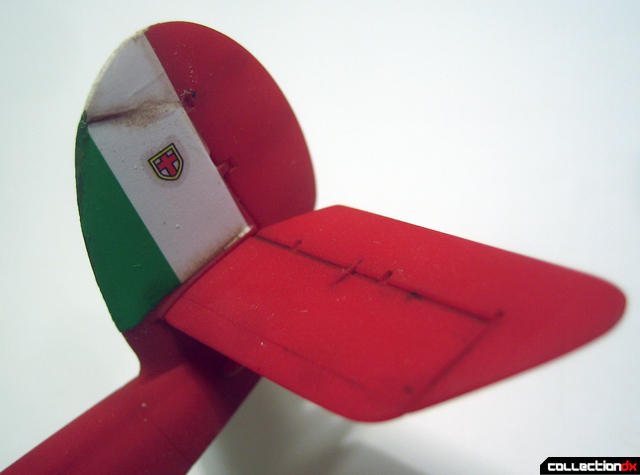 The major pieces need to be painted and decals applied before final assembly. Although Folgore is glossy red, I decided to paint the aircraft in Tamiya flat red which came out very nice. 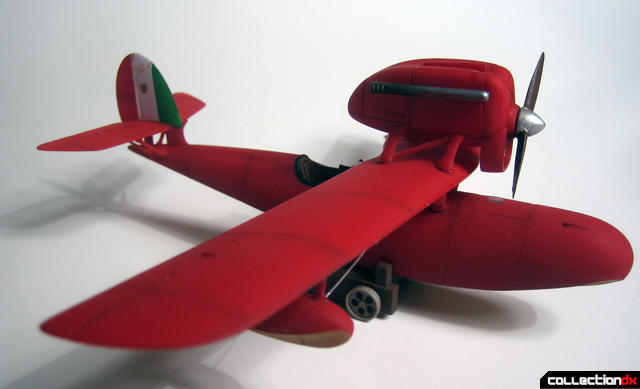 I was not too happy with the decals. Like Bandai, Fine Molds make their kits easy enough for first-time modelers but with enough detail to satisfy experienced modelers. This includes decals for the tan dope color at the bottom of the aircraft and Italian wing stripes so the modeler does not have to paint those details. I opted to paint the bottom with Tamiya paints but used the wing stripes. What was upsetting was the low quality of the decals. They were very thick and could not be fazed to set in the panel lines with either Mirco-Set or Mirco-Sol decal setting. The decals were very brittle as well and one decal refused to come off the backing paper.

The final assembly of the aircraft was great and after it was weathered with oil paint, the kit looks fantastic. The final fit was perfect and overall Fine Molds captured the delicate lines of Porco’s S.21 beautifully. The kit is small only measuring about 5.5 square inches but the details are crisp and the cockpit and engine are wonderfully detailed. 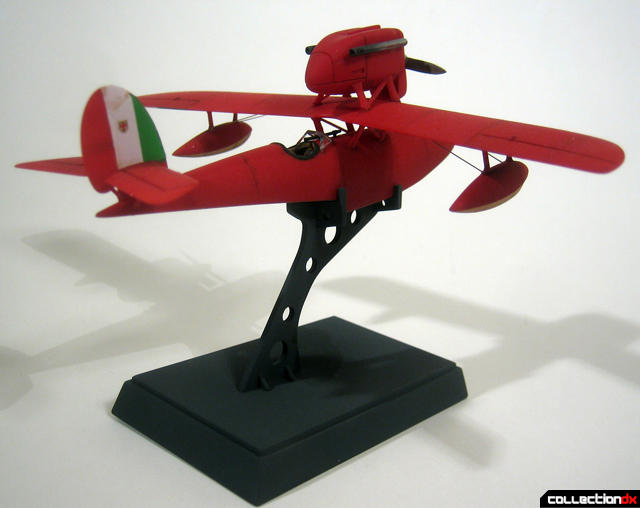 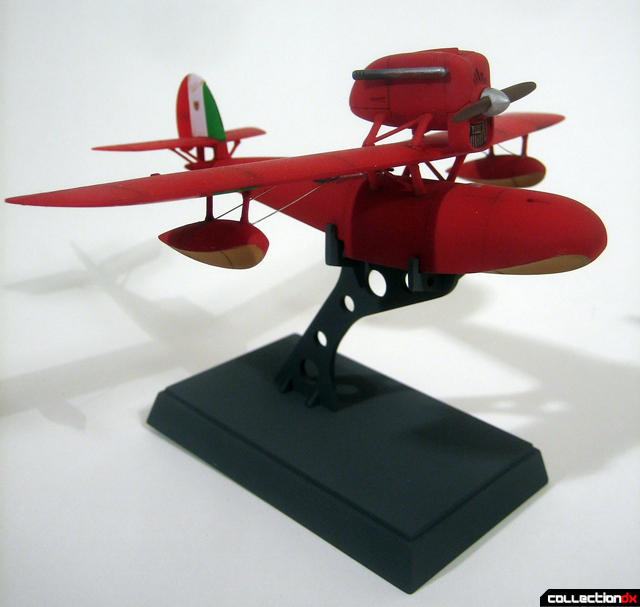 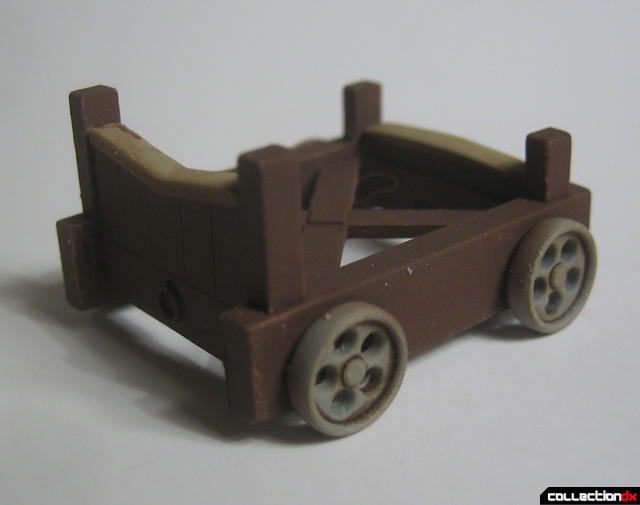 I judged Fine Molds a bit harsher than usual because of their current status at the moment with modelers and the premium cost of their kits. The issues I brought up are relevant but this kit is about 10 years old now generally it is still a smart model kit to build. Most of the issues are based on forcing two options into one box that leaves the Early Type of the S.21 being able to be build out of the box but the Late Fio type having to scratch build parts. But it does include a fantastic book that is worth more than the set by itself and I believe that it is a good trade off. If Fine Molds could include a properly scaled window, photoetched seatbelts and a better decal sheet you would have a nearly perfect model kit. 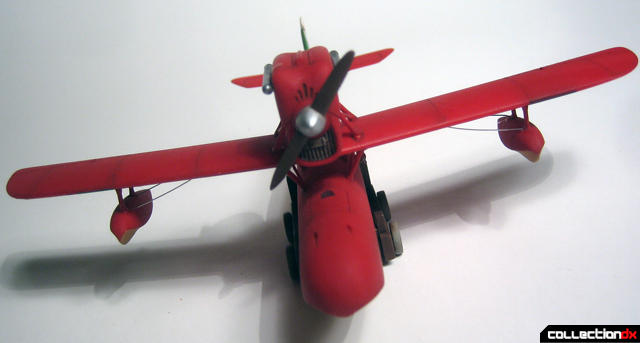 Fine Molds’ Savoia S.21 is one of the best looking finished models I own as it looks the way its suppose to. I am looking forward to building more Fine Mold kits from the Porco Rosso line as well as their Star Wars models and their Japanese Pearl Harbor Midget Submarine in 1/72. Tie-Interceptor here I come!

The only thing I don't like, in the pictures, is the windscreen. In scale that looks like it would be about five inches thick! I understand that this is a result of the manufacturing process, but I'd think that a "special edition" kit like this could at least include a sheet of clear plastic and some cut-out templates.

On the whole when it's finished I think the single weakest part is that windshield, it's just way to thick and it's always the first item people point out when I show them the model. Simple Fine Molds can do way much better than that but for whaterver reason choosed not to.

Thanks for reading the article!

I believe Fine Molds just released a pre-built and painted Savioa S.21. I think Habby link Japan has them for sale, although it would be cool to get a nice metal Savoia s.21.