When Bandai reissued the former Imai Macross kits under the 15th Anniversary banner in the 1990’s, Bandai reissued six model kits with chrome special coating along with the regular issue kits. The kits that Bandai released with special coating were: 1/100 VF-1S Strike Battroid, 1/100 VF-19 Fire Valkyrie, 1/144 Valkyrie VF-1J 4 Type Set, 1/72 VF-1S Super Valkyrie Fighter and 1/8000 SDF1 Macross. This was not the first time Macross kits have been released with Chrome coated sprue, with both Imai and Arii having released chrome coating kit series in 1983. 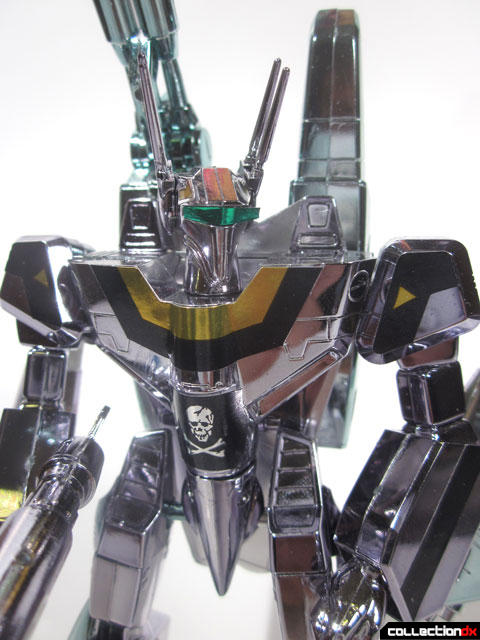 Although Bandai’s release of the coating types kits were limited editions, they are still very plentiful on the second hand market and can usually be picked up inexpensively. I knew that these existed but I never was too motivated to pick them up until I went to Macrosscon 2010. After seeing nearly Macross kit ever made, I shortly thereafter got the bug to collect every Macross Bandai kit ever produced. 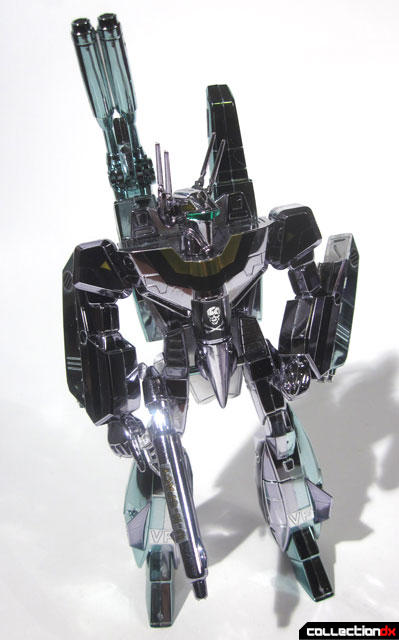 A second reason why I picked this 1/100 VF-1S Strike Battroid up was when I had a chance to open up the box I saw that they were produced in two colors of chrome, silver chrome for the body and green tint chrome for the armored parts. I thought that was quite cool, considering that it could have easily been a boring monochromic silver chrome. 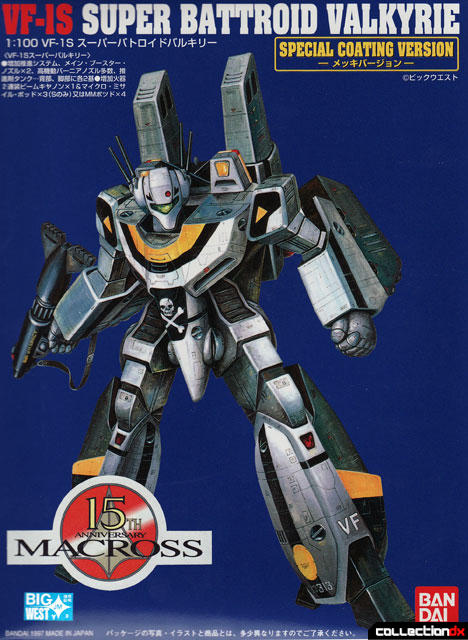 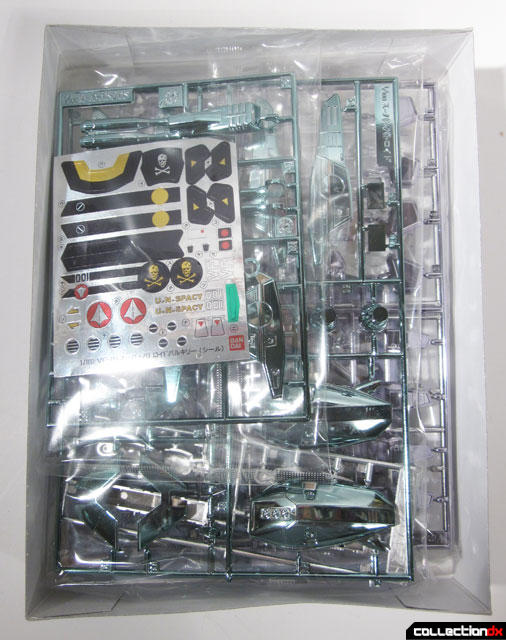 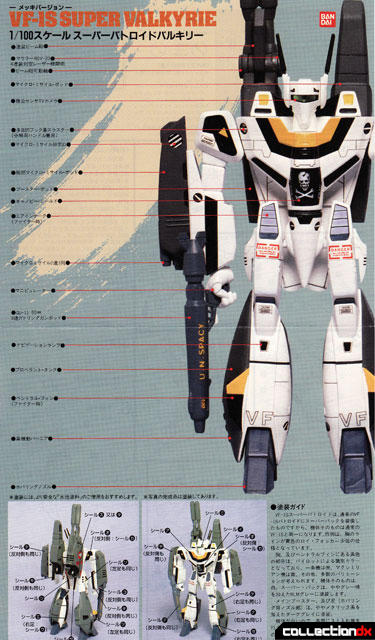 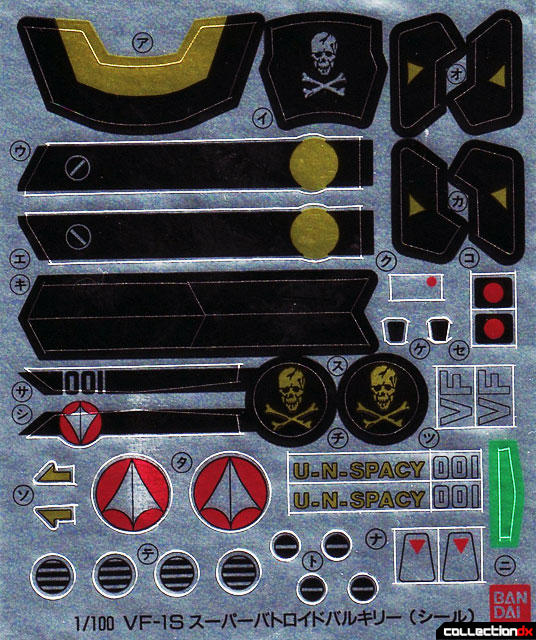 Imai originally released this Bandai kit un-chromed in 1983-84. Bandai also released this kit as a normal version, which is still available. I plan to build the regular kit as part of my 1/100 Valkyrie build off series and I will be discussing the build issues in the standard kit review. But because of the kit being produced in chrome, keep in mind the seams cannot be filled and remember to scrape off the chrome edges to be glued with a X-acto blade so the parts can stick together. 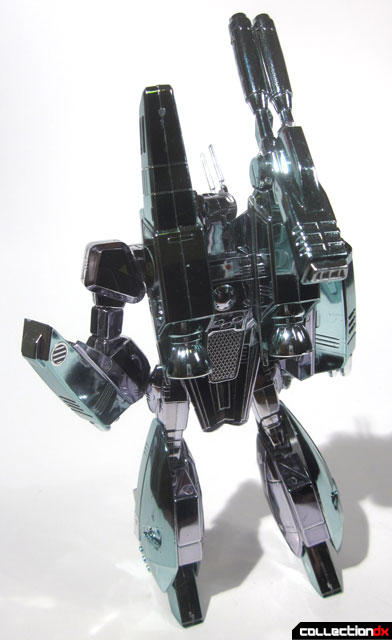 These kits are a nice change of pace for me as they do not need any painting and the decals are stickers and can usually be built within three days. Building the kit was straightforward although I wish more of the green chrome were sprayed on the sides of the parts. 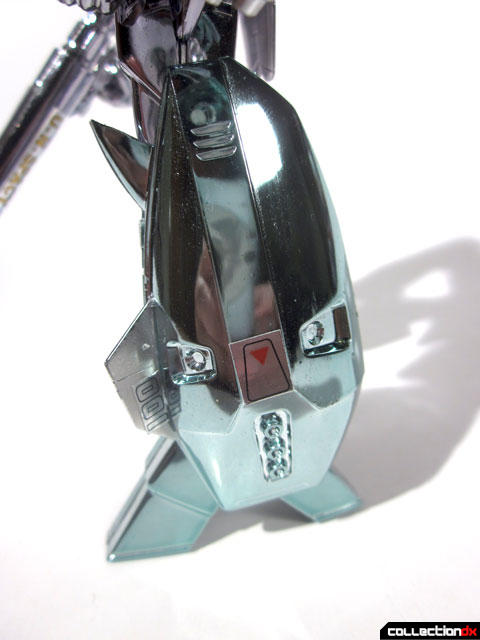 I say three days to build because I have to let certain parts cure before I can build more parts upon them. Those parts include the legs, arms and some torso parts. Although the shape of the Battloid is a bit off to today’s standards the build itself is nice with great fitting parts. 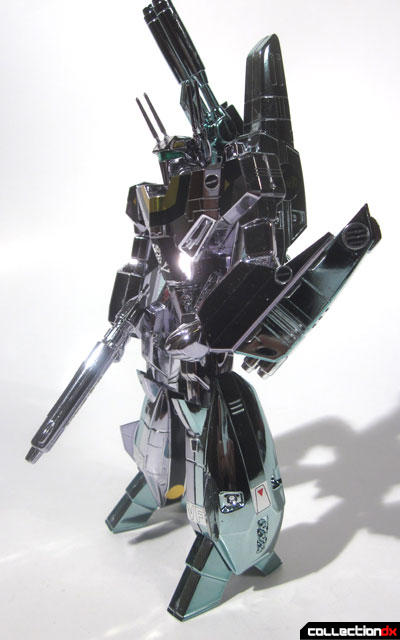 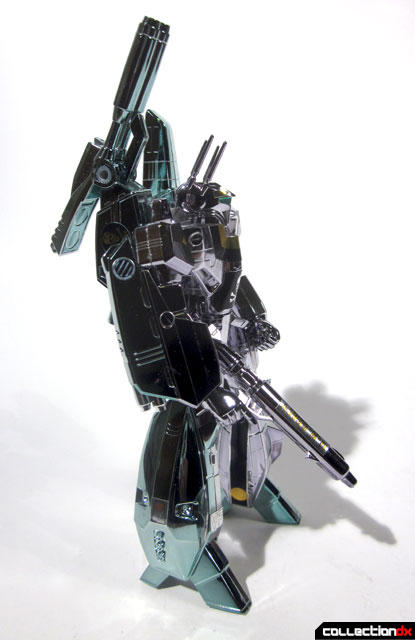 There is choice to use either Strike or Super parts, I was originally going to use the Super parts but it looked kind of boring so I went with the Strike set. Because of the chrome being thick it was difficult to slide the cannon pivot bar through all the parts. Great care needs to be taken when fitting these parts.

The kit comes with a small sheet of foil chrome decal stickers. Unfortunately the sticker adhesive did not have enough strength to stick to some of the glossy chrome parts. Some liquid glue should be brushed under certain stickers to keep them in place. 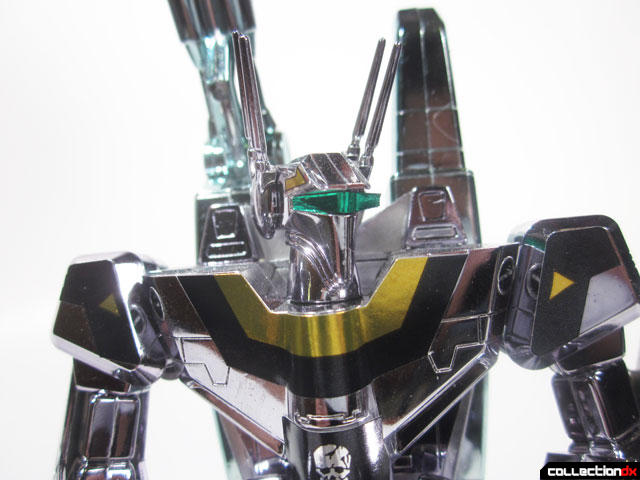 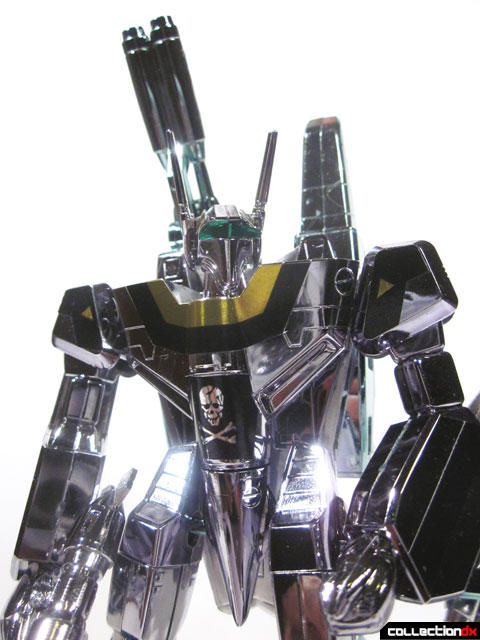 Standing back this is one standout looking kit that looks great as eye candy filler in your Macross display. Although the shape of the Battroid is a bit dated, the two excellent chrome colors and foil stickers more than make up for it and a creative way for Bandai to use an outdated mold. These kits are still available for less than $10.00 myself buying this kit at a local hobby shop for the buy me price of $6.00. Have a little fun and buy one today.

Wow, beautiful! Love the chrome finish on this one.

Thanks! when I saw that is was produced in two colors I was sold on it, and any classic Macross item for less than $10 is always good!

Hmmn. Since these have clear plastic underneath, maybe buy an extra and use some sort of chemical bath to strip the chrome and have yourself a clear valkyrie.

Thats exactly what im going to do with the 1/72 VF-1S. The chrome comes off easily with oven cleaner.