I'm not a particularly skilled model builder nor even a huge fan of Neon Genesis Evangelion, but I picked up this kit a few months back in a lot of toys that I bought from a friend. It's an interesting piece both in terms of the character itself and the method of construction of the kit. Unlike your typical model kits, this one has a regular skeleton, but a rubber outer covering over it. Then additional pieces are added to the outside for more detail. 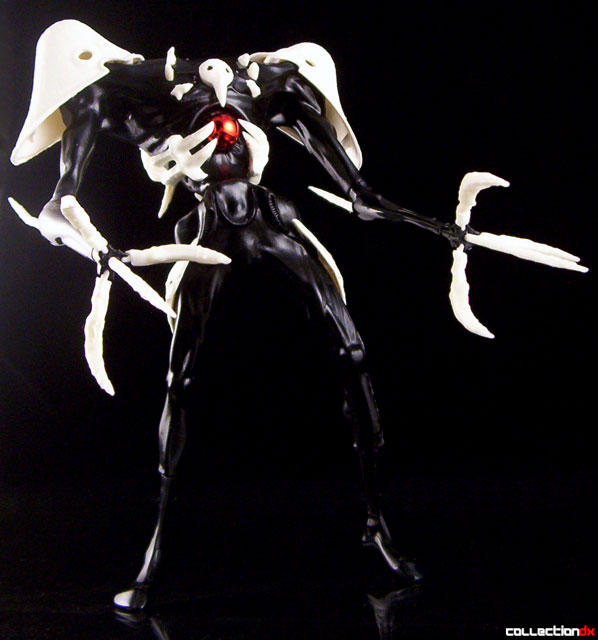 When I got the kit, the skeleton had already been assembled (my friend started the project, but never finished). But it appeared to be fairly simple to put together. Then you connect the face, ribcage and the core (the red piece in the stomach). This is done by pushing some tabs through the front of the suit and then attaching them to another piece on the interior. The problems begin with actually getting the skeleton inside the suit. Have you ever seen one of those cartoons (like Itchy and Scratchy) where one character reaches down another's throat and pulls out his skeleton? Well, imagine then trying to put the skeleton back in the same fashion. Not an easy task. The opening in the suit is rather small. Once constructed, it is obscured by a 1" x 1.5" covering. 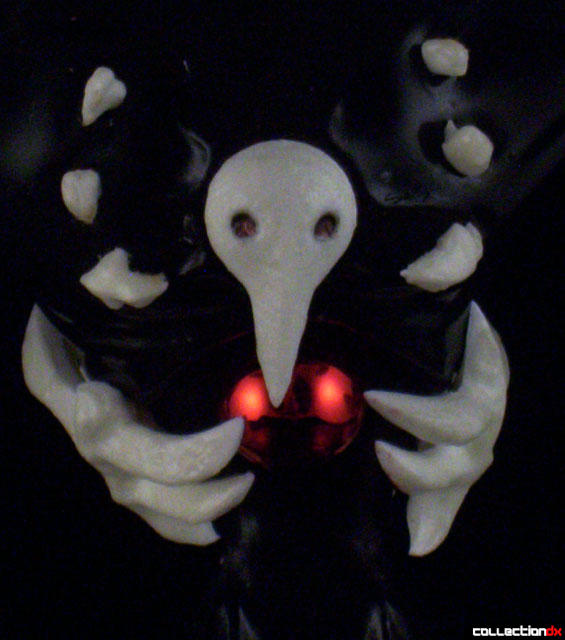 Once you've gotten the skeleton in, you push the arms and legs to the outer openings and then attach the claws and feet. But be careful, the feet are thin and the connector on the left leg of mine broke and broke easily. I've never been so shocked to have a toy break on me. I wasn't applying hardly any pressure at all.

The shoulder parts connect pretty easily onto a ball joint protruding from the skeleton and allow for a small degree of movement, but they also pop off very easily. The other boney pieces on the front just pop into the suit but the pieces on the legs need to be glued to a base on the outside of the legs. Finally, a plate goes inside the back covering and the final outside piece connected to that. 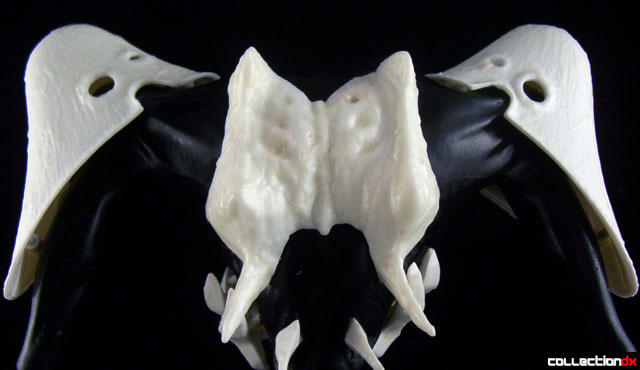 Normally, I wouldn't bother painting any of my kits, but since this one has simple one-piece parts that don't require much talent to paint, and since I had a tube of white glow in the dark paint lying around unused, I figured it would look cool if I slapped it all on this thing. Though the claws are supposed to be black in the anime, I thought it would look better if they also glowed. 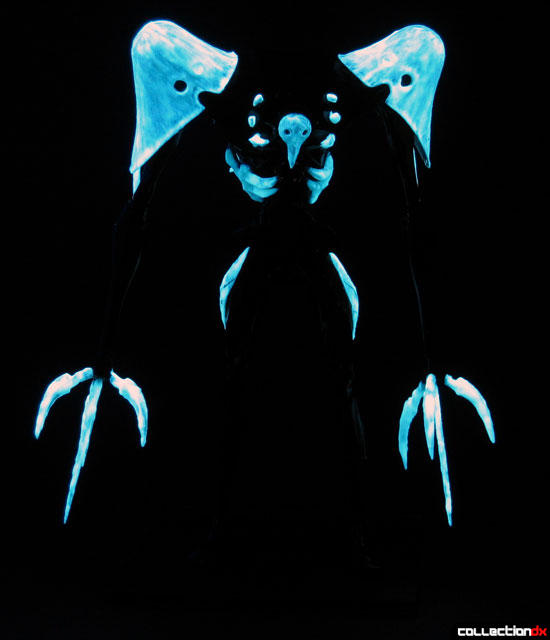 In addition to looking cool glowing, the glow paint also gives the parts you paint a very bony, organic look. It wouldn't look good in the light on a more typical robot kit, but on this one, I really like it.

Sachiel also comes with little unpainted figures of Hikari Horaki and Kensuke Aida. Visit our website https://freespinspromo.com and get exclusive sign up free spins and no deposit real money bonuses I'll not be painting those, for lack of the ability to do so. The kit is interesting, but its design (big body and small thin legs) makes it very top heavy and prone to falling over. Furthermore, while movement is possible, maintaining a pose really isn't. The rubber suit will always pull at the limbs and force them back to their original position. It likes to bend forward at the waist. And honestly, it's not as fun to put this together as a Gundam kit. So unless you are just a huge Evangelion fan, you can probably do without this one. 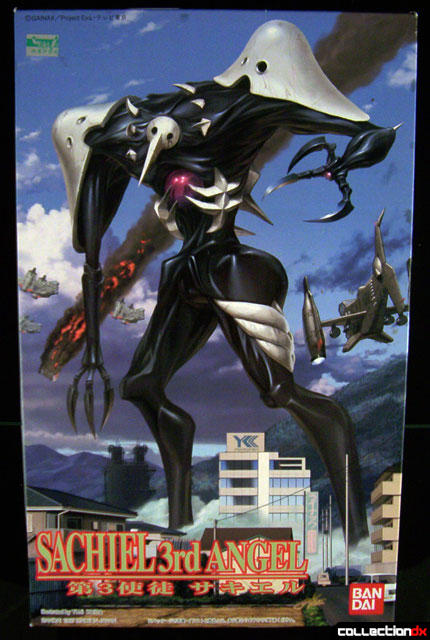 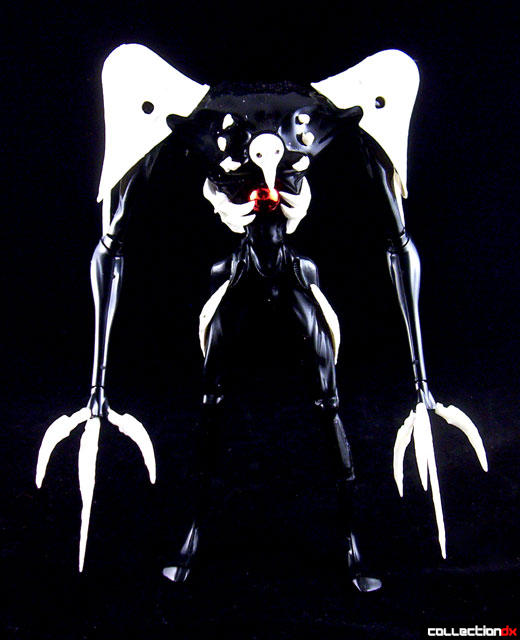 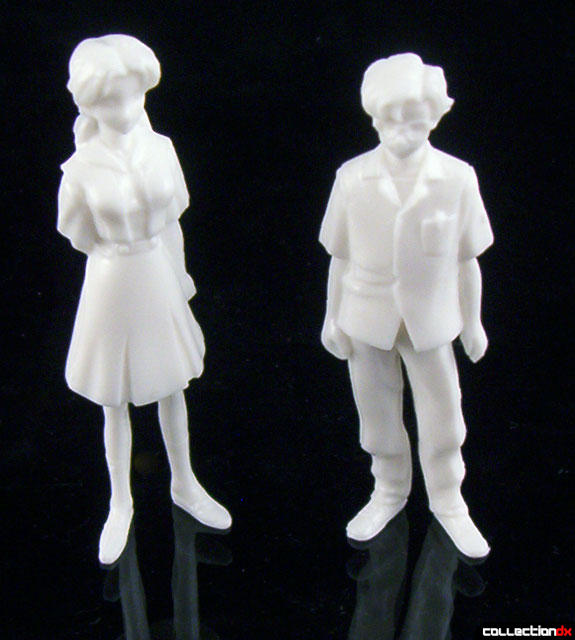 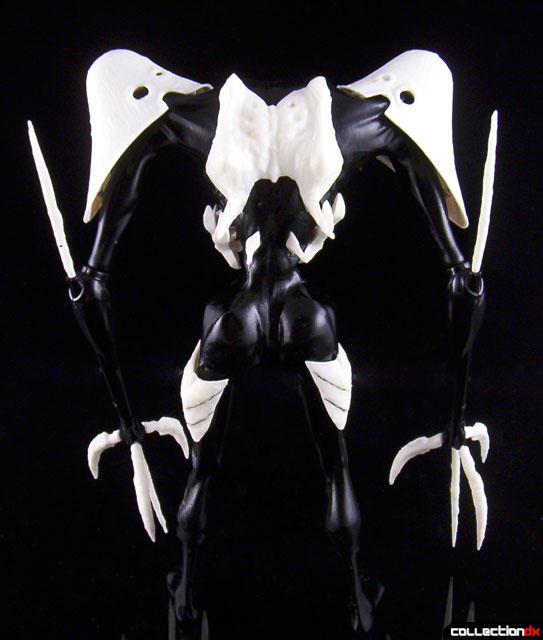 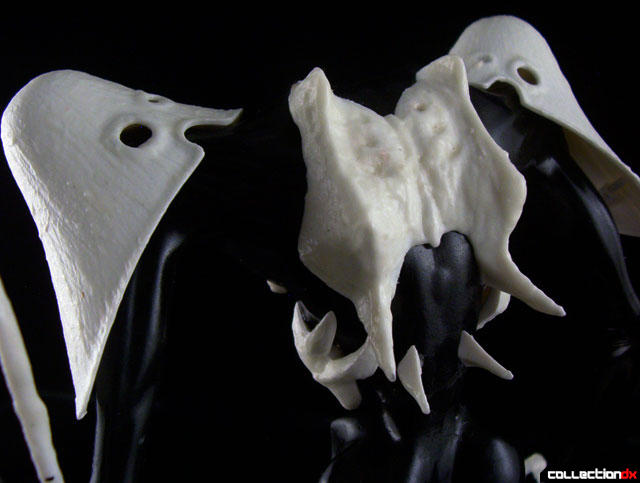 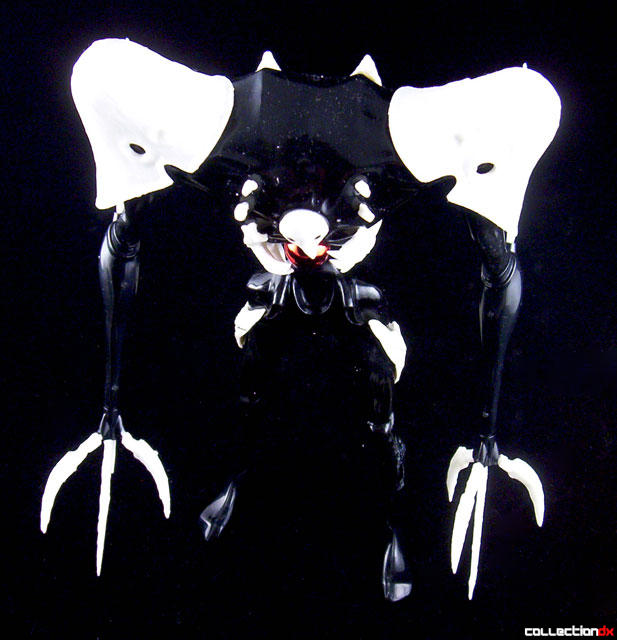 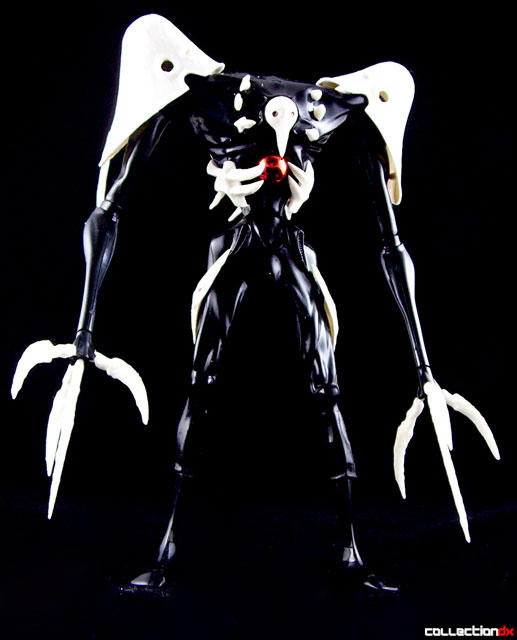 So in your opinion, Nekrodave, would the 3rd Angel- Sachiel have been more successful as a poesable model if it had used a complete exo-skeleton design (no internal frame/rubber skin) like any other robot figure, or could this have been designed better with what it is now? Did/can Sachiel only be made this way as an LM-HG, or could something different have been done for it?
.
Also, do you have any of the LM-HG series EVAs? They, too have a limited rubber skin on the elbows. Do they also resist posing like Sachiel's here does?
.
BTW, nice idea with the glowing paint! You're right- it does look more organic that way. I'll have to think about that when I [finally] put mine together.

Maybe it would have been better if the suit wasn't all one piece and there was a space at the shoulders to allow for better poseability. Other than that I'm not sure how you could do it better as a toy. I don't think I'd like it if it were made entirely out of plastic. I think the rubber suit is a good idea and I don't really blame Bandai for how this one came out. If anything, it's a nice try at reproducing a weird character design. Making this look good AND be functional would be a tall order, imo. (Keep in mind, I am by no means an expert on this series, this character or model kits, so someone smarter than I might have a much better idea!)

I also have the Eva-05 LM-HG, but it doesn't have any rubber parts (besides the head). There is no articulation at the elbows on that one, which I find weird. And it can be a bit awkward when the rather large wings are on it. But otherwise, it poses fine. I've also got a little white glow paint on the wings of that, as well as red glow on the lips. I might paint the lance glow blue at some point.