Much has already been said about the story of SF3D came to be through the pages of Hobby Japan and the top art design and visionary talents of its creator Kow Yokoyama. Nitto was the original manufacture of the SF3D line, which has since been rebranded as Machinkreiger abbreviated as Ma.K. After a short run of only 23 releases Nitto had to cease production of these kits due to intellectual rights issues between the involved parties. 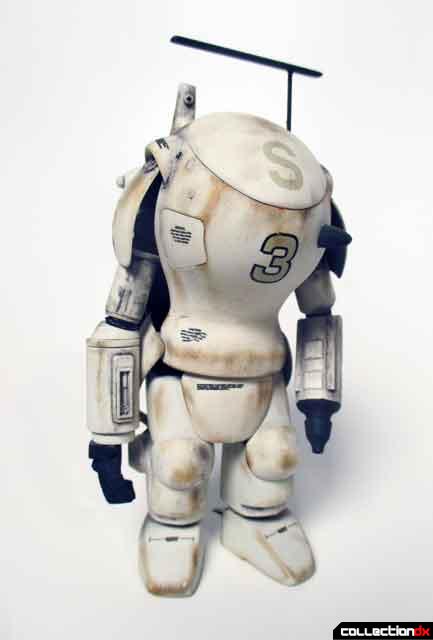 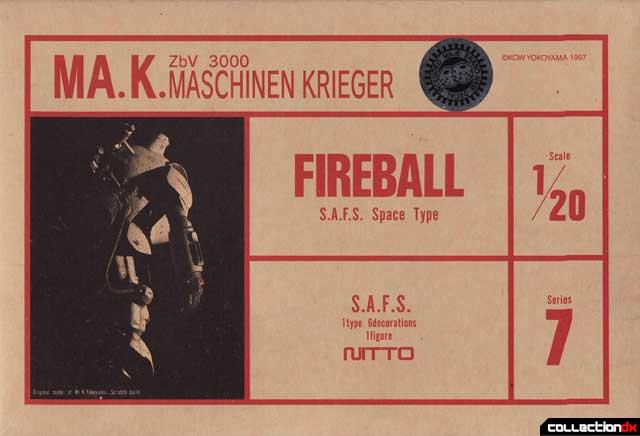 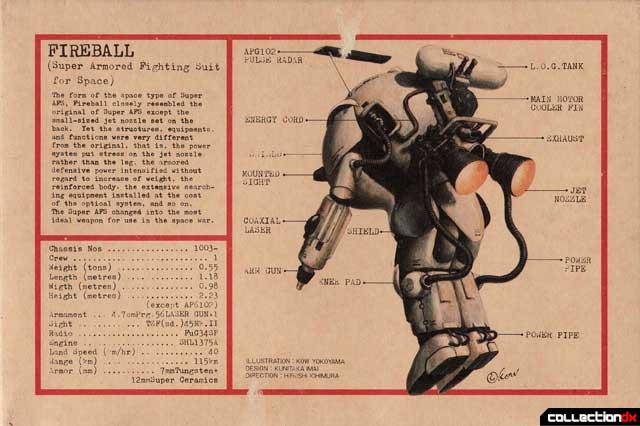 I do not actively look for these later Nitto Ma.K kits but they somehow make it into my hands when I least expect it. A couple of years ago my friend from my IPMS group told me he had a kit like my other SF3D models and the following month he gave me this wonderful Nitto Ma.K Fireball kit. Unfortunately he had misplaced the metal parts used in the construction of this kit, but a cool free Ma.K kit, even with some parts missing, is still a fine gift if you ask me. 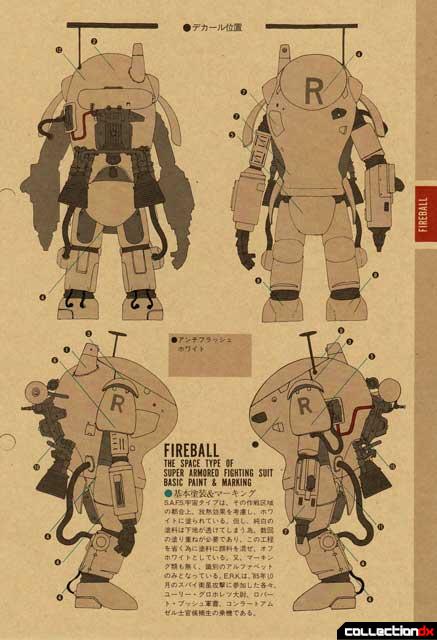 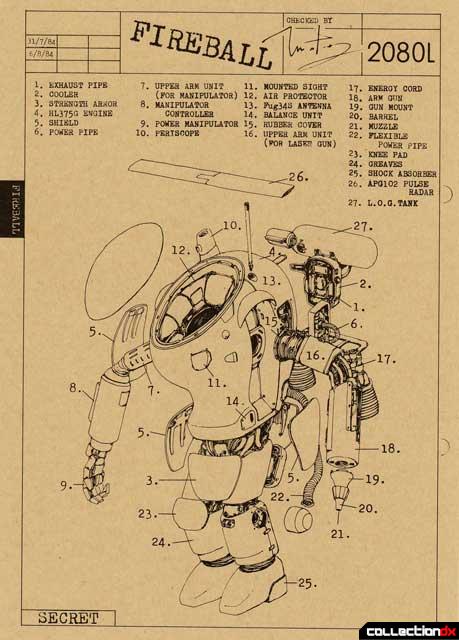 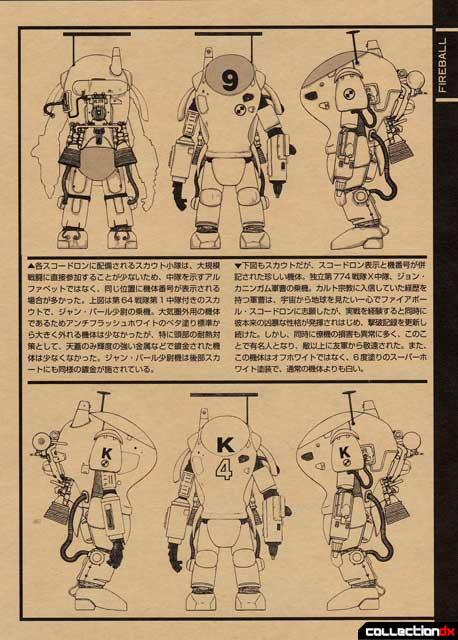 One model I have always wanted to build since I was a kid was a SF3D SAFS kit, something I had never seen for sale even in the 1980’s. So there was some real excitement when I was given this kit, as I had never built a SAFS style Mecha kit before. 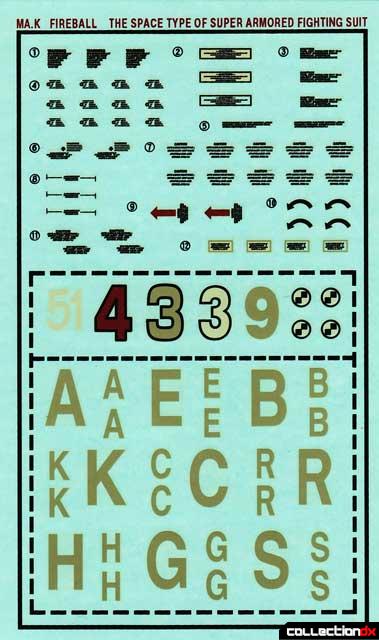 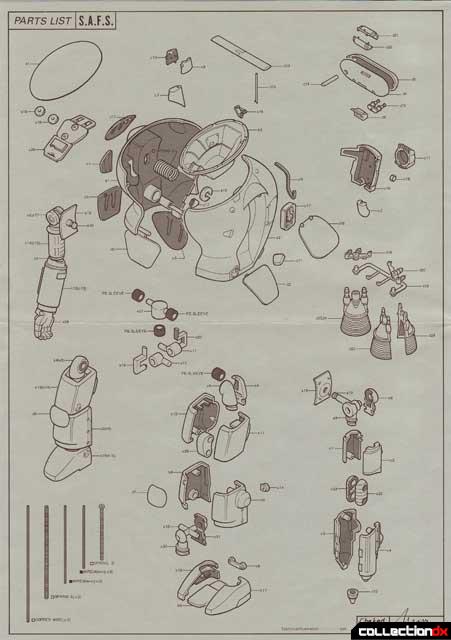 The Fireball was the Space version of the iconic SAFS armor and played an important part in SF3D lore.

First thing I noticed right away from the reissue Ma.K kit is the type of plastic used in the kit, which seems a bit more brittle compared to the high quality plastic used in the original SF3D kit. I originally though it was this kit only but when I was given another Nitto Ma.K kit it also had the same type of plastic. Keep in mind the kit is more than buildable but it is a noticeable difference and handles a little different than the SF3D kits. 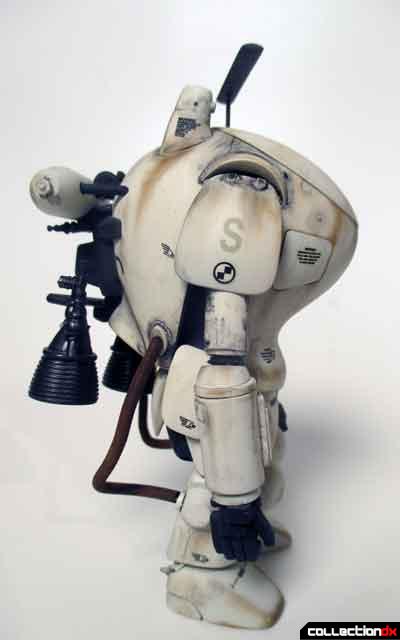 Fireball is a very straightforward build, and I did not experience any issues with fit or construction. The most difficult aspect of the kit is assembling the body halves. While gluing the parts is not difficult, it is getting the front seam out smoothed out without destroying the shape that can be difficult. Because of the plastic I also had to work with the joints carefully together as the parts kind of felt stiff when the joints should be free flowing. 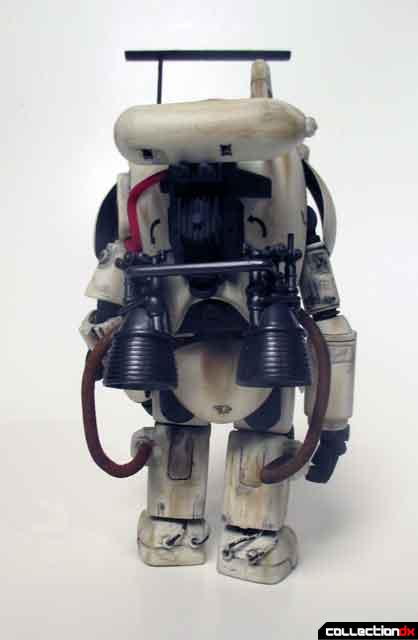 Also make sure you over measure for the heel hoses, as you will need sufficient hose to push them through the holes in the heels. Luckily I was able to find some extra polycaps and other varies hoses from other SF3D/Ma.K kits and was able to recreate the parts that were missing. The metal power spring hoses were found as aftermarket parts when I was in Japan.

One aspect of these early Nitto kits was the lack of instruction on attaching certain detail parts to the kit. For example the black sensor on the nose had no placement mark, so I ended up putting on backwards and a little forward than it should be. But in the high custom world of Ma.K, I’m sure it was encouraged to do things just a little different with each one of your Ma.K kits. 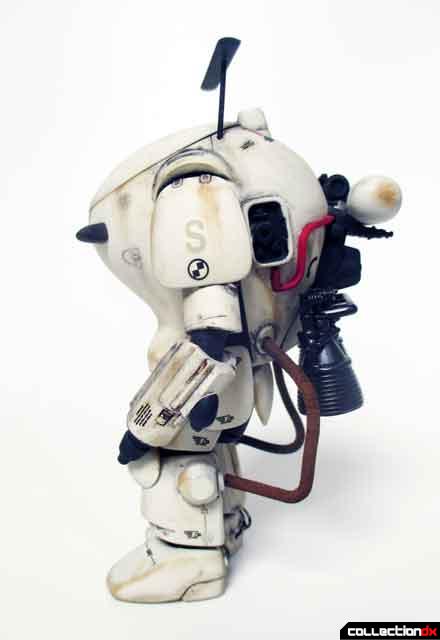 When I started to paint the kit this is where I take a huge dive. You might not be able to tell but this kit was painted no less than five times. Why? It was near impossible to match that off white color used to paint these Fireball kits. I tried three types of Tamiya tans, one Humbrol off white and one Testors white and for the life of me I could not find any match for that Fireball white. And to throw salt in the wound, when I finally felt I matched the color I dropped the model in the kitchen and broke the body in half. I swear this kit was destined to be tossed back into its box and to be forgotten as a failure never to be revisited.

Then I finally found the perfect match with Guynotes Interior White. BAM! A perfect match for that Fireball off white color. This was the first time I had ever used Guynote paints and I was more than impressed with the paints as it dried to a nice hard satin eggshell finish. No wonder so wonder so many Ma.K Modelers uses these paints as they seem to have all those unusual alternate colors that are used on Ma.K finishes. I was able get a scan of the instruction sheet of the recent WAVES Fireball offering and used it help complete the interior and detail painting of this kit. 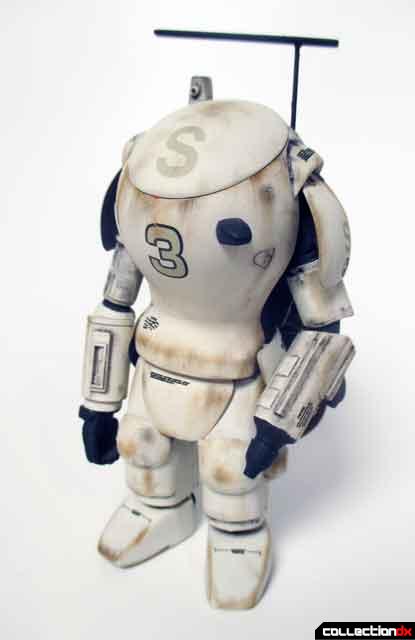 Here is my only real complaint from the original Nitto SAFS releases and that is how the entry hatch can only be built in an open or closed position. When open you can put the figure’s head in the cockpit and attach various other parts onto the interior of the hatch door. Closed is just a matter of gluing the hatch closed. But there is no hinge included to make it a positional hatch. Thankfully, this has been updated with the newer SAFS kits by WAVES, but when building these older kits you will have to decide if you want it built open or closed or custom build your own hinge.

Once it was finally painted I sprayed a gloss coat for decals. As mentioned before these Nitto Ma.K kits contain different decal markings from the original SF3D kits. A very nice update of the kit that even the promotional sticker on the box mentions. Across the board I am not a fan of the original decals of the Nitto SF3D kits, they are very difficult to work with, thick and never seem to adhere to the kit. These updated decals apply beautifully and I did not have any issues when applying them to the kit. Definitely, a highlight of the reissued kit. After a flat coat it was time to apply all the external parts.

Assembling and attaching the jet pack to the kit can be interesting experience. I had no idea how the nozzles attach to the pack portion but it appears it just fits snug against the pack with tension. I attached all the other exterior parts including the hoses and external tank. Look online for Fireball pictures to get a good idea how these items attach to the Fireball. 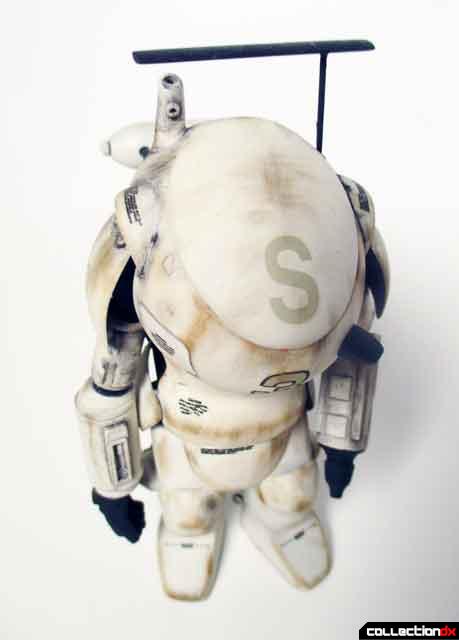 The only real tricky part was attaching the dark grey vane wing on the upper part of the body. It is real tedious to get it alighted correctly, I tried a few techniques but it dried somewhat more forward than I wanted. Seriously after painting and stripping the kit five times I just wanted to finish it, so I left it as is. You can add some extra hoses that were not seen in the original release but appear to be in all the current Fireball builds. This includes the hoses that go from the tank to the top of the jet nozzles. I plan to do this at a later date. 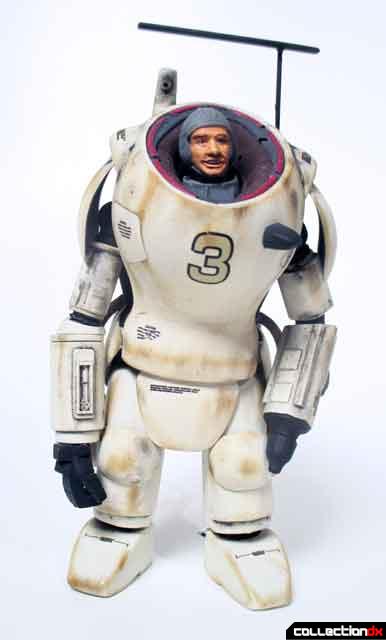 I finally applied an oil wash and used the Tamiya Make-up weathering kit to dirty my fireball up a bit. I really did not spend too much time on weathering as I was finishing Fireball up on the 11th hour before our IPMS contest the next day which I was able to walk away in 3rd place in the Sci-fi/Misc category. Not bad for a 30 year old model kit!

Besides the color matching nightmare, overall it was nice to finally build my first SAFS after all these years. Considering its age these Nitto Ma.K kits still hold up very well compared to todays kits and still can be contest winners if you want to put some heart and soul into assembling this excellent kit.

I have a few kits I finished last year that I finally photographed.

I'll have a bigger presence here on CDX from here on out!