After the Big Bad Beetleborgs win the battle against their comic-book foes, the Magnavors, the three kids think that their lives can go back to normal. However, Les Fortunes- the twisted brother of the man who created the Beetleborgs comic book- has plans of his own, and decides to create a new kind of original villain to get revenge for all of his brother's success! So, as Les and his new army- the Crustaceans- move in on the city, the original Beetleborgs comic book creator, Art Fortunes, draws up designs for a new type of super hero, and the funny phasm Flabber brings them to life with his special brand of magic. Now, with new armor, new weapons, and new giant beetle-shaped machines, the Beetleborgs Metallix are now charged with defending Charterville from evil once more.

The Platinum Purple Battle Vehicle is one of three new giant armored vehicles custom designed by original 'Beetleborgs' comic book creator Art Fortunes. It is based on the real beetle, and spots the familiar small antennae extending from the front of its body. Piloted by Jo McCormick- the Platinum Purple Beetleborg Metallix- it flies with two large-diameter turbofans, a pair of powerful jet engines, and has a pair of small energy cannons built under the nose of it.

Even though it isn't a part of any of the "Power Rangers" series of Deluxe transforming robots, the Platinum Purple BV stands quite well on its own, and spots a similar lineage in toy design from Bandai.

The six small black plastic wheels spin freely at the end of the three dark gray landing gear assemblies, and the light gray laser cannons on the nose are soft PVC. The two jet engines on the long tail can each spin separately or together through 360Â°. The large wings pivot at the base where they're mounted, and click forward/backwards together via an internal gear set-up.

What makes the Platinum Purple BV the most unique of the three is that it has a special mounting feature under each turbofan that can lift the other two BVs like a flying crane. This way, the Deluxe Chromium Gold BV< (sold separately) fits under the left wing, and the Deluxe Titanium Silver BV (sold separately) can fit under the right wing, and all three can travel to the battle zone faster. The combined BVs are a little awkward and the connection between them is not very stable, but it's an interesting change from having to get a larger carrier-like robot or vehicle to move all three. To release the clamps from the tops of the ground-based BVs, all that was done was to pinch the tabs above the separate wings together. This is quite a convenient way to get them around the house compared to doing that juggling thing...

As far as I can tell, the Deluxe Platinum Purple BV is identical in every way to its Japanese counterpart- the DX Stealth Gyro, from the Metal Hero series "B-Fighter Kabuto".

It is a good little toy, but it took a bad drop-or-two since I got it. It's the most fragile of the three, and I had to do a little amateur repair work, so the pivoting wings on mine no longer work correctly. The few paint details are sharp, and the large & numerous decals were a little tricky in some places to apply but they still look good. In many ways, it is just as good, if not better than, some conversions that were made to some of the Deluxe "Power Ranger" zords by Bandai America. The only discouraging part may have been that it couldn't transform or combine into a larger robot like some of its tokusatsu [Japanese live-action] or Anime cousins do, but it worked out well, and I'm not disappointed. Simple, but fun! 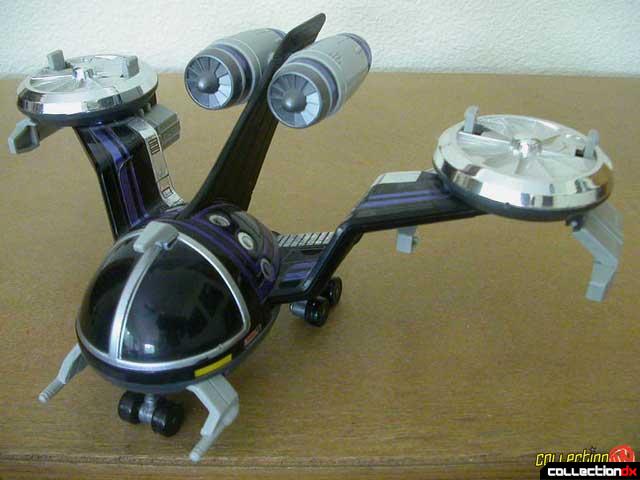 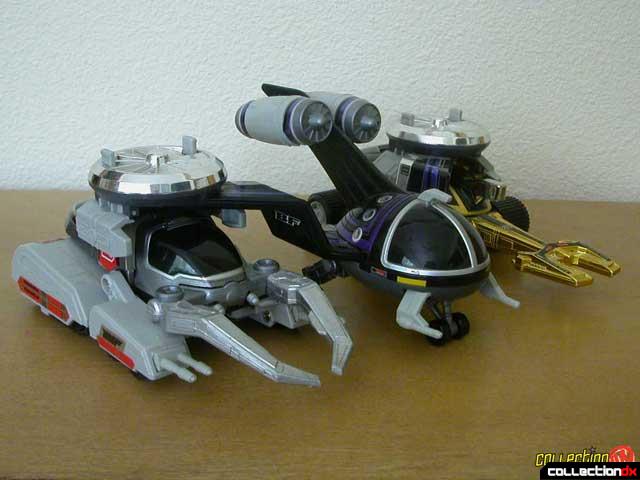 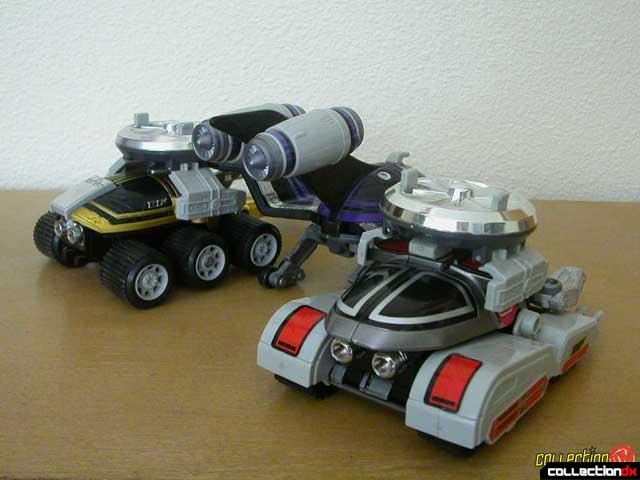 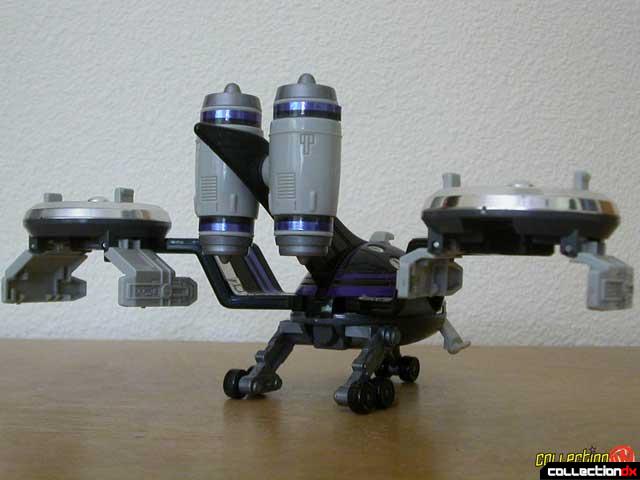 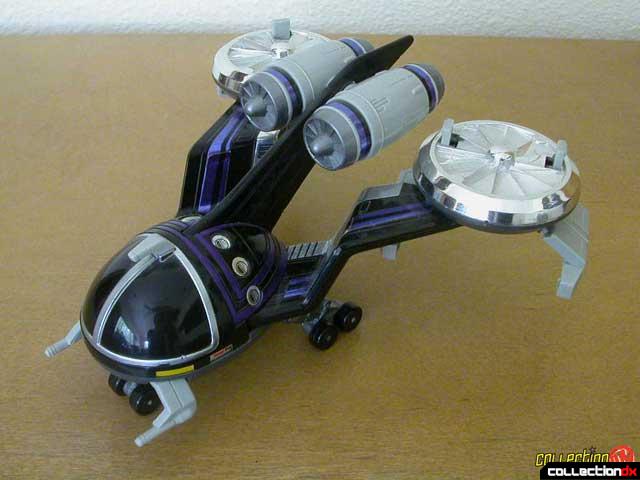 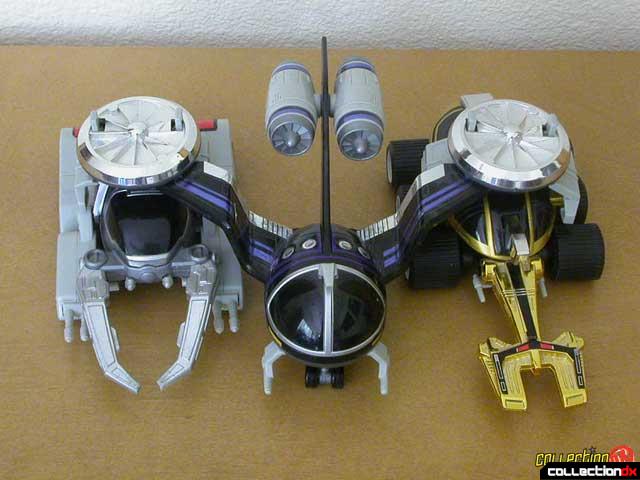 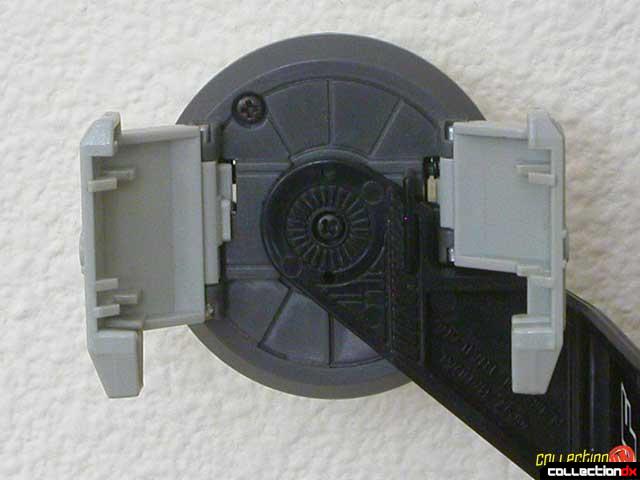 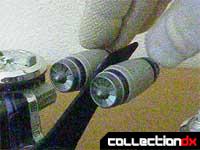