Daimon rocks. He's the main villain from my favorite yokai movie, Yokai Monsters: Spook Warfare, a movie featuring lots of cool, creative yokai interaction and, of course...warfare! Daimon is a sort of ancient Babylonian vampire-wizard-guy who is able to assume different forms with the power of his magical wand. Besides the wand, he packs a groovy belt and a bad attitude!

In the movie, Daimon takes on our pal Abura Sumashi and the rest of the gang...including his nemesis, Kappa.

Now, what's interesting about this figure is that it's standard-sized and that it's from M1go. First of all, ST vinyls are the norm for M1, but yokai? M1go is primarily a kaiju toy manufacturer, and while the "Yokai Monster" movies are certainly tokusatsu, they're not really your traditional daikaiju eiga (movies involving giant monsters stomping cities flat). 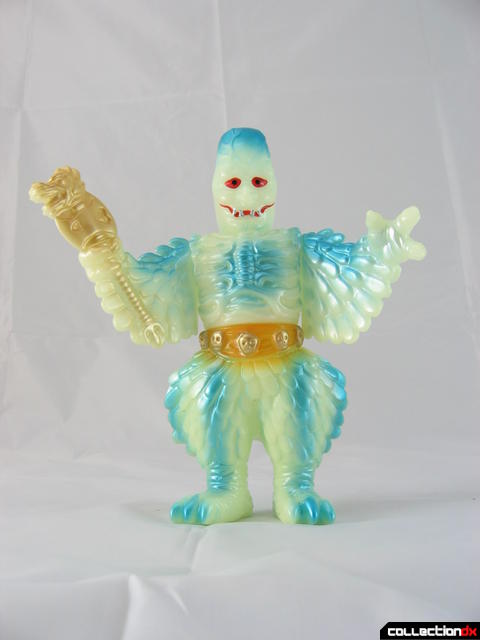 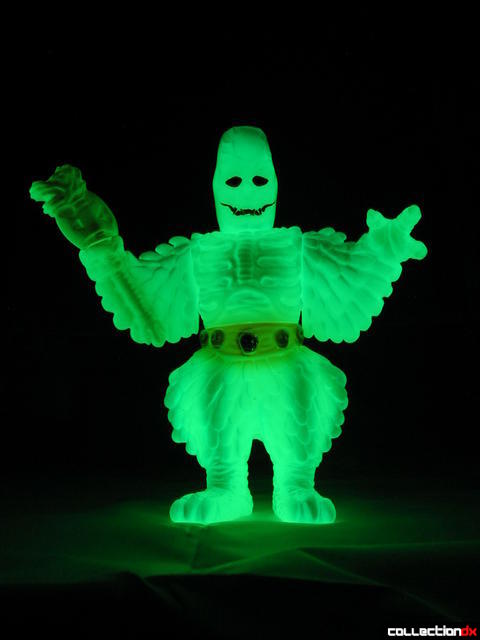 Yokai flicks are creepier...kinda tokusatsu meets supernatural horror (but still suitable for younger folks). Anyway, M1go has made no vinyl yokai other than Daimon, so the character choice here is pretty interesting.

Furthermore, M1 made the figure standard-sized, while all the existing vintage yokai vinyls from Nitto are mid-sized (~6 inches). Oh well...I'm not complaining--I love the character and I love this figure. 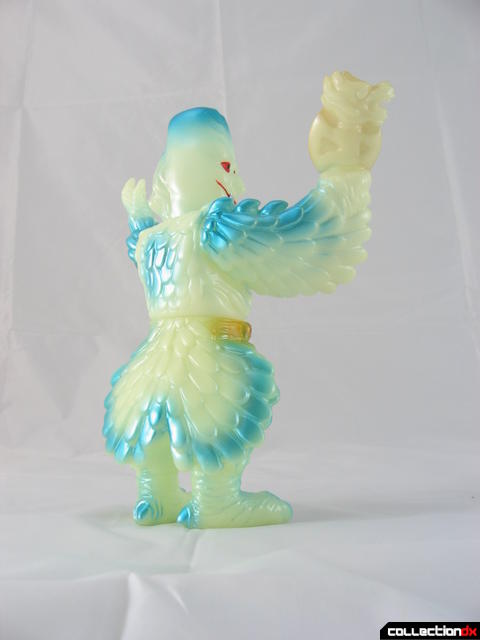 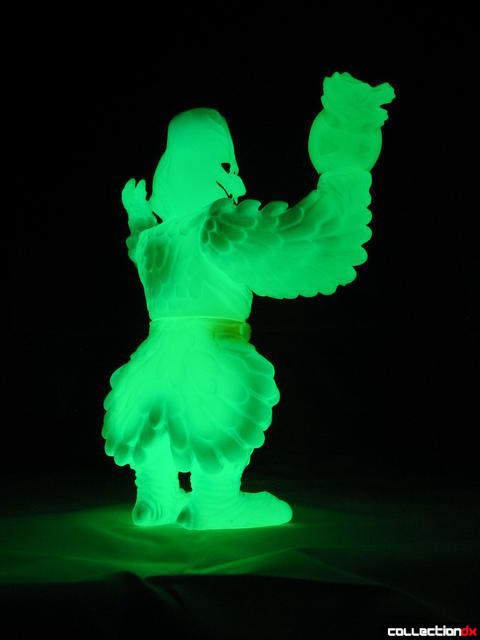 This Daimon toy is pretty underrated, in my opinion, and I think that's mostly due to it being a fairly easy-to-find vinyl. Regardless of whether you're looking for this glow-in-the-dark colorway or any of the others, those well-versed in searching on Yahoo!Japan should be able to find readily enough. If you're not a Y!J user, but are patient, they pop up on eBay or Skullbrain's For Sale board from time to time.

I can't help but think that if it were much more rare, it would be more talked about and sought-after. 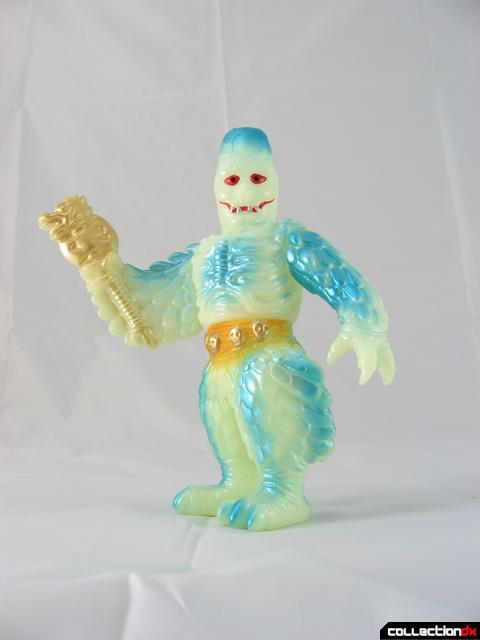 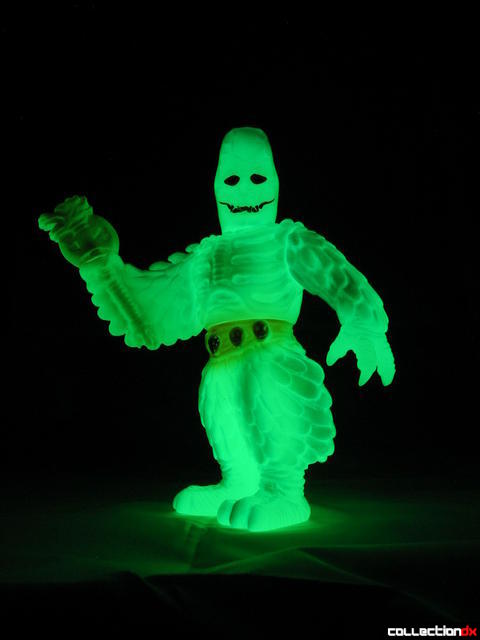 Anyway, my photography unfortunately doesn't quite do the sculpt justice because of the low contrast in the images: glowies' paint jobs are often pretty light and can look washed-out against a white background. Take my word for it, though--once you have one in-hand and notice all the great detail in the sculpt, you'll see why this toy kills. 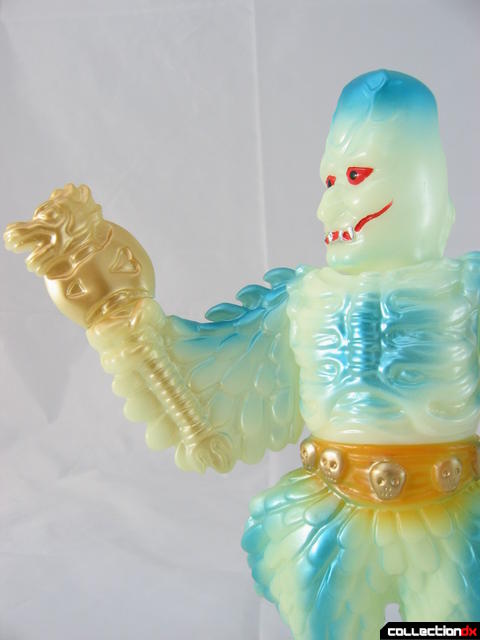 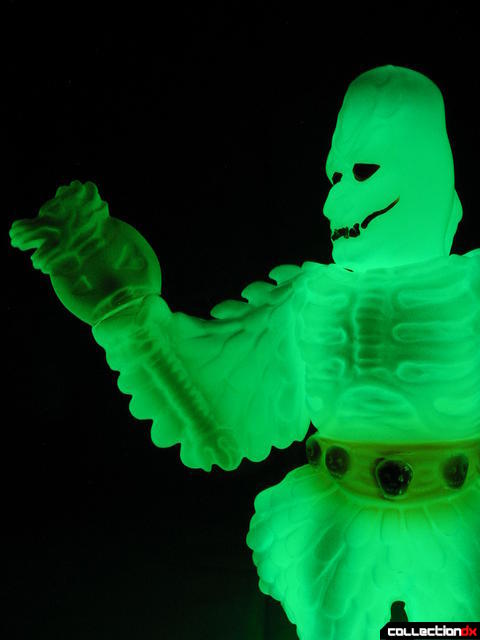 He's articulated at the neck, waist, and shoulders--like that matters for a vinyl!--and the paintjob consists of metallic blue*, yellow, and gold spray, with red, black, silver, and gold hand-painted detail. As always, you can expect a fantastic paintjob from M1.

[* Metallic blue is generally an overused color for glowies--in my opinion--but, hey, it's very striking and as you can see, it's translucent enough to allow a lot of glow light through.] 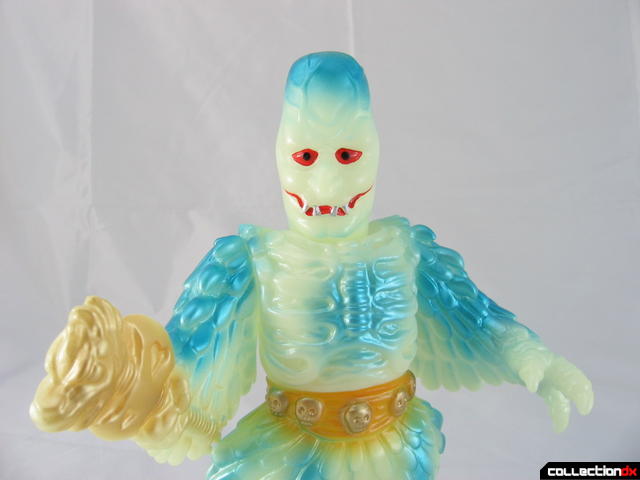 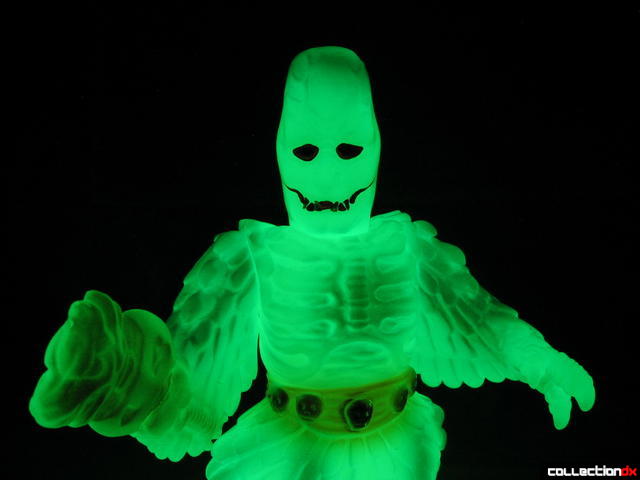 I definitely recommend this figure, especially if you're a fan of the movie...and if you haven't seen Spook Warfare, you need to!

And if you are interested in learning more about traditional Yokai monsters, be sure to check out the book, Yokai Attack! The Japanese Monster Survival Guide. It's available in Japan, the US, and the UK. The book is written by good friends, Matt Alt (of ToyboxDX fame) and his wife, Hiroko Yoda, both stars of 2005's Great Yokai War.

Actually, M1 did make at least one other yokai vinyl, a 4.5" tall Kara-kasa. It's really goofy looking though. I'm not a fan of it.

I dig on your glow collection, great set of figures, again..I'll keep my eyes open for these kind of items for you.

Dave and Sanjeev, what year is this toy from? I noticed many of these items are from the sixties. Accordingly these are some of the oldest items being reviewed on Collection DX.

The first M1 Daimon was actually initially released in 1997. I'm not positive about the glow version specifically. But the rest I reviewed are definitely from the '60s, and yes, the oldest toys reviewed here. I actually had to ask Josh to manually add dates for before 1970 to the database so I could list them properly!

Hehe...yup! 1997 it is. Always pays to cross check with ClubTokyo for this sort of thing.

So, yeah, the film Daimon comes from may be old, but this toy is just over ten. Nothing I would call "vintage", but certainly one of the nicer original pieces (NOT a Bullmark reissue) from M1.

As for glowie reviews, I must admit: these reviews are pretty quick and easy to pump out! Time's tight these days, so full-blown reviews of gimmick-laden gokin must wait...