Of all of Star Trek, my favorite episode will always be the pilot episode The Cage and its subsequent series re-edit The Menagerie Part 1 & 2. Less Sci-fi Adventure and more Outer Limits, The Cage tells the story of the pre- Captain Kirk crew commanded by Captain Christopher Pike and the USS Enterprises visit to Talos IV, a mysterious planet with omnipotent aliens and survivors of an ill-fated space exploration mission. It really was a twisted and somewhat tragic episode and it stuck with me when I first watched it as a kid in the 1980’s. 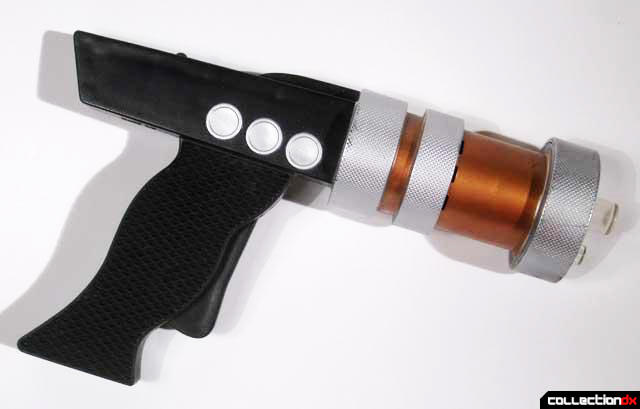 Not to waste footage, Desilu Productions subsequently reedited the pilot updated with the new Captain Kirk crew, with the plot concerning the mutiny of Mr. Spock and the now invalid Captain Pike with the USS Enterprise and their controversial return back to Talos IV. It was a cleverly edited episode that added a new dimension to Mr. Spock’s Character and its bittersweet ending also stuck with me when I watched it as a kid. 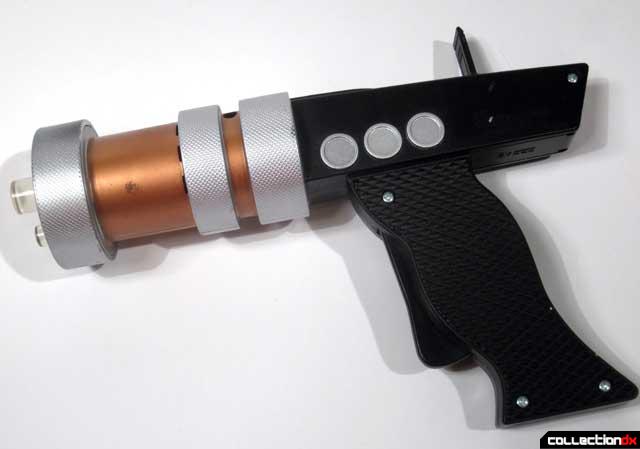 In the 1990’s Playmates acquired the Star Trek toy License and overall I believe they did an excellent job with the line, releasing many items that appealed to both kids and collectors alike, including this Captain Pikes Starfleet Laser Pistol. Unfortunately I was not collecting toys in the 1990’s and I was just content with admiring Star Trek toys in the toy aisles at Target and Toys R Us.

Fortunately my friend, Nathan Wilson from Rhino Records Claremont, knew I was a huge 1960’s Star Trek fan, especially of the more obscure Christopher Pike character, and picked up this Playmates Captain Pikes Starfleet Laser Pistol for me for Christmas. It was great to add this wonderful and unique Laser Pistol to my American Sci-fi collection. 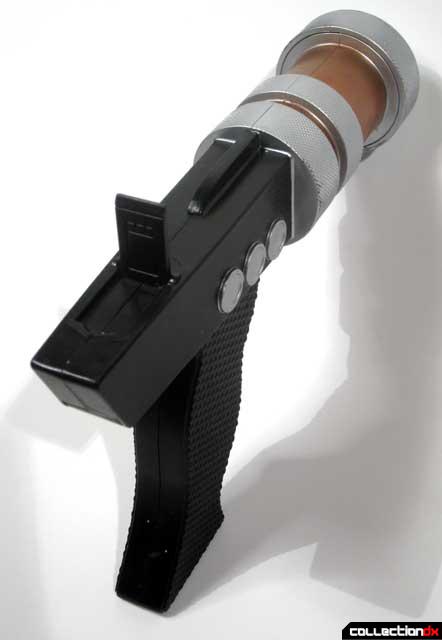 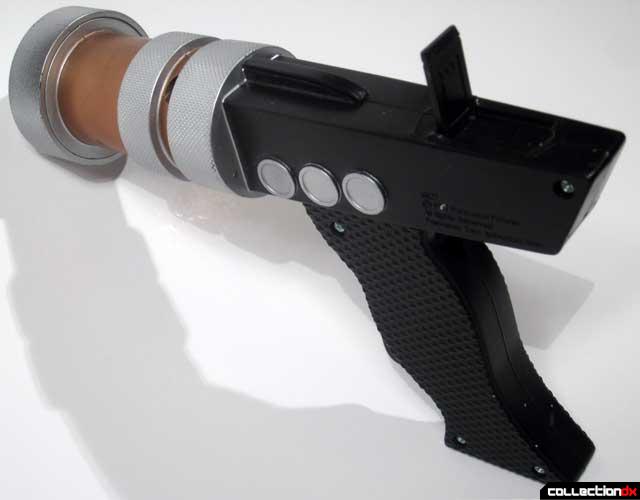 Although it was a very simplistic release, Captain Pikes Starfleet Laser Pistol is a solid and fun toy pistol. Made with sturdy plastic, it has a good weight and balance to it. The sculpt of the pistol is well produced, the gold and silver paint application capturing the classic look and era of the original prop. 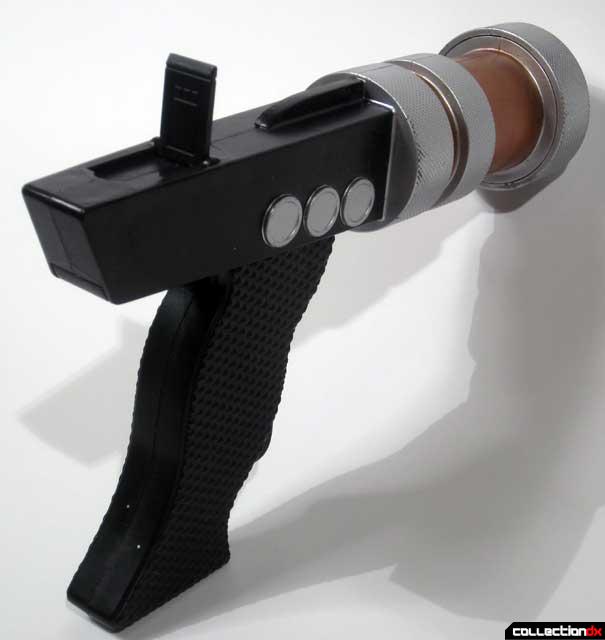 There are only two features associated with this relaese. One is a flip up sight that flips out on the back, simple yet effective, just use one’s nail to flip it out of the recess on the top of the toy. 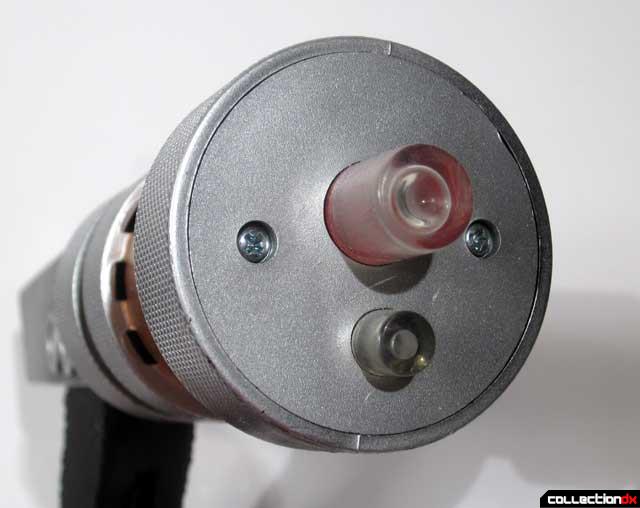 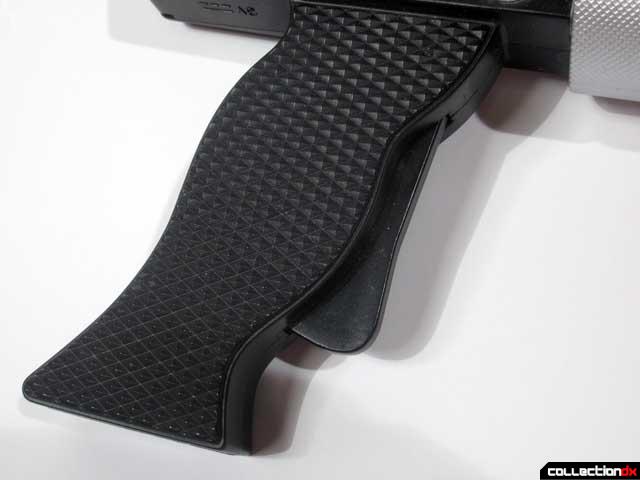 The second is a battery-operated light up tip and a dual sound effect. To change the sound effects just simply twisted the silver end of the pistol to either direction. Just pull the long trigger to activate the sounds and lights.

Solid enough for kid play but unique enough for serious Star Trek Collectors, Captain Pikes Starfleet Laser Pistol covers both groups very well. Although not as recognizable or iconic as the Star Trek Phaser, the Captain Pikes Starfleet Laser Pistol is a must own for the 1/1 scale Cospla Star Trek collection or if you are a fan of 1960’s retro Star Trek. Thanks again Nathan for hooking me up with this all those years ago.

©2013 Review and Pictures by Leonardo Flores and CollectionDX

6 comments posted
Okay, that is just cool! I

Okay, that is just cool! I didn't know Playmates made one for the pilot episode though.

Still waiting for a toy version of the Assault Phaser from "ST-V" and "ST-VI"...

I'm not sure if you noticed this in the Playmates Review Gallery as it has a few of your items in it. This is a really fun and obscure release and I had hoped you would personally like it!

Playmates getting Star Trek was one of the high points of the 90's. They produced so many great toys. I wish I had picked up more at the time, but I was just entering the job market. I still cherry pick a few here and there on Ebay.

Playmates 1990's Star Trek toys were one of the highlights of the era, I just wasn't into purchasing toys during those years ( I was in college and focusing on my Music back then) but I just enjoyed hitting up the toy aisles and I loved this line, especially when they released their TOS line. I was seriously tempted with buying them but I just didn't do it.

What I admire about Playmates and what I didn't realize until I wrote this review was they made great toys suitable for kids yet they were able to have enough coolness that adult collectors would enjoy. Very few toylines could pull that off but Playmates did for Star Trek fans both young and old. This pistol is a perfect example and glad I was finally able to give it its day in the sun here on CDX!

Great review man. People sleep on the 90s Playmates stuff nowadays, and their props and ships are still awesome even compared to products made a decade later. Proof that new collector's toys aren't always better than previous releases. These look accurate (to my casual star trek eyes) and are kid-friendly and sturdy. You can put this phaser on a stand in a glass case to display, and then hand it off to a curious kid to play with, without worry of breaking.

I'll throw this out there though to those wondering why sometimes loose phasers and ships in this line go for more than mint in sealed box examples. The batteries leak and you've got to be careful buying boxed examples as you can't always see the damaged battery box through the package, you have to open them up to check. Again awesome review and I hope to see more classic Trek stuff on the site.

You make a great point. Luckily I took out the batterie while in storage and the pistol works just fine. Another great feature to note about this product is that the battery cover closes with a screw and will stay firmly with the pistol for a many years.