Much of the innovation Transformers fans enjoy today came in the tumultuous time of Generation 2. As the line transitioned from repainted and repurposed 80's toys to wholly new figures, we started to see new gimmicks such as light piping, ball-joints, and pressure launched missiles. All three of these things were featured in the brief sub line known as the Cyberjets. They were originally released in 1995 but repainted and re-released several times down the road. Out of these, the most infamous and fondly remembered is the great and gaudy Decepticon called Hooligan. 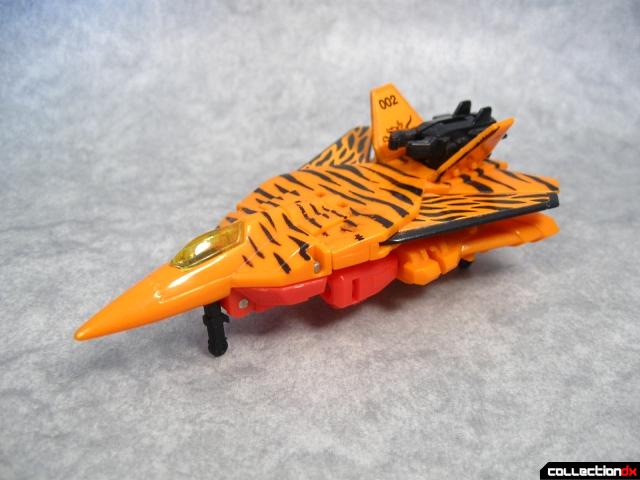 One look at Hooligan and you can see why he is so memorable. With his bright orange body and animal skin deco, this jet mode is highly evocative of real life Tiger Meet airplanes. Hooligan's F-14 Tomcat style vehicle mode is actually based on the Navalized Advanced Tactical Fighter F-22, which was a proposed carrier based version of the F-22 Raptor. While it never came to be, this design looks quite attractive and also neatly avoids the need to acquire a license before making it into a toy. 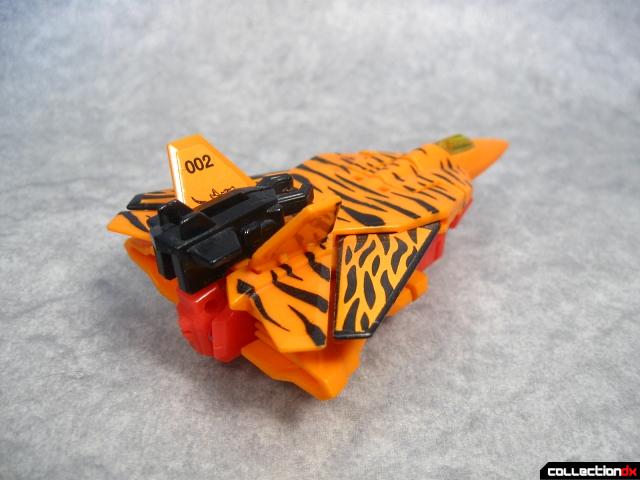 Hooligan is a sleek, compact all plastic toy who measures about four and a half inches in jet mode. These days he'd probably be classified as a Scout or Legion class Transformer. 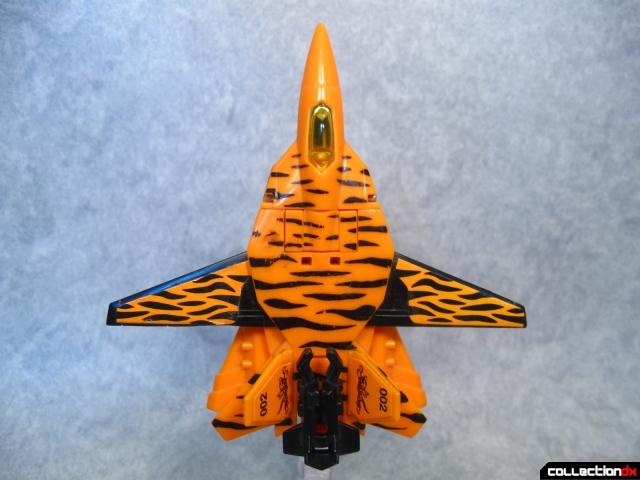 He features movable wings which is always an instant plus ten to your airplane's awesomeness factor. 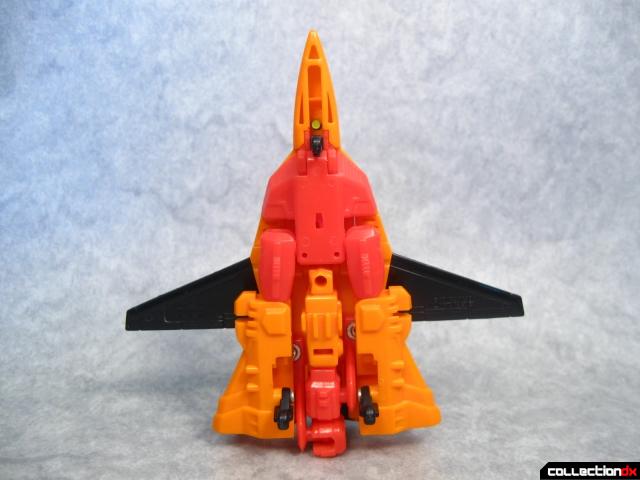 From below Hooligan's robot mode limbs are neatly arranged as a smooth underside. Although, his legs aren't really trying to pretend to be anything other than humanoid appendages. A lot of Transformer jets eschew the vehicle mode in favor of making sure the robot isn't just made of re-purposed airplane bits. 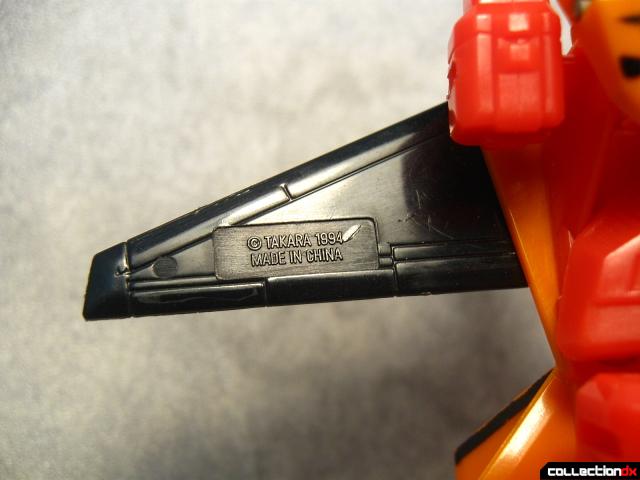 Underneath one of his wings is Hooligan's copyright markings. Like many Hasbro figures of the time he is dated a year before his release with 1994. Hard to believe this toy is almost twenty years old now. 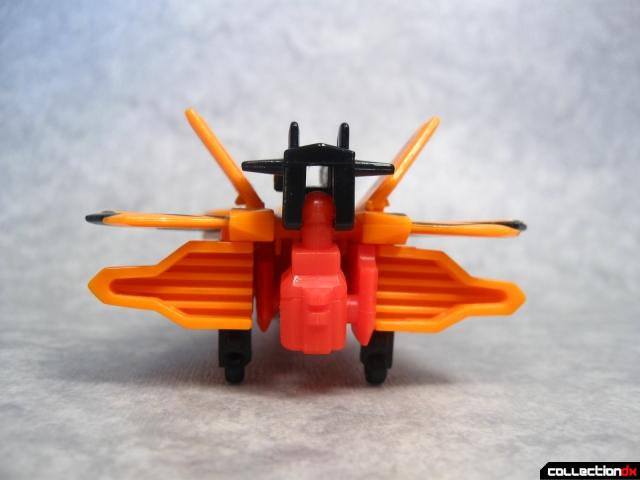 At the very least his feet end in some basic engine style detailing to make him suitably jet-like from the rear. 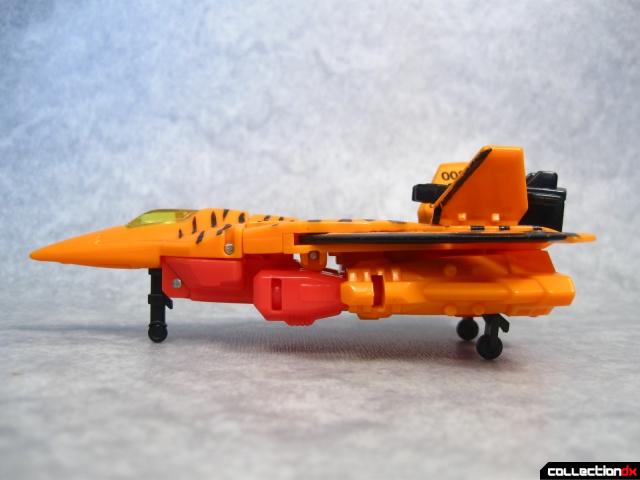 Hooligan has a full set of retractable non-rolling landing gear which is a nice touch. 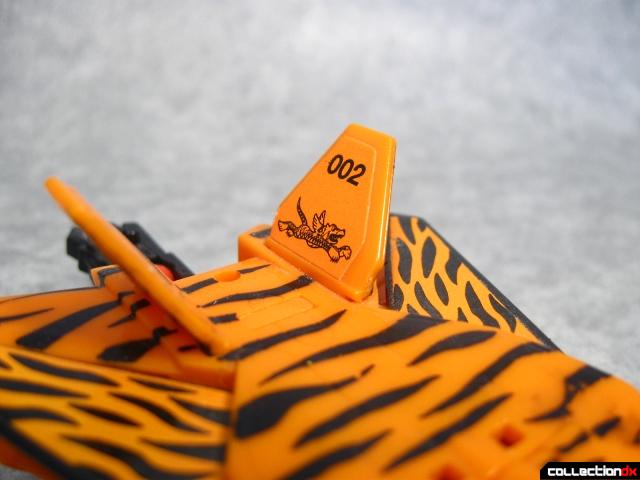 For a little more authenticity, Hooligan features a squadron insignia on his tailfins. 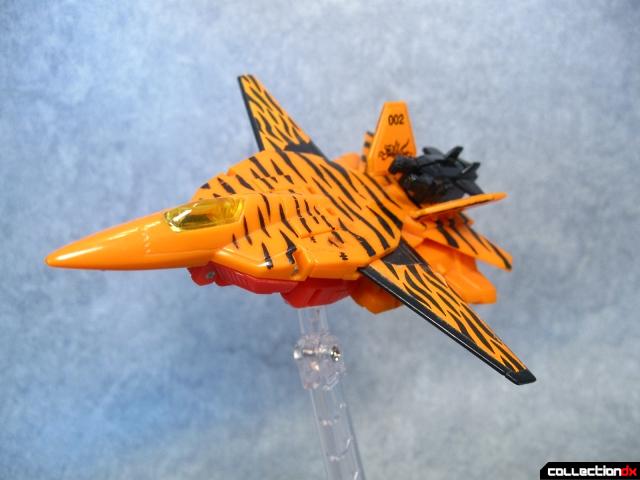 Hooligan is a great little jet fighter Transformer, especially for his era. 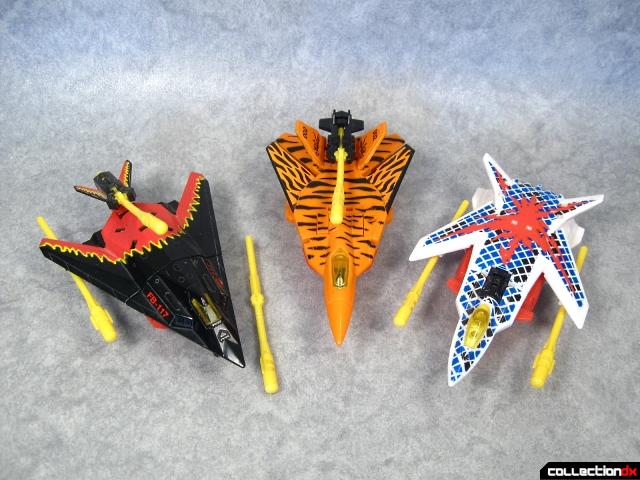 The three different types of Cyberjet come packed with two pressure launched missiles for their arm cannons. Oddly enough, Hooligan and his kin are the only Cyberjet that can only store one missile in fighter mode. The other two have hardpoints for mounting their slightly pliable projectiles. 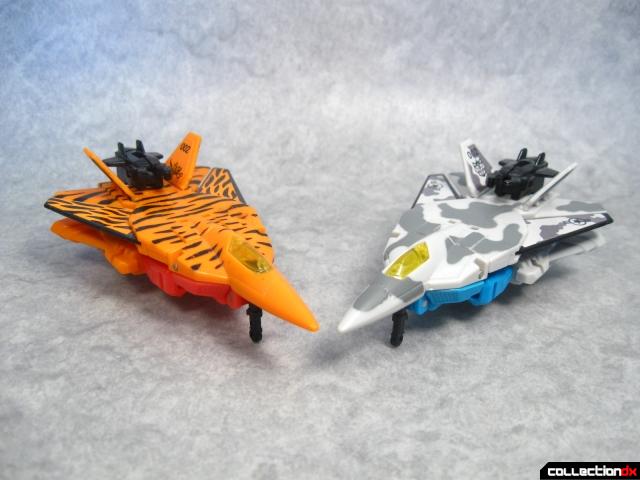 Hooligan was sold alongside his Autobot counterpart, Jetfire. While the gray urban camo fighter may not look a lot like his namesake at first glance, there is more to this homage than meets the eye. 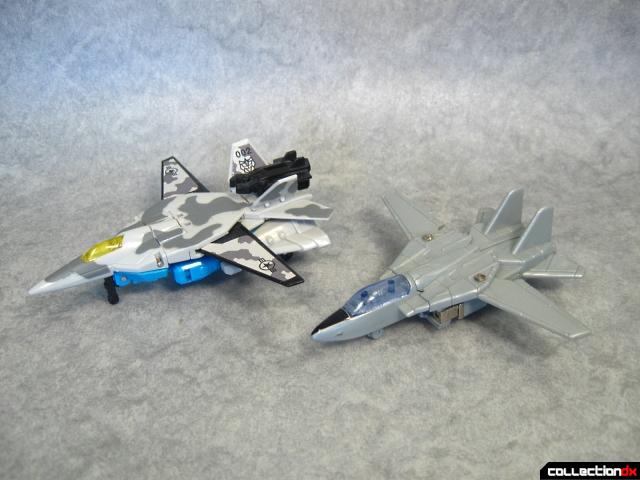 While looking at this Jetfire, I can't help but be reminded of another Bandai toy...

Also please try to ignore how the Autobot has a Generation 2 Deception logo on his tailfins. It makes me wonder if this deco was originally meant for the other faction. 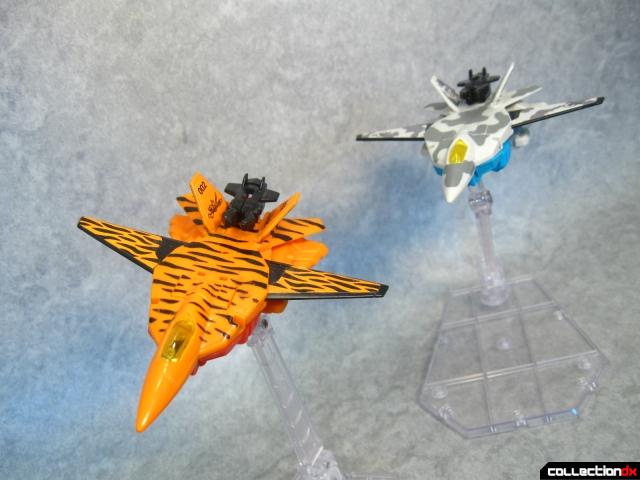 Hooligan is known for being a bit of a trickster who pranks on both the Autobots and his fellow Decepticons. 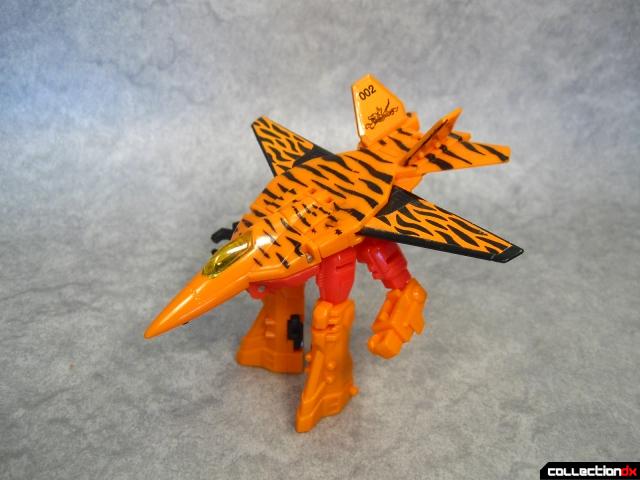 On the way to robot mode, Hooligan can easily become a Gerwalk in what seems like a very deliberate design choice. 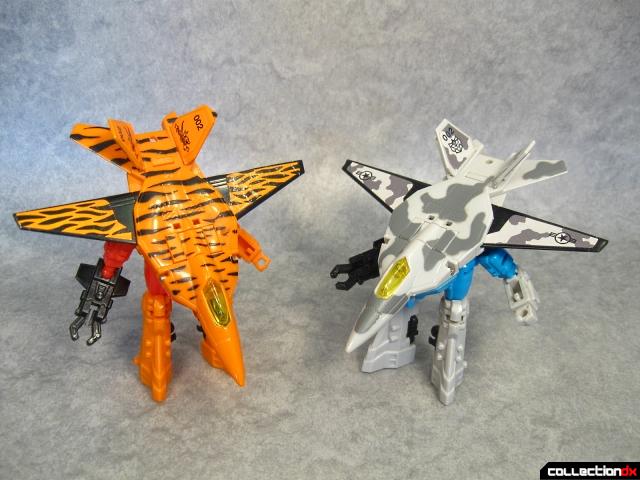 It makes the use of the name "Jetfire" make a whole lot more sense. 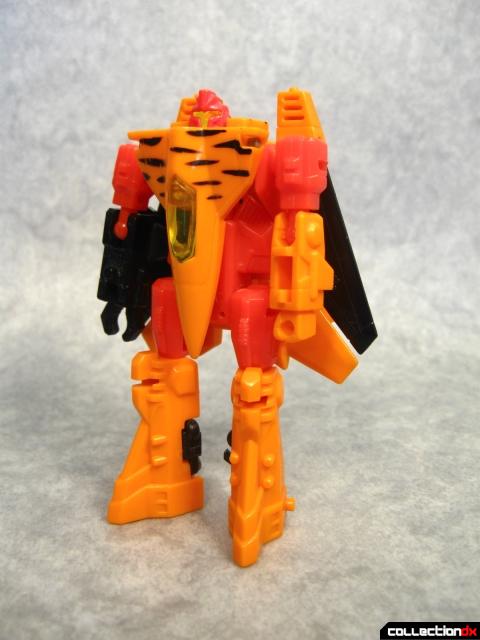 In full robot mode, the similarities to the classic VF-1 Valkyrie are a lot more apparent. From the prominent canopy on the chest to the pair of shoulder blocks on either side of the head, Hooligan and his ilk represented a way for Transformers to reintegrate the design of the original Jetfire while keeping both the people at Takara and Bandai happy. 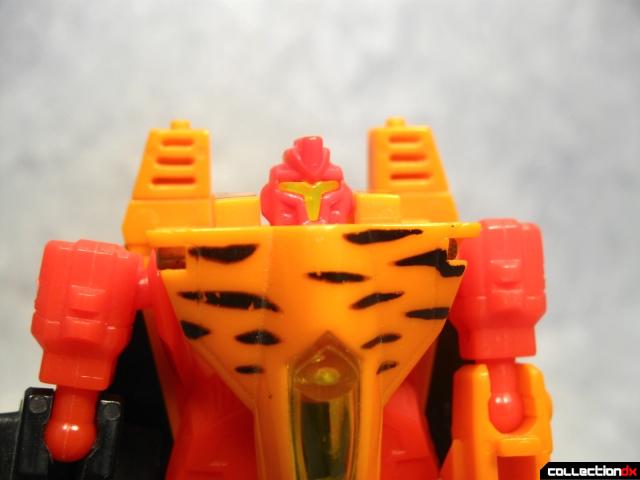 All of the Cyberjets have abstract faces designed to showcase the light piping gimmick. I always found their T-shaped visors to possess a fair bit of personality. 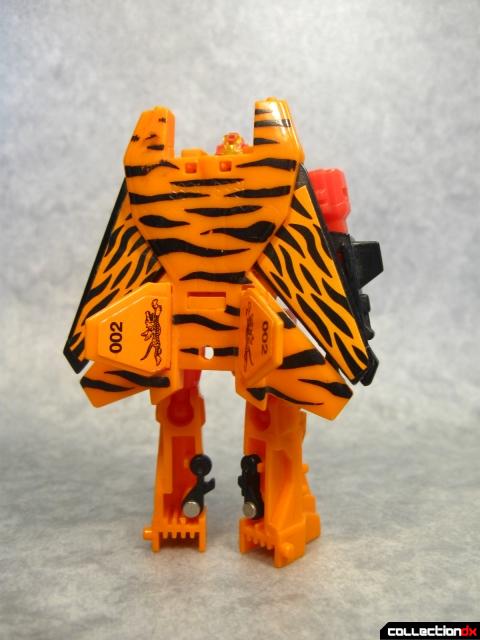 While is a bit simplified from the Valkyrie, there is still the undeniable pedigree of the "airplane folds in half" lineage. 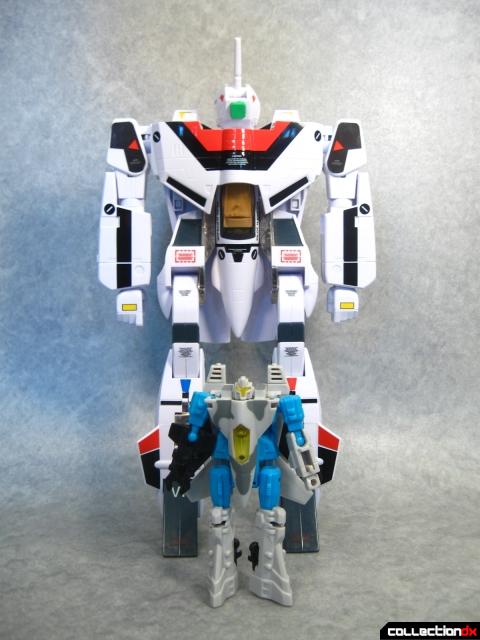 Of course this particular Cyberjet mold is a bit smaller than its once removed ancestor. Takara would eventually repaint the figure into Jetfire colors with the character of R-Blade from the short lived Robot Masters line. 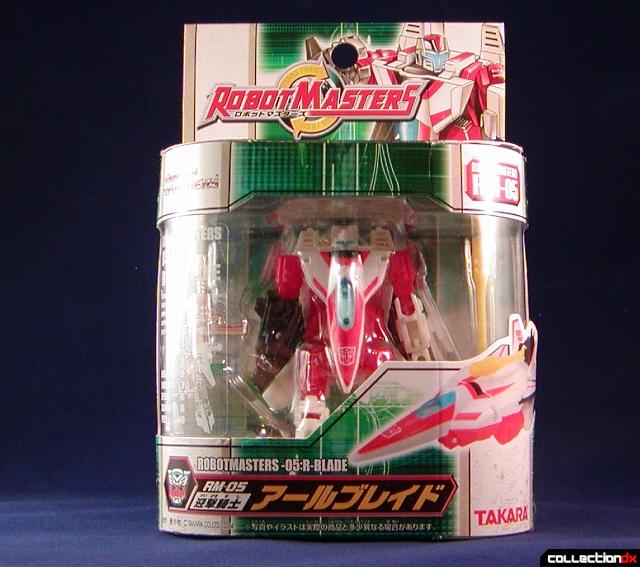 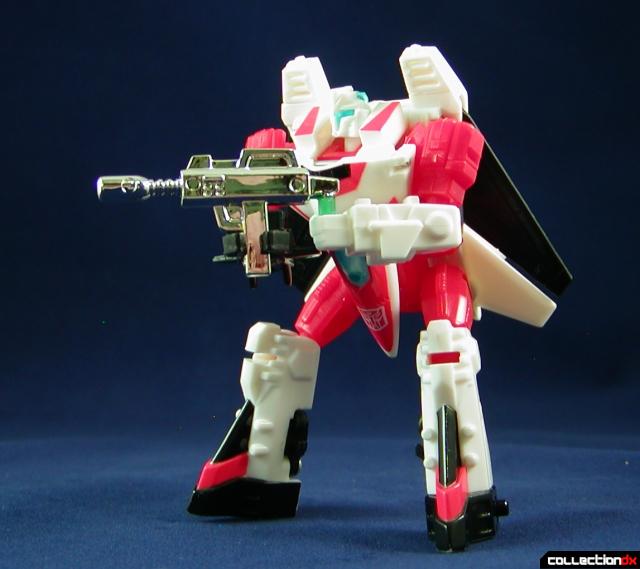 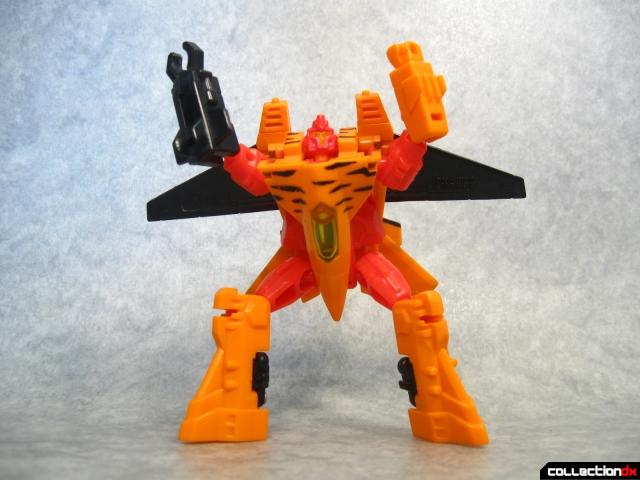 The Cyberjets use ball-joints for all their points of articulation. This allowed Takara to design toys that are both super poseable and durable as the joints can be popped apart without damaging the toy. 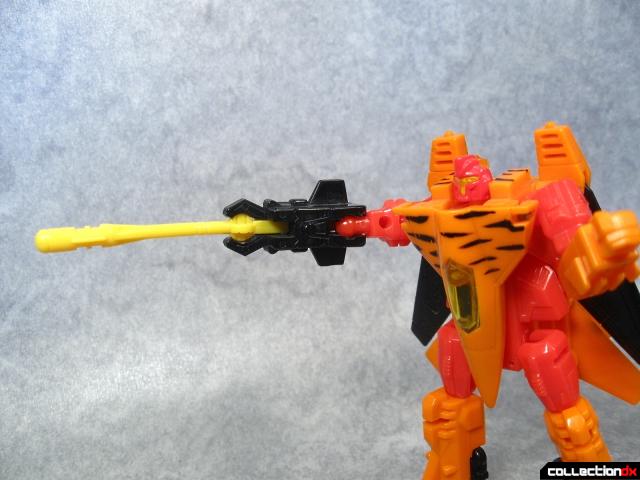 While they may not look it, the pressure launched missiles can easily fly clear across a room! Just push the back of the projectile through the claw-like mechanism to let loose some child safety approved pain. 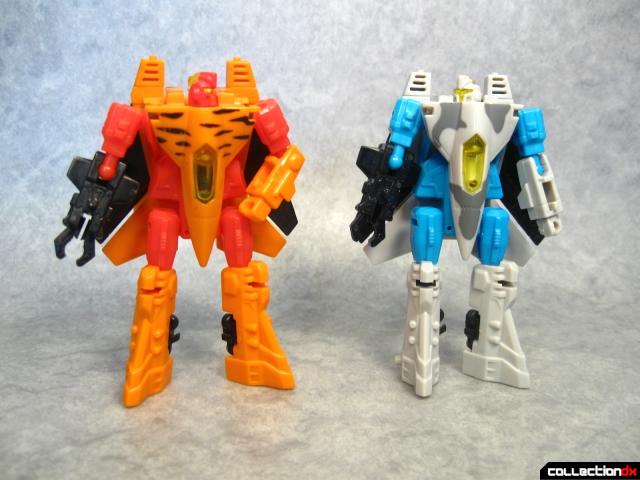 Both Hooligan and Jetfire have simple but effective color schemes that use contrasting colors to good effect. 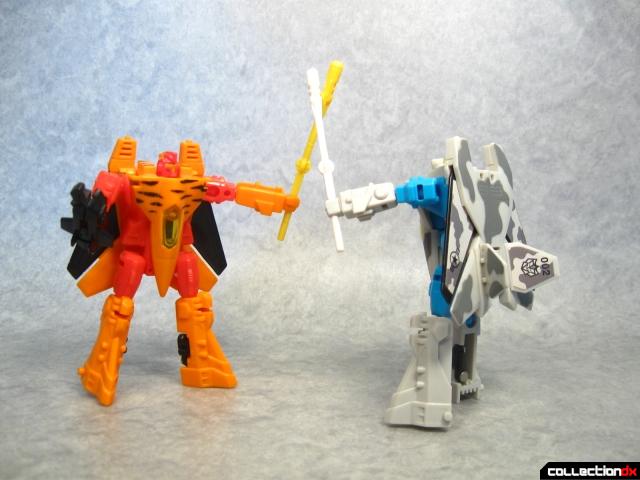 All of the Cyberjets can wield their missiles like whacking sticks. 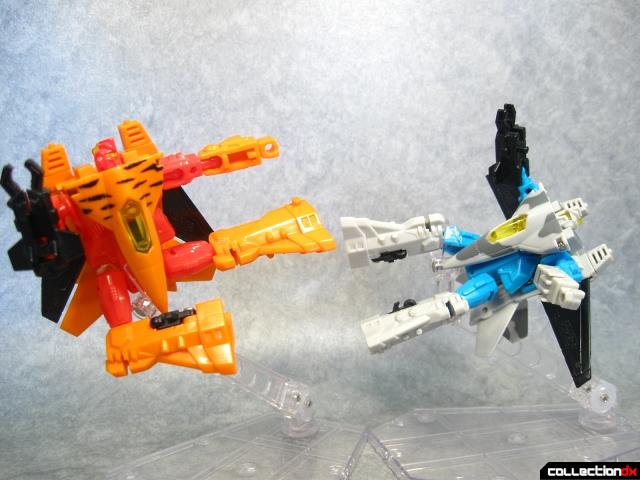 However Hooligan prefers a more direct method of inflicting pain. 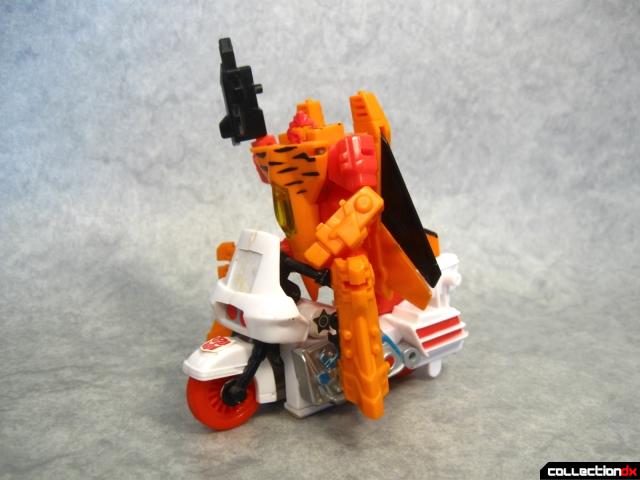 In the Japanese G-2 mini comics, Hooligan was shown riding around on fellow Decepticon, Road Pig. Here he'll have to make due with my bootleg Groove. 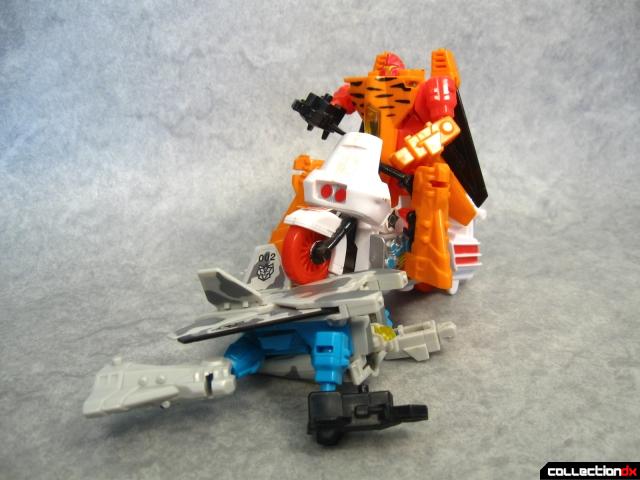 A hijacked Protectobot still does the job though. 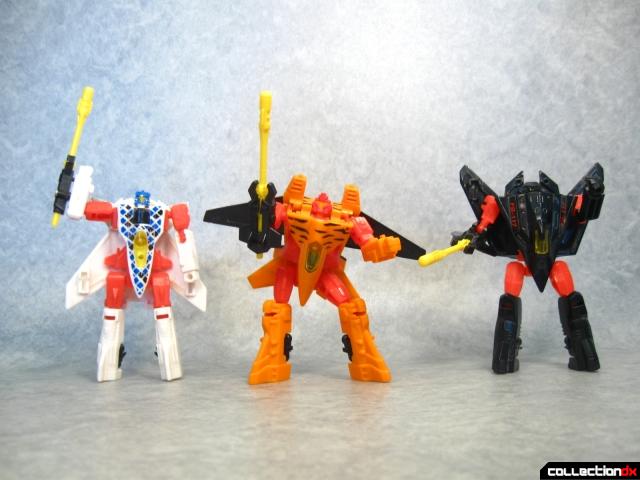 For the longest time I actually had no idea there even were Autobot Cyberjets. I picked up the three Decepticon ones at Spag's in Shrewsbury, Massachusetts. THE Spag's (as in there was only one) was a wonderfully weird place full of items from all walks of retail concentrated under one roof. It was the perfect place to stumble on some Transformers in the waning days of Generation 2. 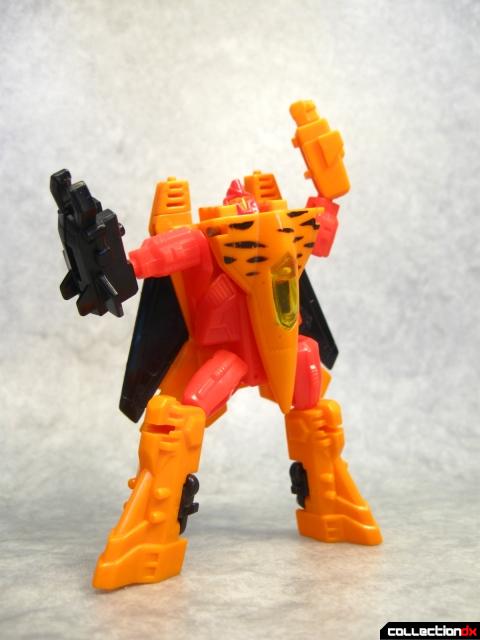 Out of the original Cyberjets, it's Hooligan who is the most fondly remember of the group. His solid engineering and loud tiger stripe deco makes for the perfect package of portable playtime fun. This mold has been repainted several times over the years (as well as bootlegged to hell and back) and is still one of the best jet Transformers ever made.

I can only hope that the upcoming Leader Class Jetfire will get a Hooligan repaint. After all it would only be fitting for what appears to be the ultimate Cyberjet to respect its roots.

"I can only hope that the upcoming Leader Class Jetfire will get a Hooligan repaint."

Just watch them do another boring Darkwing based repaint.

You actually can store the extra missile on the Hooligan/Jetfire mold. The slots on the left forearm are the right size to plug the missile in using one of the four pressure-fire bumps. If you're very careful, you can get two missiles on there at a time.

I tried that but it didn't seem like the missiles wanted to fit in there smoothly.

This reminds me of the G.I. Joe Tiger Force toys. I always like this mould but never owned any version of it. It does seem to be a fun figure.

Also the prospect of a Hooligan (Tiger Force lol) repaint of the beautiful Generations Jetfire would be amazing.

Love the old Cyberjets! Hooligan was the only one I didn't get, but my friend had 'em. I've still got Skyjack and Space Case. I'd still like to track down Hooligan at some point....but heck, I want anything that uses these molds. Really would have like R-Blade, but I never tracked him down.

The same basic design is revisited with the Energon Starscream. I've always felt both it and the cyberjets were excellent toys.

I would say Energon Starscream is more based on G2 Smokescreen who is also quite excellent. They have the arm arm and torso transformation.

Thanks to Jeremy (Ginrai) for providing me with some pictures of R-Blade. I updated the review to include them.