The nineties were the period of my life after boyhood and before college. While I kept all of my G1 Transformers, toys were simply not part of my life for the better part of that decade. I’m not sure I missed much. The loathsome Beast Wars, of course. But Exo-Squad was pretty cool.

Exo-Squad was part of a mini-surge in American Mecha properties (well, if two series constitute a surge - Battletech was the other). Being that Exo-Squad is arguably the first, and best, American Mecha series, I’m surprised at how little attention it gets among robot fans. The later Robotech reissues get a certain amount of qualified love, but the original E-Frame molds are ignored. Which is a shame, because the original toys were solid, inventive, fun pieces.

The Exoconverting Aerial Attack E-Frame (whew) is one of the more elaborate releases. What caught my eye was the magical phrase “Aerial Attack E-Frame Transforms Into an All-Terrain Battle Cycle.” That’s it, my weakness (well, one of many). I will buy, and have bought, ANY transforming motorcycle placed in front of me. This one isn’t the best, but it’s not bad.

The box is a sturdy, conventional 90’s mass market package, complete with a nifty painting on the front and product shots on the back. 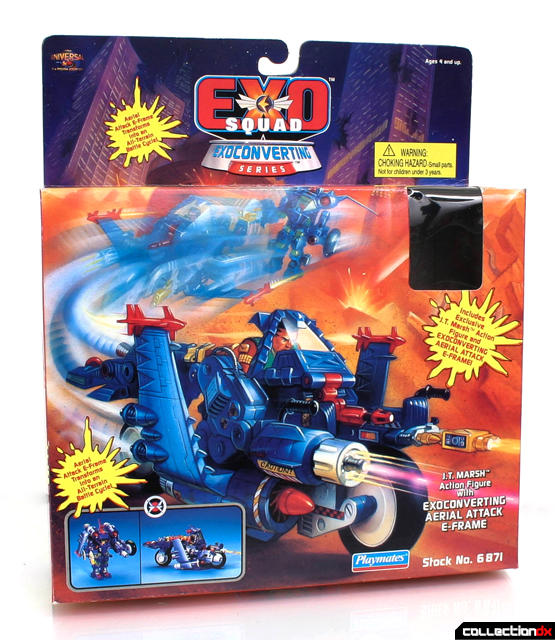 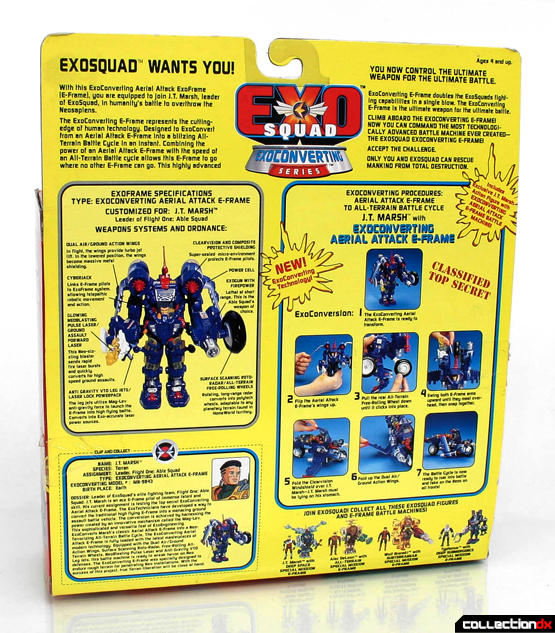 The mecha mode is a satisfying hunk of glossy plastic. Tons of details. Great painted finishes and decals. A nice amount of clear plastic. 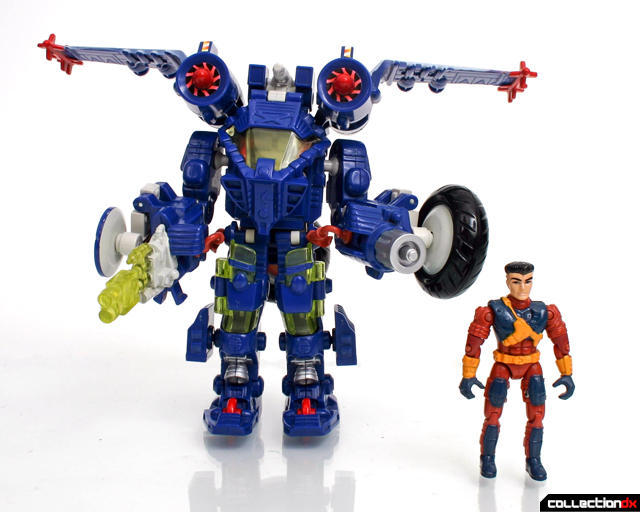 As on all of the E-Frames, the front of the machine unfolds to accept the pilot. There’s a cool bit which plugs into the back of his head, but it tends to make situating the pilot difficult so I leave it off. 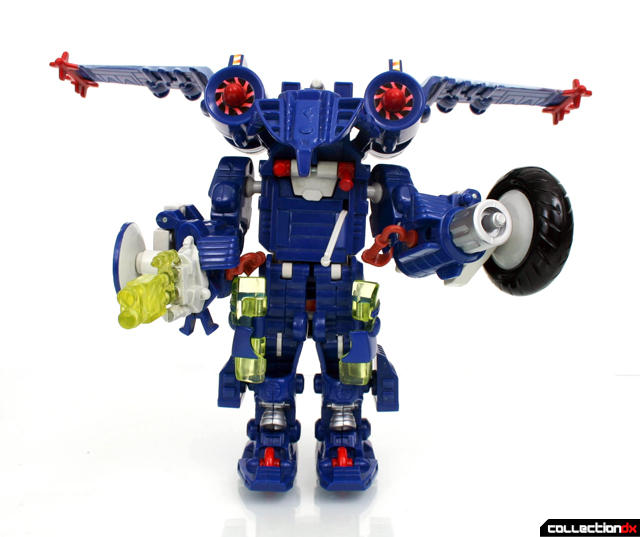 The pilot does have a funky mid-nineties, Vanilla Ice-tinged haircut. 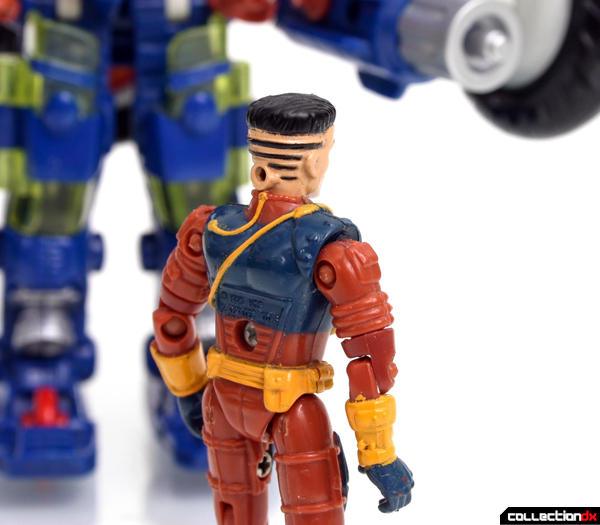 With our buddy J.T. Marsh behind the wheel, the toy comes together nicely. I do have one issue with the design, though: busy-ness. There’s a whole lot going on here. There’s no underlying philosophy to it, just a grab-bag of features: Wings! Wheels! Guns! Tubes! The mecha mode works on some level when you get used to it. The motorcycle mode, as we will see, suffers. 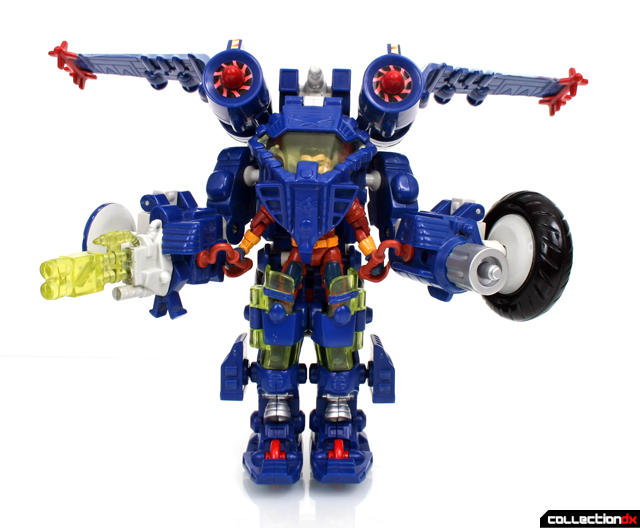 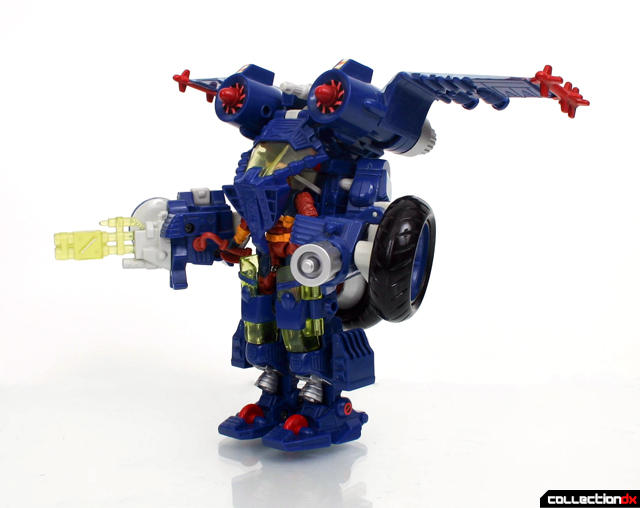 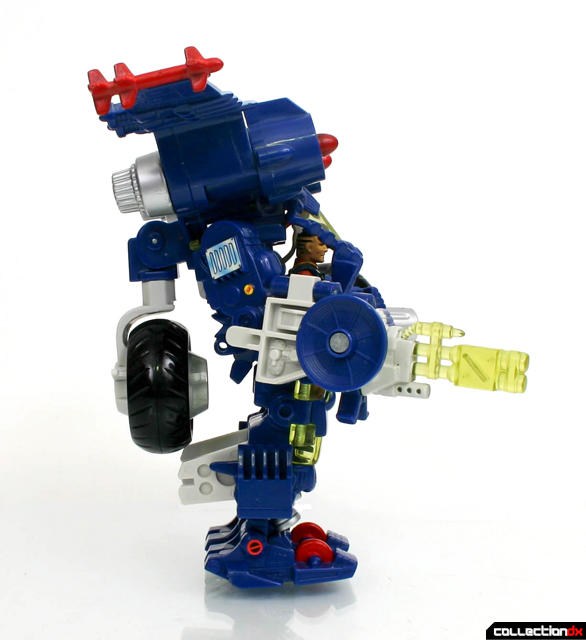 But it has grown on me. I like the back, which is reminiscent of my beloved Zillions Tri-Cycle. There is an ungainly, goofy charm about the thing. 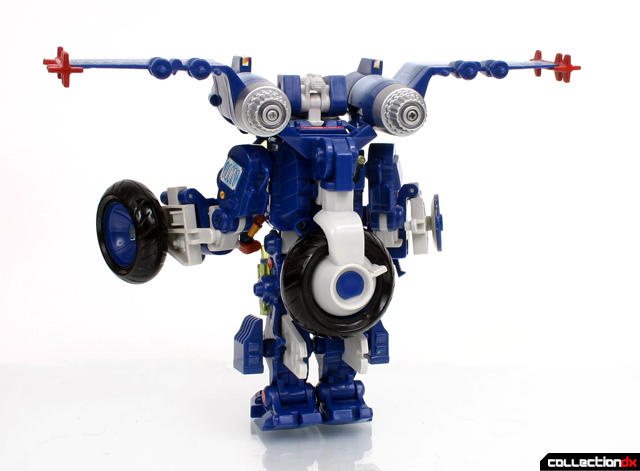 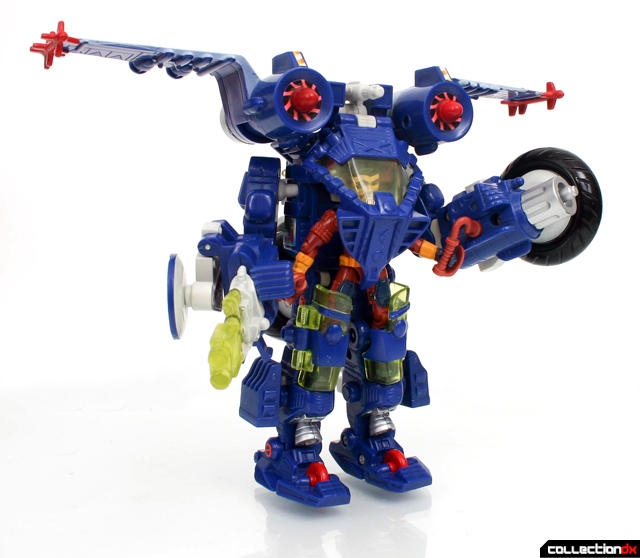 Transformation into the bike mode is fun and engaging. You rotate the wing assembly and rear wheel down. 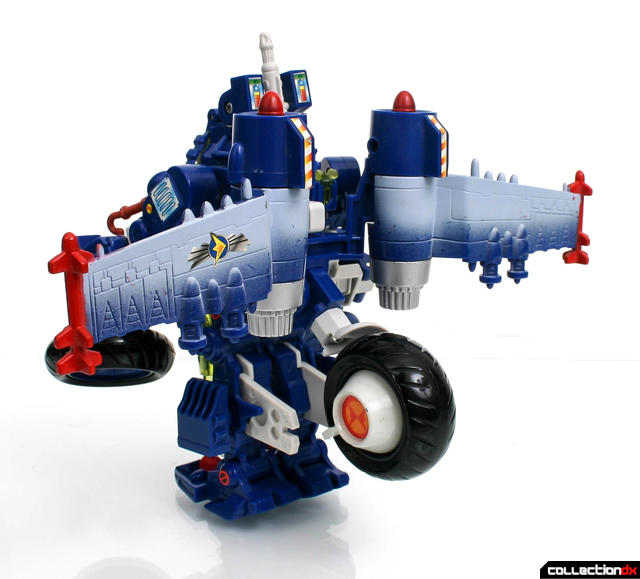 Then raise the arms and connect, straighten the feet. Flip over, align a few things and you’re good. J.T. fits back in the cockpit, this time on his belly. 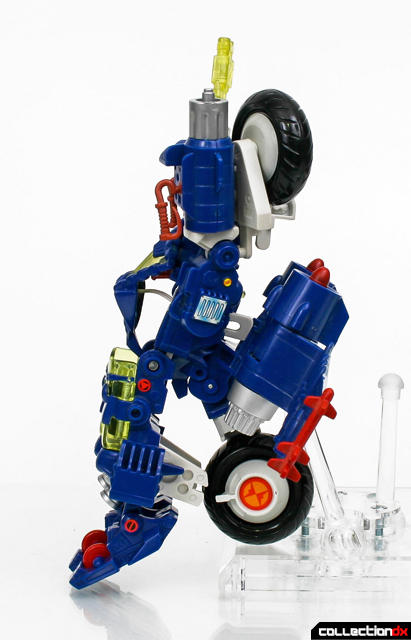 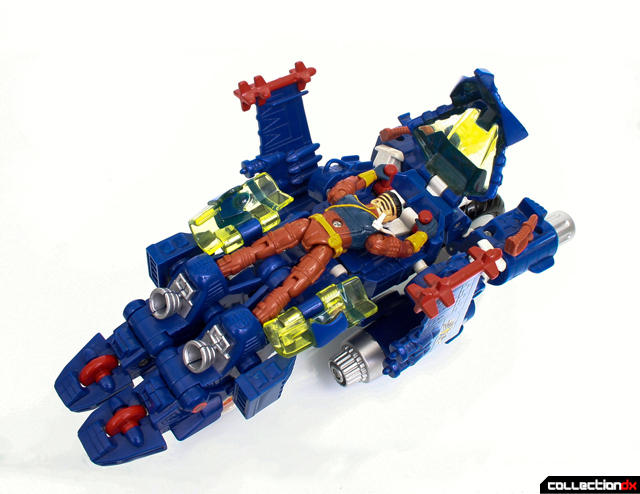 The motorcycle mode is disappointing. It’s fine, I guess, but not really motorcycle-like. The busy-ness of the figure really hurts the cohesiveness of the design. The wings are too much. 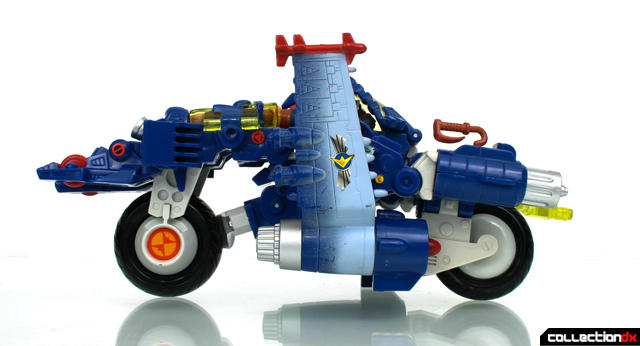 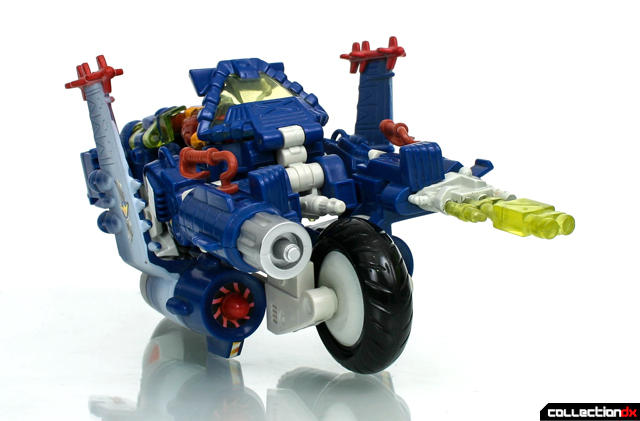 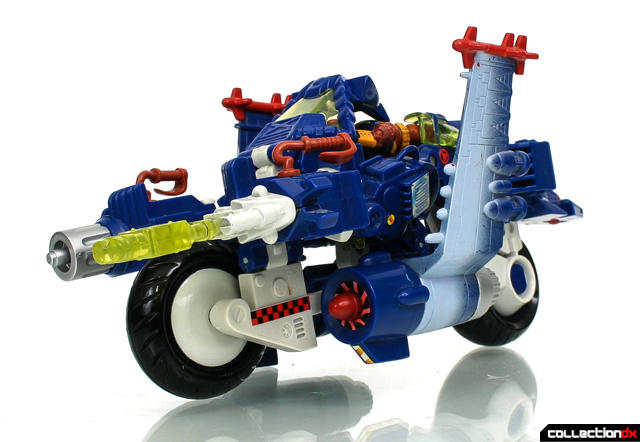 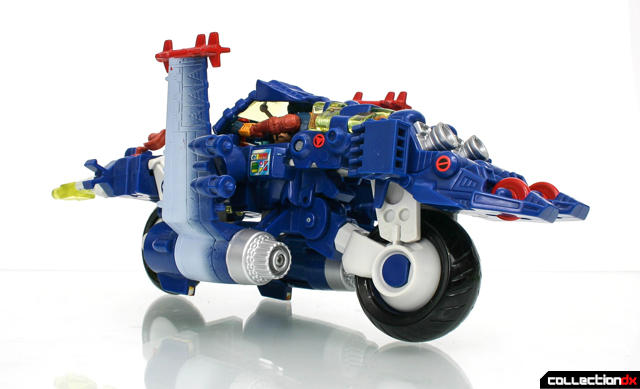 Folding the wings down does make an interesting flight mode though. 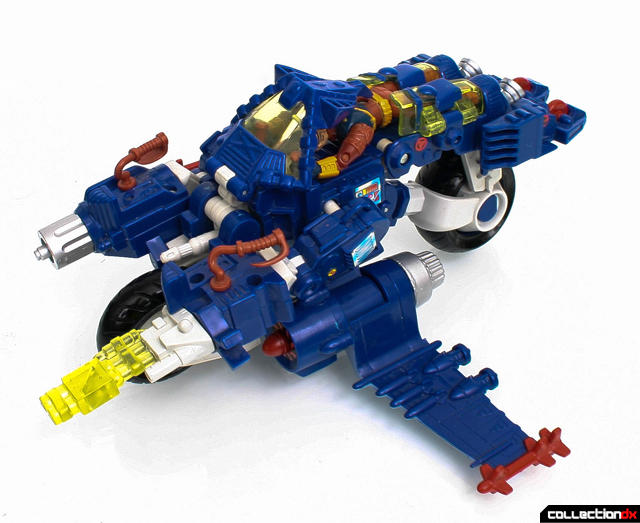 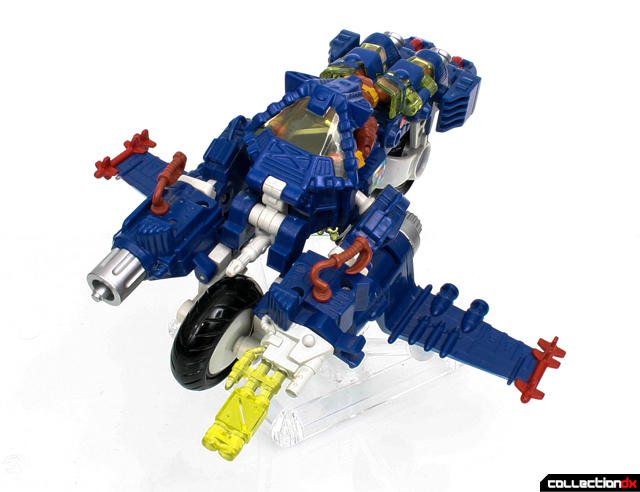 Altogether a satisfying, if flawed, piece. I have far lamer, uglier transforming bikes around.

The mecha deserves real props for being a respectable American design. He fits right in with some of my favorite mechs.

7 comments posted
Exosquad was an Event in

Exosquad was an Event in american toy history. What kid could not have fun with Marsala's E-frame?

It's worth noting that the suit design was taken from one of the first ExoSquad suits, which was non-transforming. It's actually pretty impressive how well they integrated the bike feature with the overall form of the original suit.

The Exo-Fighter shown there was designed by Parasites and Micronauts Alien designer Stephen Lee and is one of my favorites.

Man, Exo-Squad was friggin' awesome. That said: I only had ONE figure. I'm sad I never got completely into that toyline. On top of that, it's overall sad that another mech-based toyline has never taken hold since...

Why the hate on Beast Wars? Don't tell me you're one of those TRUKK NOT MUNKY people...

There are already many threads exploring, in exhaustive and testy detail, CDX's (or at least many of the contributors') antipathy towards BW. The short answer: not my cup of tea.

But what toyline are the two other Mech suits in the last picture from? They look rather nice.

Those would be a couple of Machine Robo Battle Hackers Risers.