In 1994 I was in an awkward period of transition. I really paid no attention to toys, or what was going on with the toy scene. I knew my kid brothers were into Power Rangers, and I knew they were Japanese, but I really didn't pay any attention to them. I was living on my own now, out of college, working 2 jobs and dealing with insane girlfriends; I had no time for toys.

I do remember seeing these toys in KayBee toy stores, specifically in the mall. I remember thinking how cool they looked, and I may have even gotten one for one of my brothers. But that was it.

5 years later I got back into toy collecting, and I was in that weird phase of just buying giant junk lots off of eBay just to bulk up my collection. Somehow I ended up with one of these, missing all the accessories.It was a neat figure, but as I got more serious about collecting, a lot of the "junk" got tossed and sold in lots on eBay (again!), this toy among them.

This year, I got a box from CollectionDX contributor Uplandmod. He had a box of "Junk" from his childhood and wanted to know if I wanted it. Hell yeah I did. It was full of treasure, and it kept me occupied for weeks. Most of it was candy toys and erasers, but included in the box was a complete Spectron figure with box. I finally have the chance to take a look at this thing with all its accessories. Now I am kicking myself for passing these up when they were on the shelves. 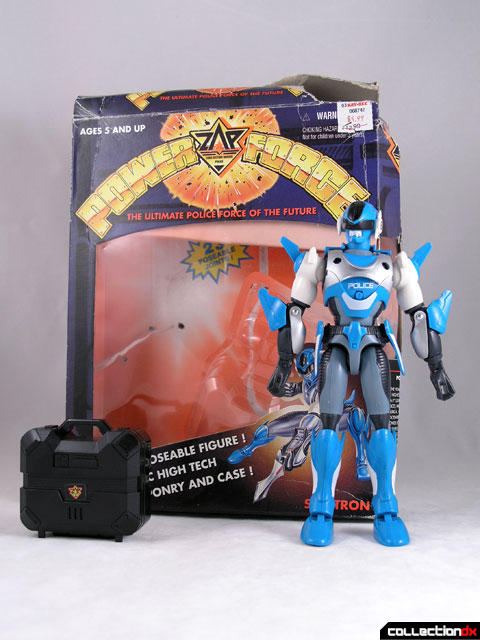 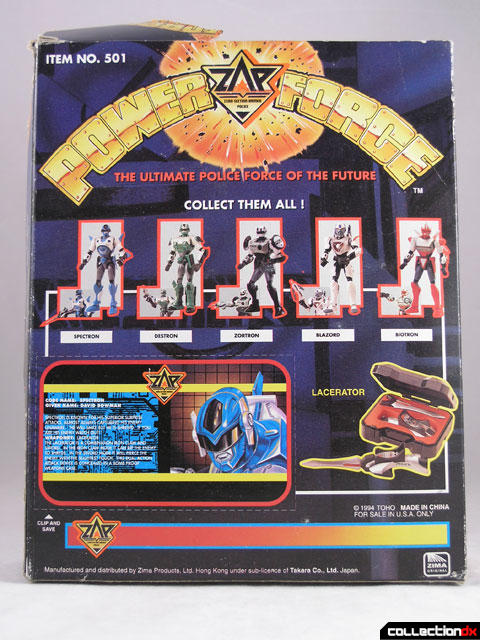 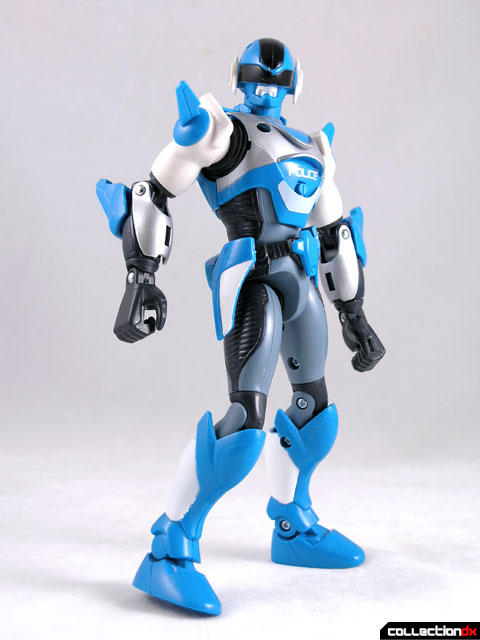 In Cyber Police Cybercop, the team are a member of the Zero Section Armed Constable (ZAC). The US version of the toy keeps the logo but changes it to Zero Section Armored Police (ZAC). 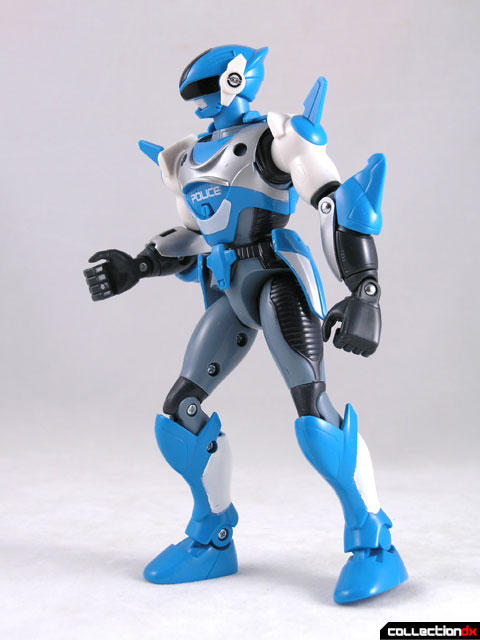 Spectron is 9" high and features 23 points of articulation. The toy is insanely articulated and the quality of the construction is awesome. The fact that these sold for only $10 is incredible. Spectron's body is made of ABS and PVC with diecast plates on the forearms. Several of the body plates on the figure are removable. 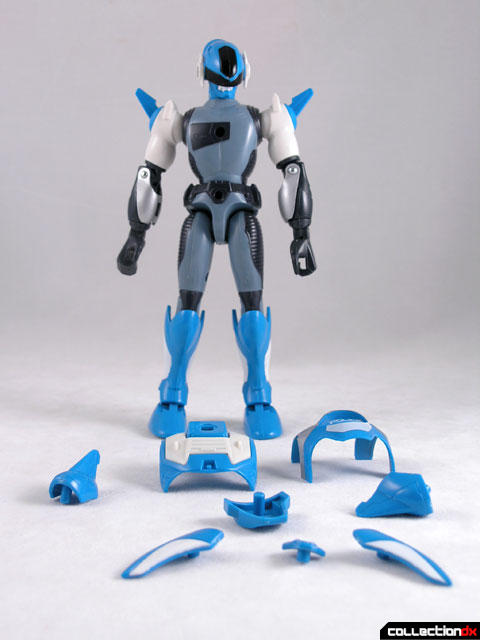 Spectron carries his weaponry in a black briefcase. Inside, 2 parts rest in a red plastic holder. The weapon is called the Lacerator, and consists of a giant hand-held blade. The weapon is designed to be integrated with the arm by lifting up the diecast panel on the arm and sliding the weapon under. Once connected, the weapon becomes part of the figure. 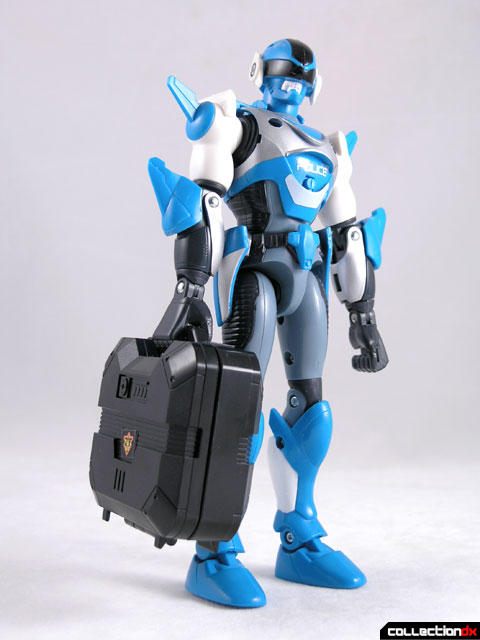 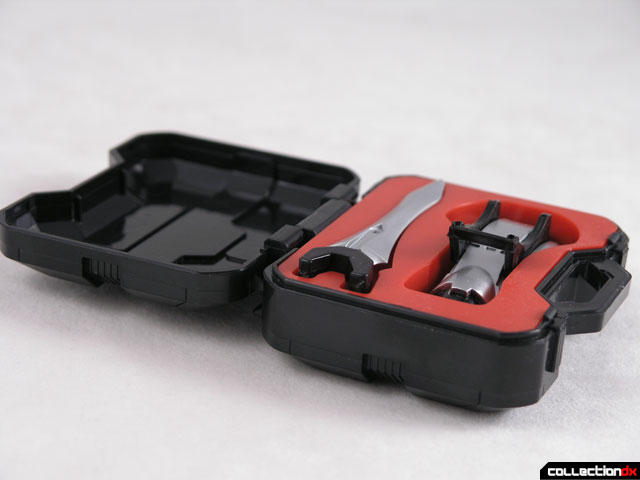 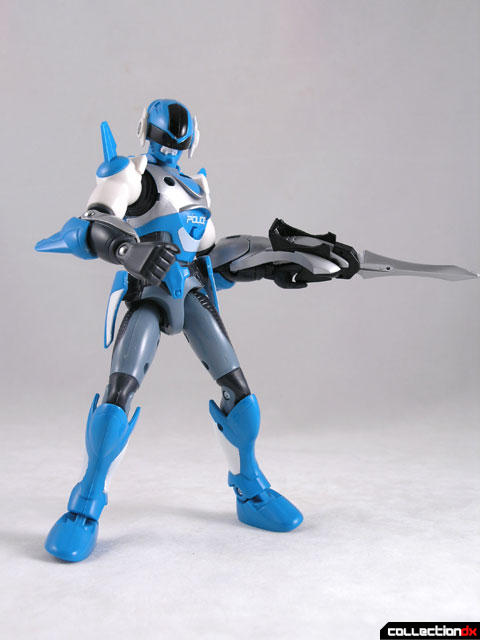 As great as these toys were, the show was terrible.

Cyber Police Cybercop was about a team of armored police, each with a different specialty. Inside Mercury Bit is a man named Osamu Saionzi - an expert grappler. The Mercury Bit suit has Superior high-speed mobility, but its armor is weak in the rear. The show never made it to the US, and by watching the video clip you can understand why. The production values are terrible, and even in the US tokusatsu frenzy of the 90s (Power Rangers, Masked Rider, Beetleborgs, VR Troopers) nobody would touch it. 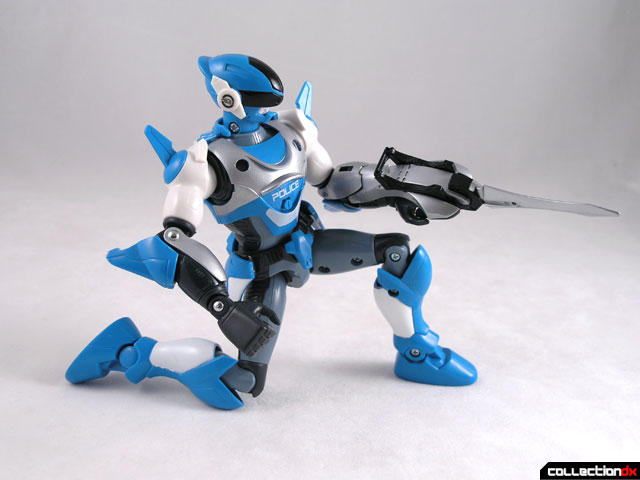 Still, its a great toy, if you can find one, pick it up.

4 comments posted
Had one of these...

Yes, these were great. Got mine at a Kay-Bee clearance as well. I had Blazord, who looked amazing. Sadly, I think I got rid of mine in the great toy-culling of 98, i.e. getting married and moving out of the folks house. Sad news, but cool to see someone else know these too.

We also got ours at kaybee for I think something like $3.99 (that was a long time ago and I really can't remember but We got all four on the same day so I think they had to be a good deal for my parents to get all four).

I remember being amazed at these toys, we lost all the parts and accesories but the figures stood the test of time and were pretty durable. I don't know how we lost them or what happened to them but I loved these toys and it was because of these figures that I started to really look for better made and articulated toys.

I don't have the packaging so I thought it would be tough to find out where these figures were from. I saw the trademark on the figures and decided to look them up, that brought me here. I have Zortron(black), Blazord(gray), and Biotron(red). Agreed, these were great toys and so cheap at Kay Bee I couldn't pass them up. I did make some choppy stop-motion with Blazord a while back with my friend but it's all on VHS.

I picked up a bunch of these guys back when I started seriously getting into collecting toys, in September of 1994. I was working at an office in the upper floors of the Manhattan Mall and on the first floor they had a Kay-Bee toy shop. I believe they were around $8.99 when they were first on sale, but they steadily came down in price..maybe $6.99 and, as akd mentions above, eventually $3.99 each. They even had some deals of 2 for 1 or something like that..basically insanely cheap for the beautiful figures they were. At first I was turned off by the cheasy packaging, but once I picked one up and noticed the Takara logo on the back, I reaized they must have been from some Japanese TV show. I wound up picking up the full set, and then down the line, multiples of the set. I've got a couple of full loose sets (acutally one set picked up on Ebay) , plus most (not all!) of the figures boxed, including doubles of some. They're all packed in boxes in my basement! I still look on Ebay for them from time to time! I'd love to get the figures in their Japanese boxes one day! On a recent trip to Japan, I saw the Blazord figure in a totally clear variant form.