Mega Man fans who grew up in the 1990's will always remember the Ruby Spears cartoon for its incredible cheesiness and copious amounts of Scott McNeil. As a voice actor, Scott McNeil is known for his incredible range that includes squeaky sounding sarcastic jerk to squeaky sounding gruff badasses. In the cartoon he primarily played both Dr. Wily and his right hand robot Proto Man. Despite the awesome premise inherited from the video games, the show was pretty banal with Dr. Wily coming up with dozens of completely inane schemes for world domination that somehow involved common cartoon cliches like a shrink ray, a mind swapping device, and a techno virus that made robots turn into neanderthals.

And let's not even talk about the one episode where they unearthed ancient lion men who try to take over the world by turning everyone into lion people. 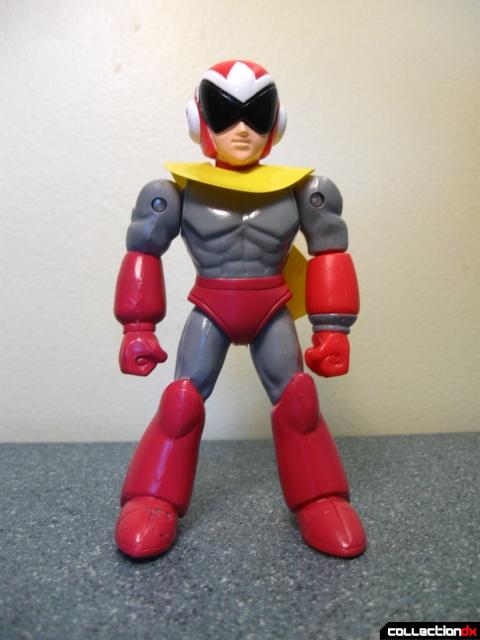 Regardless of the cartoon's dubious quality, it did have a decent line of toys accompanying it. Since Bandai's famous line of Mega Man model kits were half a world away, these cartoon based figures were decent substitutes for fans outside of Japan.

Proto Man was one of the front runners of the line and for whatever reason was my favorite character at the time. I think I just really liked his sweet shades and the fact he had red on him just like Optimus Prime. This figure stands about five inches tall and is made from thick ABS and PVC plastic. Overall it's a decent looking representation of the weird Americanized design from the cartoon.

You may notice a few teeth marks on Proto Man's right foot. It's a testament to the durability of these figures that Proto Man was able to survive a chance encounter with my old dog. He always reminded me never to leave my toys on the floor. 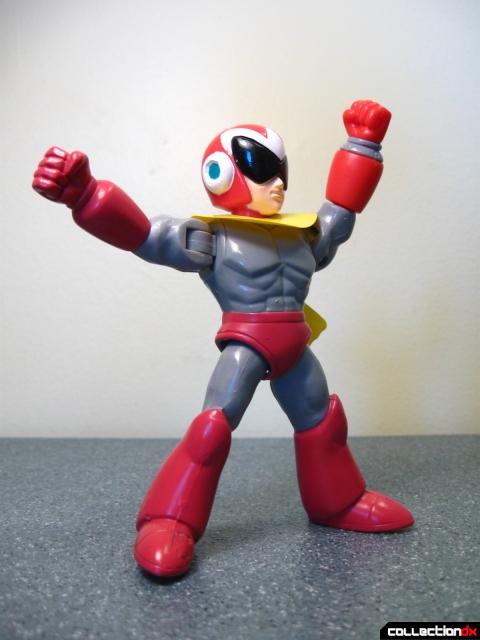 Like most figures from this line, Proto Man has minimal articulation. The best he has to offer is shoulders with universal joints. His head barely moves left or right and his legs can wiggle around at bit thanks to ball-jointed hips. Proto Man is a little top heavy so most he can manage is some slightly askew standing poses. 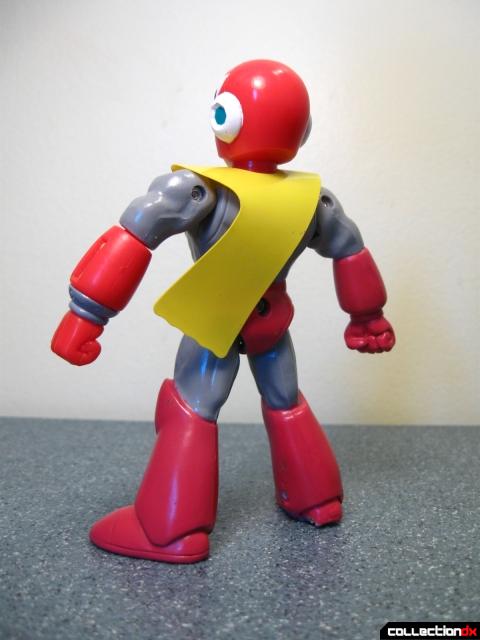 I do appreciate how Proto Man's signature scarf is a separate piece made from a thin vinyl like material. It's kind of like Stickems if anyone remembers those. 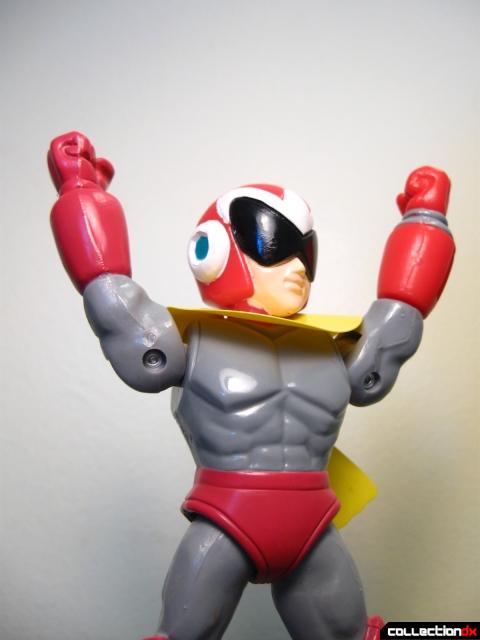 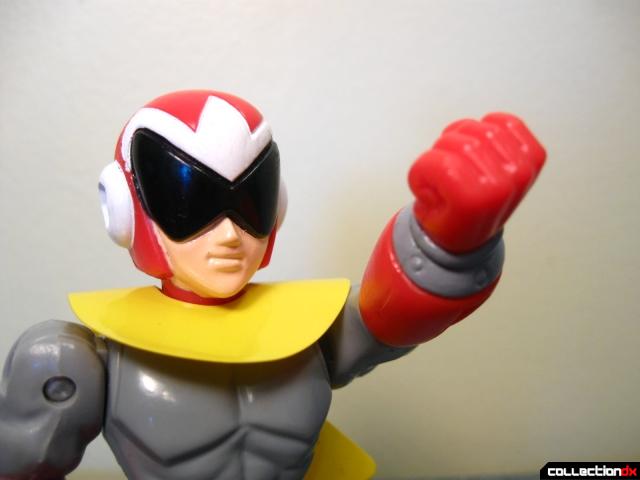 "I'm gonna get you Mega Man and your pesky dog too!"

You may have noticed that Proto Man's left arm is a slightly different color than his other red parts. All of the figures in the line had an arm swapping gimmick to allow Mega Man to steal the weapons from other robots like he did in the show. In the carton Mega Man would just touch another robot's arm to gain his weapon but on the toys you have to violently rend their forearms off at the elbow. Seriously that joint is super tight to this day! At the very least it gives Proto Man a little extra arm articulation so he can shake his fists at things. 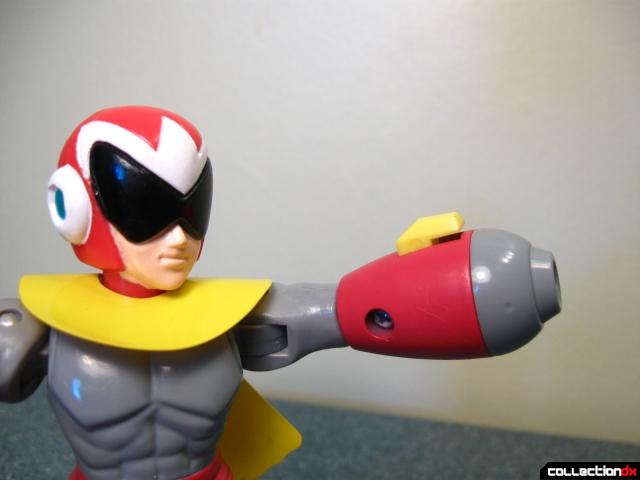 As the older brother of Mega Man, Proto Man also has an arm cannon. It's a decent looking accessory that is compatible with all the projectiles included with the other figures. The figure did not come with Proto Man's signature Gelgoog shield as he did not have it in the cartoon. In my mind, Proto Man just wasn't complete without his shield and I tried my darnedest to rectify this oversight so at the time I tried to make him a shield out of Lego with a bit of clay in the grip to secure it to his hand. Needless to say this barely worked but it did make me feel better. 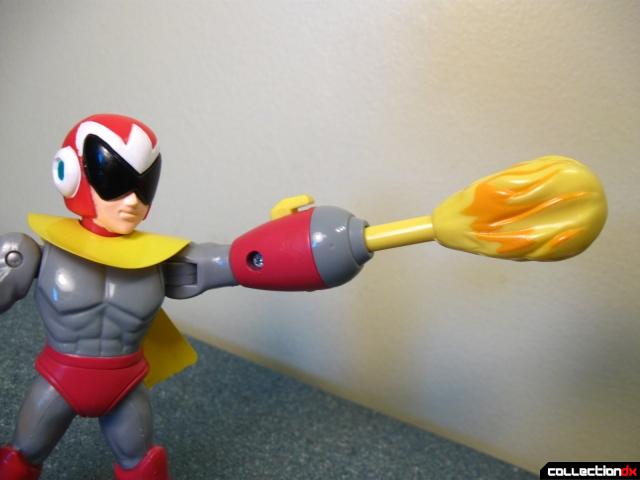 Proto Man's only other accessory is a dangerously cheesy plasma blast projectile. The arm cannon uses a simple pressure launcher to propel its payload an adequate distance. 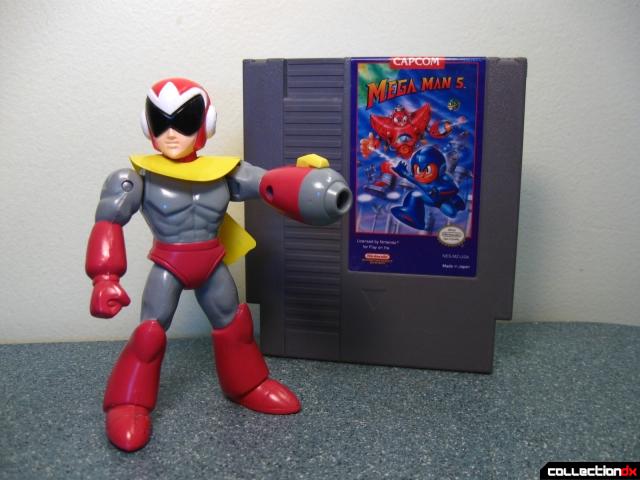 Oddly enough the cartoon's depiction of Proto Man seemed to stem entirely from the basic premise to Mega Man 5. In that game, Proto Man is seemingly behind a vicious army of eight mysterious robots that all live in appropriately themed levels. At the end of this taught thriller, it is revealed that Proto Man was framed by Dr. Wily who used his Dark Man robots to impersonate Mega Man's mysterious brother. In the cartoon, Proto Man was just evil and even fought alongside Dark Man at one point. I was so disappointed in Ruby Spears for not following the strict canon of the Mega Man universe. 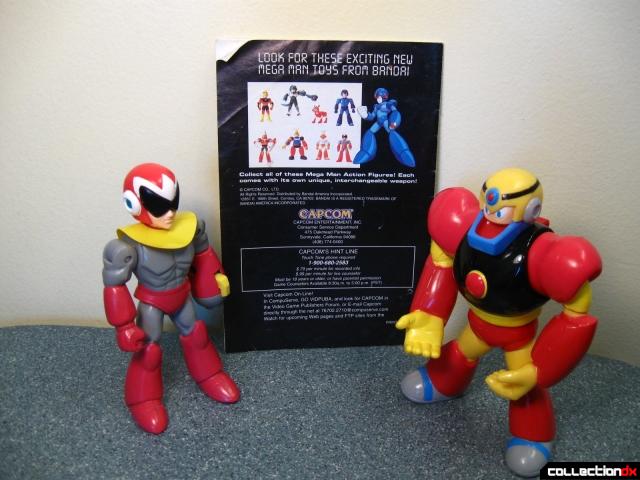 At the time, Capcom was really into cross-promoting the action figures on the back of Mega Man game manuals such as here on the back of Mega Man X2's instruction book. In fact, Capcom seemed really on board with the whole idea of adapting their video games into increasingly awkward syndicated cartoons. It took a downright terrible Darkstalkers cartoon to finally convince someone that maybe a game needed to remain a game. 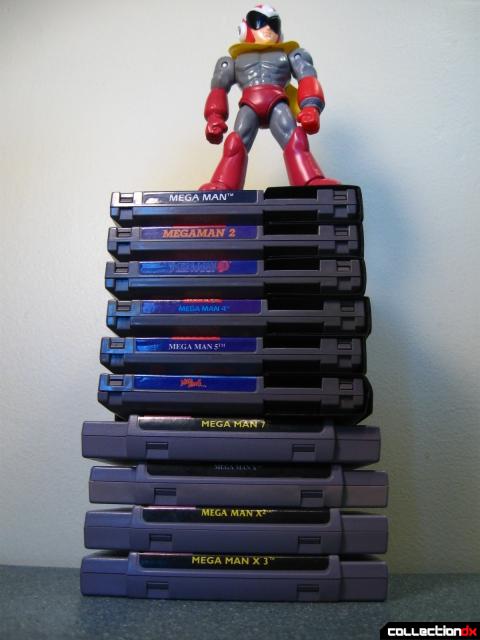 In the end Capcom's bid for animation domination came to a close and was mostly forgotten as the video games continued to stand the test of time. I find the cartoon based action figures to be a decent curiosity for fans of the games as they are simple and durable kids toys that offer some decent play value. At the very least I can always look at my Proto Man toy and hear Scott McNeil's voice in my head as I think back to my youth of watching Ken from the Street Fighter Cartoon, or Rattrap from Beast Wars, or Jimmy Lee from the Double Dragon Cartoon, or Duo from the Gundam Wing dub or... oh dear god get out of my head Scott McNeil!

Ah, the good old days, in which no Mega Man game cover or clip from the cartoon had the characters drawn quite the same... but they ALWAYS looked like people in spandex. Jeez, these figures really overdid it on the abdominals...

Even the Muv-Luv sexy time suits aren't as cut as Proto Man here.

Sometimes I still watch the Mega X episode to pass the time.

It's good to know there's a real hero protecting the future.

Instead of these, I had to made my own Mega Man guys by putting pen grips on the arms of G.I. Joes (my little actors...they played a lot of parts back in the day).

Nowadays these are pretty ugly, but the Robot Masters keep some of the charm, since they seem more accurate. At the very least, these beefed up versions of Mega Man and Proto Man were always hilarious.