It's hard to believe that we don't have any Superhuman Samurai Syber-Squad reviews yet on CollectionDX. It's one of my great toy-collecting regrets that I didn't grab all of these toys when they were on the shelves, but in 1994 the last thing on my mind was toy collecting. I was too busy going to college and attending grunge concerts at the time, but I did occasionally have to go to KB Toys to get Power Rangers for my brothers.

I remember seeing the show, and seeing the toys, and thinking they were a cheap Power Rangers wanna-be. It wasn't until years later that I came to have an appreciation for the designs.

Of course, Superhuman Samurai Syber-Squad wasn't just a Power Rangers clone, but no doubt it was picked up due to the show's popularity. Originally named Denkou Choujin Gridman (電光超人グリッドマン) the series aired in Japan from 1993 to 1994 and was made by the same folks behind Ultraman, Tsuburaya Productions. It followed the same premise as Power Rangers in that during it's import the actors and story were replaced but left original tokusatsu footage intact.

Playmates co-funded the series and imported the original Japanese toys into America with new packaging.

This particular toy, the Phormo Samurizing Set is an imported version of the Takara Combination Action King Gridman (アクション合体 キンググリッドマン) released in 1993 for 2980 yen. Aside from the packaging, there appears to be no difference from it's Japanese counterpart. 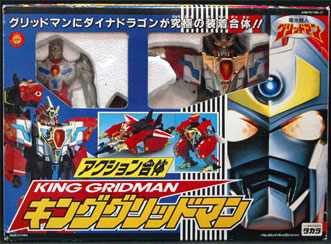 Note that this is a cheaper version than the more elaborate DX version. 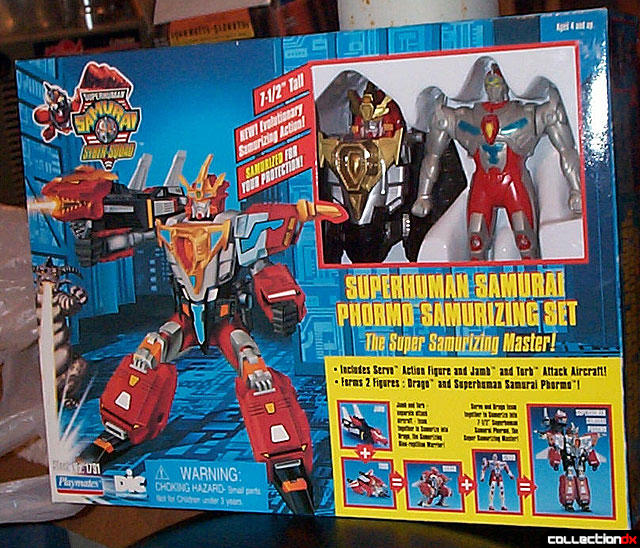 The toy consists of the main Figure (Servo) and two fighter vehicles (Jamb and Torb).

Servo is a basic action figure with 2 points of articulation. You'll see several holes on the figure which are connection points for the armor. 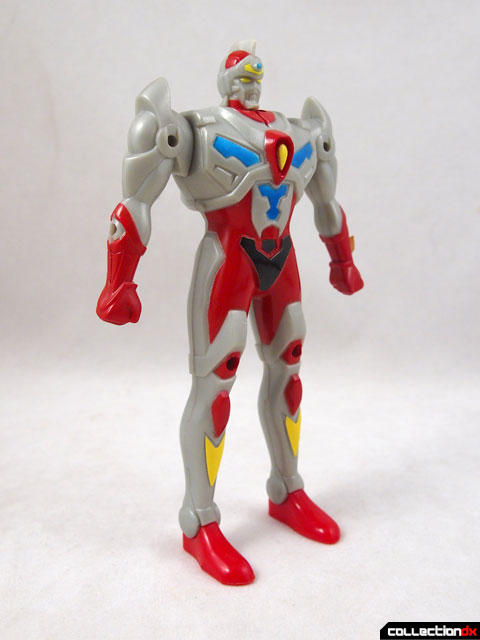 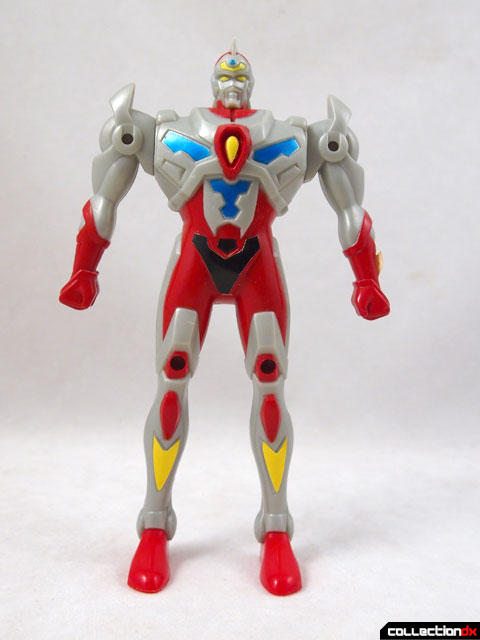 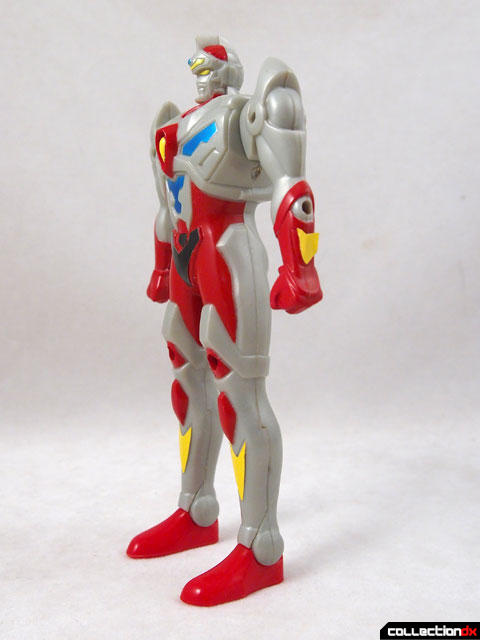 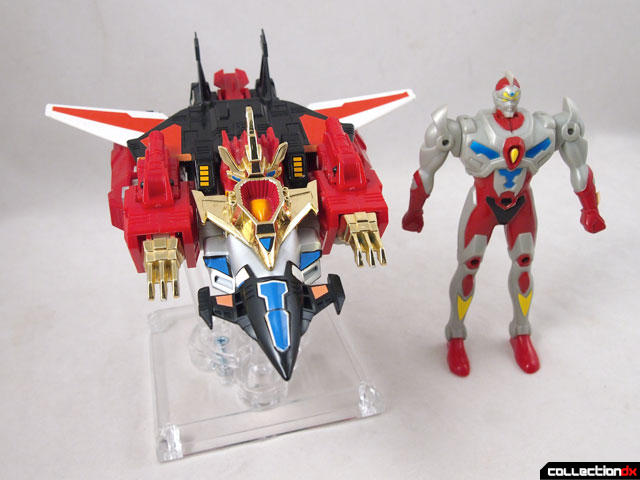 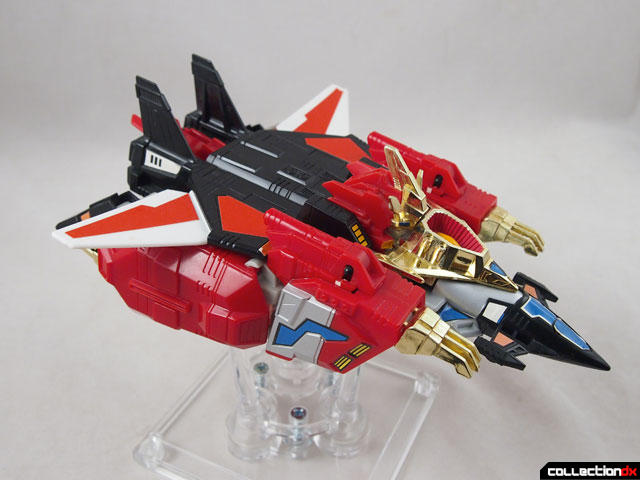 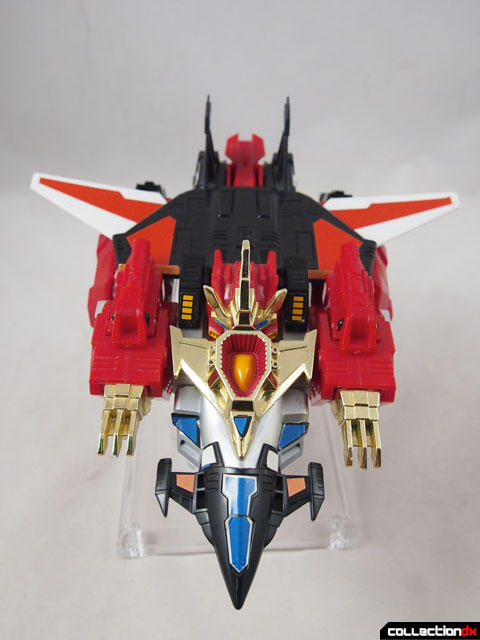 It's sort of awkward looking. But it's just an additional form. 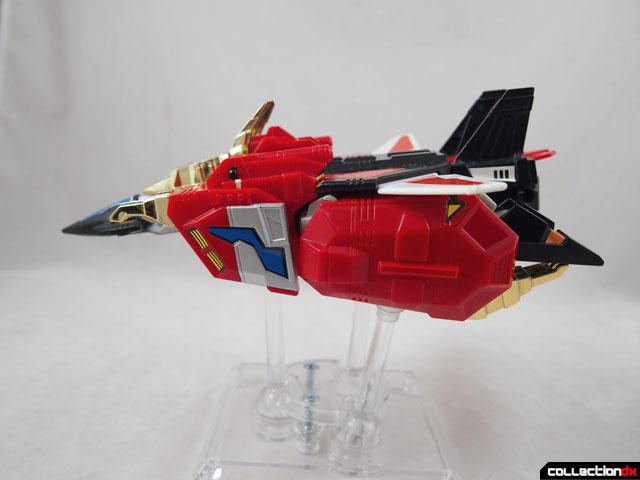 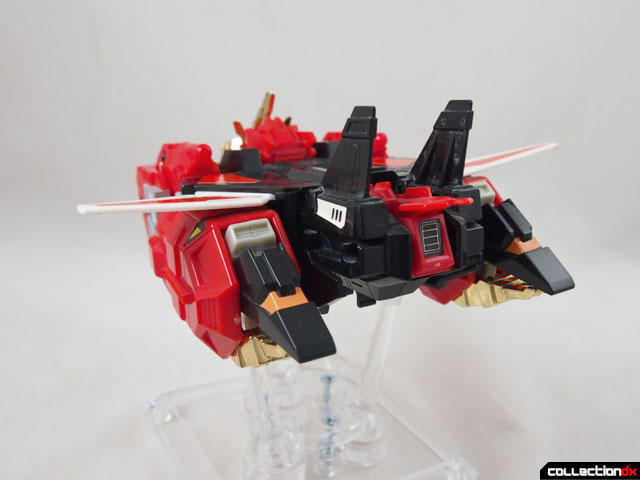 You can disassemble and reassemble him into Drago. 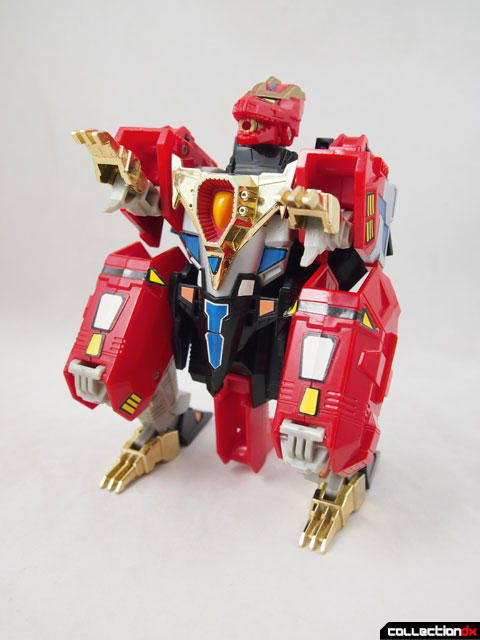 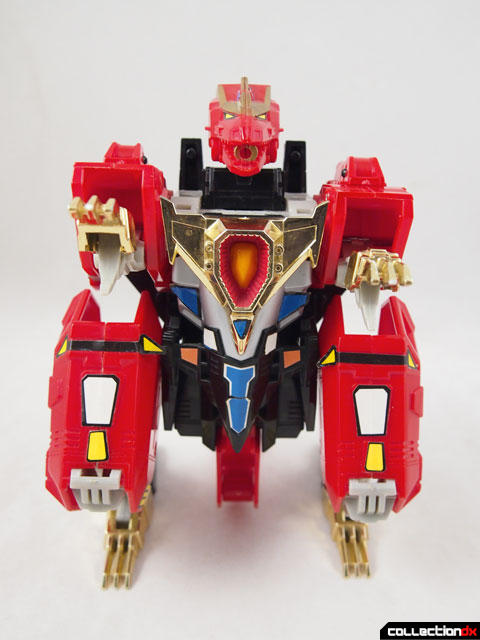 Drago is dopey looking, and the arms and legs are not that secure. 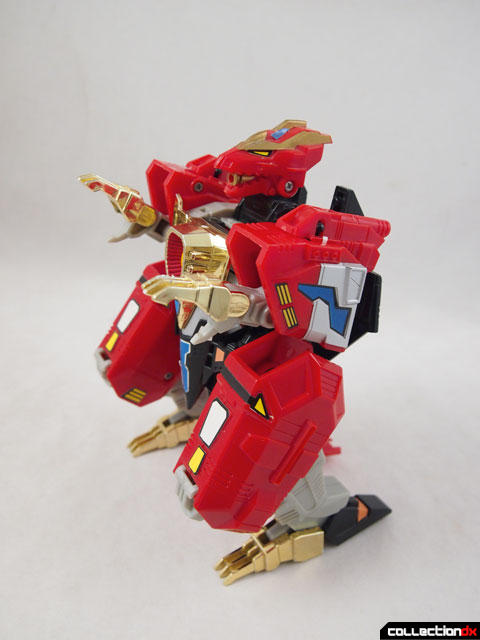 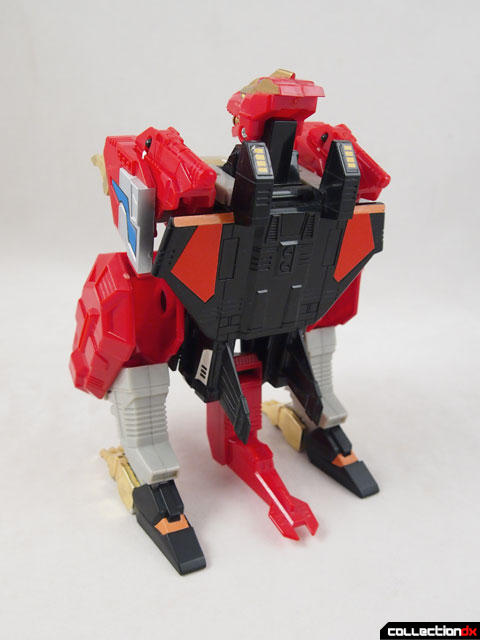 Take the whole thing apart, and you are ready to create Phormo. 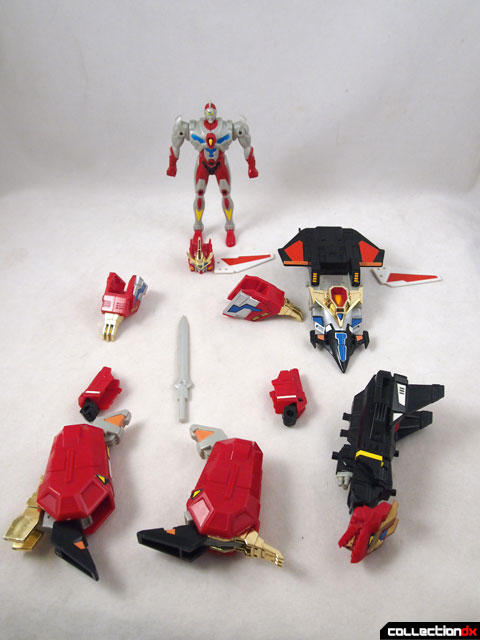 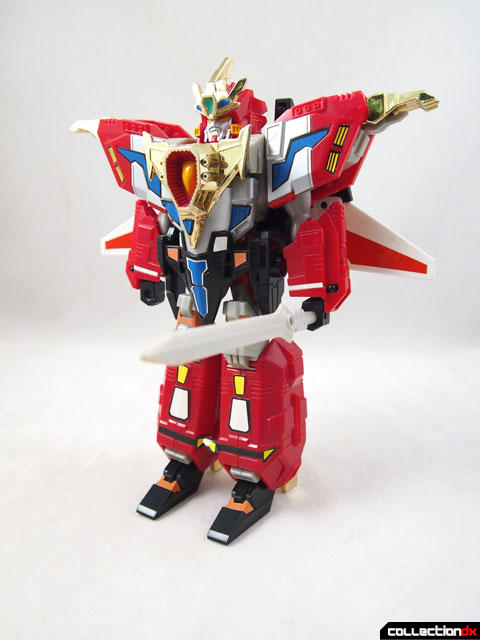 Phormo is pretty cool looking, but there's little to no articulation and armor parts barely stay on. It must have been frustrating to have this as a kid. I love the look though. The gold chrome is great and it's got nice blocky lines. 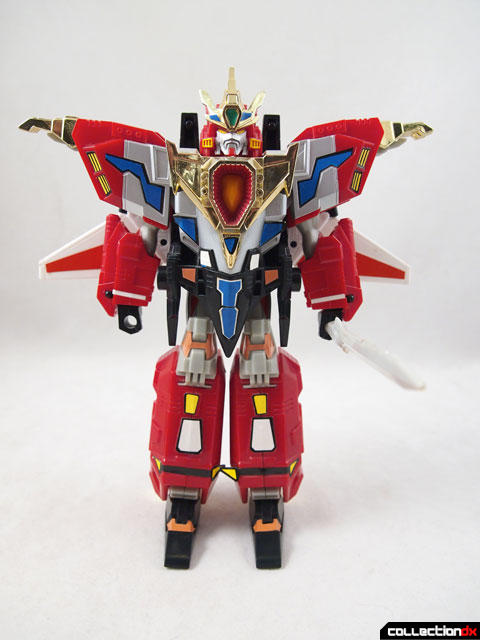 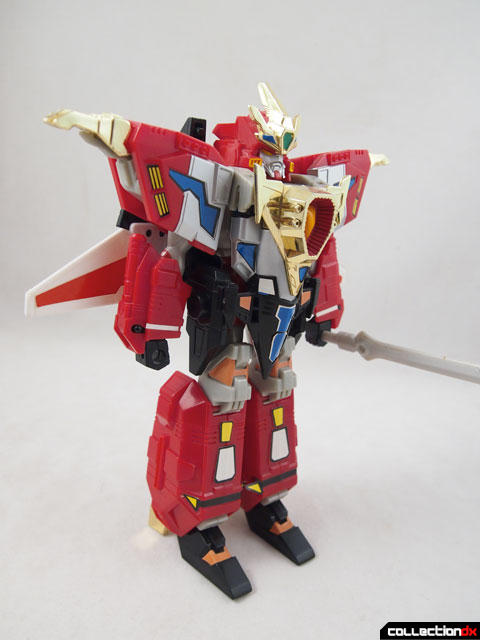 I'm not sure I have the wings right on the back of the figure. 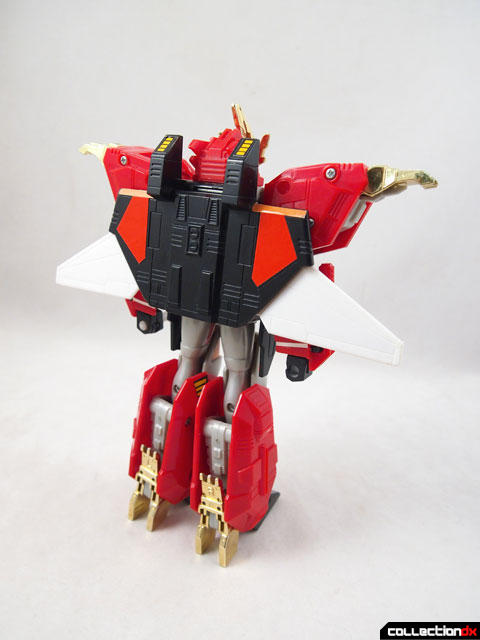 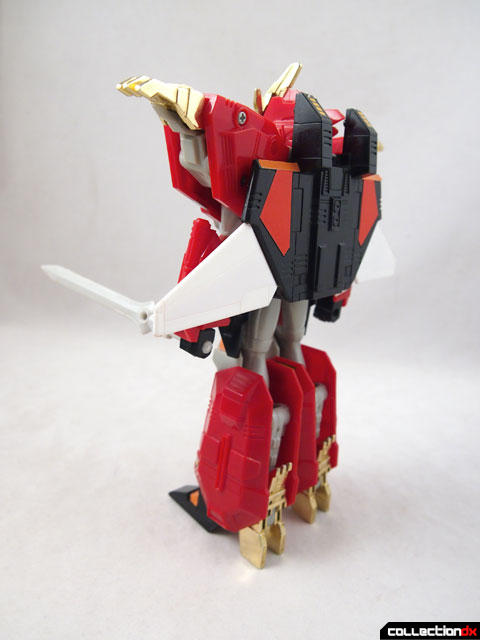 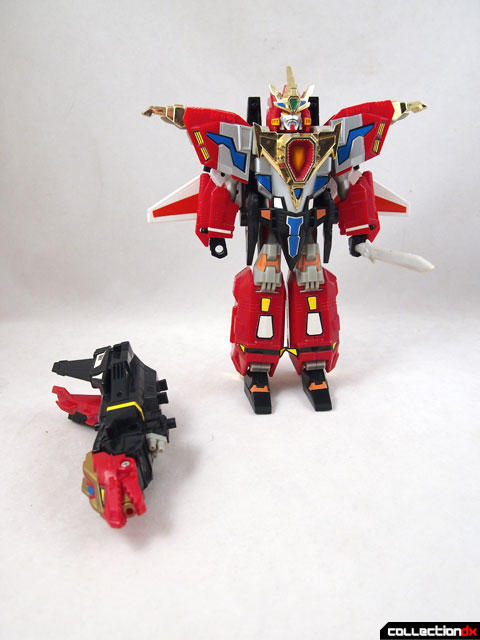 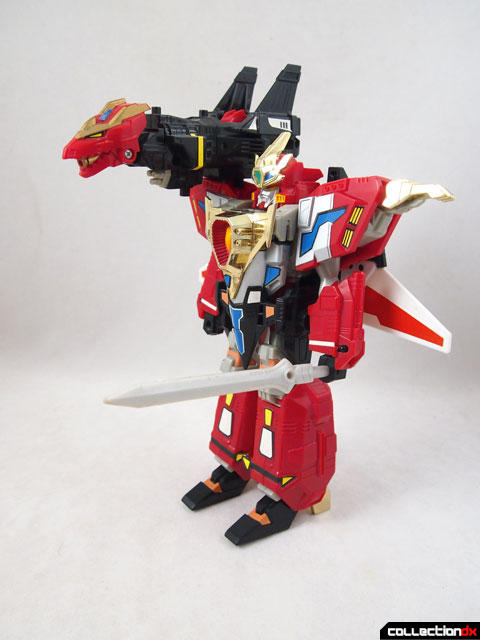 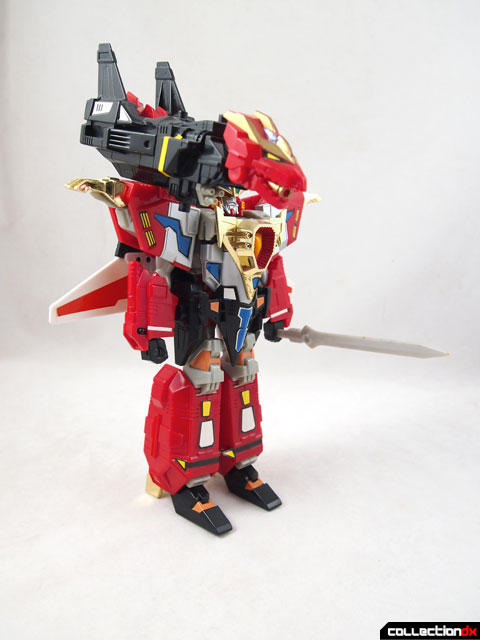 It's a cool looking set, but if you are looking to get a representation of this character into your collection, get either the DX version or the S.H.Figuarts version instead. Those realize the designs true potential.

I always really liked the designs from this show. I have to try and land at least one of the combined forms from the D-arts line sometime.

Agreed, these designs have stood up well over time.

I've actually thought a Super Sentai mecha line could be build around this- the Rangers pilot a single [transformable?] robot, and in order to make a standard [megazord], they would summon a vehicle-or-two which would wrap around the smaller robot to form the combo. Yes, it would be a variant on armor-swapping, but you could choose which vehicles to swap out- arms, torso, legs- to make different combos; kinda like "GaoRanger's" Power Animals line.

This thing brings back so many memories!

As a guy who loves giant monsters, this show was a refreshing look at things. They are not really giant per se as they shrink to fit inside the computer circuits.

God, I miss this show along with Tatooed Teenage Alien Fightes from Beverly Hills.

I use to LOVE this toy/toyline back in the 90's.

actually there is review of gridman on cdx...its in the ultra-act line..this armor set will also be released in the same line..but its an exclusive though.

Neato. I liked this smaller set due to it allowing it to transform into all the modes the DX can do (with simplifications of course). But all the forms look a little awkward. Didnt realise there was a japanese release since I've never seen it on yahoo..