You may (or may not) recall that when I did my review of the Bandai Five Robo Jumbo Machinder I mentioned that there was a Korean knockoff that I remembered seeing a long time ago on Yahoo Japan and later Josh confirmed it's existence with an old picture he had saved. Well, not too long ago I was lucky enough to acquire the piece in question. It was as I remembered, with the opening legs and action figures. But the toy had more surprises in store for me. But before we get to that, let's start with the box.

While similar in construction to the Bandai box (rigid cardboard with flaps on the top), I prefer the Korean box because it's got a nicer presentation of the toy. The Bandai box just shows the robot sort of falling out of frame, but the Korean box has a nice image of the entire robot standing upright. Meanwhile the sides of the box have clear images of the toy and the included action figures.

Korean on the left, Japanese on the right 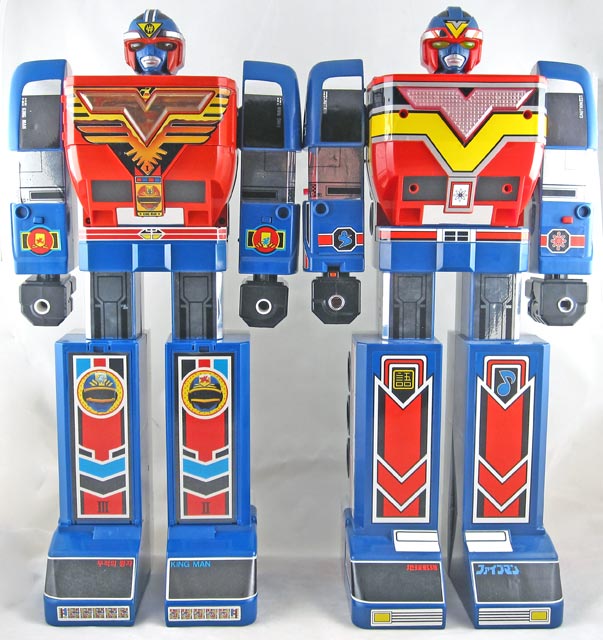 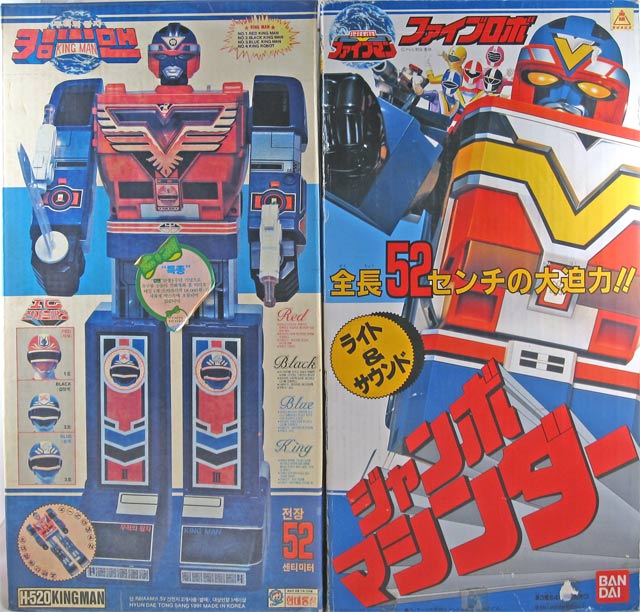 The back of the box has the instructions printed right on it (same as the Bandai version) but they've actually included what looks to be a little mini poster that you can cut out of the top flap! 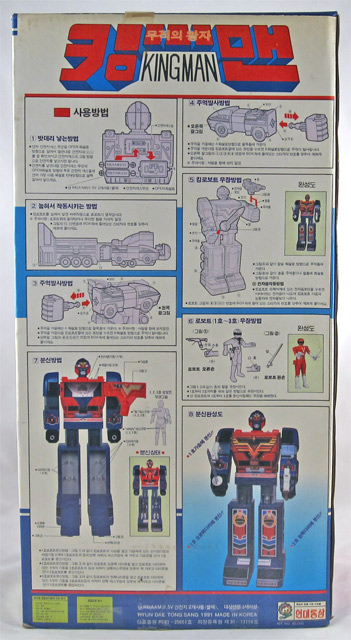 Cut out the poster on the right! 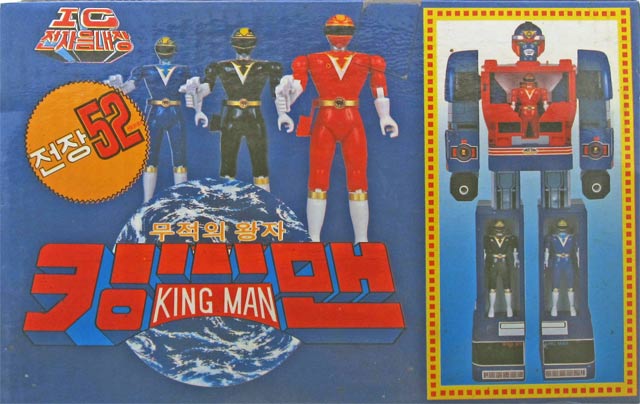 OK, I know I'm spending way too much time on a box, but that's the kind of guy I am (a box snob), so bear with me while I point out one last important detail. Did you notice that weird green sticker right in the middle of the front of the box? Well, apparently it says something to the effect that this release is for the 3 year anniversary of King Man and included in the box is a free VHS tape of some Korean anime ("King Of Football 'Shootdolie" (?) aka 축구왕 슛돌이) that as far as I know has absolutely nothing to do with this robot show. Mine didn't come with this tape, but I think it's neat to at least know that this strange variation exists. Also, even though the box says it was released in 1991, because of this sticker I'm going with 1994 for the release year.

As I've said, the legs have opening panels that you can put action figures in. Three figures are included (unlike the bootleg Fivecar by the same company, that had SIX figures. So how many "rangers" were actually in this show? THREE? FIVE? SIX? TEN? TWENTY? You'd never know from the toys, it seems. Oh yeah, that toy also came out in 1994, which may support the notion that this version of the King Man jumbo did as well.) Each plastic figure is the same sculpt and features 7 points of articulation (neck, knees, hips, elbows and shoulders). Additionally, they each come with a gun and a sword and have holes in their backs and legs into which pegs go to hold them in place. As you can see on the box above, the third figure actually goes inside the chest! 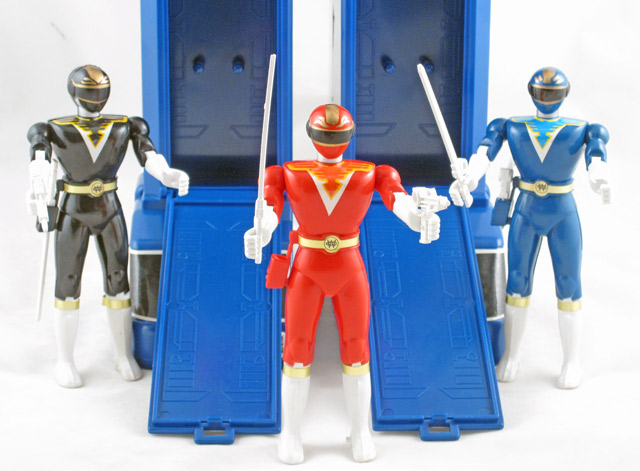 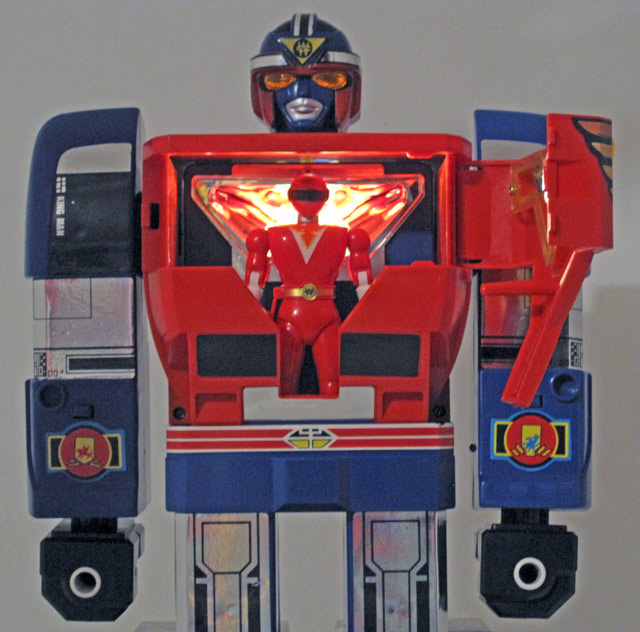 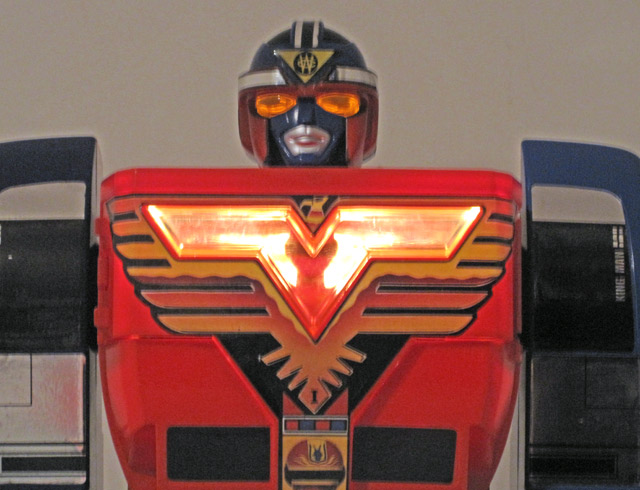 Pretty cool, huh? Well, the downside is that the guns on the hands no longer light up. Bummer. But guess what? Now BOTH hands shoot, unlike the Bandai version in which only one did. I'll trade lights in the hands for shooting fists every time, thank you.

Of course, another notable difference is simply in the stickers on this toy. I really like the "fire bird" look of the chest now and I think it's absolutely hilarious that the helmet of each ranger is plastered right on the cockpits. 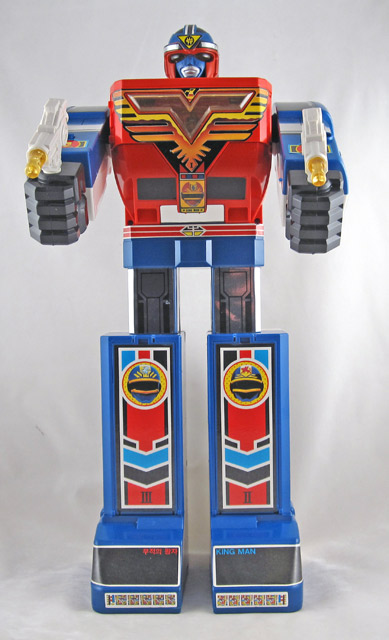 Another small detail that cracks me up is the "CAUTION" stickers on the Five Robo have been replaced with stickers that just say "KING MAN" on this version. To hell with safety!

This guy still comes with two guns, one sword and features the "lie down on my back" transformation. 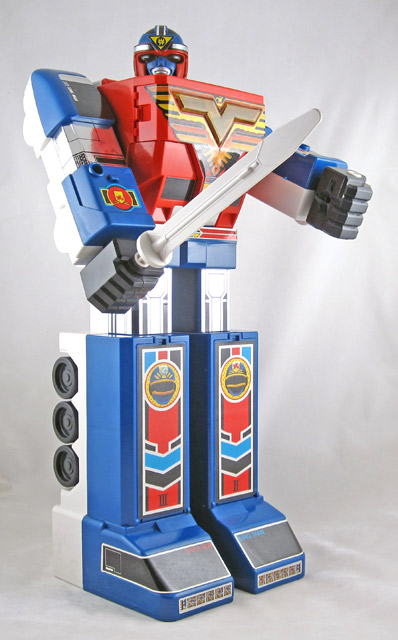 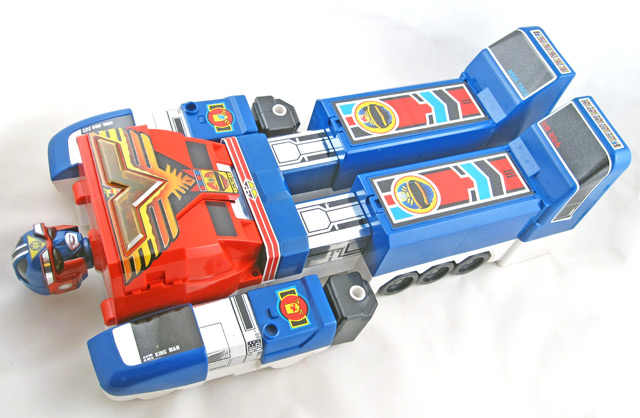 A sticker sheet for added details on the sides is included, but I think it looks fine without them I don't plan to apply them. 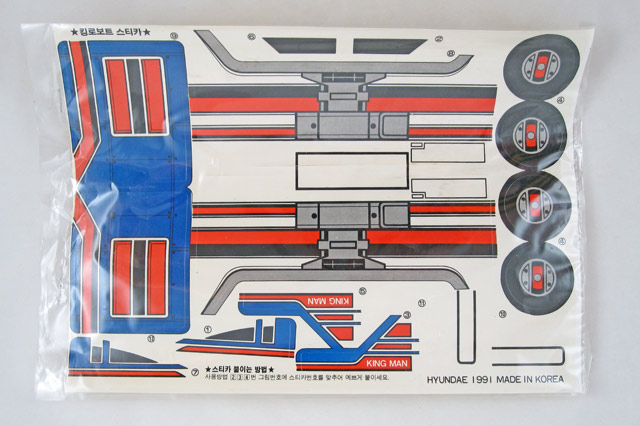 So, as you can see, they really packed this thing with play value. The only downside? As a bootleg, the quality, while surprisingly good, is still not perfect. One tab on either side of the leg hinges on mine broke. They still stay in place fine, though.

Lastly, before I finish up, EVA_Unit_4A offers the following observations that I, as someone who likes Jumbos but not necessarily Super Sentai, totally had no clue about:

As a kid I would have gone ape over this!!!!! Beautiful set and love that you cab actually put figures in the Robot.

I find it hilarious that you bothered to photograph the transformation.

I burn with the flaming cosmic aura of frothing want.

This is a really awesome jumbo. I love the figures-inside-a-jumbo gimmick.

I notice that the rangers are Changeman with the helmets and buckle but have Jetman's bird chest.

Don't worry Eva, it's all part of a larger theme...

Another rip off - On the box - the yellow box with H-520 kingman in it is a direct rip of Japanese G1 transformer packaging.

Ha! Even I didn't catch that. I think you're right!

Um... what does the back of it look like?

It's basically just all white plastic, like the Bandai version. Of course, the manufacturer markings now say "Hyun Dae Tong Sang 1991 Korea". But other than that, the only difference from the pic below is that the back of the head is all blue. Nothing special.

Cool review. I dig that it came with the figures as well. Neat gimmick.

Now this is a super robot I can get behind! There's enough play action features here to keep me interested... I find most jumbos to be too plain... that and I'm not old enough to be nostalgic of the shows they aired on. ;)

Oh and I have to disagree with you. I think the japanese box is a lot cooler, but I guess I can see where your coming from since the korean version is a lot more vintage in style. :)

To be perfectly honest, it wouldn't surprise me if there is also a bit of bias from me simply because of the disparity in availability between the two toys. I mean, the official Five Robo is everywhere and I see it's box literally every day (even if I didn't own it), whereas the King Man version is something unique and I'd only seen that one picture for the longest time. A sort of case of "absence makes the heart grow fonder", if you will. I wonder if the roles were reversed, if I'd feel differently?

Coolest bootleg I've ever seen. I normally have no interest in bootlegs, but they actually added coolness by giving it the figures. I too like the funky masks on each of the cockpits.

I always love great bootlegs... I think this toy is the pinacle of bootlegs :D