Solid States 1 (abbreviated S.S.-1) is the Solbrain mother ship. Despite looking like a futuristic fire truck, it's actually a giant flying fortress. For comparison, the SoulGallop is about as big as one of the wheels in scale. 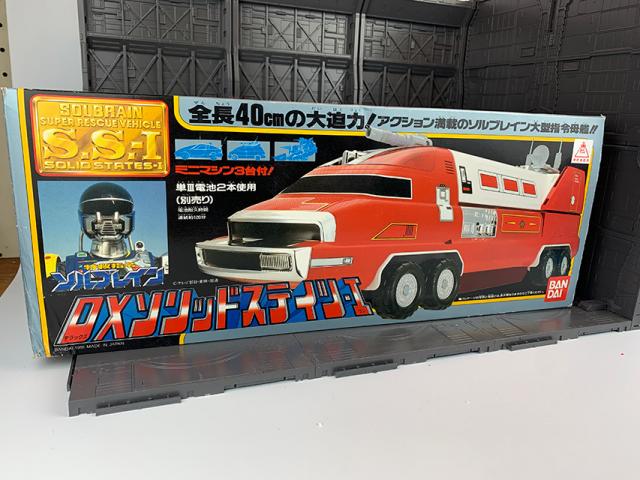 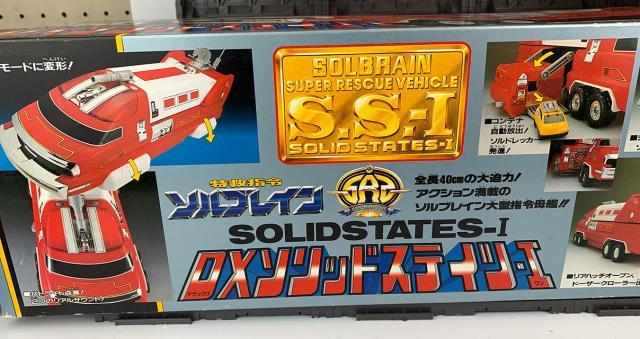 The toy is held in place by two styrofoam end caps - be careful as the small vehicles are stored in the outside of one of the end caps. 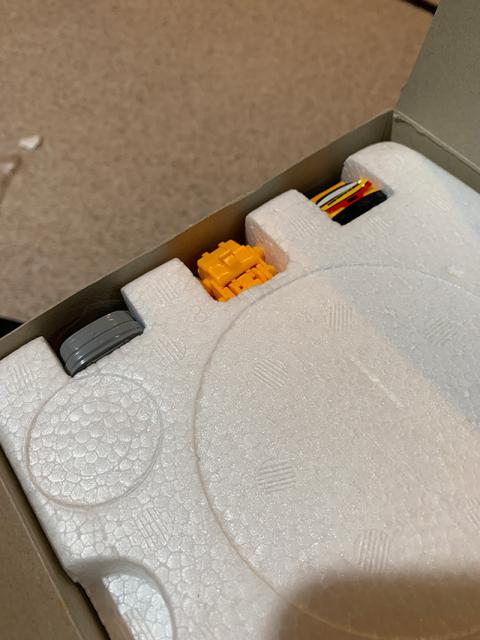 The toy requires some assembly. The grey antenna assembly comes on a sprue and needs to be assembled and attached. It's got a ton of stickers that need to be applied as well, something the previous owner has done.

Included in the box is two fire-extinguishing bombs and miniature Soldwrecker, Solgallop and Soldozer vehicles. 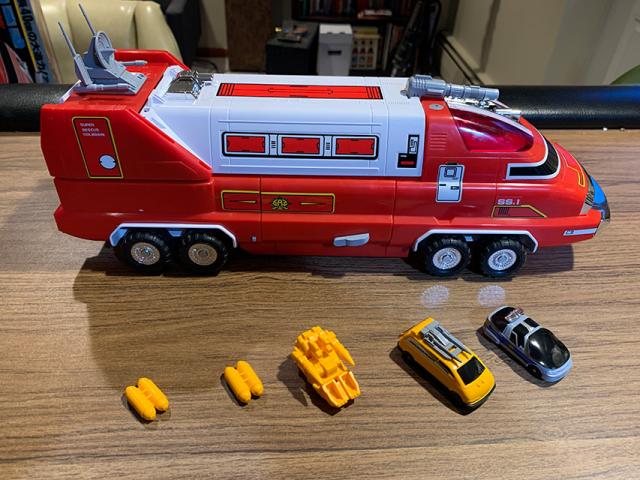 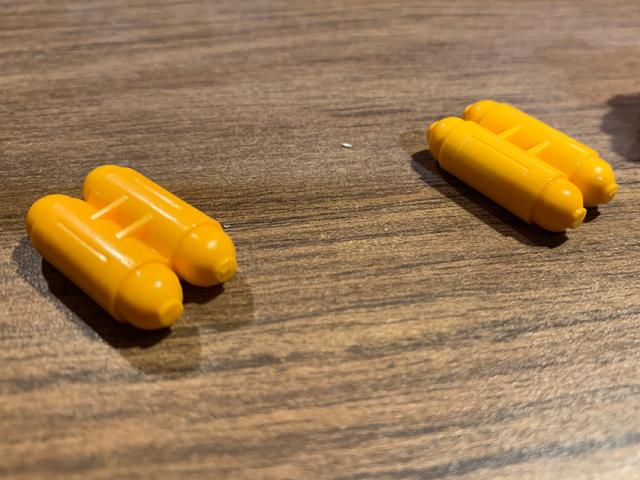 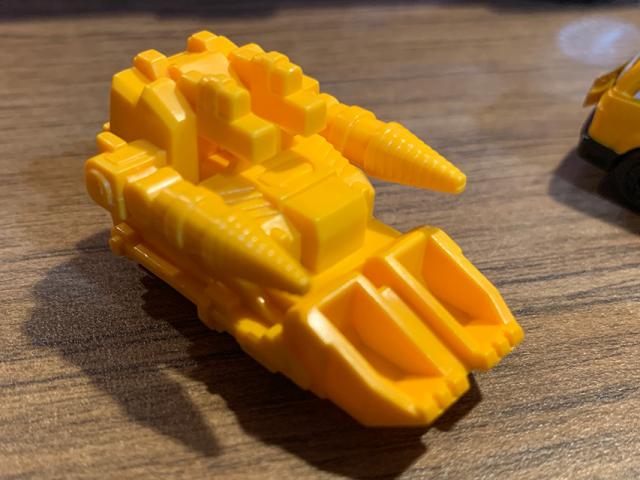 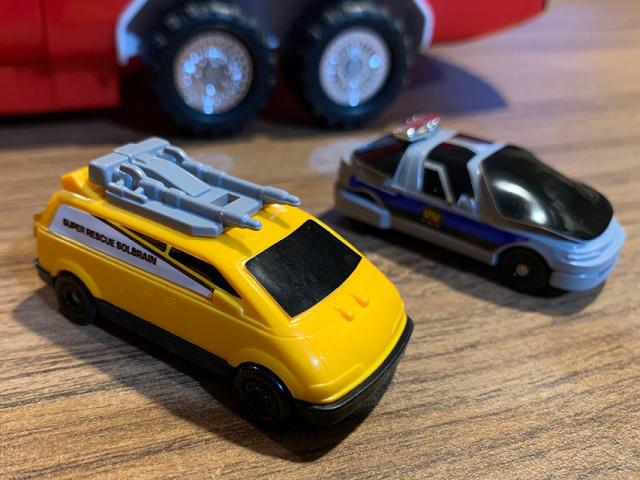 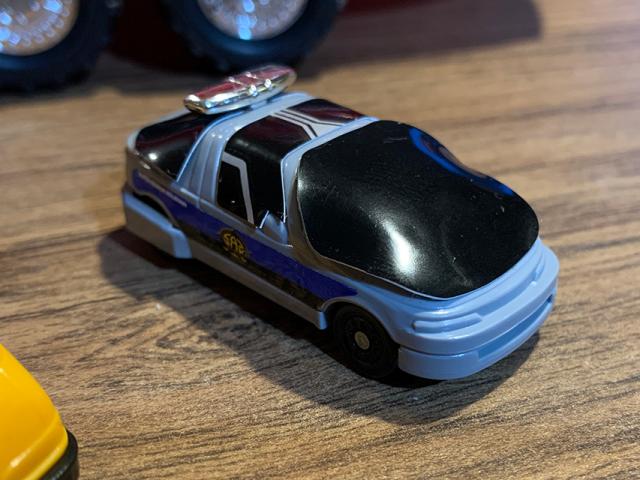 As mentioned before, Solid States 1 measures 40cm long and is all plastic. It's got a significant heft though due to all the gimmicks and solid construction. 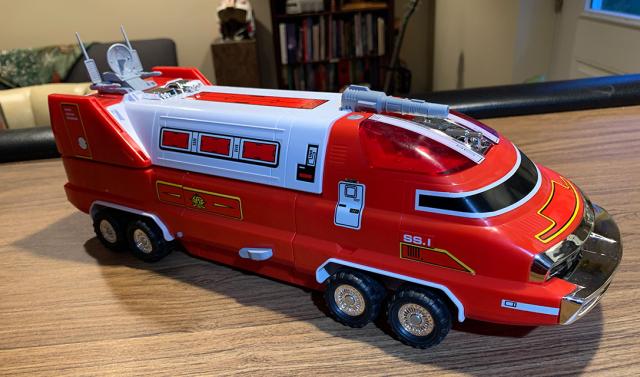 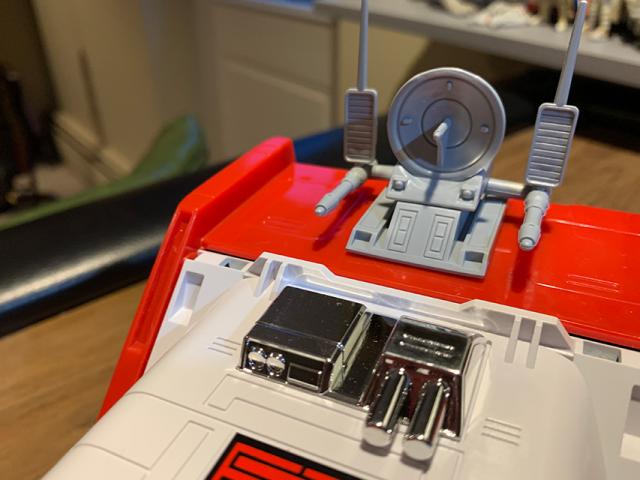 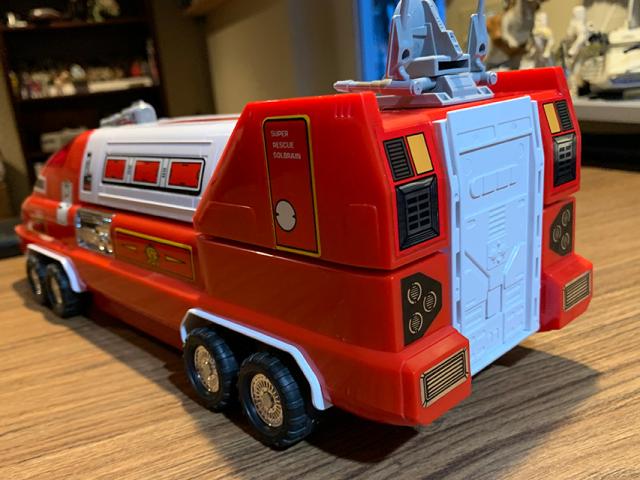 Each of it's 8 tires are made of a solid rubber, making rolling it around a joy. 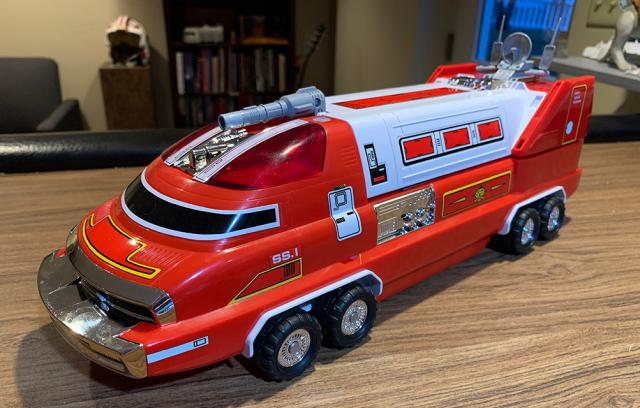 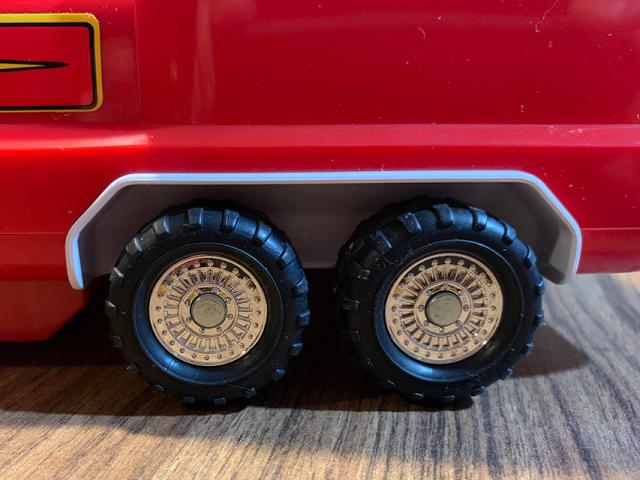 The buttons on either side of the cockpit trigger lights and sounds. Each button has it's own sound, and they are only active as long as you hold them. The toy is powered by 2 AA batteries that fit in a compartment under the white assembly. 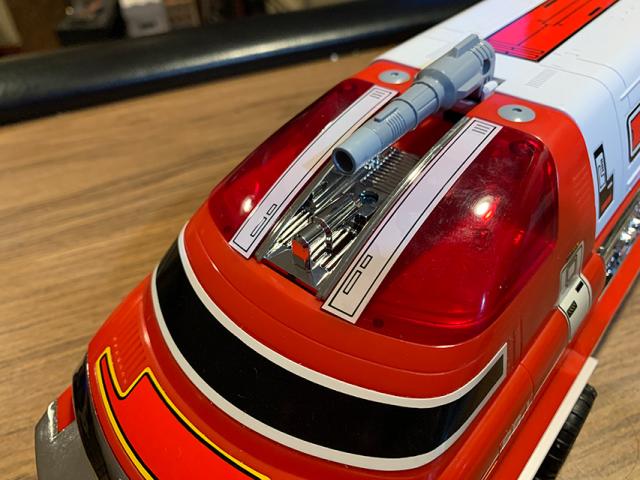 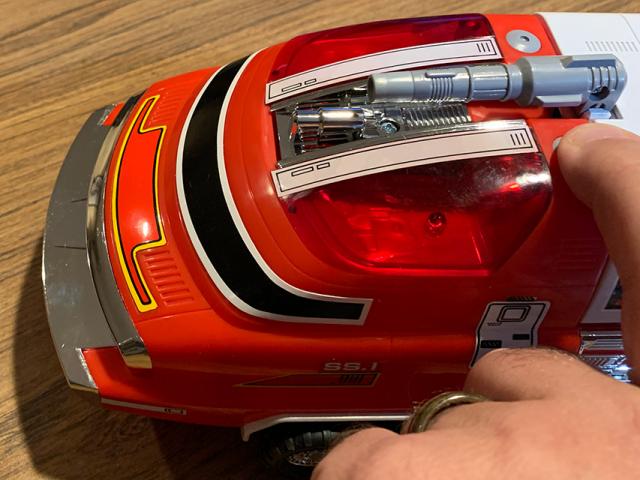 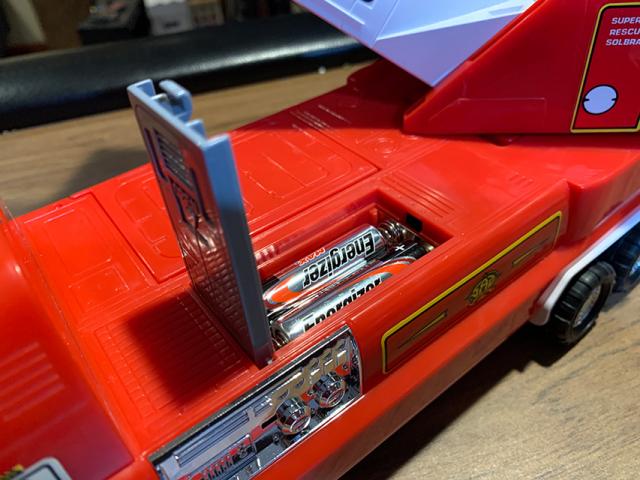 This toy is loaded with gimmicks and play value. First off we will look at the extending cannon. It's styled to look like a ladder, but it's really a launch tube for the support vehicles. The three sections extend to over 42 cm in length! 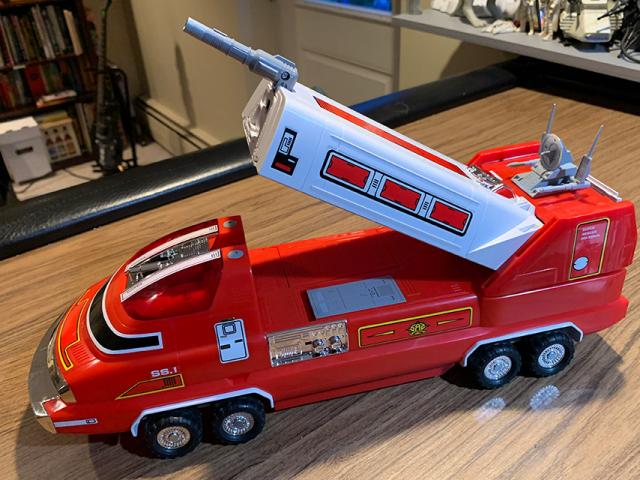 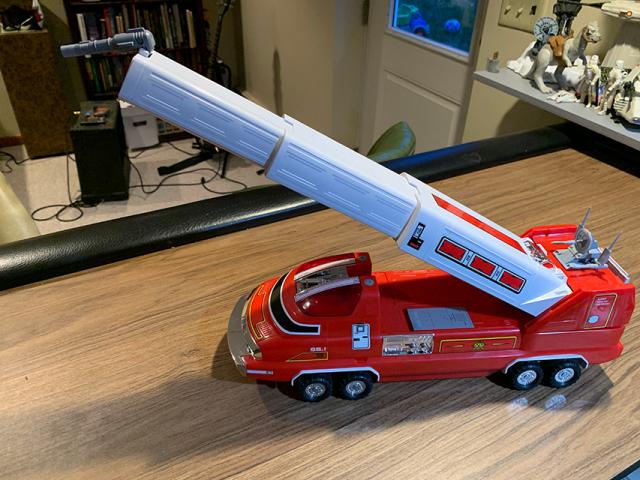 The tower rotates, but you need to release the ramp on the back to free it up. The ramp has two sections, and can be placed in two positions for the two different action features. 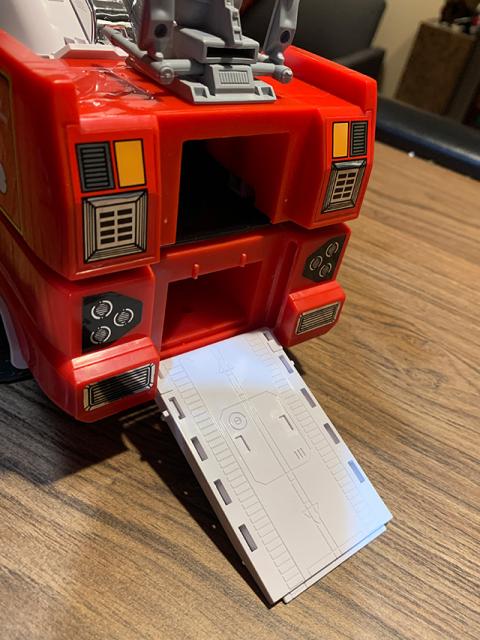 For the first feature, the door at the end of the cannon needs to be opened to reveal a grey platform. You can place a vehicle in here and push it down until it locks, and then a button underneath releases it, sending the vehicle flying out of the cannon. 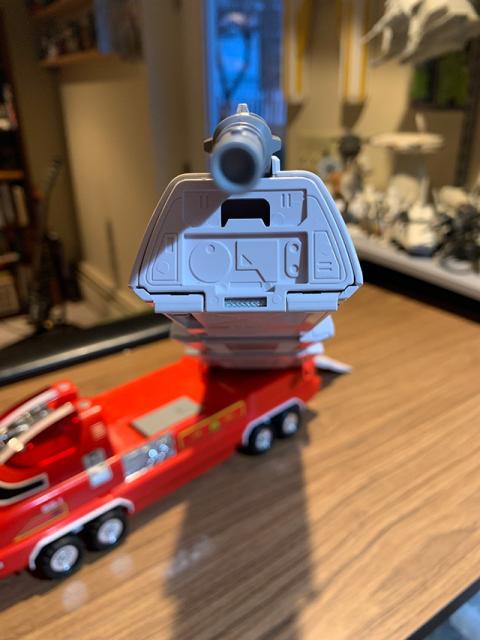 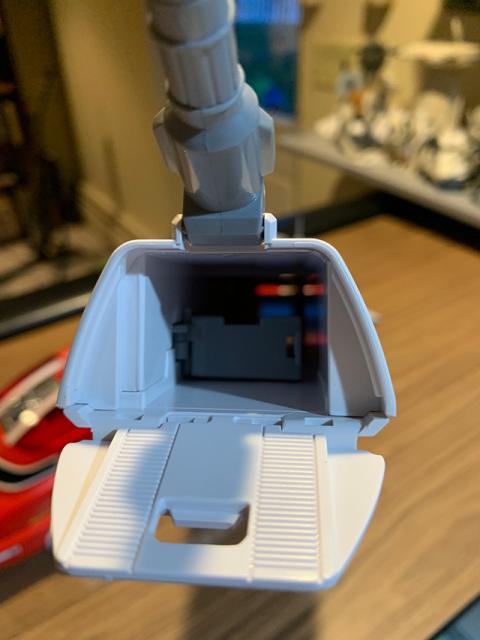 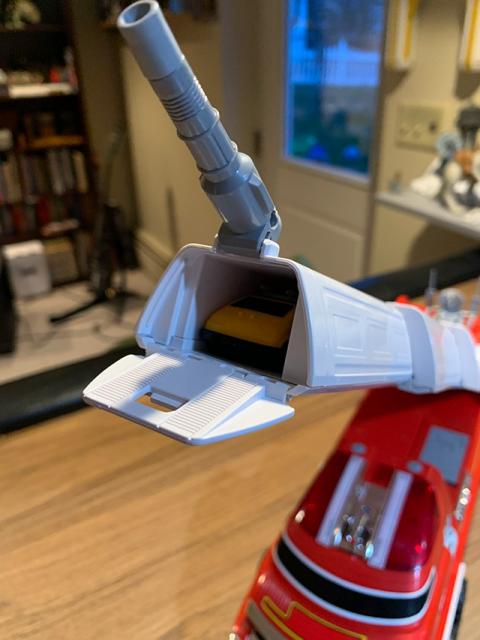 You can also move the grey panel to the side, and when the cannon is lined up with the ramp in back this creates a rescue tube for the vehicle to go into and slide down and out the back. 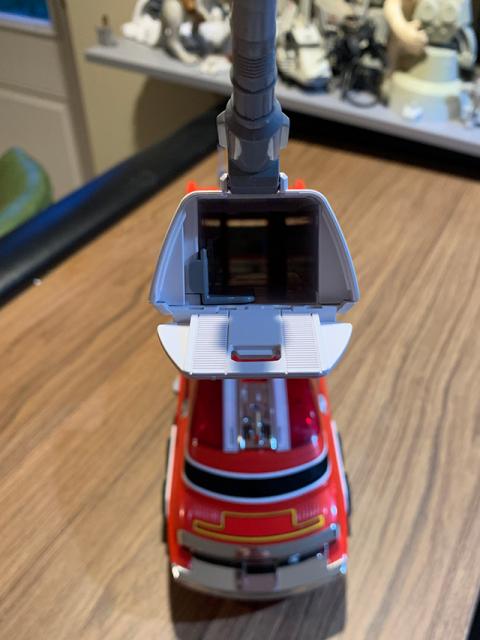 The ramp needs to be in the top position in this case. 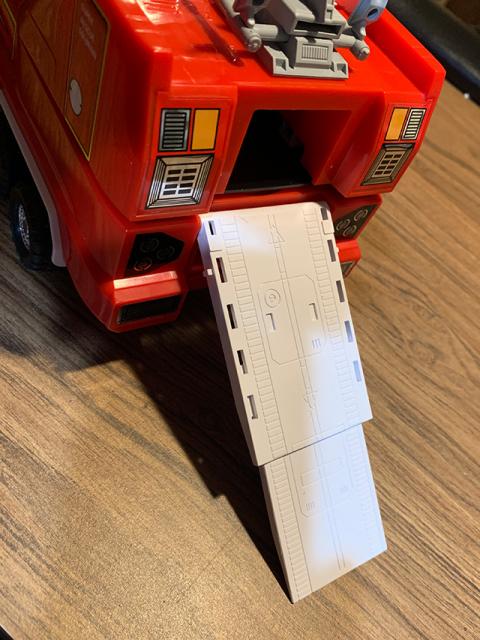 The next gimmick requires you to move the ramp to the lower position. 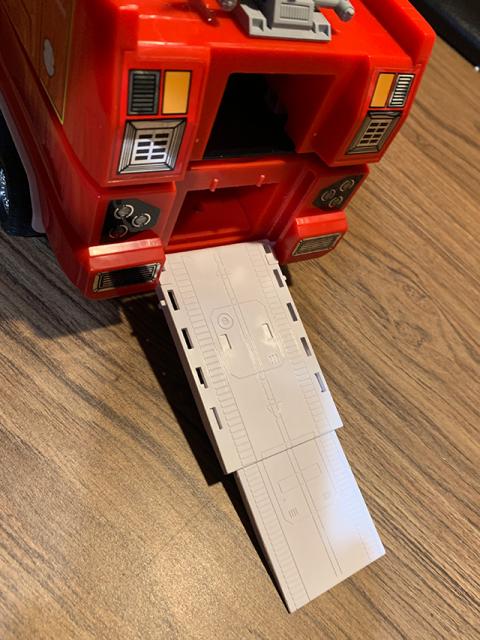 From here you can "drive" any of the vehicles into the back of the vehicle until it lands in a compartment. From there you then press the small grey button on the side which triggers the opening of a spring-loaded container. The spring action is a slow release, so it actually moves out first, then down. 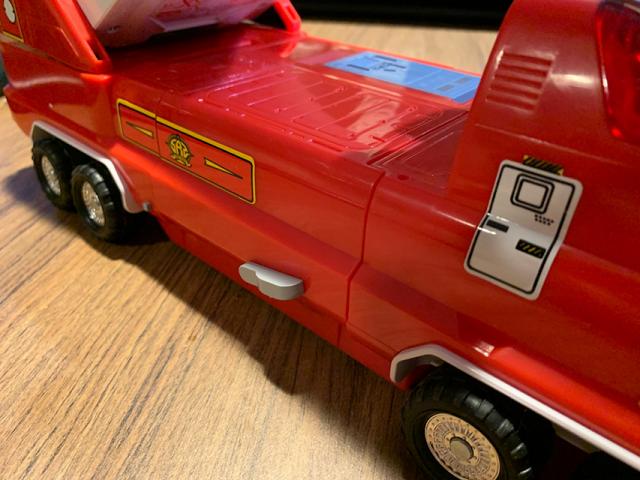 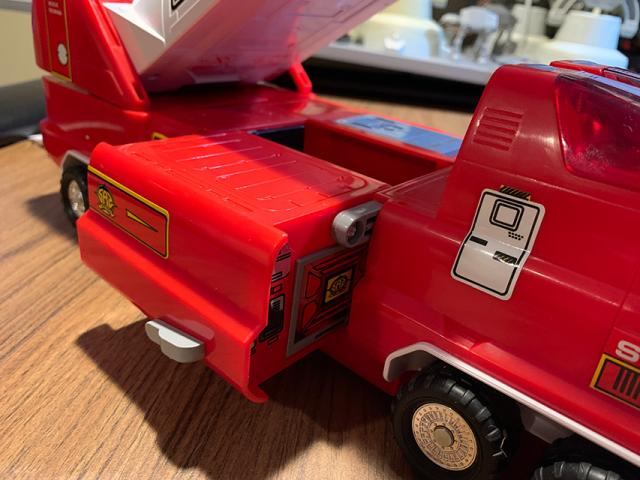 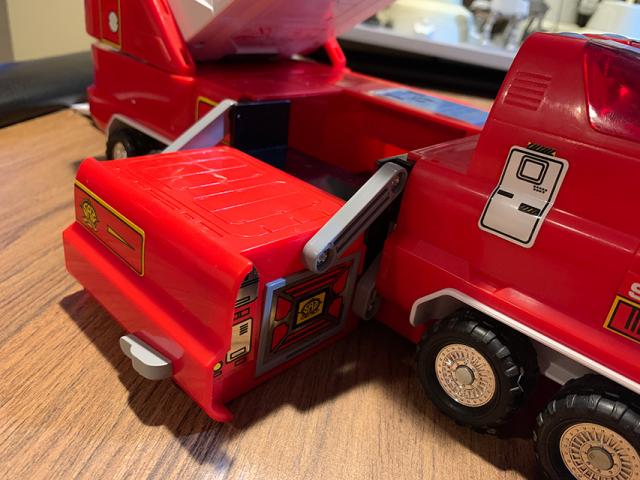 When the container has finished lowering to the ground, push down the grey lever and your vehicle launches! 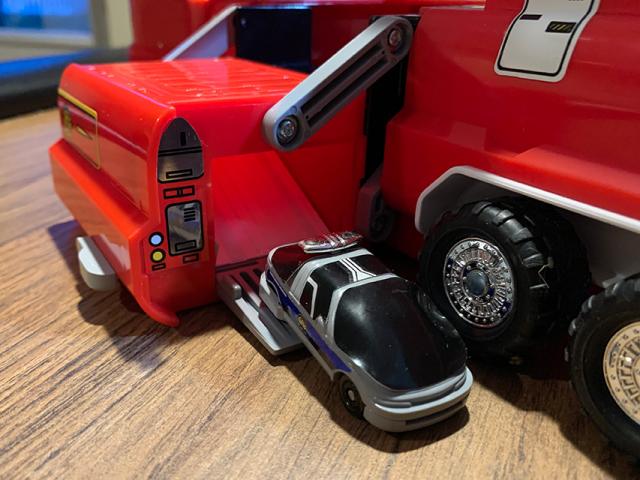 But wait, that's not all! The vehicle can also become a flying fortress by folding all the wheels in. 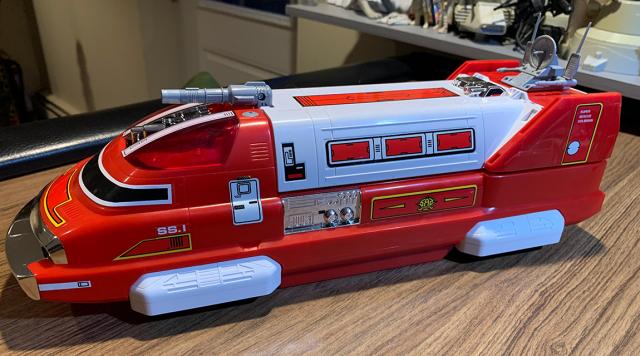 Such a great vehicle, packed with play value. I'm still suprised very few people know about it. Really my only concern about it is where to store it! Long toys are hard to store!