There was a Comic-Con event going on in my city and this little guy was apart of my "haul" (all of six figures). I didn't know much about him nor did I even know who he was, but when I saw him on the table next to other Transformers I thought "MICROMASTER!" and instantly snatched him up with a few others. Here is his personal page if you want to find out some background info about him go here. Also, for anyone whose interested reprolabels has created a set of decals for him and a few other Micromasters as well. Here's Overload and his buddy Erector looking fresh with their brand new decals! 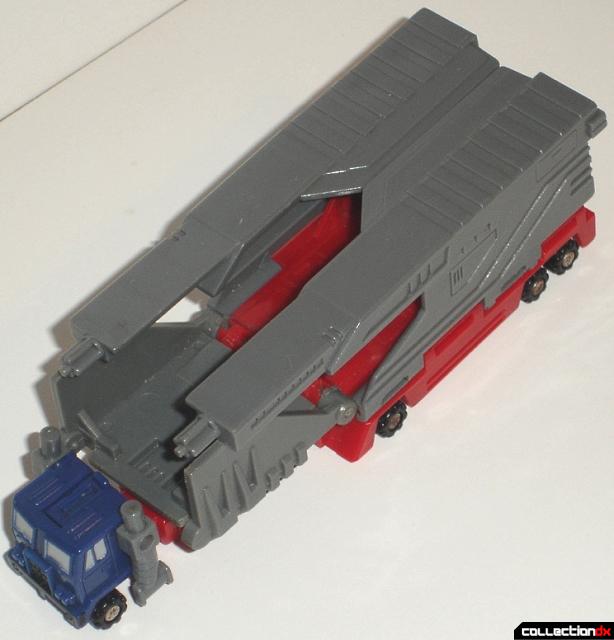 Overload transforms into a flat nosed car carrier exactly like Ultra Magnus except instead of transforming into a suit, the trailer becomes a futuristic jet. He is known as a Micromaster transport and I assume it means that he can carry other Micromasters onto or off the battlefield. 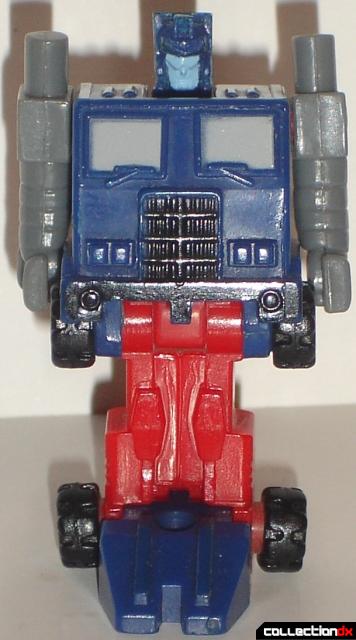 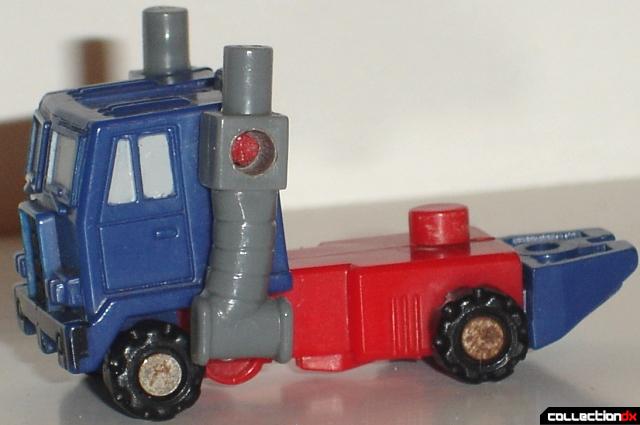 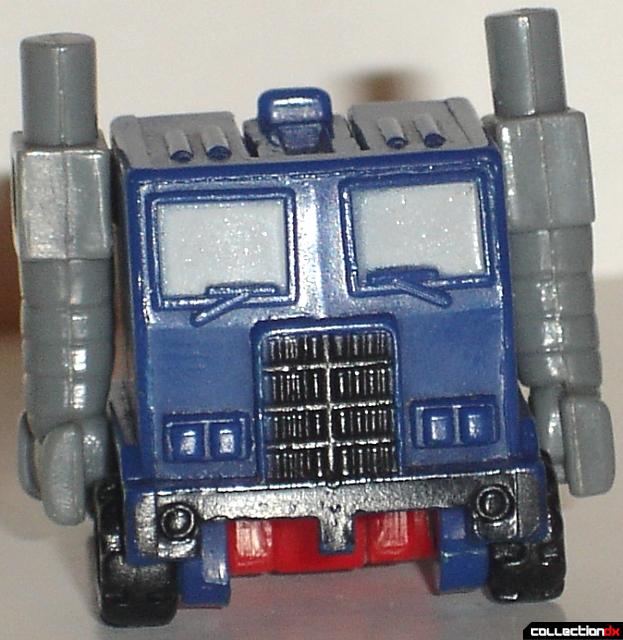 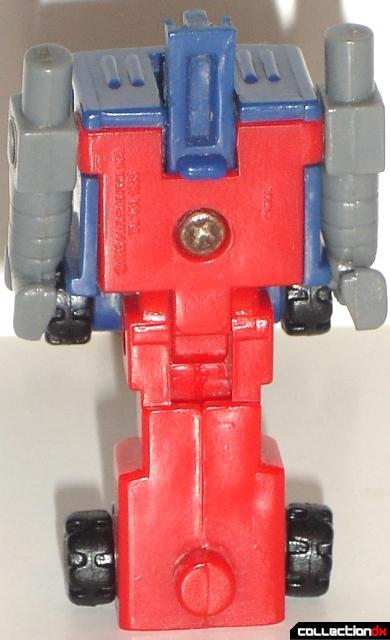 As you can see, he's basically a miniature version of Optimus Prime/Ultra Magnus. The cab is a flat nose truck and his transformation is almost the same. For such a small figure he's very detailed. Top lights, head lights, windshield wipers, even the grille has sharp detail. 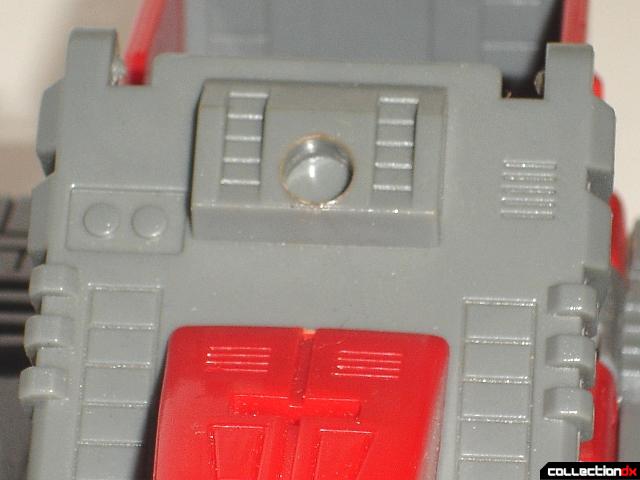 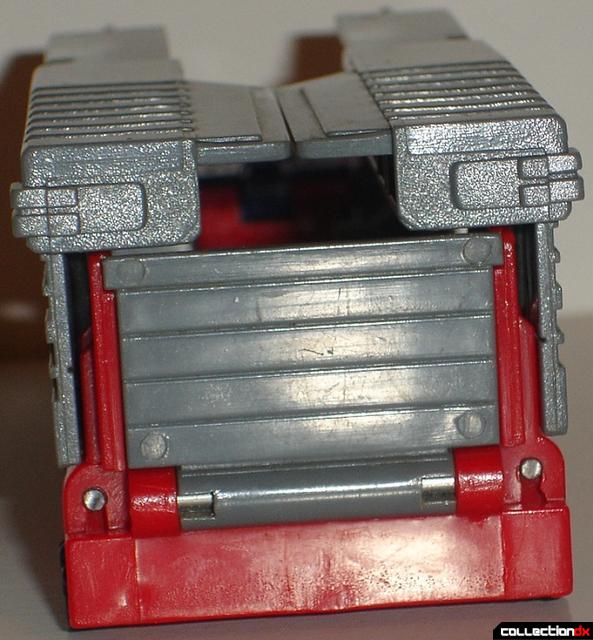 Here's where the fun starts. His trailer transforms into a futuristic jet and has a lot of sharp detail molded onto it as well. This would be a good weapon for gunning down Micromaster Decepticons, but I wonder how well it would do against the likes of Piranacon? 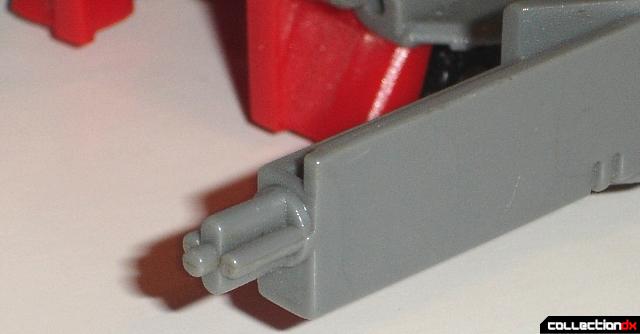 The Gatling guns molded on the tips of the wings are a very nice and creative touch. They don't launch, but because I enjoy this set is so much I can overlook it. 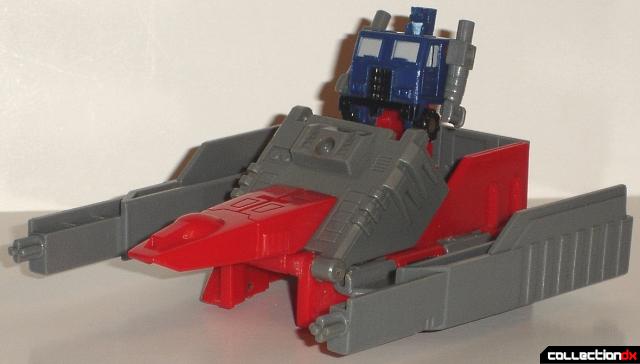 The sample I have is missing a piece on top of the jet mode. A bar that folds up in front of where Overload is supposed to stand. I didn't know this until I looked up pictures online, but it doesn't bother me at all. The Micromaster transports combine two things that I love and that robots and play sets (yes, I consider this a play set). Even though he is tiny, he works very well with his trailer/jet accessory. Robot mode is just a tad floppy, but this guy is a quarter of a century old just like me so of course he's not going to be in perfect shape. That beings said, everything looks good, andnothing broken other than that bar missing but I never notice it anyway. Even though he is floppy, he can still stand up on his own so he's not a complete spaghetti noodle. Not sure what he's going for these days, but at Comic-Con I only paid $15 for him. To be honest, I love this guy so much that I'm going to try and track down all the rest of the Micromaster bases/transports. If you want something cool (and fun) in your collection and not looking to spend too much, I strongly encourage you to do the same!

Wow, this review really made me nostalgic. Overload was the first Tansformer my parents bought me when I came to the US and I remember playing the hell out of it. The arms were the first thing I lost followed shortly after by the handle bar thing but I still have fond memories of it.

Glad to have taken you back down memory lane! :-)

I had this when I was growing up. Not so much now... I don't think I have any micromasters in my collection at the moment... Hmm...

Also, just from memory, there's a hole in the cockpit of the jet for the peg on the back of Overload's legs so he can sit down in his jet, and stay there while you're flying him around. Pretty cool...

I just checked and you are correct! I never would've noticed it.

About the missing bar: It would also connect to the pegs on the front of the gattling guns to hold the sides of the trailer up in truck mode, basically making a more sturdy transformation.

Mines is holding up perfectly without it. Like I said in the review, I don't even notice it missing. Lol.