I love this design. If I would let myself, I think I would have a massive Mechagodzilla collection. The character speaks to my childhood; of all those Saturday mornings watching Creature Double Feature on channel 56. 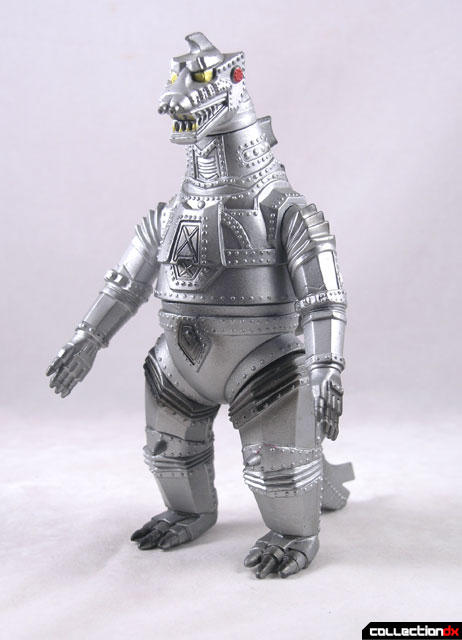 When I went to Tokyo in early 2009, one of my missions was to get cheap vinyls of all the Godzilla kaiju for my kids. They have a lot of them already, but were missing some of the more obscure ones. Battra, Kamacuras, Minya, and MechaG were all on the list. 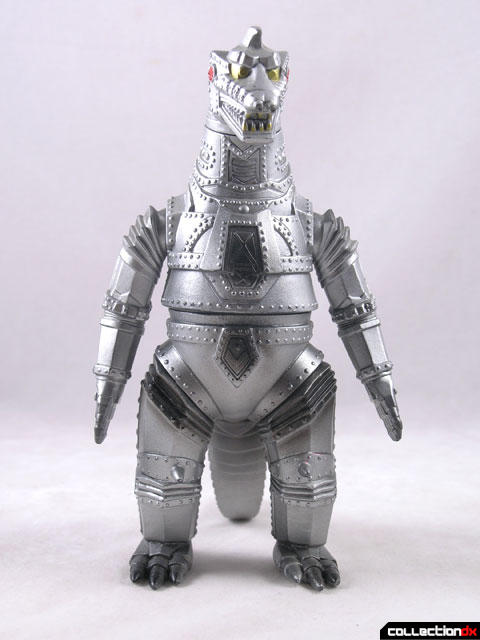 I ended up finding a couple MechaG vinyls in a bin in the basement of one of the Liberty stores in Akihabara - the one in the Radio Kaikan building. I got the best scores in there. These were loose in a plastic tub for $10 each. I got two. One for them, one for me. 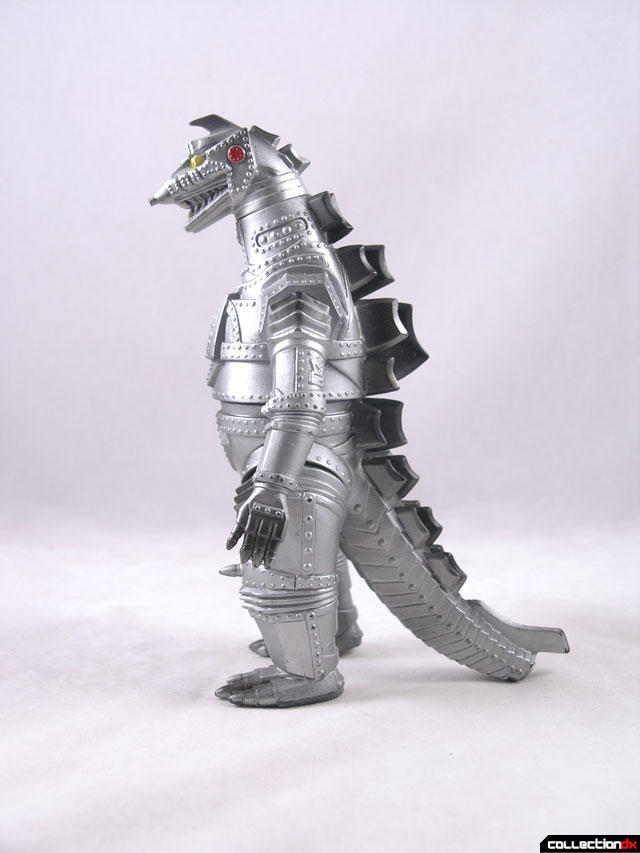 Sure, there's a little wear, and no tags, but they are just beautiful. 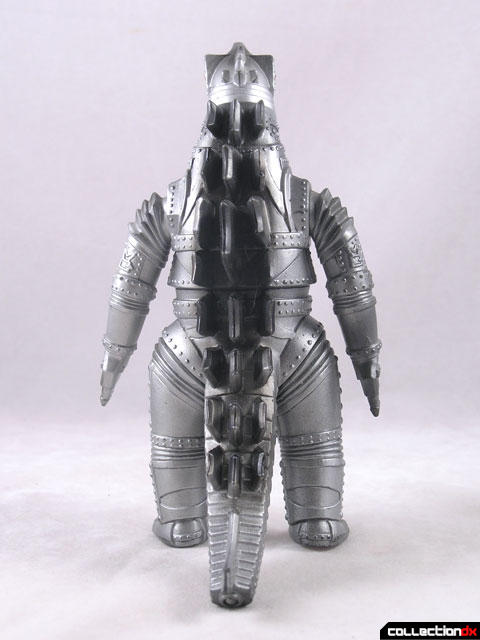 At about 8" tall, these soft vinyl figures are clearly toys. The spray is quick and cheap, the articulation simple. But the look to me is just awesome. 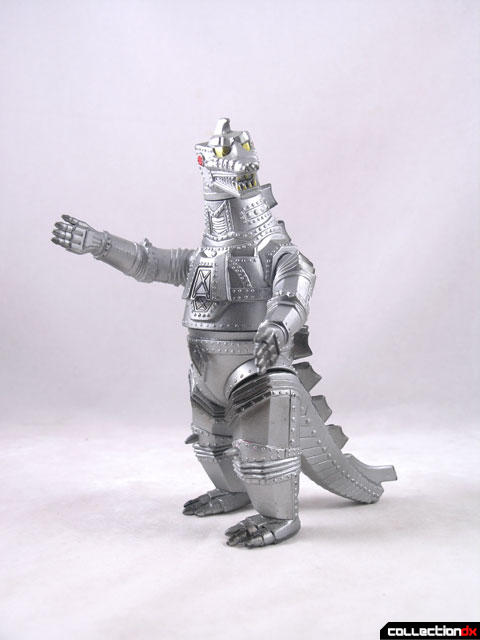 The toy is molded in silver with black, red and yellow paint applications. Articulation is limited to the neck, arms, waist and legs. 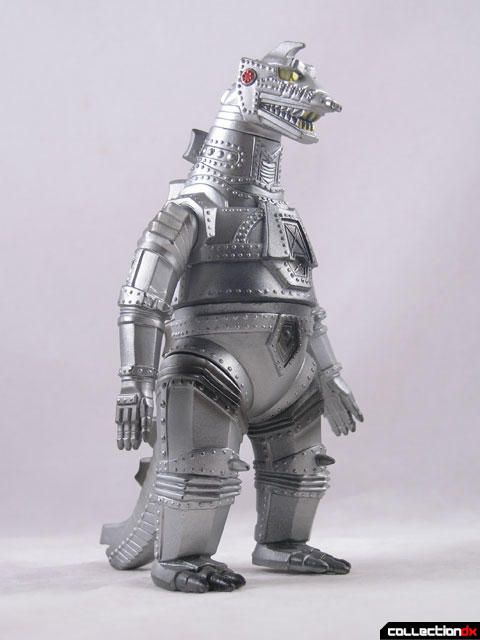 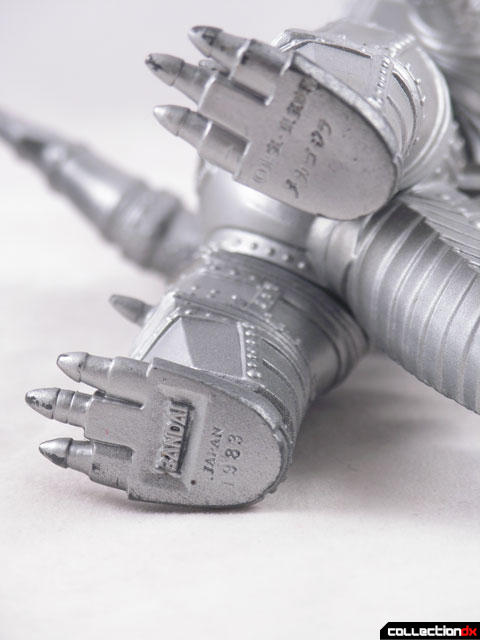 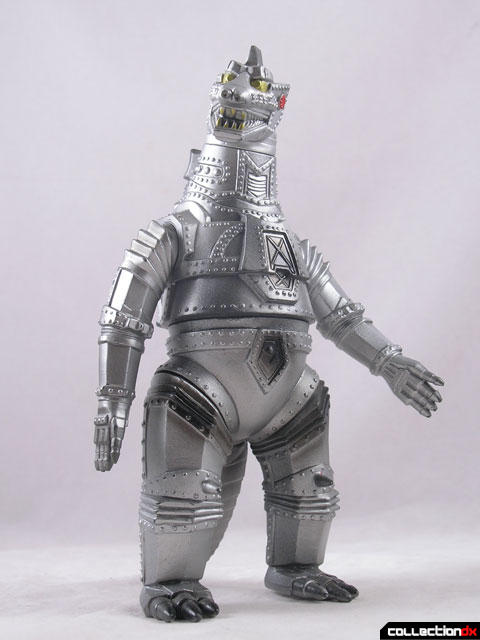 Josh, I love it when you review old toys. Actually, I love it when anybody reviews old toys on here. I have always had a soft spot for Mechagodzilla and I am planning on picking up the 83 version of this toy at G-Fest here in Chicago (July 9th through the 11th at the Rosemont Hotel in Rosemont, IL near O'Hare airport if anyone is interested. I believe it is the only Godzilla related convention in the United States and it is awesome).

Thank you Josh, and thank you to everyone else who reviews vintage toys. That is why I love this site.

What channel used to use Robert Palmer's (?) "The Heat is On" for their commercial jingle? This would have been like between 85 and 88 I think. It's been in my head all these years. The song was changed so they'd be like "the heat is on channel !"

I remember that too! Could it have been 38?

I think maybe it was. Can't find it on youtube,though.

I remember that! Unfortunately, I don't remember the channel. I think Glenn Frey sang that song, but I could be mistaken.

I think it was 38 - i distinctly remember it being used for a bruins promo?

I absolutely love this design, I own one vinyl and 2 chogokin (newer designs) but Id own all MGs if I could. I used to always watch Japanese monster flicks on sundays and loved Godzilla, then the first time I saw Mechagodzilla I was like "what? a robot version of the already great Godzilla!" The older style Mechagodzilla is definetely my favorite.

Although its not a complicated toy, I am glad he has his own review

This one really speaks to my childhood too. I own Godzilla vs. MechaGodzilla on VHS and good Lord, I watched it again and again. Great to see this up here.

I love MechaGodzilla! I think this vinyl is killer and I am not a vinyl collector. I have the chogokin version. Not to high-jack the thread but, I really wish they would do a gokin version of MechaGodzilla's brethren MechaKong. MechaKong it the sh*t!

I think they can't do the Mechanikong because he's a version of King Kong,who Toho does not own and cannot give the rights to. That's what I remember hearing,at least.