The Transformers cartoon came to a messy end (with a terrible Sunbow scandal), the toyline and comics continued to press on in the face of turtle-shelled adversity. Not that I was aware of much of this at the time, because I was only like two years old. Being born right in the middle of the 80's meant I was not privy to Generation One in its heyday, but I did enjoy the waning years as much as any child could. While there is a lot of praise and nostalgia for the early years, one must not forget that "G1" endured a good six years before it ended around 1990.

1988 is when Transformers started to become more... much more than meets the eye as the Headmasters and Targetmasters were joined by even more gimmicky toys like the Powermasters and Pretenders. Many of the different 'Masters were further split into large and small toys so every child with a meager allowance could partake in some Transformers toy time. 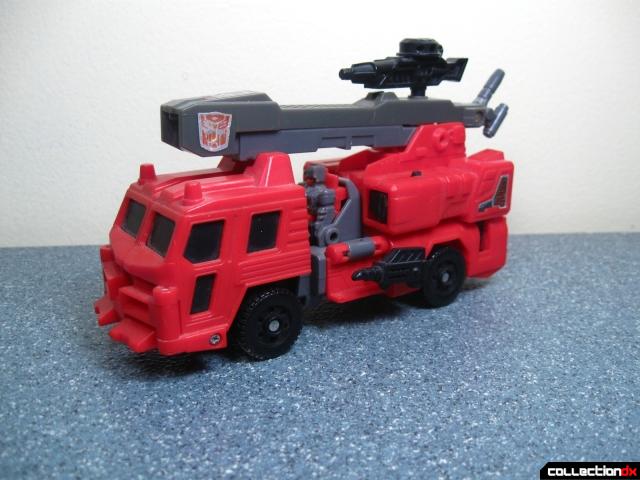 This is Hosehead, one of the small Autobot Headmasters released in '88. It is here where my life with Transformers begins as all my old beat up catalogs date back to that year. Like many of the late G1 toys, Hosehead is a futuristic vehicle that is simply referred to in the instructions as "fire truck." While he isn't as down to Earth like his forebears Inferno or Hot Spot, Hosehead is still recognizable as one of three things every kid wants to drive when they get older. 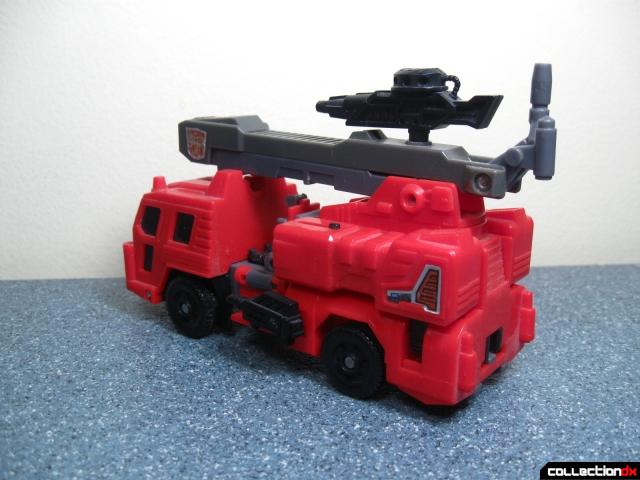 Hosehead is about five and a half inches long in vehicle mode. His robot mode rifle can be plugged into his articulated ladder and resides right where the hinged faux water nozzle normally rests. To this day it still annoys me that Hosehead can't store his gun without making the nozzle hang awkwardly off the back. His two extra guns plug neatly on both sides of the fire truck. Many later Transformers would champion the idea of gun storage in vehicle mode and in retrospect it's one of those things that kept a lot of my old toys complete. 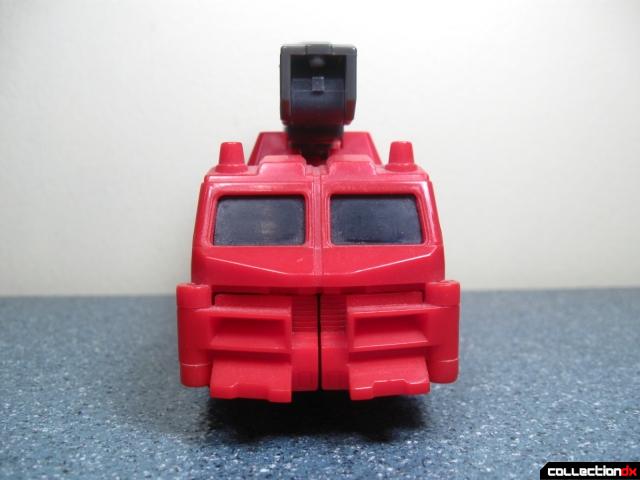 As far as futuristic fire trucks go, Hosehead is definitely a mean lookin' machine. The extra forked bumpers on the front make this truck look like its meant to be a rescue battering ram. Thankfully Hosehead is built of thick kid-proof plastic and can certainly take a playtime pounding. 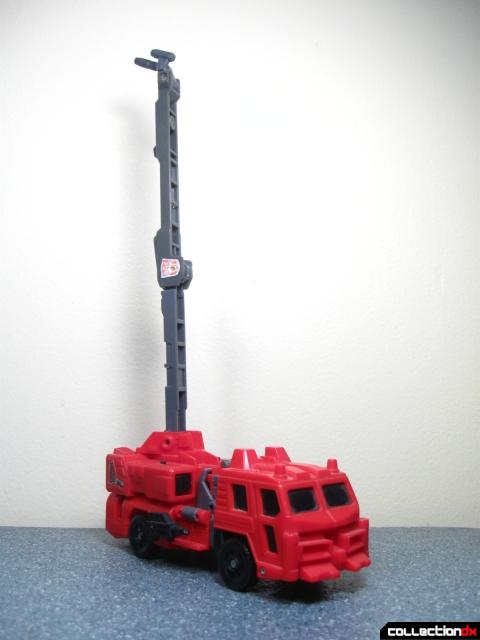 The ladder unfolds to nearly a foot in length and rotates at the base with a strong ratcheted swivel. My Hosehead is a bit old so his ladder can't really maintain a position other than straight up or straight out. 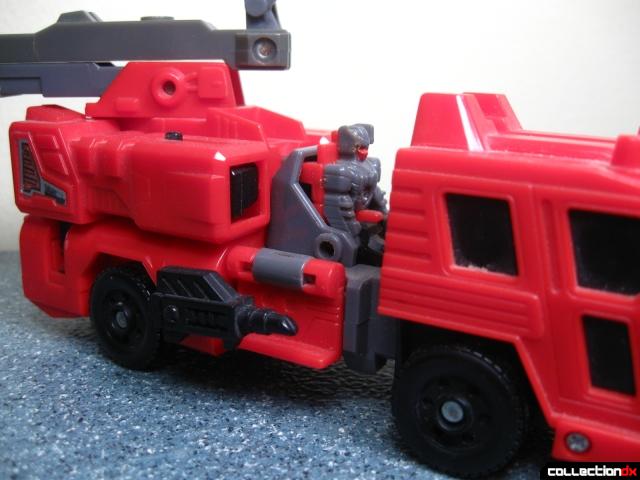 Due to the way Hosehead transforms his Headmaster partner, Lug, has to sit behind the cab. Still he's quite secure in his little seat that fits snugly into an indent in what will become Hosehead's legs. 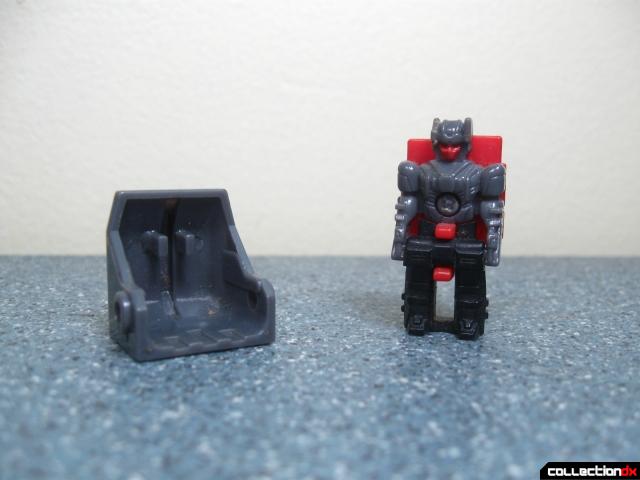 Lug is an interesting piece in and of himself. Unlike the larger Headmasters partners, Lug's articulation is limited to his legs which allows him to sit in his head or curl up into head mode. The seat piece fits snugly around his body and stays attached thanks to an extra clip that hugs around the face on Lug's back. 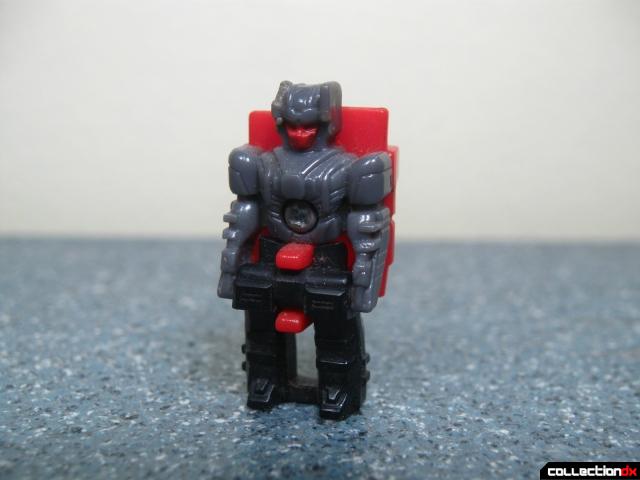 In his 25 years in existence, my Lug has managed to survive with only a chipped helmet fin showing his age. 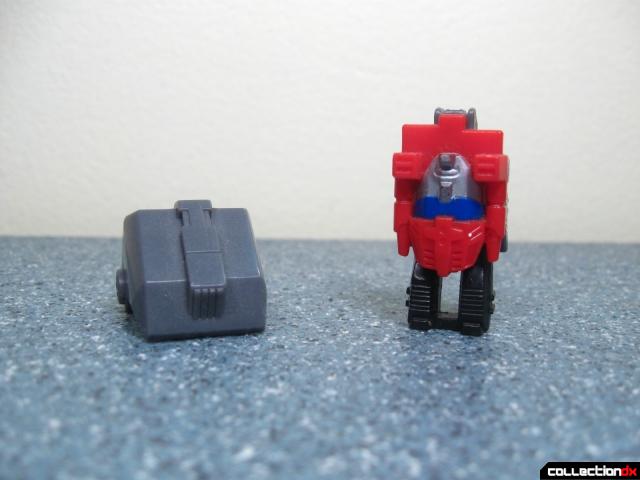 Being about half as big as a large Headmaster partner, Lug lacks the extra flip down plate that covers the main robot's face. Lug doesn't have eyes in the back of his head, but the back of his back. The seat serves as a helmet for the finished robot. 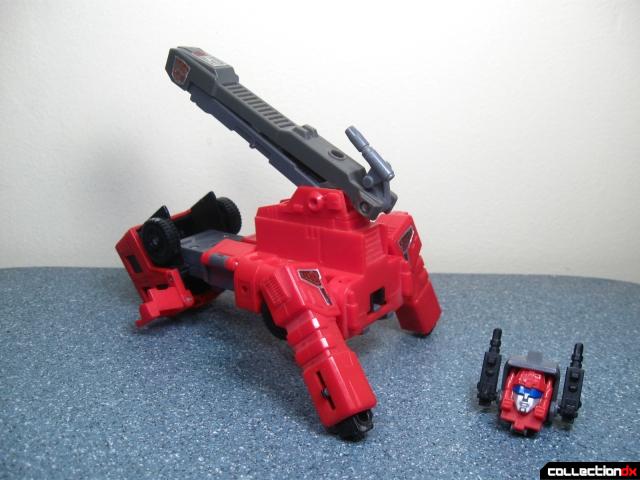 While Hosehead's transformation is quite simple even by G1 standards, the major joints still produce satisfying clicks when they are moved which enhances the experience. 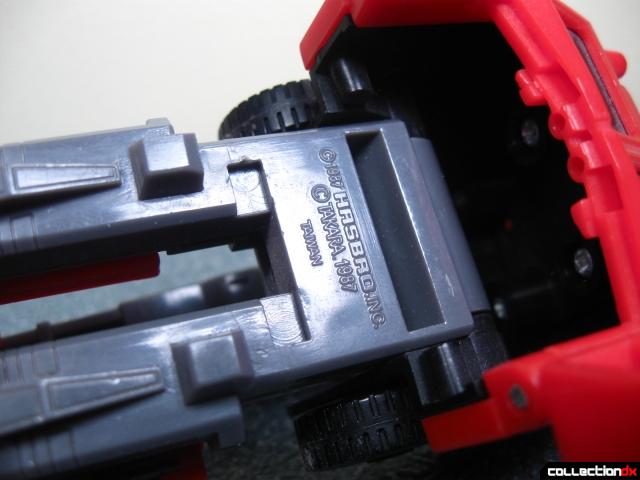 During the transformation it's a little easier to see Hosehead's copyright markings that are dated a year before the toy's actual release. This annoys one of my fellow reviewers to no end. 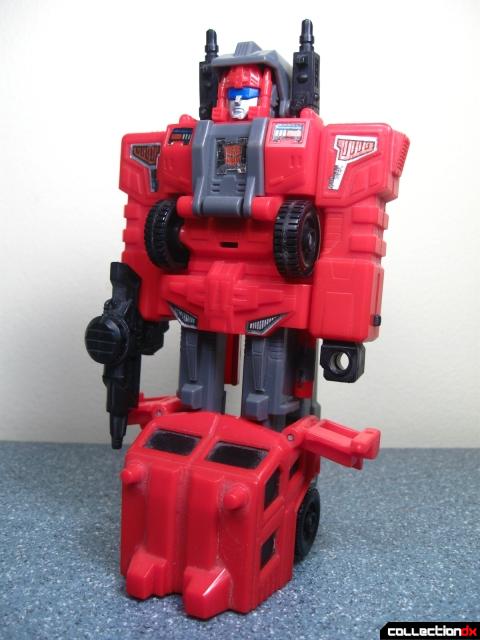 In robot mode Hosehead stands about six inches tall. He is a sturdy looking fellow who exemplifies all the things about the late G1 aesthetic. His largely red body is broken up by a few spots of gray and black, most of which is unpainted plastic. 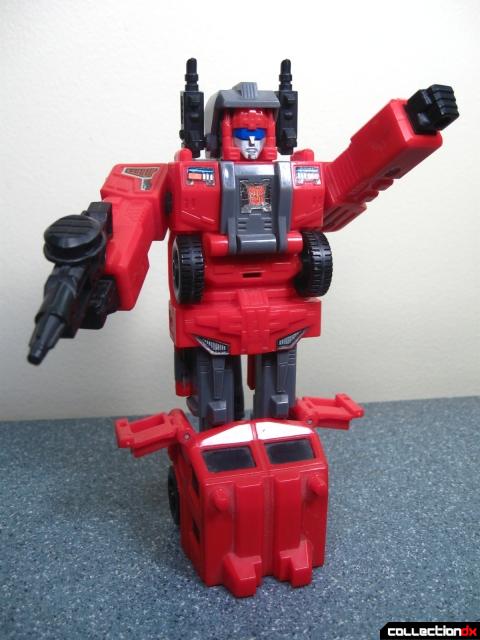 While Hosehead possesses little articulation, the ability to move his arms off to the left or right as well as up and down makes him right on par for this era of Transformer. I do appreciate how the old Takara SF Land aesthetic is still preserved in a figure far removed from the Diaclone days and as such Hosehead has a lot of detailing on his arms, waist, and legs that make him appear to be a fully functional robot even if the toy is so simple. 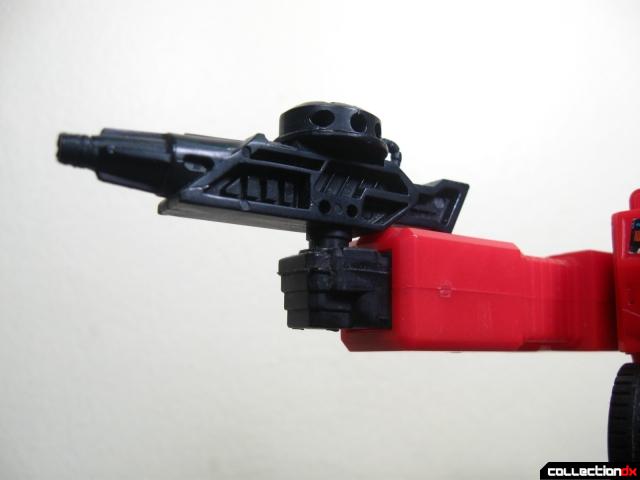 His main gun is curiously similar to the Zaku's machine gun from Gundam. The weapon itself is kind of a neat drum fed sci-fi rifle that even has a tiny hose going from the drum into the main body. There is an somewhat deliberate style to Transformers guns that is all part of the aesthetic. 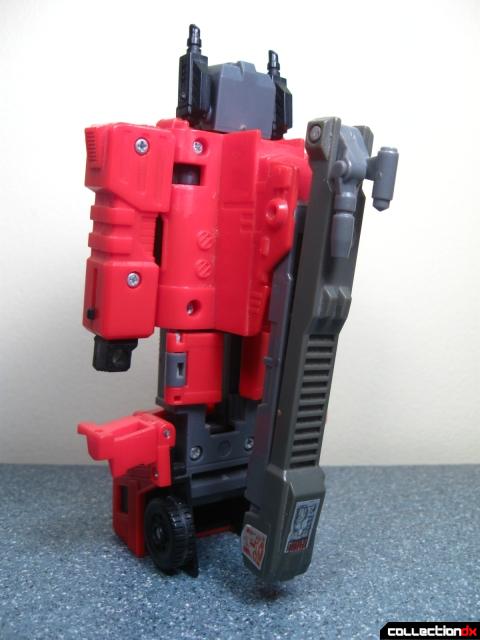 When his arms flip forward for robot mode, it leaves Hosehead with the typical ladder backpack as seen on many G1 fire trucks. As the whole mechanism remains untouched it does stick out a bit. 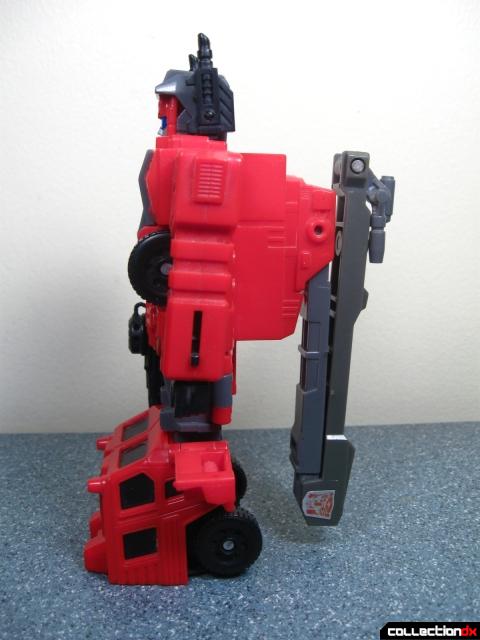 Despite appearances, the bottom of the ladder is still off the ground but only just barely. 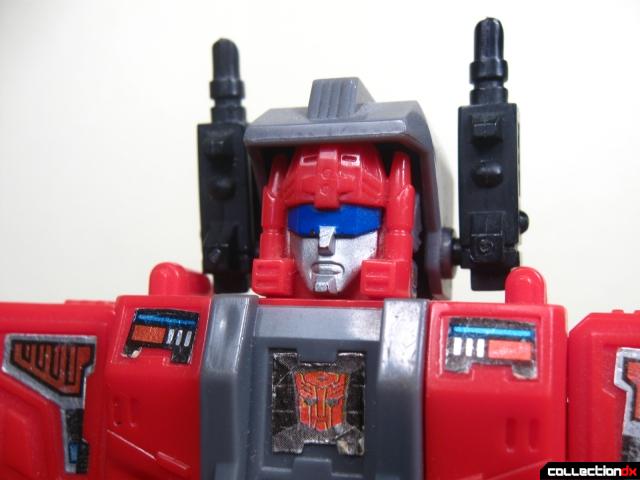 Hosehead's... er... head is another good example of that Takara style with its basic yet effective layout that is framed by enough mechanical details to make it appear robotic. His blue visor (cuz he's an Autobot, damnit) and silver face are his only paint applications. Lug's seat becomes Hosehead's squarish helmet that makes for an odd contrast with his somewhat oblong shaped head. The dual small guns plug into either side to become a set of cranial firepower. Oddly enough the instructions say to tilt the guns forward for robot mode. However, those same instructions also somehow neglect parts of his simple transformation so I know they are dirty liars. A smattering of the typical Transformer stickers that dot his body help to break up the monochrome swathes of plastic. I especially like the small but essential chest sticker with the requisite Autobot symbol. 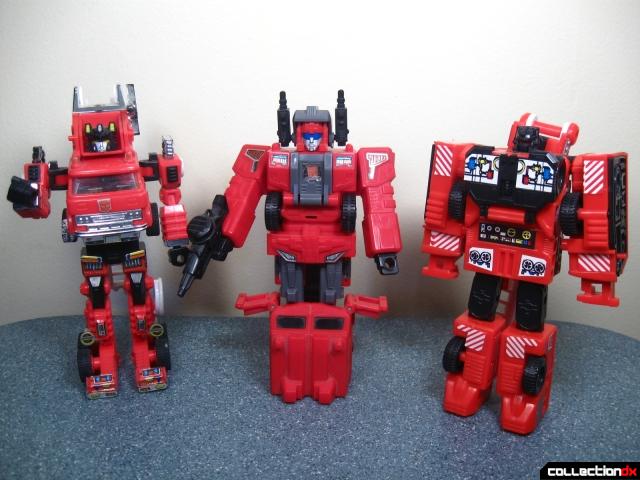 Hosehead is sized just right to stand alongside his fire truck brethren. The bootleg Hot Spot even helps keep the color theme! Who ever heard of a blue fire truck anyways? 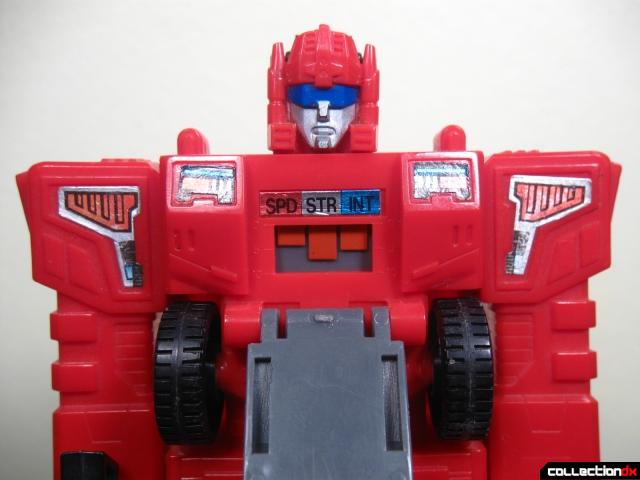 The small Headmasters all had a less functional version of the chest mounted stat gauge their larger cousins employed. When you insert Lug into the base of Hosehead's neck, the stats always reads 5, 10, and 5 for speed, strength, and intelligence. On the larger toys, the three gauges would change depending on which head was inserted. 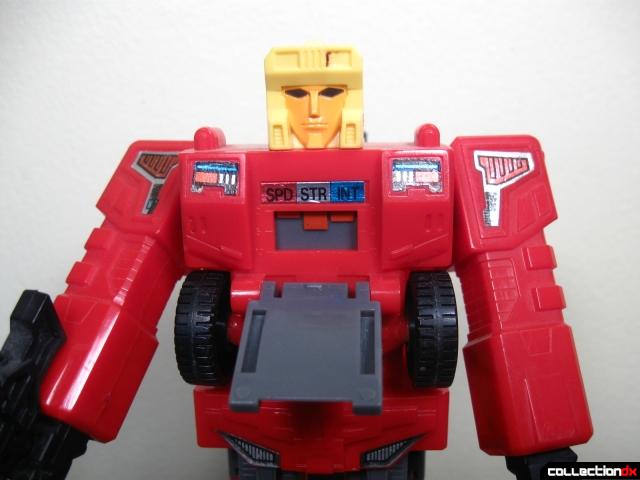 On the smaller toys, the state gauge always produced the same readout no matter whose head was inserted. Putting Muzzle into Hosehead's body won't make it smarter. 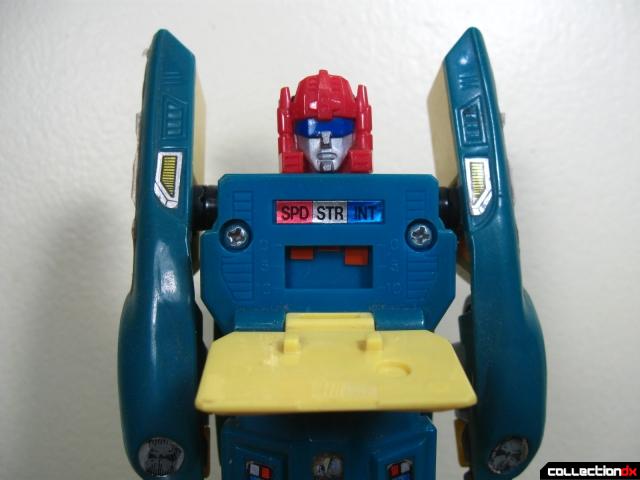 And Lug cannot beef up Nightbeat's body even though the tabs that stick out in head mode will produce a different readout if inserted into one of the larger Headmaster bodies. Some have suggested the simplified chest gauge was a late change to these toys before production. 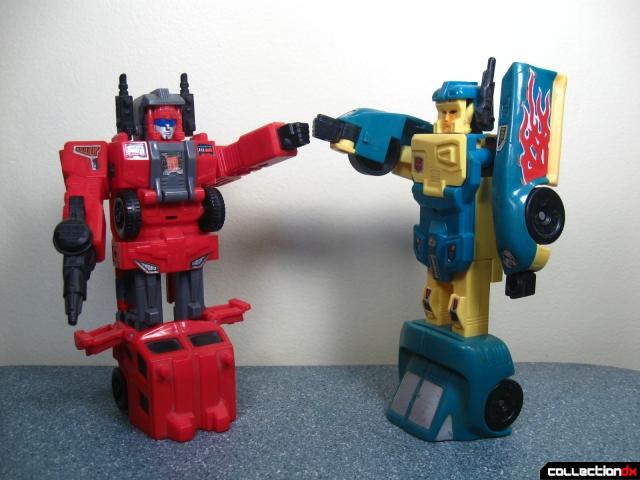 Hosehead and Nightbeat are the only Headmaster figures I own and both are from my childhood. At the time I had no idea there even was a Transformers comic so I was completely unaware of the latter character's amazing adventures as a hardboiled detective. Hosehead was one of Nightbeat's lackeys who didn't do much except screw up slightly less than Siren did. In the end he died with little fanfare. It didn't really matter to me that Hosehead wasn't in the cartoon as most of my Transformers were from this later era. He was played with and loved like any toy and as a credit to his build quality, survived it all in much better shape than my Nightbeat who in the process of making this review lost another bit of yellow plastic from a sensitive area.

In the grand scheme of this mammoth franchise, Hosehead is a rather unremarkable toy of an largely forgotten character who is only really known because of his proximity to the fan favorite Nightbeat. In Japan, the toy was used for the Headmaster Junior, Cab, who at the very least brought the design to life in an animated series. For me, Hosehead's true ability is to do something that none of my other old toys seem to do and that is to get me a little misty eyed when I took the time to really think about him for this review. Despite regularly revisiting my old Transformers from this period, there is something about this unassuming toy's persistence and ability to just be there that seems truly special to me. When I stop to think about it, I cannot even remember a time when I didn't have Hosehead. I may have grown up, chased down dozens of high-priced toys on countless websites, and become enthralled tracking the news of the latest and greatest out of Japan but Hosehead will always... just... be... there.

6 comments posted
great review, or have got

great review, or have got sick of hearing that yet? because i watch master force this guy will always be Cab to me.

Random guys like Scoop are getting Thrilling 30 Deluxe toys, so why not Hosehead?

IKR? Hosehead would make a perfect candidate for the Thrilling 30 toys and if they're pulling out obscure characters left and right, it seems fitting for Hosehead to be included (I also love that Waspinator, who's one of my personal favorite BW characters is getting made! :D)

I really liked the Siren Headmaster figure when I was 6-7.

That last paragraph was ALL HEART!
That is partially how I feel about some of my G1 transformers
Thanks for the Review