Jet Riser is one of three late-period Machine Robo powered suits from the Battle Hackers series.

Machine Robo was a brand in decline, but the Battle Hackers designs were among the finest mecha toys of the eighties. Bandai was hitting its stride just as Takara's Transformers were stagnating. If only America had gotten these instead of the misbegotten 600 series MR toys.

Jet Riser is one of two deluxe "Risers," featuring more armor than the comparatively stripped down BH-01 Power Riser.

Machine Robo packaging from this era is exquisite. The black background, bold yellow border, and dramatic toy photographs are unlike anything else, then or now. 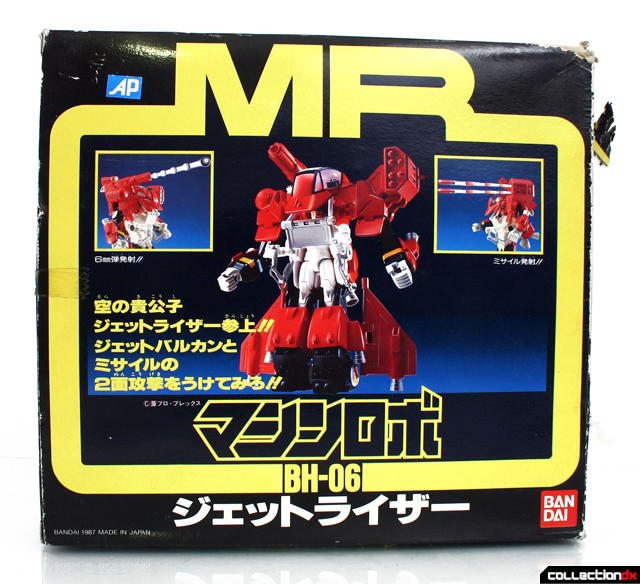 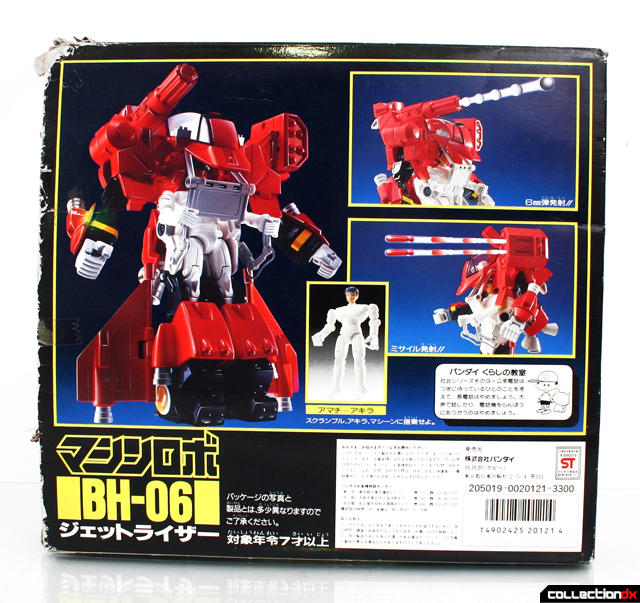 Jet Riser comes in a styrofoam tray with tons of accessories. Missiles and ball projectiles for the two shoulder mounted guns are included. 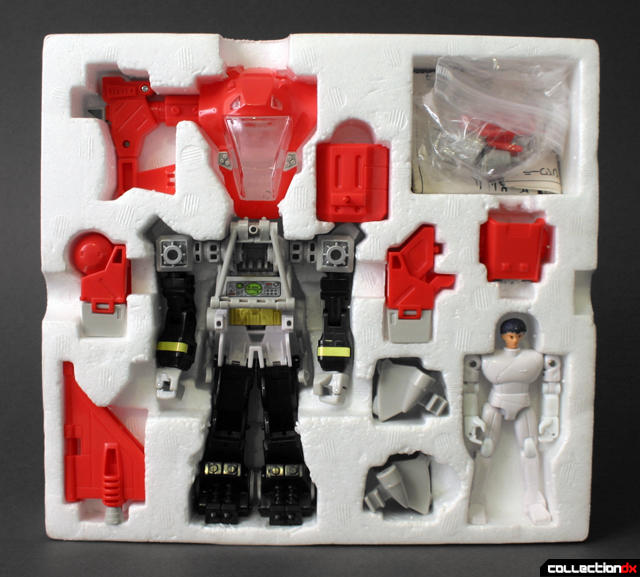 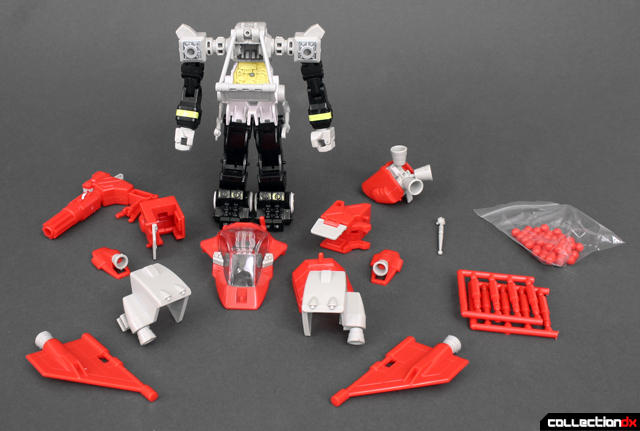 The riser pilot figures are reasonably detailed and articulated for the time, but nothing special. This guy has some questionable paint applications. 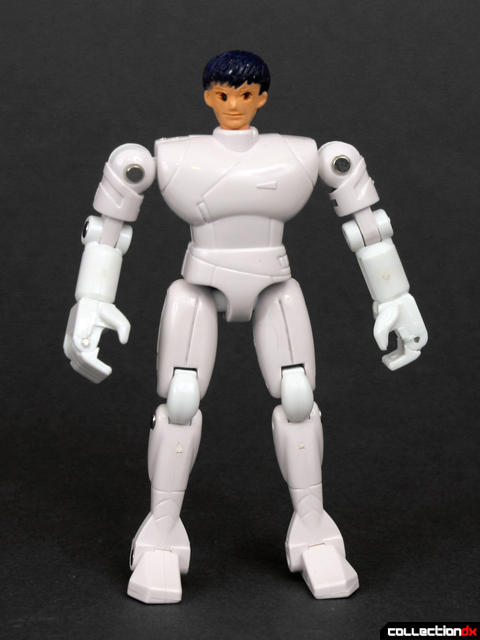 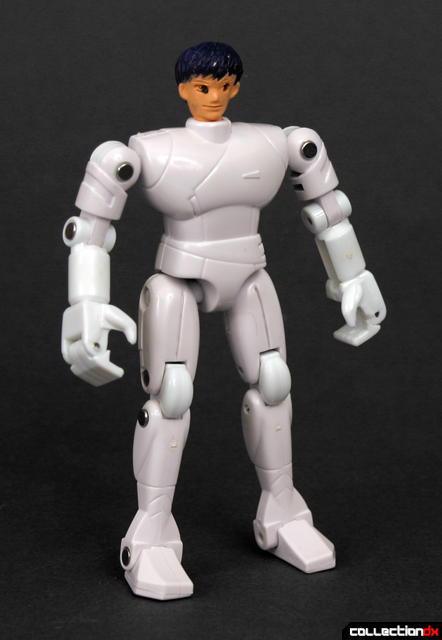 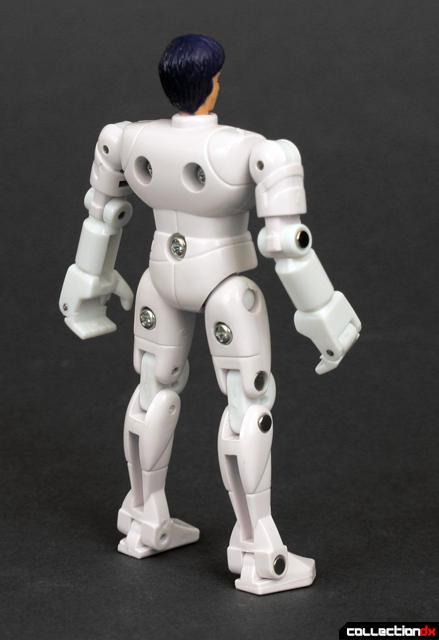 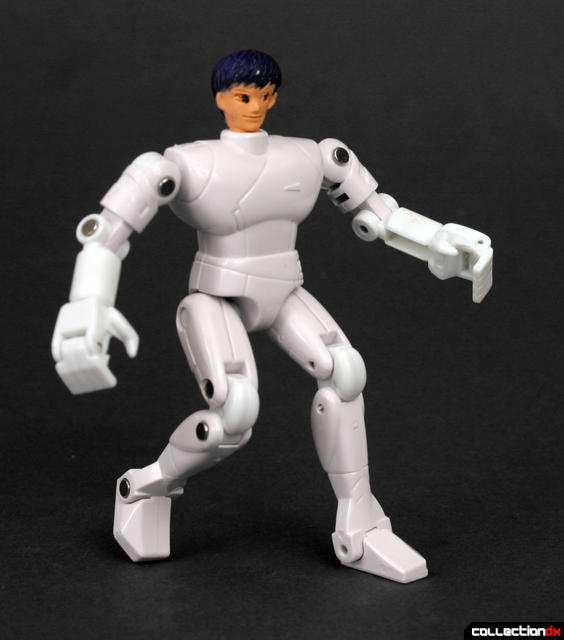 The base armor is fantastic. With the armor covering up much of the suit, Plex could've gotten away with a far more generic sculpt. 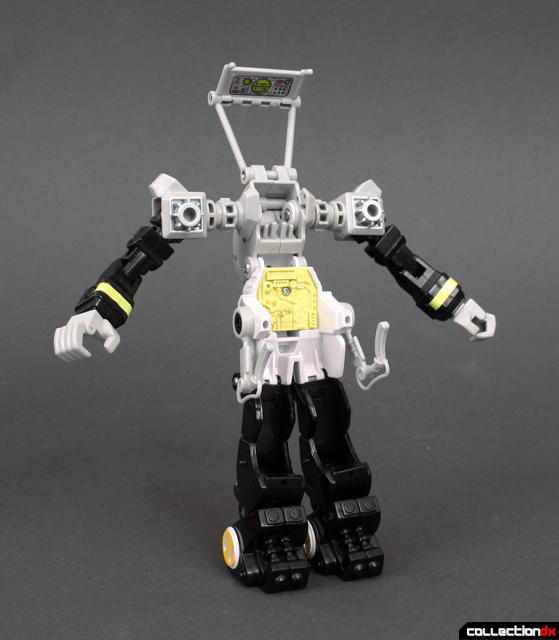 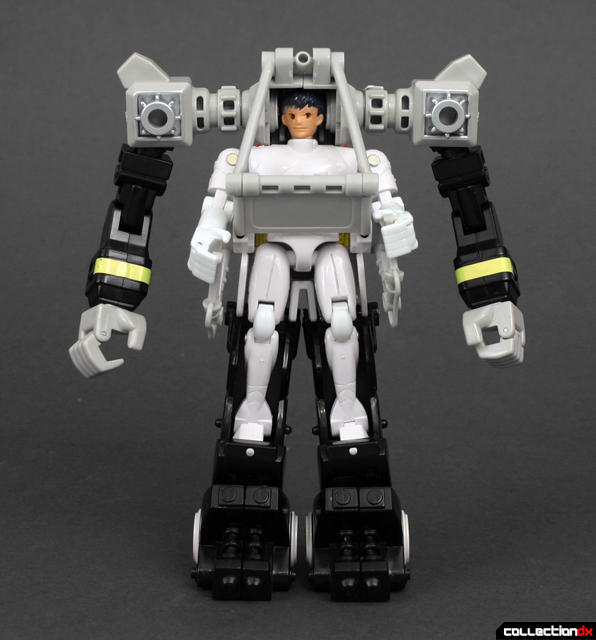 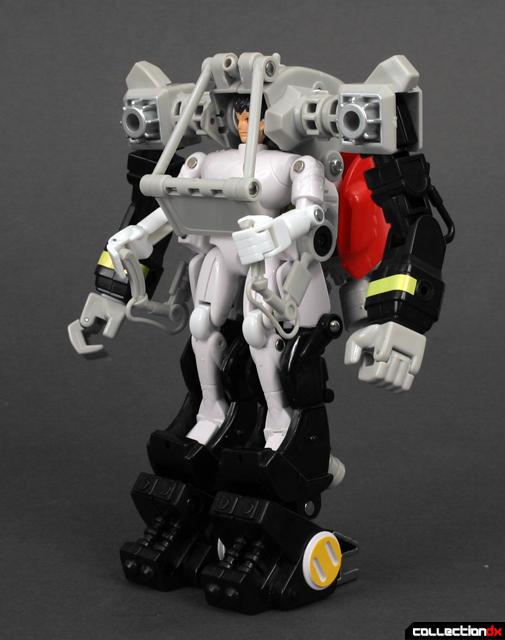 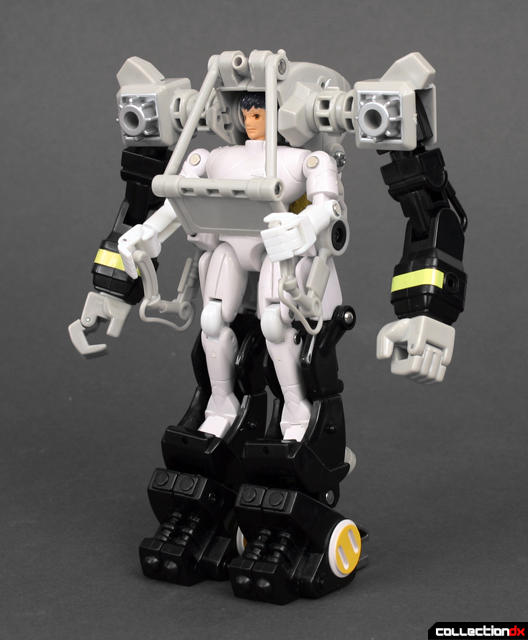 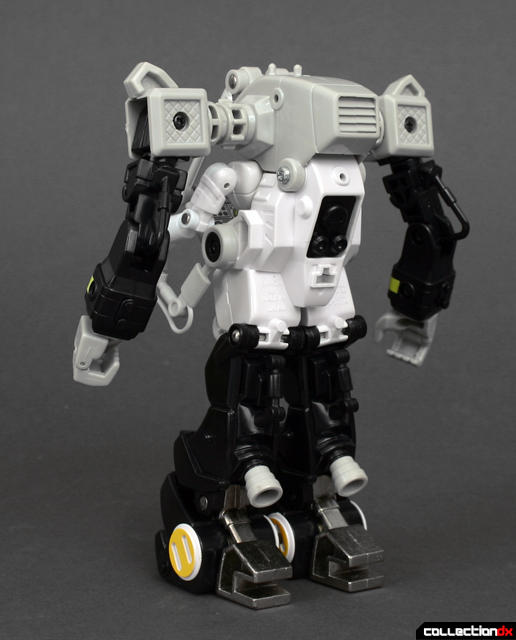 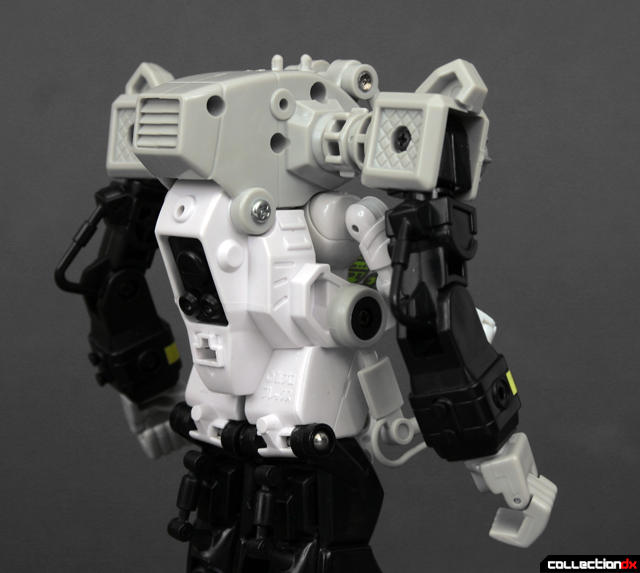 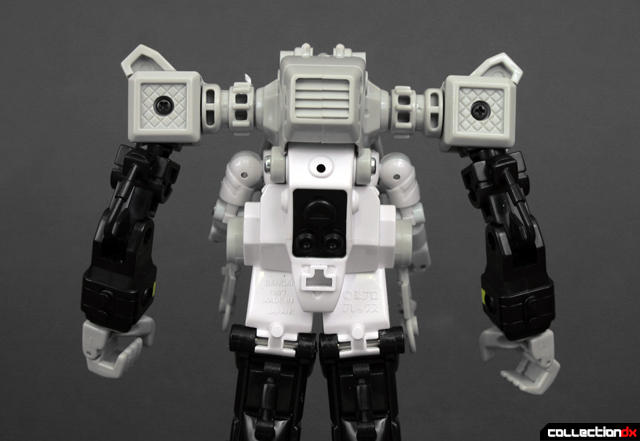 I especially like this mechanical panel behind the pilot. 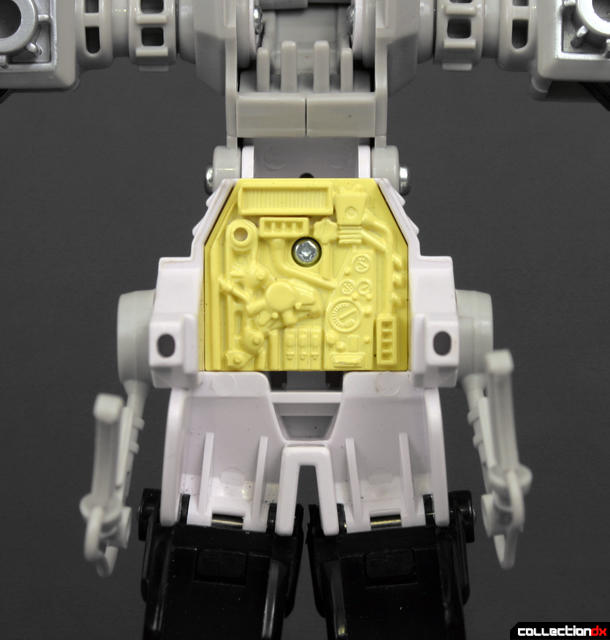 The fully armored figure is dramatic. The layering of components creates a real depth and sophistication. 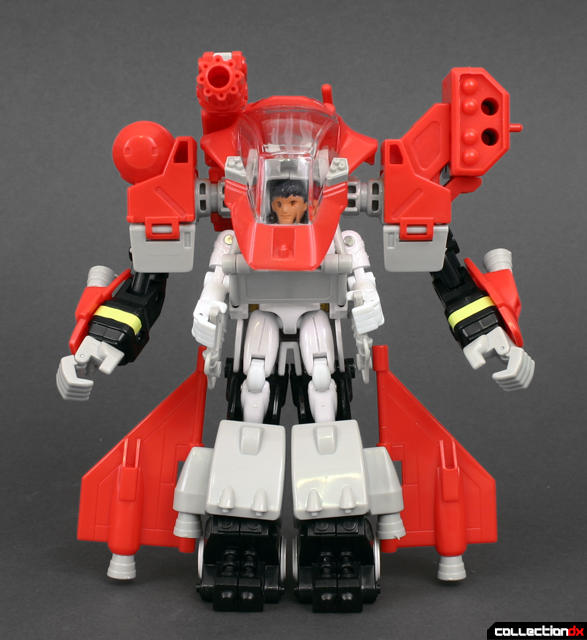 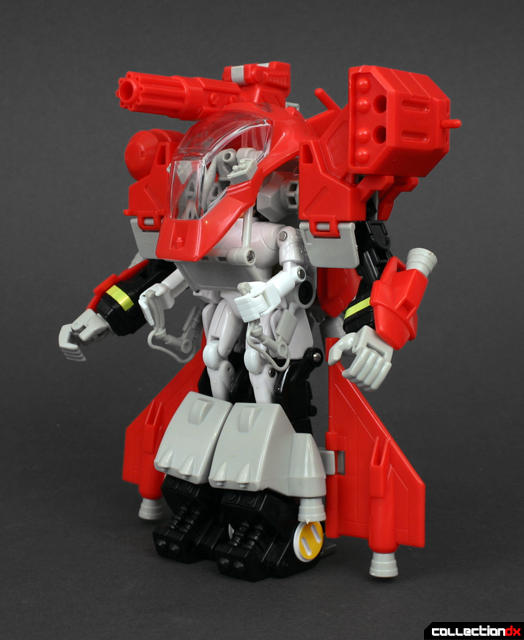 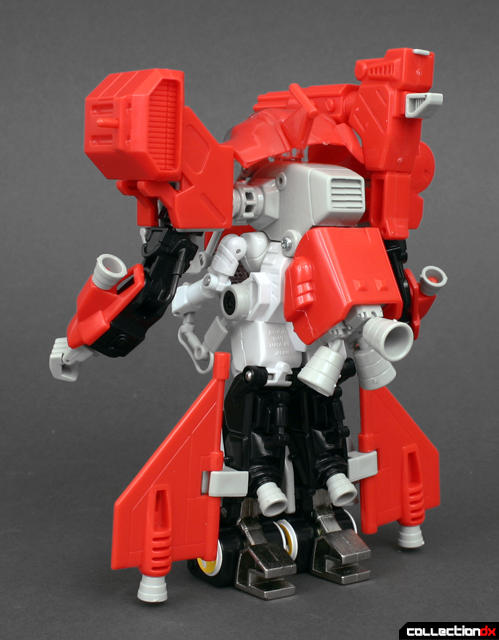 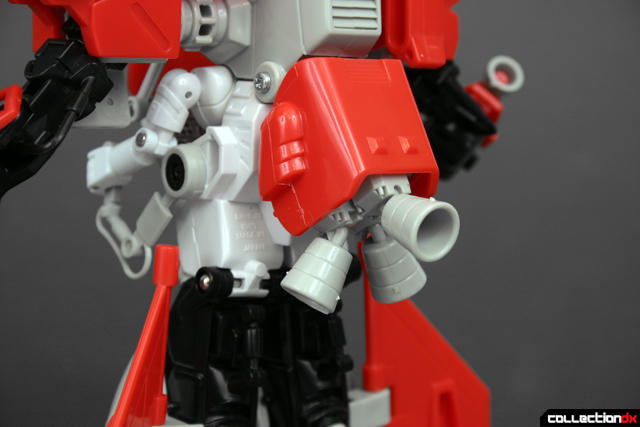 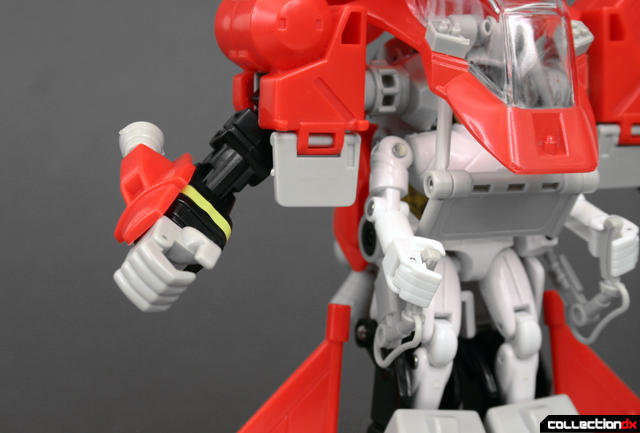 The arms have a good range of motion, but the legs are fairly static. 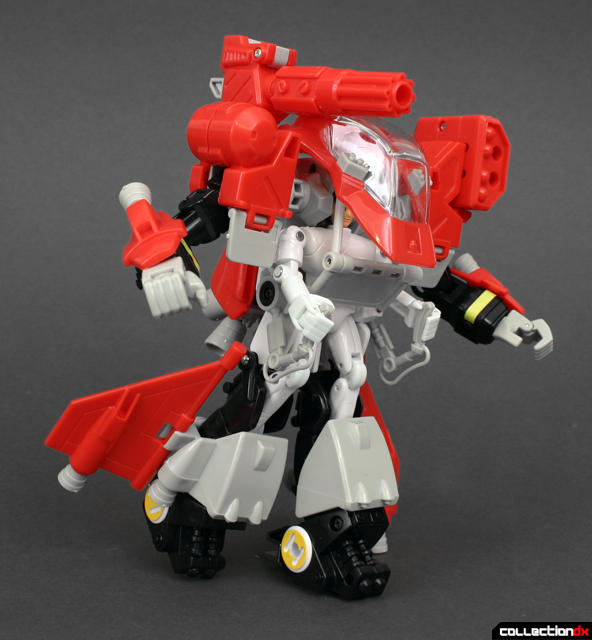 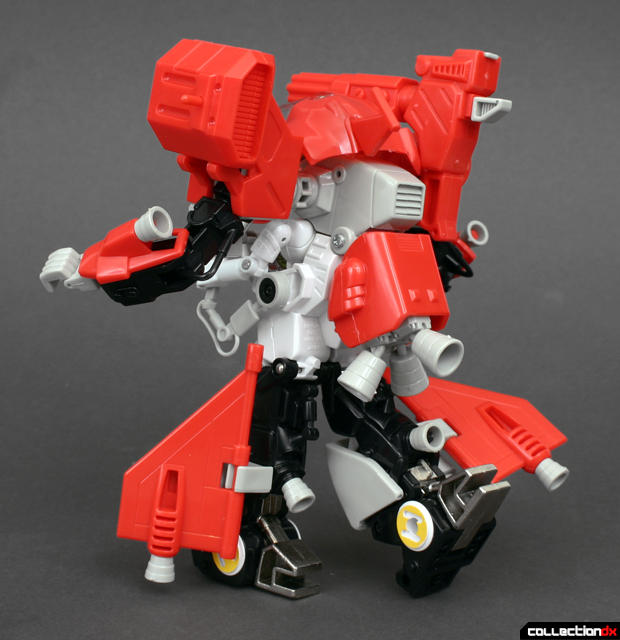 Most of the figure is plastic, but the lower legs are partially diecast. 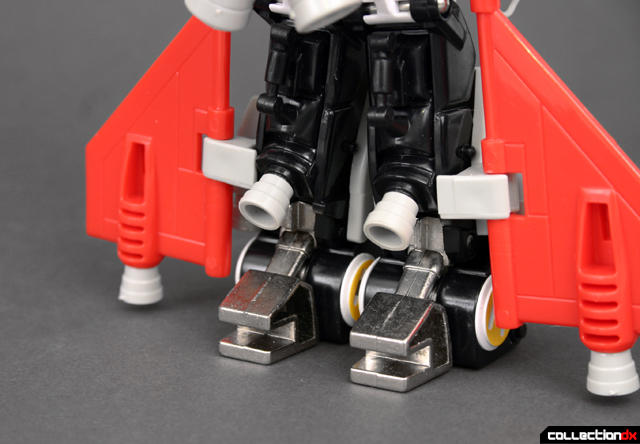 I can't recommend these Battle Hackers Risers enough. They are among the best realized powered armor toys ever made. 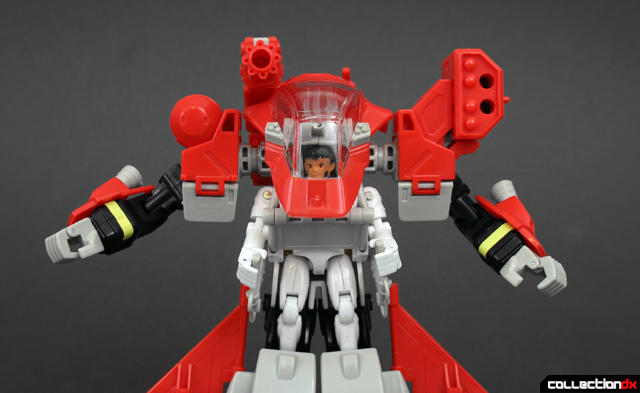 Was thinking the same thing, deffinatly could draw some lines for comparison.

what an awesome piece this is. those thrusters on the limbs, love that detail. you must show us more of that yellow one!

I've been on an exo-suit kick latey. the idea of a base frame exo-suit with interchangeable armor is something I've been experimenting a lot with Legos recently. Don't want to show off, but since it's relevant and I think you guys would like it, check it out on flickr! if anyone is a MOCer, I highly encourage you copy my frame design and put together one of your own!

I don't know, I think I like the Battle Riser better. There's just too much red up top with little to break up the lines on this one. Plus, I'll take pincer arms over extra elbow boosters any day of the week. Do you know if sticker sheets were originally included with this line? It looks like Bandai was going after some of the modeling demographic with these (like every other company in this time period).

Edit: After a quick glimpse across the internet, it seems that these guys aren't too bad on the wallet...just...need to...get through Christmas...

Where did you find? I haven't had any luck besides one on eBay for 200$
Of you don't mind, let me know where you saw for sale..
Demon_seed_22@yahoo.com

I just took a quick look at the current listings on Yahoo Japan. Looked to be quite a few going around the 3~5k yen range. You'd have to find a middle man, but that's a lot cheaper than 200 dollars.

I really dig the illustration style used for the cartoon. I never got to watch Machine robo. Maybe its time to track it down. We should had gotten this instead of the gobots show.

Thanks to him,we can finally see them. RAW.

I never get tired of that OP for MR Battle Hackers. Too bad the show will never get subbed (the only reason there's an encode for MR Revenge of Chronos was that an HK DVD was released).

So yeah,I've been watching the series for some time now. Akira Amachi here is your typical rash,brazen shonen hero for mech anime. We've all seen it from Gundam from Amuro to Kamille to Shinn Asuka but where these guys get a lot of time for development,I feel Akira's (insert your Akira reference here since he gets to ride a bike named Twin Cam Jimmy later on as a reward from ep. 8) character development is quite nice and he doesn't come off as a whiner..most of the times. From the first episodes,he was the first to wanna make a difference in ep. 6 while the Good luck kids were expected to take refuge in a hotel but in ep. 5, that proved ineffective because of spies lurking around the area.

Ep. 7 is where both Mia White and Patricia were questioning that they were being sidelined to wait for the war to end and not being able to get back home to Earth. Funny that this contrasts to TF where the Autobots need to find energy to get back home while also stopping the Decepticons,the kids of Good luck are stranded on an alien planet and THEY have to get back home since the Electronic Planet B-1 is already looking like its seen better days.

Akira himself is pretty much brash and impatient kinda like the Battlehackers but later on after ep. 8,he feels like he has been integrated into the ranks of the Battlehackers. The Battlehackers are more like shock troops or the guerilla force which is pretty interesting considering this is a kids show but then again,Revenge of Cronos has a lot of robo gore and violence so yeah,this one was more of 'You die once...GAME OVER'.

Though throughout the series,we do get to pay attention to select members here and there because there are many of them. Akira does team up with the likes of Mach Blaster,Garzack,R. Jettan,his bud Luke Stewart,F-1 Jack,Twin Cam Jimmy,Jet Winner Robo in ep. 13 where the Jet got a new head and the goof ball of the kids - Zen Ogawa and also Mia White (who I feel was underused out of the Good Luck teens).

At least Akira ain't angsty like a LOT of mecha anime shonens out there. He's funny at least and has some goofy expressions to boot. Overall,he ain't bad. The toy...I'm gonna get it near the end of this year,baby!