Despite being a member of the evil Darkling Lords, Cindarr had a love for animals and would refuse to harm them and even stopping mid-battle to save an animal.

He was the most unintelligent character in the show and was voiced by voice-over legend, Peter Cullen. 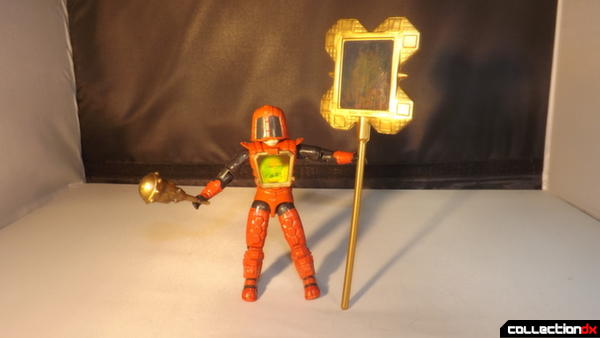 Cindarr had the chest totem of the Gorilla, for his climbing in Merklyn`s tower (i'm not sure gorilla's are known for climbing, but oh well).

The hologram on my figure is a little damaged, like many Visionaries holograms still around, but you can see a little green angry ape. 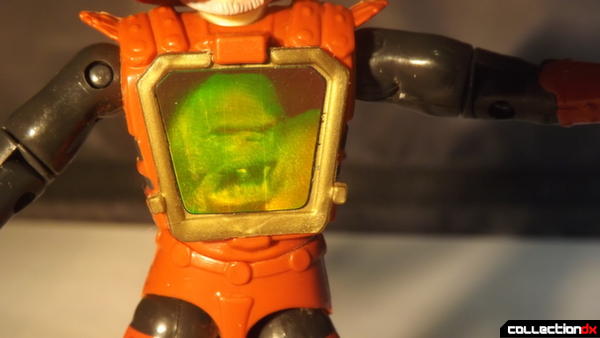 His armor is a nice orangey-red colour over black, the shoulder sections have almost spike like bumps on them, you can make out something that looks like a belt on his waist.

I like the hexagonal design on his thighs, it gives him a bulky look, ideal for the stereotypical strong man character. 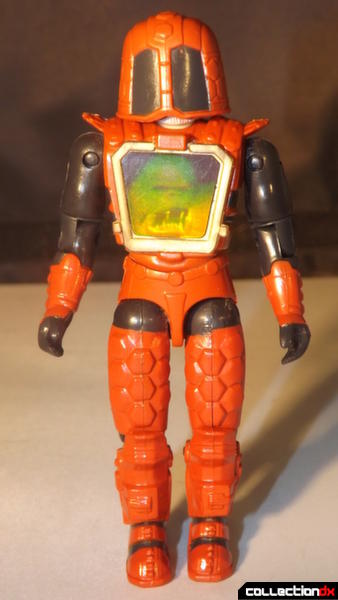 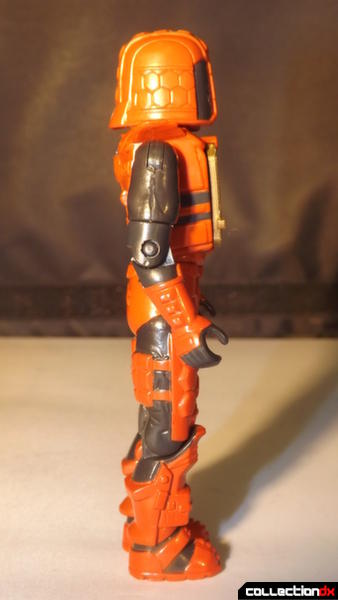 From behind he has various tech detailing on his back and what looks like two black tubes leading up to his neck.

And the Hasbro copyright on his bum. 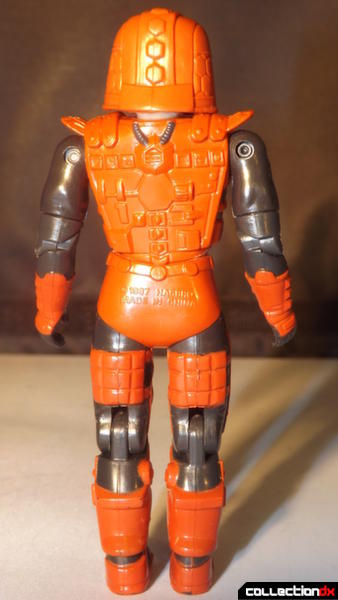 Cindarr was one of the eight with a power staff, his was Destruction called forth by the incantation -
"By nature's hand,
By crafts, By art,
What once was one,
Now fly apart!"

In the show it was a giant green ogre/orc/troll creature that would destroy walls and castles, however it did have a time limit on how long it could be summoned, afterwards the staff would need to be recharged in Merklyn's magic pool. 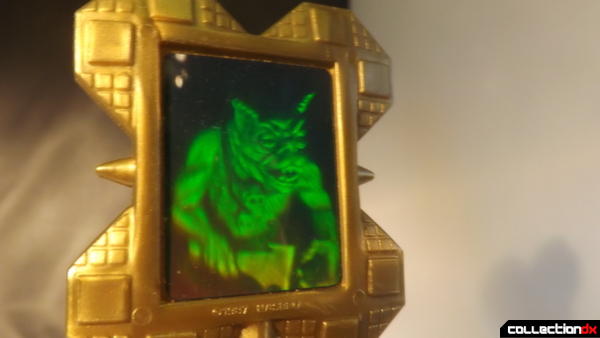 For accessories Cindarr came with his gold staff, a helmet and a golden club. 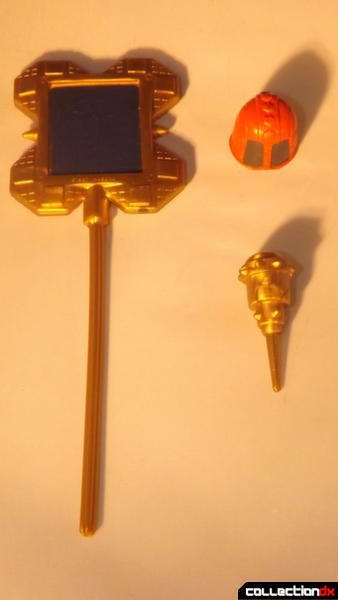 As i've mentioned before the Visionaires helmets are very much like M.A.S.K., most of them fit securely over their heads, Cindarr's is quite bulky and has two big blue panes on the front.

Out of all the helmets in the series, Cindarr is the only one to have his helmet visor coloured. 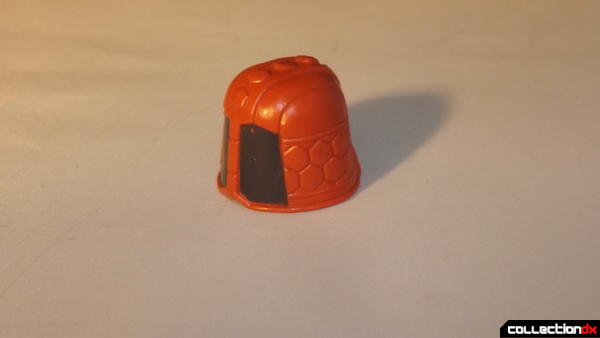 The club is pretty basic, the handle comes to a blunt point at the bottom.

There is a kind of line patterning around the middle of the club, I think this is intentional but I can't be sure, I like it though.

The figure sometimes has problems holding the club as it will slip out of his hand, it's a case of pushing the club as far into his hand as you can, or posing him holding it up. 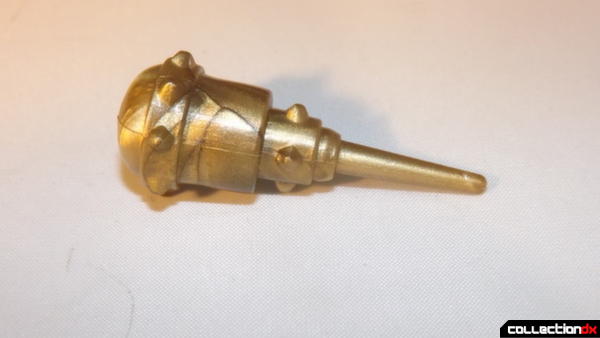 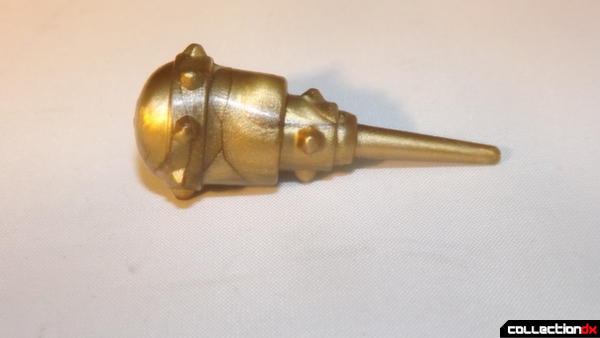 Under the helmet you get a frightful grin-scowl, behind his grey beard and comb over hair. 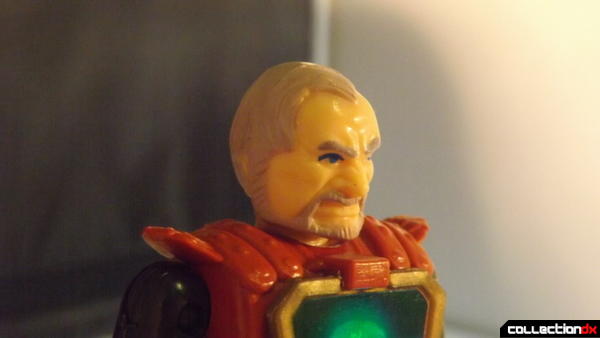 Cindarr is as articulated as all Visionaries, keeping the GI Joe poseability.

In the 80's having a figure with more than 5 points of articulation was a revelation, you 90's kids don't know how lucky you were!

However, the lack of foot joints sometimes makes posing difficult. 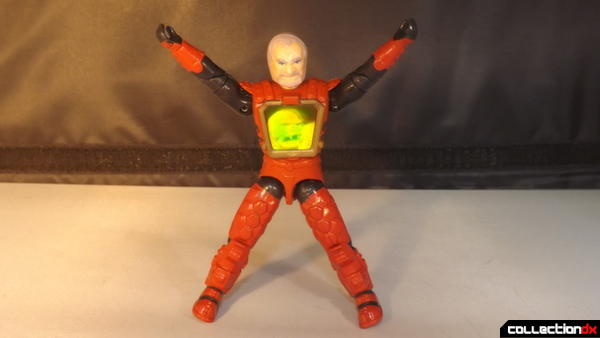 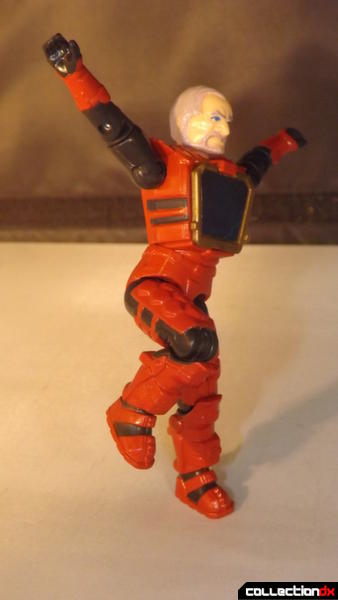 I have the character bio from the back of the card giving a little information on him, missing out his love for animals and like Mortdred, he has glowing red eyes in the character art.

The artists knew these characters were all human right? 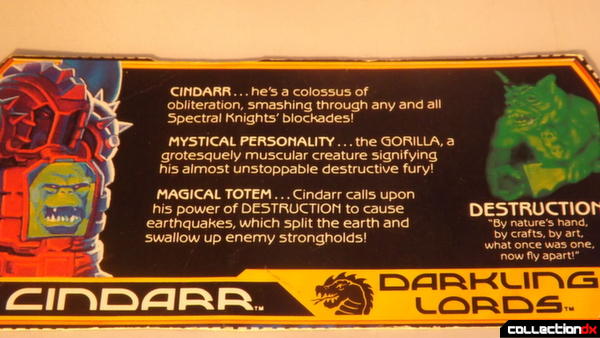 Cindarr for me is one of the more likable characters, seemingly only aligned with the Darkling Lords because he doesn't know any better. 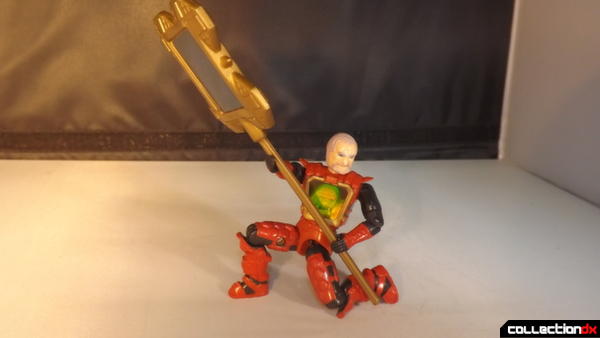 4 comments posted
Cindarr was the last

Cindarr was the last Visionaries figure I bought when I got back into collecting in 2004. I never got around to completing the set with Mortdredd and the Sky Claw.
''Horn of Unicorn, claw of Dragon'', was a good episode with Cindarr and Lexor.

i might be selling my skyclaw with mortdred, i did a review for that set last week if you`re interested?

Tempting LOL, but no thank you. I have given up collecting and haven't added anything to my collection in about a year......also if I got Mortdred I would have to try and get all the others back for the complete collection. I seen the Skyclaw review.

"In the 80's having a figure with more than 5 points of articulation was a revelation, you 90's kids don't know how lucky you were!"

Micronauts and Microman (which GI Joe ARAH borrowed their articulation design and scale from) had MORE articulation than any of these during the 70s and even before Star Wars came along,, thanks to Takara's toy inventor Iwakichi Ogawa, creator of the "o-ring" and 3 3/4" (or more precisely, the 10cm) action figure format back in Japan in 1974 (resized and redesigned from the Hasbro 12" GI Joe-based Henshin Cyborg series, so it goes full circle, too!). Five points of articulation? Well let's see...

The rotating cuffs are somewhat redundant as they are used to attach the ball joints to the limbs but even if we don't count those, we're talking 16 points of articulation on a 3 3/4" series of figures from the SEVENTIES. :D