Prepare yourselves for a series of reviews about some of the oddest toys I own. Prepare for the Sacred Beast Legend of Bioroid!

Who can forget the legendary battles between the Heroic Trianforce and the Evil Deltaforce? Or was it the other way around? Either way, it doesn't matter, because these odd little toys never made it to the states. These third-string transformers were made by obscure Japanese toy company HERO, and were a rather unusual take on the transforming toy genre.

Each toy in the line features an animal mode and a human, beating out the Animorphs by about 10 years. Lets take a look at a member of the Deltaforce - Asurah.

Asura is the Commander of Deltaforce. He's the evil leader.

The Bioroid boxes are pretty great, almost misleading. The art depicts a much better toy than whats actually inside. 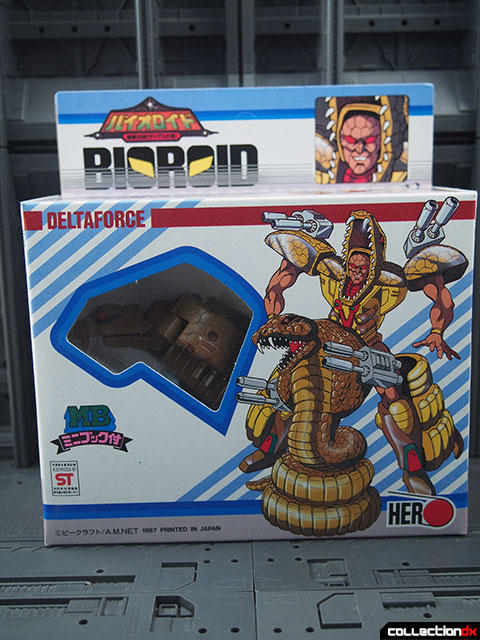 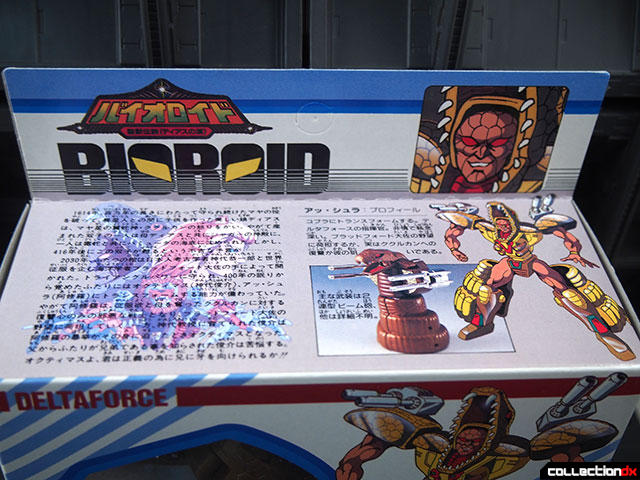 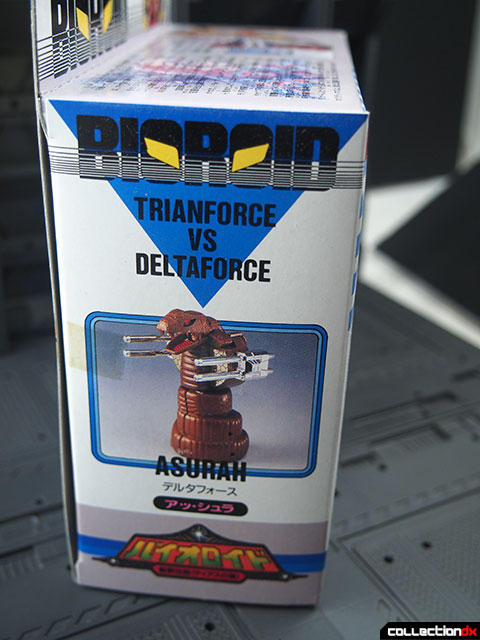 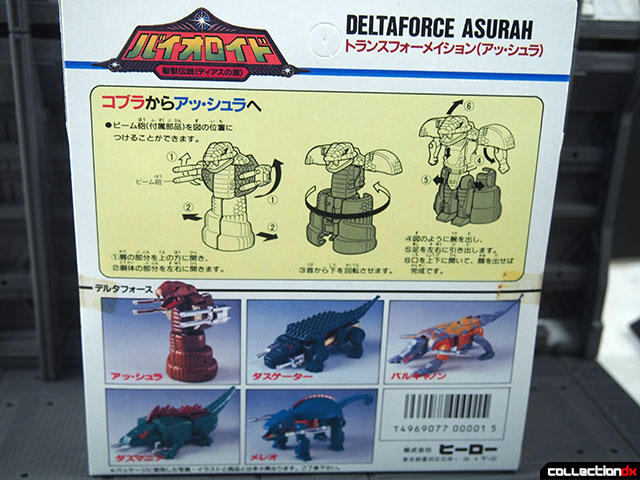 And what is inside? An odd-looking battle cobra. It's more like a representation of a cobra as depicted as an ancient idol. It's got an opening jaw and lovely chrome stickers on either side. 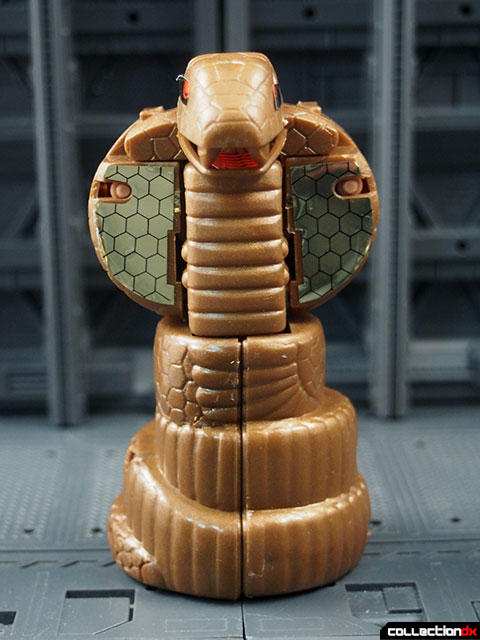 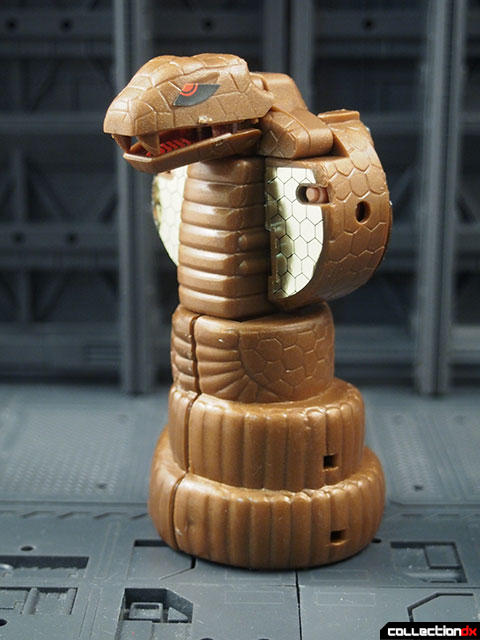 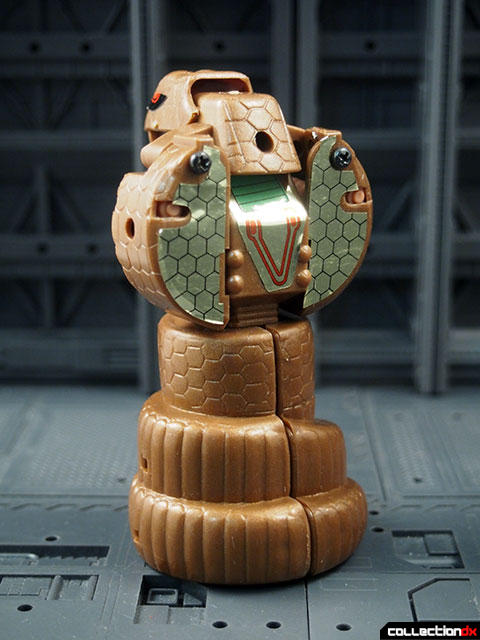 The all-plastic snake is light and the seams are ill-fitting. Adding chrome weapons to the sides turns your ordinary snake into a vicious battle cobra! 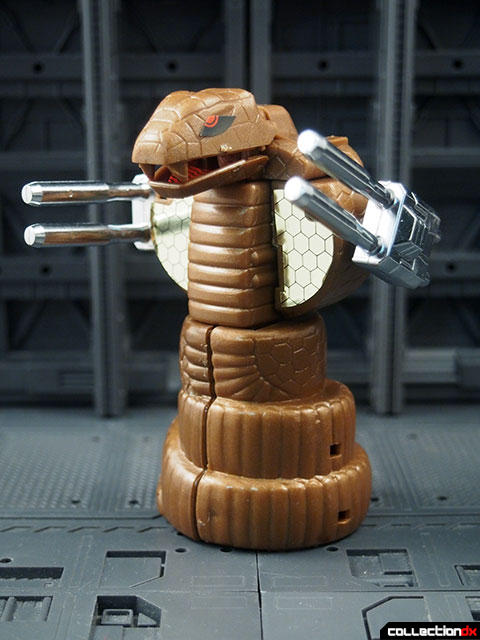 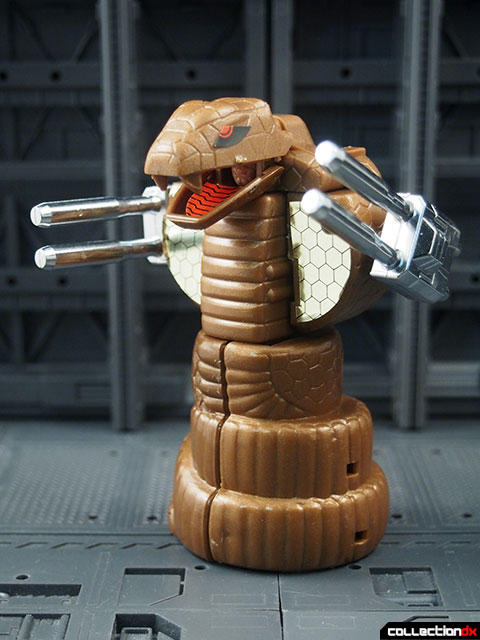 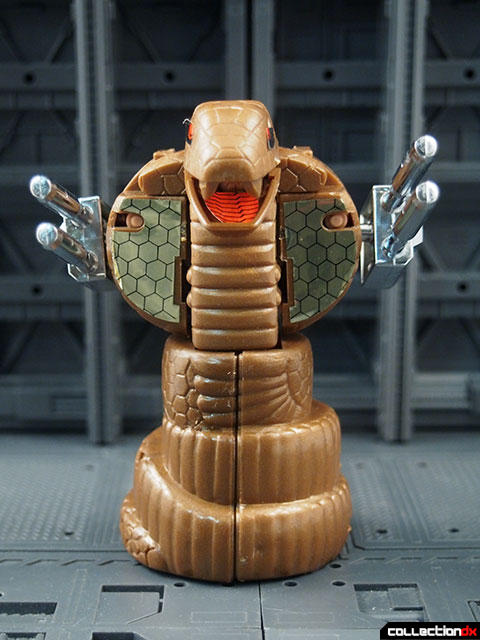 Humanoid form is rather stupid looking. Panels don't really move out of the way enough and it ends up with pieces of the snake shell limiting movement. Stickers are mis-aligned. 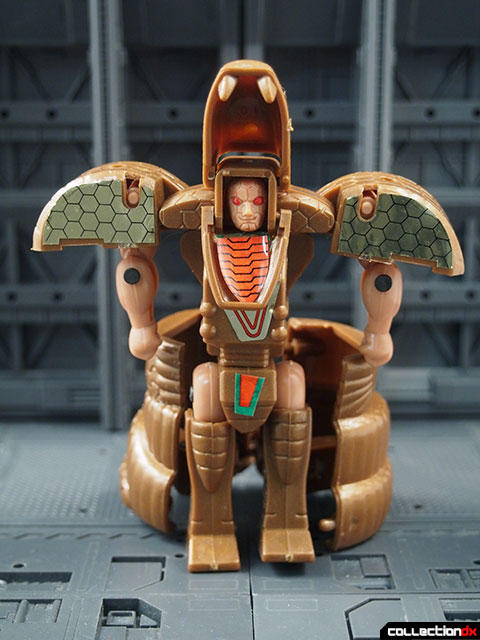 I mean, look at this thing from the back. 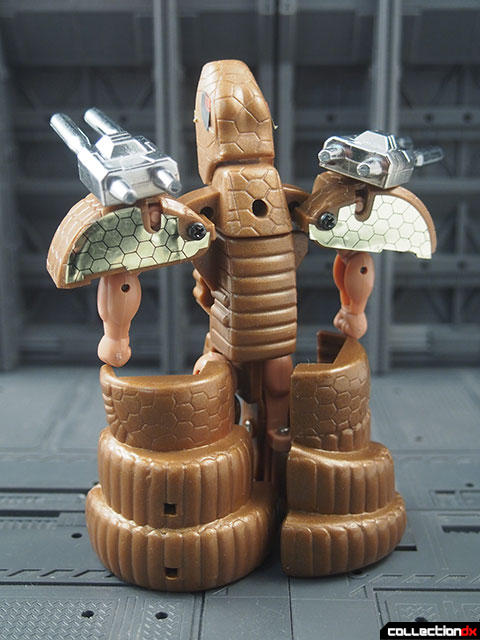 I do love the fact that it is in fact a humanoid head, making this some kind of half-human half-robot hybrid (that turns into a snake). 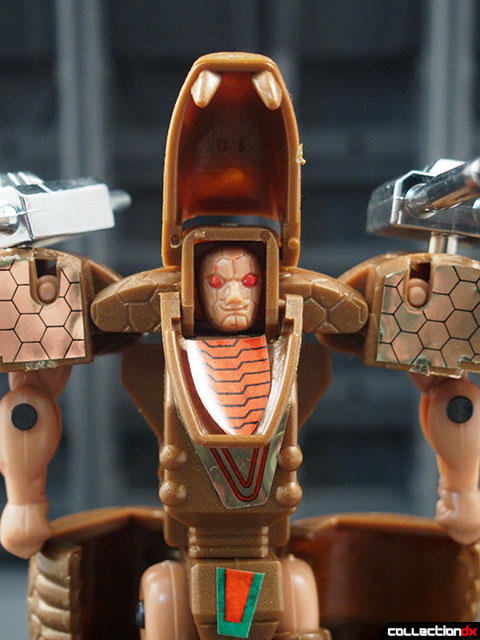 Really, it's just a weird concept with poor execution, but I can't help but be interested in it. What were they thinking? 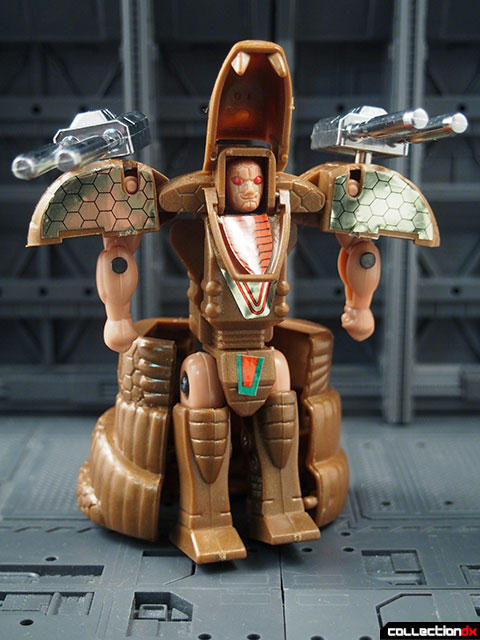 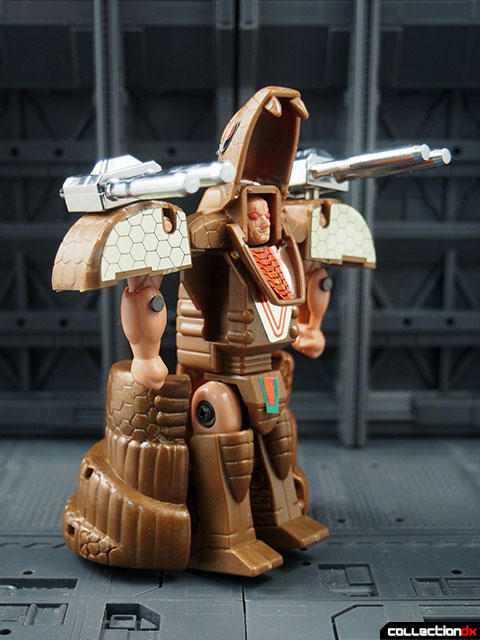 The Bioroid line had 10 toys released out of a total 18 planned and shown in the catalog. Each character has a backstory, bio, and statistics. If you know Japanese, you can figure out the 400 year old curse, and how Asura was awoken in 2030 by archeologists.

This guy looks cool and he's as old as me!

I spy some reptile robots on the box.

Those other 4 guys did get released here in America.

I have all but the alligator.

They used to sell them at KB Toys in the big metal 3 for $5 bins.

Man, there's so many oddball transforming toys and robots that have totally passed me by. I love this thing! Looks like a Serpentor robot. Like....Serpentrobo.

Yeah, my first thought was of Serpentor as well! And Serpentor did debut the previous year...

...poor execution as you say. That box art is great, and even the snake mode is alright. But the humanoid is the weak part. At least he looks alright from behind. I don't know how likely it is to happen if this line is obscure, but it'd be cool to see a modern take with quality design. They could reuse, keep the box art. Just make the actual toy look like it.

Here's a Japanese site that has all of them.

I collect these toys with a passion!
This is really cool to see you have one! I don't see many of these around let alone the whole Trianforce or Deltaforce toy line which is why I love to collect this toy line!
I like your review on the toy and agree on it, it has many drawbacks that you pointed out already and also there is a interesting thing about his legs. I have a Japanese toy magazine that shows photos of Asurah's legs displayed extended down more to make him taller which looks much better in my opinion so he doesn't look a bit oddly stumpy but the only way do this is you can unscrew the small screws from the inner leg parts and totally dismantle them but it will effect his balance to stand properly unless you get him balanced right by adjusting his lower king cobra parts around the sides and this is kind of risky too if you don't want to harm the plastic since its brittle. Now speaking of those parts my left hinge screw came loose to the point it just slides off if you move him around to the sides or upside down enough which is a drag since the right one is perfectly fine and tight.
Another issue I had was my right side hood holes for the right weapon accessory doesn't fit in the peg hole due to the size not being correctly the same measurement as the right weapon accessory peg which results me having to put glue tack to hold it.
Same goes for the stickers, either they have been so old and worn out that caused them to slightly peel off on the edges or they are simply just low quality stickers which seems to be the case with majority of all the ones I've got and guessing with mass production.
Otherwise there is still many good points about this toy and the whole toy line itself. What I really like about it is they were made in the 80s with old school style packaging, designs I really love, for the most part they did some the alt modes that we didn't see in transforming robot toys in G1 style, and it's fun to have atleast one or collect the rest since they do have profiles and a story to the toy line which gave it more life.

May I ask where you got your Asurah from?

Thank you for sharing this, glad to see more people like you know and own these toys!

Even though the alt mode looks less like a cobra than a cobra's head jammed on top of a tightly coiled turd, that box art is worth the price of admission. Somebody should hop on a reboot of this. Get on it Fansproject!