The Jewel Lords are a subset of the Rock Lords, themselves a subset of the oft-maligned Gobots, or Machine Robo toys in Japan. Despite an impeccable Popy pedigree, these toys are little loved, at least in the States. It’s true that the line had its disappointments, but there were terrific entries as well, such as the Jewel Lords. 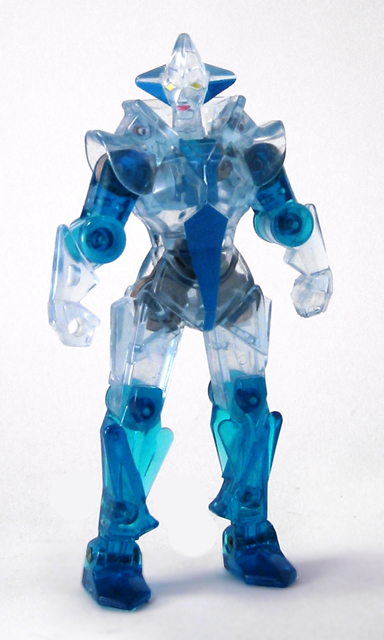 As Machine Robo wound down in the late eighties, Bandai lost its damned mind and introduced the Rock Lords. The Rock Lords are baffling. What appeals to me about transforming mecha is that something inherently cool, a robot, becomes something else which is cool, say a gun or a spaceship, using the same mechanical vocabulary. The Rock Lords, however, aren’t robots at all - they are living rock-monsters. But hold on! These living rock-monsters, as if by magic, can transform into…ROCKS. That’s it, rocks. Becoming a rock solves nothing. It’s not productive, fun, scary, or cool. 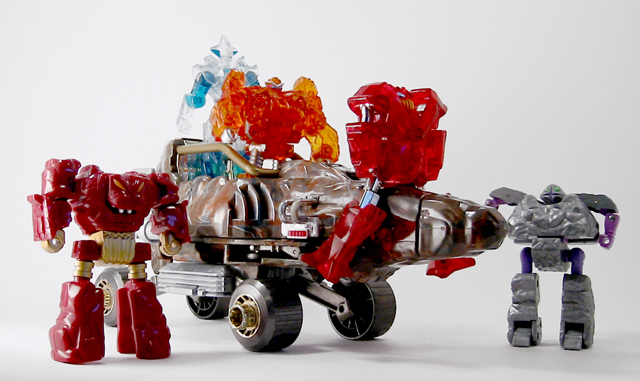 That being said, I love the Rock Lords. They are surprisingly good toys. Many have decent diecast content, and the transformations are inventive and sophisticated. The figure modes are mostly attractive, really embracing the alien/monster aesthetic, not unlike the MR “devil” foes before them. Rock Lords are more substantial than the typical, first-wave (or 600 series) Gobots, really durable and 4” tall. The Jewel Lords were a late entry into the Rock Lord pantheon, and switched things up with translucent plastics. Their alt-modes are crystalline gemstones. Other than late-period scarcity, one can’t help but speculate that the sales of these were impacted by the vaguely feminine quality of the toys. There is a distinct My Little Pony/She-Ra vibe to these. No matter. The clear plastic over metal aesthetic is beautiful, evoking Henshin Cyborg and Microman. Each of the Jewel Lords is solid, well detailed (painted screws!), and fun to hold and play with.

Solitaire, or Diaman in Japan, is of that rare species, the female robot toy. She is cast in two shades of blue translucent plastic, with chrome diecast inner mechanics. Her head has paint apps at her horns, eyes and mouth. 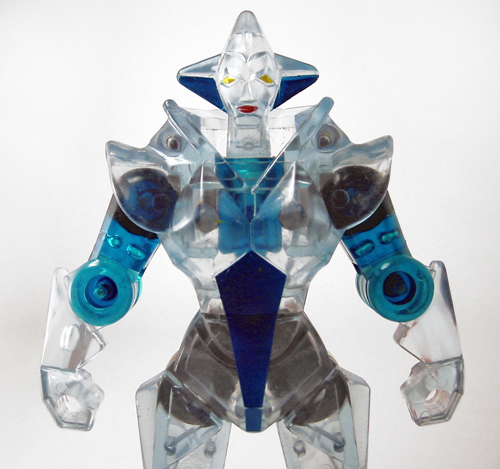 I believe the lipstick was unique to the American market. She has a decal on her torso resembling a bathing suit or costume. Her only accessory, a dull gold sword, is missing from this specimen. While Solitaire is technically well-articulated, her joints mainly exist in service of the transformation. 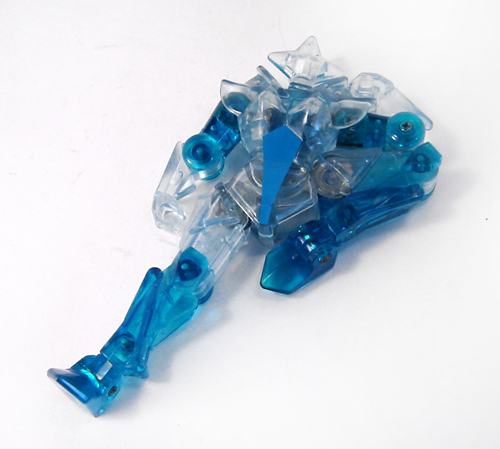 Many of them only move laterally, making the figure relatively static and incapable of interesting poses. The transformation to the diamond alt mode is simple and intuitive; you just fold up her limbs. The diamond, while an attractive object, suffers from the inherent Rock Lord flaw in that it doesn’t do anything. It feels more like a puzzle than a proper transformer. 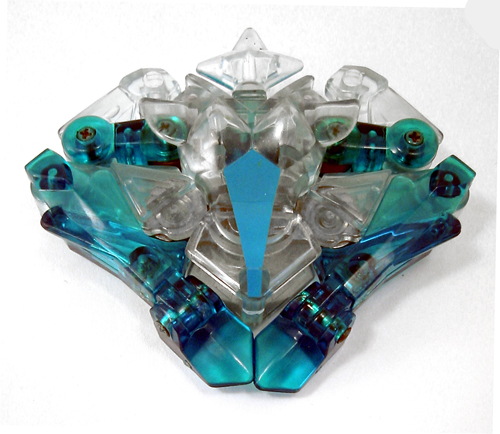 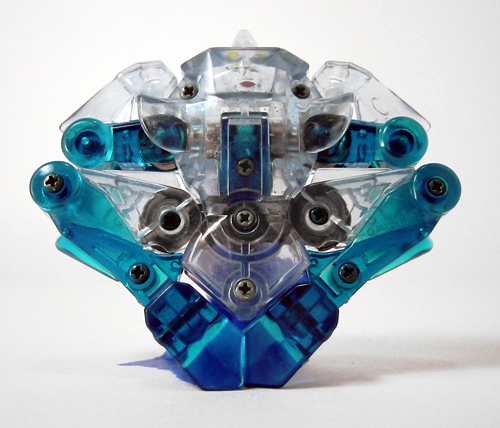 Solitaire is a great piece and a unique addition to your shelf. She can display well with other Jewel Lords, Rock Lords, or other lady robots. I would expect to pay anywhere from ten to forty dollars for Solitaire loose, though prices can vary wildly. She is generally considered to be the most desirable of the Jewel Lords, though the most common. 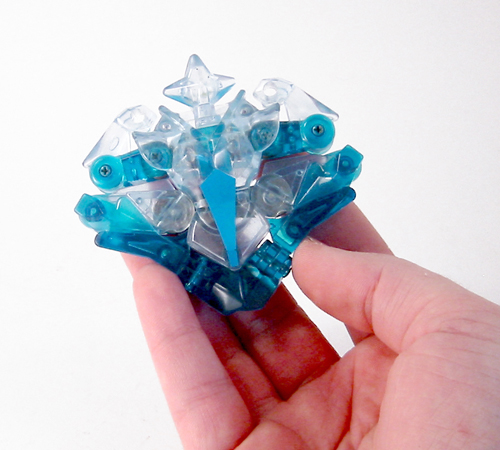 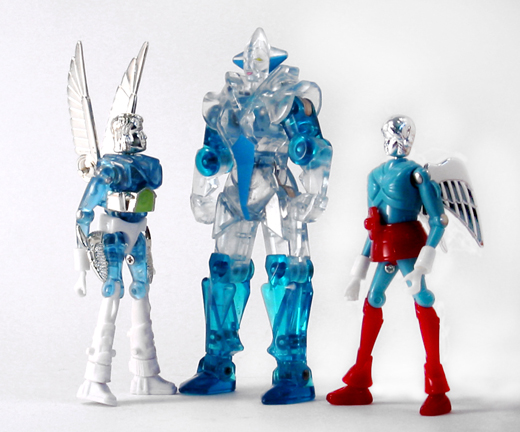 Great review! Awesome photos and I love the esoteric choice of subject matter. I must admit, when I was a kid I thought Rock Lords were cool as hell. My child's mind would use them as spies against other Transformers. I mean, who suspects the rocks?

Wasn't there another girl in the GoBots line? Crusher or Crasher or somesuch?

I's funny,typically one of the things you would want in a vintage robot figure is diecast metal,and you'll often hear people complain that today's Transformers are all plastic,but here's a case where the toy would be better without the metal! I mean,you've got a big diamond with a metal core?

There were a couple of female gobots in the cartoon. Crasher(?)was the black racecar, but the toy she was based upon was not feminine in any way. There was another female rock lord, whom I covet.

...I went on a weird Rocklord-buying binge.

THIS was the one figure I just could not get.
I saw one, carded at a place that used to be in Clifton called The Outer Limits, but like most of their vintage action figures, she was an arm and a leg (which is funny, because most of their new Japanese toys were well-priced).

Yah, some of the Rocklord faces were butt-ugly. It was nice that there was a chick in the mix that didn't look horrible.

"There was another female rock lord, whom I covet."

Aside from Solitaire, I never did manage to get the Japanese or UK transforming dinosaur combiner before my interest had faded.

The other female rock lord is Saberstone, and she was one of the last two rock lords released. I want that dinosaur combiner, but it's always too much.

I just found a Rock Lord at the thrift store about a month ago and I forgot about that line of toys and the feature film that went along with it. As much as I didn't like the line I do like this figure for all the reasons stated. Very cool that you own one, you seems to have all the figures I never got! ha ha

I love clear as a gimmick for figures and that fact that it's a not often produced female figure really is great.

I, too, liked the Rock Lords when I was little. Shows ya how much taste I have! :P

Nah, but this is a cool piece. Never got into the Jewel Lords, but I always admired them from afar.

and now I'm reminded that I need to sneak over to ebay and load up on Remco Crystar figures and accessories before one of you toy hipsters beat me to it.

I DID pick up some bright orange (not clear) Crystar magma enemy off eBay a few years ago though.

And yeah, it was when I was going through the Rocklords phase and was remembering other clear-figured toy lines like Jewel Lords.
: p

Solitaire seems to enjoy hanging out with Pharoid and Alice, I think as much as the rock lords were rather dumb, they do fit nicely around Microman/Micronauts and Henshin Cyborg action figures ^.^