Oh Matchbox! You had a great opportunity to make some cool looking GI Joe / Star Wars type action figures and you dropped the ball completely. 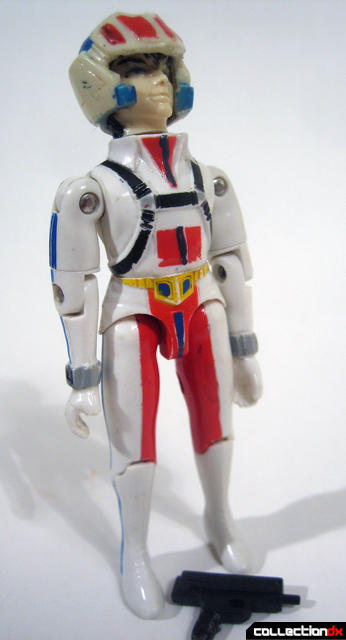 I remember when I first saw these Matchbox’s figures. My dad and I were shopping at the K-Mart that used to be in Montclair, CA on Central Ave but has since been torn down. Is was roughly 1986-1987 and going to K-Mart always netted some good anime VHS bargain cassettes such as Tekkaman The Space Knight and Voltron. There always seemed to be something anime-related stocked at this store. 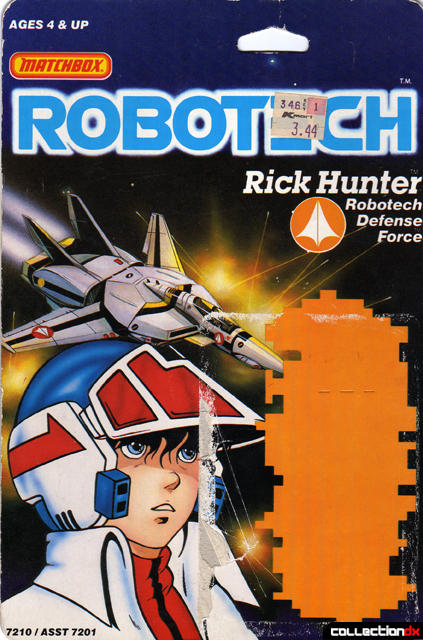 K-Mart must have just put the Robotech figures on the pegs as there was a small crowd of kids around them, me being one of them. I first thought it was the greatest toys ever. Finally some toys from one the best cartoon known to man. I thought the card artwork was a little soft and obviously traced from other artwork but it was something I was used to being a collector of the badly drawn Comico Robotech Comics at the time. 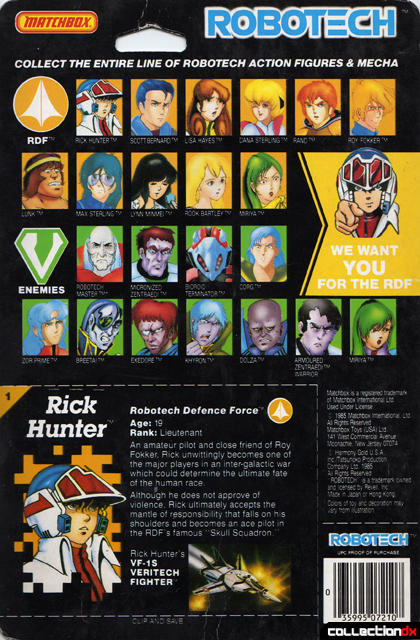 My Dad bought me three figures that day. This Rick Hunter figure pictured in this review, Rand and, lucky enough, the very rare Black Miriya. I still own all three figures to this day. (Thanks Dad!)

Only 22 Matchbox Robotech Defense Force figures were released and no second series of figures were ever developed or released. Rick Hunter was figure number "1" most likely due to his iconic position in Robotech. 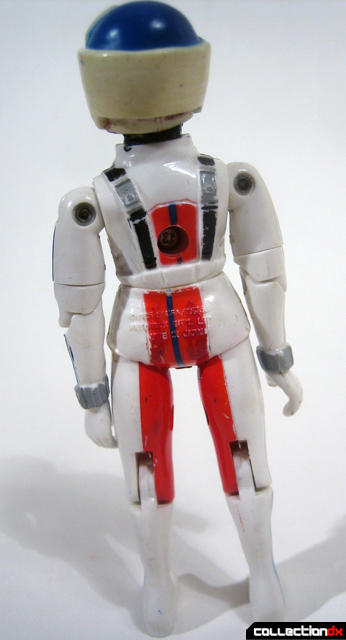 As you can see by the figure it was well played with and it exposes the many issues these Robotech figures had.

I have always liked the accessories with these Robotech figures and one of the few things well researched in the line. I like the sculpt of the iconic Macross helmet in 1:18 scale although the paint application was not the best. The gun accessory that comes with the figure is well picked, as it was only shown for a few seconds in Macross. But sadly the gun peg did not fit in the hand of the figure and broken thumbs seem to be common with this and many of the other Robotech figures. 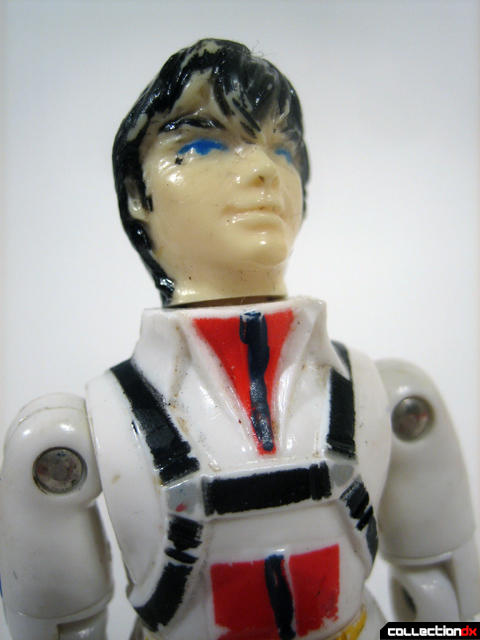 But it quickly goes downhill after this. The figure’s body proportions are off and Rick Hunter looks like he has birthing hips with long ape arms. The face sculpt has no anime appeal to it which is also one of the worst features of the line. I was thinking why I painted so many of my Robotech figures. It was when I did my first Robotech figure review when a CDX reader reminded me about how the paint used to easily flake off the figure. So the painted patchwork was necessary as the figures paint flaked off quickly with normal play. 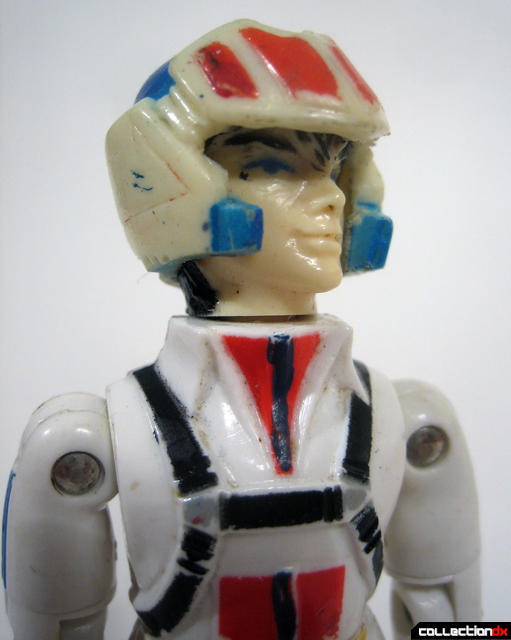 Although this figure is as a bad as it is, there is some appeal to it in that out of proportion 70’s soft vinyl, cheap vending toy kind of way. This is an action figure of iconic Hikaru Ichijo from Macross in his famous white and red flight suit. The helmet and gun are a nice touch and it is just cool that there is a figure of such an important anime character regardless of how bad the figure was.

If you were going to purchase just one of these ill-conceived Matchbox Robotech figures and you are a Macross fan, this is the one to buy just as filler for your Macross toy collection. The bad and good of this figure is all in the matter of how you want to look at it.

I also first came across these when I was a kid. I remember thinking how horrible the proportions were even as a kid. I felt so let down by this line and mostly the horrid Voltron figures. These companies managed to mutilate the figures of two shows that captured my imagination. I freaked when both figure lines came out only to find myself only mildly amused at their sculpts. But beggars can't be choosers I guess. But seriously come on

This was the first venture Matchbox made into action figure making, and they failed so bad. Who could blame them for wanting to jump on that Star Wars / GI Joe money train?

Their attempt was really honest- as mentioned above they are pretty accurate across the board for the most part, from Lisa's space helmet, to the pistols, etc. - the paintwork is pretty good for the time as well. Too bad they hired a horrible factory to execute this line, resulting in lots of paint flaking and broken thumbs, half-screwed in legs, and other problems. It didn't help that the sculpts were weak compared to Kenner/Hasbro's work, and wow did these quickly end up in the dollar bin. I remember pegs of the Dana Sterling figure was still available at my local Toys R Us for $0.50 in 1992- the following year I picked up doubles of almost the whole line in a mall on vacation for under $20.

Nowadays it is a little tough to get loose, mint figures, as the paint comes off pretty easily. The hardest to find ones the last few years have been Lunk, Black Minmei, and Rick Fokker.

When you get a bunch of this line, they have awesome funk appeal.

For those not familiar with the line, Harmony Gold re-released most of the original figures in the 1990's. They are made of far cheaper plastic and should be avoided for the most part. While the HG includes Rick's helmet, many of the other figures do not include all the accessories that the original Matchboxes included, like the Valkyrie Pilot helmets, or different guns. The figures also have slightly different butt stamps if i remember right. In particular, I remember that only the Matchbox versions of Fokker, Max, and Milia Pilot come with their cool helmets.

Also really cool, is the SDF Playset... I had a boxed one in the 90's but sold it long ago (along with my near-complete set of Robotech figures loose & MOC) and I've been on the hunt for a replacement playset.

Is it in scale with the GI JOE figurs? If so, it would match with my Robotech from playmates...

Also, I feel like the writer of this article is a little unfair to these old Robotech toys. This is a really sorry example of the Rick Hunter figure and when you have a nice clean one (and I don't mean the crappy Harmony Gold release) they are decent and look really good inside the big weird Matchbox Valkyrie.

Actually this is the only time I've posted a kid worn item on CDX. I usually try to locate good clean examples with all the accessories for obvious reasons. You you click the "Robotech Defense Force" you will see I posted clean or VG+ figures for CDX readers.

I posted this figure in this condition for two reasons:

1) I wanted to give an example of a kid worn version of Robotech figures with all the paint that easily chipped off, broken thumbs due to a gun that was to big to put in the hand, cheap plastic et al. If you around when these came out they tore up very quickly especially compared to sturdy GI Joe & Star Wars figures where you had to actively work to destroy them. I have GI Joe figures that I bought when I was younger and four years earlier that still look great and much better than many of my Robotech figures.

2) I bought this figure picture basically the day they came out and sometimes it just better and sentimental to write about the figure that I've had for 20+years than some anonymous figure that I just bought yesterday. My Dana Sterling figure I reviewed was a replacement but this time I wanted to write about one of my originals. I do plan to pick up cleaner figure later on and take photos and add it to this review.

I like the Matchbox Robotech line and this figure for the reasons stated in the review and it is on my list of active series I collect. The line isn't without fault and especially compared to the other high quality toys that were coming out of the USA and Japan. Remember I was a kid when these came out and even then I was very let down with how they managed the line.

But I'm curious how many peoples kid-worn Joes looks similar to poor Rick Hunter here. Very few of my old G.I. Joes survived my childhood. The paint has stayed on, but there are lots of severed thumbs, and in quite a few cases all I have remaining are a pair of legs, once the rubber band broke and I lost the torso. Maybe I was just a rotten kid...

LOl! I can't judge if you were rotten or not, that's between you and your action figures! ; )

About 90% of the items I reviewed here are toys I had as a kid and I took great care of them, but I was a weird kid. Joes usual big problems were broken thumbs and waist pieces but by the next year they redesigned the figures and those problems nearly disappeared.

Oddly enough, I dug out all my old toys from my parents attic last summer and all the old (original Kenner) Star Wars figs and the Matchbox Robotech figs had survived just fine through at least 25 yrs of Texas summers! The Joes on the other hand had a lot of broken rubber bands and other failings. They didn't survive to well at all. I have the Star Wars and Robotech guys out on display now...and they look great. I took good care of my toys too, so you're not alone! My Robotech Matchbox figs look almost brand new...

Glad you were able to retrieve your loot!

The O-rings can be easily replaced. You can replace them with water faucet o-rings available at hardware stores with 10 in package for a few dollars. Take out the screw, replace the o-ring and put it back together and it should be good as new.

The first year GI Joe figures had some QC issues but many of those issues were resolved the following year with the swivel armed figures.

My personal experience was that the Robotech figures paint flaked off really quickly with normal play. Its great that yours are still minty.