The Autobot Minibots (or Mini Vehicles) started off as a set of re-purposed transformable robots that originated from an offshoot of Takara's Microman line. As the Transformers progressed, more toys were added to the mix with many of them being remolds of existing figures. Looking back, the Minibots are a charming bunch of inexpensive toys that are the spiritual predecessor to the smaller modern Transformers.

As a child I certainly had my fair share of Minibots in my toy bin but I never had a strong desire to collect them as an adult. However there was one character who always stuck out in my mind and after one trip to eBay, I received my very own... 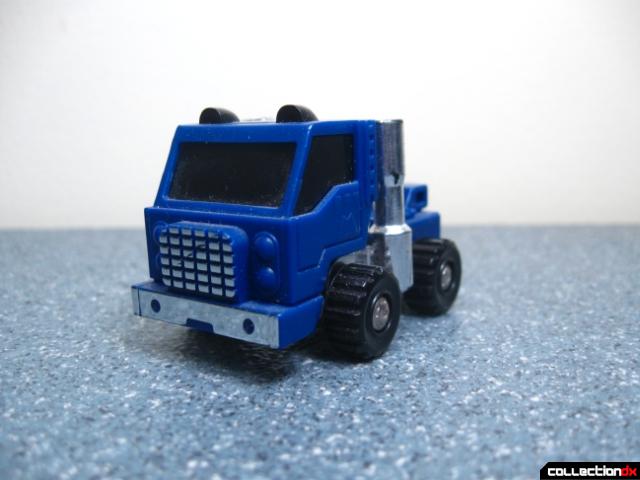 Pipes was originally released in 1986 as part of the third wave of Minibots. This little blue truck is a remold of Huffer and is meant to to resemble a cutesy Penny Racer (or Choro-Q) style toy. Pipes has a fair number of differences from Huffer with his front grille, headlights, and pipes being notably different. 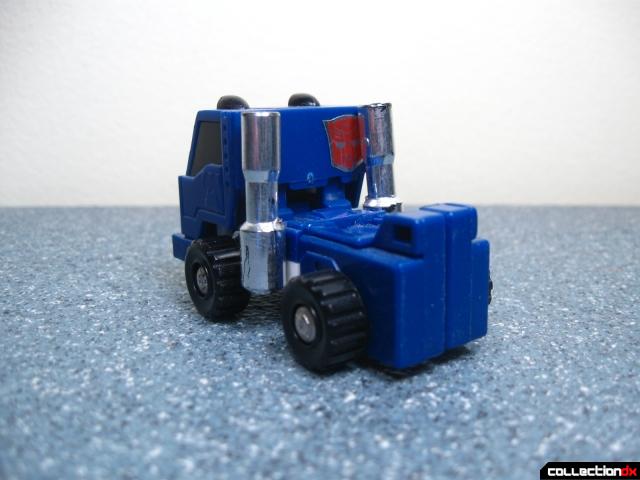 Pipes is simple but quite sturdy for an all plastic figure. 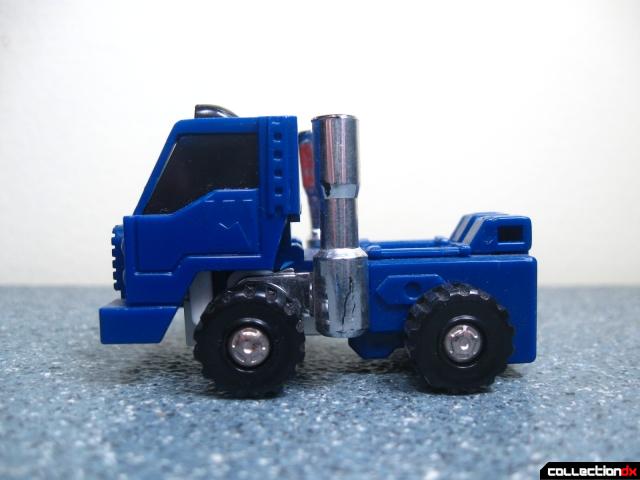 He's a little over two inches long in vehicle mode. 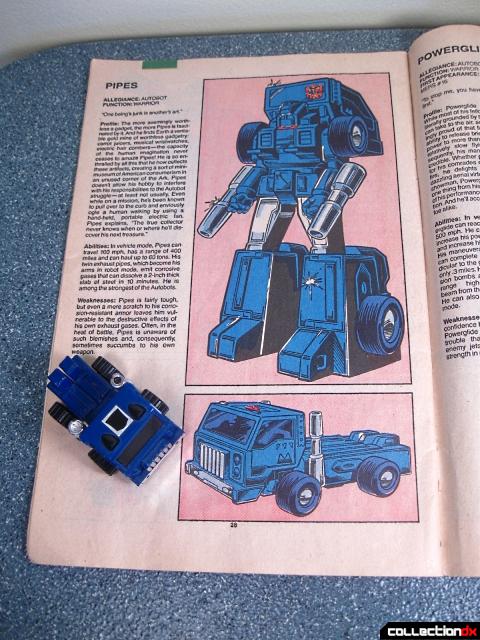 In terms of "the fiction," Pipes didn't show up that much or do anything significant other than telling Blurr to "shut up!" Still, his extended bio from Transformers Universe is rather charming as Pipes is a collector just like us. He's into procuring human appliances and gadgets like a robotic version of a flea market enthusiast. Oddly enough his vehicle mode is rendered in the cartoon more like a flatbed than a semi-truck cab like Huffer. Kinda fits his character as a junk collector, don't you think? 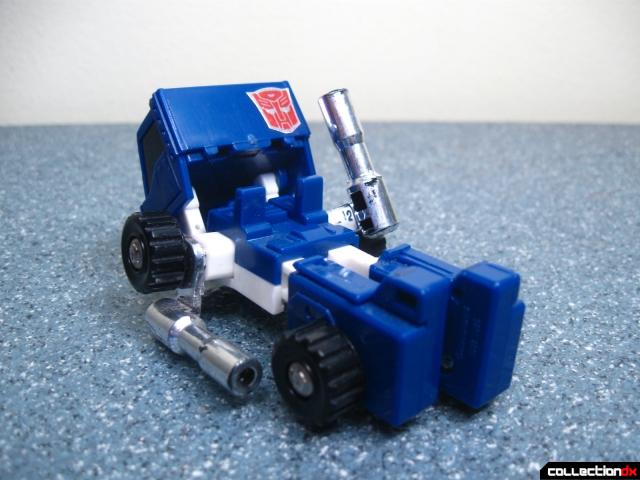 Pipes has a basic transformation that mostly consists of sliding his arms out from the sides and extending his lower legs. One major way he deviates from Huffer is how the upper side of the truck forms his front in robot mode rather than the back. To achieve this, Pipes's truck cab actually hinges down onto his shoulders like a mechanical hoodie. 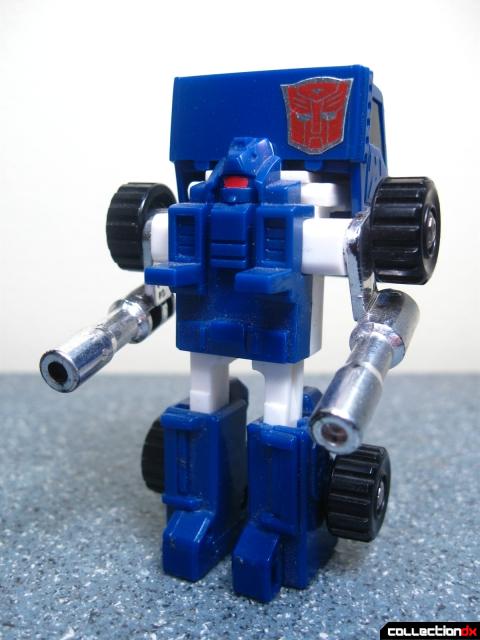 In robot mode, Pipes is a stocky fellow who has the air of a classic Takara figure. The two extended "forks" on his chest help keep his cab in place for truck mode but also have some seat-like detailing. One of the things I really like about Pipes is that unlike Huffer, his arms hang down in a more natural manner with his exhaust pipes having a permanently bent elbow joint. 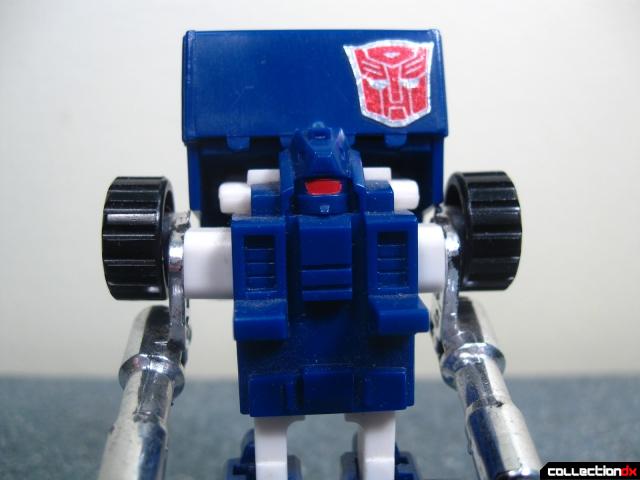 Pipes's head design is nicely done for a figure of his size and has a good amount of detail on his RGM-79 GM looking cranium. The single red paint app used for his visor is somewhat messily applied on my vintage Pipes. The modern Encore reissue does not appear to have this problem. I have to say I've always liked the gigantic Autobot symbol stuck on the side of his hoodie. It's a weird bit of asymmetry that works for Pipes. 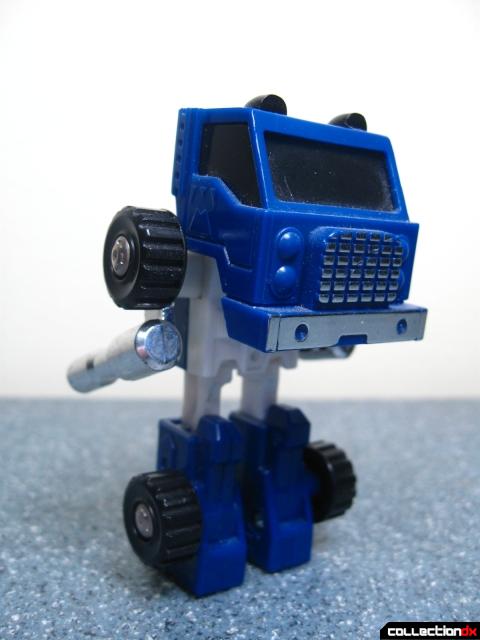 Even with his giant truck cab hood, Pipes is a pretty clean design overall. 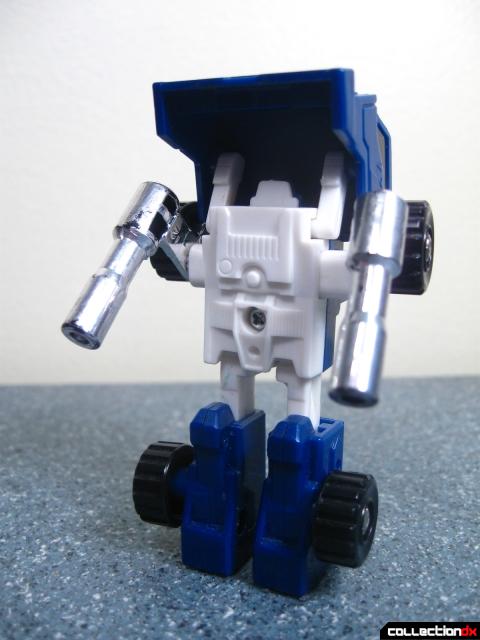 The way Pipes is remolded from Huffer leaves him some quite visible vestigial traits of the latter. In fact, most of Huffer's body is still visible on Pipes's back like a parasitic twin. The back of Pipes's head could even be seen as an abstract face. Here you can also see how on Huffer, his arms had that unnatural bend in their elbows. 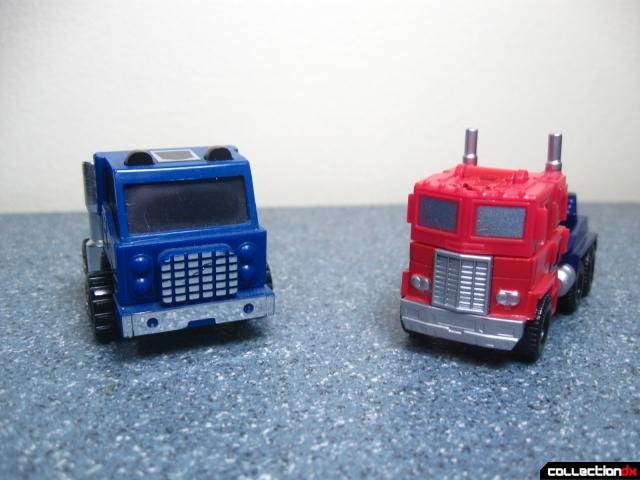 As I mentioned before, the Minibot is like the spiritual predecessor to the modern Legends Class figures. When put next to the small Optimus Prime toy, it's easy to see a resemblance in size, scope, and complexity. 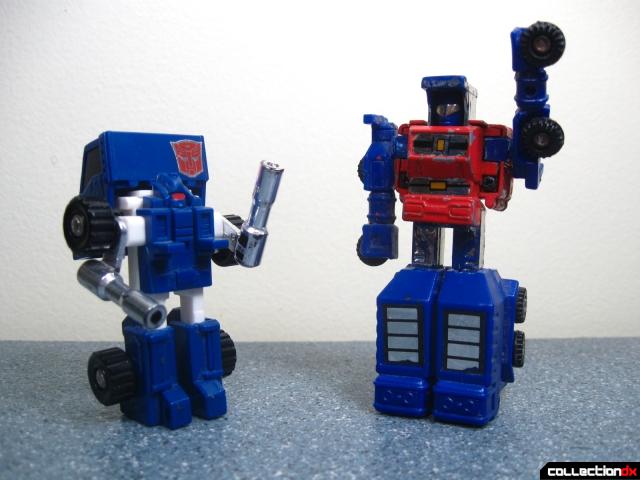 It's even apparent in robot mo- 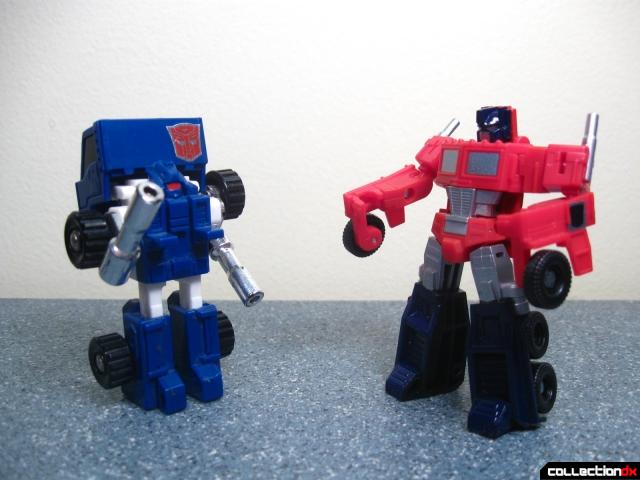 The link between Minibots and Legends Class figures is even apparent in robot mode. The only thing Optimus really lacks in comparison to Pipes is a healthy dose of chrome. 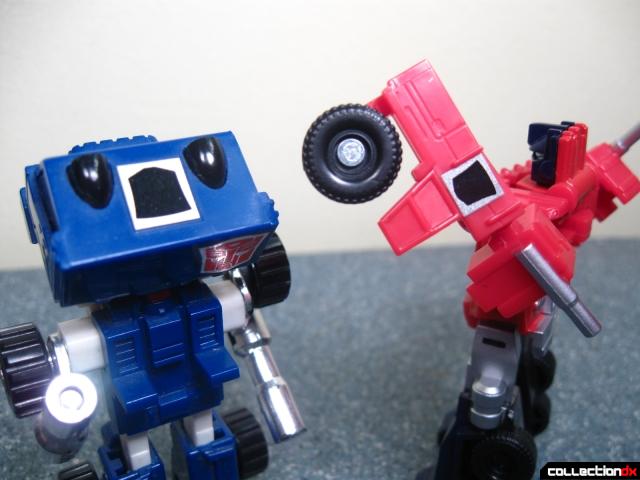 As a later Generation 1 toy, Pipes features a rubsign that authenticates him as a true Transformer. Hasbro would later bring back the classic rubsign as part of their "Reveal the Shield" branded figures. 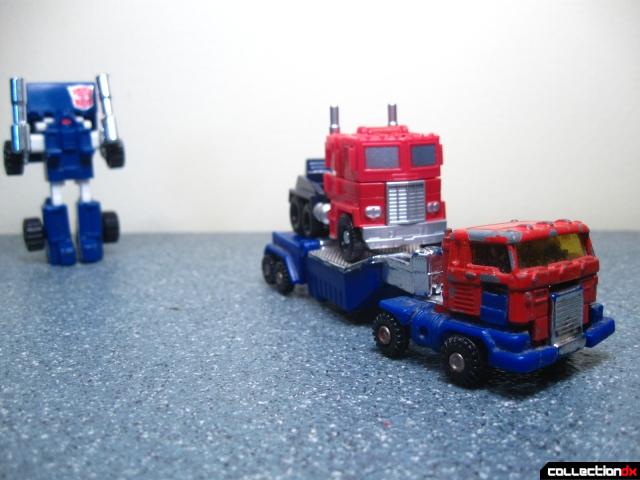 "Come back with my leader! He still needs to make a delivery!"

Of course neither Pipes nor Optimus have that perfect blend of diecast and chrome parts in a small transformable package the way some other toys do. 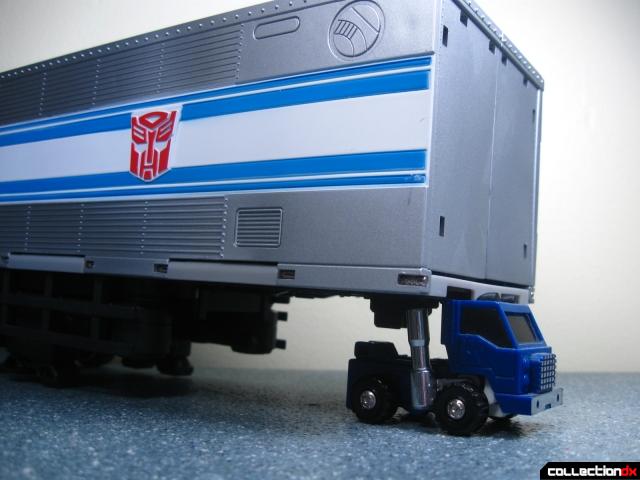 I believe in you, Pipes.

Generation 1 Pipes is a great vintage Transformer who combines style and charm along with affordability on the aftermarket. His character's lack of notoriety makes him appreciated but not necessarily desirable. For me, Pipes is a toy that hits all the marks for things I like about a toy. He even taps into the reptilian part of my inner child's brain that keeps blaring, "trucks are kewl!" While it would be nice to see an official update of the character in the future, the original toy still holds up.

Is a cool 3rd party TF manufacturer. I just ordered their "Rager" or Huffer. They have a Pipes called "Tubes" as well. It's a really cool take on the original minibots. If you love him go check out what they did. I feel the same way about Huffer.

Igear deff has it made when it comes to the mini bots. Their Brawn and Beachcomber are personal favs of mine.

I said OFFICIAL update and I certainly don't want one that's an expensive repaint of a stumpy Huffer :L

Think of all the gobots you could buy

Also Krank is a pretty good name for Huffer.