In 1986, while Takara/Hasbro was in the process of watering down the excellent first wave of G1 Transformers into duller, lamer iterations, Bandai was elaborating the simple 600 Series Machine Robo line into ever more ambitious toys. Tragically, American kids would never know.

Bandai explored the Gattai concept from all kinds of angles within Machine Robo. From classic five-part multi-transformational sets to the more simpler Double Robo sets, smaller couples of vehicles which combined into one bot.

All of the Double Robo toys were pretty great, but Sidelanser is a motorcycle, and thus of particular fascination.

Sidelanser is packaged in a typical mid-period MR box with styrofoam insert. These boxes aren't as beautiful as the black Battle Hacker packaging, but they're still handsome enough. 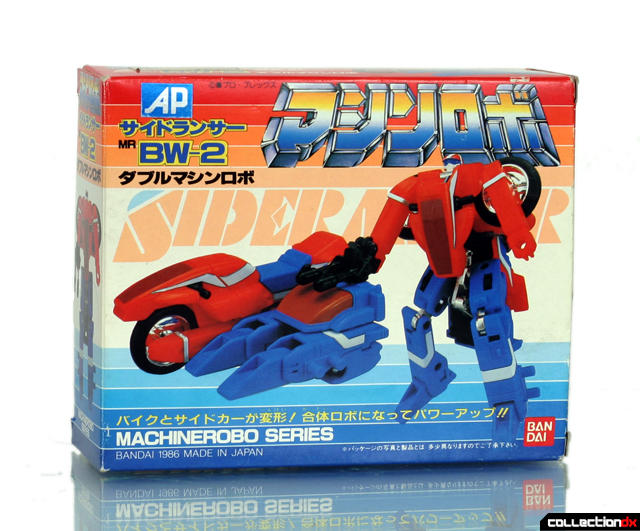 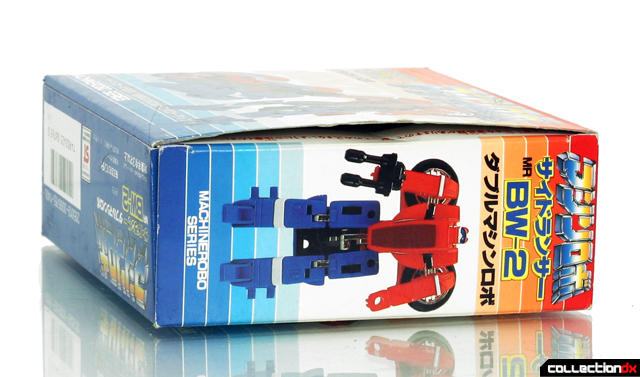 For some reason I assumed that the Double Robo sets were comparable to the DX-sized Dread Launcher toys in size and heft. Alas, as you can see, Sidelanser is of a humbler scale, slightly larger than the 600 series (though about the same as a Moto-bot - I'm assuming you all have a Moto-Bot for comparison).

The motorcycle is a classic PLEX design. Sleek, simple, futuristic. There's an ingenious kickstand/gun attachment to hold the bike up. The sidecar is a lovely addition. The two together are nicely balanced. Transformation is intuitive and engaging. The sidecar unfolds to form legs and hips. The central connector is diecast. The motorcycle twists and folds in half to form the upper body. I like how the connection is a sturdy ball joint. The resulting figure is nice looking, if unstable. The legs are a little too loose to hold together properly. He'll stand up, but only with some careful manipulation. Articulation is woeful. This is about as dynamic as it gets.