One of the few highpoints in Matchbox’s Robotech Defense Force line of action figures and accessories is that some of the products were the only toys ever released from Super Dimension Cavalry Southern Cross, which made up the Robotech Masters portion of Robotech. 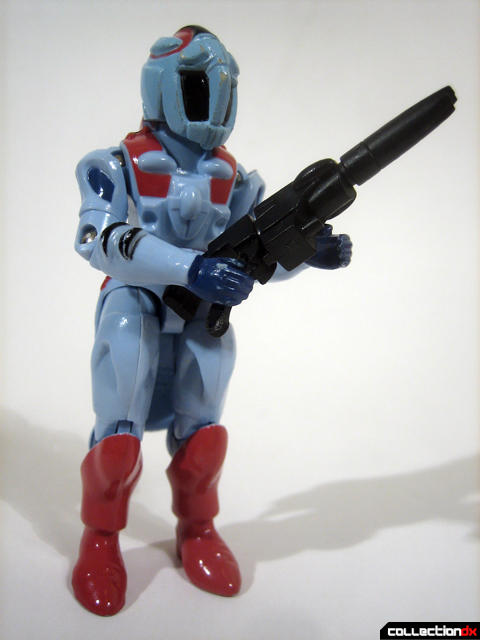 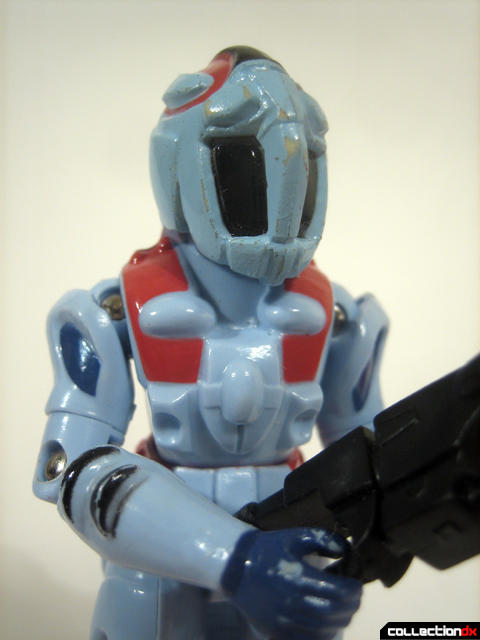 Bioroid Terminator was just another great example of the creative armored combat suits that Southern Cross is known for although this armor represents the standard invading Zor forces soldier and police force. 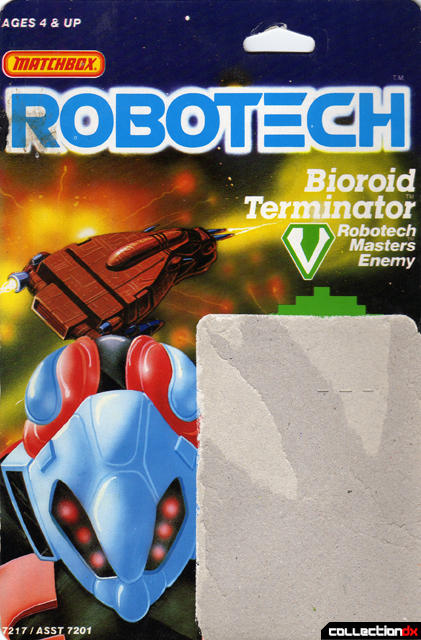 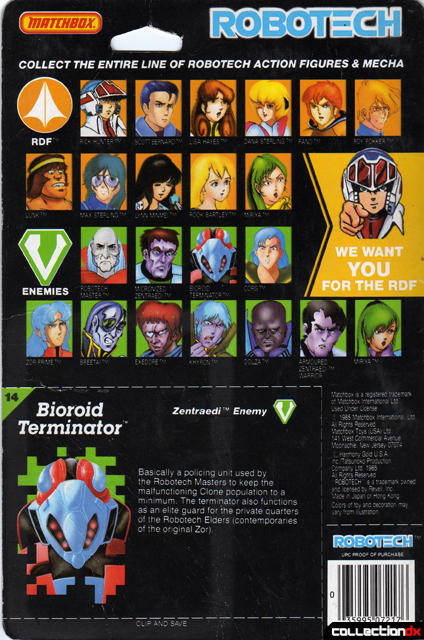 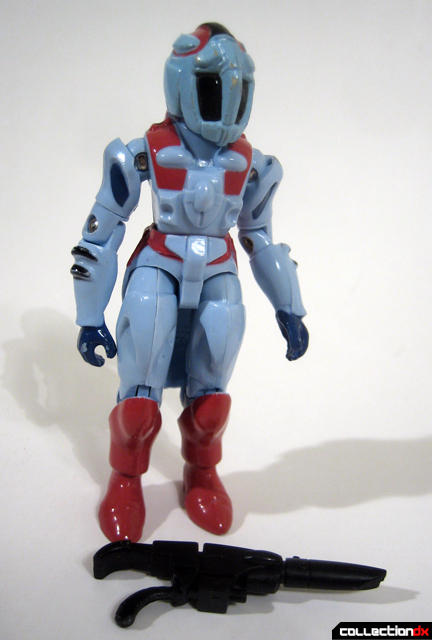 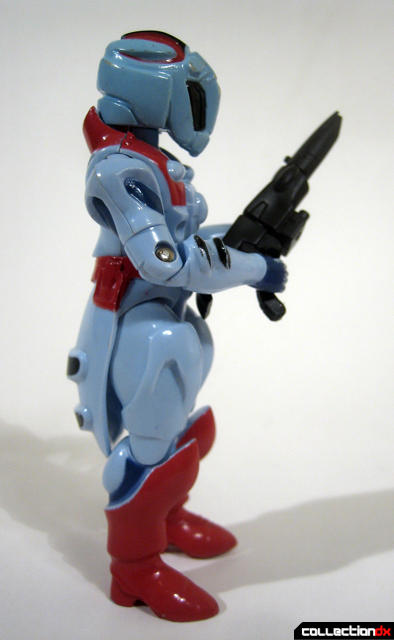 One aspect I do not like about the Matchbox Robotech line, in general, was the bad sculpting of the figures themselves, specifically the lack of anime looking head sculpts and out of proportion bodies that were made up in neck of the figure of all places. Strangely, Bioroid Terminator avoids those two features mostly due to it being a helmeted figure and the body being armored. 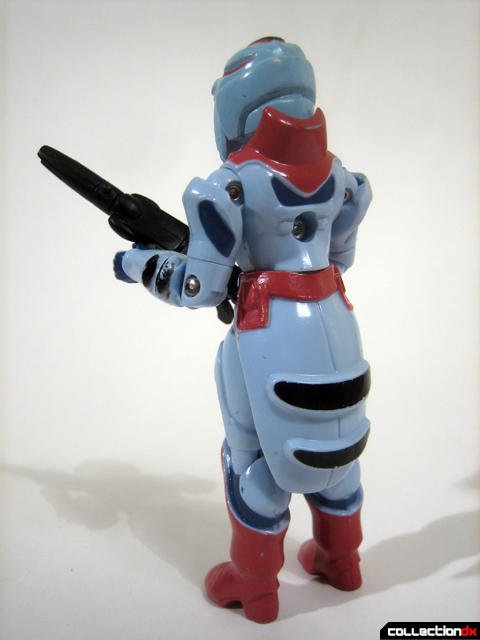 The figure features standard GI Joe 3 ¾ articulation with the exception of the bug influenced armored “skirt” that doe not permit the figure to sit down. The sculpt of the armor pieces are excellent and the color choice and paint masks of the figure were nicely chosen and really captures the oddness of the dark Zor art design that was used throughout Southern Cross. 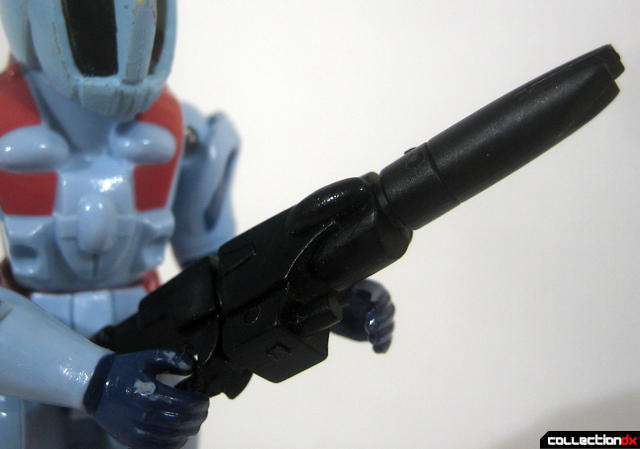 One feature I can give many accolades to Matchbox for is the accurate weapons that were included with many of the figures including the weapon that was released with Bioroid Terminator. The figure looks excellent holding the rifle and is sized perfectly for the figure and is quite anime accurate. Unfortunately, Matchbox only released one vehicle for the Bioroid Terminator but what a great vehicle it was, the Bioroid Hover Craft. 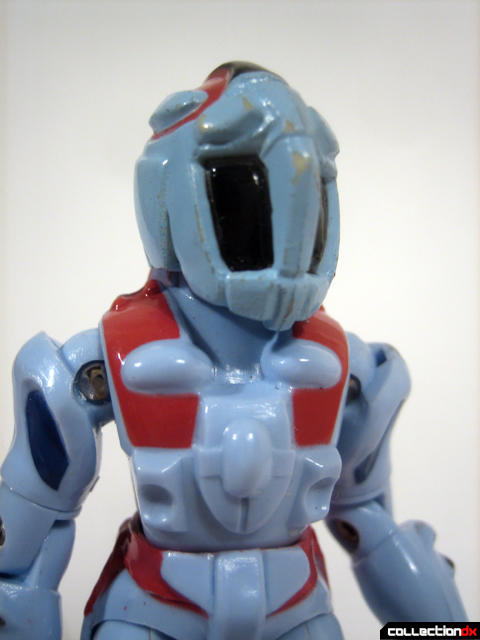 In the wild pendulum of quality that made up Matchbox’s Robotech line of action figures, Bioroid Terminator really stands out as a well-produced figure and a great inexpensive and much needed pick up for the Southern Cross / Robotech collection.

5 comments posted
Back in the day, I owned two

Back in the day, I owned two of these guys. I don't know why but I had a real soft spot for this figure, even though both of the ones I owned had the same fault. The upper torso would not sit straight with the lower half of the body. I had tried to correct this by twisting the metal hook inside the torso (that holds the o-ring) but the damn thing broke. The incident scarred me for life!

Good call on the Bioroid Termintor, Mod. Your right about the varying degrees of quality/ coolness with this line. I personally always favored the Dana Sterling figure, and the Invid shock Trooper's greatness cannot be denied.

This is one of the few Matchbox Robotech figures I had as a kid, and I loved it. I always had him sit in my battlepod though.... Great Toy!

Yup...this figure was one of the best released by Matchbox for the Robotech line. I just wish they could've figured something out to do with the butt skirt to make it so he could sit down...

Yep, I recently was going through all my old toys in my parents attic and stumbled upon my box of Robotech Matchbox toys. This figure was one of my faves too. Found his hovercraft to fly him around on too! 2 Invid Shocktroops, the Invid scout, the Battlepod and 2 old Cyclones plus about 8 or so figues. Man, some of these were made soooo cheaply, makes me wonder how they are still actually all in one piece after 20 some odd years in a hot Texas attic!