Pony Toy Go Round, Los Angeles California - circa 1986: I was given a choice by my parents to make the decision to purchase one of two Spiral Zone toys that was needed for the collection: Monoseed or Sentinel Bear. Both were priced at $45.00 which was a lot of money those days. I correctly chose Monoseed but for the next 20 years I always dreamed of owning the third Spiral Zone figure Sentinel Bear. 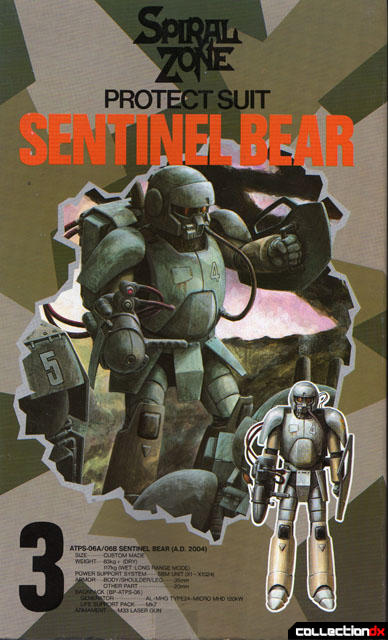 A Hong Kong toy dealer has been listing original 1985 Bandai Spiral Zone figures on Ebay recently and up went a N.O.S. unassembled mint copy of Sentinel Bear. Seven days later and $100.99 less in my paypal account it was headed to my door step from Hong Kong. Here was a great chance to do a review of a 20-year-old unassembled Spiral Zone action figure.

Like all of the Spiral Zone releases, Sentinel Bear’s full color packaging is a sight to behold. The back of the box reproduces a beautiful oil painting of a unit of Sentinel Bears on patrol through a barren wasteland with smoke fuming out of their backpacks. It’s great to read some of the stats on Sentinel Bear the back of the box. It appears that the SB Armor was first issued in 2004 AD and the armor weighs 117kg wet! It is also good to note that the box is wider than the other two figures boxes; most likely because of the extra parts needed to assemble the figure. 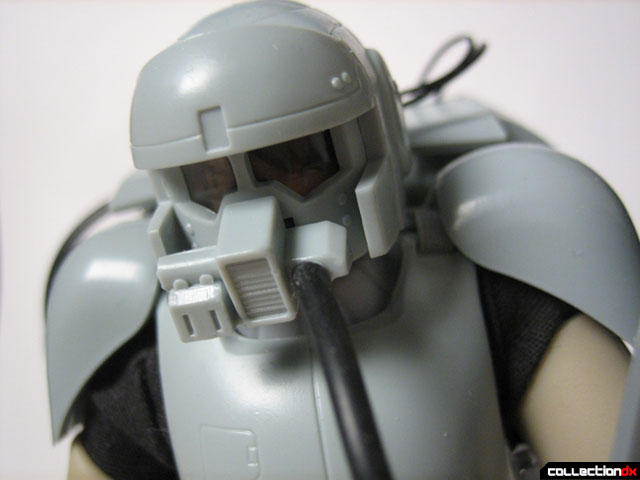 As described in the auction Sentinel Bear was N.O.S. condition as none of the parts bags have been opened and all the parts were in original condition. One issue that all Spiral Zone collectors should take note is that the rubber the boots are made out of have some kind of chemical reaction with the Styrofoam packaging tray. All of my Spiral Zone figures boots have eaten through the Styrofoam and my Sentinel Bear is no exception. I suggest taking the boots out of the tray placement and put them in one of the plastic Baggies provided when not on display or long-term storage.

The molds were crisp on the figure and sprue although some of the waist armor had to be cleaned up on the very fragile tabs in order for it to fit in the holes on the belt. This has been the only time I’ve experienced minor flash on a Spiral Zone figure. 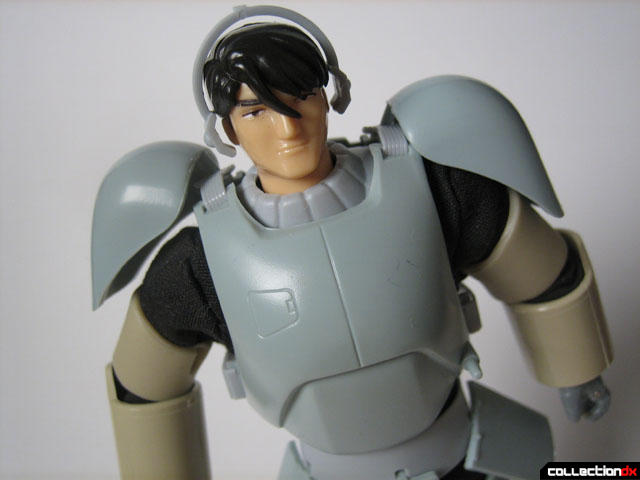 One of my favorite features is that, besides the brown wrist and shin armor, Sentinel Bear armor is molded in three shades of light blue-grey that gives it somewhat of a subtle patched up look and is aesthetically appealing to the eye. No small detail went unnoticed with Spiral Zone figures.

Assembly is straightforward. Give yourself about an hour of build time and I suggest some good sprue cutters available from most hobby shops to get a clean cut for the parts. I had some trouble with putting the barrel cap of the hand Laser gun on the rest of the gun. I had to file down the peg for it to fit properly. Another feature unique to Sentinel Bear was that the SB Laser Gun Is not held by the figures’ hand but has a peg inside the gun that when the hand and wrist armor is removed the peg inserts in its place. That gives it a nice solid connection for display. But even better Bandai included the extra hand and wrist armor parts so if you would like to display Sentinel Bear without the laser gun, it will still look complete. 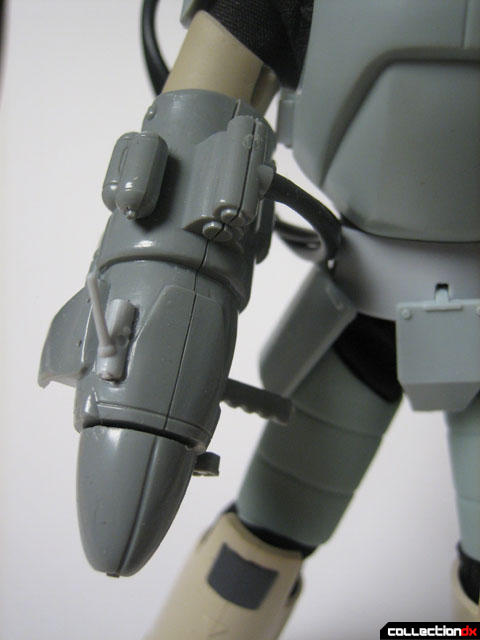 The backpack is huge with many crisp molded details. 4 holes are provided for the hoses from the laser gun and helmet. Another hose protrudes from the bottom of the backpack.

Sentinel Bear also includes a shield that is unique to this figure that snaps into one of the wrist armor. There is a bar for the hand to fit around for that High Complete look. 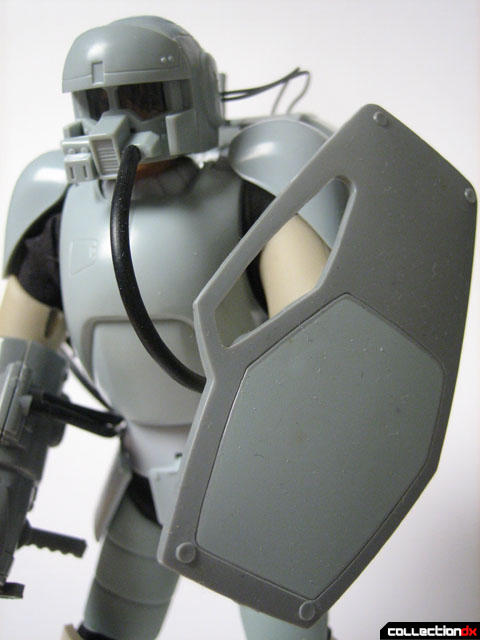 The helmet is full of many wonderful details that are expected from Spiral Zone figures. Three hoses come from the helmet, one goes to the chest armor and two go to the backpack. A clear sheet of plastic is provided for the visor. Again no detail to small for the designers at Bandai. Please note that the helmet doesn’t drop down on the head of the figure but most be angled in to fit around the head. SB comes with headphones to make the helmet fit more snug. This is definitely needed for the Bull Solid figure but not needed with Sentinel Bear, as it’s a tight fit as is.

Sentinel Bear’s figure is one of the best sculptures of the line. He appears older than the other figures and looks like he’s ready to get down to business. In short he’s one bad hombre and perfect for the role of the baddest of all Spiral Zone armor. Because of the heavy armor, the figure is less articulated when the armor is on the figure. 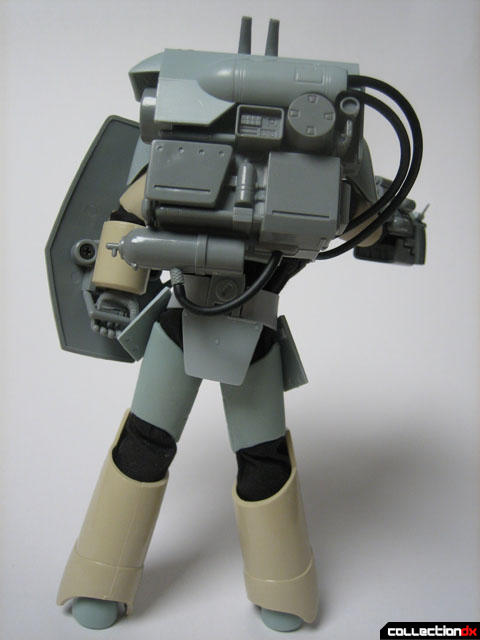 When Sentinel Bear is fully assembled it is one of the most appealing toys I have owned over the years. Any more details the figure would look over designed any less it would look like the two other SZ figures. Sentinel Bear is in a class of its own.

Was Sentinel Bear worth waiting 20 years for? As a young lad it was the mysterious figure I never owned. As an adult, when I finally purchased it, Sentinel Bear fulfilled every expectation I had of it and more and worth every penny I spent on it. In fact I can honestly say it’s one of the best toys Bandai has ever made.