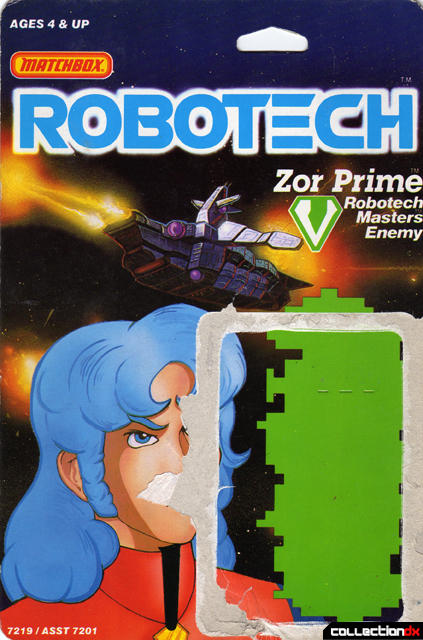 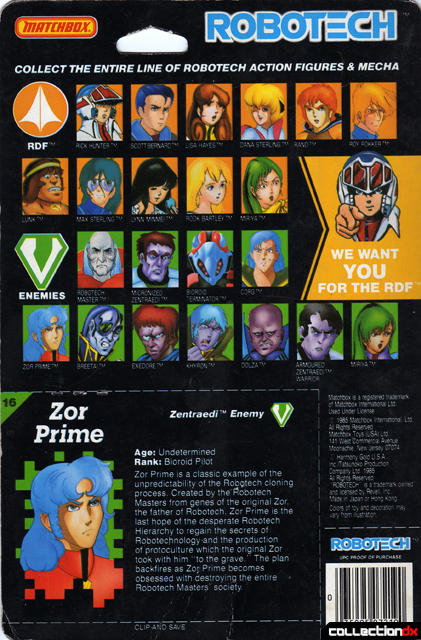 One of the easiest figures to obtain for the RDF series is Zor Prime or known in the original Southern Cross series as Seifriet Weibe. An important character in both series, it was a good subject choice for Matchbox to produce but the results less than desirable. 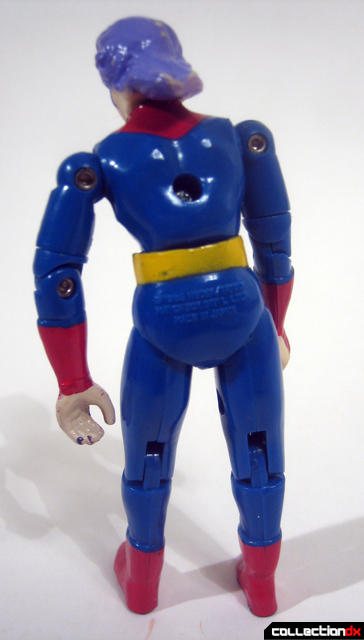 Typical of most all Matchbox RDF figures Zor’s bad posture hunchback appearance seems to be the most rememberable feature of this figure. The figure simply cannot stand up straight or even stand at all, something I believe stems from the small torso and a defective metal leg hook that holds the figure together.

Replicating Zor’s long hair in 1:18 figures was a decent attempt for the time, even Hasbro only attempted it for the first time in 1984 with their Baroness figure. Unfortunately, the figure’s odd face sculpt does not have an anime style face, which is my biggest complaint of the entire line but you cannot fault them for getting his purple hair color correct! 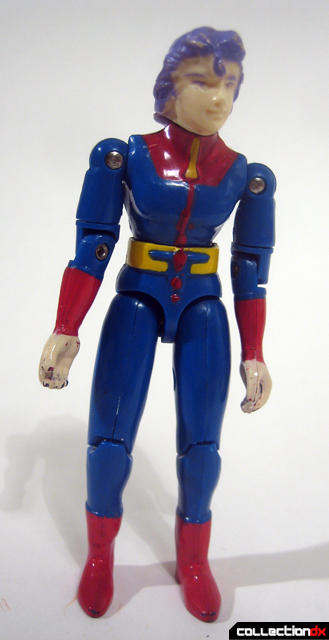 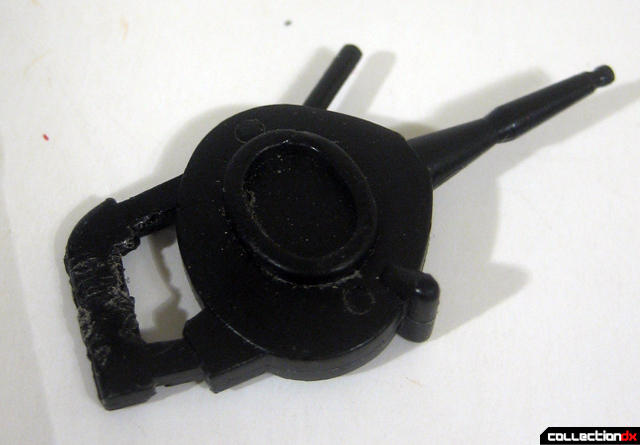 Some of the positives was the choice of using his Zor combat uniform for the figure, the vibrant colors really pops and lends to the art design of the Southern Cross TV series. The weapon sculpt is excellent although I cannot remember if this style of gun was scaled down for human use but it still looks cool. Another missed opportunity was producing Zor with his Southern Cross armor, which would have been a great addition to the line.

Not necessary the greatest figure ever made but an inexpensive and easy purchase for the Robotech/Southern Cross collection.

©2010 Article and Pictures by Leonardo Flores and CollectionDX

That's just what I was thinking!

I don't think that the larger Bioroid guns were ever scaled down in the show.

A hunchback with tits?! I freaking hate these Matchbox Robotech figures!!!!

At least he doesn't have Chirico boobs.

You can probably still find that figure on clearance somewhere.

As much as I liked Robotech as a kid, I didnt bother picking these figures up at the toy store back then...even when they got marked down to almost nothing.(ok I had the chick one with the helmet...THAT DIDNT FIT OVER HER HEAD) I may have been young but I knew a bad sculpt when I saw it..hence my disappointment with the panosh place voltron figures which must have also been footsculpted by a blindfolded baboon with a swollen red butt

Cheap and Fast... that's how Panosh and Matchbox did these toys. They raced to meet the demand (both Voltron and Robotech were successful TV shows, but had no toys out for a while) so that they could get toys on the shelves to compete with Transformers and GIJOE.

Also keep in mind Matchbox and Panosh were new at the 3 3/4-inch action figure game. They obviously didn't have the years of experience that Hasbro and Kenner had with their popular toy lines. And the geniuses of Takara engineered those G1 TF for the most part. They had their work cut out for them to compete with those designs (and to me, even though I am addicted to 3 3/4-inch scale, those vehicles are all not that cool.

That's why they look like they were sculpted by a "blindfolded baboon with a swollen red butt".

Also remember that Harmony Gold re-released these figures in the early 90's in a horrible plastic that is even more brittle than the 80's versions. Zor was unchanged if i remember right.

I have this one, and yep, does look like he's had a hormone injection.