Like many people my age, I was a big Voltron fan when I was little. I had a great many of the toys on the market at the time. From the Matchbox sets to the LJN Castle Of Lions, my collection was all encompassing. (Although I should point out that I was one of the unfortunate kids whose parents made no distinction between the Matchbox Voltron III and the Panosh Place one, making for one of the most disappointing Christmas mornings ever and to this day I have never owned a fully combining diecast lion Voltron.)

As an adult collector, I've sort of lost my love for the character(s) and moved onto other things, but I still do regular Voltron searches with the hope that some people may mislabel a robot of another name. So a great many things have passed in front of my eyes and I think I've got a fairly good idea of the toys that were made and can recognize when I see something unusual. Such was the case a couple months back when this popped up for sale. 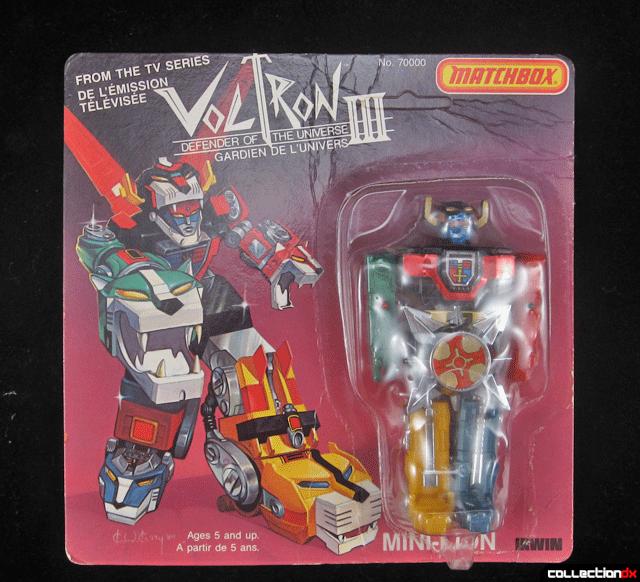 Now, I've seen the deluxe set of all 5 lions as well as the individually released ones. The 6" boxed mid sized version is well known to me as well. But a carded mini figure? Nope, this was a new one to me. It had a Buy It Now price that was within my range of something I would spend on an oddity that was just outside of my regular type of purchase so I decided to throw down on it just for the hell of it.

After sending payment, I started to do some research and found precious little information about it. The only reference to it at all in fact was found at a Voltron forum located HERE by someone who says his dad worked for the Canadian distribution company Irwin and speculated that perhaps the ones he found in his garage were unreleased sample items. Note the Irwin logo on the bottom as well as the dual language text.. 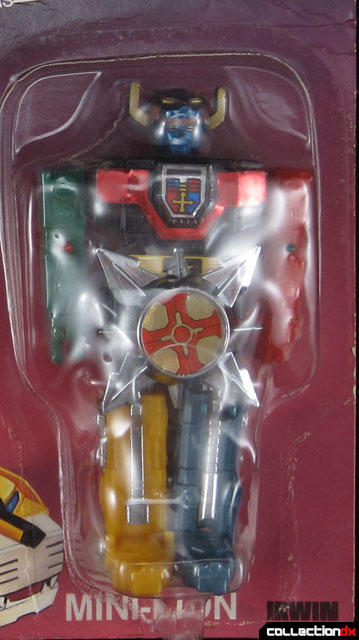 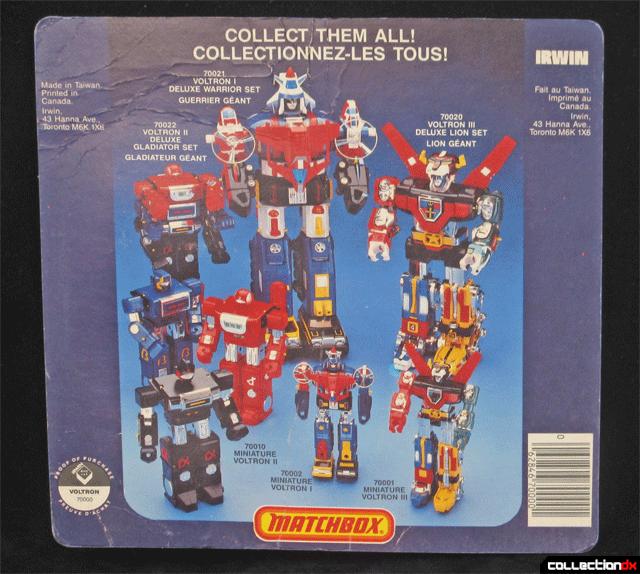 The fact that the example I have has an unpunched hang tag and no price sticker would seem to indicate that this one at least was not circulated. But that doesn't mean that none were. And would an item that was never actually for sale have a bar code on the packaging?

So what the heck is this thing? A rare Canadian release? An unreleased sample item?

While I'm not sure of the exact nature of this specific item, we can at least say where it originates. It is a repackaged version of the Victora Golion originally released in 1981. However the colors on the limbs were swapped. Could this, combined with the lead paint scare at the time, be the reason for it's scarcity? Perhaps the error was noticed, production halted and never resumed due to the paint issues? Pure speculation on my part, but whatever the reason, this doesn't seem to be something that many people are aware of. Have YOU seen this before?

8 comments posted
Im not sure

There might have been one at a toys r us i went to.

Wow, sometimes you really unearth something that seems like you;'re the only one in the world that owns right at the moment,

I recall having one of these. I liked it because it was similar to the small rubbery Vehicle Voltron. You might have some luck searching for the same thing from LJN. IIRC Irwin is/was the Canadian counterpart to them.

LJN also made a rubber Lion Force Voltron. Josh reviewed it HERE. This one has a diecast torso with plastic limbs. It was also heavily bootlegged, so if you had one loose, it might not be the same as this. I'm particularly interested in hearing from people who specifically and definitely remember this particular packaging.

We used to vacation there alot and White Elephant had every single toy and hard to find you could wish for, if hindsight was 20/20 i would have bought everything.....cept i was 7 lol.

I deffinatly remember the shot from the back of the card, could be from one of the other Matchbox products. I know i had the ful size Vehicle Voltron and at least 1 of the Voltron 2s.

From Canada and don't recall see'ing anything like it up here.

Can I just say that using "Voltron" as a search tool to catch mislabeled items is a little bit of genius? LOL

I get the same thing when I search for one of my favorites, Robby the Robot. To some folks, every robot is "Robby".

One of the only Voltron pieces I dont own. If you tire of this Voltron, Id be more than happy to take it off your hands! Lol but seriously, cool find

I feel like I've seen this loose before but always thought was a KO.
Was the common gladiator guard ever released on a card like this?
Cool find