Tomy in the 80’s possessed a marvelous unity of vision across all of its toys. The ZOIDS, Starriors, ‘Tomics and the like were all cut from the same cloth. All were modern, angular machines with little jewel-like cockpits filled with chrome pilots. While I certainly enjoyed the ZOIDS well enough as a child, I craved proper transforming Tomy robots, and the middling Starriors just weren’t enough. I didn’t know about the Tribots, Tomy’s forgotten foray into transforming robots. Indeed, few did, or do. The Tribots are exceedingly rare. 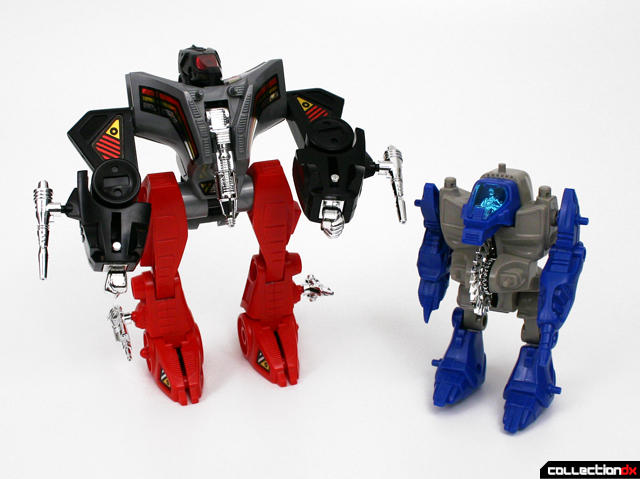 In my estimation, MIS-L is the weakest colorway of the weakest mold, though it’s still attractive enough.

MIS-L’s package is an undistinguished but respectable window-box. I like the product photos, but the poor logo design makes it look cheap. 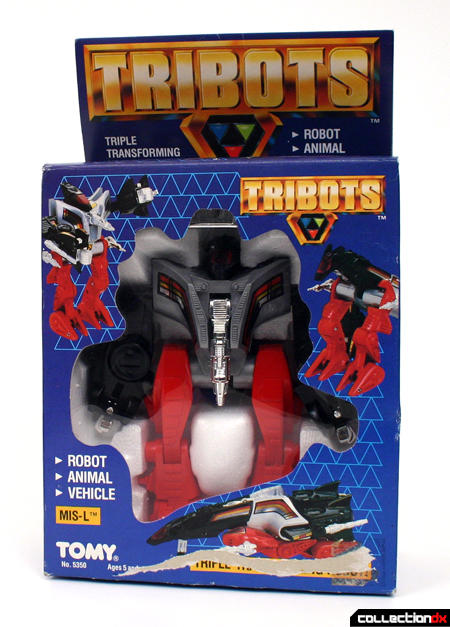 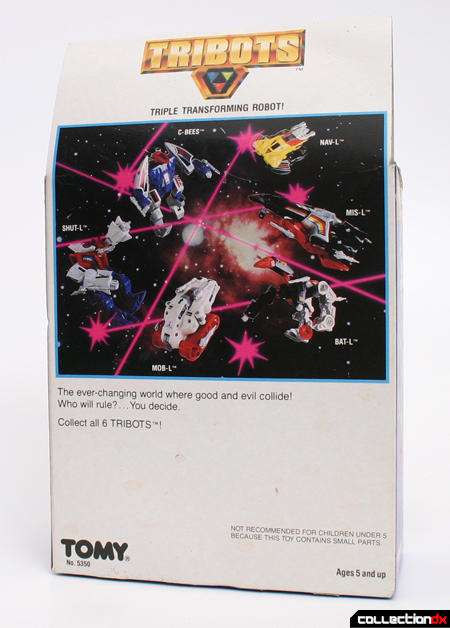 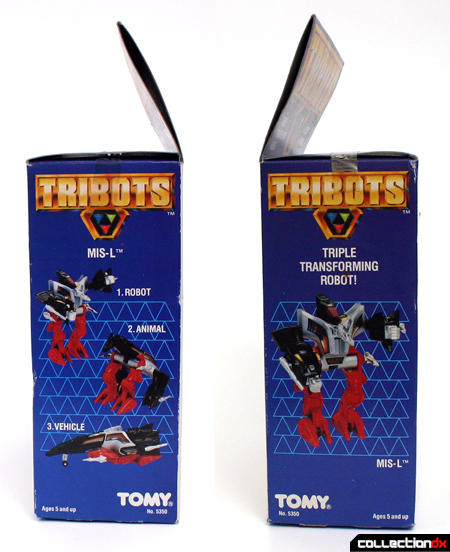 Inside, a styrofoam tray with a sprue of chrome weapons, a foil decal sheet, and instruction booklet. I couldn’t resist applying the decals, and I’m glad I did. They really elevate the plain base figure. 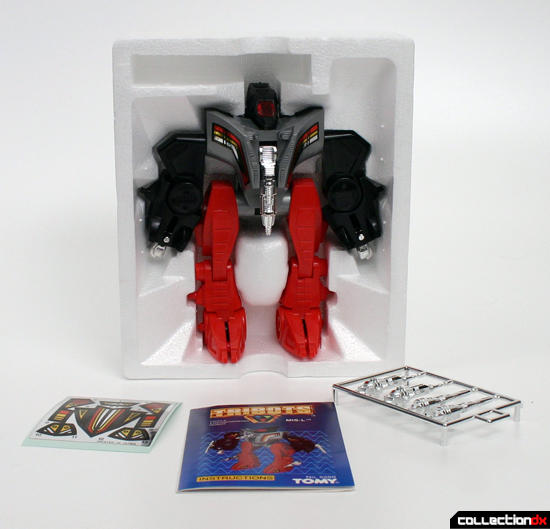 The robot is a solid, handsome block of quality ABS. Tomy really made some quality, sturdy toys, and this is no exception. The hand-feel of the piece is satisfying, heavy with solid clicky joints. 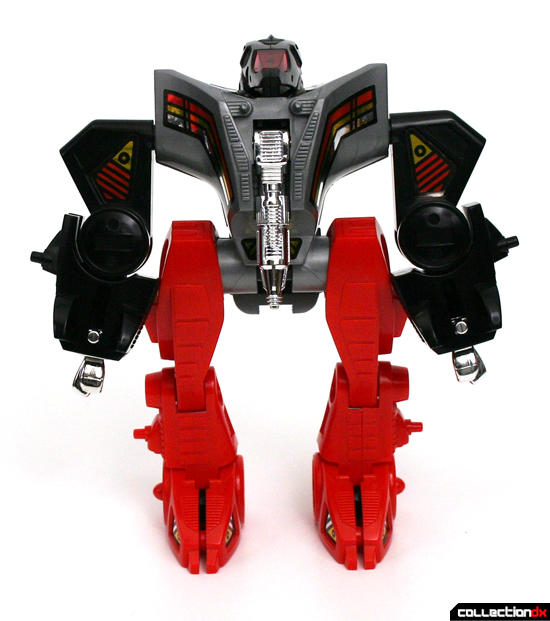 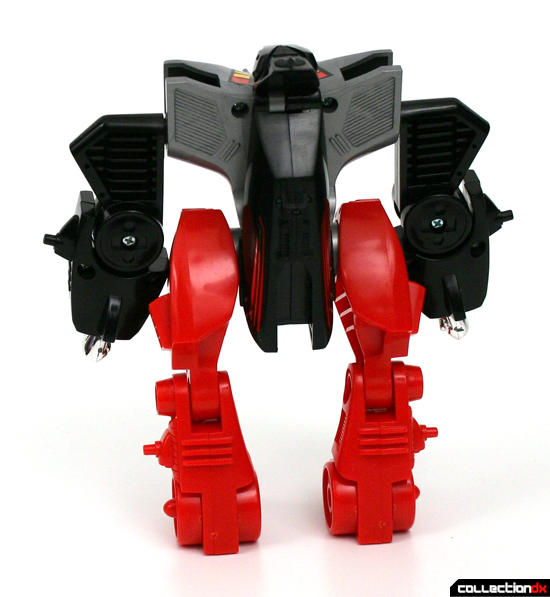 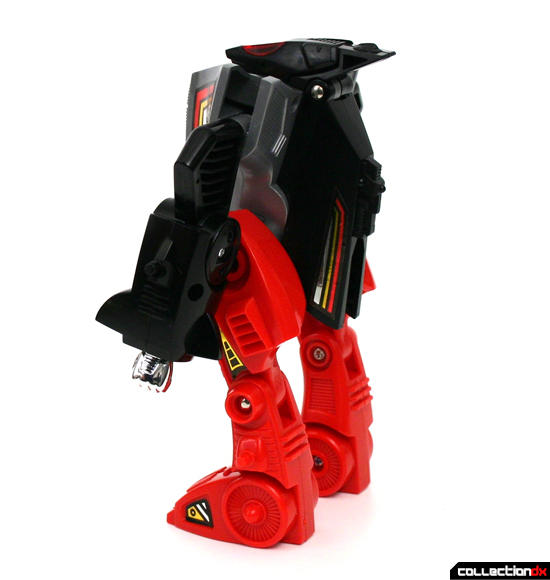 I’m also glad I took the accessory weapons off the sprue. The chrome accents really pop against the base colors. 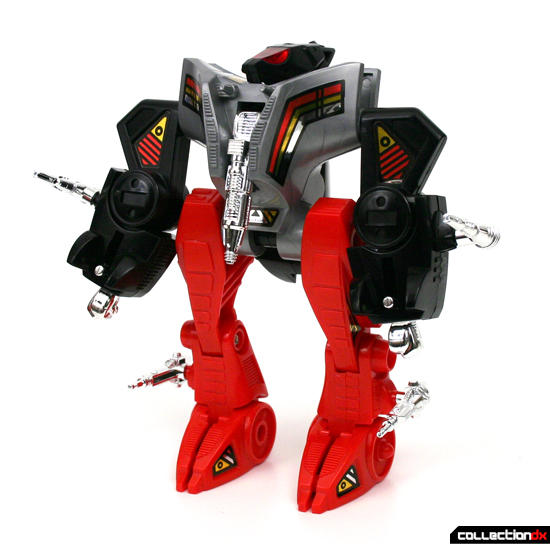 Posing isn’t spectacular, but I didn’t expect it to be. Movement is better than par for the time. 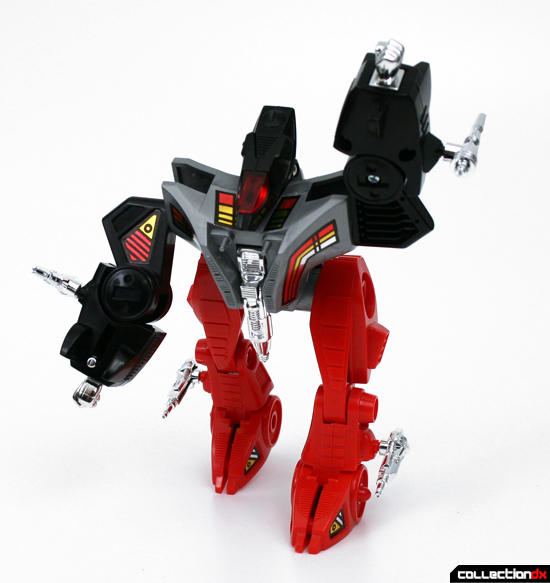 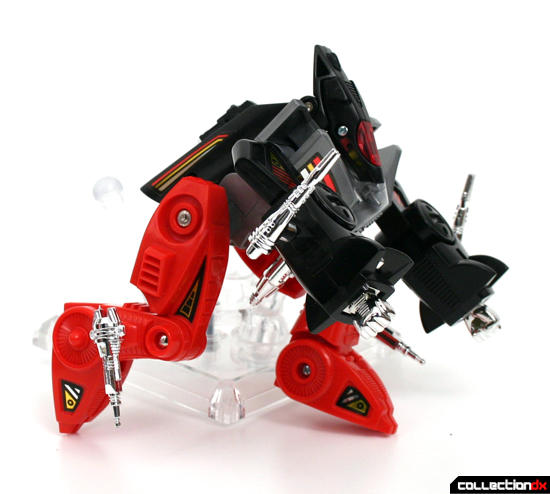 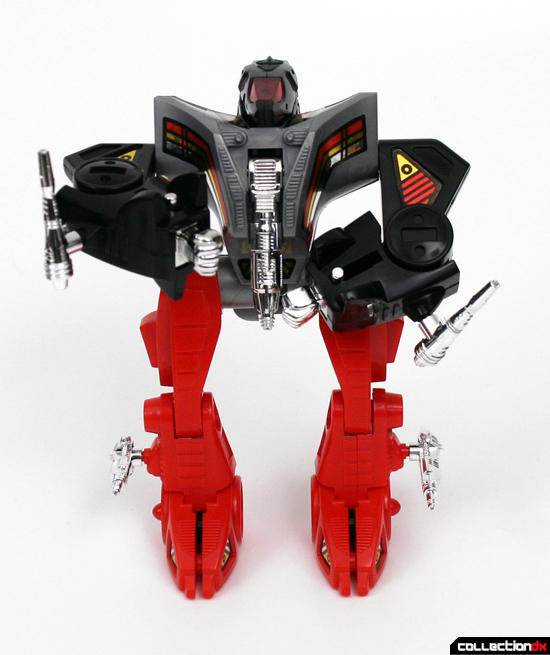 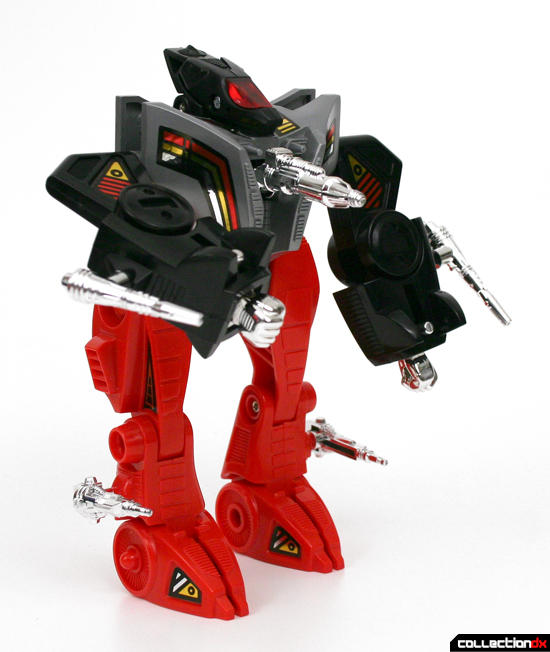 Let’s transform from Robot to Animal, shall we? 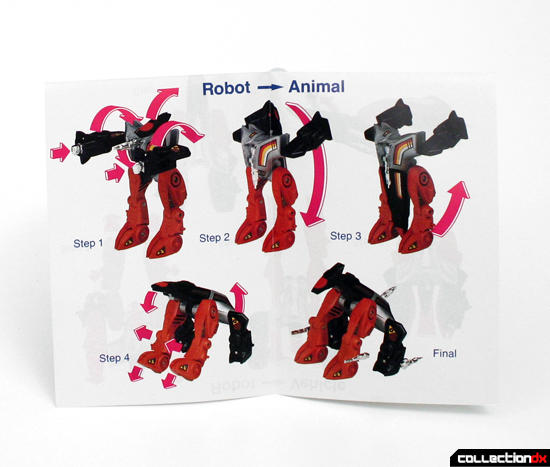 This animal. It’s not identified anywhere, but I think of it as a dog I guess? Or an anteater? Whatever. Not the most compelling alt-mode but goofy in a uniquely Tomy way. 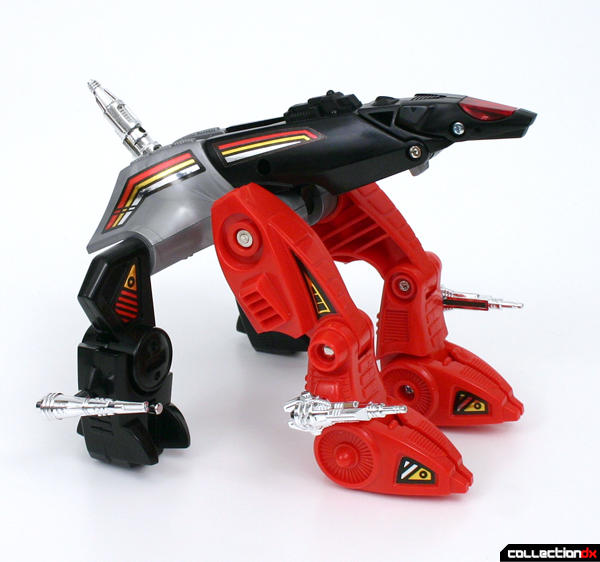 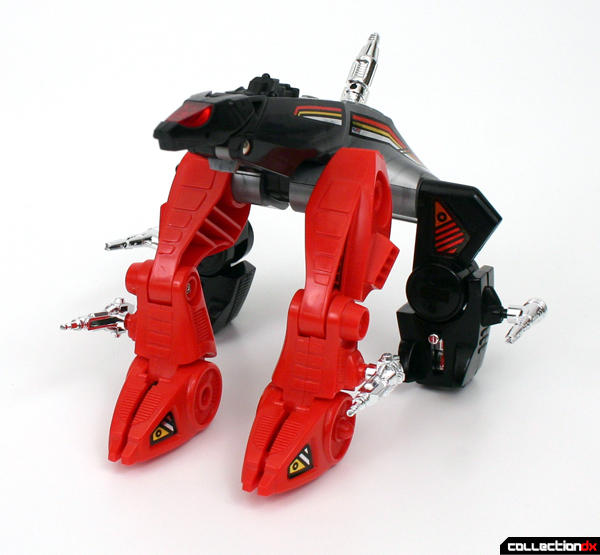 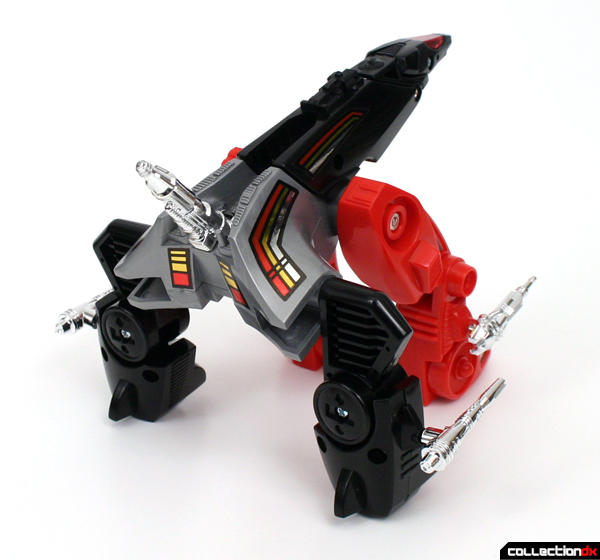 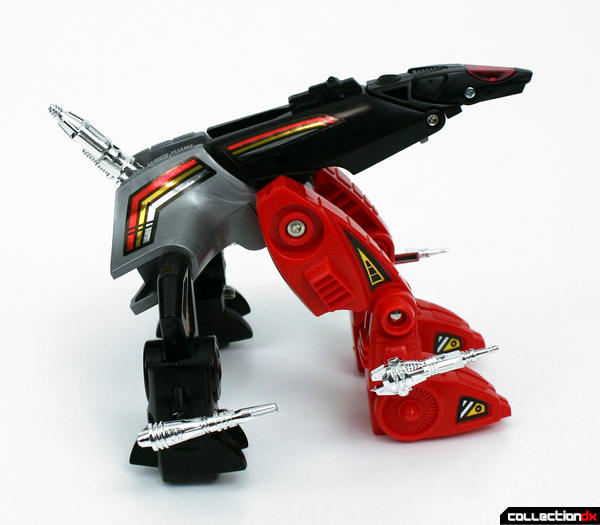 And now to vehicle mode. The vehicle is a sleek spaceship. 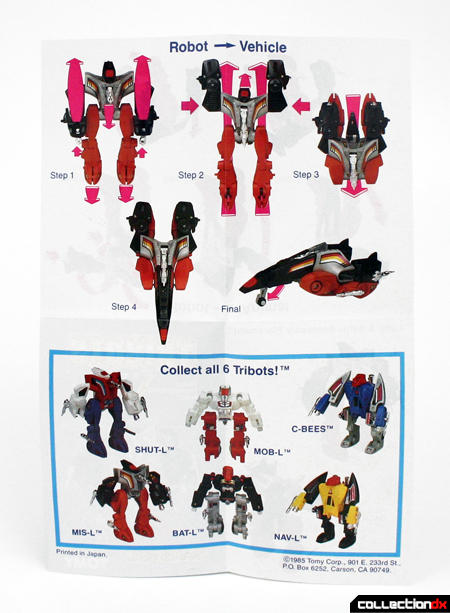 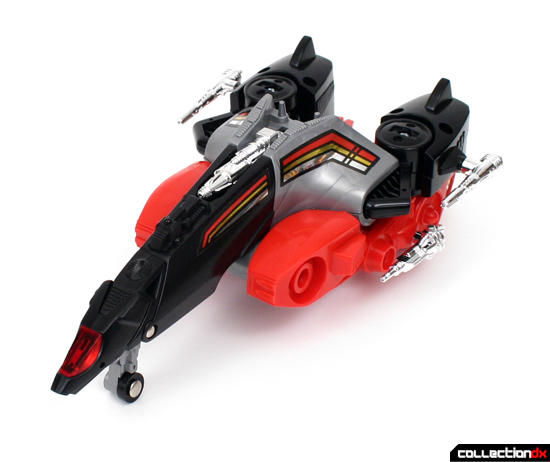 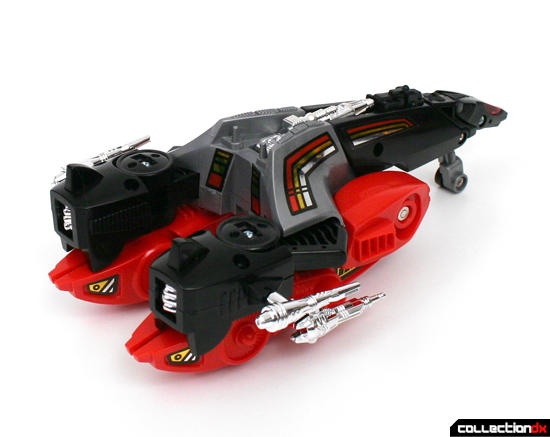 Ultimately I really enjoy the idea of MISL more than the fact of it. A proper triple-changing Tomy transformer should be terrific. The figure is competent, well-built and designed, but not inspired.

This looks... familiar, somehow... Hauntingly so, a reminder of a toy long since gone yet memorable to survive the decades since it was lost. Not those colors, not that toy, but rather the series it is from.

I can't put my finger on it.

Did you see the different color scheme on the instructions for the repaint, SHUT-L?

it stood about 4.5". It had multiple parts that could come apart- torso, head w/ blue cockpit and silver figure inside, arms, legs with knee joints and roller skates- and the torso had a wind-up chrome-plated drill bit w/ poorly-moving On/Off switch.
It was a mixture of dark brown and tan ABS, no paint apps or decals.
The shoulders, neck, and hips were friction peg joints, while knees were factory-assembled friction joints. An additional pair of unused friction pegs sat atop the tan shoulders, and the head, arms and legs were interchangeable between all of the 7 pegs.
ONe arm ended in a claw, while the other ended in a non-functional two-barrel blaster.
It came with a mini comic booklet, but I can't remember if it was on a card or in a box since I got it as a gift in the early 80s. I don't know if it was in Japanese or English because it's been so long since I had it.

I've never tried looking for any info on it, but your review reminded me of it, or rather some of the other toys seen on that box.

Except for the "roller skates", I think you just described the Starriors Crank bot...About halfway down this web page: http://jamspeed.blogspot.com/2009/01/starriors.html

Under each foot was a pair of black ABS rolling bars that acted as skates. The cockpit could not be opened.

So was I right- does this Crank being to this same toy line? I know nothing about its origins, or even of it is a bootleg.

Well you got your wish for proper transforming Tomy bots since now Tomy owns everything Takara ever did :D

Oh man, you are totally wrong! This IS terrific! Good god, the fact that it turns into an "animal" is just hilarious! Non-descript animal-robot GO! Also, the ship mode is pretty cool and reminds me of old side-scrolling shooters. This is fantastic! I love it!

I loved it when I was a kid. It fit in with my Starriors/ Wheeled Warrios/ Micronauts pretty well! Oddly enough, I remember that it smelled different than my other plastic toys. Weird!

That's what I think of when I see the animal mode.

I find it hilarious that someone actually called a toy robot "nav-el". Like...seriously, guys, nobody giggled? Not even once?

Everyone's positive reactions are softening my perhaps too-harsh "meh" conclusion. In my defense, the exquisite Tri-Fly ( http://www.collectiondx.com/toy_review/transistor_robots_trifly) has ruined me for all other kooky triple-changers.

Eva, you are indeed thinking of a Starrior. If I wasn't clear, that's one of them in the first pic. Each features a wind-up action torso with interchangeable limbs. They ain't too bad, all things considered, but less interesting than the ZOIDS. Microfans should pay attention though. As in many other things, the estimable Microbry is responsible for my interest in them. Maybe I'll cover some in the future.

I don't really care about these robots,but my one totally illogical toy fetish is 80's Tomy windups. Like Strolling Bowling and such. I only have a handfull but I love em.