The Machine Robo: Revenge of Cronos TV anime had an interesting relationship with the popular Bandai toy line it was meant to promote. While the show did feature a few normal Machine Robo toys as regular cast members, the rest of the pantheon was relegated to bit parts like townsfolk or unfortunate victims of the local fauna. Even when Rom Stoll and his gang amassed an army of transformable troops, you'd often see the same toy playing different characters from episode to episode (often with a different voice). Despite this seemingly inane approach, the show did appear to invigorate the buying public and did well enough to warrant a few sequels and spin-offs. The reason I am mentioning all this is because I sought out this particular toy mainly because of how it was used in the anime. 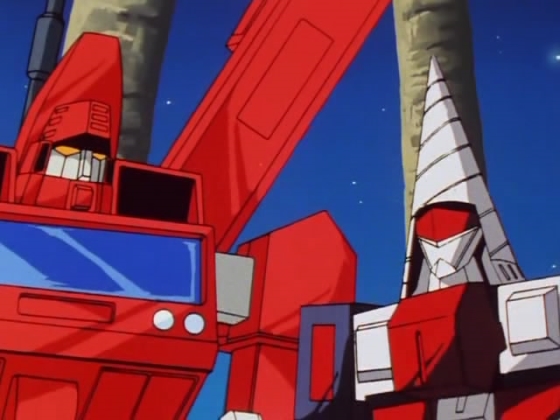 This is Trim Spanser the Tank Transer with his childhood friend, Rod Drill. Rom and the gang happen upon Trim as he's transporting some mysterious macguffin material across the great rainbow deserts. Trim is trying to keep this stuff out of the hands of the local king who wants to use it to create a powerful bomb that is totally not a nuclear weapon but still gives you the kind of cancer that makes you explode and various other nasty things. Because I insist all my heavy drama be acted out by boxy toy robots, I found this episode to be a particular stand out. Also it didn't hurt that the late Kaneto Shiozawa was the voice of Trim so I got to hear the man who breathed life into both Rei from Fist of the North Star and Paul von Oberstein from Legend of the Galactic Heroes scream about using the fury of the sands to crush his enemies.

Revenge of Cronos is an excellent show. 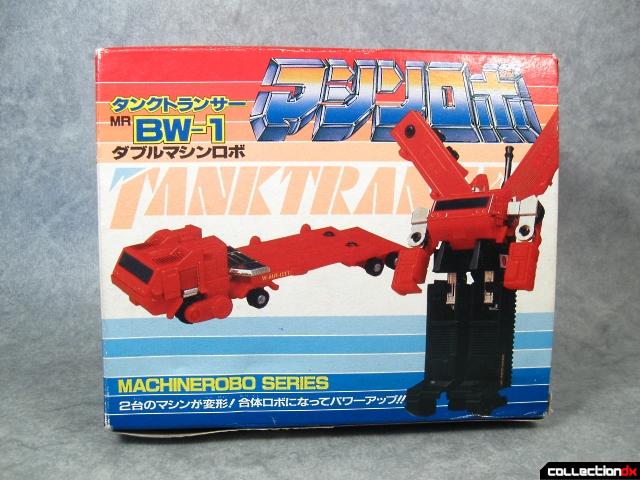 Thanks to ToyboxDX member, Repairtechjon, I was able to acquire my own little Trim Spanser in very good condition! The Double Machine Robo Tank Transer was originally released in 1985 with the BW-1 number and then later in 1986 as a tie in to the anime. The box is a very attractive mid-80's design and has a neat gimmick. One side features a photo of the robot mode with a picture of the truck component... 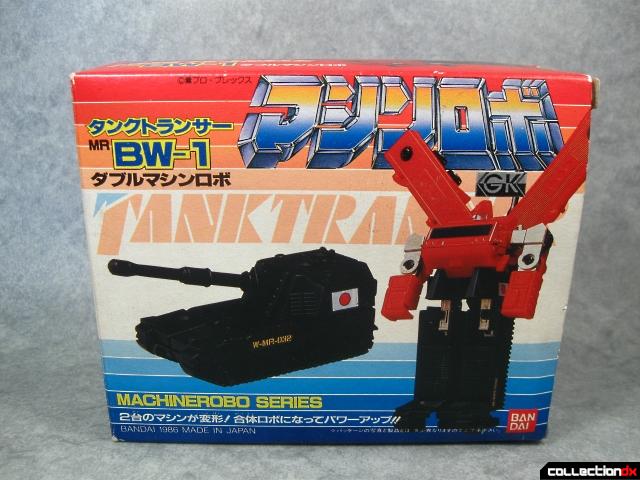 While the other shows the tank part. Note that the "BW-1" number denotes that Trim is a member of the Battle Tribe and is a double (W) Machine Robo. 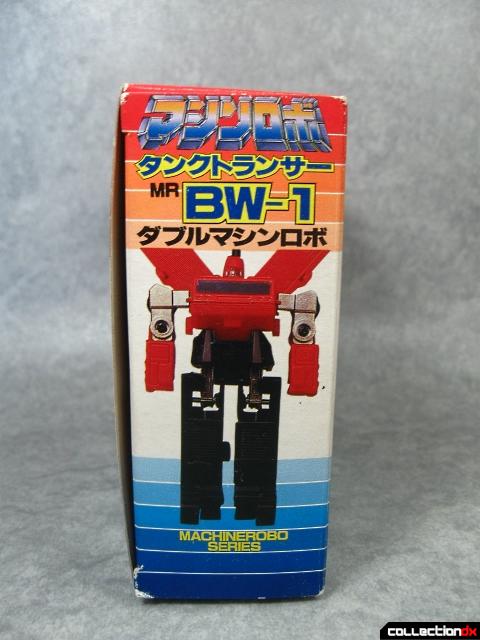 The sides show a nice front view of the robot mode. 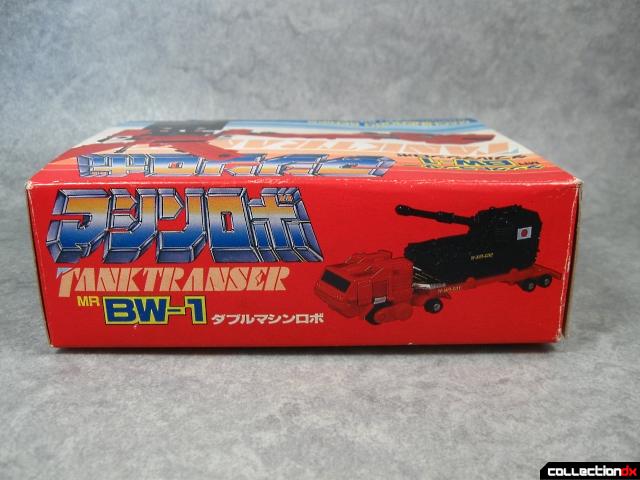 While the top and bottom show the two vehicles together. 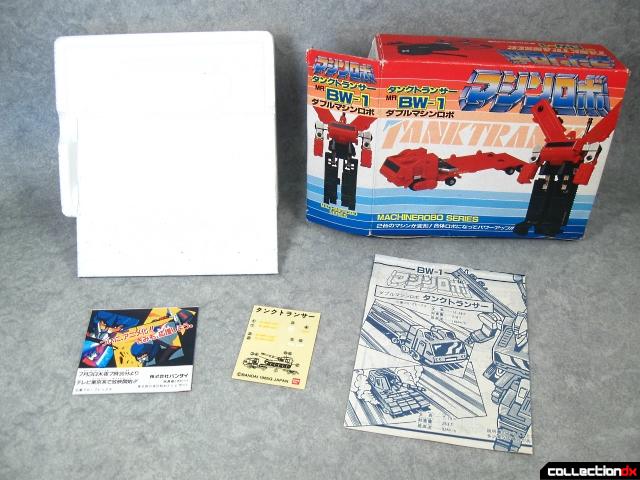 There's some cool goodies inside the package in addition to the toy itself. You get a small catalog, instructions, and stickers for the Tank Transer. 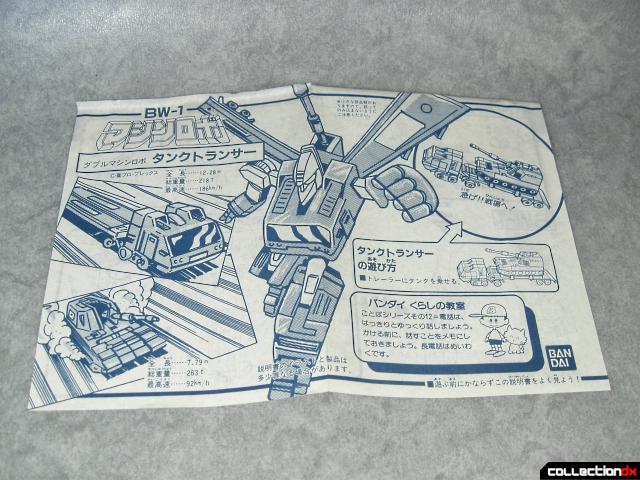 One side of the instructions has some cool illustrations of the toy with some real robot specs! 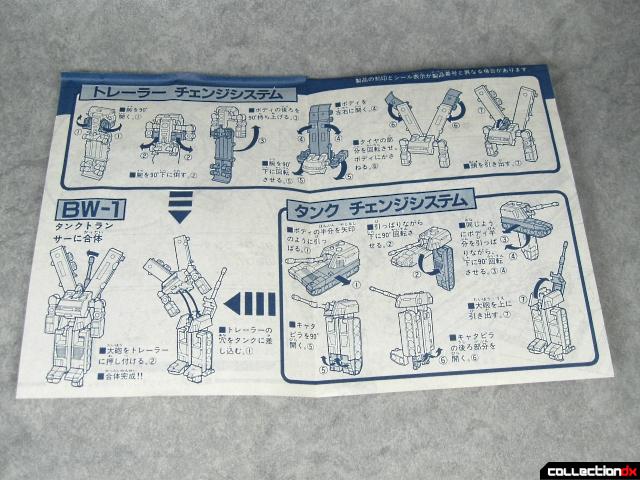 The other side has the actual directions on how to transform the figure. 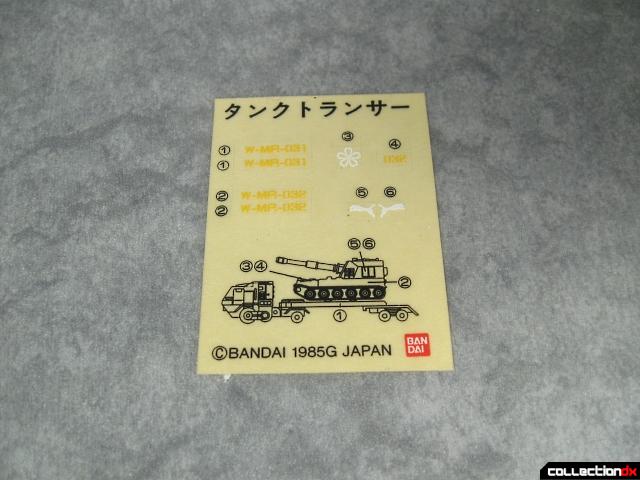 The stickers are glossy clear type decals that include such things as the "W-MR-03" number which is molded onto the toy and even the cherry blossom seal used by the Japanese armed forces. 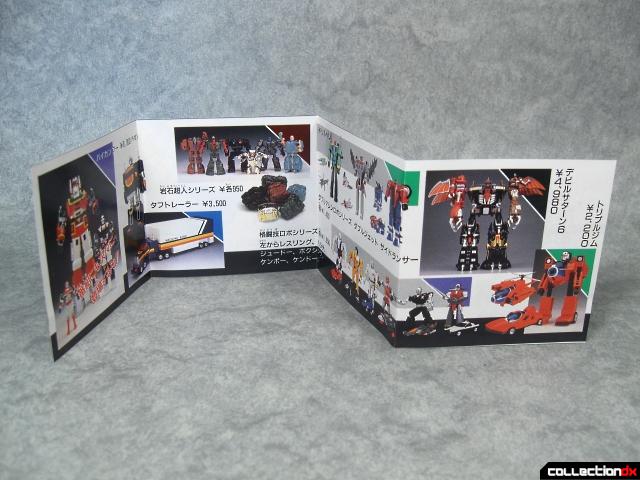 Within the catalog are advertisements for upcoming Machine Robo toys both re-releases and new tie-ins to the anime. 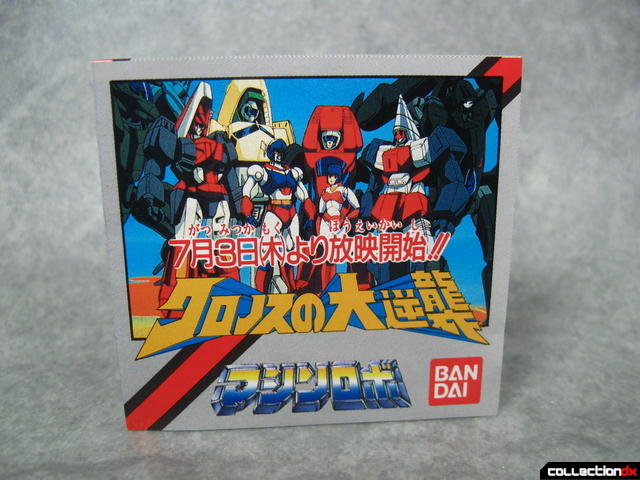 Machine Robo: Revenge of Cronos started July 3rd, 1986. Only the front row of characters ended up being series regulars. The New Shinkansen Robo and Super Car Robo showed up in bit parts with the other two mysterious designs never making an appearance. 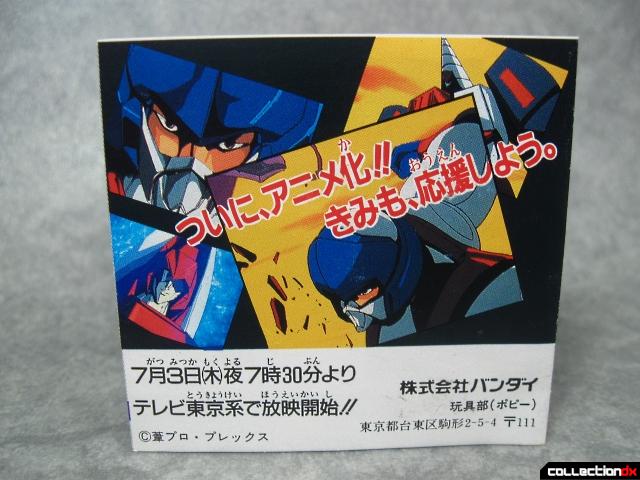 That is what the people call Ashi Productions! 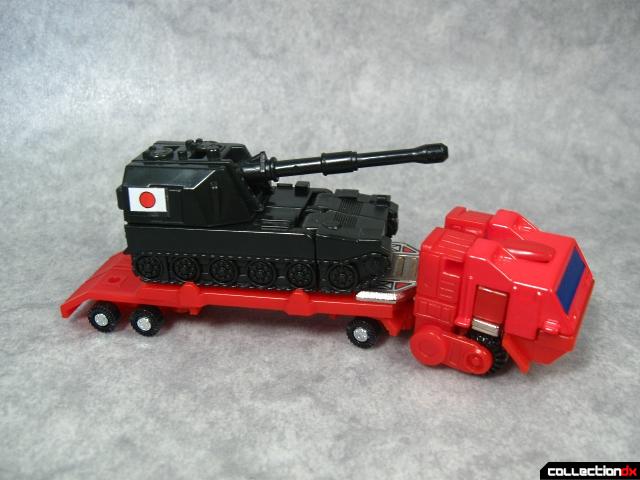 And so onto the toy itself. As a Double Machine Robo, the Tank Transer consists of two vehicles with the red truck portion being about four and a half inches in length. The truck can "transer" or transport the tank around on a full set of rolling wheels. A nice bit of engineering is how the tank is secured by four little clips sticking out of the flatbed trailer. 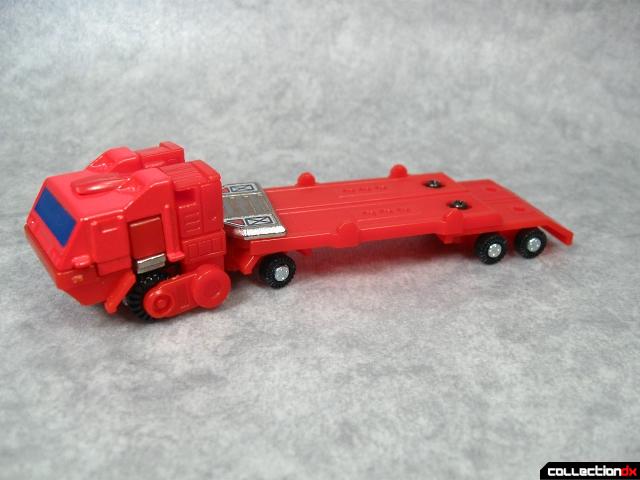 The transport truck is a cool design inspired by the heavy lift vehicles used by the military. It has the majority of the toy's diecast content with the whole cab of the truck and articulated trailer hitch being metal. 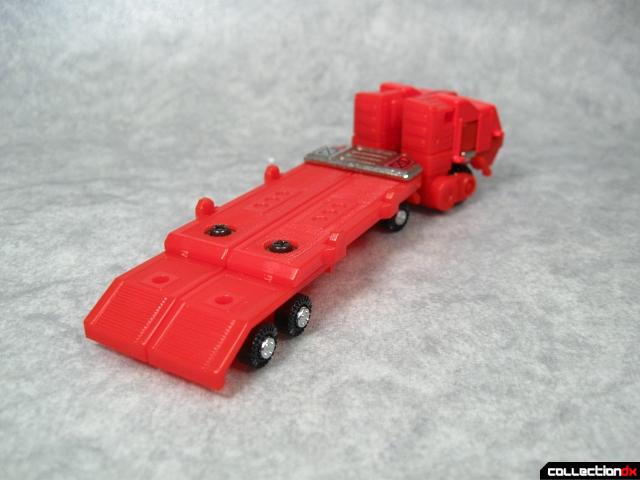 I like all the tiny details molded onto the transport truck as it gives the toy a sense that it is much larger than it actually is. 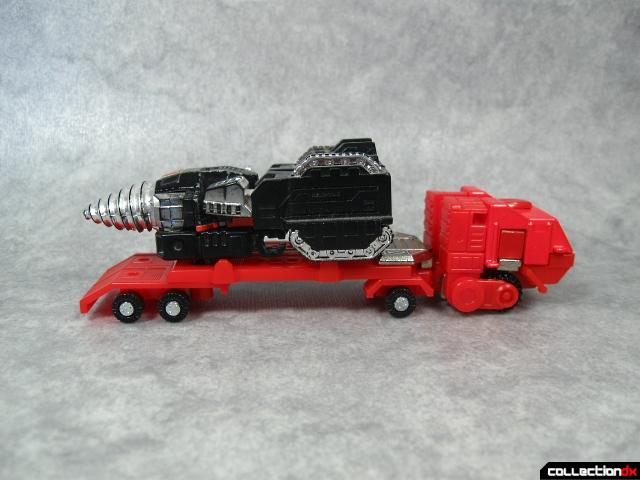 You can even stick regular Machine Robo figures on the flatbed so Trim can tote them around. 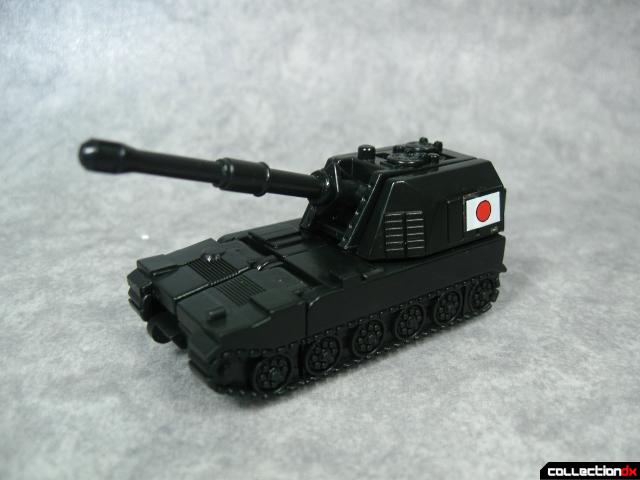 The tank portion (actually a self propelled artillery gun) is rather small as it is barely two inches long. Out of the box it has a pair of Japanese Self Defense Force emblems applied to either side. It can happily roll around on hidden wheels underneath the non-working treads.

Prometheum5 has informed me design is probably based on a Type-99 Self-Propelled Howitzer. 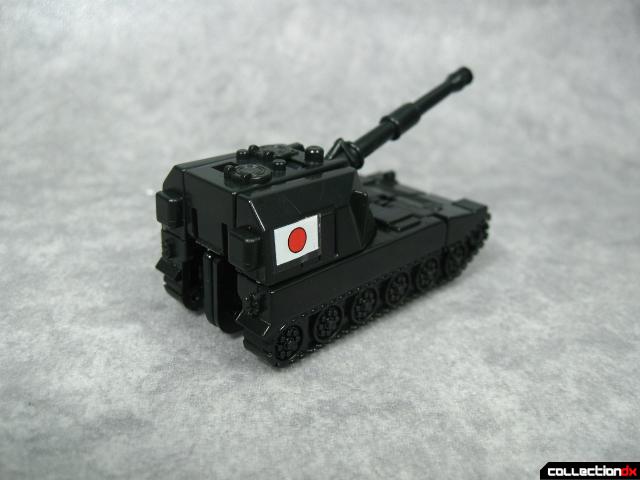 Only the hidden leg joints are diecast so the tank feels a lot lighter than the truck component. 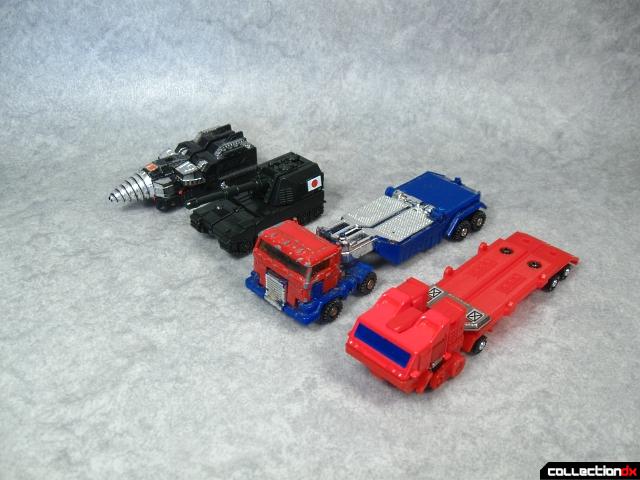 When I first saw pictures of the Double Machine Robos, I thought they were about as big as the DX figures but that turned out not to be the case. It is pretty neat how they really are just two regular Machine Robo figures in one, hence the name. 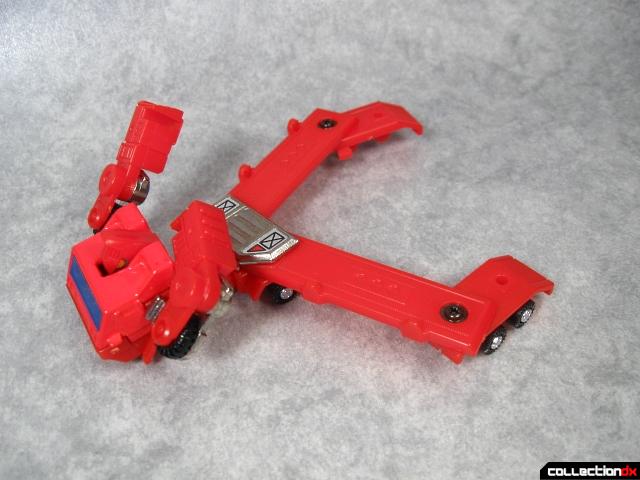 Transforming the truck component is a simple but well engineered affair where the arms unfurl from the back of the cab while the trailer swings up and splits in half to form "wings." Trim's head flips up from where you'd expect it to. 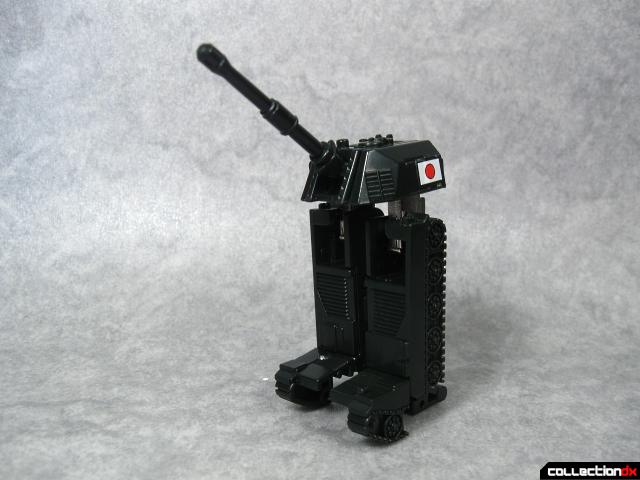 Changing the tank portion into a pair of legs is a bit more fiddly as this part uses springs to lock the main body of the tank into different positions. You have to pull the sides of the tank outward and then rotate them down where they get locked in place by the spring loaded axles. The diecast thighs also pull down a bit but don't appear to lock in the extended position. While the design is quite clever, it feels almost too much for such a small package and depends on the springs holding their tension years later.

And if you stop right here, you get a real Vertical Tank! 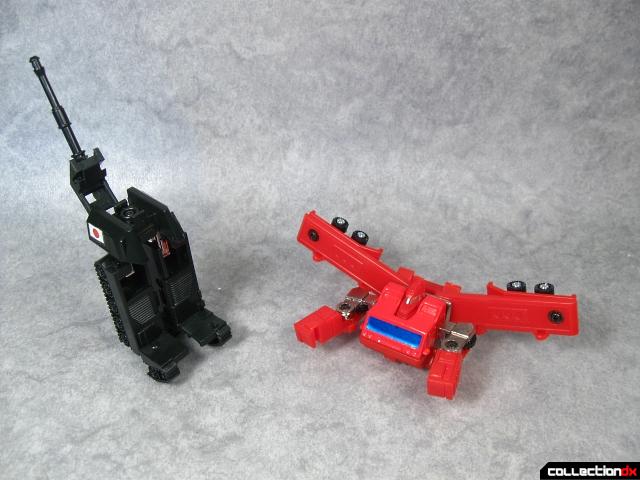 Just flip up the main gun to expose a pair of tabs that clip into the bottom of the upper body. 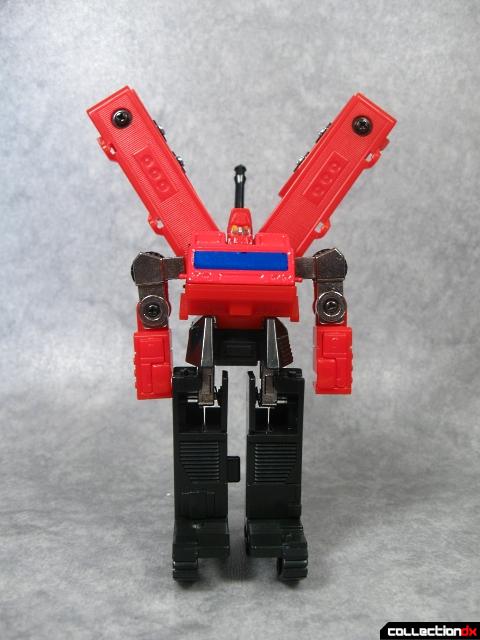 And so here is Trim Spanser the Tank Transer in robot mode. He's a rather handsome little guy who stands about four inches tall from head to toe. The large wings on his back give Trim a lot of presence despite his average size. 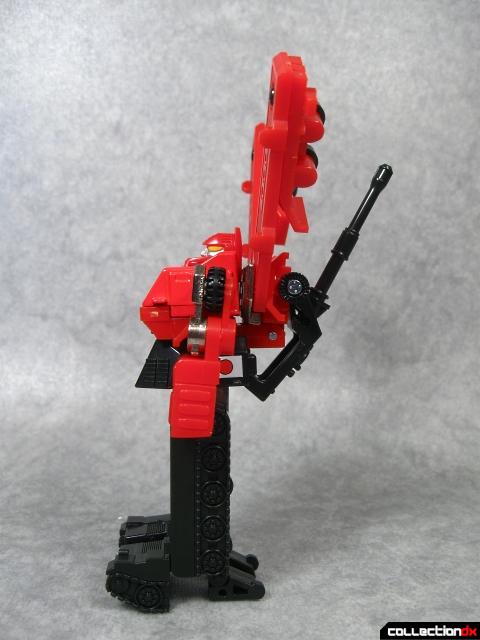 Heel struts on his feet allow him to stand relatively well considering he's got a big chunk of diecast for a chest. 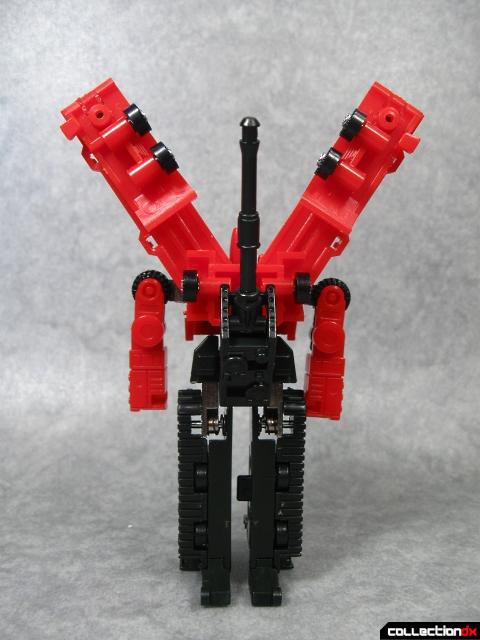 The tank gun folds up against his back without actually locking in place. 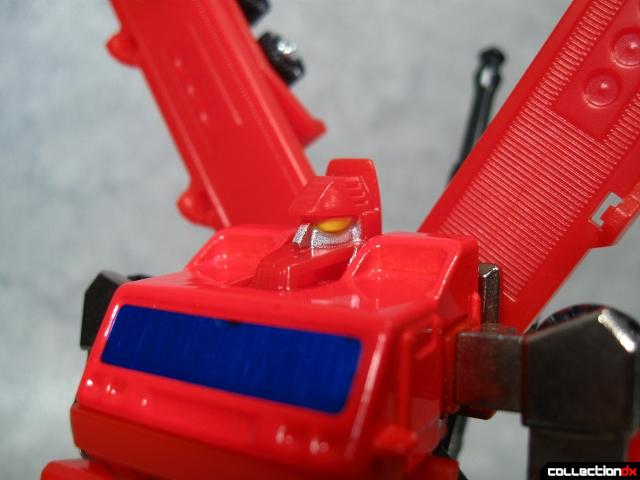 Trim has a rather unique looking head design that is about as long as it is tall. I was surprised to see it so faithfully recreated in the anime. If this was Transformers or Gobots, the animators would have tried to humanize such a weird robotic face. 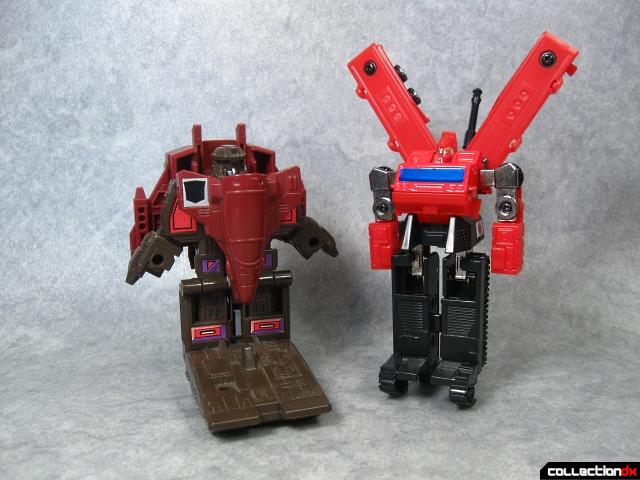 Speaking of Machine Robo's external rival, the closet Transformers equivalent at the time would be the Duocons. It is here where the very different design approaches come are made apparent as Flywheels is a much simpler toy than the Tank Transer. However the Duocon is a thousand times more durable and is the kind of figure you could give to a child even today whereas the Double Machine Robo is more of a transformable puzzle. 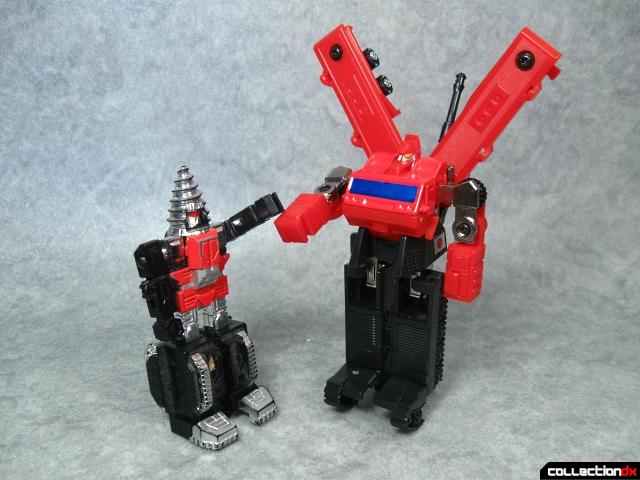 Getting back to Machine Robo, Trim Spanser the Tank Transer is about the right size to hang out with his BFF Drill. Like most Machine Robo toys, Trim has minimal articulation with just his arms being able to rotate.

The Double Machine Robo Tank Transer is an enjoyable piece from the heyday of the line. I am happy to finally own one of these more intricate figures and have a little diecast and plastic Kaneto Shiozawa for my shelves. Like a lot of Machine Robo toys, these can go for anywhere from 2,000 - 6,000 yen at Japanese retailers depending on their condition. It was also sold in Europe as a Robo Machines Combinator with a tan colored truck component and a French flag on the tank. Once again I'd like to thank Repairtechjon for giving me a good deal on this toy as it is definitely a winner.

And may the memory of Trim Spanser the Tank Transer live on in our hearts.

Trim Spanser the Tank Transer is the heart and soul of this series.

You could've talked more about his transing. Sure, he can trans tanks, and a drill, but what else can he trans?

I'm glad I trans'd this guy along, so you could transor the transor and tank to your table!

Excellent, very "warm" review! Thanks for summarizing the relationship to the anime story of this character, I never knew, as this was out just as I was becoming less interested in the shows and toys as a kid. I like the look of most of this toy line as an adult.
Flatbed trucks get stuffs done! I'll have to dig up some pics of that tan variant you mention.

I see a lot of interesting looking things in that catalog. Can you identify them for me? What's the red triple-changer in the bottom left corner of the catalog. And what's the giant red robot on the far right panel? Thanks!

The triple changing robot is Triple Jim and the big robot is Baikanfu which is Rom Stoll's giant battle armor thing.

The big truck in that same catalog--is that a Sentai mech for the Godaikin line, or a Machine Robo?

That's Tough Trailer who was remolded from Titan Boy from the sentai show Flashman. He's a character in Revenge of Cronos.

I have Tough Trailer and his mold buddy Pro Truck Racer. I could probably review those if people wanted it.

That's ok. The answer is still the same :3

Great review, great figure! I now need to looking for this and the other "double machine robo"

Now I need help.
Who can tell me the names/# of the other "double mr"?

The hunt begins, i'd like to add the tank transer to my collection..
if anyone has one they'd like to sell please let me know.