Let’s get this out of the way: the Stone Wing looks like, ah, how to put this delicately? The stone wing looks as if it would be more at home in an outhouse than a toybox. If you can get past that, this is a terrific toy. The same absurd premise of the Rock Lords affects the Stone Wing. If we’re imagining such a thing as an animate rock-monster, that’s fine. But what on earth would inspire a rock monster to build an aircraft out of rock? If the rock monsters have enough understanding of physics and engineering to build a jet-powered flying machine, you’d think that they’d avoid rock as a building material. Is it because they’re made of rock? Humans don’t build flesh bicycles just because we’re made of meat. You need to suspend disbelief and just accept the Stone Wing for what it is: a heavy, fun, dung-shaped rock spaceship. The stone wing has two configurations, a ground vehicle and an aircraft. 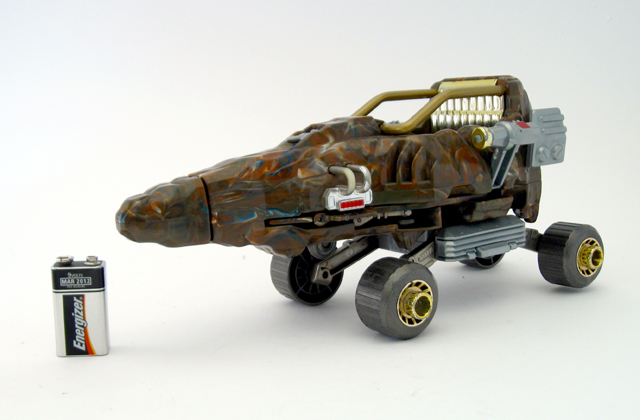 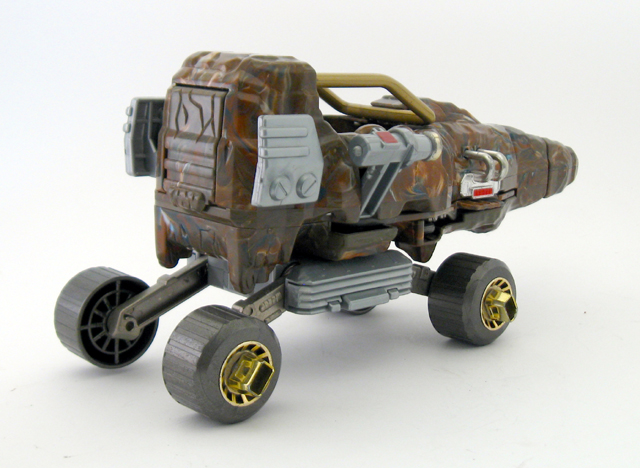 Transformation to aircraft mode is simple and intuitive. You rotate the spring-mounted wheel-base ninety degrees, pull out the concealed wings from the fuselage, rotate the wheels up, and pull down the landing gear. 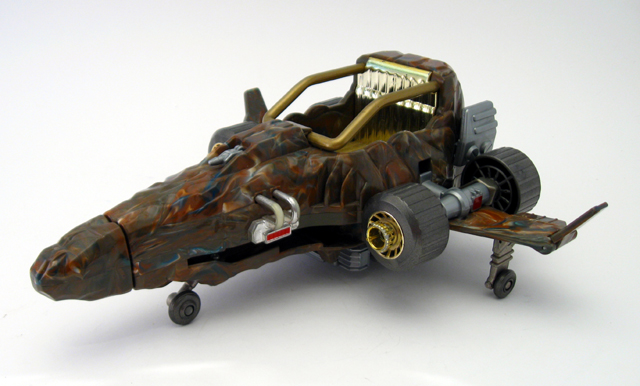 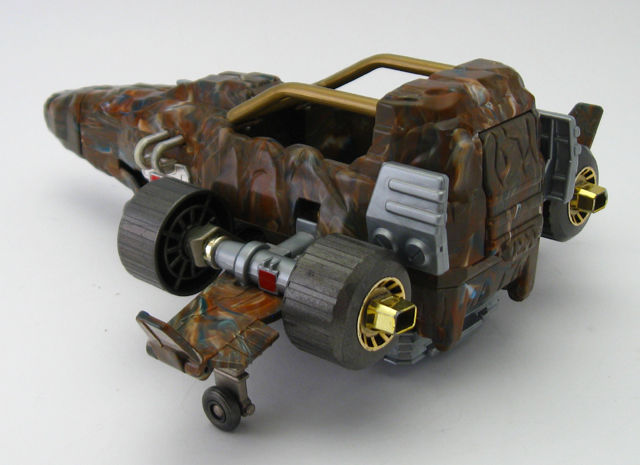 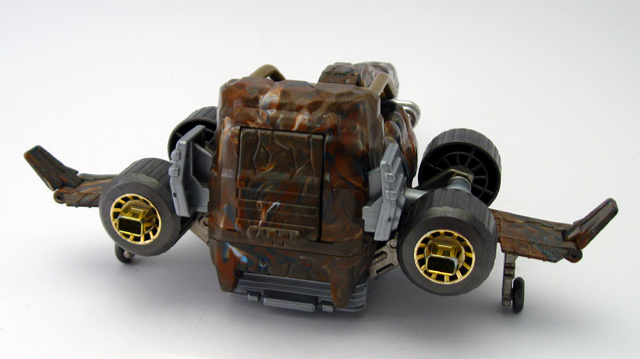 As I said, this thing is heavy. Far heavier than you’d expect for a gobot vehicle (my bathroom scale says 1.6 pounds). It’s as heavy, or heavier, than most Popynica. There has to be some non-visible metal somewhere, because the visible pieces don’t account for the heft. Visible diecast consists of landing gear struts, wheel/engine struts and the battering ram arm. 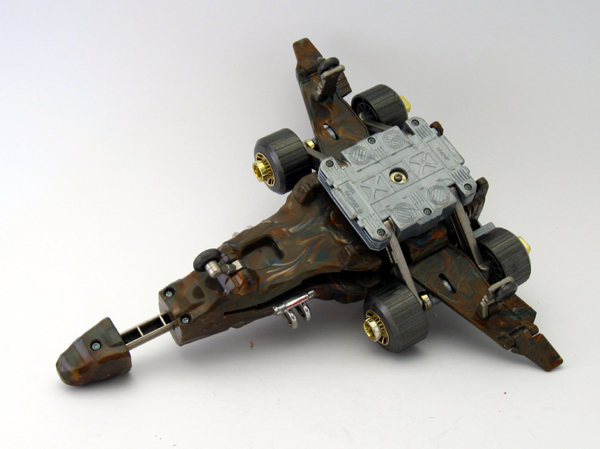 The battering ram is activated by pressing a button on the fuselage. 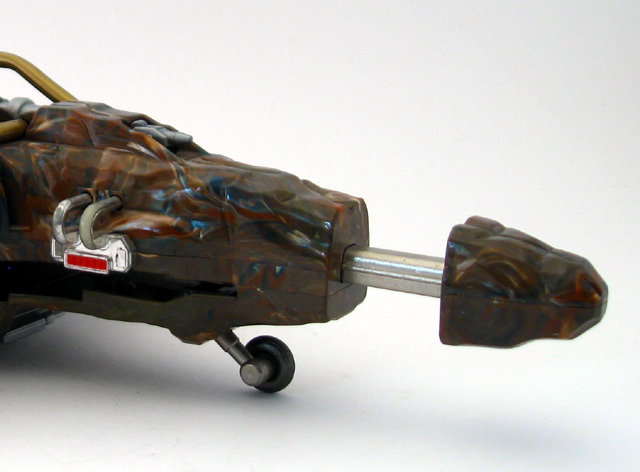 A concealed missile placement opens from the rear. 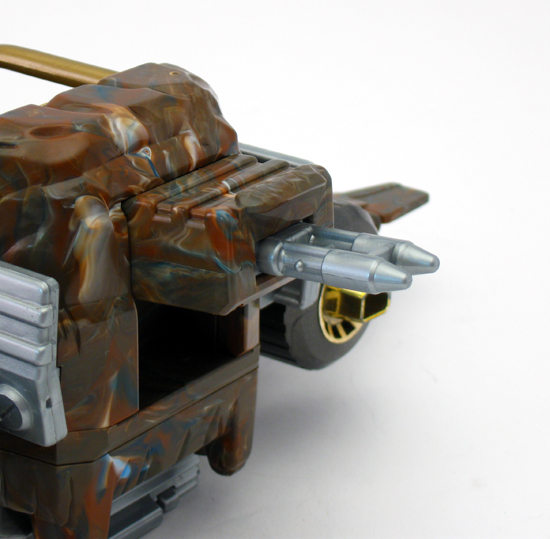 The swirled ABS plastic used throughout is pretty unique. I’ve only seen it used on the Rock Lords. 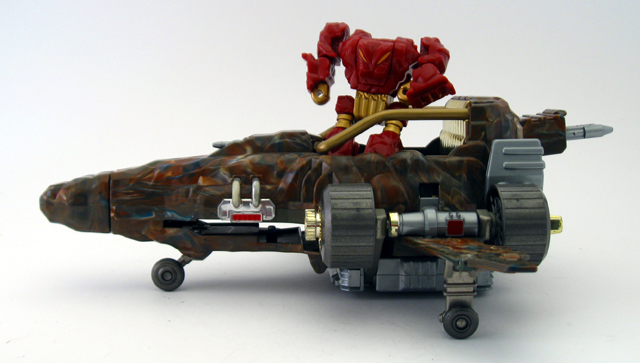 This is a finely crafted and high quality toy, and worth picking up if you are into the Rock Lords or unusual toys.

11 comments posted
I was gonna say it is a

there is a resemblance. I also get an x-wing vibe.

Wow,this thing is cool. I don't really miss being a kid,but I miss the aesthetic of 80's toys. This thing just looks so more badass to me than all the sleek,curved,Applesque stuff of today.

How do the figures sit in it? Can only certain rock lords use it?

The cockpit is just a big blocky open space. There's a kind of chair, but all RL's fit equally well.

Just a seven year-late FYI that this vehicle is intended to be piloted by Magmar, the leader of the evil Rock Lords.

If we ignore the... obvious comparisons, the colouring on it is astonishing. Now, if only we excreted green matter...

Some of us do!

...Those hubcaps do look like they're made out of corn.

Now that you said it, they do!