In the world of collecting Gobots and Machine Robo toys, sometimes the most mundane looking figures fetch a high price on the aftermarket. Sky-Jack is notable for being somewhat rare on both sides of the pond. As a Machine Robo toy, Tomcat Robo was one of the last regular releases in the 600 series before most of them were re-released as a tie-in to the Revenge of Cronos anime. For whatever reason Tomcat Robo was left out of this relaunch. In the west, Sky-Jack was one of the last small sized Gobots released. So how does this rare bird rate?

Let's do the walk around on this humble gray jet dude. 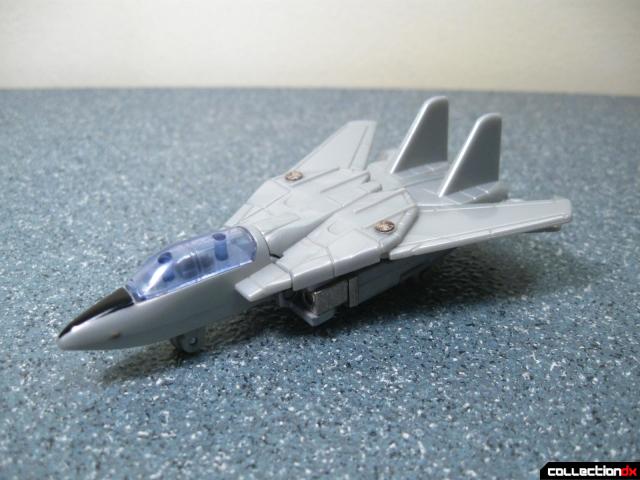 Sky-Jack's jet mode is the familiar F-14 Tomcat and is a little under four inches long. My loose figure is lacking the small stickers that go on his nosecone and tail fins. 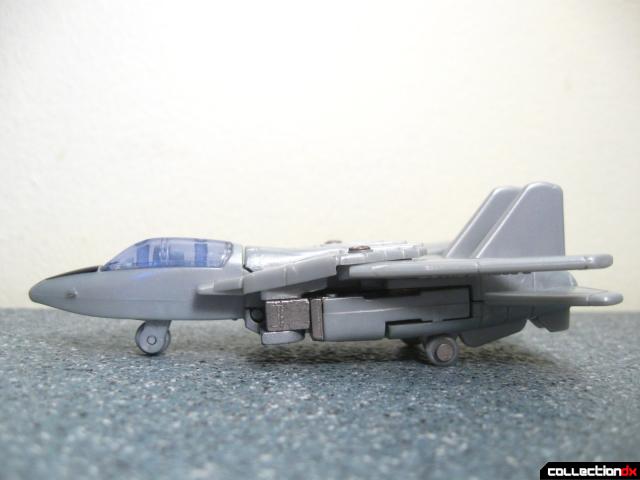 In jet mode, Sky-Jack can roll around on a full set of landing gear. He has a good amount of heft thanks to all the diecast used in his construction. Most notably the whole midsection and parts of the arms are metal. 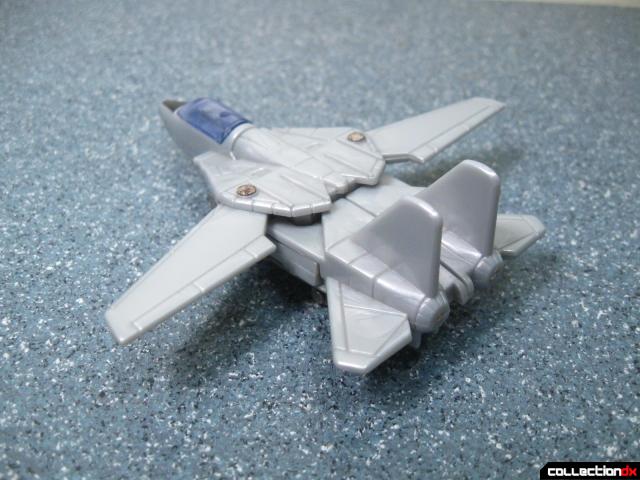 Like any toy of the Tomcat worth its salt, Sky-Jack has movable wings. Detail wise, he looks a bit more toy-like than the other Gobots jets with a rather chunky take on the classic lines of an F-14. 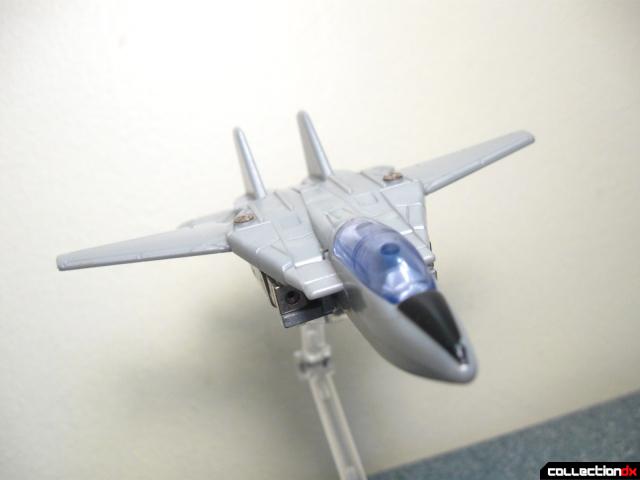 A retractable nose wheel is a nice little touch. It lets you put Sky-Jack in the sky with some semblance of authenticity. 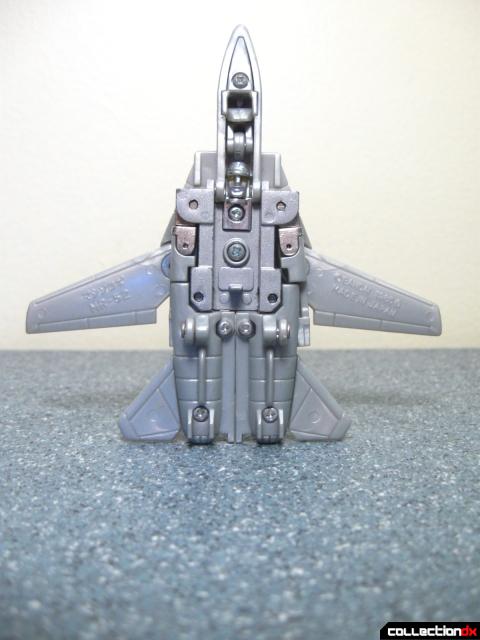 From the underside Sky-Jack bares all as you can see his little chrome dome and beady eyes staring back at you. 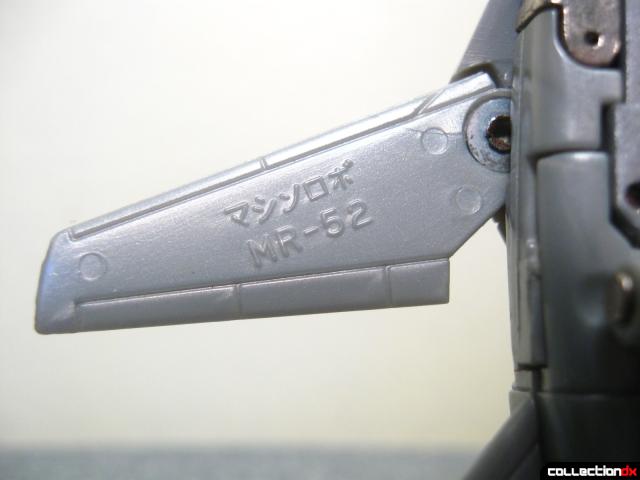 Under the right wing is his Machine Robo number of MR-52. 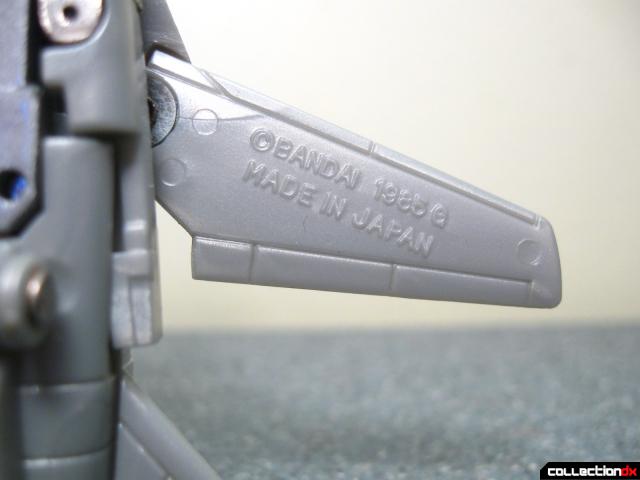 Under his left wing is the Bandai 1985 copyright. Sky-Jack was even made in Japan. 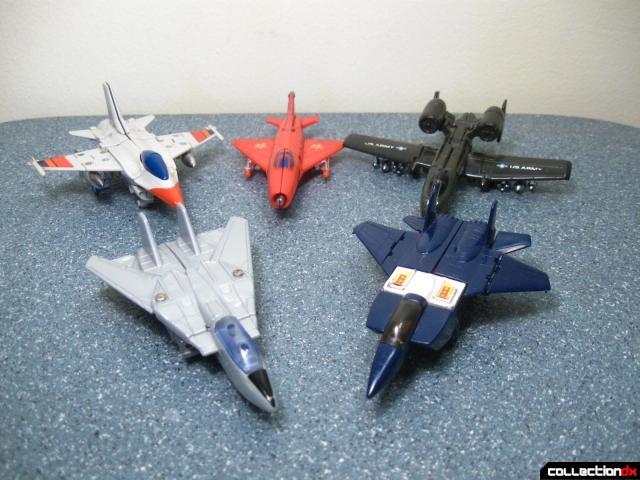 He looks right at home alongside his fellow Gobot jets. 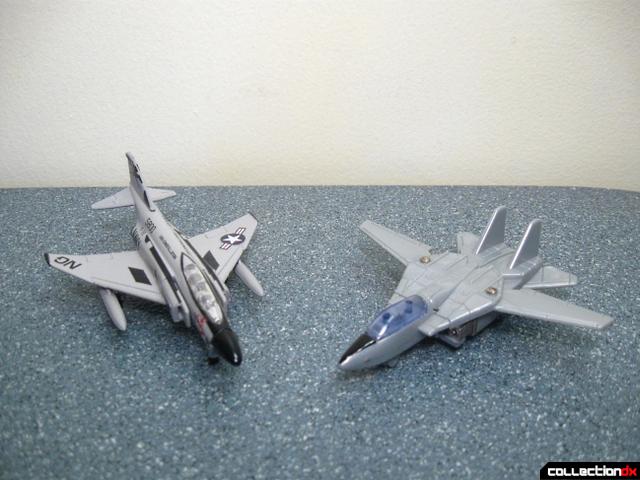 Until I get a Gobot Mach 3, poor Sky-Jack will have to hang around a regular ol' diecast F-4 to feel some naval camaraderie. 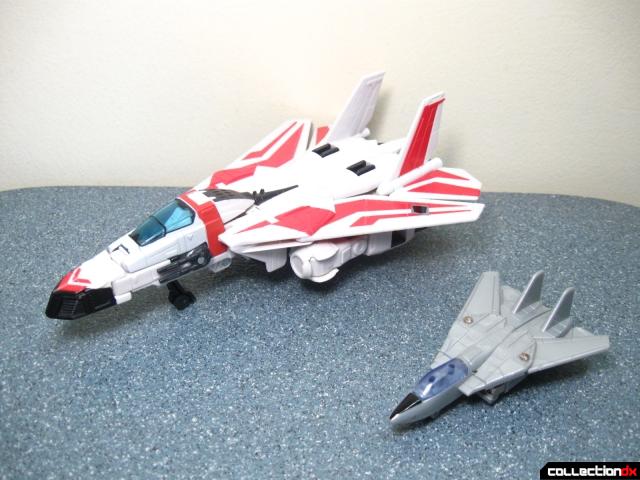 Due to his rarity, Sky-Jack can cost a lot more than other more recent transforming jets, even this other no name guy. 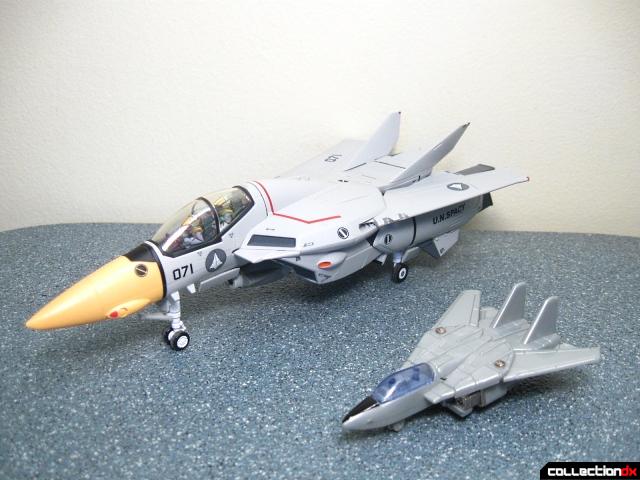 Here's a fun shot of a little transforming F-14 next to everyone's favorite kanzen henkei jet in similar colors. 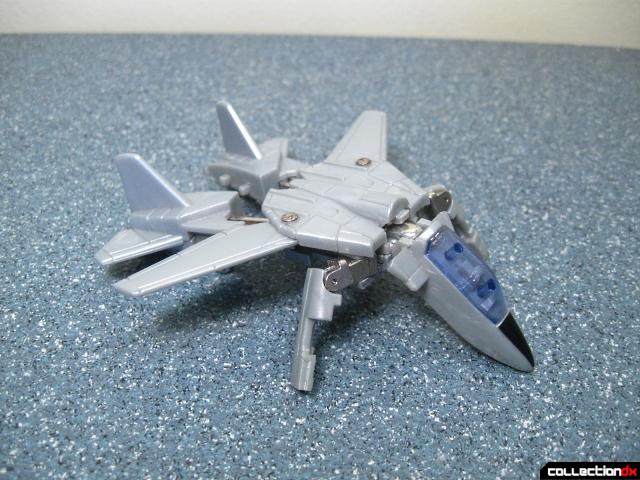 Sky-Jack's transformation is pretty basic and the figure is incredibly durable as a result. 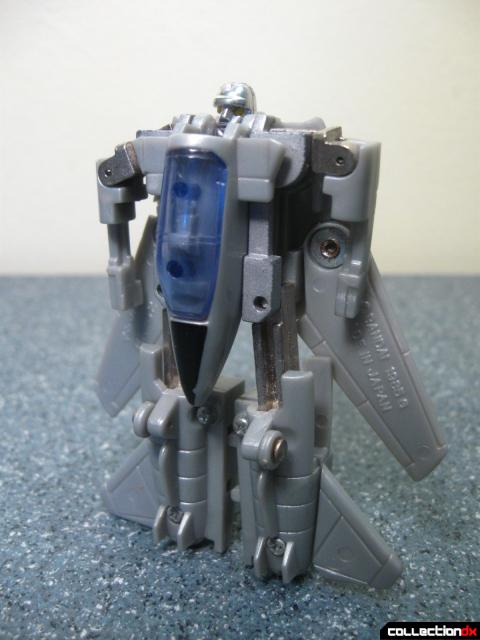 After a three second conversion, Sky-Jack is a rather squat little guy. His arms are just slabs taken out of the sides of the plane. While the rear of the plane extends far enough to reveal actual upper legs, there's nothing more done to give him some real feet. 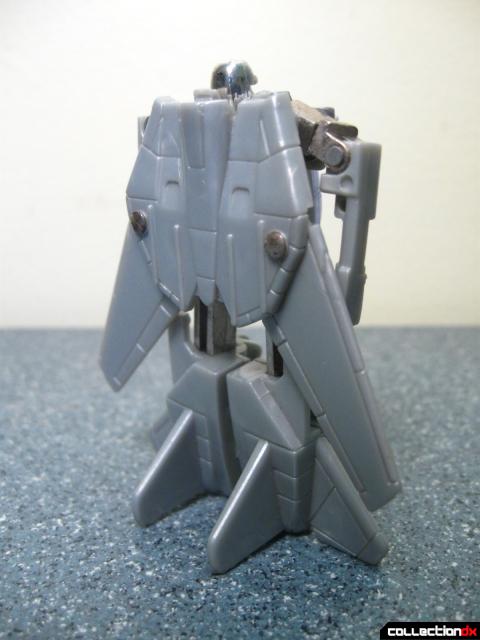 While Sky-Jack is pretty brazen about his skinned Tomcat overcoat, I think he manages to make it work. One thing that emphasizes Sky-Jack's basic design is how he just rests on the end of his tail fins to stand up. 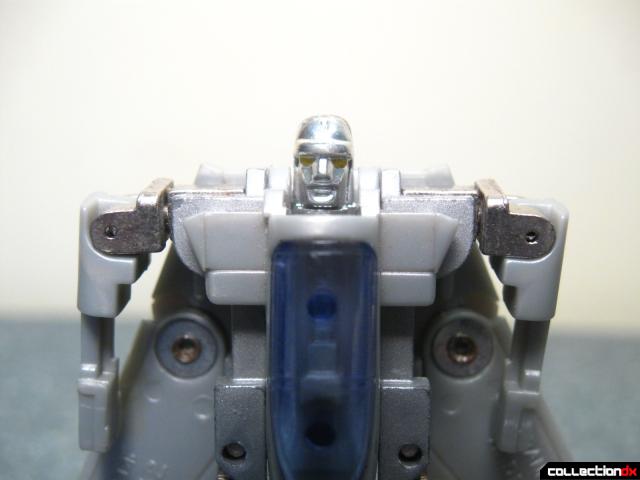 Sky-Jack's weird Moai head noggin is one of the stranger things about him. While other Gobot jets sport more sleek visors and flight helmet looking faces, Sky-Jack looks more like Destro's uncle than a transforming robot. 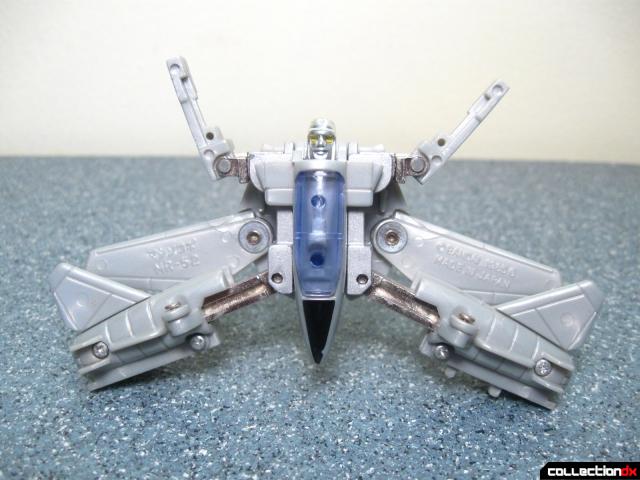 Articulation wise, Sky-Jack's arms and and legs are above average for a Gobot. His arms can swing all the way upward and his legs let him do the splits. While these skills may of no use on the battlefield, amateur gymnastics are a thing Sky-Jack can do and by gum he does them well. 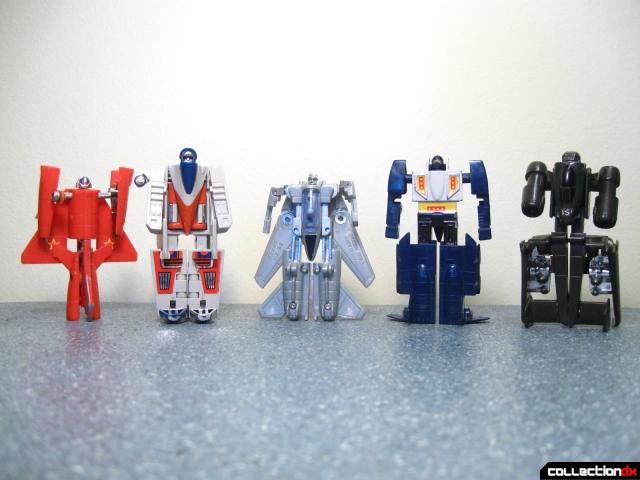 Alongside other Gobot jets, Sky-Jack can look a bit tiny. Don't make fun of his size or you might start an international incident. 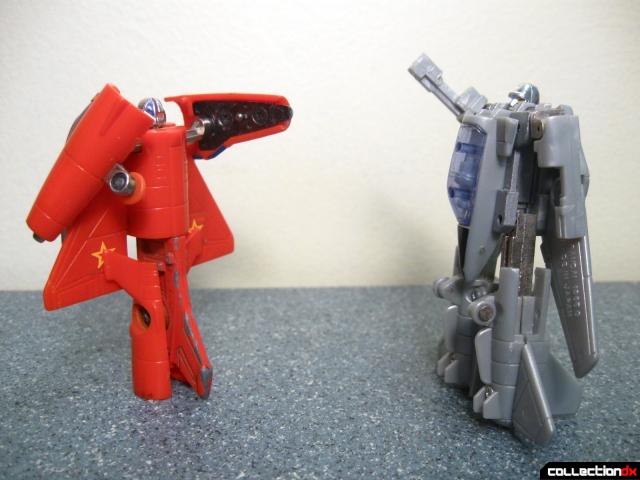 "I am tired of dealing with a tiny capitalist pig like you! "

"Why don't you come over here and say that you no legged Russian dog!" 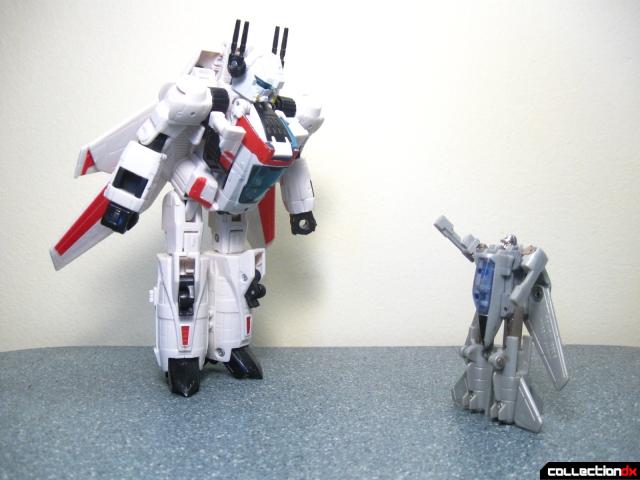 Sky-Jack still gets along with the larger guys though.

"Howdy stranger! Did you know that the both of us are the subject of a fascinating discussion on intellectual property and robot toy design?"

And sometimes he can even find a deeper kinship with them. 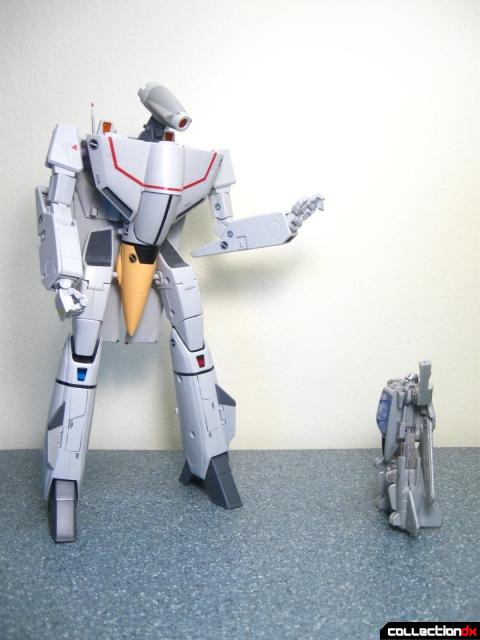 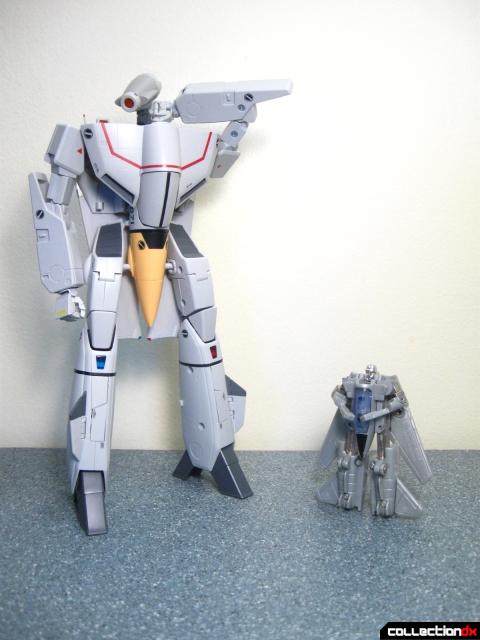 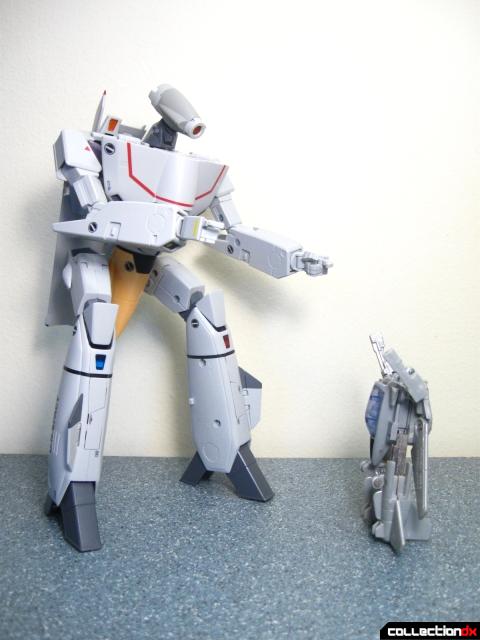 "DUDE I REALLY DIG YOUR STYLE!"

Overall Sky-Jack is another solid Gobot. While he's not the prettiest thing in either mode, he's got enough charm to carry him through and plenty of durability to make up for the rest. His rarity on both sides of the pond means he often goes for more than the average Gobot on the aftermarket. When looking to buy a Sky-Jack, I'd often see them going for over $30 on eBay. I happened to spy him in a sizable lot of Gobots for around the same price so I jumped on the chance to get him. The whole lot had a ton of great figures I'd never owned before so overall I felt pretty lucky. While I don't believe Sky-Jack is worth overpaying for by himself I still recommend picking him up if you can get a good deal.

2 comments posted
For something that's rare he

For something that's rare he does kinda look cute!

Also, The argument between Sky-Jack and Gunnyr made me lol

Keep it up! I love these Gobot/Machine Robo reviews.