Fading American toy manufacturer Arco released a handful of licensed Gobot and Robotech toys in the mid-eighties. The garish Gobot cap and squirt gun toys were common, if not exactly popular. There were also a few one-off molds, including the Binoculars, a Battleship, and Cannon. Typically, the Robotech releases were just more subtly decorated versions of the Gobot branded toys. but the Cannon mold was only released under the Robotech brand. Cannon is among the rarest of the Arco transformers.

Cannon is packaged in a huge, colorful window box. Inside, the toy rests in a flimsy plastic tray. Accessories consist of two missiles and four ball projectiles (more on those in a minute). 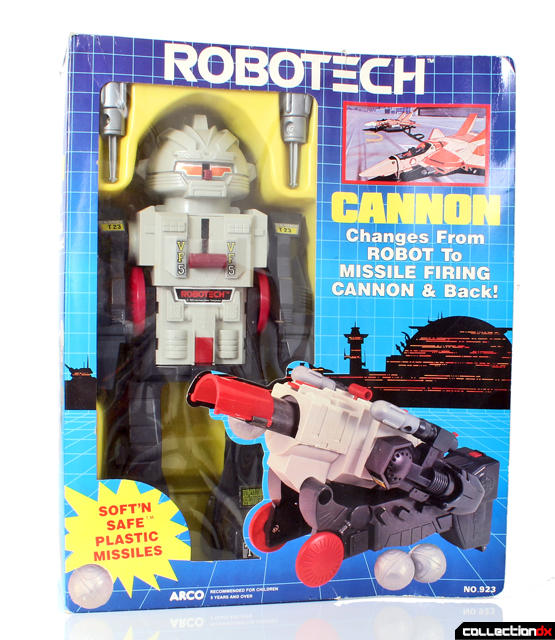 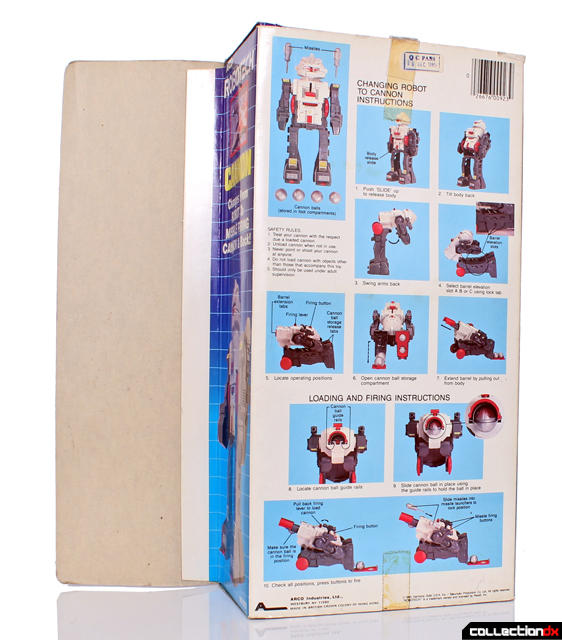 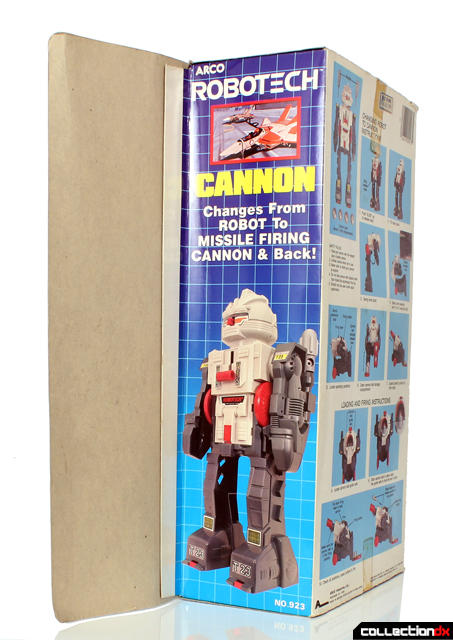 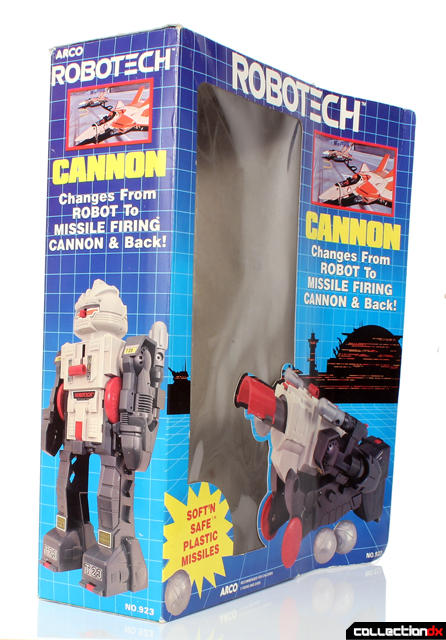 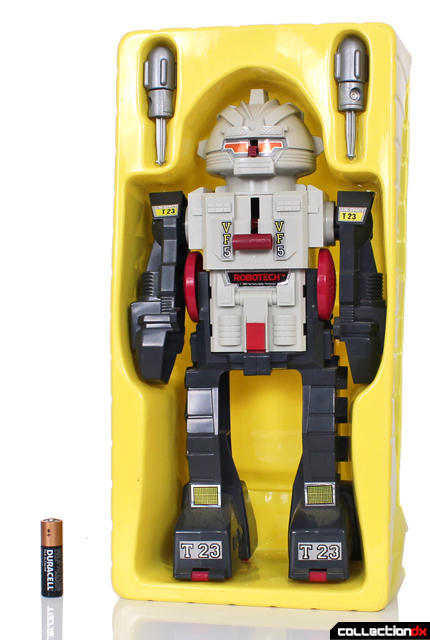 The figure design is pretty sophisticated as these things go. The proportions work well, the color palette is subtle, the decals understated. Sure, there’s that big goofy head with a trigger for a nose, but this is Arco. For Arco, this is a serious bot. 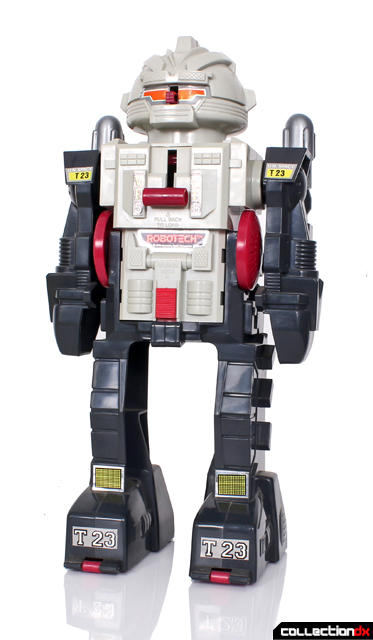 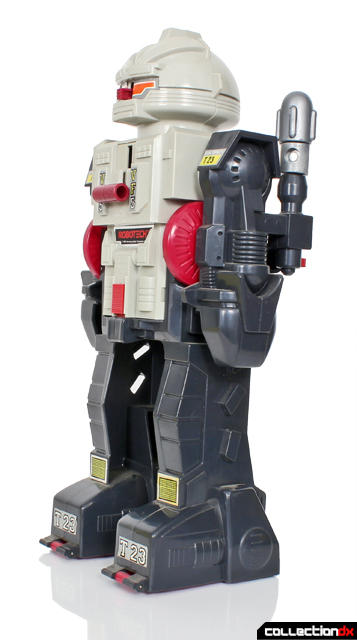 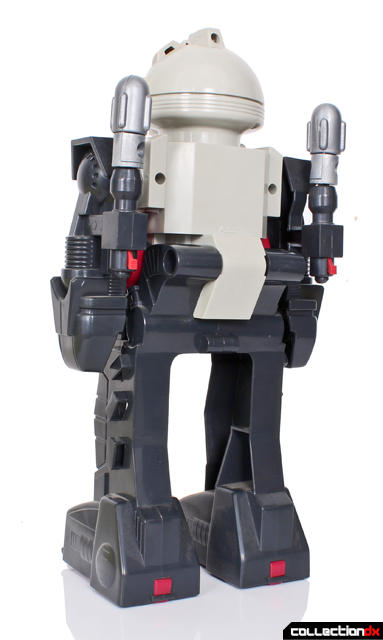 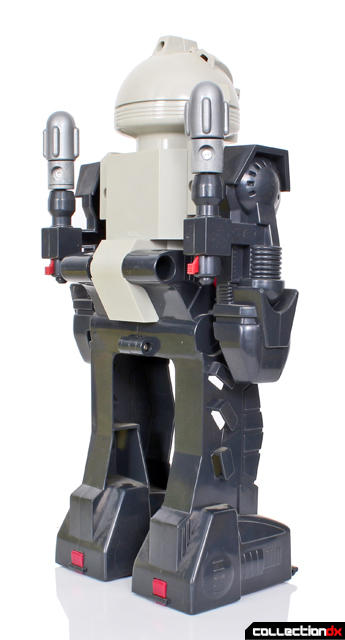 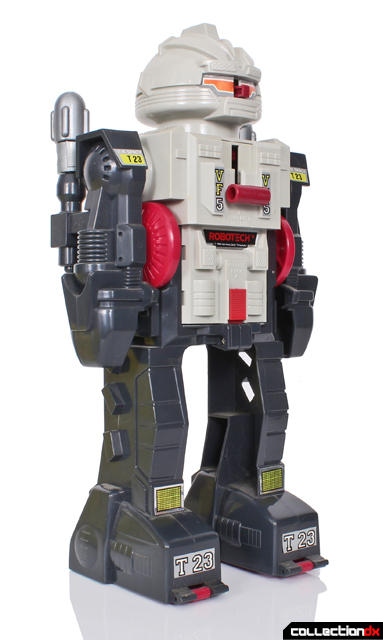 The mechanical features are nicely integrated into the design. All of the moving parts are dark red.

Articulation is limited to the clicky shoulders. 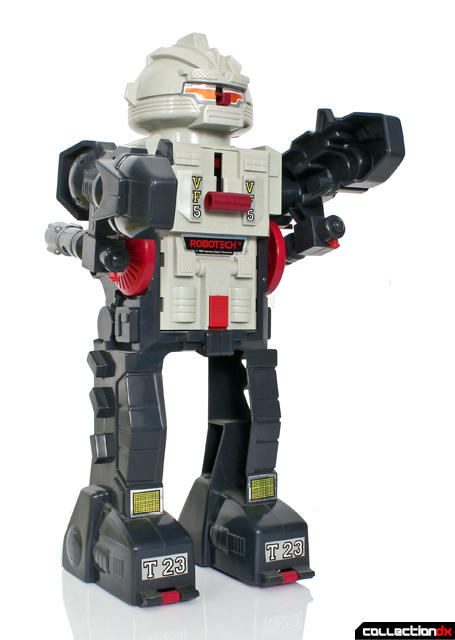 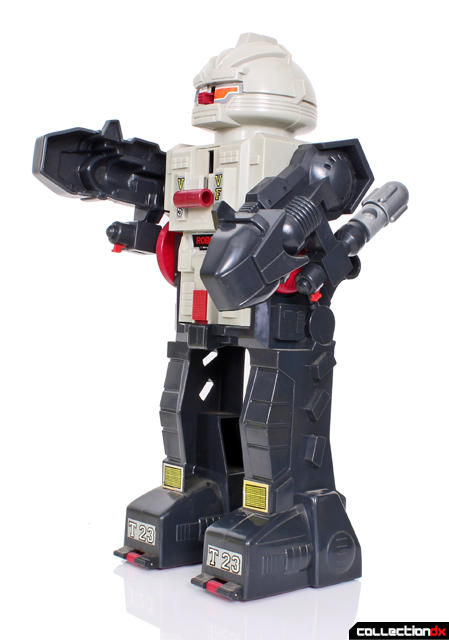 Remember the projectiles I mentioned? They are stored in his feet. Instead of just making dumb compartments, they added these holes so that the balls become a design feature. A nice touch. 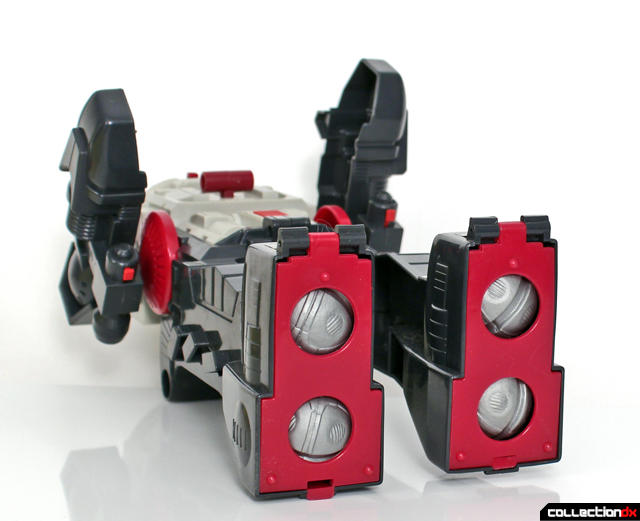 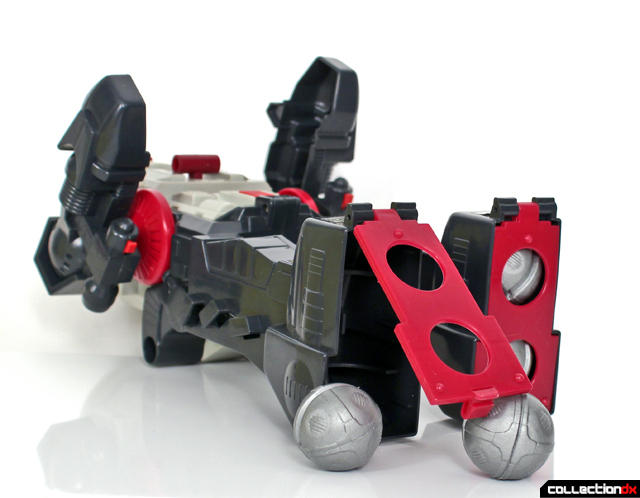 The transformation, such as it is, is dead simple. You merely slide the button at his waist and bend him in half. The Cannon barrel telescopes out from his crotch. 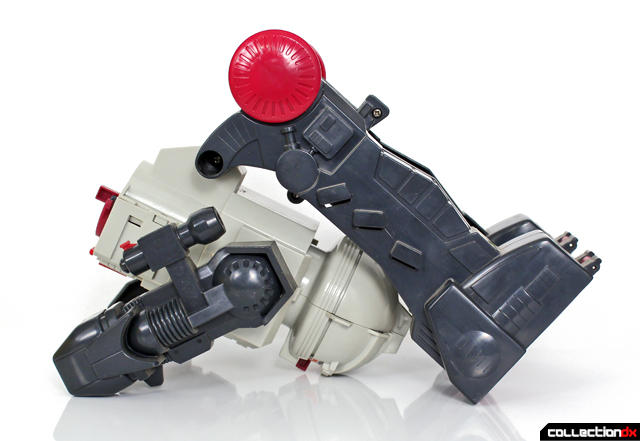 The cannon mode is, well, certainly a cannon. It’s fine and it does what it needs to do. It’s not that much worse looking than Galvatron. 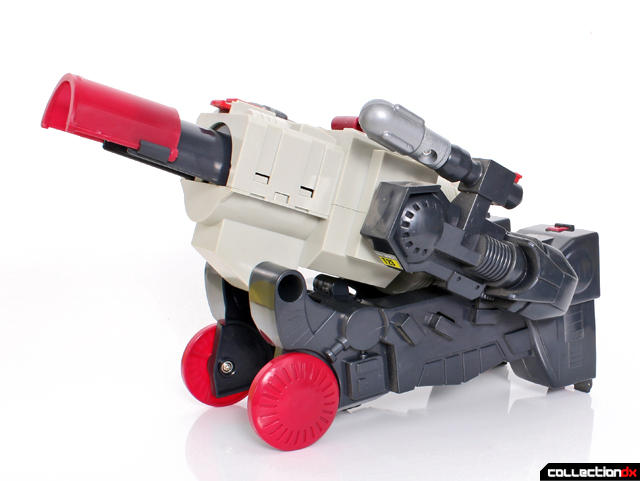 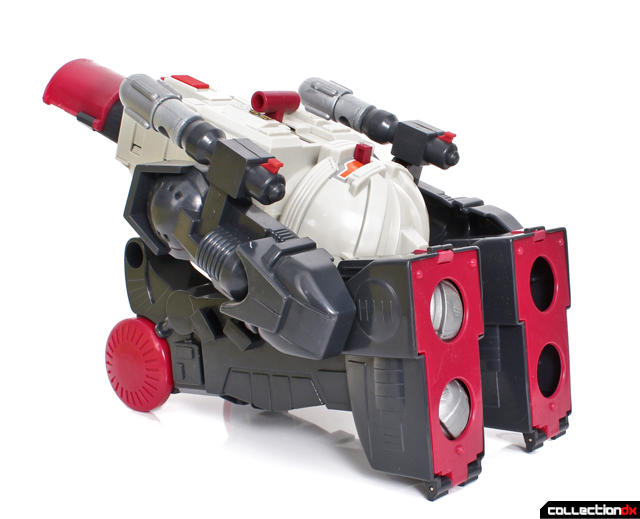 Another neat design feature: The arms can lock into three different positions in the legs to pitch the barrel at different angles. 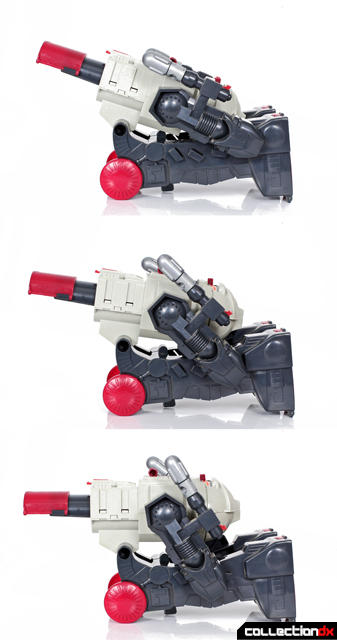 To fire, you place a ball snugly under the base of the barrel, cock the firing pin by pulling back the lever on the chest, and release/fire with that nose trigger. 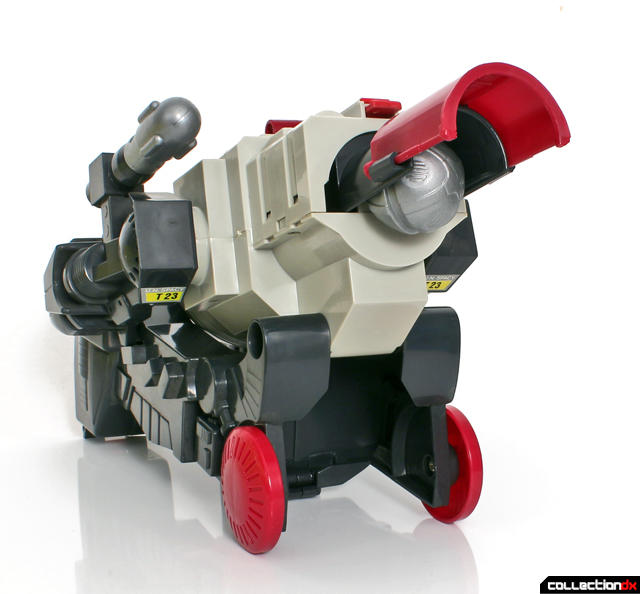 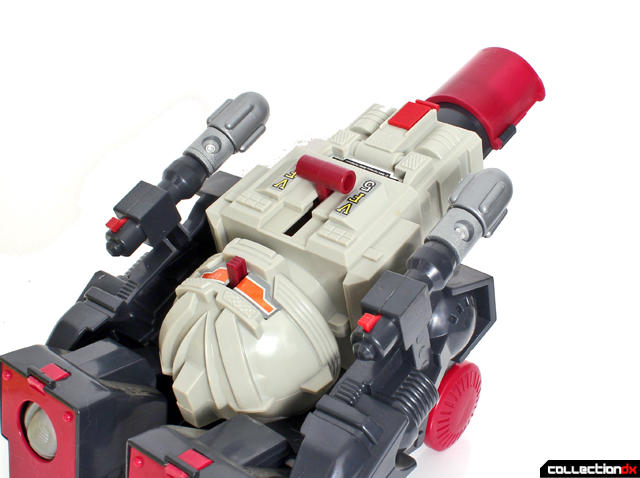 I’m actually impressed with this piece. It’s a fun, effective plaything executed with a unique style and thoughtful flourishes. It’s easy to dismiss Arco’s bots as thriftstore junk, but there were talented designers behind these toys, and a little serious attention is well rewarded. And you’ll never accidentally break them. 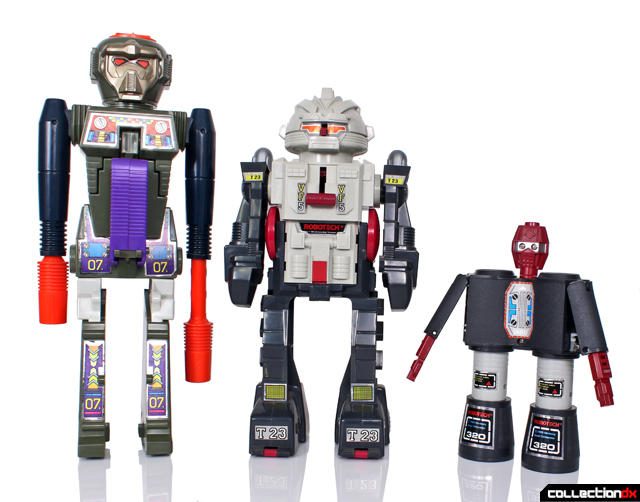 4 comments posted
Are you sure...

...that this is Robotech canon?

The colors remind me of G1 Megatron. And they both turn into guns. Maybe that's what they were going for?

This is one of those toys you get when your grandma asks you what you want for your birthday. That is what happened to me except I got some strange branded Robotech toy that consisted of little, Lego-type guys that could connect to make things like ladders and squares or something. It even came from a yard sale, bless my grandma's heart. LOL

You are thinking of Robolinks by Revell, an imported version of Takara's Blockman line.