I don’t often talk about cost and value much here, because usually to me those things are irrelevant. Now, I don’t mean to say money doesn’t matter, but when I review a toy I am typically looking at whether or not the toy stands on its own merits.

This toy, however, deserves some discussion about value and cost, but first, a little backstory.

Four Star was a company out of China that is best known for making bootlegs of G1 Transformers. The thing about Four Star though, was that they didn’t just make copies of the toys. They used the original toy as a base to create a whole new toy. At the time, yes, they were seen as simple knockoffs, but now collectors are after Four Star bootlegs due to their crazy takes on beloved characters. As these cheap toys were not sold in traditional retail channels, their availability was spotty at best.

Where Four Star succeeded was making basically all-new toys based on existing technology with quality equal to the original. Four Star added gimmicks, created new transformations, and even used diecast metal. To lump them in with garden-vareity bootleggers is a crime unto itself.

Let’s jump back to the summer of 2011, where I was vacationing on Cape Cod with my family. While driving through one of the town centers I spied a shop that looked like it had toys in it. My instincts proved correct and in there was a plethora of pop-culture goodness from the 60s to 80s. There was a shelf of robots (with an insanely overpriced Godaikin Daimos) and on that shelf was a bootleg Machinerobo for $10. Thinking the price was high, I bought it anyway to feed that fix. Next to it was something that looked like Starscream, but in all the wrong colors. I don’t really collect Transformers, but this was new to me, and as such I was drawn to it. I asked the shop keeper about it, and he had no idea, but it was $20.

Vacation ends and I bring it home and finally look it up. My Google-fu tells me it’s a knockoff Starscream by Four Star called simply “Jet Robots”.

Four Star created several different variations of “Jet Robots” but it looks like this one was the most rare.
Since I could find no other one for sale, I had no idea of value. I thought I would hold on to it for now.
The toy at first appears to be a pretty obvious knockoff of Starscream until you actually begin to look at the details. 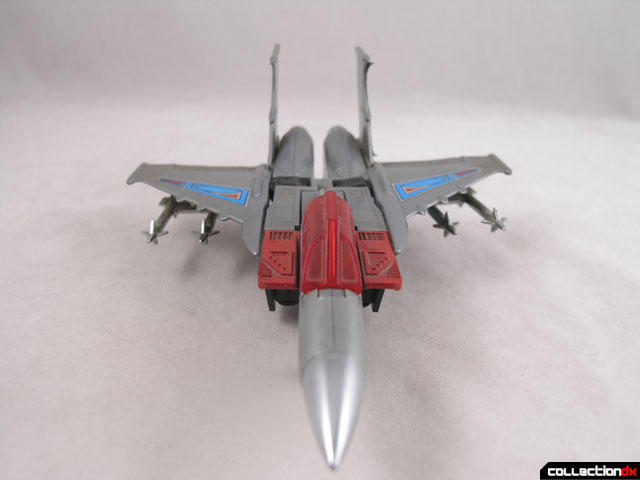 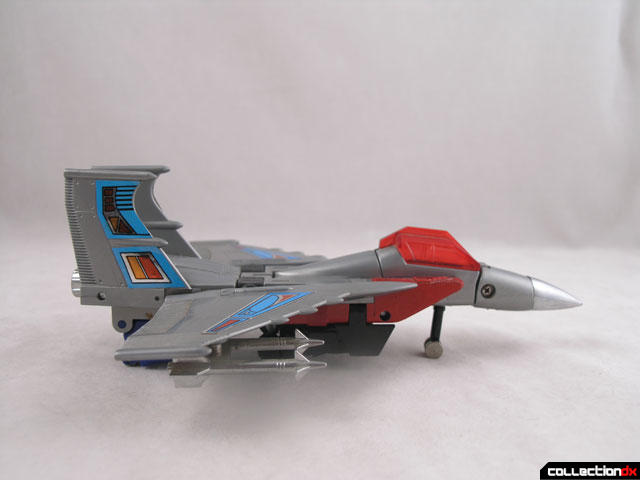 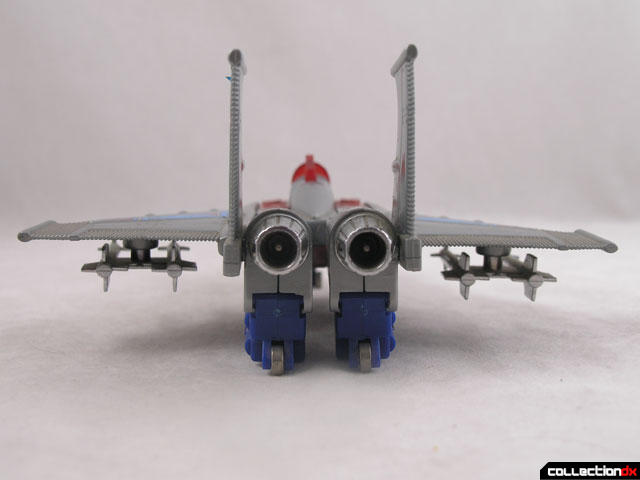 In jet mode, the toy has several modifications from the original design. To start, the rubber nosecone has been replaced with a METAL TIP. 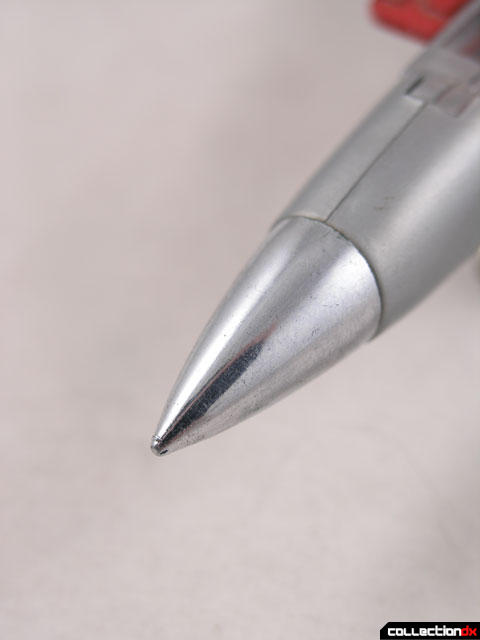 The cockpit has been remodeled and now features an angular cover. 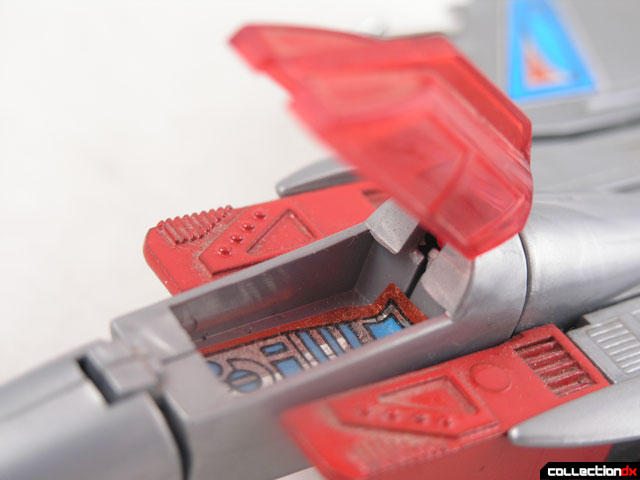 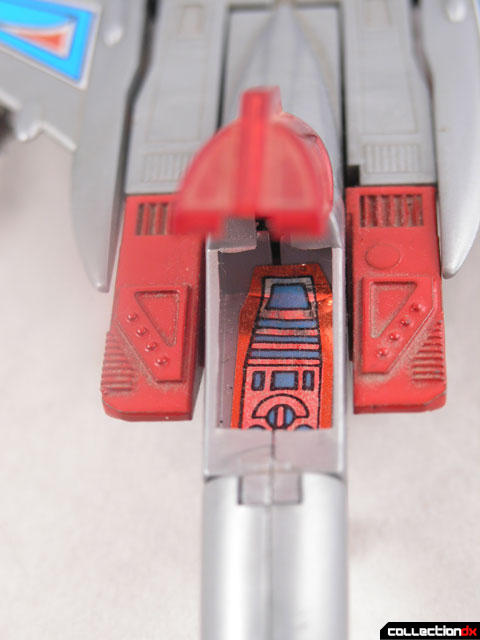 Each wing has been completely redesigned, although you can see how they used the original wings as a base. Instead of missile launchers, the underside of the wings now house chrome missile banks that do not fire. I believe the rear tail fins have been redesigned, but they are missing on this sample. 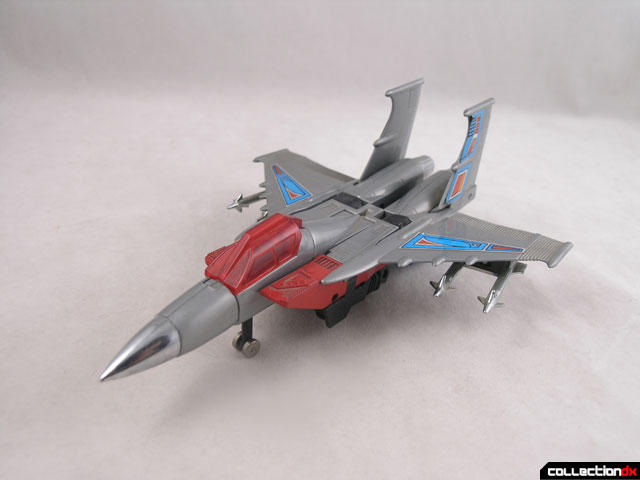 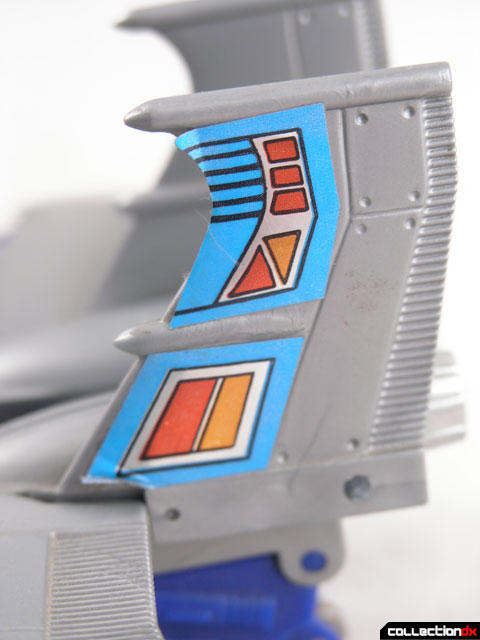 Transformation is where it gets weird.

On the original Starscream, you began by bending the nose section down and then pushing out the arms from the section just behind the cockpit. This mechanism has been completely changed for the Four Star version. Instead of arms, there is now a panel on a hinge that must be opened to swivel the cockpit around. 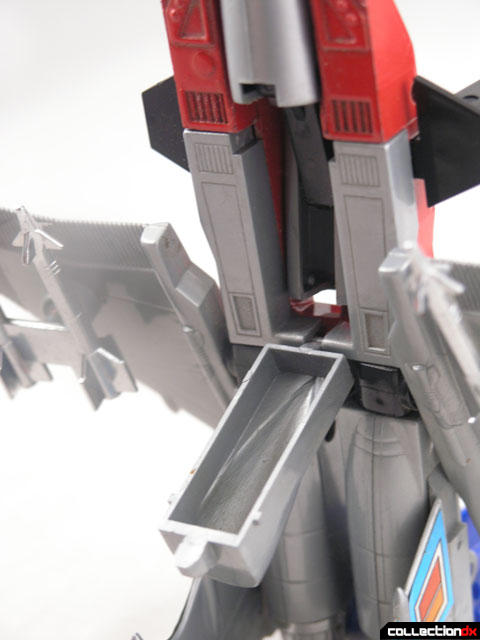 The arms are entirely new – resembling the arms from HOUND rather than starscream. They are attached to the metal body and store under the wings in fighter mode. Articulation is weird, but so is everything else about this toy. 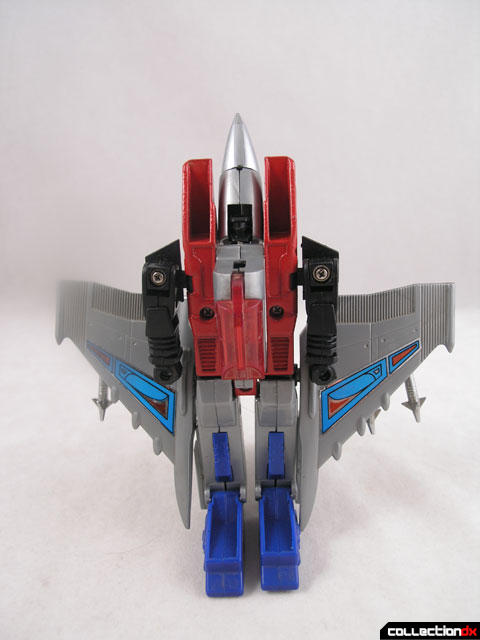 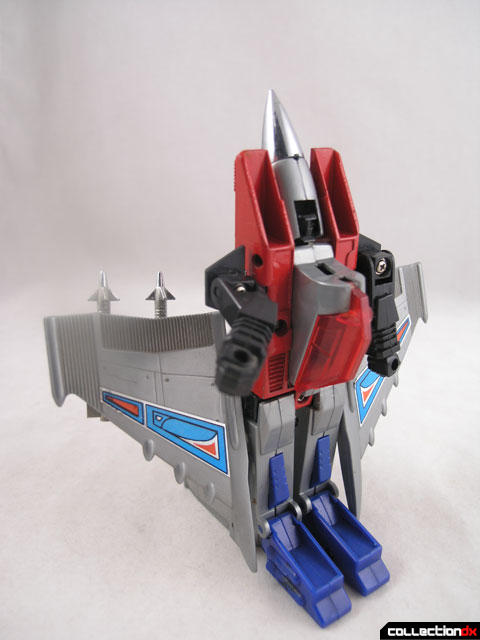 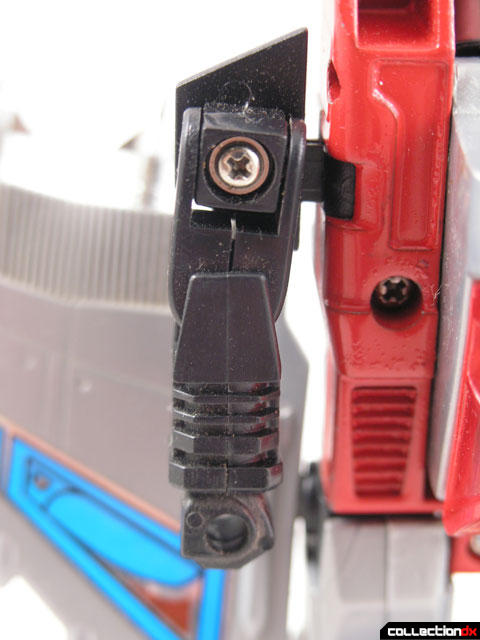 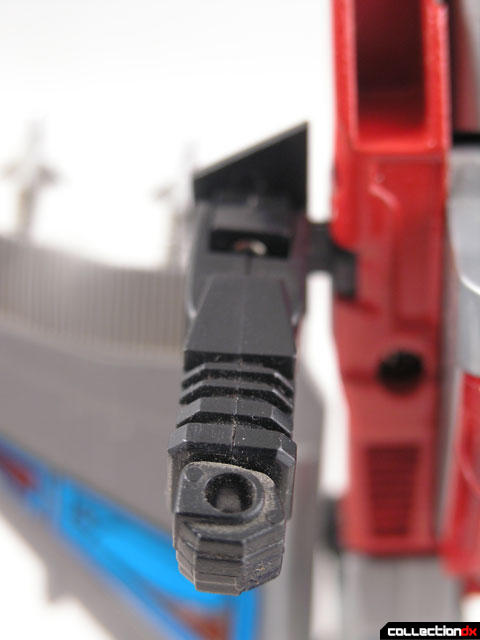 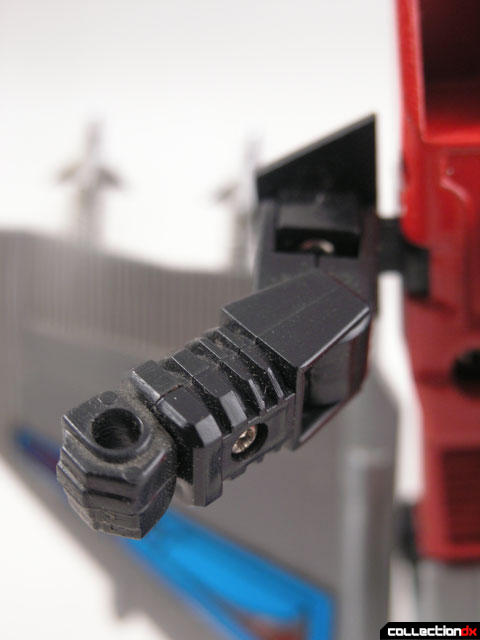 The feet have been redesigned as well, featuring larger, blockier feet. 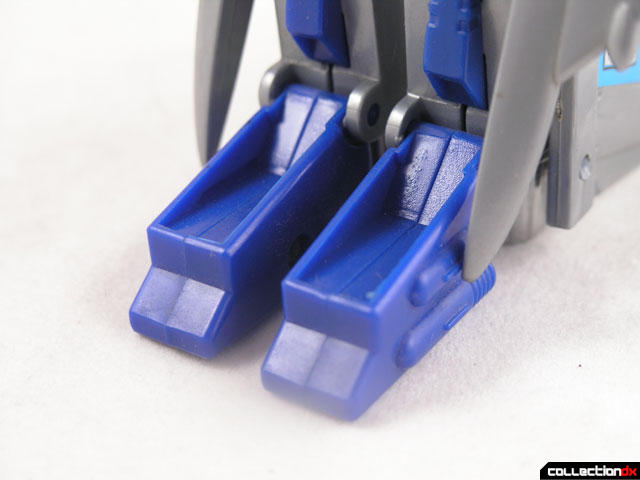 The head is also redesigned, now meant to look more like Jetfire than Starscream. 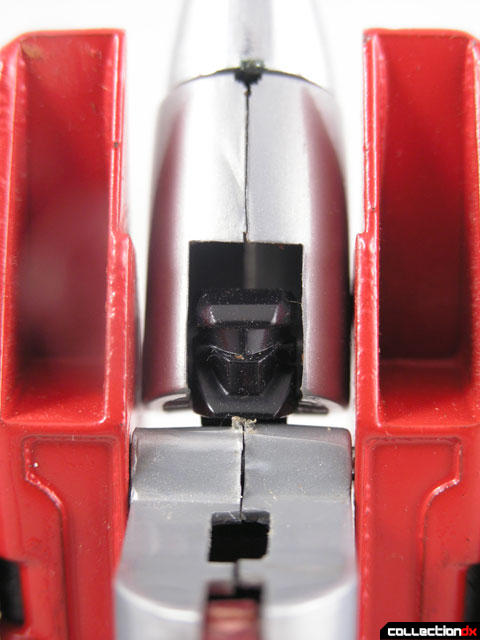 While a neat toy in its own right, It just didn’t fit in with my collection, so I decided to part with it. I brought it to the East Coast Summit, and had a cool $50 on it, but nobody was interested. I think at one point I dropped it back to $20 just to get what I paid for it. Still, no takers.

As is my usual post-Summit routine I took all the stuff from the Summit that did not sell and threw it up on ebay.

You know you have something special on ebay when as soon as you list it you begin to get private messages asking if you would end the listing and asking for how much. I think I got five of these messages within hours of listing the item. The price stayed relatively low, however, until the last day where it jumped up.

So it goes to show you a few things.

Value is often subjective based on who is looking at something. While neither myself, the Summit attendees, or the guy in the pop culture store saw much value in the item, but someone did, and got to fill a difficult hole in their collection.

Secondly, it goes to show that no matter how much we read, how much we learn or how much we see, there are still new things to learn and discover. This toy slipped through the hands of very experienced collectors until it caught the eye of one intrepid treasure hunter on ebay.

Third, it shows a part of the hobby that I think many of us like to think we don’t get caught up in. The thrill of making a quick buck off of an impulse buy is great and should not be ignored. It’s easy to get caught up in the excitement but the key is to not let it cloud why you collect these toys in the first place. Not every score will be like this one.

In the end, the obscurity and scarcity of this toy made it highly desirable by the few collectors who knew of its existence. It doesn’t hurt that this is a pretty neat toy as well.

8 comments posted
If I knew you were selling

If I knew you were selling off the leftovers from Summit, I would have e-mailed you sooner. There was stuff in there I wanted! O_o;

It looks so sci-fi with the redesigned wings, vertical stabilizers and cockpit. Like some naive "jet of the future" concept from the 70s.

"To start, the rubber nosecone has been replaced with a METAL TIP."

"In jet mode, the toy has several modifications from the original design. To start, the rubber nosecone has been replaced with a METAL TIP."

Ha! It's like Reverse Safety Measures. "What? A rubber nosecone? GET THAT MESS OUTA HERE. You get a metal tip on that thing NOW! How the heck are you supposed to have fun with the thing if you can't launch it through the drywall? GEEZE. It's like you people think kids are gona poke each other's eyes out or something!"

I'd like to see someone draw this (and those Dinobot remolds) as if they were Transformer characters.

LOL. I wouldn't have thought it was worth 10 bucks.