The semi-obscure Heavy Metal L-Gaim property continues to endure in popularity, due in large part to the unique mecha stylings of Mamoru Nagano. The L-Gaim toys remain the most well-realized creations of the cult designer. The Hi-Metal is arguably the best.

Bandai only released a handful of Hi-Metal branded toys, a couple of Valkyries and this guy (though the line has recently been revived to release small, nearly metal-less valks). I’m still not entirely sure what the Hi-Metal concept was about. Yes, these toys used metal, though not necessarily a uniquely “Hi” amount compared to other Chogokin. Interestingly, the package labels the toy as a “product of Popy.” So it’s metal and Popy. Why not Chogokin?

The bespoke packaging positions this piece as a high-end adult collector piece, similar to the High Complete Model series. The cardboard is the same luscious textured material Takatoku used. Paintings and illustrations dominate the box, with smaller photographs on the sides. 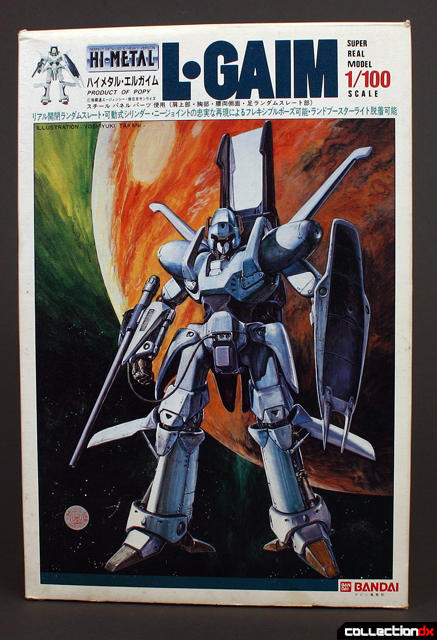 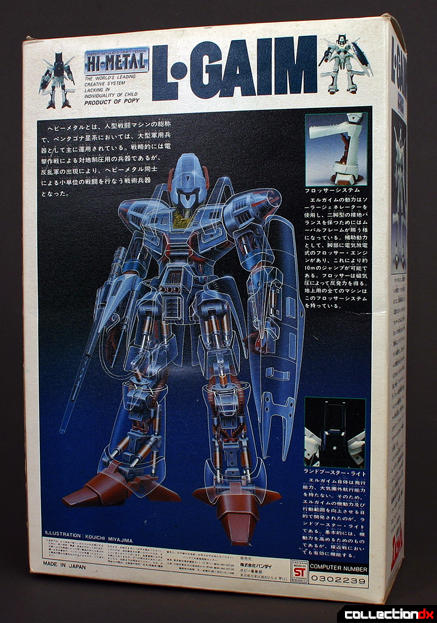 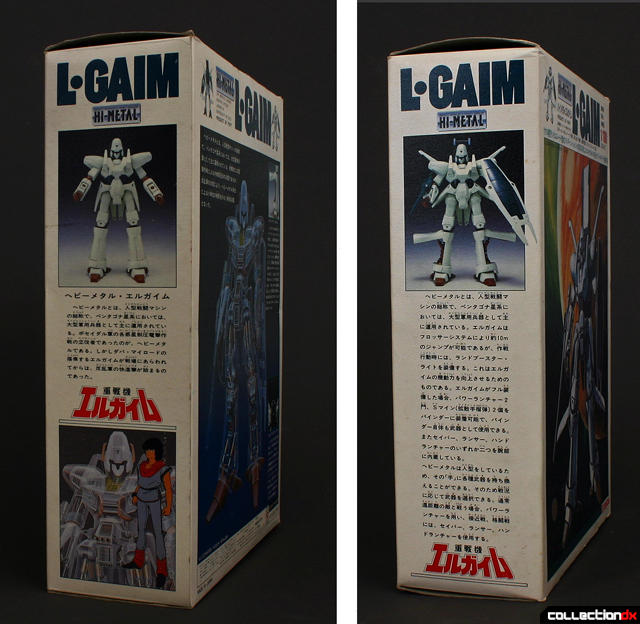 Inside, a large sytrofoam tray. Included are the base figure, a shield with associated accessories, backpack, guns, and hoses. The little cardboard tags are a nice touch. 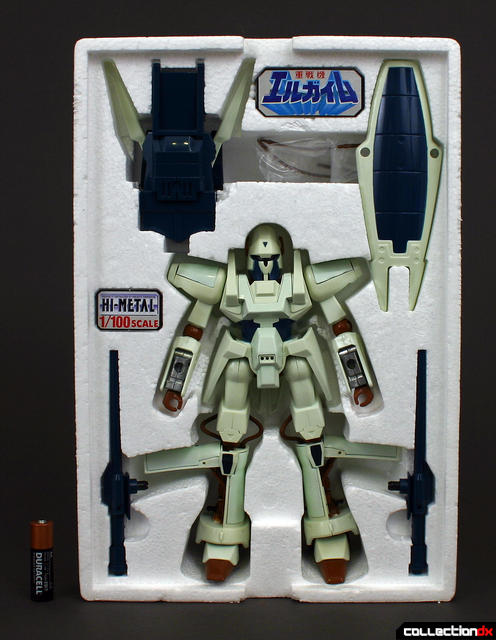 You’ll notice right away that there’s something funky going on with the coloration. This piece and it’s HCM brother are probably the two most yellowed (or possibly 'greened.' in this case) toys in Japanese history. Even minty specimens such as this, removed only rarely, are yellowed. The metal is relatively white, though.

I’m not too hung up on the discoloration though. The toy is so fantastic in every other regard. I’m curious to see if anyone has attempted to steep one of these in peroxide. I’ve used that technique with success on yellowed plastic before.

Out of the box, this thing oozes quality. 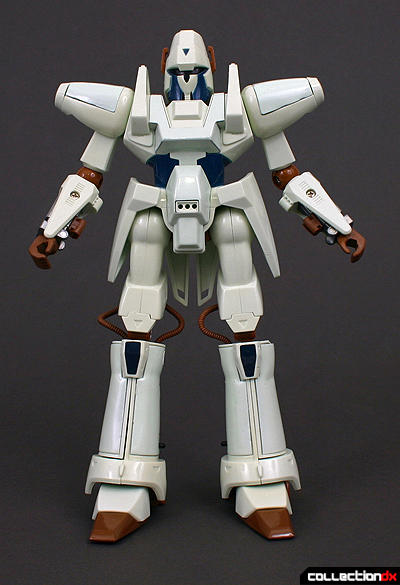 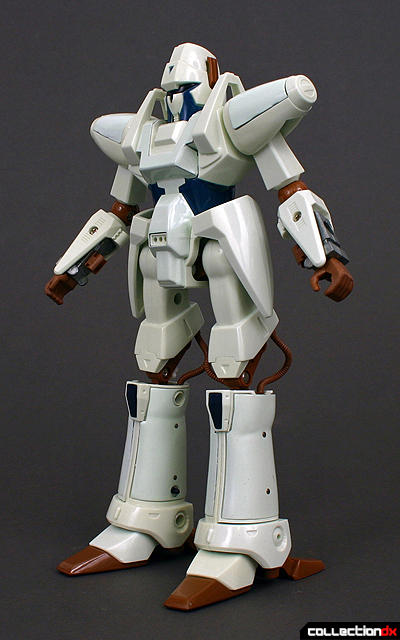 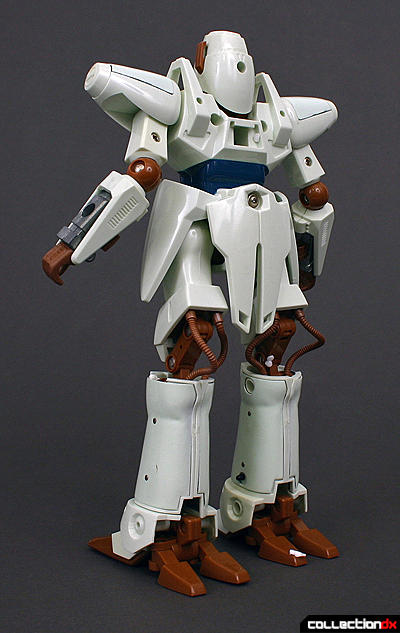 There is substantial heft. The feet and forearms are solid diecast. 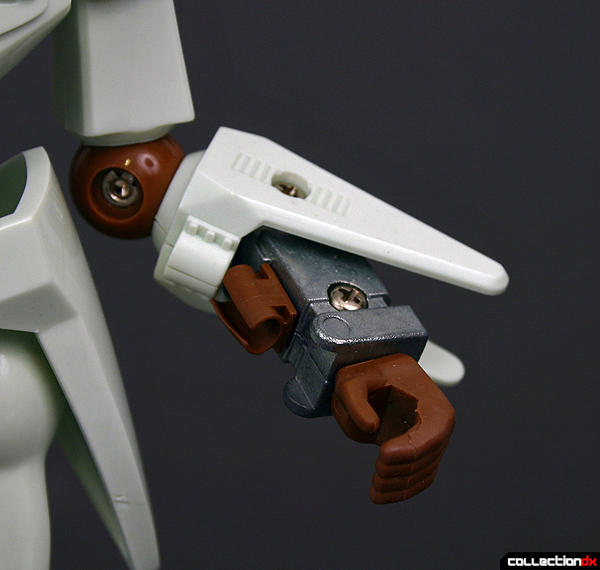 The rest of the metal content consists of thick plating, a detail I’ve never seen used elsewhere. My only gripe is that these plates don’t mate very closely with the surrounding materials. The shoulders in particular are gappy. 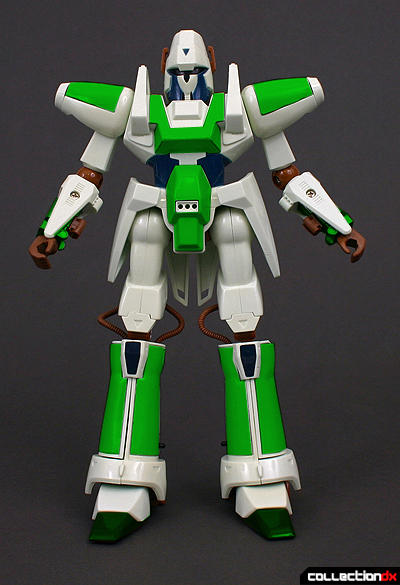 Articulation is well above par for the era. The knees, for instance, are double jointed. Unfortunately, they’re not terribly practical. They move in interesting positions, but don’t add a lot to static posing. 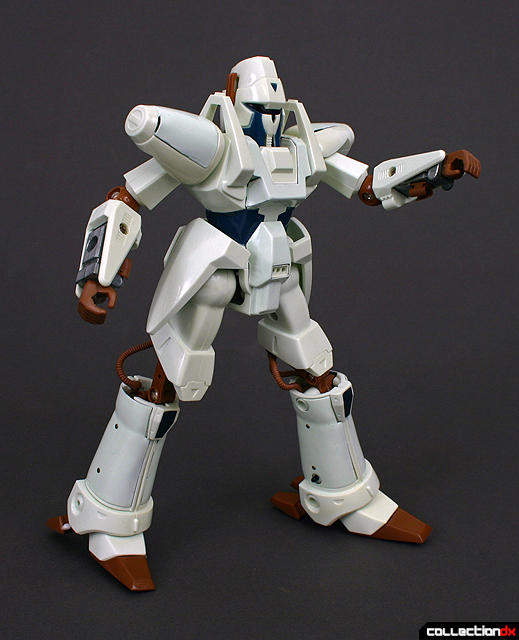 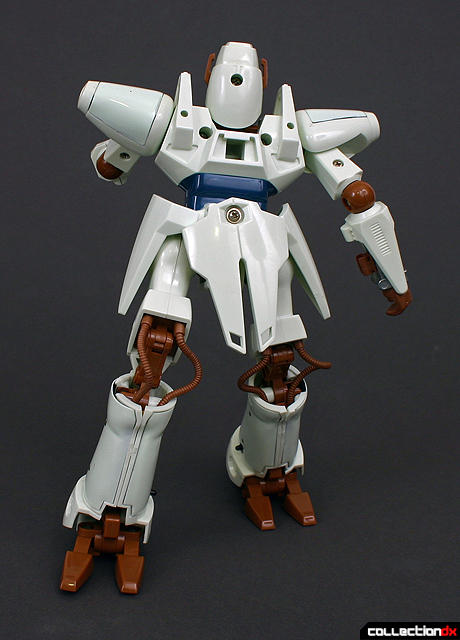 Also, I’m afraid to do much with them, as they are only held together with rivets. The elbows are rivets too. Once any of these joints loosen, that’s it. I’m not adventurous enough to attempt to re-tighten 25 year old rivets holding brittle plastic together. 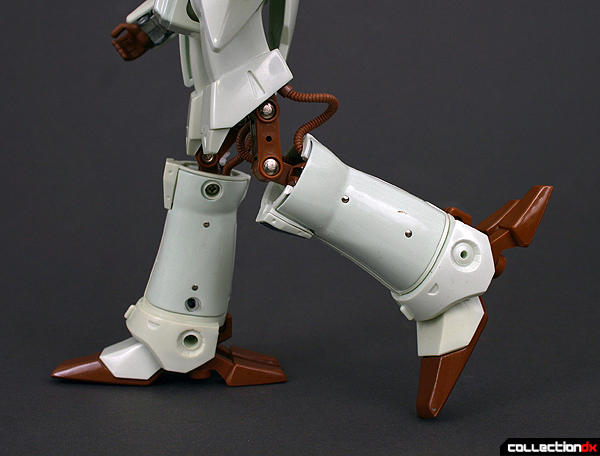 The feet are fantastic, with all kinds of movement. The firmness of these joints help immensely with posing. 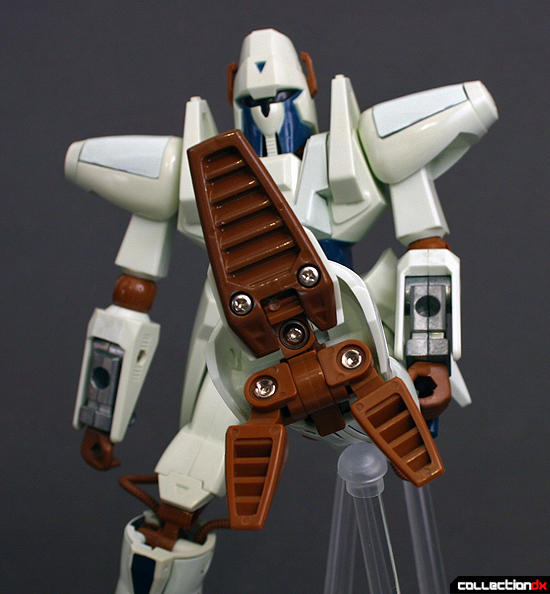 Spring-loaded leg panels open to reveal beautifully detailed compartments. The pistons fluidly tuck behind the panels. Bandai was genius to package these panels open. Doing so ensured that the springs remain strong. 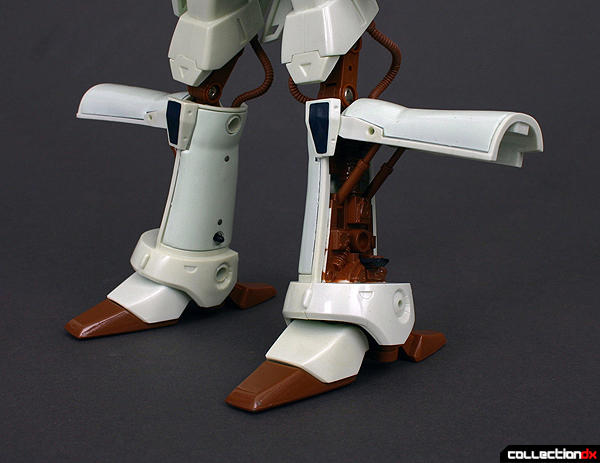 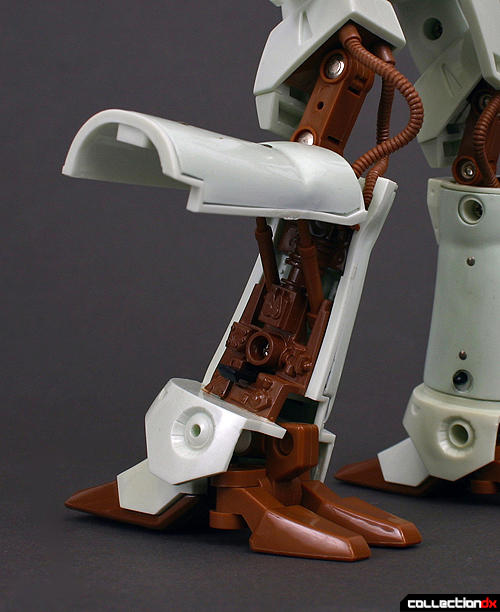 The figure really comes alive with its accessories. The backpack clips on firmly and precisely, as does the shield. The arm cannons are less successful. They are super loose in their sockets, and when you attach the cables to his waist, the tension in them spin the gun around in awkward positions. 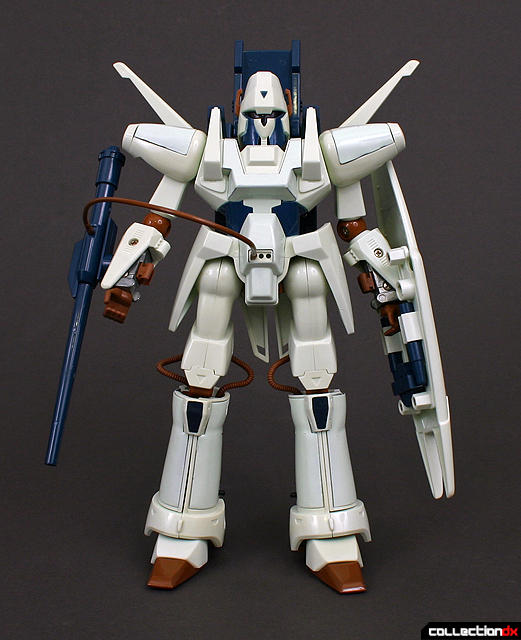 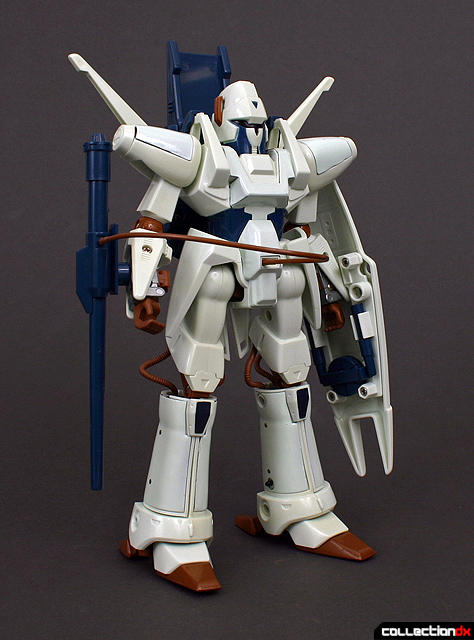 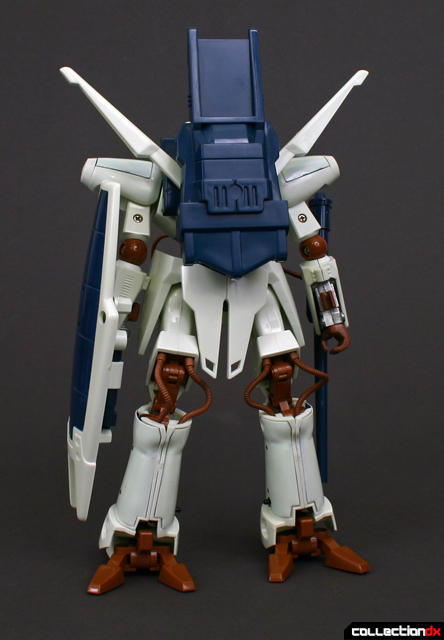 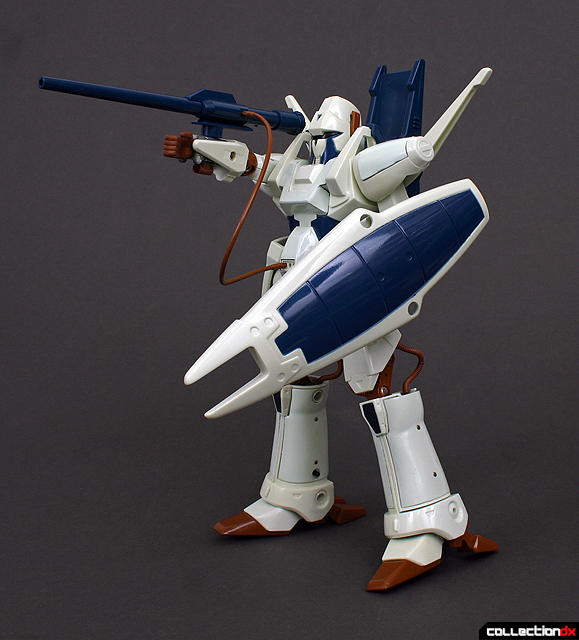 The shield stores a couple of missiles and canisters. 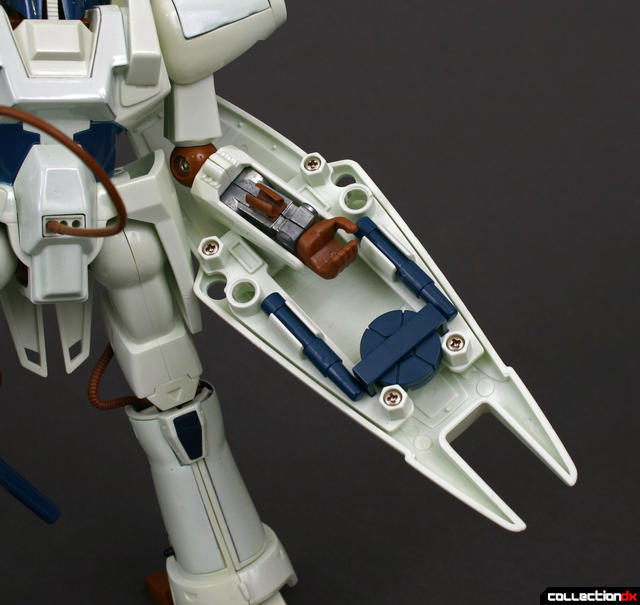 Canisters can be held, and the missiles fit onto the forearms. 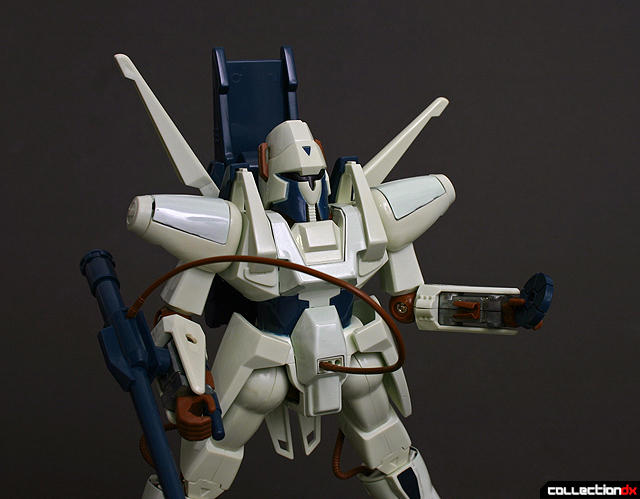 I was surprised to find that the fore-arm fittings are actually a thin rubber. A neat detail, but these only barely hold the missiles and will certainly degrade. I also have concerns about the rubber hoses at the knees. They’ve lasted this long, but are notoriously brittle.

Everything looks majestic. What a killer design. 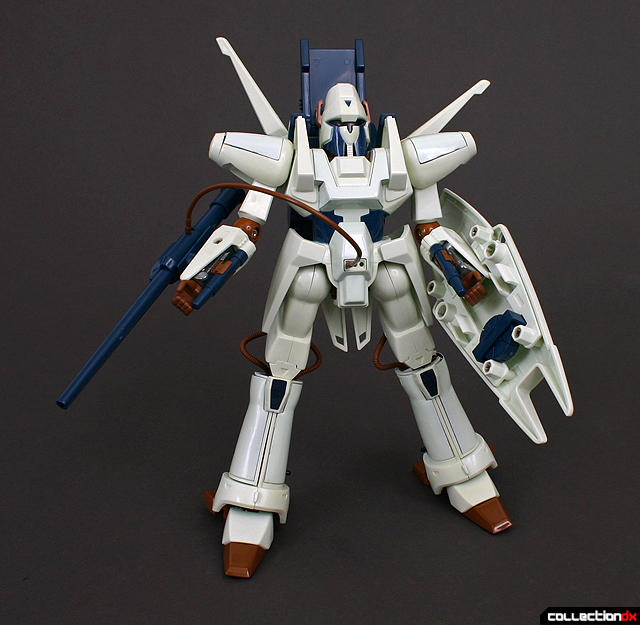 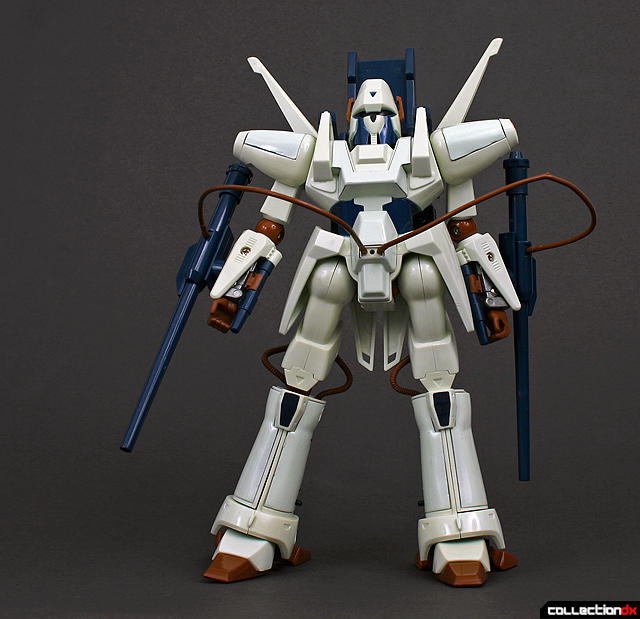 I don’t know why this piece isn’t more popular. It’s ambitious, beautifully realised, unique. Unfortunately, the mixed-media nature of the construction has made it vulnerable to degradation. I wish I could proudly display this thing, but it’s not that kind of a toy.

2 comments posted
I wished they incorporated

I wished they incorporated the spring system into the SOC SPEC version I reviewed years ago. Also this one seems to have more metal.

I'm happy that you did a review of this! The Hi-Metal L-Gaim is one of my favorite pieces; at one point I had three of them. It helps that these aren't particularly expensive or hard to find. The use of metal plating has always reminded me a lot of the DX Tetsujin 28.
The bits on the shield are actually two beam sabers and an S-mine