Modern toy manufacturers have all but abandoned the playset, but in the 80’s, no action figure line was complete without a Fortress, Base, Lair, or Castle. Star Wars and G.I. Joe were the undisputed kings of the playset. The figures themselves became accessories to the increasingly elaborate set-pieces. The apotheosis of the boom-era playset was the USS Flagg.

He-Man, Voltron, even outliers like my beloved Power-Lords, Mantech, and Robo-Force - all produced large fortress playsets. Unusually, the Transformers eschewed the playset. Sure, Fort Max and Metroplex are kind of city-type environments, but only just. The emphasis was still clearly on the figure, not the setting.

The Gobots, however, released at least three proper playsets. The Command Center was the Guardian mobile headquarters.

While Tonka mostly regurgitated Machine-Robo molds for the Go-Bots, it frequently designed unique pieces in-house. The Command Center is pure Tonka: a big, clumsy, goofy vehicle possessing little of the refined Bandai design ethos. The design is an obvious interpretation of the AT-AT. An inept but somehow charming interpretation.

The Command Center’s box is largish at 24” x 12” x 6”. The painting is typically Go-Bot: lush, handsome, but too damned literal. That painting exactly depicts the toy within, awkward details and all. Transformers knew when to take liberties with the box illustrations. The Tonka guys just painted the toy. 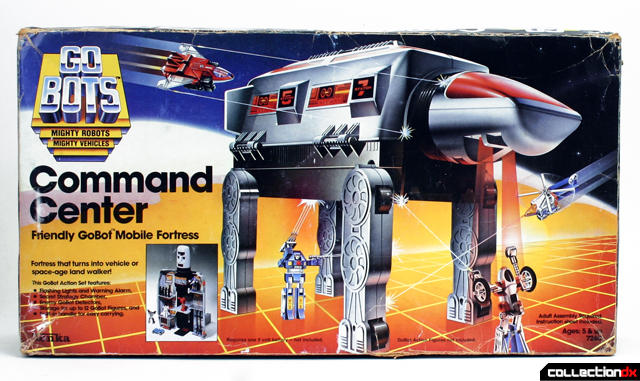 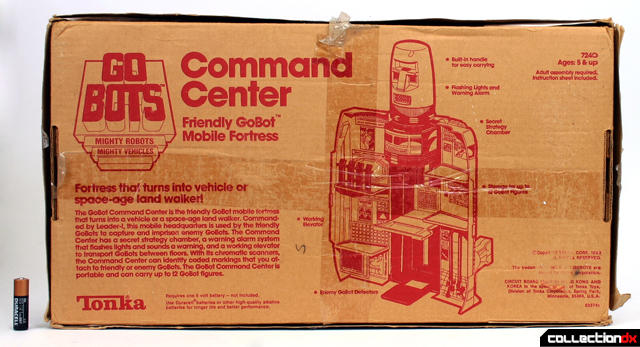 The Command Center works as a walker/vehicle mech, but isn’t terribly exciting. The proportions are strong and it feels sturdy and playable. You will notice a general blandness of sculpt and dependency upon decals which will characterize this piece (though, to be fair, many other sets of the era also). The rear of the box promises a handle which does not exist. 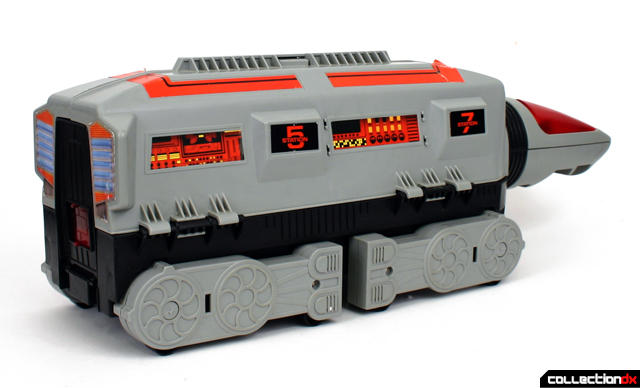 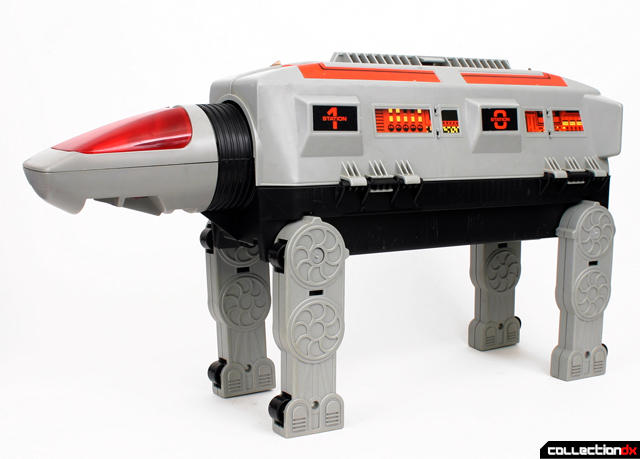 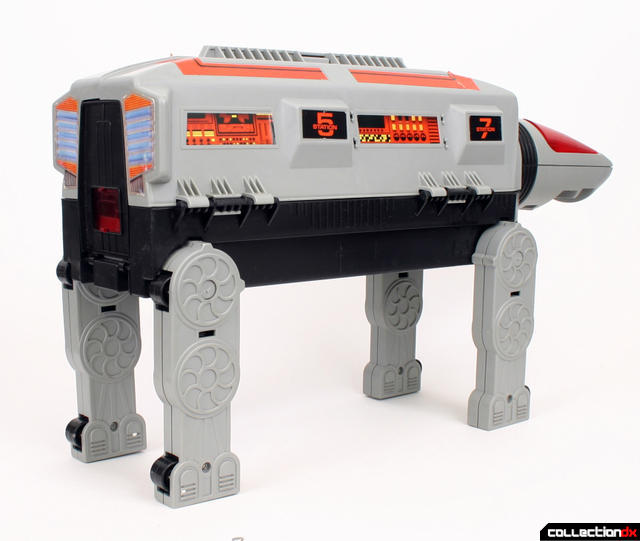 Transformation into the base is simple. You stand the thing up and open the bay doors, to reveal... platforms. 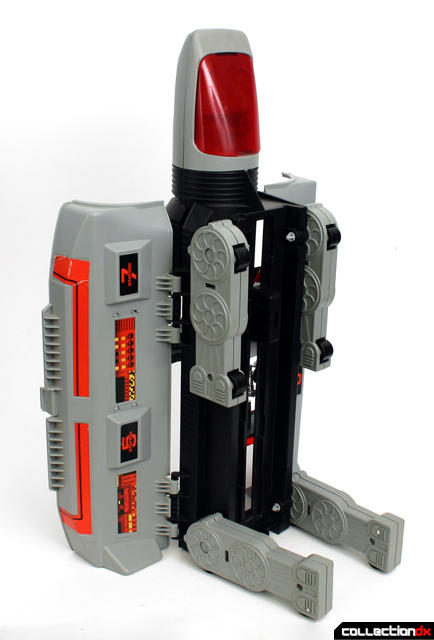 The command center is essentially a series of platforms, joined by a nifty elevator in the center. The elevator is manipulated by pinching a handle in the rear and moving up and down. 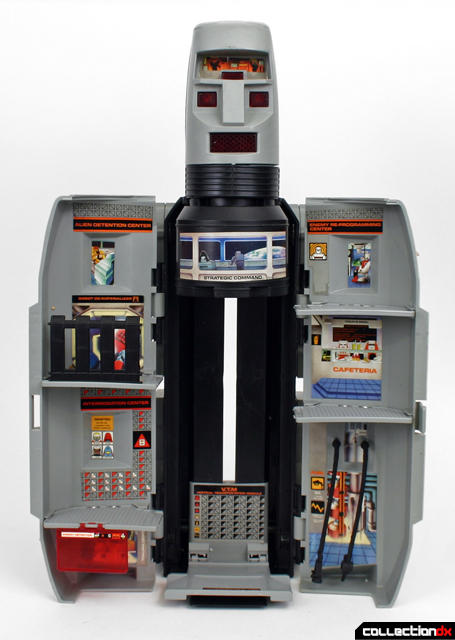 As intended, the piece really comes alive with, you know, actual Go-Bots. 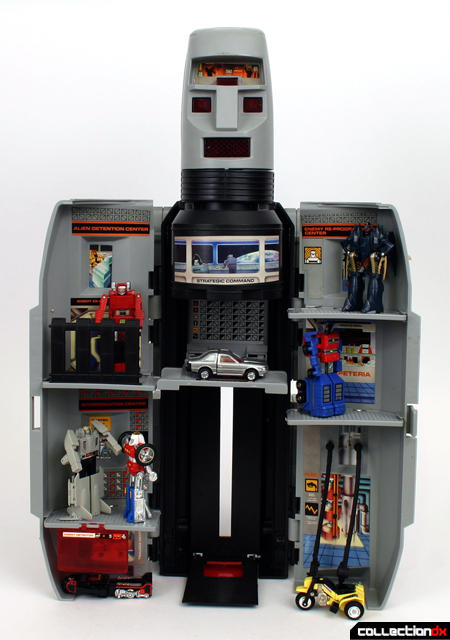 Most of the details are provided by decals. There are areas for fueling, de-programming, detention, teleportation, eating, etc. The fueling depot uses a couple of rubber hoses, usually missing from the set. One platform utilizes an enemy-detecting screen. 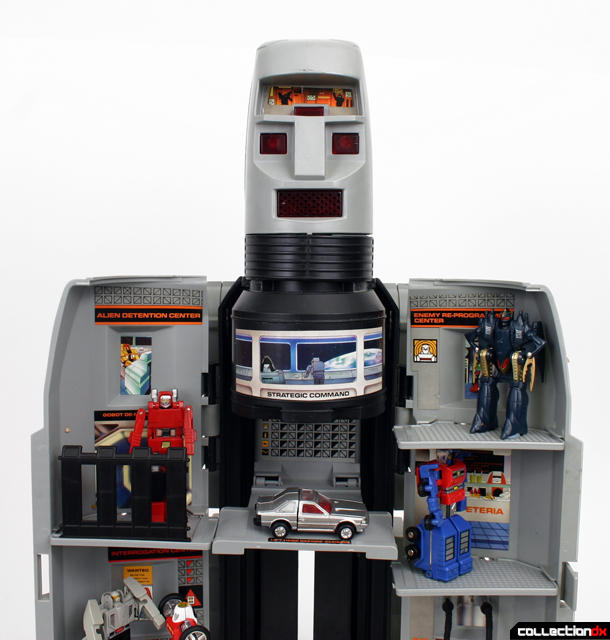 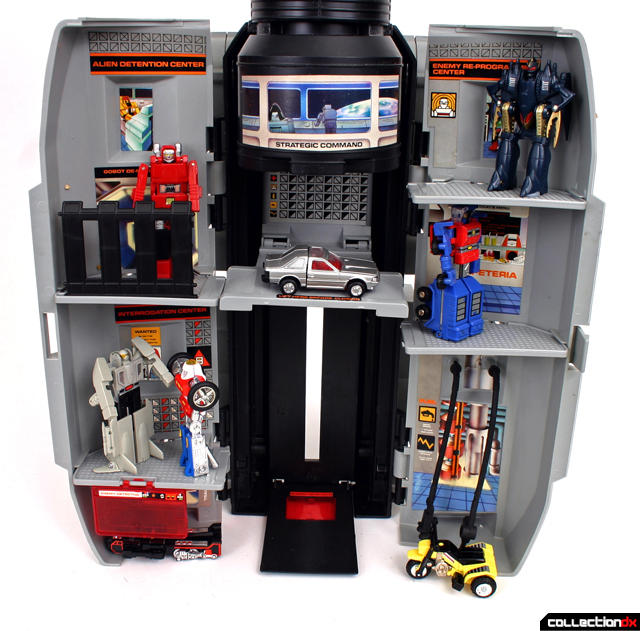 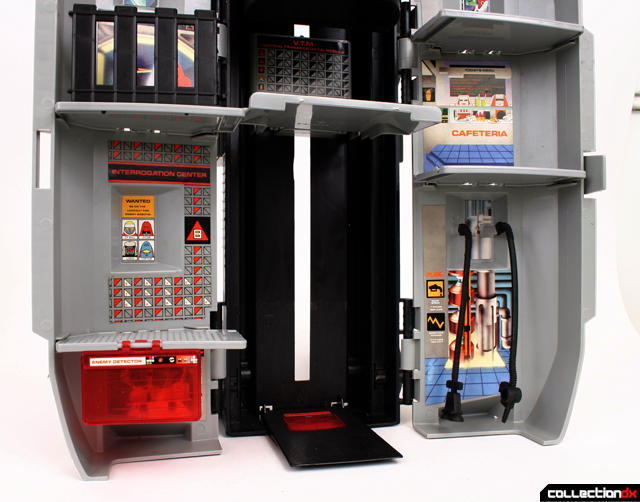 The ‘head’ unit at the top spins to reveal a hidden Strategy Chamber. 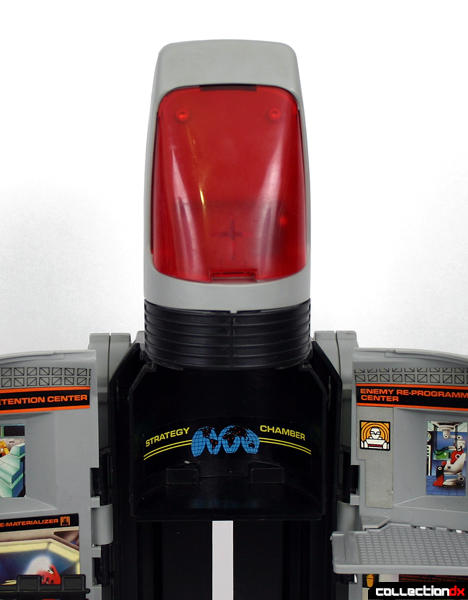 I couldn’t find a proper battery, but the eyes and mouth of the head apparently light up and make sounds.

The Command Center is ultimately best suited for Go-Bot diehards. It’s an essential addition to a Go-Bot collection, but it isn’t particularly interesting or desirable on its own merits. I like the broad styling, and it makes an attractive setting for Go-Bot play, but if you don’t like Go-Bots than you’re probably going to loathe this.

I've always liked the simplicity of this design, plus it's really show accurate, not sure if that makes it better or worse.

Asthetics aside, it really is a shame we don't see this level of play-sets anymore. Only thing i can recall is the Hellicarrier they brought out for Avengers.

The "not included" handle is the indent on the thing's "forehead", you stick your fingers in there to carry it around, much like on old "portable" TVs.