The Commandrons are a mostly forgotten line of transformable robot toys from the 80's manufactured by Tomy. For a short while they were also sold McDonalds restaurants for 99 cents each These versions included a short comic book from DC Comics. They were also sold in Canada under the name "Super Alternators."

I still have hazy memories of a road trip my family took all the way from Massachusetts down to South Carolina where along the way I picked up several oddball Transformer-like toys. Turns out the best way to appease a small child on an eight hour car ride is to buy him a bunch of little robots. I owned three out of the four Commandrons available but sadly misplaced them over the years. Recently I purchased a huge lot of Gobots that came with a lone Commandron figure and it is one that I owned as a kid.

I present to you Commander Magna, leader of the Commandrons. 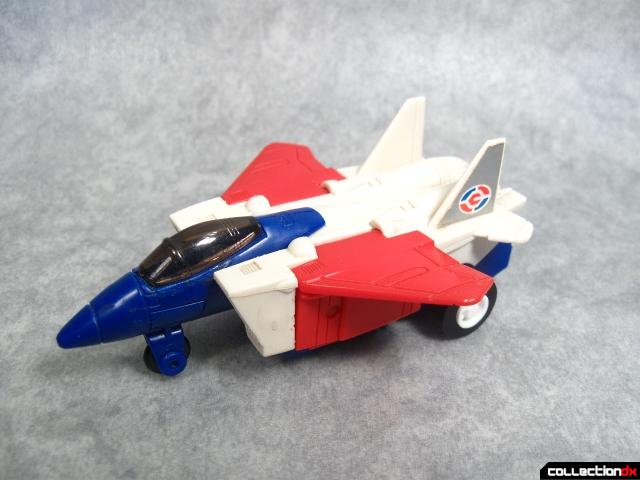 Commander Magna is the team's resident airplane guy and is a rotund representation of the famous F-15 Eagle. He's about four inches long in jet mode and is a very patriotic little plane with his red, white, and blue colors. 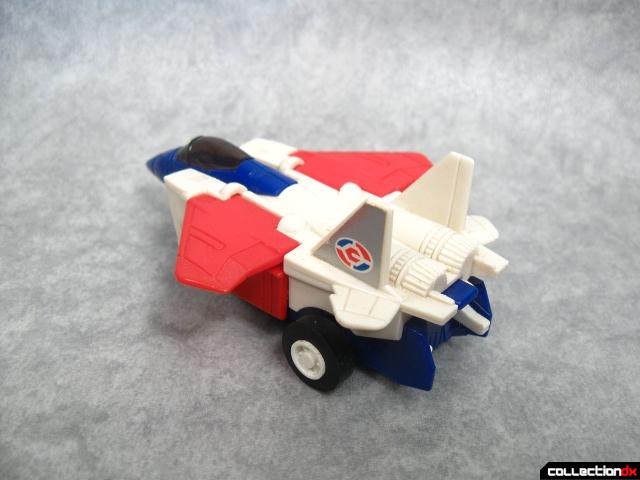 All of the Commandrons have a pullback motor that lets them race along the ground in vehicle mode. 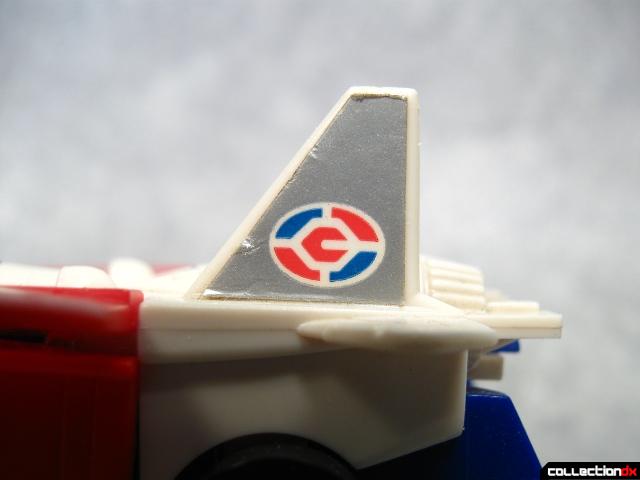 While the toy has no paint work, it does have some crisp stickers like the Commandron logo on each tail fin. 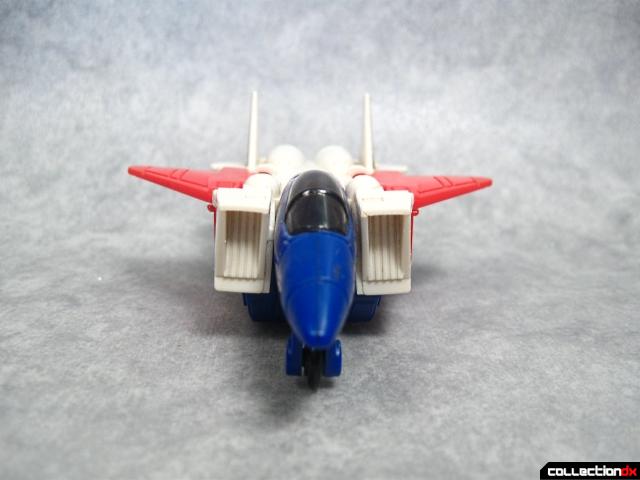 I will give Tomy props for packing as many authentic F-15 details as they could on such a "super deformed" style toy. 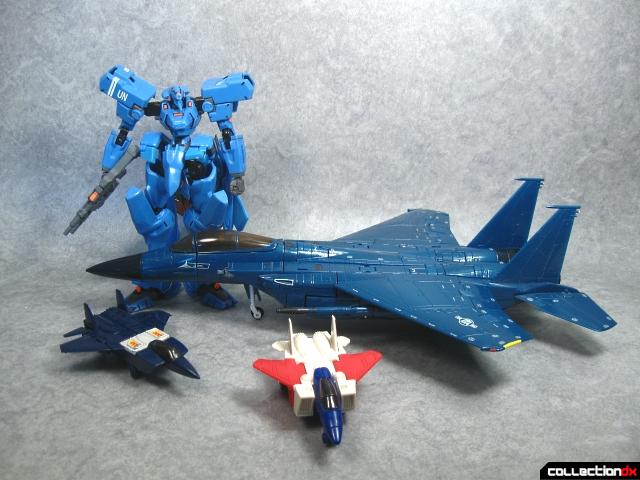 Commander Magna looks right at home next to my other F-15 Eagle based robots. 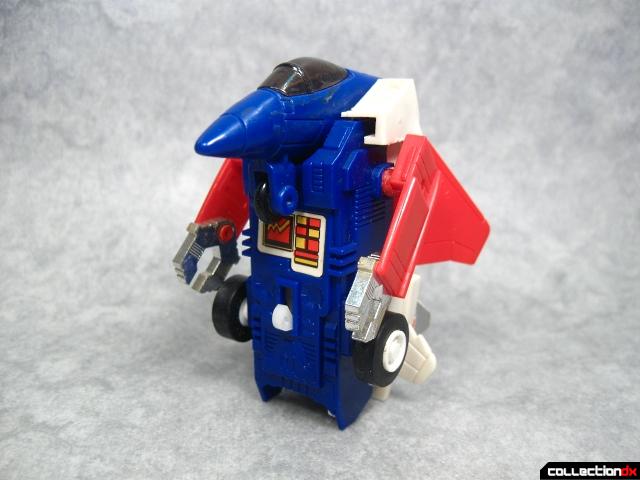 Transforming Commander Magna to his robot made is incredibly simple with the majority of the conversion consisting of standing the jet on end. From there you flip the nosecone down, pull out his arms, and flip out his chromed clamp claws. 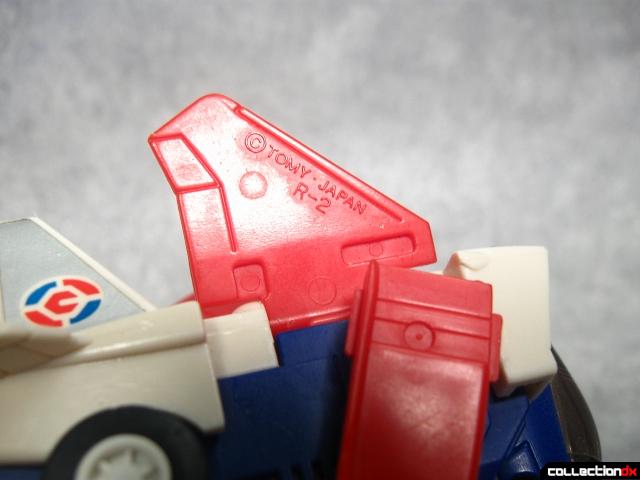 Under his right wing is copyright markings showing that this is indeed a legitimate Tomy toy. 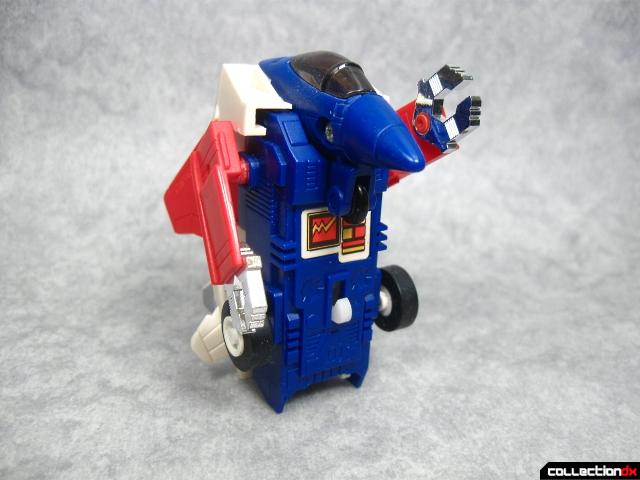 Articulation is pretty minimal on this figure but that's to be expected for a toy of this vintage. Commander Magna's arms can rotate at the shoulders and even splay out a bit. However, Commander Magna has a way of striding into battle despite his lack of visible legs.

In robot mode the small white switch located in Commander Magna's belly is weighed down by gravity which enables the pullback motor to power his walking gimmick. All of the Commandrons have this feature and it gives these guys a lot of charm. Due to the age of the mechanism, a Commandron may need a little prodding along the way. 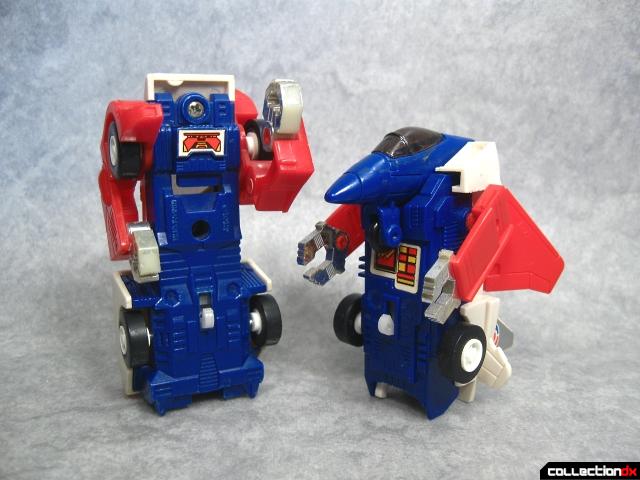 Here is the Commander along side one of his subordinates, Motron. I find it fascinating that the robot without a face was designated as the leader. If you think about it though, what could garner more respect from ones troops than having a head that is also the business end of a high powered fighter jet? 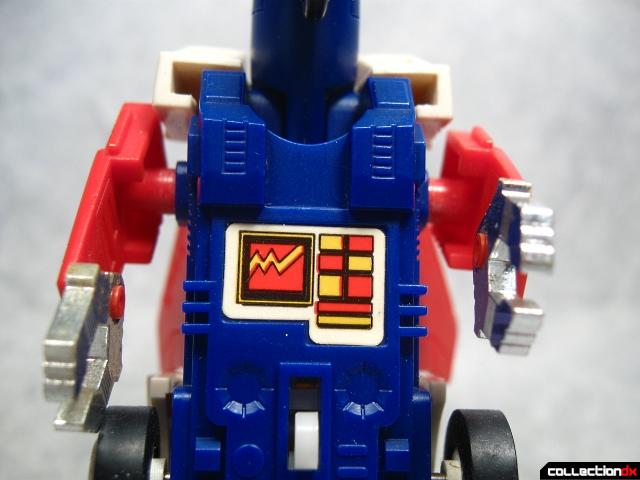 All of the Commandrons have a sticker that is made visible in their robot modes. For Commander Magna it is a small spread of 80's technology that is unlike anything seen on planet Havon. 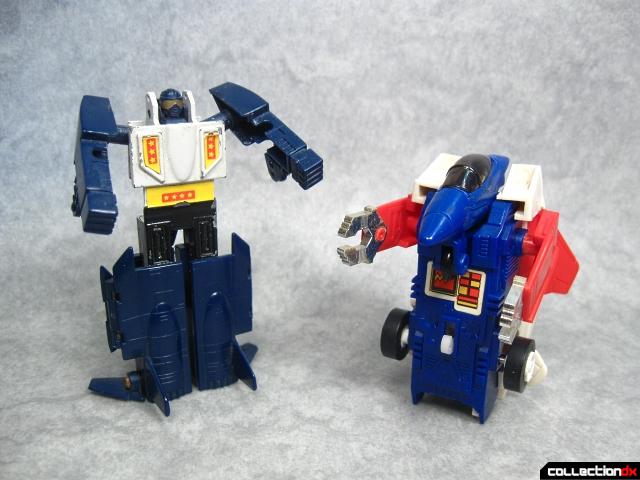 Here's two losers... I mean leaders from the transforming robot craze of the 80's. Both of these ro-men are universally respected high-ranking officers in the fight against evil. 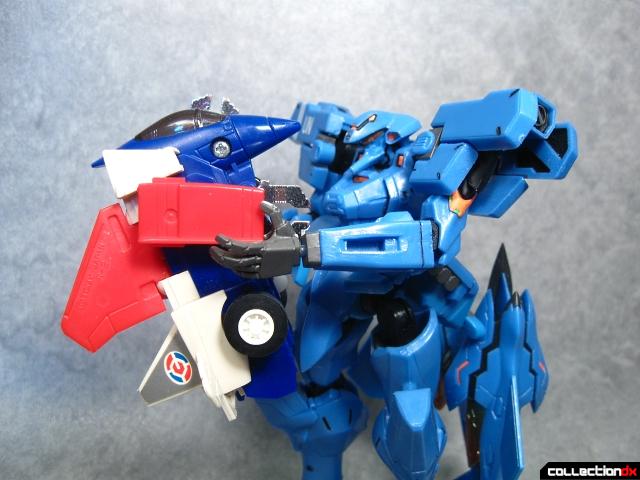 "Ara-ara~ You are such a cute little guy!"

"Put me down! I am Commander Magna, leader of the Commandrons!" 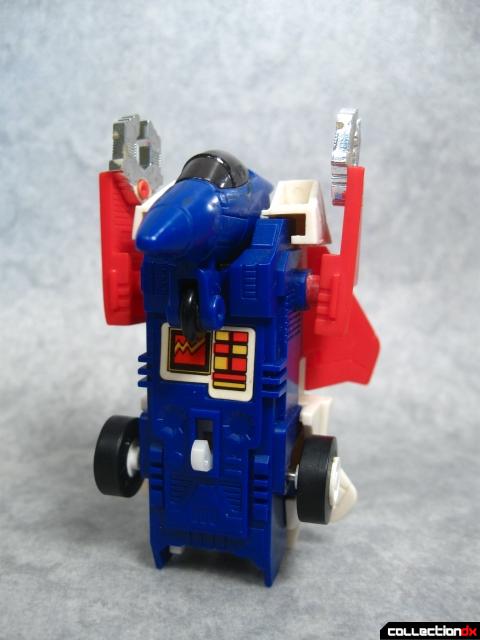 "I swear robots these days don't have any respect for their superiors!"

The Commandrons and Commander Magna are another curiosity in the world of transforming robot toys. Much like Moto Bots, these figures were everywhere back in the day and can usually be found on the aftermarket at reasonable prices. The fact that these were sold at McDonalds is a neat bit of trivia and speaks to the huge impact things like Transformers had on the toy market of the 80's with companies scrambling to put their products into all walks of life. If you try to acquire one, try to make sure the walking mechanism still works as it is half the fun with these toys. Overall I think the Commandrons have a lot of charm and are a worthy addition to any collection of 80's robot toys.

The one in robot mode and the big blue one.

One is the F-15E Strike Eagle from Muv-Luv Alternative

The other is Masterpiece Thundercracker (TakaraTomy version)

He's got the shimmy sham!

Somehow these toys were always found on road trips…..

Once again, this website gives a name to some random old toys I've got. Never knew what this one was! I know I had some others in a similar style, so I assume they were from the same series. I liked these little guys.