The Convertors line is an interesting footnote in robot toy history. Produced by Select, it was a collection of mostly small diecast and plastic transforming robots that were cobbled together from various sources. Some of the figures came from more recognizable properties such as Macross and Dorvack (via the recently deceased Takatoku Toys) while others came from more humble sources like the company Mark and their humble off-brand robots.

The Robo Car line by Mark is a great example of classic 80's robot toys. These roughly Gobot sized figures all share the same simple transformation and thanks to their copious amounts of diecast metal, stand the test of time as fun, durable toys. Select would later use the Robo Car toys as Convertors Mini Bots, which is a not so subtle tie to the Transformers sub line of the same name.

In my recent quest for Gobots, I dabbled a bit in Convertors and found them to be pretty terrific toys. 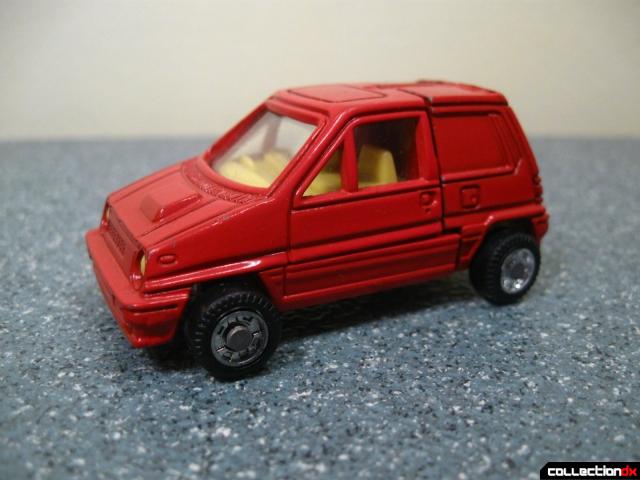 The simply named City is appropriately a Honda City Turbo in vehicle mode. While it may look like a fairly large van, the Honda City Turbo is in fact a sub-compact car made for tooling around the small streets of Japan. 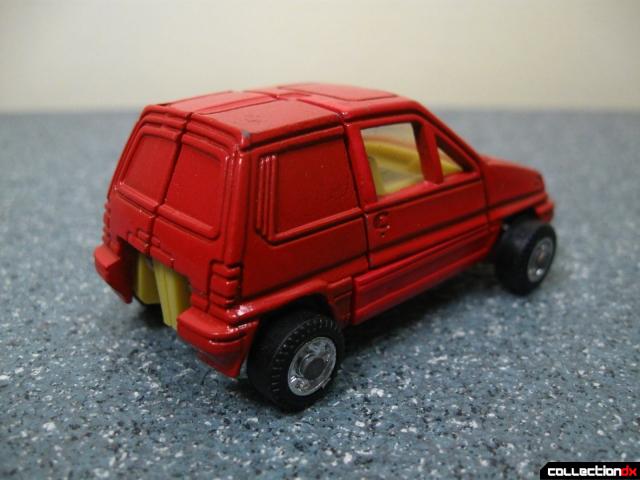 City is about two and a half inches long in this mode and can roll around on four rubber tires. His red exterior is made entirely out of diecast metal, which gives the toy a good amount of heft. 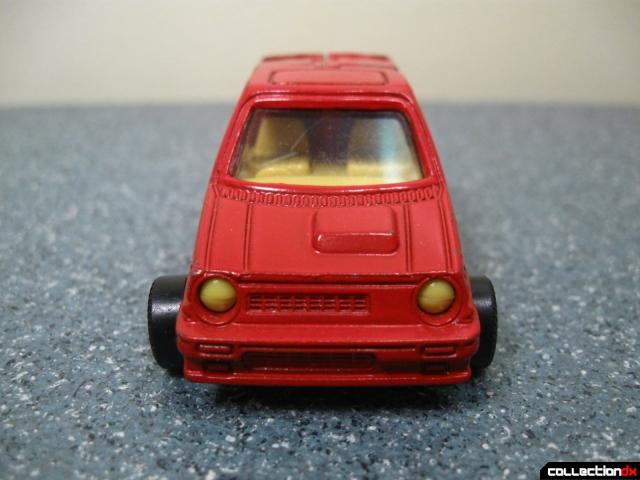 I really like the attention to detail shown here with the clear windshield and a visible interior. You can tell this is a Japanese toy because of how the steering wheel is on the right side of the car rather than the left. 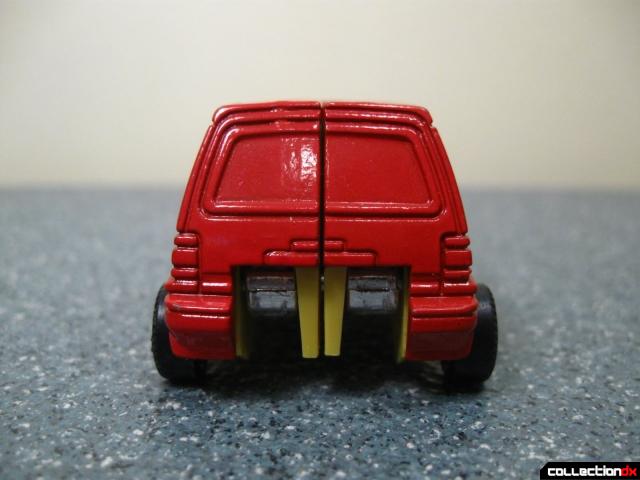 The only thing that really betrays City as a transforming toy are the obvious joints in the rear. Other than that, he's a fairly convincing diecast car. 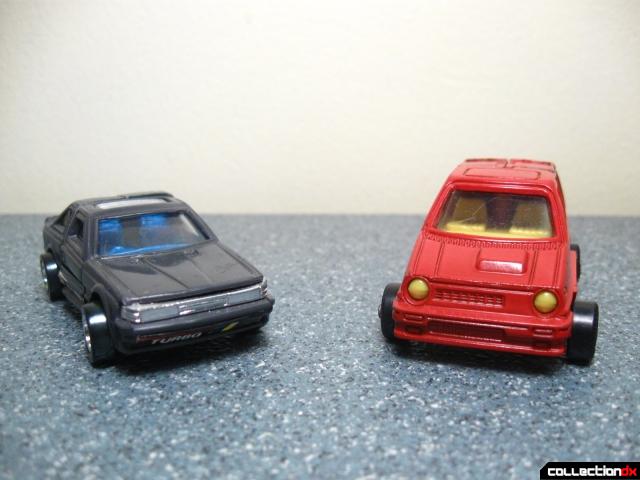 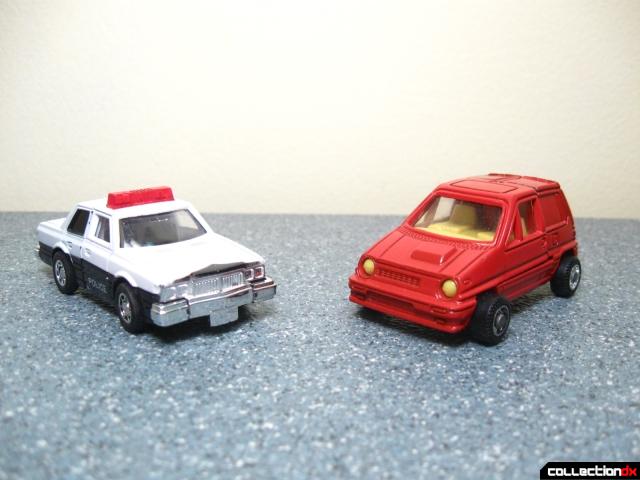 He could even pass for a good Gobot. 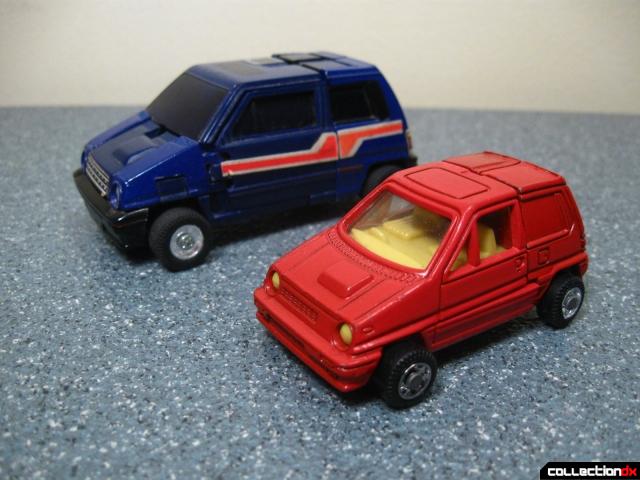 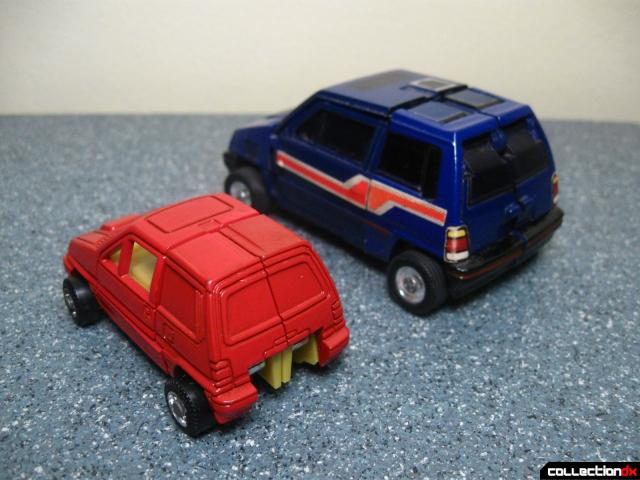 Some Transformers fans may recognize City's vehicle mode as being the same as G1 Skids. While Skids is a much more ambitiously designed figure, he is a good example the weaknesses of old Transformers. A loose Skids can have a lot of things broken on him but a second hand City will still be just as solid as the day it was taken off the card. 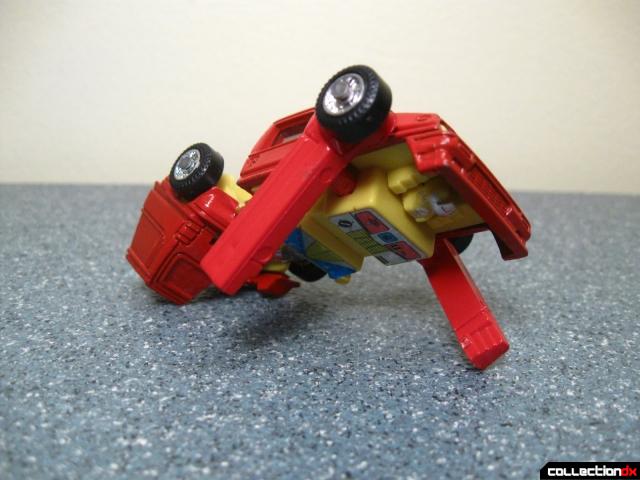 Just pull out the arms from the sides and flip out the rear of the car to make City convert from a mighty vehicle into a mighty Convertor. 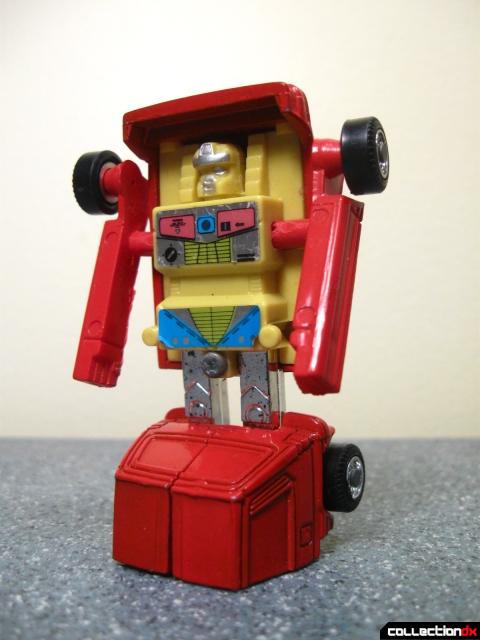 In robot mode, City is quite a charming little guy with a chunky body that would have instantly made him "the fat guy" if there ever was a Convertors TV show. 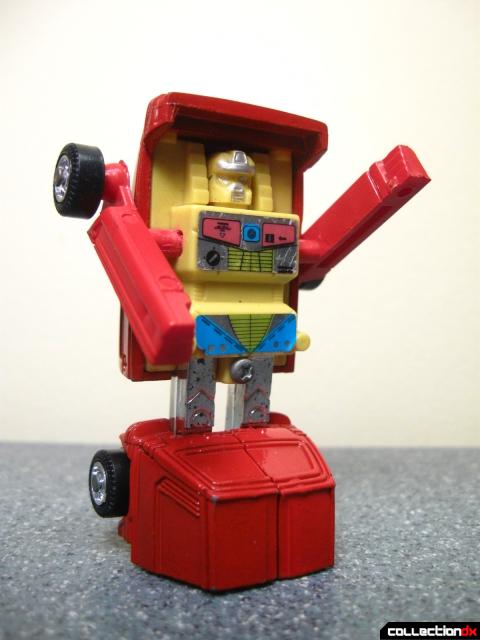 Articulation is limited to his arms but he still makes for an expressive robot. 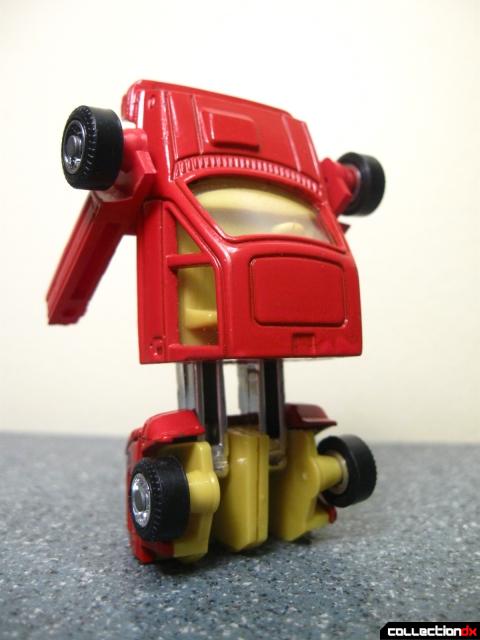 Because of his simple transformation, much of the car mode remains untouched on his back. 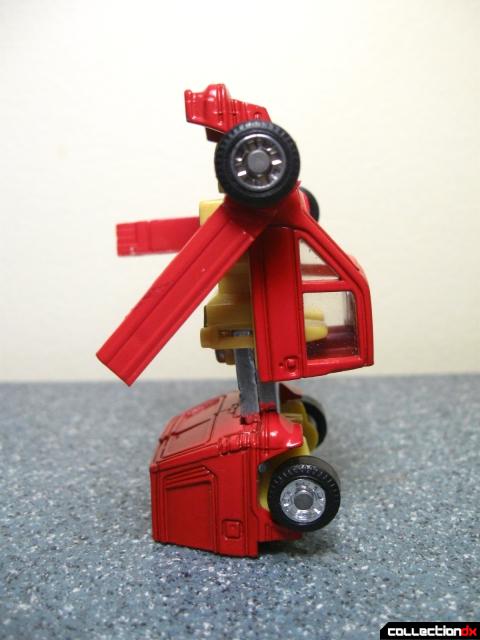 While aesthetically I have no issue with this, the fact is all that diecast makes him back heavy. You can tell the designers tried to compensate for this because his default stance is bent slightly forward at the knees. 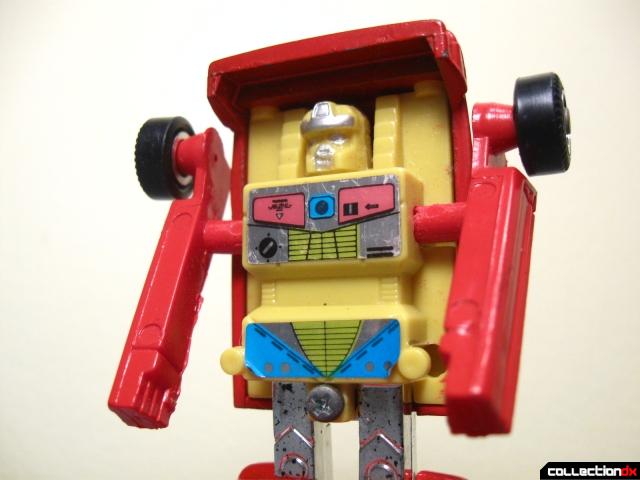 Most of his robot mode detailing is accomplished through stickers with one for his chest and another for his waist. The chest in particular has some cool 80's Real Robot style details like tiny faux text and that ubiquitous "circle slash" vernier as seen on the mecha from Macross. 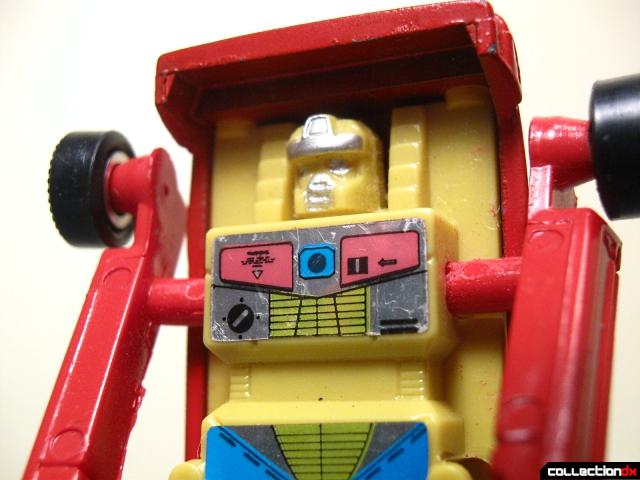 His head kind of reminds me of the Starzinger character, Don Haka, with is wide helmet and mouth covering face mask. One complaint I do have is the silver face paint is a little messy and a few more colors on his noggin might have made the head pop a bit more from the yellow plastic. 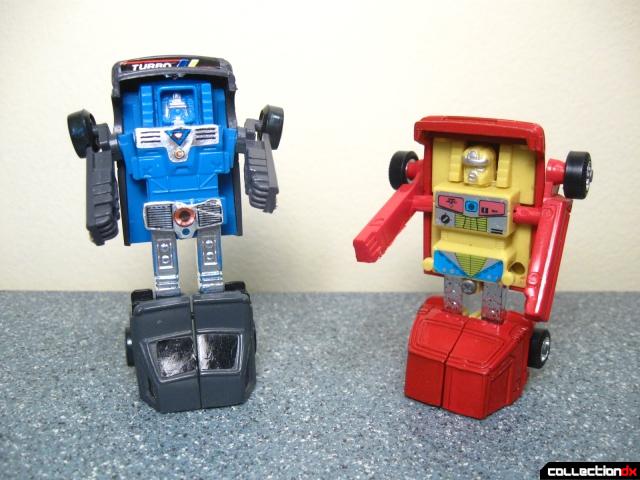 Due to the compactness of his vehicle mode, City is a stout little robot. Here he is alongside Turbo. 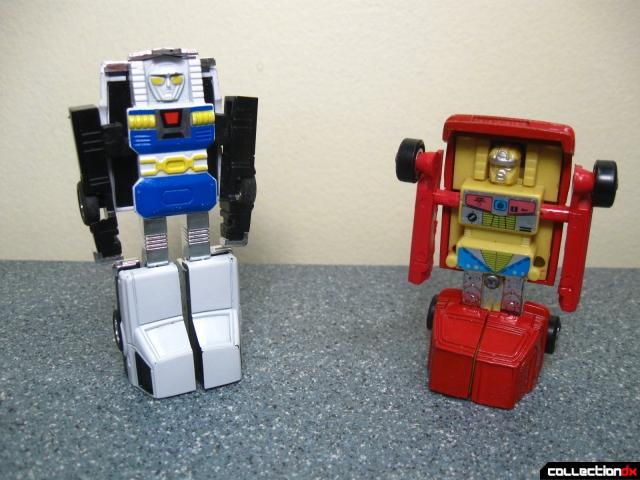 And again if you didn't know any better, City looks like any old Gobot. He is certainly built like one. 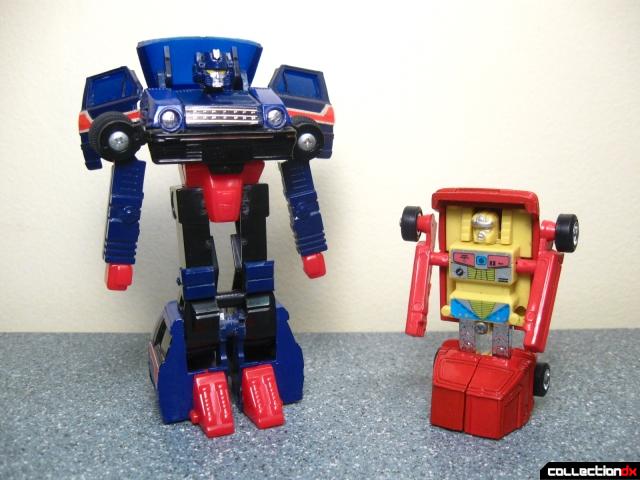 My old Skids is a little worse for wear but next to Turbo he's a pretty good demonstration of two schools of thought regarding Japanese robot toys. Skids is more elaborate and eye catching but not as durable while City is more basic and unassuming but is a tough child's plaything. 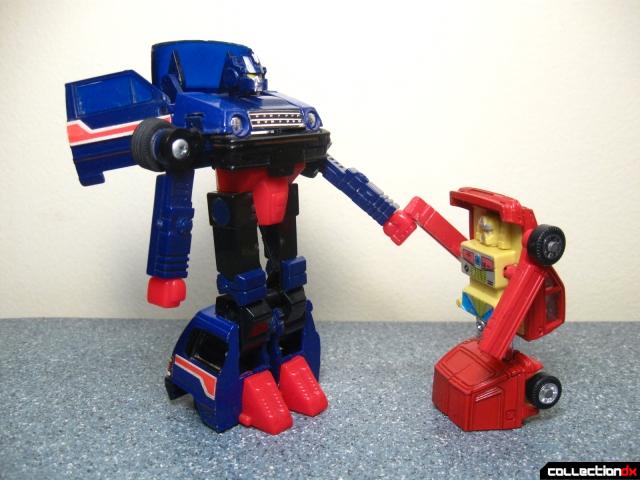 The Convertors Mini Bot City is a great toy who can be had for around ten dollars on the aftermarket. Even with all the expensive Japanese toys in my life I think there is still room in my heart for some good old fashioned robot toys so stay tuned for more Convertors reviews!

I love convertors. I have the Japanese version of this coming soon, but it's the same toy aside from the packaging. Great review.