Voltron II or Gladiator was meant to be the second TV series to go along with Voltron I (Dairugger XV) and Voltron III (Golion). For some reason, the show never aired, but Matchbox licensed the toys and put them out anyway. 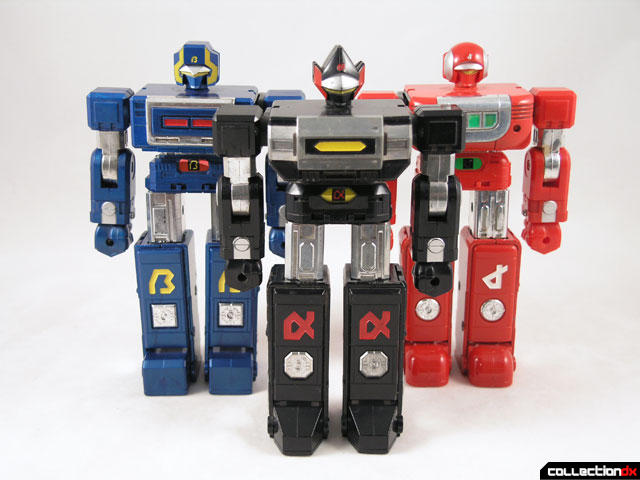 Each figure featured a sword and firing fists. The six modes are:

The Albegas Denjinbox actually comes in two versions – The first version box is horizontal and has the green, grid-like background artwork and the Popy logo. The second version is vertical a rainbow strip at the top and the Bandai logo. Popy was absorbed into Bandai during this toy’s production run. The toy originally retailed for 4,500 yen. 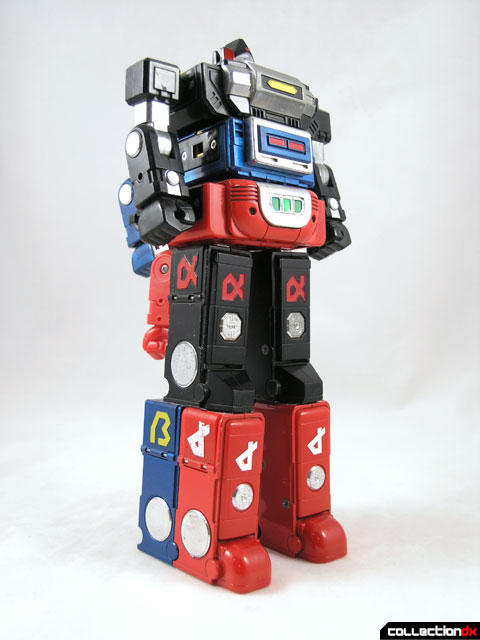 In 1984, when World Events Productions licensed Albegas as Voltron II, Matchbox imported the Denjinbox set for release in America. To conform to safety standards, Matchbox removed the swords and the firing fists from the release. They also split the box set up into individual robots.

At the time, the Gladiator Robot was a pretty ingenious thing. Each robot came apart and could recombine in endless combinations. Because we never saw the show, we really had no idea what was the “right” combination. I always thought the red robot was supposed to go on top as a kid. 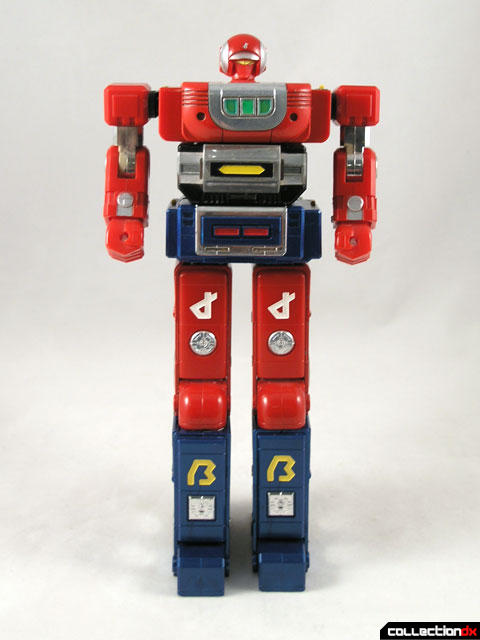 Each robot is constructed basically the same. The legs attach at the waist via a fragile connection point. The bottom of the legs are solid metal, with a hinged foot and knee. Doors on the side open and act as a lock to hold the legs in place when they are compressed. The arms are jointed at the elbow, but have a small bump in them that prevents them from bending backwards. A yellow button on the shoulders releases the arms so that they can swing backwards for the combination. The shoulders slide out from the metal chest area and a grey hinge allows you to compress the torso into the chest, and then the shoulders push back in to lock it all in place. 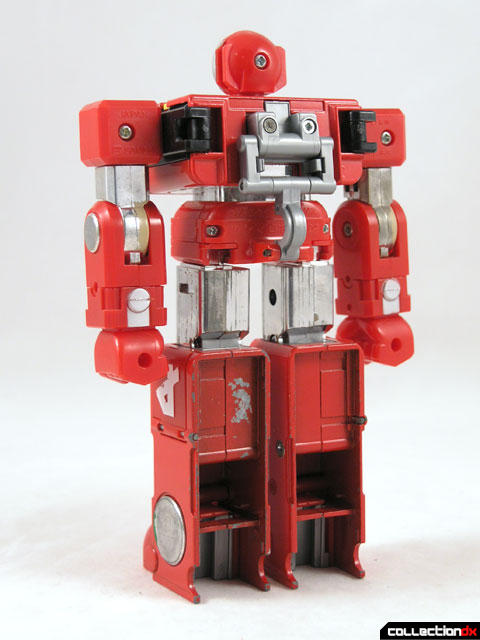 As a kid, I remember getting one of the three Gladiator robots – I think it was the blue one, but my memory is hazy. I remember the toy practically disintegrating after a short period of play. As cool as the concept was, these toys were really fragile. The connection joints where the legs attach to the body are pretty flimsy on their own, but add in Popy’s trademark fragile blue plastic, and you have a recipe for disaster. To this day, finding an unbroken set is a rarity. Other common problems were fists breaking off (they were just glued in), and slouching. Over time the middle plastic on the robots cannot support the heavy weight of the metal chest, and the robots “slouch”. 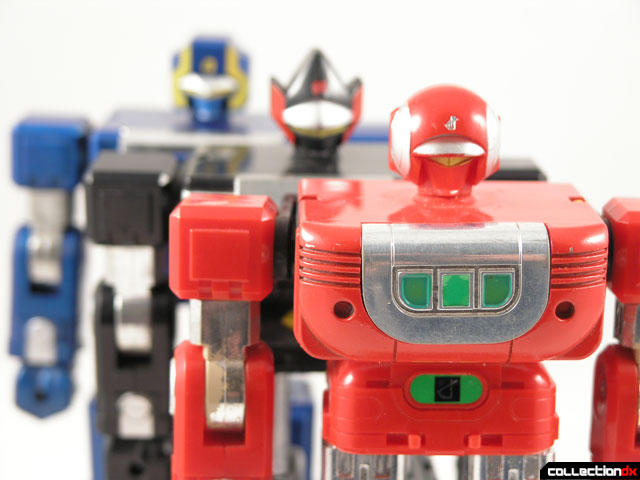 I have always had a soft spot for this toy, largely because as a kid I never had all three robots, and was never able to see the 3 robot combination. As an adult collector, I love the looks of this toy, and its endless play value. It really is a shame that it is so fragile. 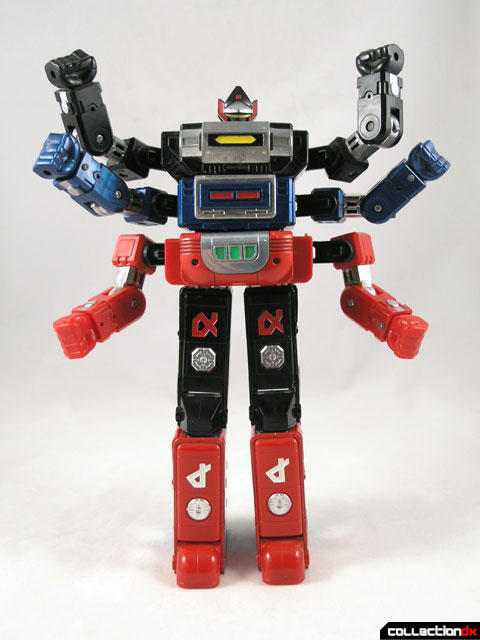 The art on the Matchbox package shows the Gladiator with his hands out, but the Albegas robot always had only one set of hands visible at a time. 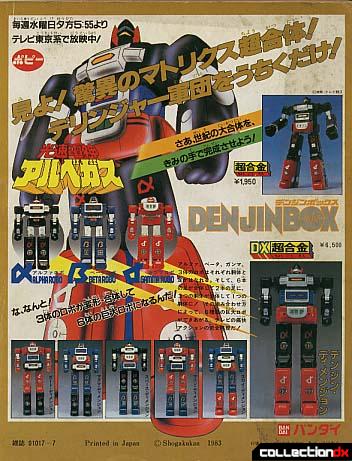 In December 1984, all I wanted for Christmas was Voltron. Finding one that Christmas for a decent price proved to be difficult. I called around various toy stores and they either did not have Voltron in stock(sold out) or it was $75.99 which my Mother absolutely refused to pay for one toy. I called Meijers of all places and not only did they have Voltron in stock but he was only $15.99!!! My Mother went to Meijers and bought it immediately fearing it would be gone. I was ecstatic!!!! On Christmas morning needless to say I was very confused when I opened that present. The box said Voltron all over it but the blue robot in the box I had never seen before in my entire life. It said Voltron II on it and there was a small screen grab from the Albegas cartoon(of course I didn't know that back then) on the side of the box and it said something like "Voltron II defends the middle universe". I was very, very disappointed to say the least. My friend had gotten hosed that Christmas too and ended up with the black gladiator so we combined them the best we could but there wasn't much else you could do with them. Mine broke early on as the grey hinge on his back cracked off.
I was much happier when I got my Vehicle Voltron needless to say. lol

I have seen the Matchbox Gladiator Voltron in a deluxe gift set too(I have a pic somewhere of the box) but the rumor is that it was recalled by Matchbox for some strange reason. I have no idea what the Deluxe set sold for originally.

Interesting tale. I too became obsessed that same year and asked for the Vehicle Force Voltron from my folks. It was just about all I got (you're right $75 was no joke in 1984 dollars). My first tastes of Voltron II came on the back side of the massive box my VV came packed in.
There is still talk even to this day of potentially bringing the Gladitor Voltron to the US for a dubbed DVD release. I would personally find that very interesting!

The series actually aired in Italy, in the late eighties/first nineties, and is considered lame by most viewers, although personally I didn't find it so bad. It revolves about three high school students who built giant robots to use them in robot vs robot competitions (it seems to be the in thing at the time, sheesh). Trouble arises when the alien Derringer Army from planet Deran comes to earth with the intention of invading it. The robots of the protagonists get trashed, but the resident professor, who hapeens to be the father of the only girl on the team, has the solution: three newly built robots that can combine into different modes and crash the various 'mega fighters' unleashed by the enemy. From there on it's an alternating of high school life with alien trashing. Not much originality on the plot I suppose, but like they said, it's not the story itself, but how it is told that makes it good. And Albegas really didn't stand out as much as its predecessros. But it wasn't too bad either.
Anyway, I was lucky to find one of these almost unscathed in Japan a few years back, and it is since being displayed at may family's mountain house. I agree completely with the review, the value (and fun) of this toy is its interchangeability.
I purchased its modern version by Evolution Toys this month, and I must say that they did an excellent job with the character, improving and augmenting the features of the classic, and at the same time maintaining the exact look of the anime. I really love both.

Albegas is getting a DVD release in Japan, so it'll be interesting to see the show (still need to see Dairugger XV).