Like many obscure toy lines of the eighties, the Starriors looked great on paper. The toys were Tomy’s attempt to scale its successful Zoids products to the American action figure market. While the Zoids were large, complex model kits of lurching mechanized beasts, the Starriors would be small, simple character-oriented figures. In collaboration with Marvel Comics, a needlessly elaborate and sprawling mythology was devised to provide a back-story. Here’s a taste, from wikipedia:

In the future, solar flares threaten all life on Earth. Earth's scientists build three Classes of intelligent machines, Protectors, to restore the Earth for human use, Destructors, to ward off any potential alien invasions, and Guardians to protect humanity after they go into a hibernative state underground. The brains of the Starriors, called control circuits, are crafted in the human image. The leader of the Destructors, Slaughter Steelgrave, becomes craven at the thought of deactivation upon the restoration of the humans, and enslaves the Protectors after what he believes to be a successful attempt to destroy all of the Guardians. Eventually, the human race and the Starriors' mission is forgotten as a reality and regarded as a myth - none of the Starriors had been activated when the humans disappeared. Then the Protector Trashor, Nipper, discovers a human skull. A band of Protectors, eventually joined by a few dutiful Destructors, sets out to release the humans from their overly prolonged hibernation.

So the story was maybe a little too nuanced for the target market. But amazing playthings can overcome such impediments. Were the toys any good? Ehhh.

Again, in theory, we’re on solid ground. The Starriors retain many of the features which made Tomy’s mechanical toys so great: motorized cores, interchangeable components, those beautiful jewel-like cockpits with tiny chrome pilots. But the results were underwhelming. The mechanical core gimmicks were wind-up mechanisms, which were a little hokey even in the mid-eighties. And they didn’t actually work very well, pathetically grinding through their motions in a halting, sickly motion. Played-with specimens barely function, and those freshly pried from a mint package only fare slightly better.

Additionally, the figures were hampered by samey designs, floppy riveted connections, bland under-detailed sculpts. But there’s something still which appeals to me. I like the design ethos, the bold assertion of Tomy’s pet fetishes. These aren’t fake Transformers, they are something unique and willful and dignified.

Now that I’ve used up the internet’s supply of 1’s and 0’s setting this up, let’s take a look at one of the damned things.

This is Cut-Up, a Protector and a Wastor. He’s undistinguished among Starriors, but few are. Some of the more deluxe released have more character. As is, Cut-Up is a competent, nice-looking bot.

The card and accessories are bare-bones. There isn’t even a name listed.. A small mini-comic is included. 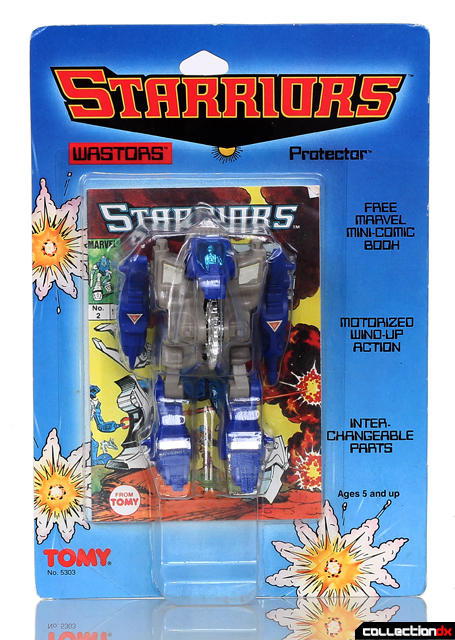 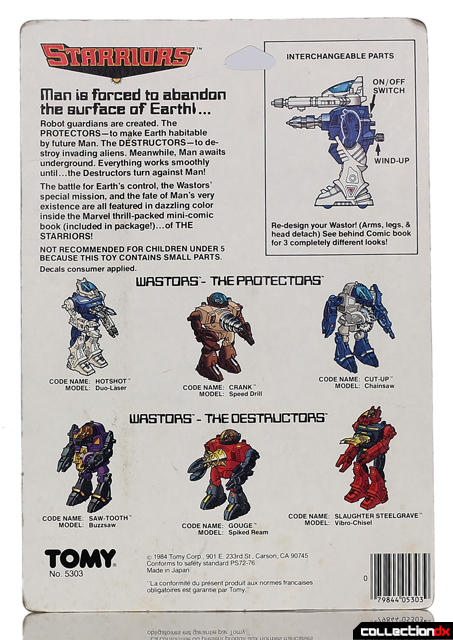 The figure itself isn’t as solid as you’d expect from its appearance. The knee joints are floppy riveted connections. The core feels unsubstantial. As I mentioned, that saw moves verrrry slowwwly when wound up and activated. I like the chrome though. And the cockpit. 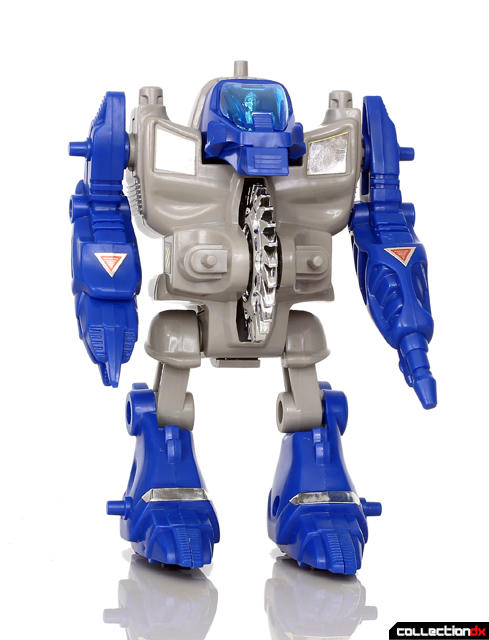 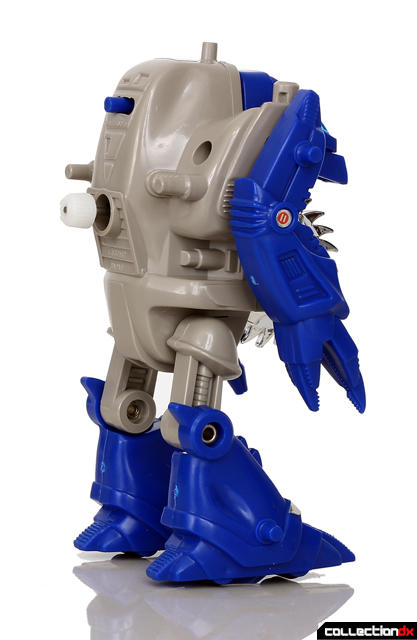 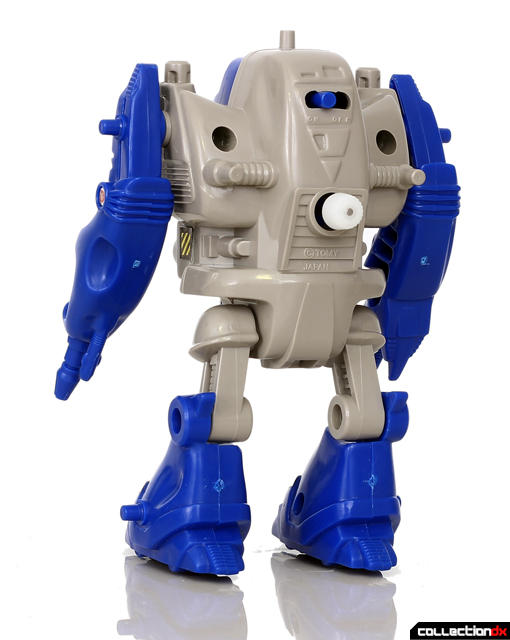 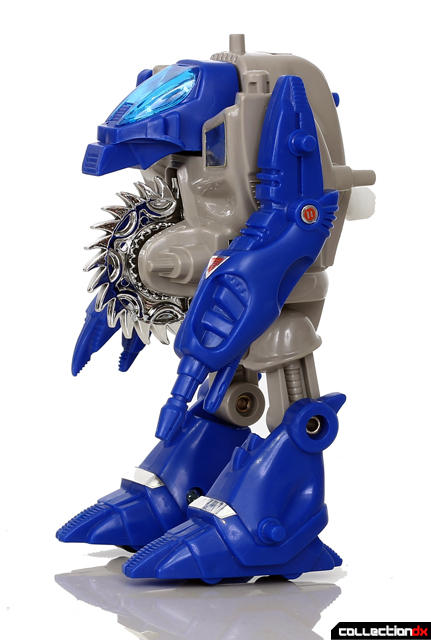 Articulation is very minimal. But this was never a posing figure, more of a playful kit of parts. 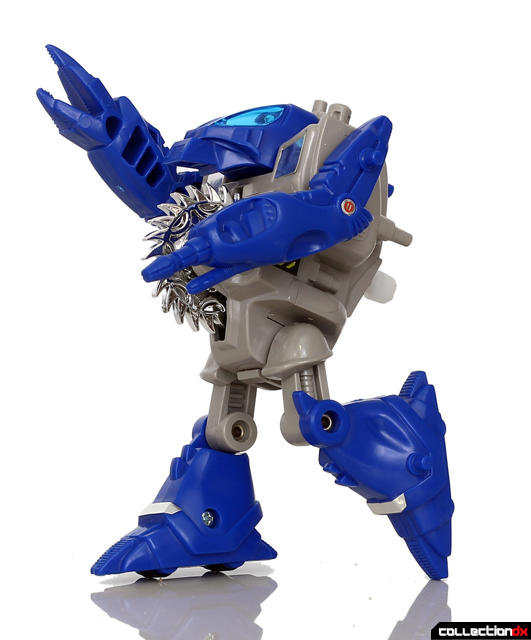 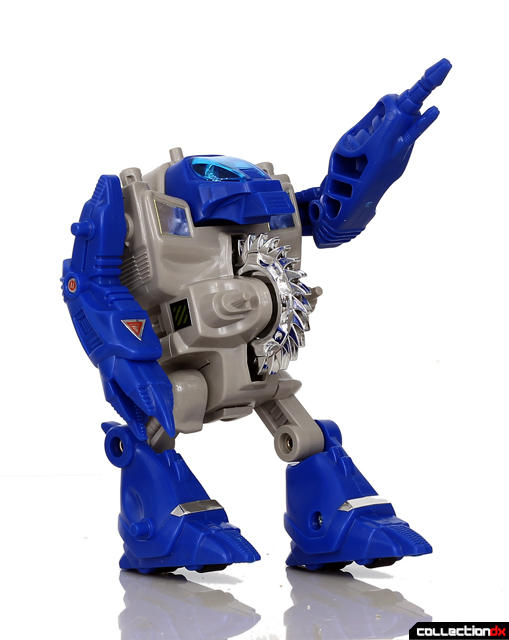 And here are those parts. 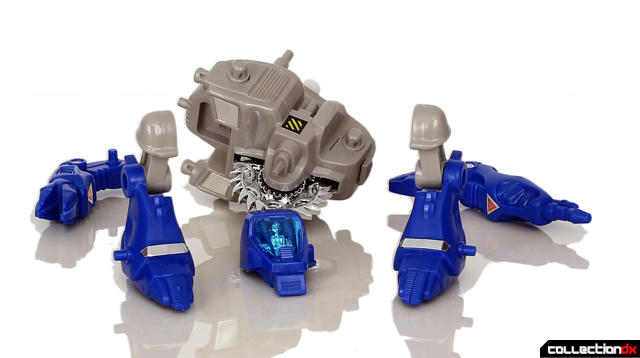 The whole idea was that the figures would be intermingled thusly. 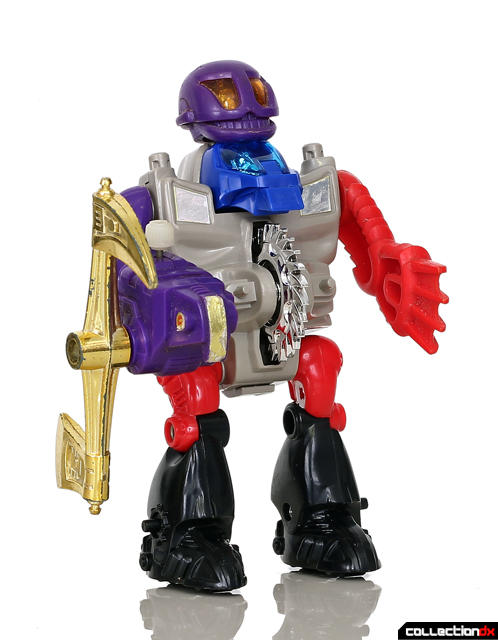 The interchangeable limbs (some of which are mechanized themselves) are fun enough, but the individual components aren’t distinguished enough to provide dramatic variations.

I may sound down on the Starriors, but I actually quite like them. I like the aesthetic, and the larger figures are more interesting (I’ll cover some in the future to demonstrate this). They definitely make more sense in a larger context than they do as individual pieces

2 comments posted
I had Crank when I was a kid,

I had Crank when I was a kid, and one or two of the Starriors comics, which I remember being surprisingly good. I was a little disappointed that neither ever took off.

I liked the toy well enough, but never acquired another Starrior, which limited what I could do with the parts-swapping gimmicks. Fast-forward to the current age, when I discovered Zoids, which reminded me of Starriors, but always seemed too fiddly for me.

I remember these! They grabbed my imagination quite like the Zoids line did. Whereas the Zoids were were all beautifully designed from the small wind-ups to the battery operated big boys, these were the poor relation. Fair bit of promise but badly realised !