Takatoku made some really great toys back in the day... Not sure if this is one of them or not.

The 1/60 scale Orguss toys are significantly smaller than their larger 1/40 siblings. The transformation options are now limited to two modes, but with that you gain more dynamic poses and a more "action figure" like toy. 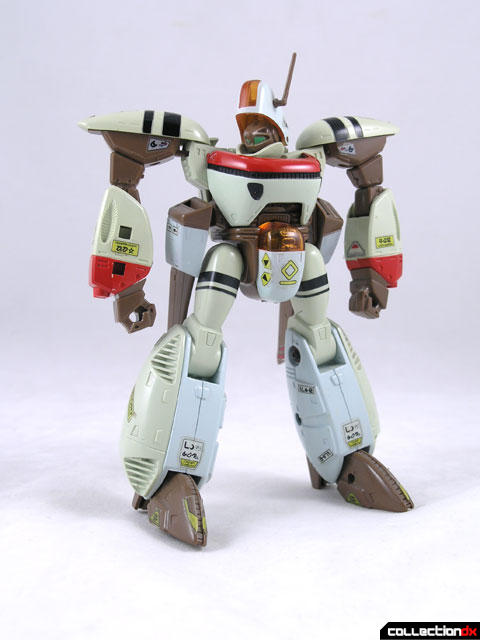 Super Dimension Century Orguss was the follow up show to Macross, and it had a lot of the same staff involved. It’s only natural that people who dig Macross also have an affinity for Orguss. 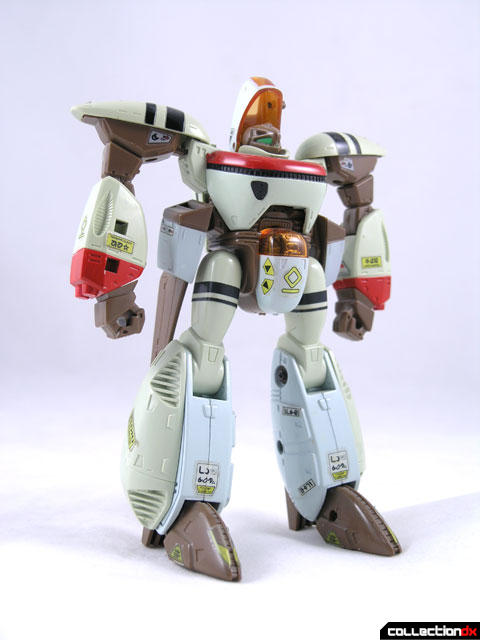 The show is kind of hard to explain, but a fighter pilot named Kei is at ground zero when a reality bomb goes off, and he ends up in a world that is a combination of two different dimensions. Kei is an oddity in this world. He is known as an “Idiosynchratic Point”, and both sides of the conflict – the Chilam and Emann want him for their own. The Emann convert Kei’s damaged Bronco 2 fighter into the transformable Orguss fighter. The name Orguss is a god of war in this alternate world.

The Orgroid comes in the typically beautiful Takatoku box, with its textured cardboard and detailed illustrations. A thin sheet of cellophane protects the toy from the outside world and is often seen punctured or torn on older specimens. 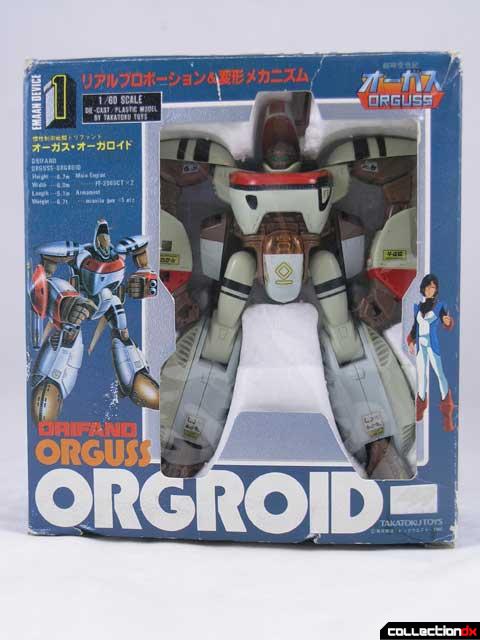 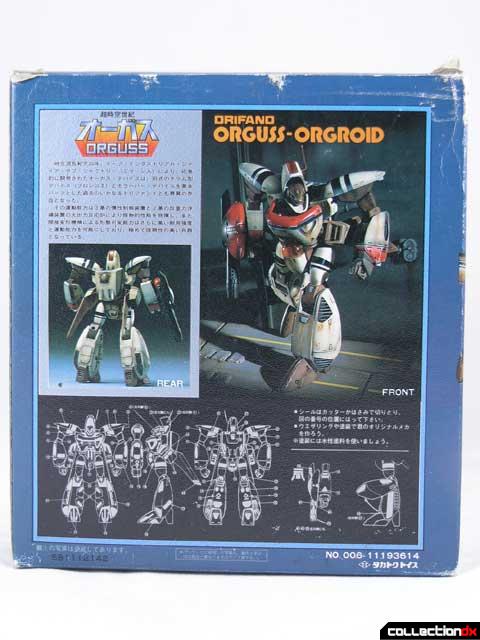 These old Takatoku toys were actually marketed as models, for you to paint and detail on your own. Check out the amazing painted version of this toy on the box. 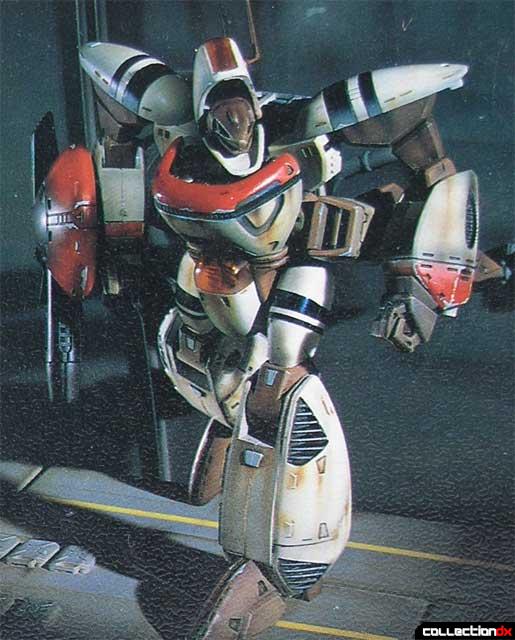 Although the Orguss has four modes (Orgroid, GERWALK, Flyer and Tank), this toy can only do Orgroid and Tank modes. 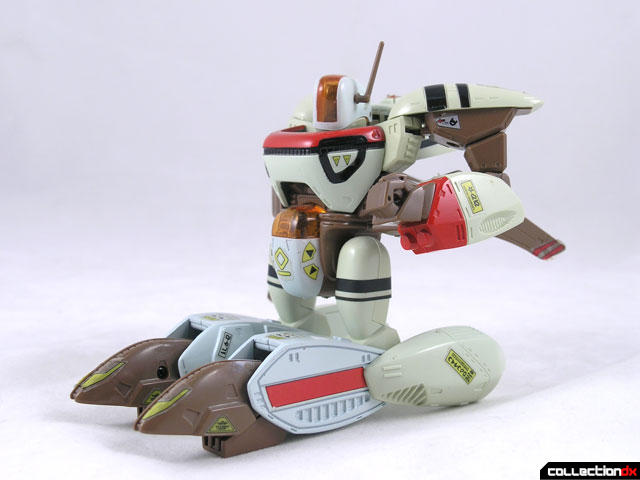 The toy is made up of a combination of diecast metal and brittle plastics. The feet and lower legs are metal.
The head cover is translucent and can open and close. 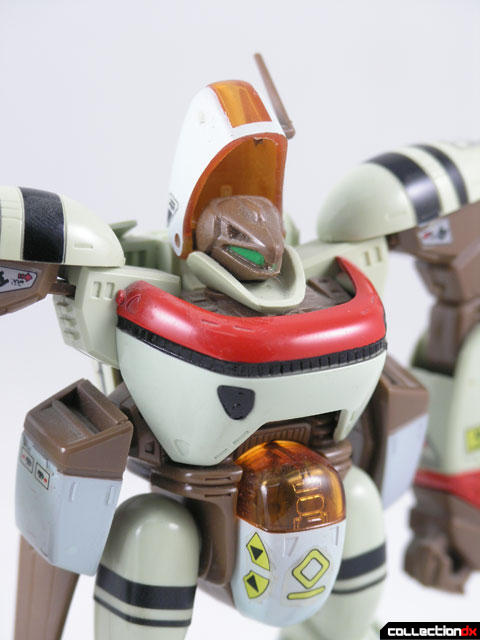 The chest panel is removable to reveal the inner mechanism. The cockpit bubble can also be removed. 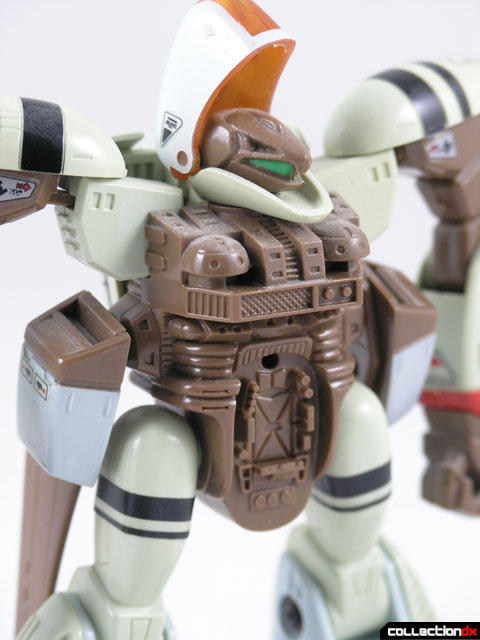 A gun attaches to the arm that can actually fire missiles! 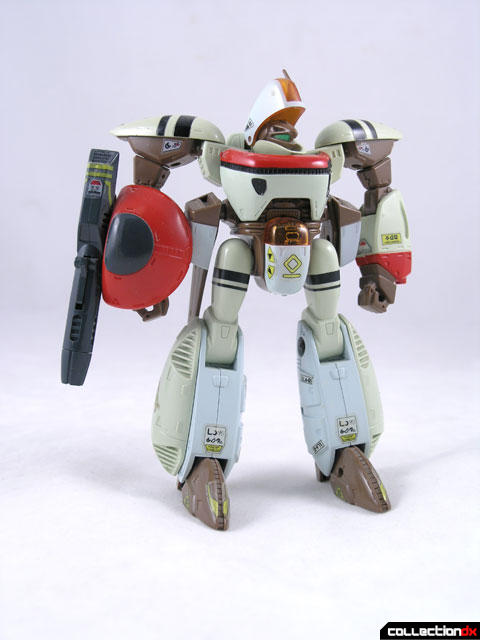 Also included were stickers and a catalog.

Unfortunately, these toys did not stand the test of time. Colors faded and plastic became brittle – the immense weight of the diecast feet caused them to break off from the lower legs. Joints got loose over time..

Still, I can’t help but love these toys. Maybe I am just nostalgic for a time long gone. I love the aesthetics of the Orguss world, and as fragile as these toys are, I have a compulsion to buy every one I get my hands on. 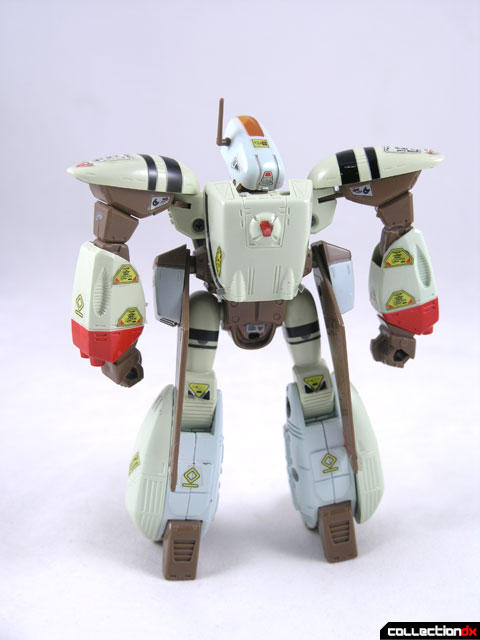 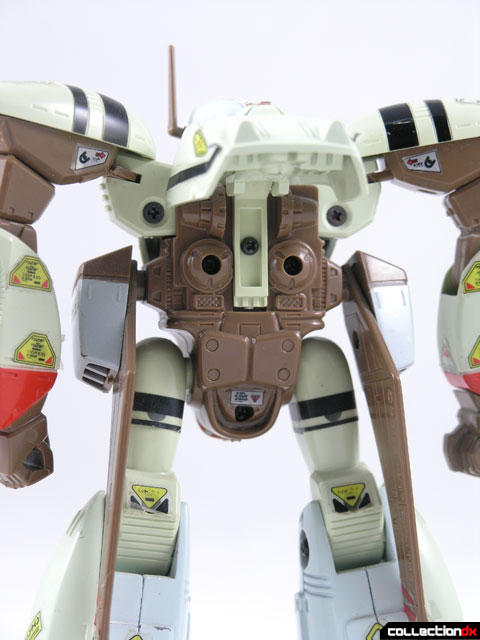 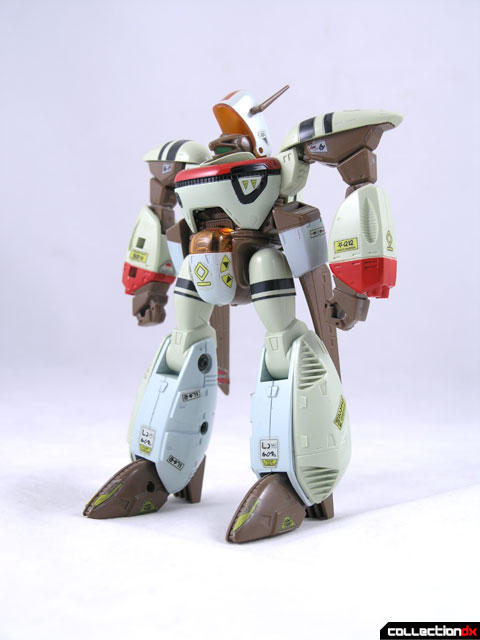 12 comments posted
And the moral of Orguss is...

...Mecha Pilots! Keep it zipped, lest your wild oats return to bite you in the ass!

I seem to remember having this toy as a kid (one of the few diecasts I had back then). Was it released in the US?

I can't speak directly to the 1/60, as I only have the 1/40s, but the Orguss Orgoid design is hands down my favorite in all of the mecha world. I know this will seem nuts to Macross lovers, but the Orgoid ( My Olsen Special is the only mech toy I will never sell) is a much more beautiful design then the Valks. I know I know...but its just personal design preference.

I have used its image on many of my design presentations through the years at work, (first time in 1991) and many people always make note of the design..people who are not even into robots or toys.

Adam I have the box set of this if you are interested.

I was *extremely* impressed with the 1/40 Orgoid when I got my hands on one. Josh is right; in a lot of ways its an even better toy than the 1/55 Takatoku Valkyrie, perhaps spoiled only slightly by fragility concerns.

Josh F.-
Even though I've only seen a couple episodes of the show,I agree the Orgoid is a better looking mecha than anything in Macross. I'd go so far as to say it's my favorite "real robot" design,maybe second to the red Gundam from Gundam Seed Astray (manga series).

Josh B.-
That is a badass new avatar.

I always liked the transforming Orguss mecha here; my only protest was ever that hood over hits head in Orgroid mode.

and were found in discriminating hobby shops and the more peculiar variety stores that seemed to vanish by the late eighties. I once found a bunch of Takatoku Orguss toys in a warehouse sized gift shop in Myrtle Beach, MD, right next to a stack of Arii Macross kits (tearing up) I think it's safe to say the company bringing all this cool stuff in was the same one importing the jade Chinese dragons and buddha incense burners. God bless 'em!

I used to have the smaller version of the Toy as a Kid. Down here in South America we used to get some pretty cool toys back then (20 + years). I got Gardian toy too. Now we don´t get anything unless import from US or Asia. I thought this toy was a cheap version of Macross, cause I really wanted to transform them into Jet or Walker. hehe, nice to see it here. The site Rocks as well as all the cool robots it features.

I just saw that this was the most viewed item today, for reasons that are never clear with most of the toys that show up in that category. This one made a little more of a connection.
I'm at the point where I'm trying to get rid of a lot of my stuff, for a number of reasons. Basically I'm operating under the idea that, "If it's not sentimental or a grail item, it's probably going on the auction block". My 1/40 Orgroid is neither of those things, but there's something about the design and construction that I love. The blend of plastic and diecast is just right, and it feels much more playable with than any of the old Takatoku Valks I've come across. Even so, I'm readying a next round of auctions to go up this weekend, and the Orgroid was most likely going to be part of them, and I was sort of readying myself for that. And then I saw this review linked on the front page, clicked on it, and well, I think the Orgroid is sticking around for a while longer.
There's no real point to this story, and I don't know if keeping it is better or not in the long run, but I have a weird feeling of gratefulness right now.

Was looking up this series again, and I'm quickly reminded that the Orguss Orgroid always looked like a half baked design. But that early 80s aesthetic always draws me back; still can't bring myself to buy one though. Was considering the new Megahouse version, but it's priced even worse than Arcadia's current offerings.